The usual dog walk to start the day. We put in about a mile and everybody took care of their business. I went online when we got back and booked a flight home for next month using miles I’ve accumulated on my credit card. Now I have to make some medical and dental appts. and then set a time up with the tax guy to get all that done while I’m there. Talked to PJ on the phone and got her input.

Since I was going to meet a friend from the meeting last night at five to go to Puerto Vallarta for an AA meeting, I figured I’d take the one o’clock shuttle into town and kill some time by getting a haircut. I was cutting things close taking the dogs for a quick potty break before locking them in. I walked by the new RVers, Julian and Hildy and Julian wanted to pet the dogs. He’s got a pair of German short haired pointers at home and needed some dog love.

The clock turned over one o’clock as I was walking to the office. Joaquin had just left but Paty called him on the phone and he came back to get me. He was driving the stake bed truck. He wasn’t shuttling guests, he was doing other errands. I hopped in the truck and we set off, first stop being the bank to refresh the wallet. It feels more legit cruising around town incognito in the old truck rather than the minivan with the hotel logos all over it. 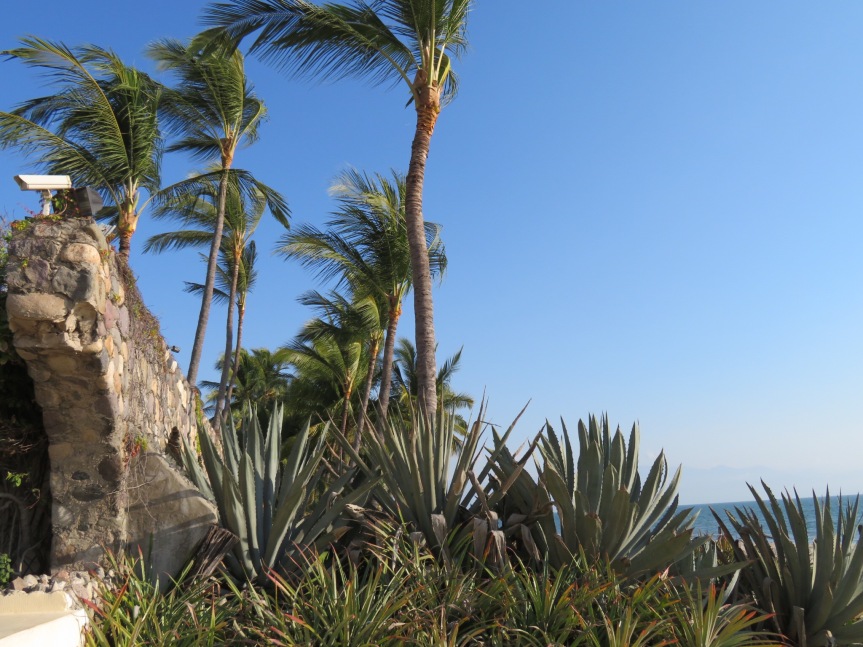 Joaquin took me by a friend’s salon but this being so close to Christmas, they are really busy. Fer made a spot for me to get a haircut tomorrow, then I set out to find ways to amuse myself for the next three hours or so. I was walking down the beach road towards the plaza when I saw the sign pointing down to the beach advertising Karen’s Place, a restaurant that a couple of the ladies at Los Arroyos keep raving about. I decided to give it a try and spend some time having a relaxing lunch.

I settled in on a beachfront table and ordered up a Karen’s Club, a sandwich on a skewer with some fries. The waiter spoke perfect English but wasn’t very personable. I’m not sure what the old French hippy behind me said to get him going, but I heard the waiter asking him if he realized that France and Mexico fought wars not once but twice and that Mexico had won them both. I’m not sure on the twice part, I’ll have to spend some time boning up on my Mexican history. I took my time eating, taking small bites and chewing 32 times. I forget where that one came from but I figured I’d just eat slowly and mindfully and take advantage of having a shady comfortable place to sit.

I was feeling a little out of it and a sense of overwhelming fatigue. On the beach out front, they had plastic chaise lounges in a roped off area for the hotel guests. I paid up my bill and went out and pulled one into the shade of a palapa and tried to get comfortable. Most of the chairs were broken and sagged in the middle. I found one that just had a bump where the hinges met for the seat back. Super uncomfortable chairs but better than sitting on a block wall in the plaza. I even managed to doze off a little between breathing the cigarette smoke and enjoying the boom box music of the hotel guests.


The napping did the trick and I was feeling much better as I hit the bricks again at about four. I walked down to the arroyo where I’d seen a ball cap at a vendor stall that I liked. My hair was funky so I figured a hat was in order. Half heartedly haggled with the guy and put the hat on. With the peso exchange, prices are so ridiculously low and the vendors need to eat. It doesn’t feel right going all hard core bargainer when the hat’s already dirt cheap. I walked around the back street for a while looking at houses and making mental notes of what shops and businesses are there.

Soon enough it was five and I headed down to the arroyo to meet my ride into Puerto Vallarta. The traffic was fairly busy and it took an hour to get into the city. We took a periferico that bypassed the tight cobblestone piece of road along the malecon. It will be a much easier way to continue south with the motorhome when the time comes. I learn more about getting around every trip out of the house.

I was tapped to speak at the meeting, so I gave a 20 minute talk on my experience getting sober and how my life has changed since embarking on this way of life. It’s always good to remember where I came from. Going from the days living in my car to experiencing all the travels I’ve done sober, learning to be myself, going to college, discovering a job that perfectly fit my lifestyle and personality, marrying the perfect girl and now being retired and searching for that tropical haven to hang our hammocks. Life is good. Hey, maybe I should put that on a t-shirt.

There were about 20 people there and most had a chance to share. There was an artist there that PJ and I had met at a meeting in Santa Fe, small world. Fun to see him and catch up. A young lady came up to talk afterward. She’s going back to school and was encouraged by parts of my dialogue. We left around 8:00 and my friend needed to pick out a Christmas gift for his wife, so he stepped into a jeweler while I sat on a bench outside and called my sister and then a friend at home.
Made the drive back and got dropped off at the big iron gate where the night watchman let me in. The dogs were happy to see me. Eight hours without a bathroom break. They do really well. I guess it shouldn’t surprise, they go all night maybe twelve hours. Still, I try not to leave them too long. The dogs and I toured the campus then came inside and called PJ to say good night then typed up this post.