The alarm sounded at 6:00 am yesterday morning and we loaded my stack of suitcases into the trunk of Dad’s car. Sandy drove and the traffic was moderate allowing us to arrive at the airport with plenty of time to get checked in without rushing. The nervous looking check in clerks at the Alaska Airlines counter were being watched over by a harsh older woman that reminded me of Nurse Ratchet in One Flew over the Cuckoos Nest. Cold, hard and no giving an inch. The poundage for baggage has dropped down to 50 lbs. My monster bag weighed in 12 pounds over. I started jettisoning excess cargo overboard and got it down to 52. Not enough. She wiggled it around on the scale to get it to show more weight and smugly watched as I threw more of our belongings to the side. Luckily, Sandy and Dad had come along this far and were able to take some of the excess with them. The plastic tube of fishing poles became baggage item number three and well, the third item is always $75 dollars. For real?! You already burned me for $50 and you can’t just let this little thing go at standard cost? The poor lady next to me with a dog was getting hammered. If the battleaxe suspected that one of her underlings down the row was giving a customer a pleasant experience, she quickly ran over and made sure to put a stop to any positive customer relations. I was able to move a few items over to my carry on and we went over to the food area and ate breakfast sandwiches. Dad and Sandy, I can’t thank you enough for being there through the whole three weeks. Much love and appreciation. 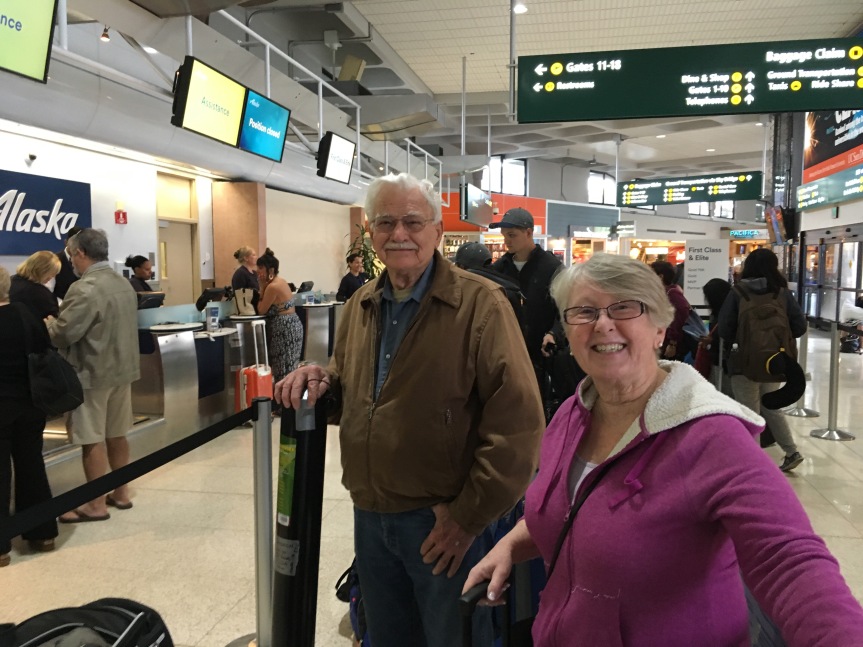 Said my farewells and got in line at security. Both of my bags got pulled for suspicious contents they had viewed through the x-ray machine. The agent was friendly enough. He gave my little bag of Zots a fondle, then rubbed them with an explosive detecting wipe to be sure they weren’t a bomb in disguise. Then he scored when he came upon the large jar of Skippy peanut butter in the carry on bag. Peanut butter’s a liquid and had to go. I should have figured on that one but on the big shuffle at the check in counter, I wasn’t thinking that quickly. I asked if he could at least pass it on to the food bank, he said no and it made an unceremonious thunking sound when it hit the bottom of the trash barrel.

Finally through, I found my gate and it was swarming with people piling on. It was JP’s fortieth birthday and he was dragging around 44 of his pals down to PV for the big blowout. You could tell the members of his crew because they were all sporting the same caps. I saw Debbie, who I had met at Lupe’s Christmas party boarding the plane. We talked for a few minutes then I settled into my seat next to one of JP’s party bros and the girl with the dog who I saw being harassed was sitting at the window. Everyone was really friendly and I found myself having multiple conversations with different people rather than my usual bury myself in a book travel style. One of the stewardesses even got in on the act and was modeling one of JP’s party animal hats by the end of the flight.

Customs was a breeze. Easily got another six months, no questions asked then collected my pile of luggage, got the green light when I pushed the button and rolled out into the lobby where PJ and Joaquin were waiting for me cheering and holding up a welcome home sign. Wow, what a feeling of relief and peace to be back in Mexico where I’ll be able to take it easy and heal up. 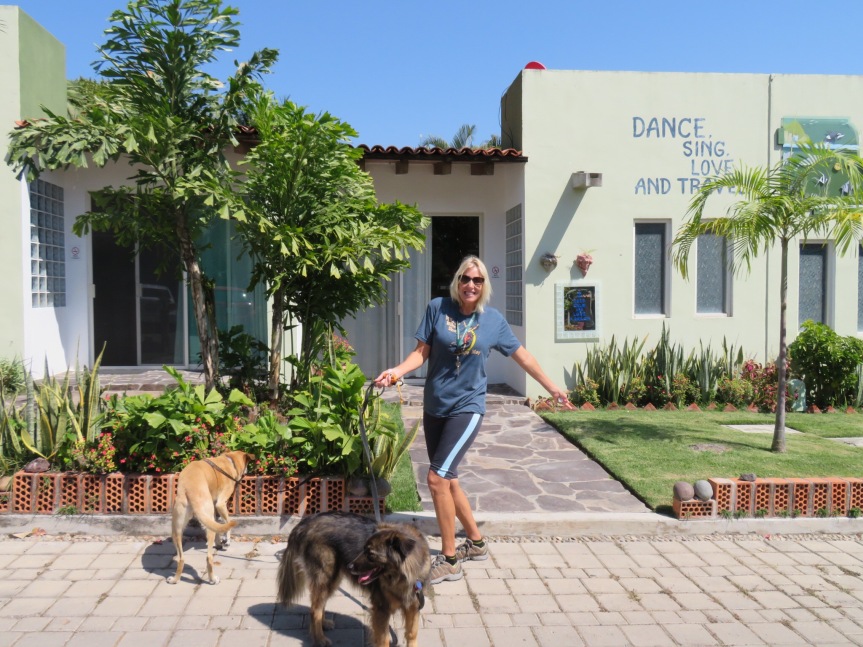 We are now in Casa Tamarindo, a little one bedroom casita near the front office. It’s a cool little layout with a back patio that PJ has fenced in with chicken wire to keep the dogs from investigating the cats that live two doors down. My hearing is pretty poor in the right ear, maybe 15%. I was hoping for more but it should come in time. There was some drama about PJ having my arrival time wrong and the shuttle being gone too long for an airport pick up. We’ll fix it up with the office later on. Went in and slept most of the rest of the day and all night. Must have needed to catch up.

Today was an easy day. Rested and walked dogs. We went over to the RV and got a few things I needed and checked out PJ’s fencing and yard set up for the motorhome. Unpacked our bags, opened gifts from home and Pamela did a little fashion show trying on the cool, new clothes her sister had sent down. I met a few of the new neighbors, but honestly just wanted to isolate and take it slow.

PJ cooked us up an awesome dinner of garlic sautéed shrimp she had picked up the day before at the fish market. Steamed carrots and rice rounded out the meal. In the evening, we walked around the compound and stretched our legs a little bit. 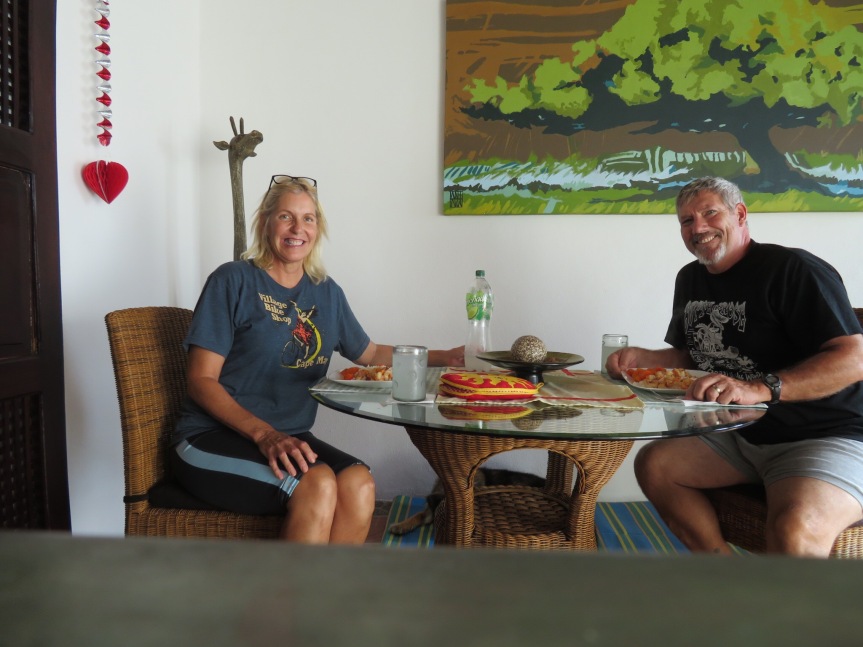 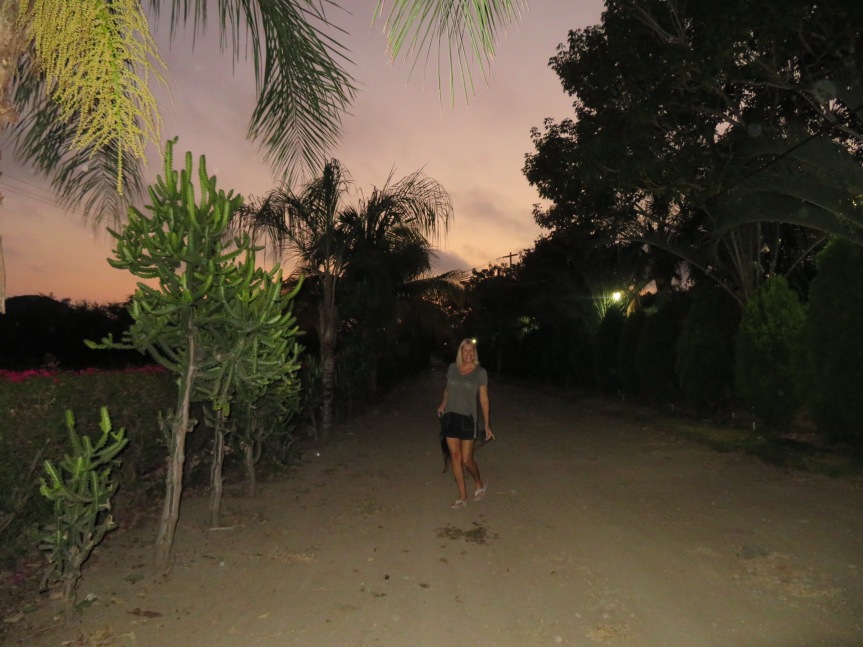 4 thoughts on “Back in Bucerias”