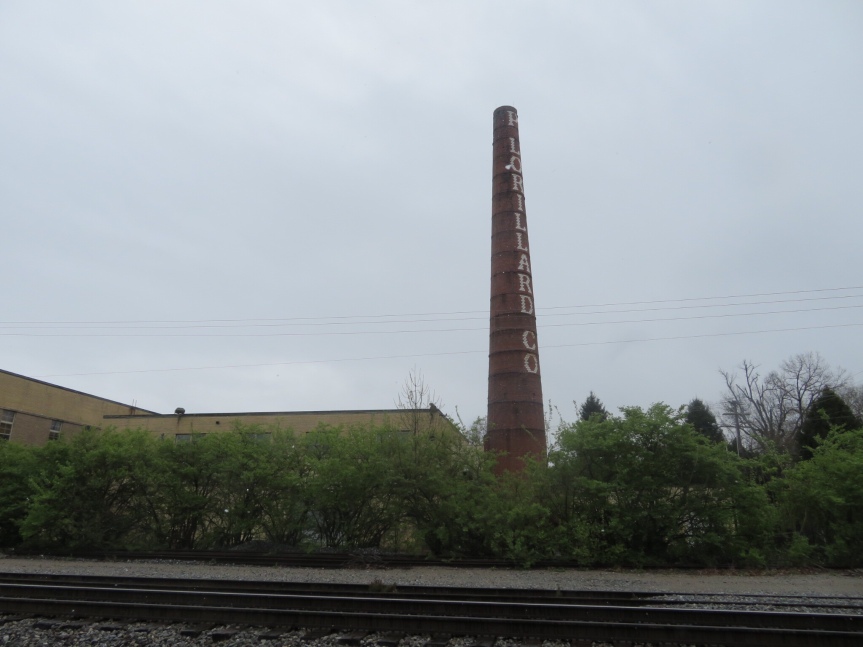 The alarm woke me up at 6:45. I took Cali out in the 34 degree cold to walk around the neighborhood. Rain had been falling off and on since the early pre-dawn hours. It had slowed to a steady drizzle as we shivered in the unusually inclement weather. This is two days that she hasn’t been able to go. Joe and I went to meet some friends for coffee then he and I headed over to the waffle house so I could get my order of grits for the trip. Good, simple breakfast then back to check on the hound. 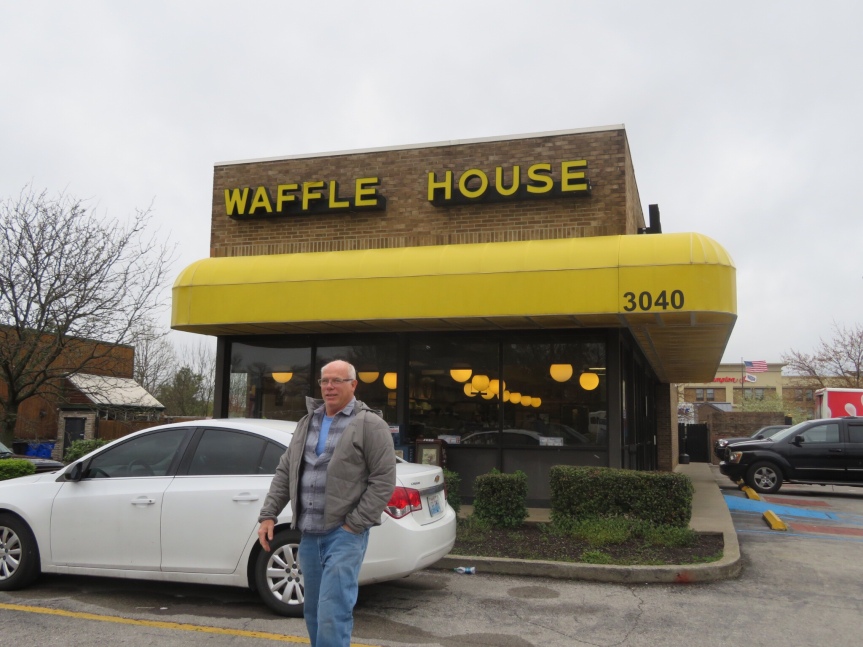 The snow was blowing through in flurries as we drove back to Joe’s. A small bit of white was accumulating on the ground and the wind added a little extra sting to the 36 degree overcast day. Cali had roughed up a few things in the RV and pulled down the privacy curtain on the front windows. I took her for the mega walk under the overpass where the homeless guy lives in an old trailer. It had the best stretches of open grass along the railroad tracks. We walked and walked still with no success so I decided to take Cali to the vet before she gets impacted or has some other more serious issue. Joe got a referral from one of his friends. I called and we were able to book an 11:30 appt. at the VCA Woodford veterinary clinic. 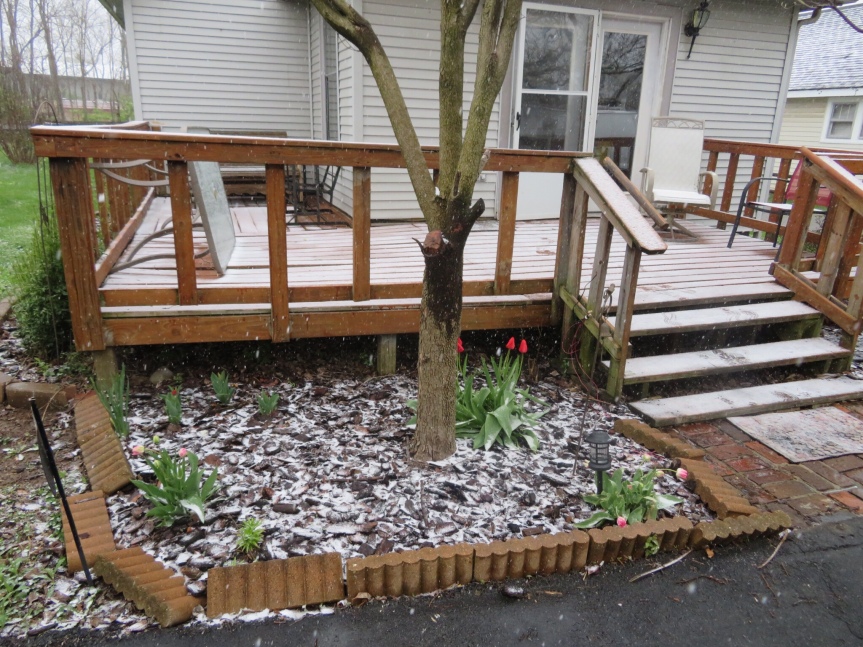 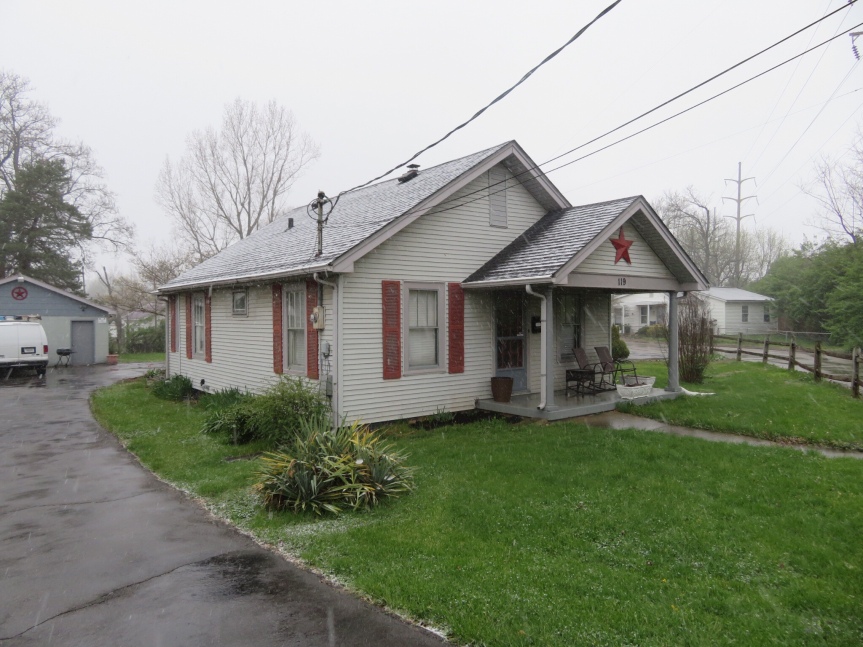 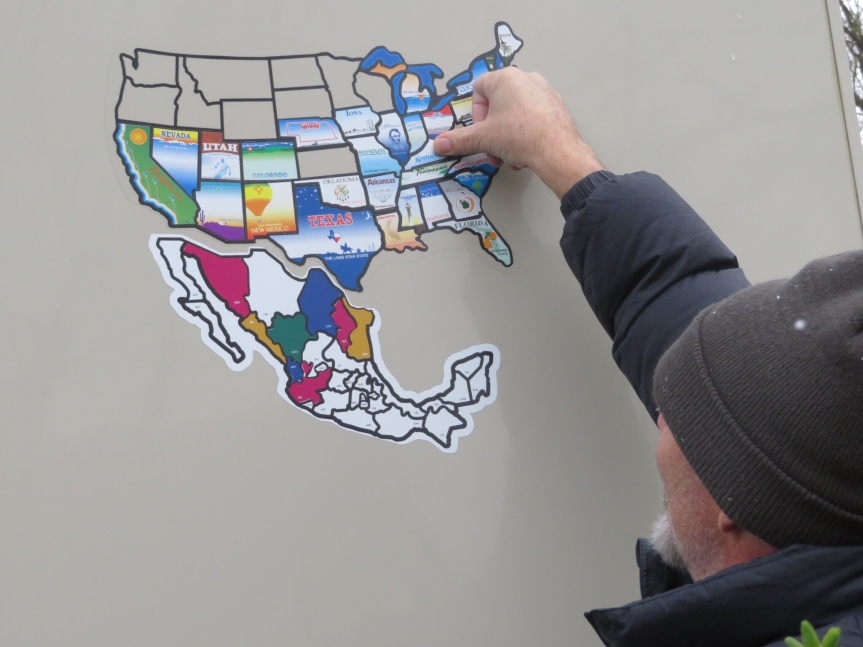 At the clinic, I gave the vet the run down on Cali’s history. She was a competent young woman maybe early thirties. Dr. Campbell was thorough and suggested an x-ray of her bowels and a series of blood tests. I consented and sat on a hard little triangular bench in the corner of the small exam room waiting for the results. Joe, bless his heart, sat out in the waiting room reading a book until too many people came in bringing too much activity to the space whereupon he went out and sat in his truck. The vet came back and a few of the kidney markers were a little high. She wanted to run some IV fluids to rehydrate Cali. They had manually extracted some hardened ‘pellets’ from Cali and the x-ray showed normal bowel contents. They wanted to keep her overnight on the IV, but I thought that might freak her out too much. The vet then suggested just doing the IV from that time until they close at 8:00. We agreed on that and a tech came and took Cali to the back. 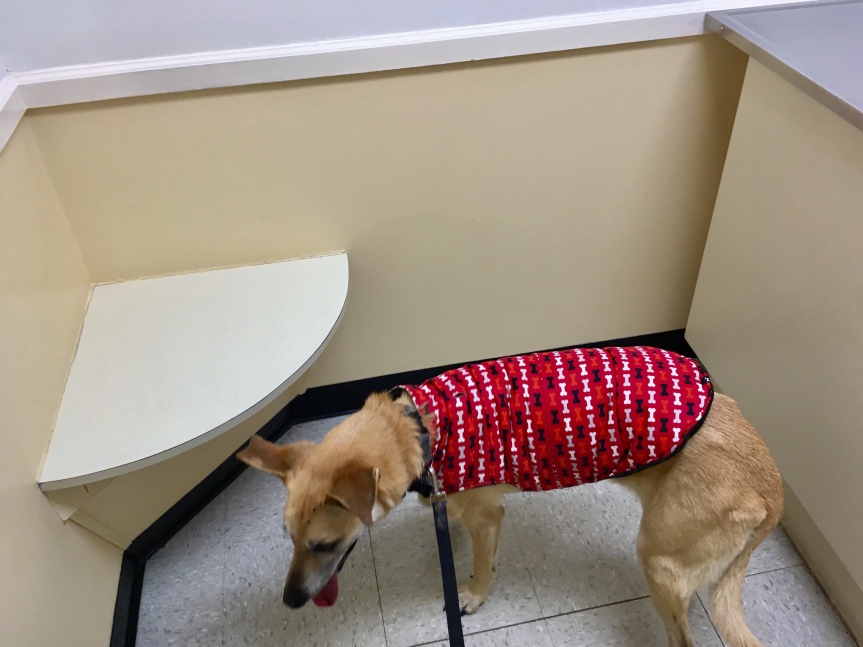 Joe and I set off to run some errands and do an electrical job he had lined up over at a beautiful ranch where they raise million dollar horses. First we passed through the Aguascaliente Mexican barrio where we stopped at the tortilla factory and ordered up some carne asada tacos. Surprisingly authentic Mexican food for the heart of Kentucky. 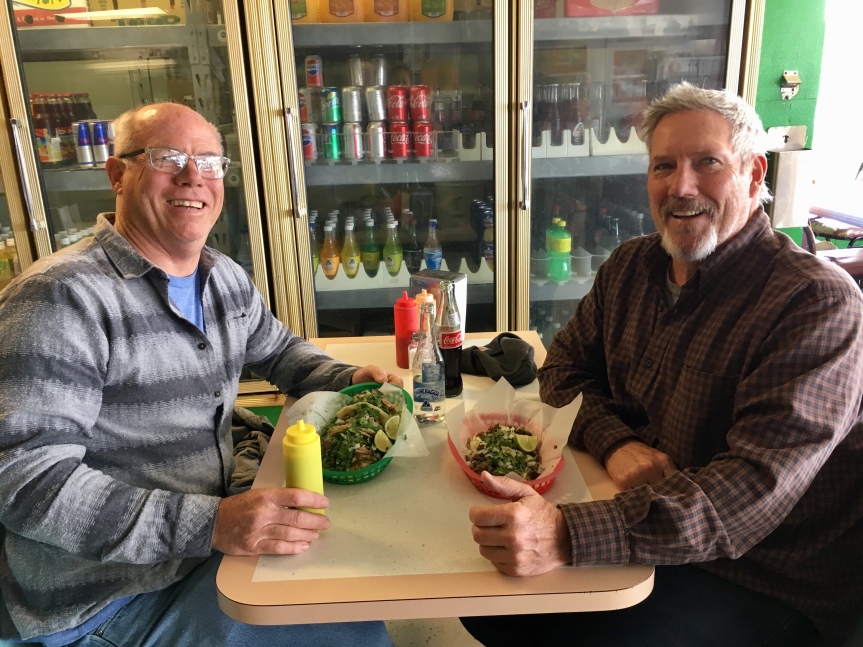 From there, we stopped at the electrical supply house where Lisa works to pick up the ballast that Joe needed for the ranch project. He flirted with his gal while I took lip for being from California from some redneck contractor while sitting at the counter. Lisa had a bag of gourmet cookies for Joe and I which we munched on as we left the shop. Next stop was Joe’s mechanic, Ali, who diagnosed the tapping sound from the front of his van as coming from a relay for the heater. He got it to stop and that’ll be a project for another visit. Next we dropped in for a quick visit with the wood workers who are fabricating Joe’s burl kitchen bar. Lots of beautiful Kentucky hardwoods being crafted into all kinds of artsy home furnishings. 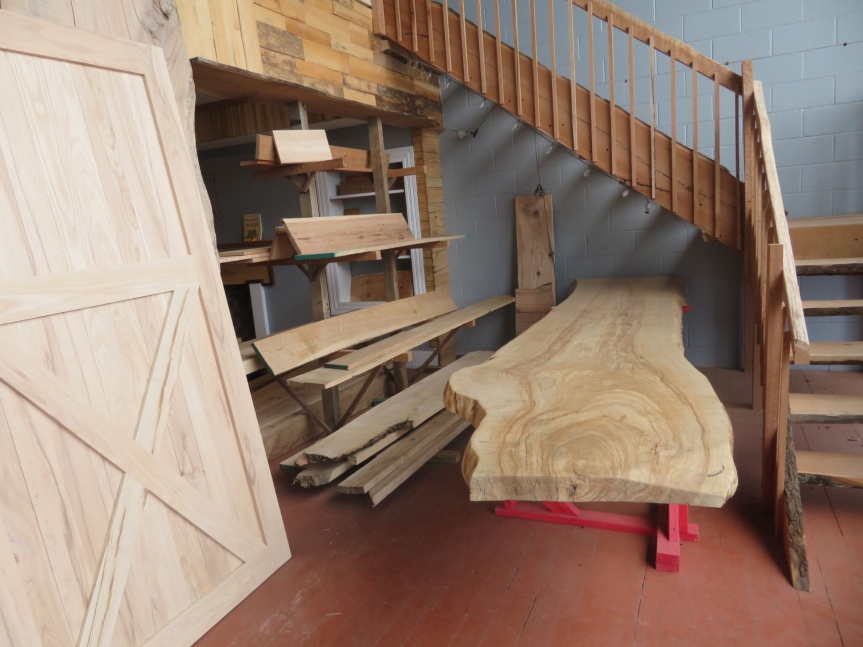 We barreled down these narrow, shoulderless country lanes until we reached the large hacienda where we to repair the faulty light fixture in the horse stables. The owner was in the large chicken enclosure sitting on the step of the coop holding a chicken upside down as she inspected its belly for mites. A rambunctious Australian Shepherd came bounding over and jumped up to lick me in the face. Joe got to work on the light fixture while I semi-helped but mostly wandered around taking pictures and petting horses. The job was quick and easy and the owner came over with a dozen fresh eggs in various shades of browns. She found an egg carton, boxed them up and sent them home with us, Beautiful spread of pastures, barns and open fields. 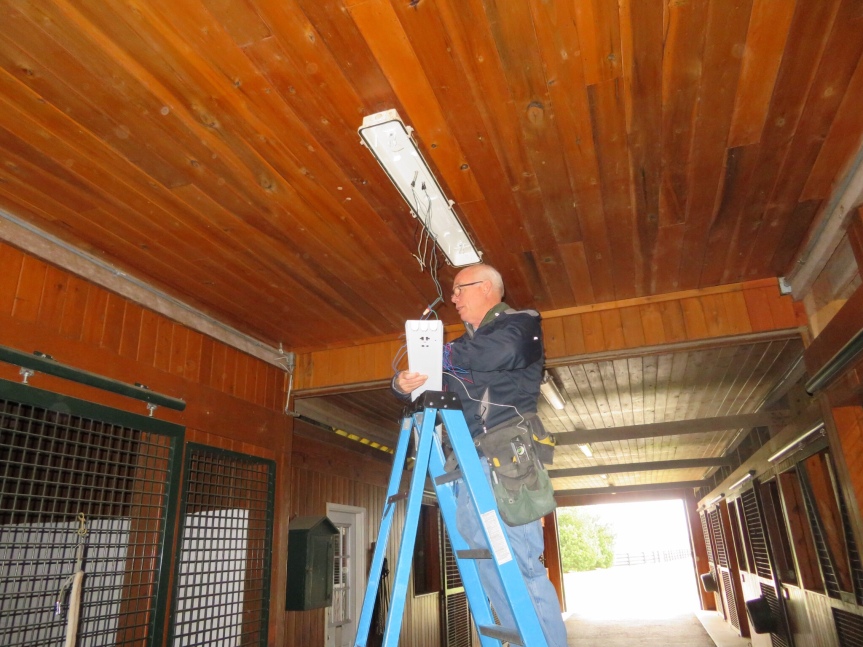 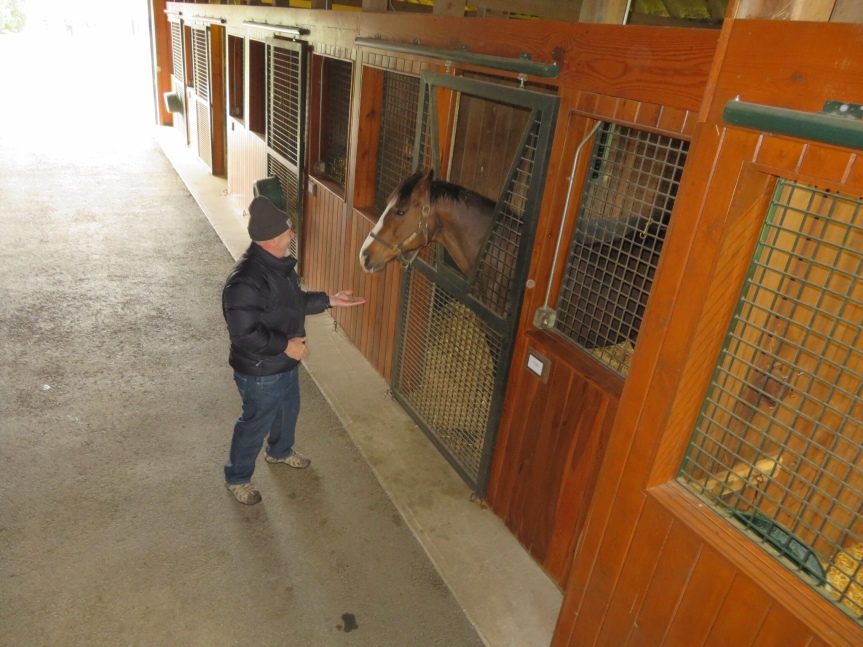 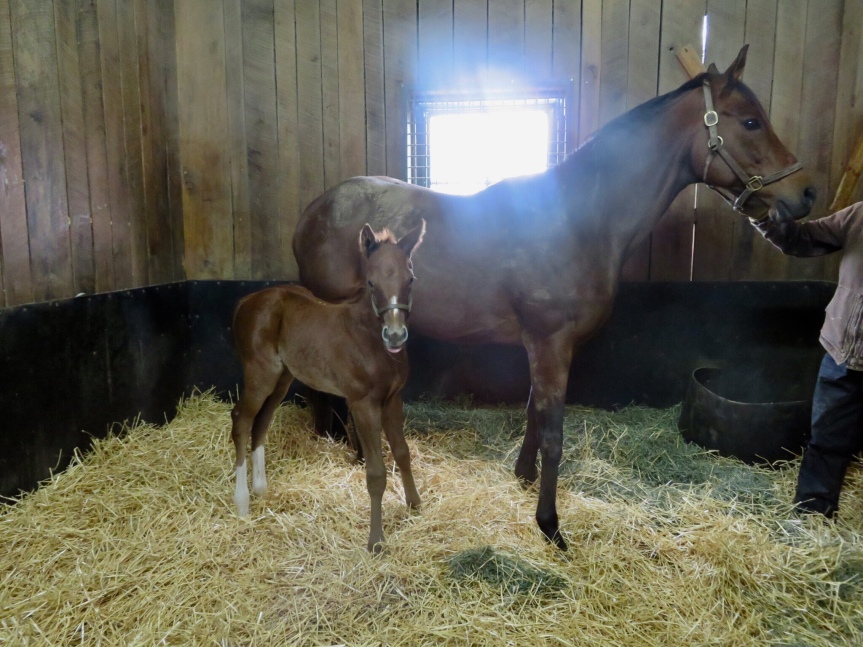 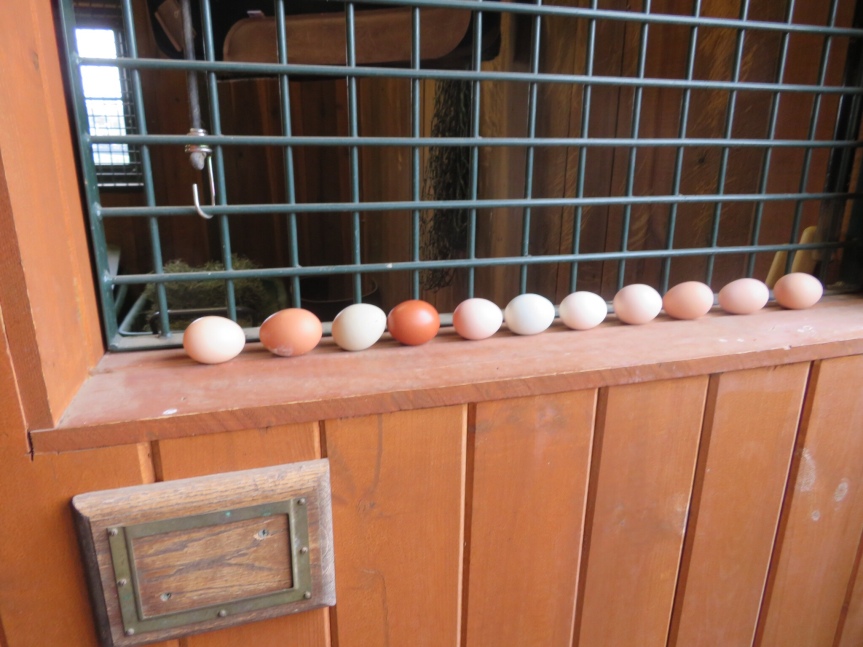 Fresh as can be 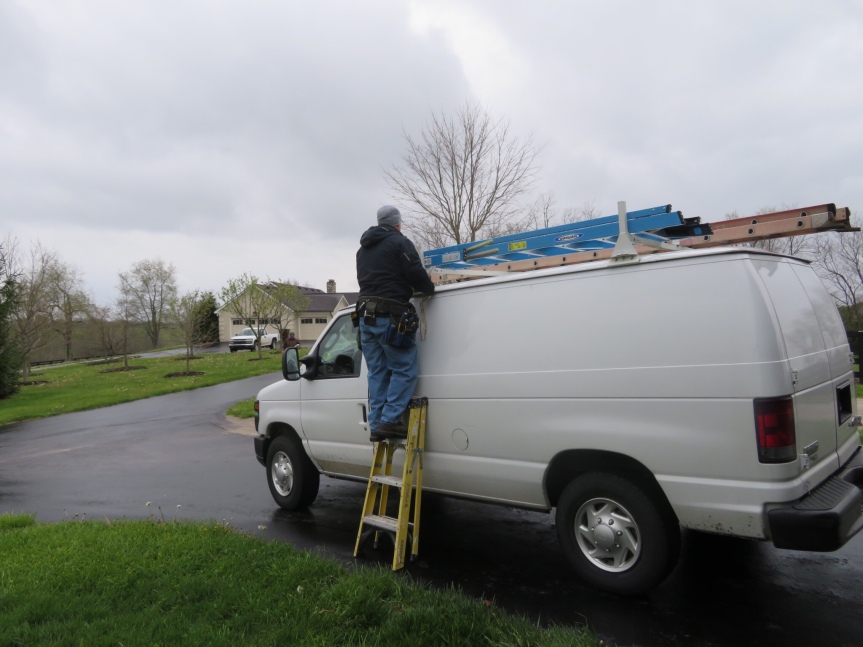 We zipped down some more narrow country lanes and stopped to have a look at the Pisgah Church, an old stone building from the 1700s. We got out and walked among the old headstones some of them belonging to veterans of the Revolutionary War. It was so bitterly cold that we couldn’t hang for long and we drove towards home stopping at the RV store to pick up the little clips that hold the cargo bay doors open so I can install them for the electrical bay and the door for the tire compressor. Then it was back to the house for a bit of rest time. Snow just keeps on falling blowing quickly across the landscape before disappearing even more quickly than it came. 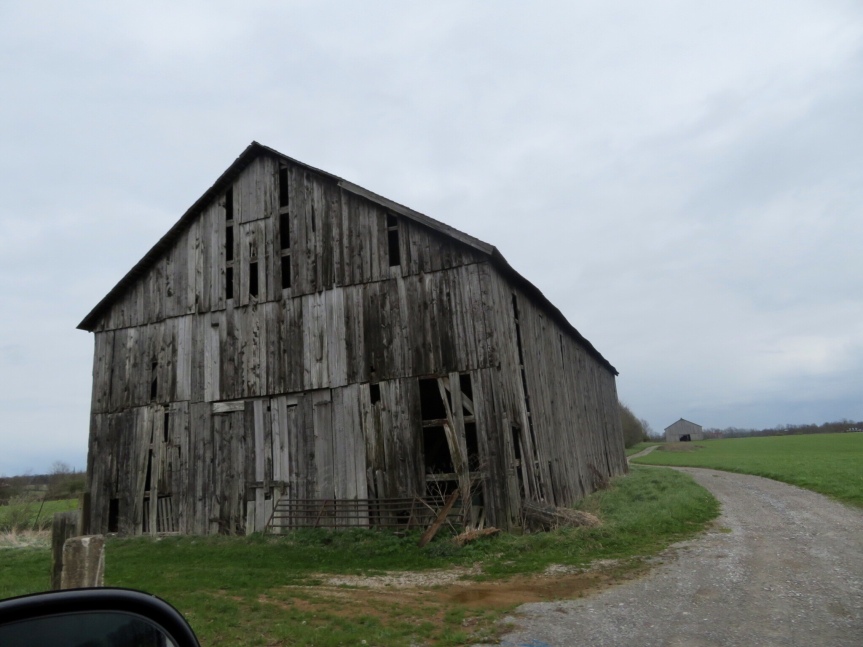 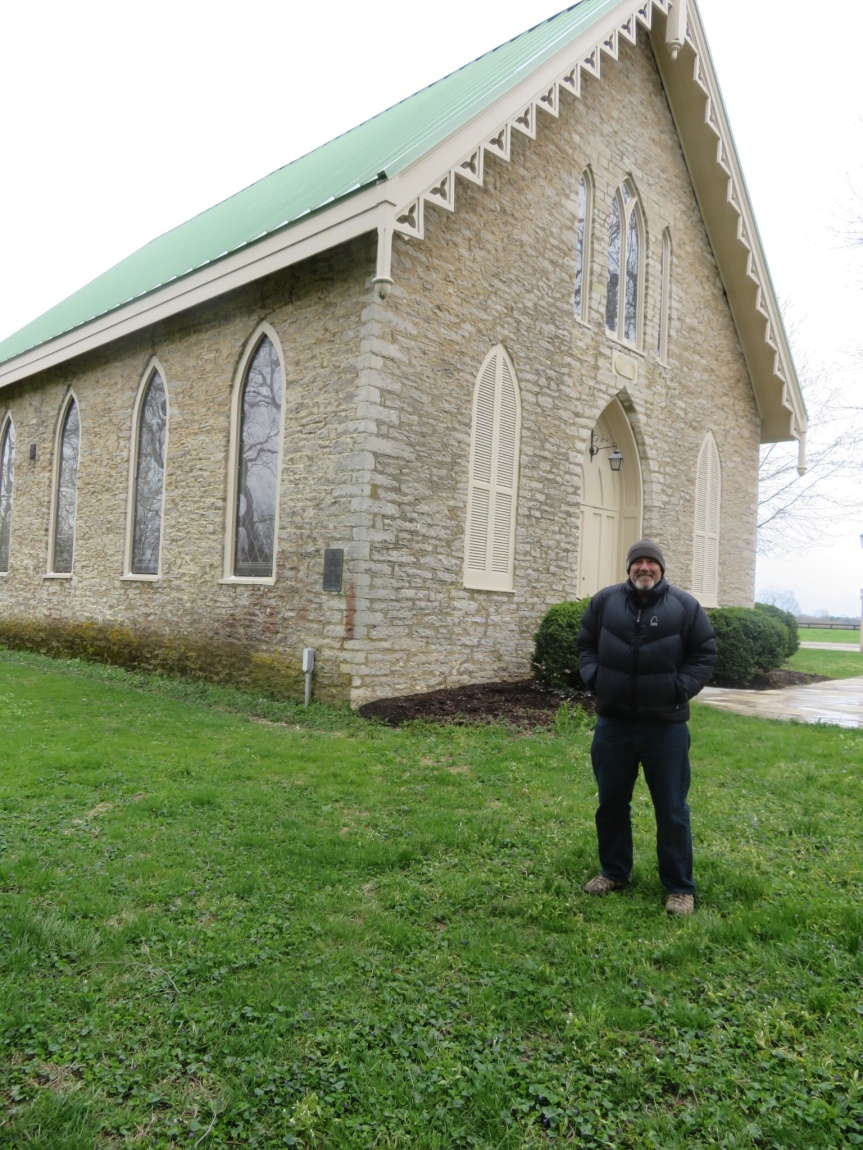 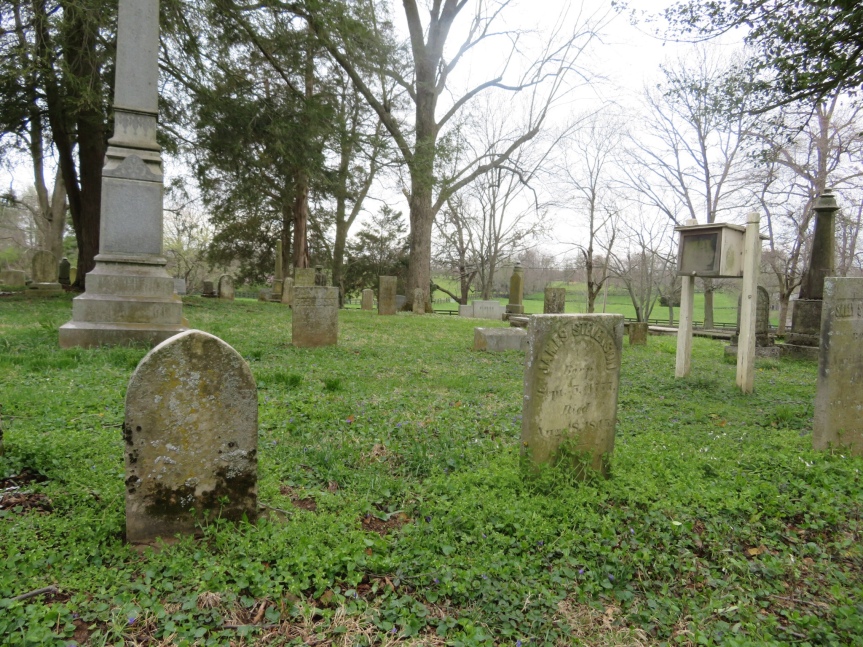 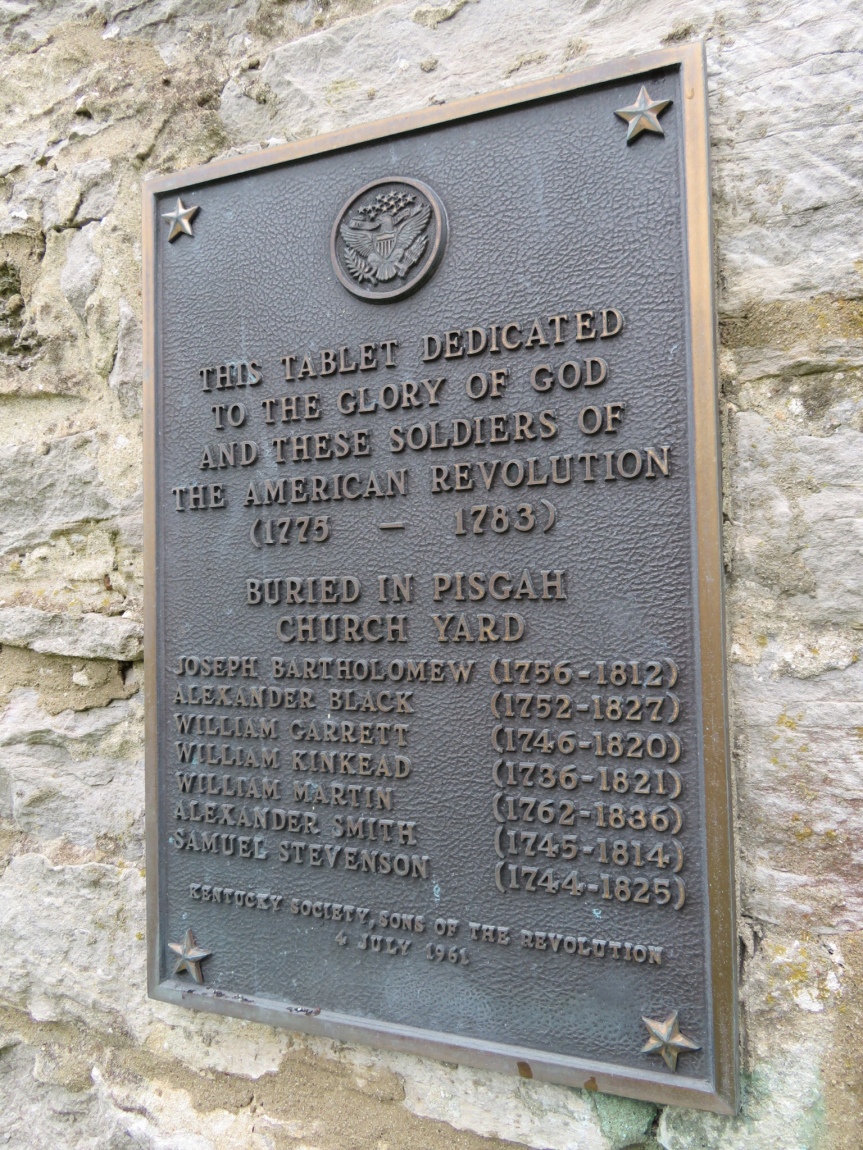 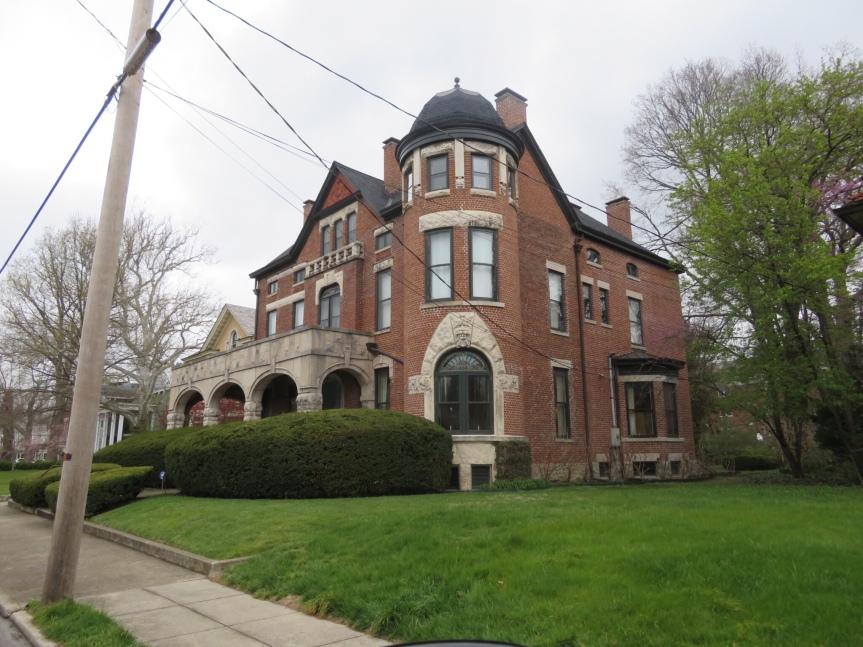 At 7:00, we headed back over to the vet and picked up Cali. She was happy to see me, but still hadn’t pooped. I walked all around the open field they have out front and still no production. All that effort and expense and I still don’t even get the smallest of turds. We loaded her in the truck and went home where I walked her around some more to no avail. Called PJ and filled her in on our busy day. Joe had baked a batch of his renowned biscuits to go along with the leftover chicken soup from last night. Both Lisa and I agreed that it was even better the second time around. Good conversation, good healthy dining and Cali nosing the trash can or staring into space the whole of the meal. After dinner, the three of us relaxed in the living room watching an episode of Deadwood before I said good nights and went out to freeze myself silly walking Cali around and around in circles hoping for a miracle. About 30 icy minutes later, I threw in the towel and we went into the RV to call it a night. Cali ate two of the small sample cans of the special kidney formula food, so that was a good omen. I prepped for bed and wrote this blog into the night. Thanks a million Joe for being so kind to Cali and going through all the effort to get her taken care of. Southern hospitality at its finest from both Joe and Lisa. 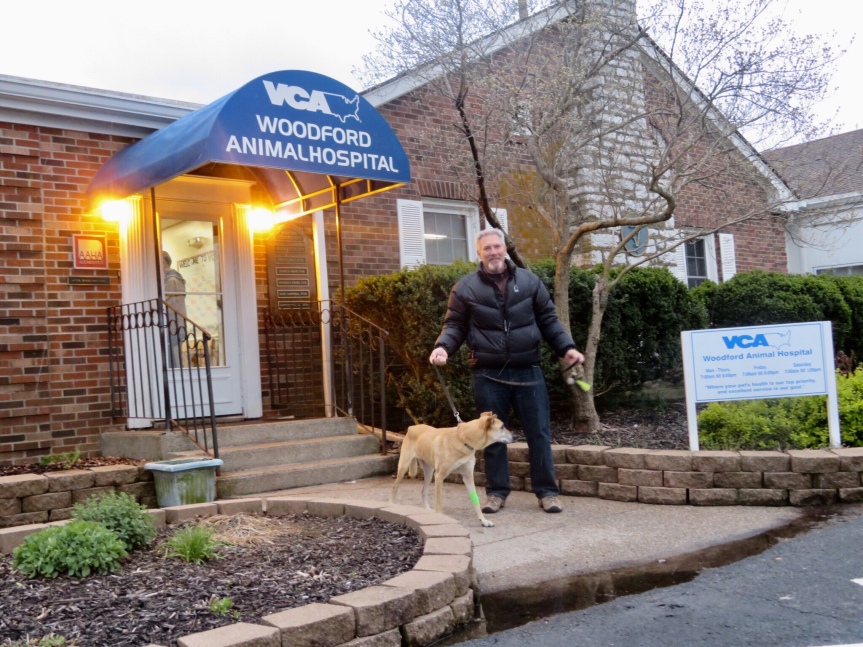 2 thoughts on “Loitering around Lexington”