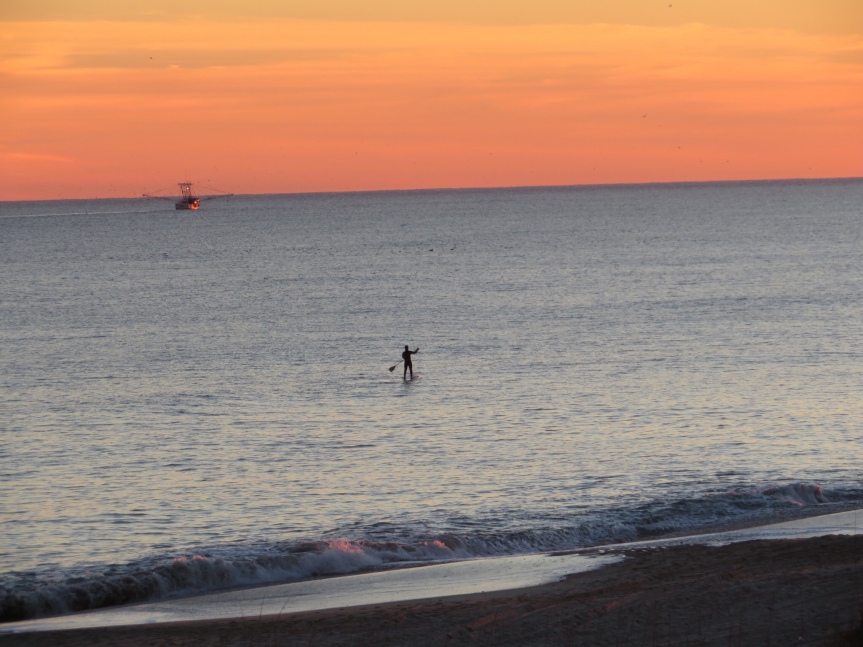 After our morning rituals we headed off to Morehead City to attend the local AA meeting. We drove down Atlantic Ave. passing through several quaint little seaside villages until we reached the Atlantic Causeway where we crossed the bridge to the mainland and into Morehead City. The meeting was at the city library in an upstairs study room. There was about ten people present and the folks were outgoing and the fellowship was awesome. 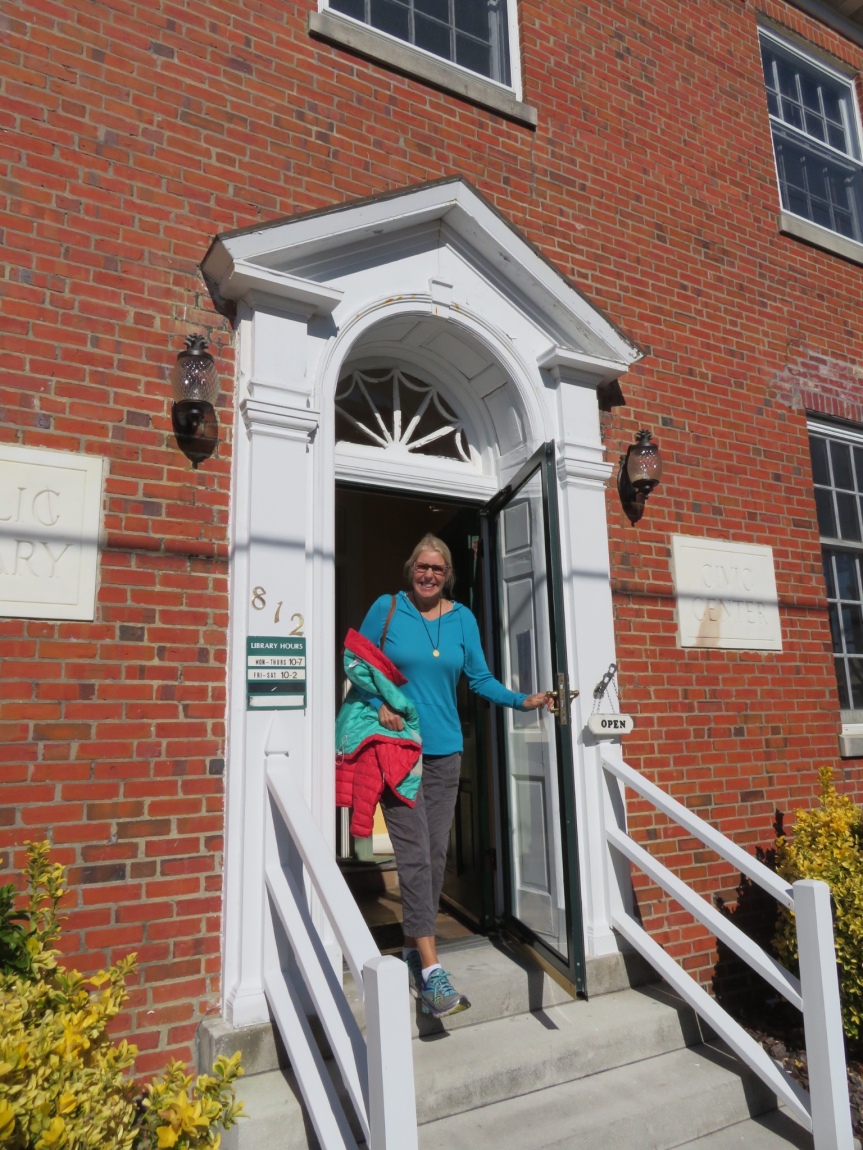 When we were done, we walked back down the block to a funky antique store that PJ had spotted on the way in. A hodgepodge of old junk was haphazardly strewn throughout the musty smelling storefront. PJ found a few little items that caught her fancy and contributed to the local economy with a small purchase. 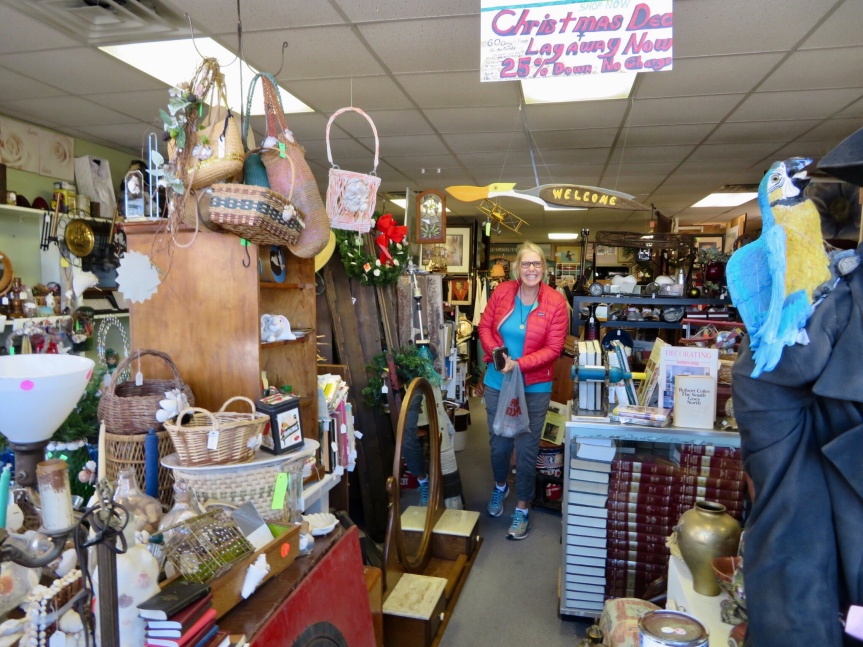 I was starting to get hungry and we all know how ugly that can be if left unattended so we drove over yet another bridge and into the artsy little beach town of Beaufort. We strolled along the dock checking out the local eateries. We decided on a little pub like establishment and were told to sit anywhere we liked. There was an oceanfront table so we sat although the table hadn’t been cleaned. We looked around and people were sitting with menus but most hadn’t been served. The one waitress on duty was chatting up some guys at the bar. After a few minutes we looked at each other and gave the nod and slid out the door then into the crafty pizza parlor next door. And we were so glad we did. Black Sheep baked us up an artisan pie in their unique looking ceramic oven. The crust was one the best yet and the roasted vegetables and marinated mushrooms rounded out an awesome pizza. The harbor view added to the experience and we emerged ready to explore the village. 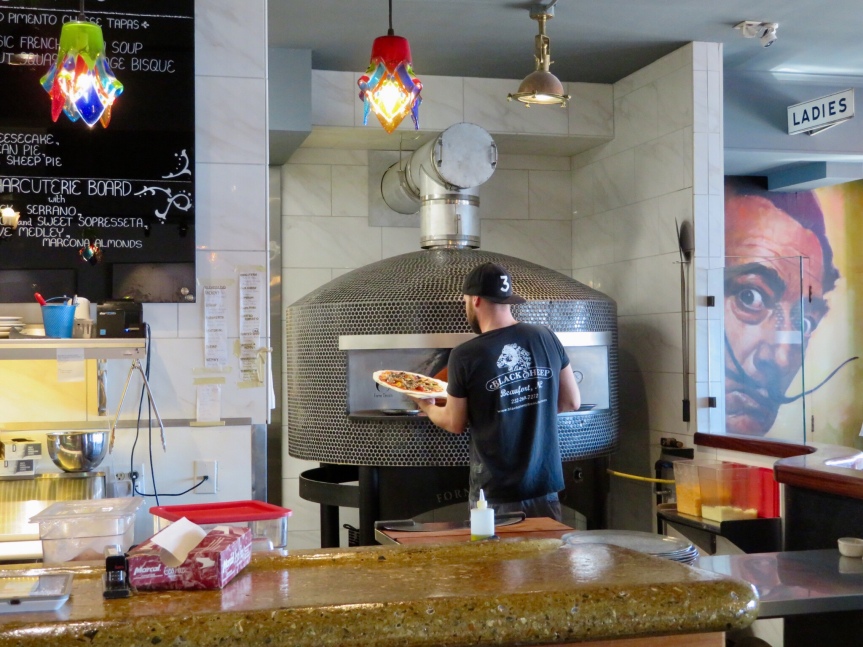 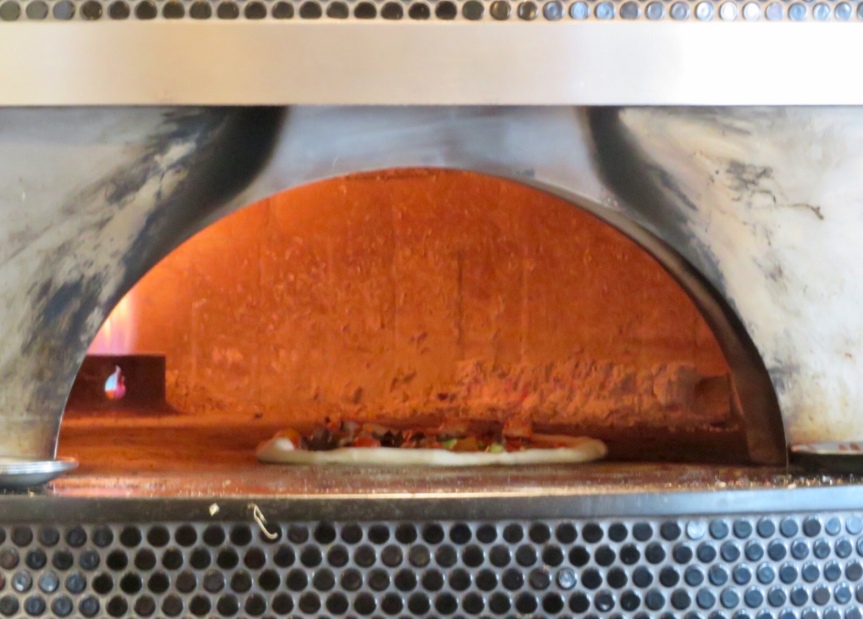 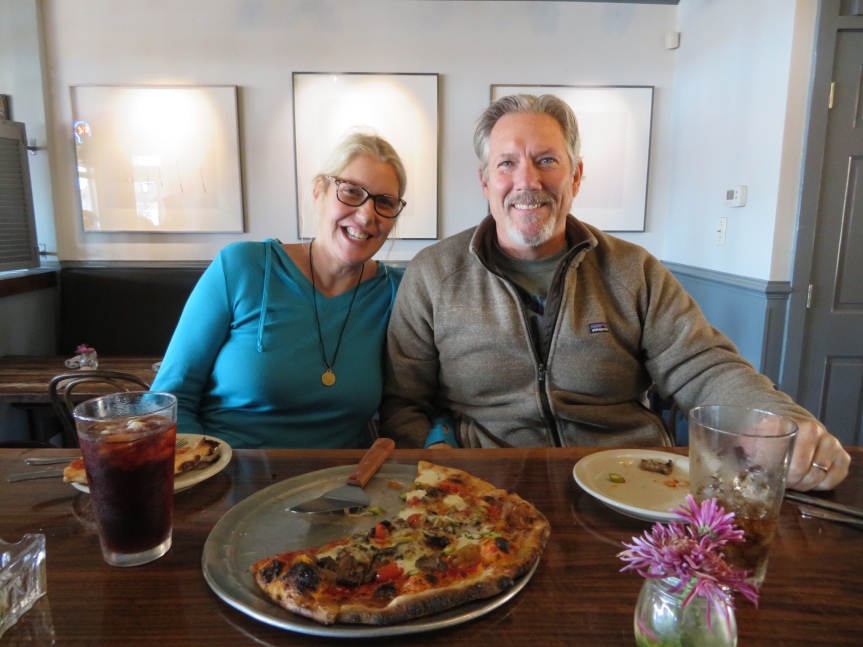 A few steps down the boardwalk brought us to the ferry and tour boat dock. The harbor tour was only a few bucks more than the ferry across so we opted to take a little cruise and see if we could spot a few of the wild horses they are known for. Being the off season, we were the only takers for Peggy’s guided estuary tour so we had the boat to ourselves. First we headed across to the Rachel Carson preserve and at first saw mostly birds. Then off in the distance, I mean way in the distance, we finally saw a few ponies in the marsh on the far side of the island. Not that we are great horse people, but this makes four states so far where we have seen herds of wild horses. New Mexico, Maryland, Virginia and now North Carolina. 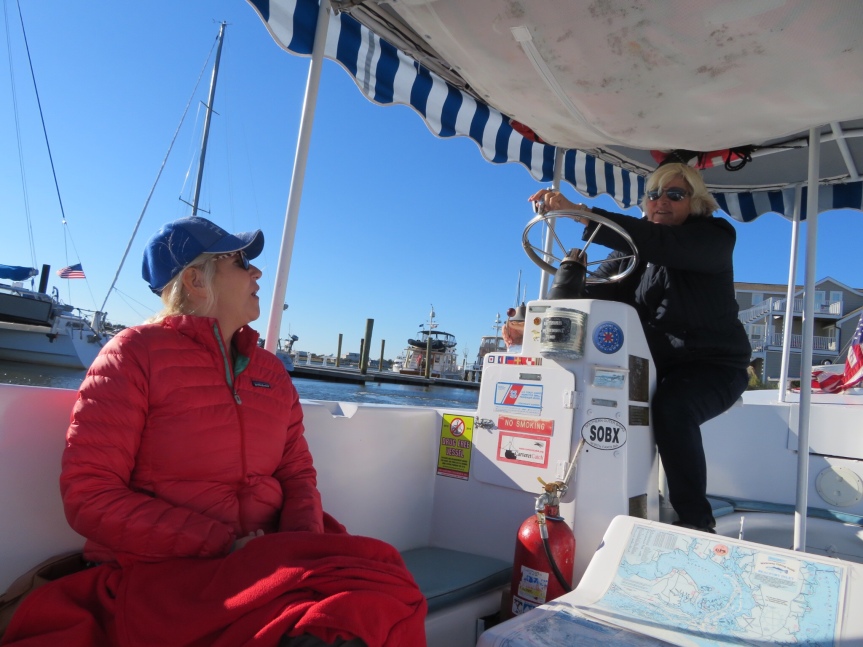 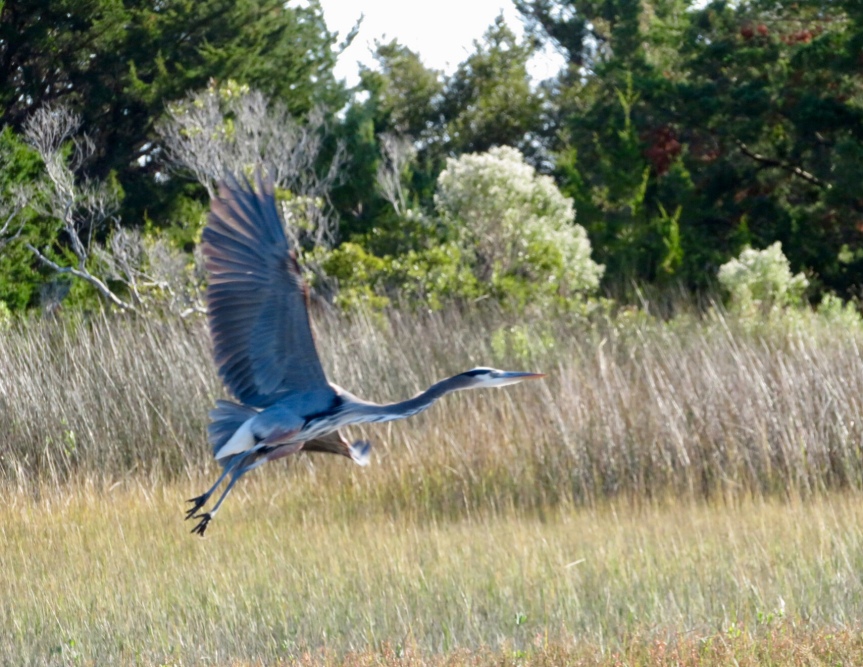 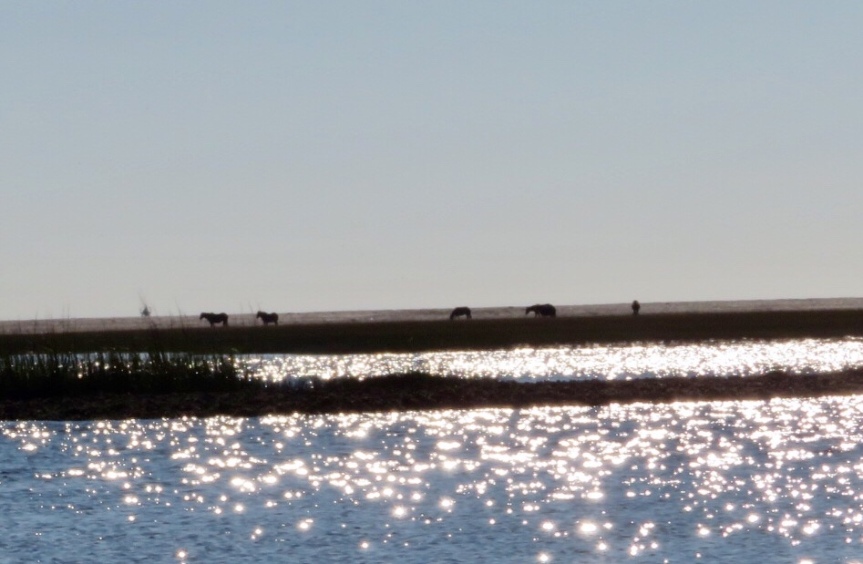 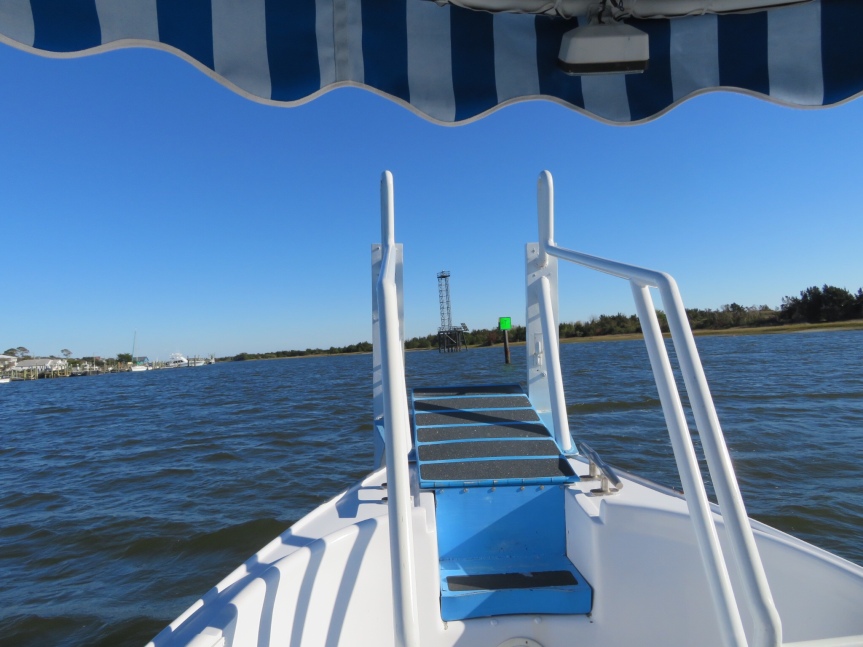 We headed back through the harbor getting some history of the city and checking out some historical houses and landmarks. A trio of sailboats with Canadian colors were moving out into the intracoastal waterway heading south to warmer areas. It was a lovely sunny afternoon and people were out on the calm waters making the best of the crisp fall day. Some dolphins broke the surface sending sprays of water out of their blowholes while a crabbing boat loaded with traps floated by in the background. Peggy was a great resource and filled us with facts and history on this area of North Carolina. 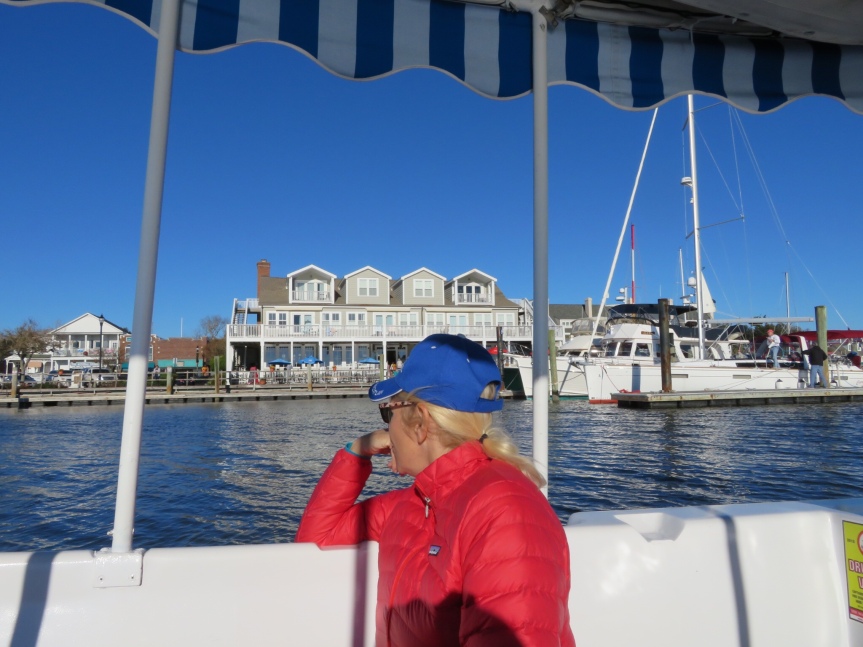 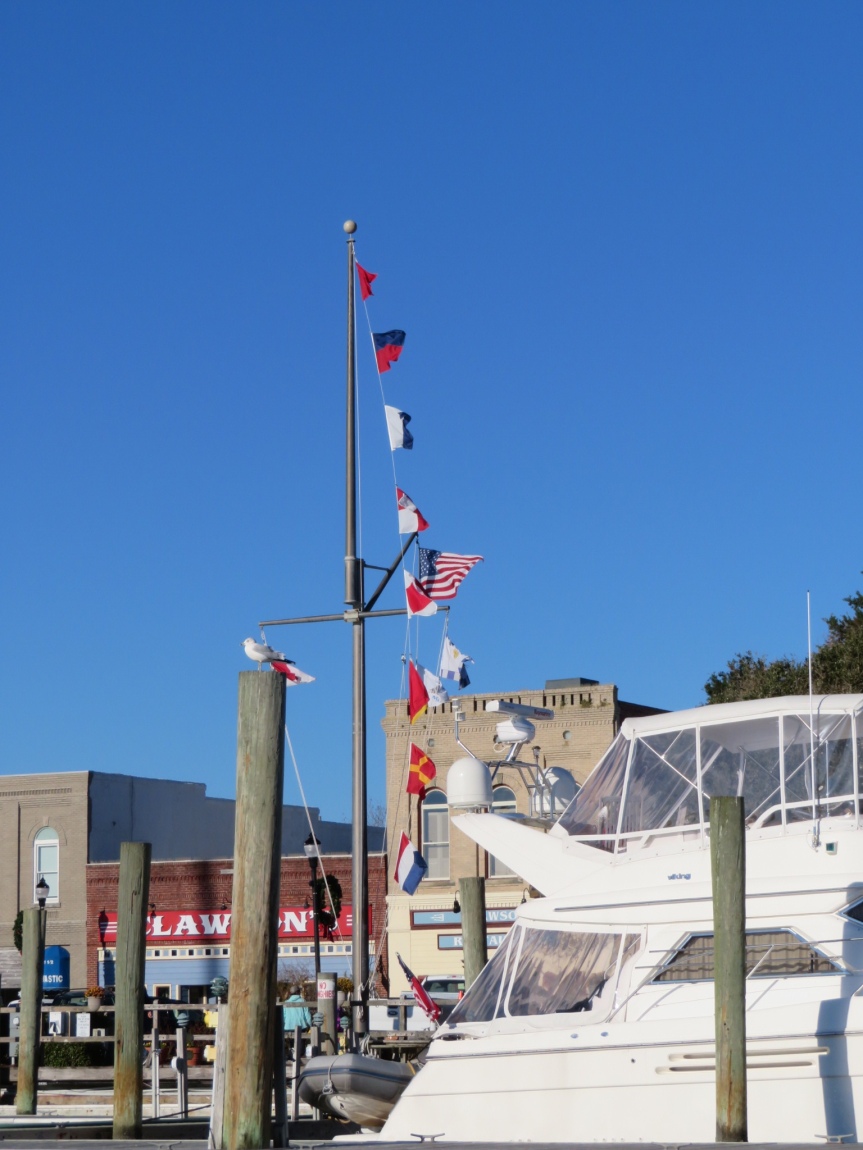 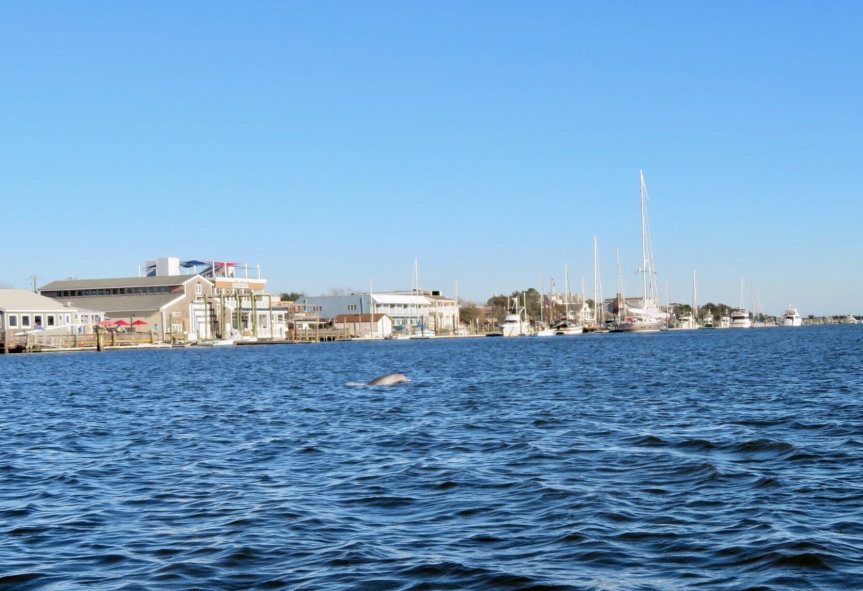 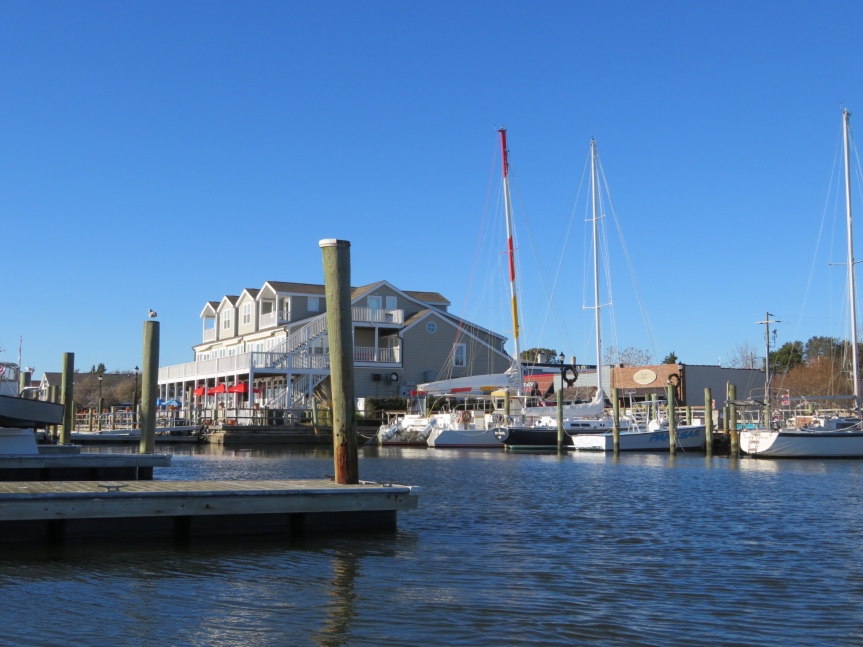 Our mini voyage lasted about an hour. We disembarked next to the public park and continued our exploration on foot. We poked our heads in a few shops and stopped to check out the Christmas decorations that were going up around the main downtown area. The waterfront isn’t all that big and soon it was time to head back to Emerald Isle to check up on Cali. 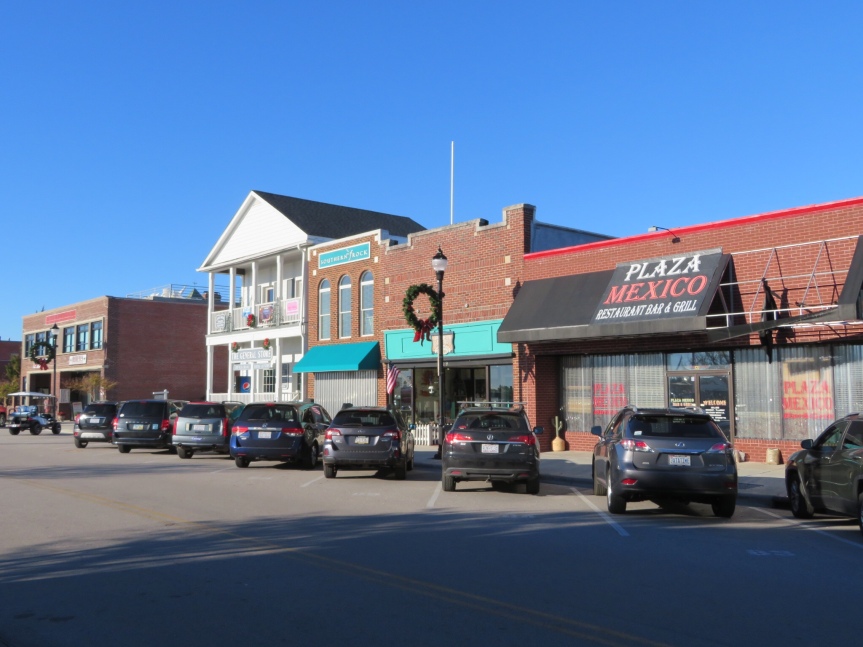 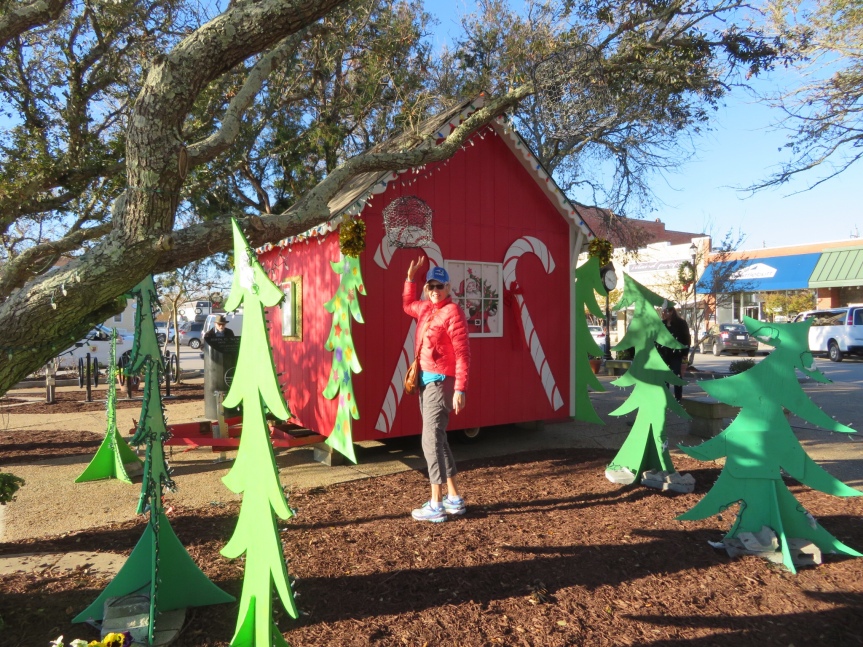 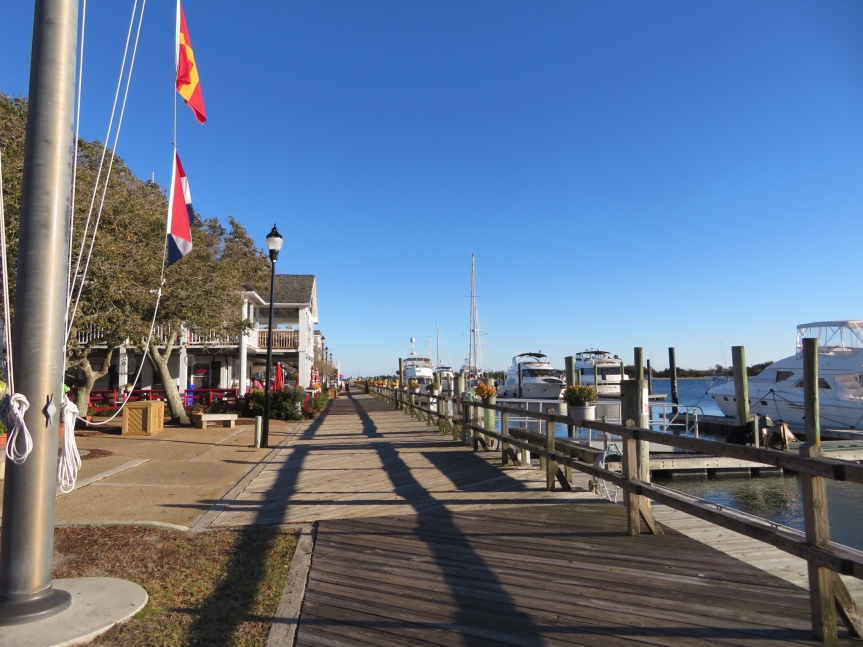 The campground had filled up quite a bit during the day especially in the lower area nearer the beach access. Luckily fewer people were setting up near us so we still have a buffer of three or four empty sites between us and the next guy. Lots of kids and it seems everybody has at least one dog along for the ride. The new family across the road has three large German Shepherds and two young boys all in a not so large trailer. Some deep throated barking every time Cali steps out for a walk. It was getting to be that time of day so we stepped on over to the wooden pavilion overlooking the beach for another magnificent sunset. Lots to be thankful for on this Thanksgiving Eve. 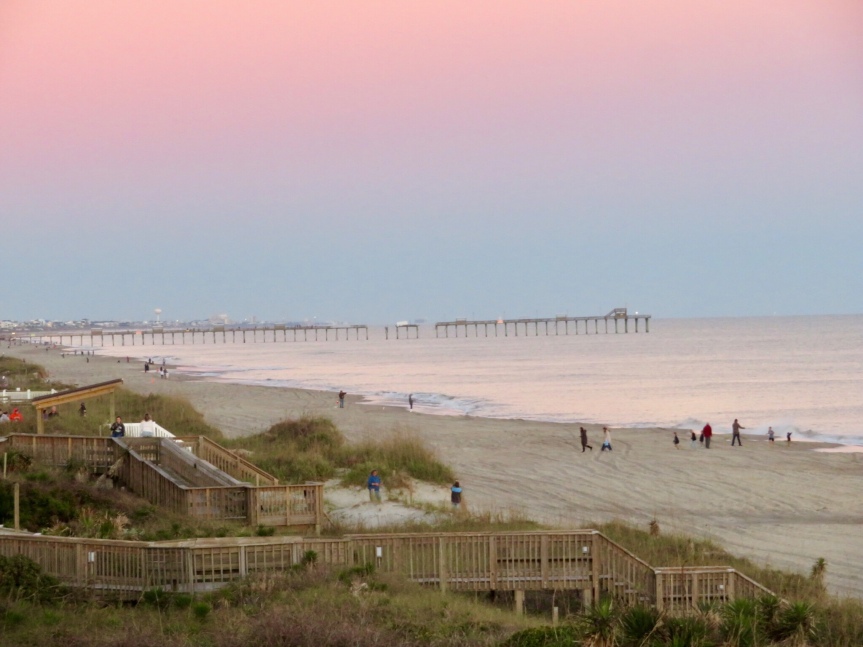 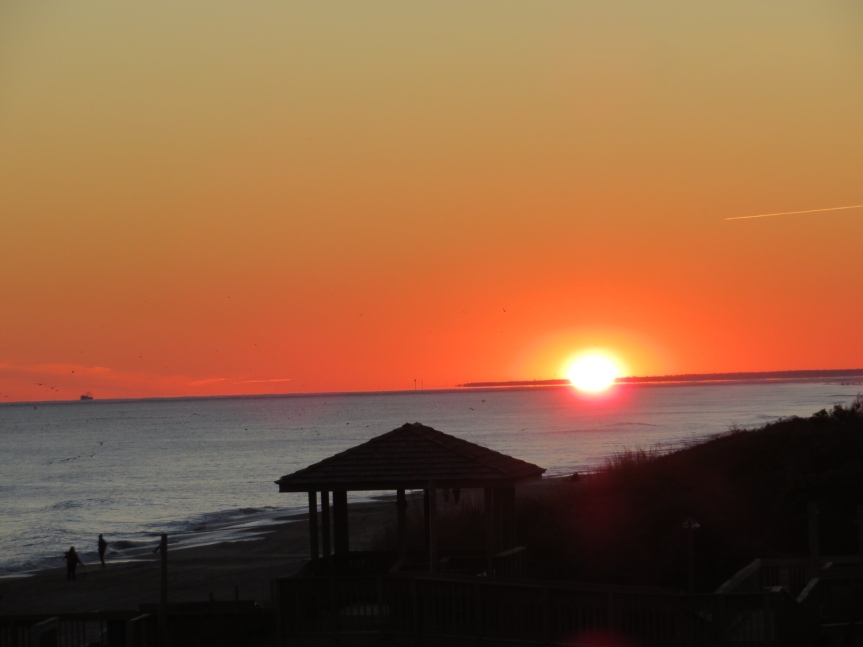 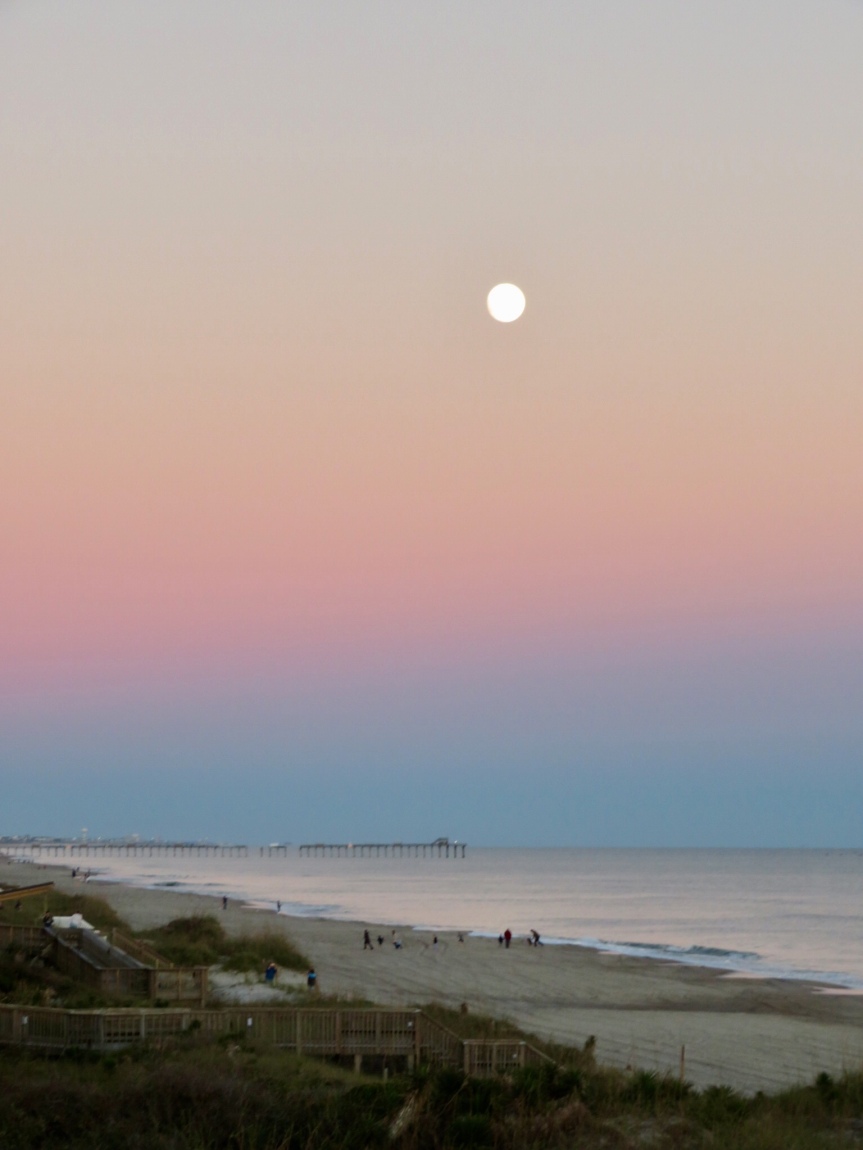