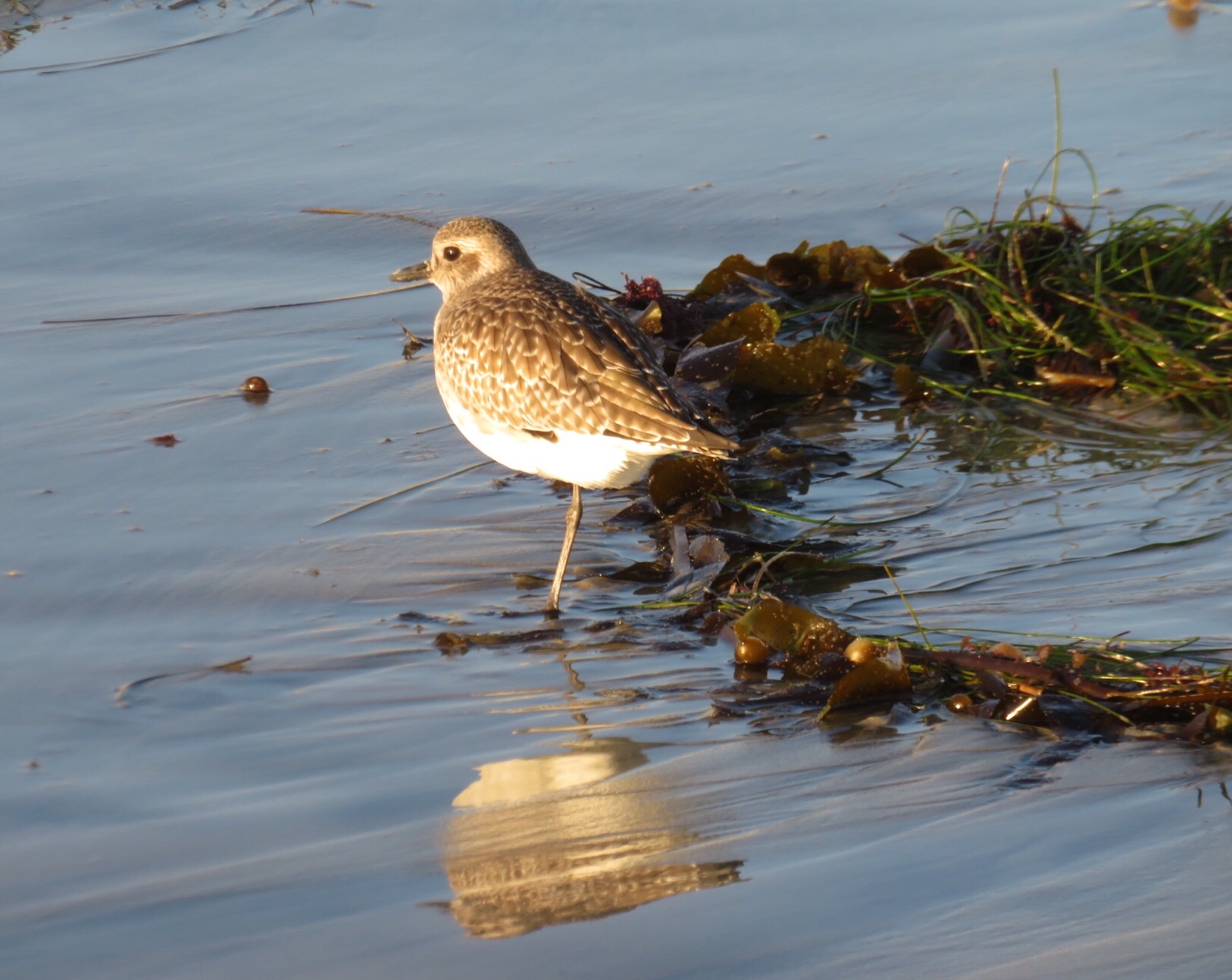 Today we had to move down a few spaces and check into site# 25, not nearly as nice as the campsite we have been at most of the week. We have a hedge along the fence at the bluff that blocks our view of the ocean unless we go stand at the chain link barrier to look over the top. Besides that, we are a few spots down and across from the trash and restrooms. Still not a bad place to be hanging out. Being Friday, tons of people are pouring in and every space is getting filled in. So much for the peaceful days of ~ 35% occupancy. 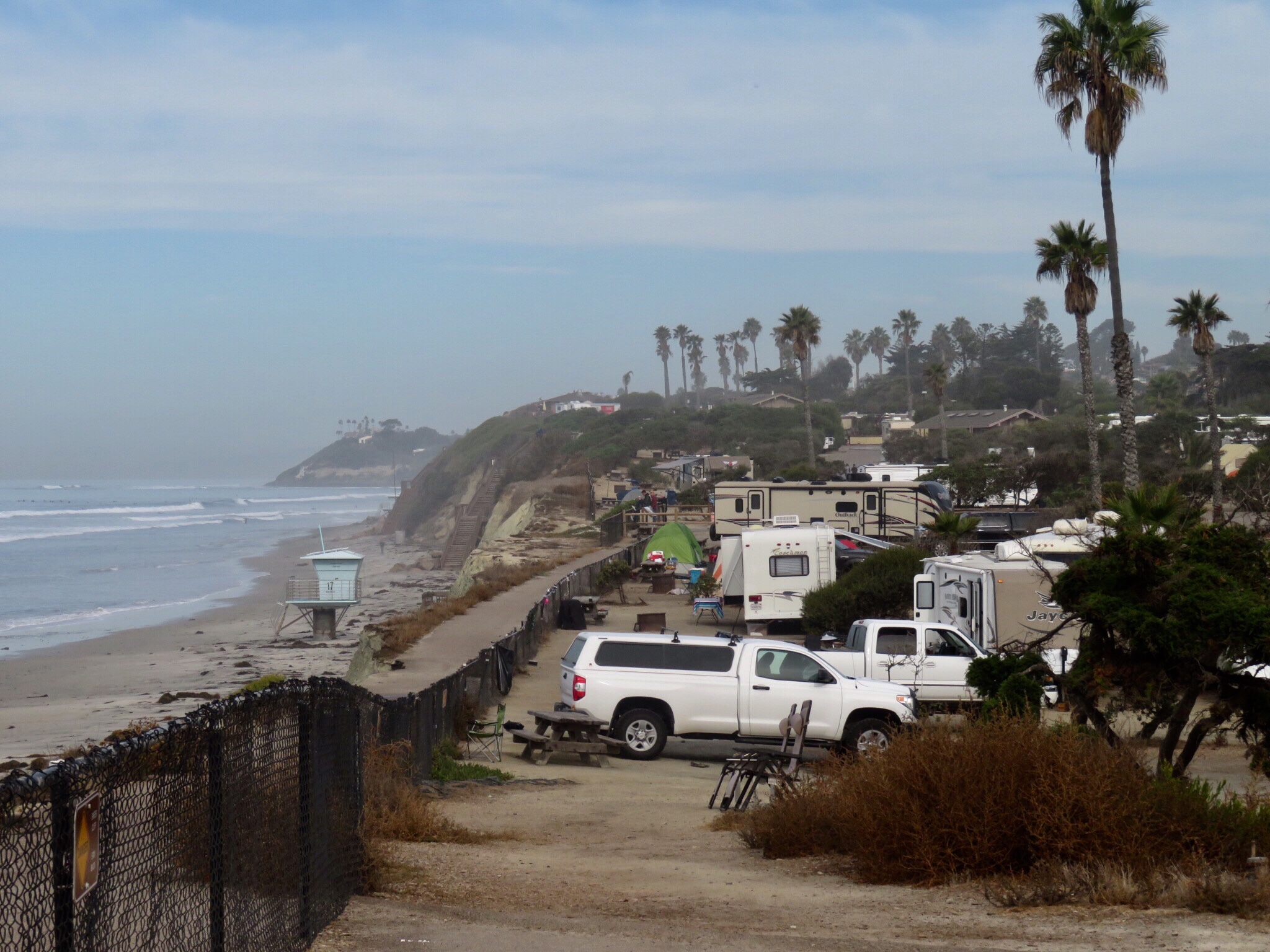 We broke down camp and PJ carried the mats down while I went to the dump station to freshen up the facilities. We got resettled then Pamela had to head over for a dermatology appointment in Carlsbad. I hung around with the dogs a bit then at around noon I paddled out for a crappy session in the blown out waves. Glad there was no one around to see me. 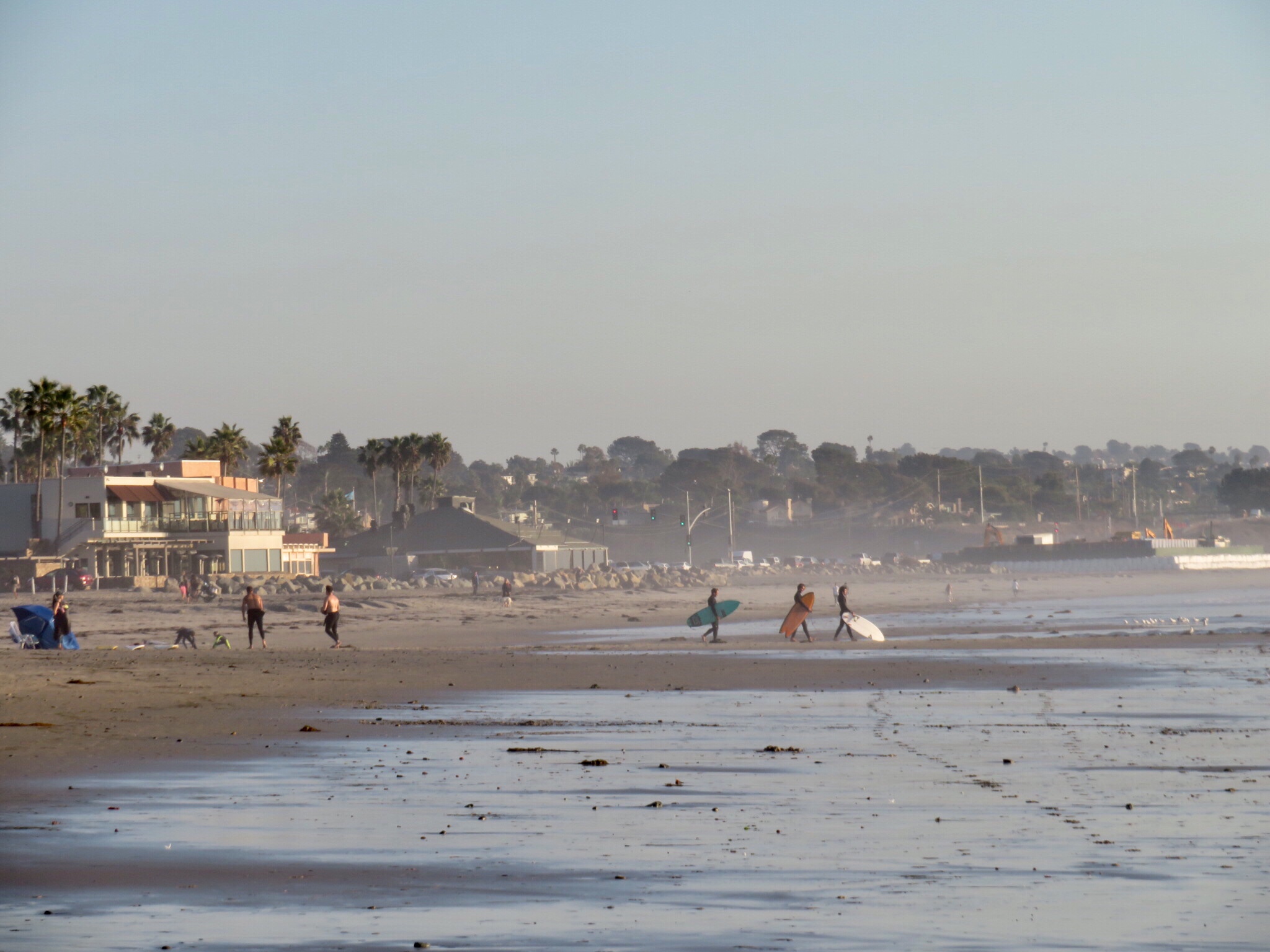 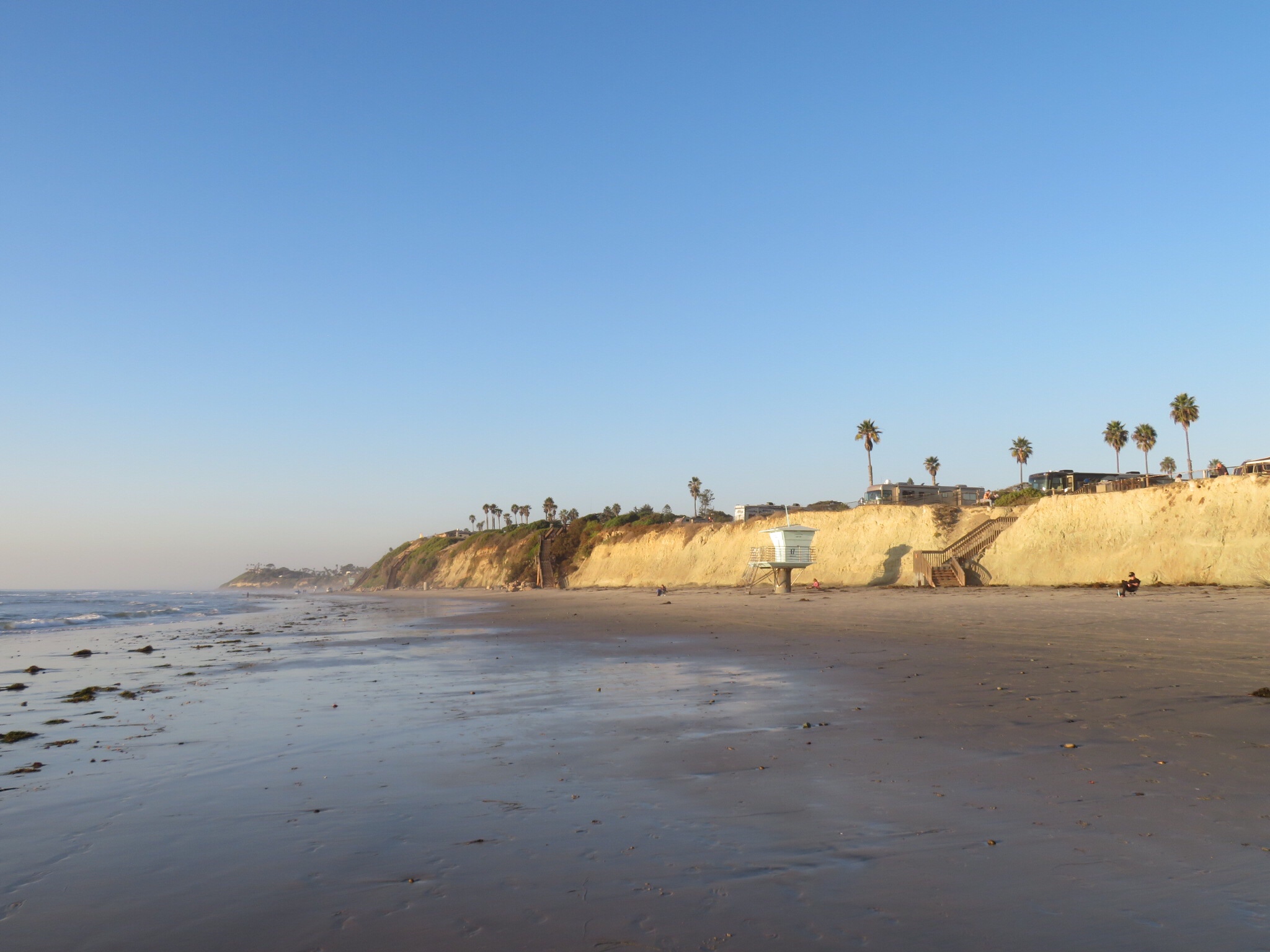 After drying off and taking the dogs for a foray, I walked over to Bultaco and got a pair of fish tacos. I took them back to camp and munched them in the shade of the awning while waiting for PJ to get back from running errands. Pretty soon she pulled up with a load of groceries and some little rosemary bush Christmas trees. We were unloading when we heard a call saying “I know those two.” It was Keith and Jeanette, friends from my days working at MiraCosta. They were taking their dachshund Andy for a stroll through the park. We talked for a while and caught up on the latest news. He retired last year right after I did and they have been doing quite a bit of traveling themselves. They took their leave then PJ suited up and ran down to the sand to get in a boogie boarding session before the sun disappeared for the day.

We went down in front of the kook where there is a little bit of sand on the reef. I wandered along the shore taking pictures while PJ caught a bunch of little crumblers on the inside section. It was another beautiful evening with lots of people taking advantage of it. 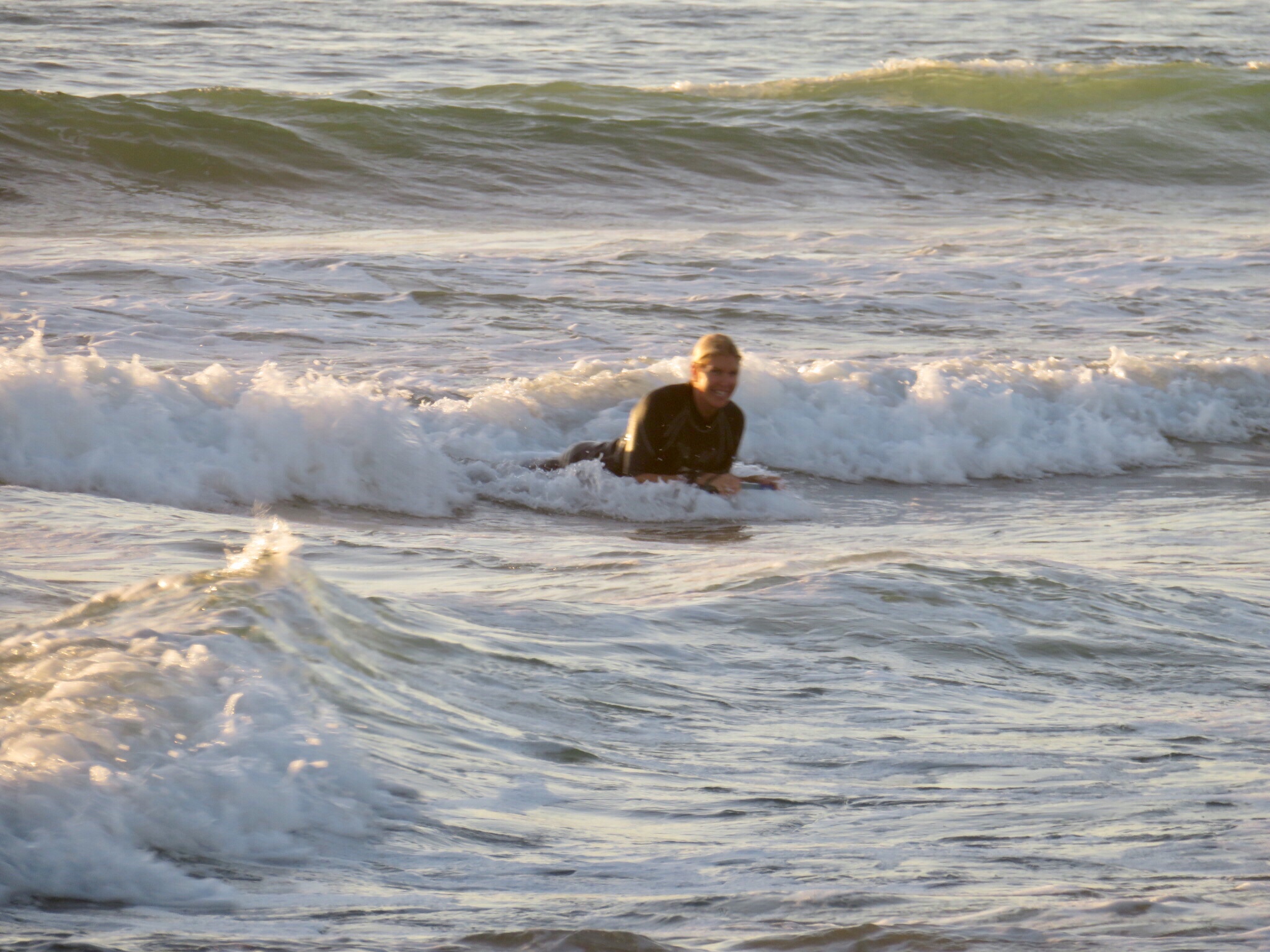 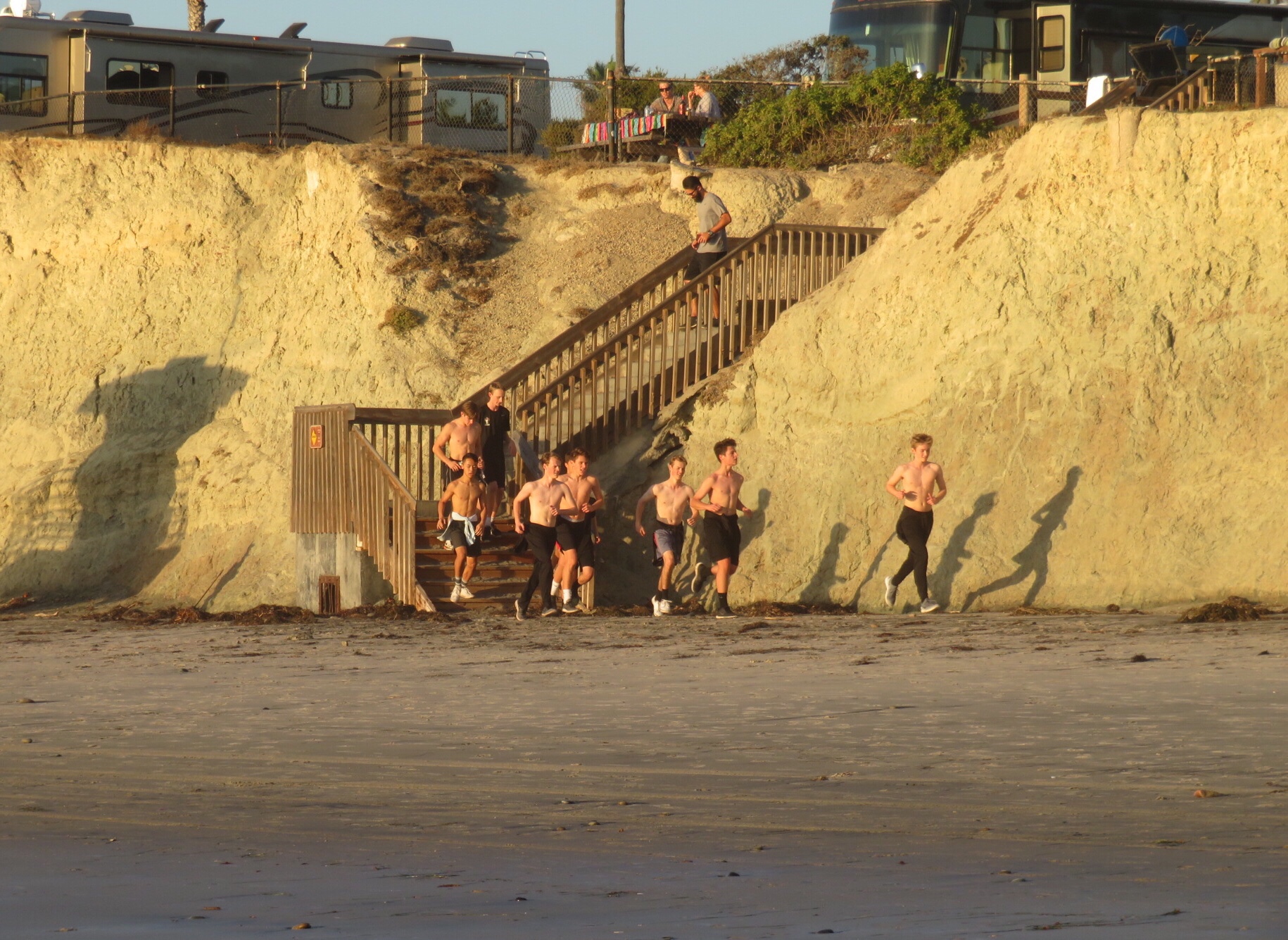 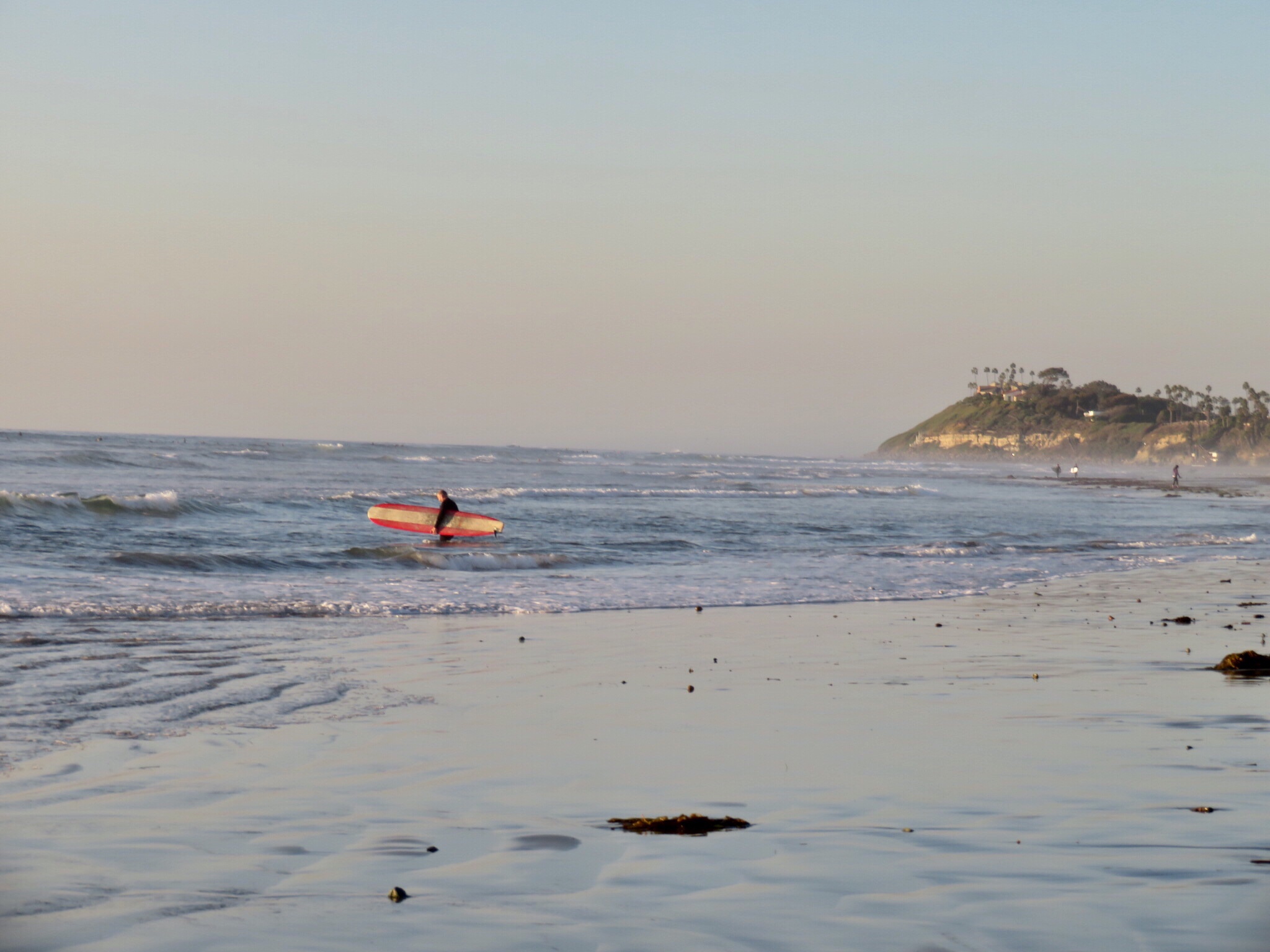 After rinsing off, we got a fire burning in the pit and I prepared a salmon filet on a hickory plank that we grilled on the open fire. New arrivals pulled in on our left and right. Young men in tents here for some serious surf. Hope it doesn’t get too loud. The salmon came out awesome, hickory flavored with a light sprinkle of Indian spices. Served it up with rice vermicelli and a spinach salad. We sat outside for quite a while burning wood and watching more tourists piling into the campground. 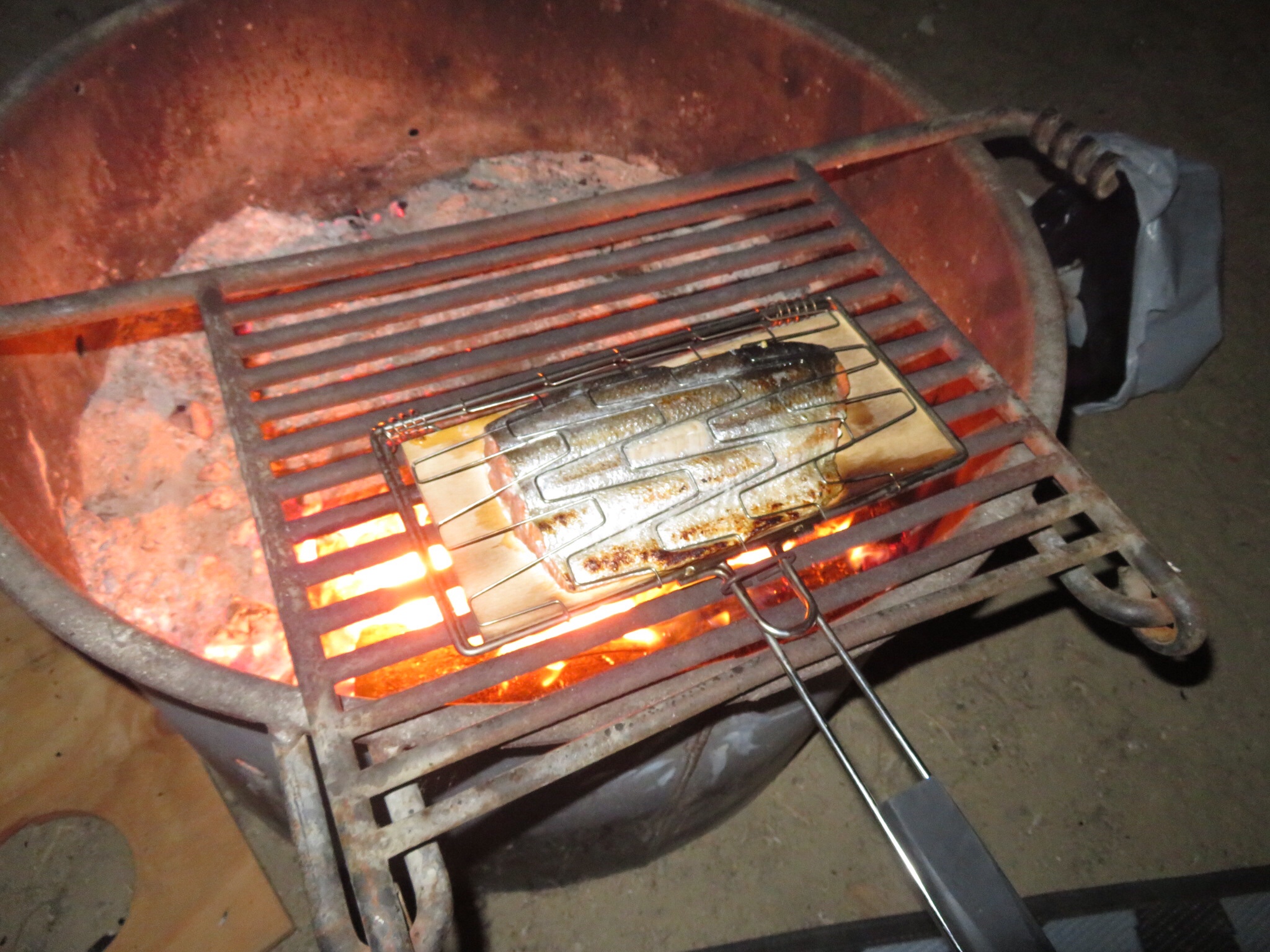 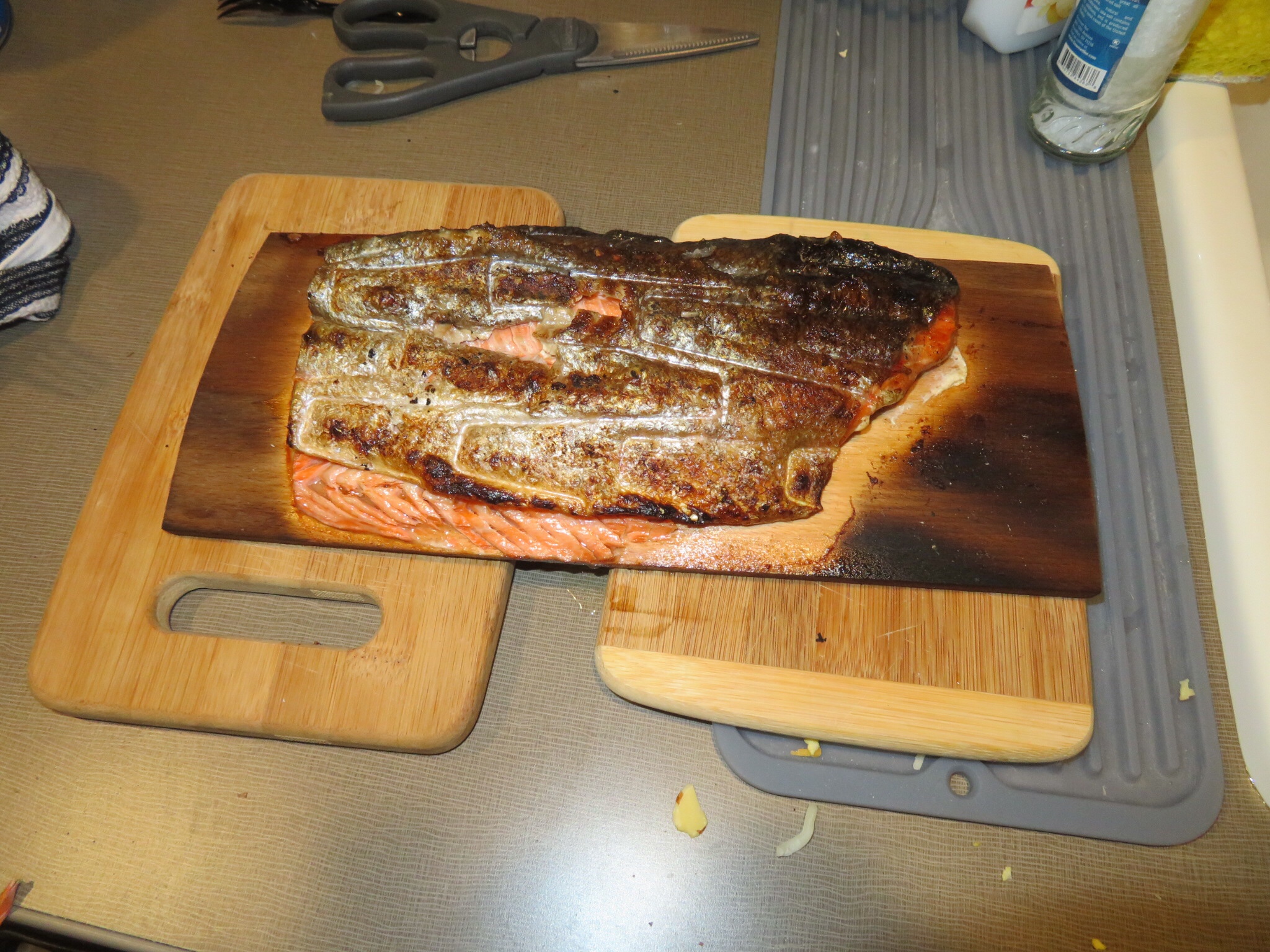 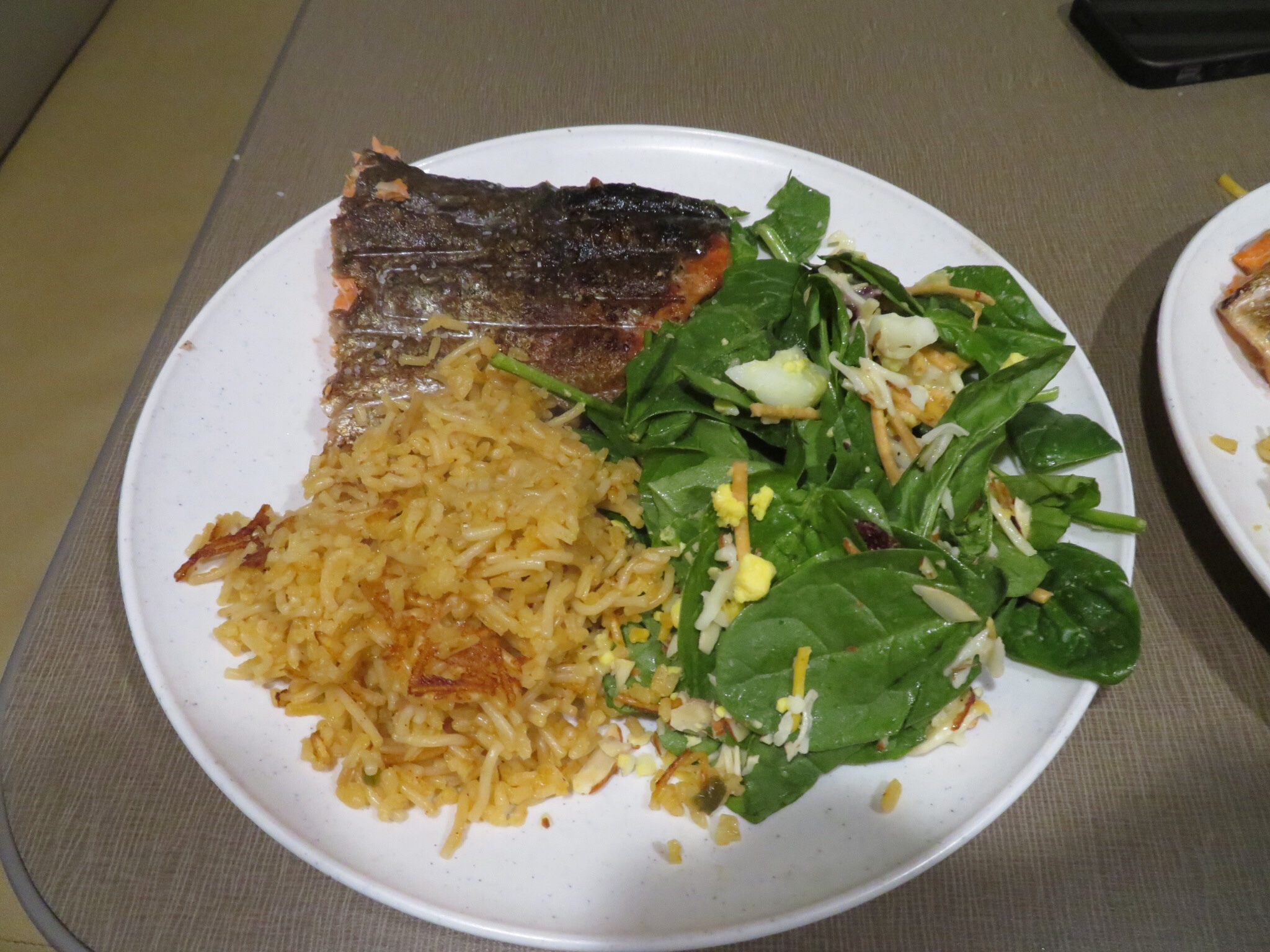 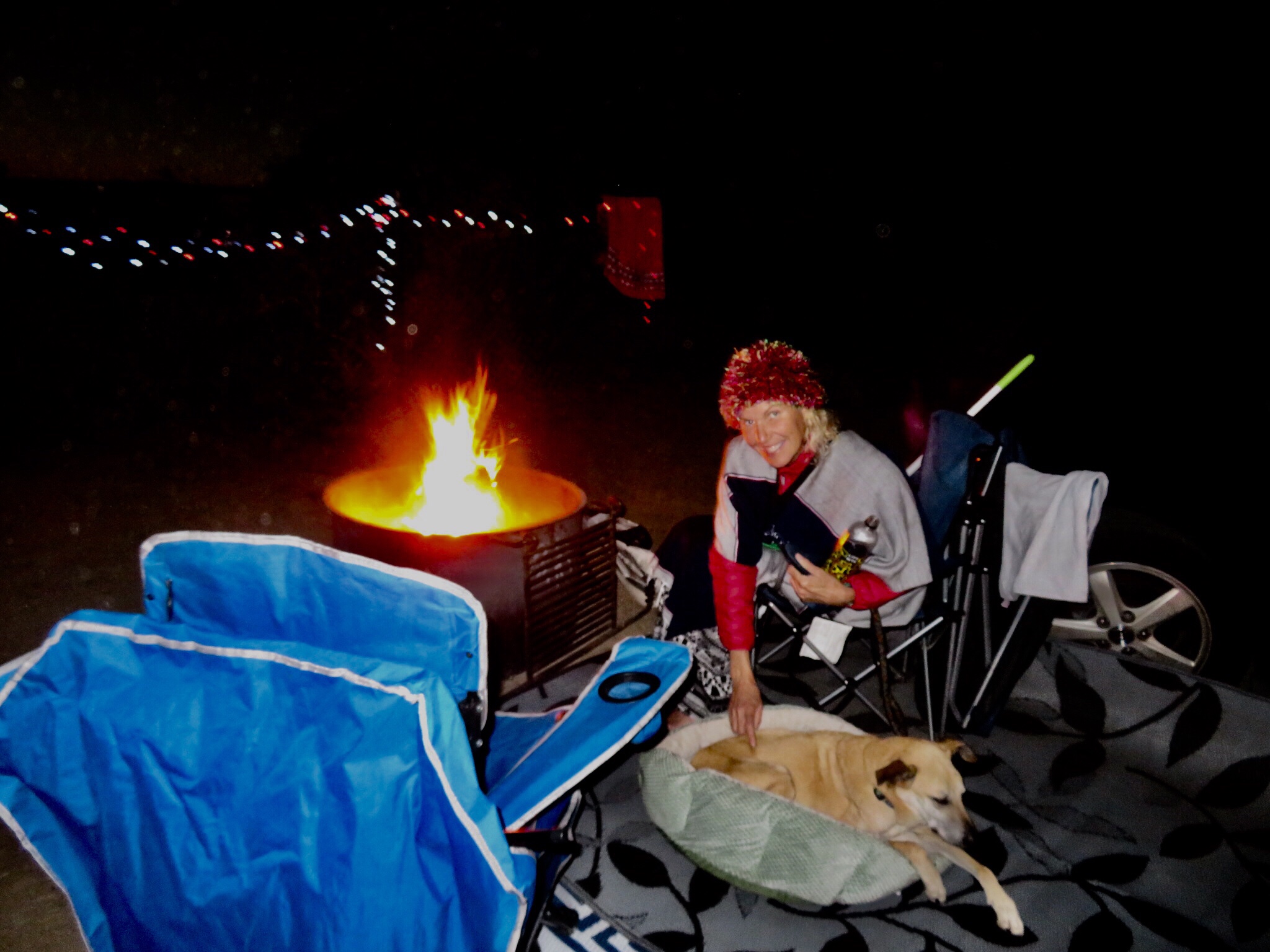