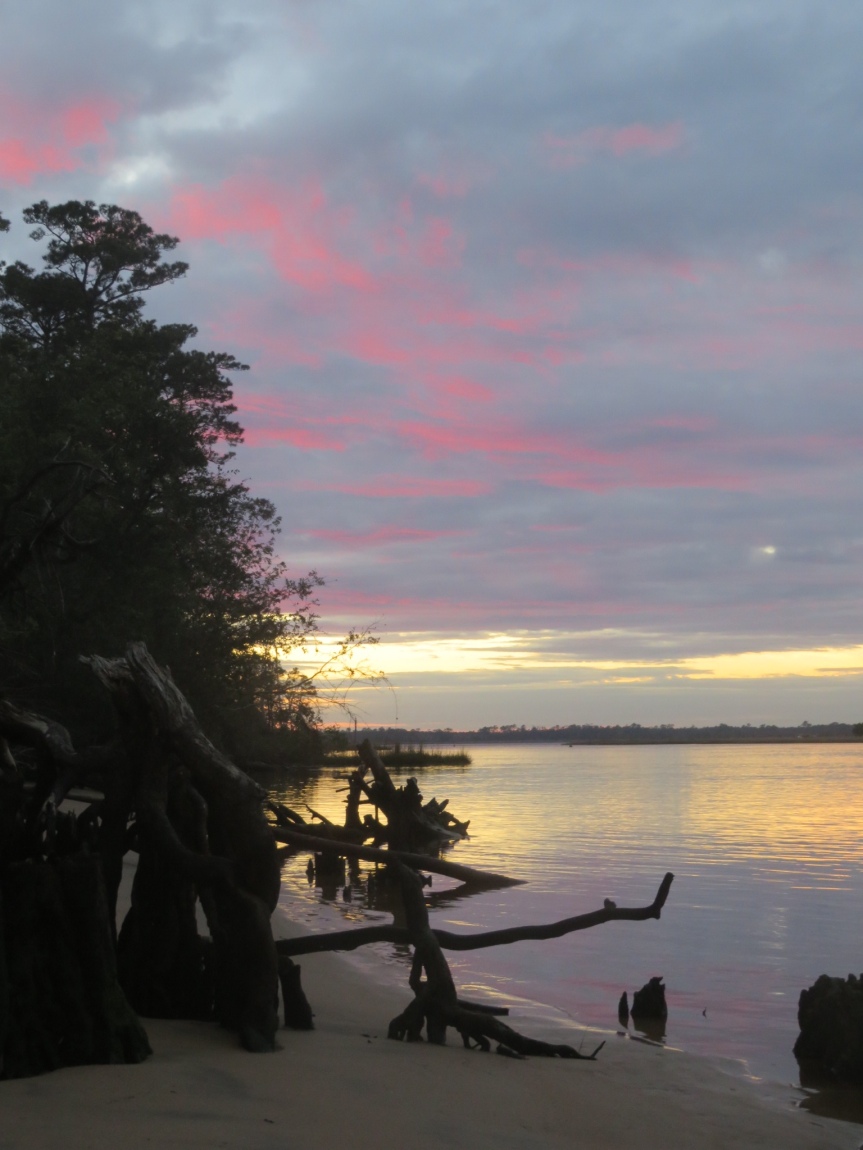 We started off the morning with a hike. Both of us were a little off kilter and the communication wasn’t the greatest. After a minor disagreement, we decided to set the day on restart and give it a new beginning. Things mellowed out as we hit the trailhead and we had a cool little trek on a short trail that came out near the back of the Post Office. When we’d arrive at a Y in the road, we would let Cali decide which fork to follow. Fresh air and exercise, best start to the day. We ate breakfast outside enjoying the warmer temperatures. Today reached mid-sixties. 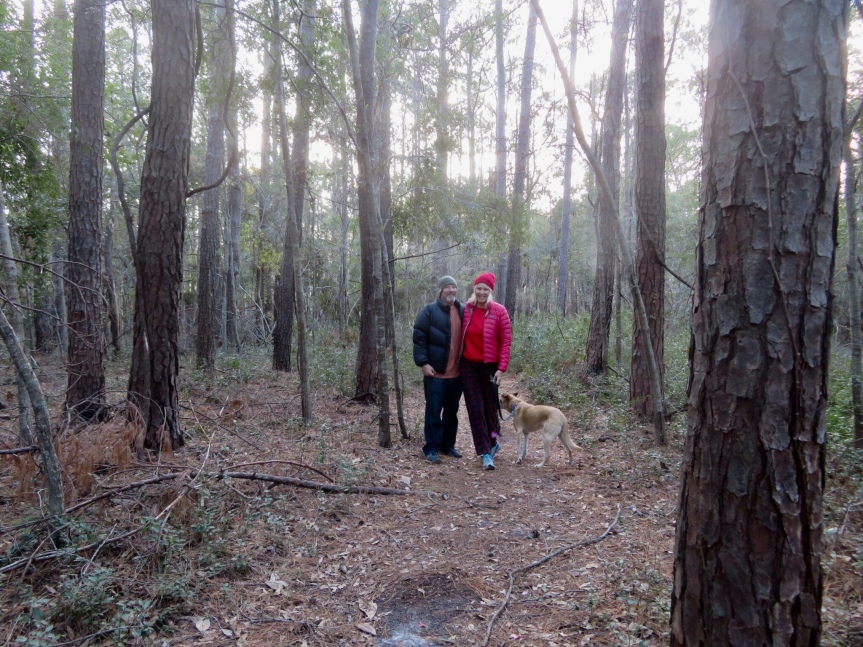 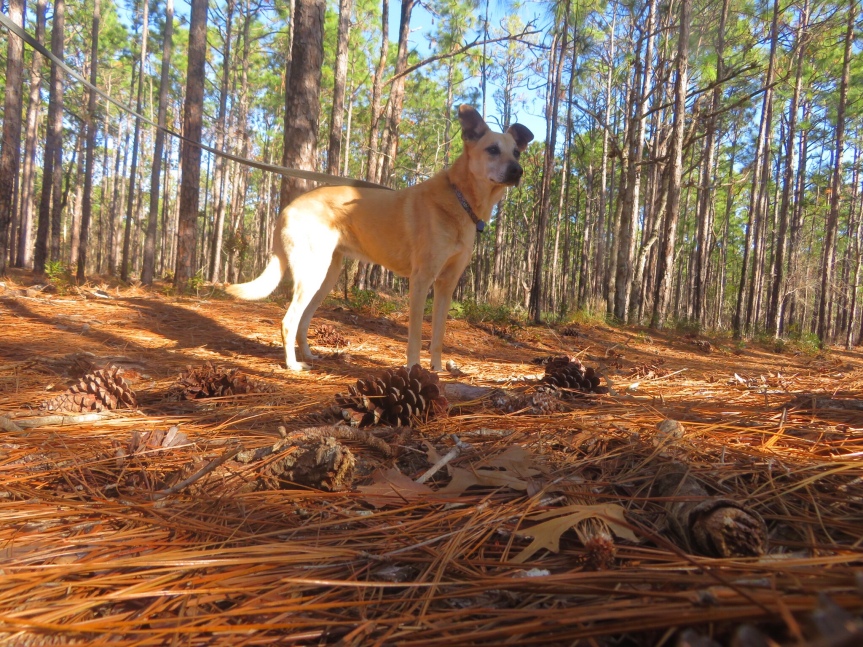 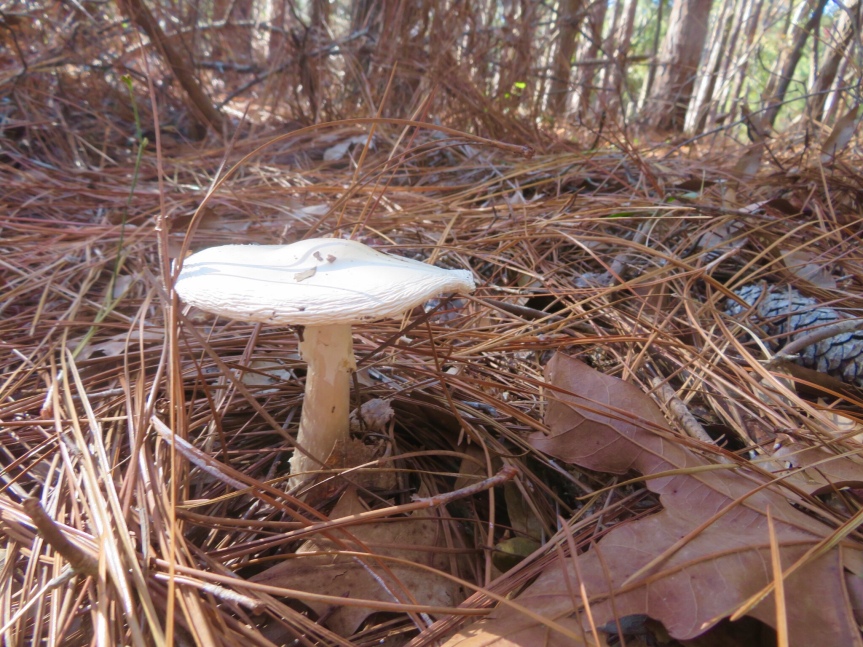 At noon, we attended the ‘Serenity by the Sea’ meeting in Carolina Beach. A cool little group in an old building near the beach. A good way to get centered before heading over to Planet Fitness for a workout. The gym was small but not too crowded. We got in a good workout and a hot shower then stepped next door to Jersey Mike’s for sandwiches to go. Still a lot of damage being repaired after Hurricane Florence. Piles of ruined household belongings lined the road where the houses were at lower elevations. 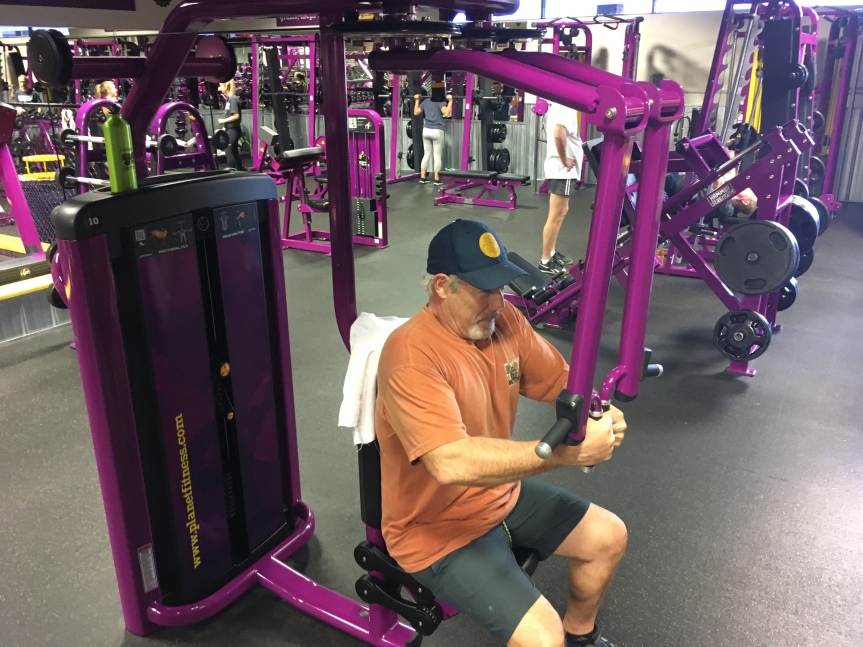 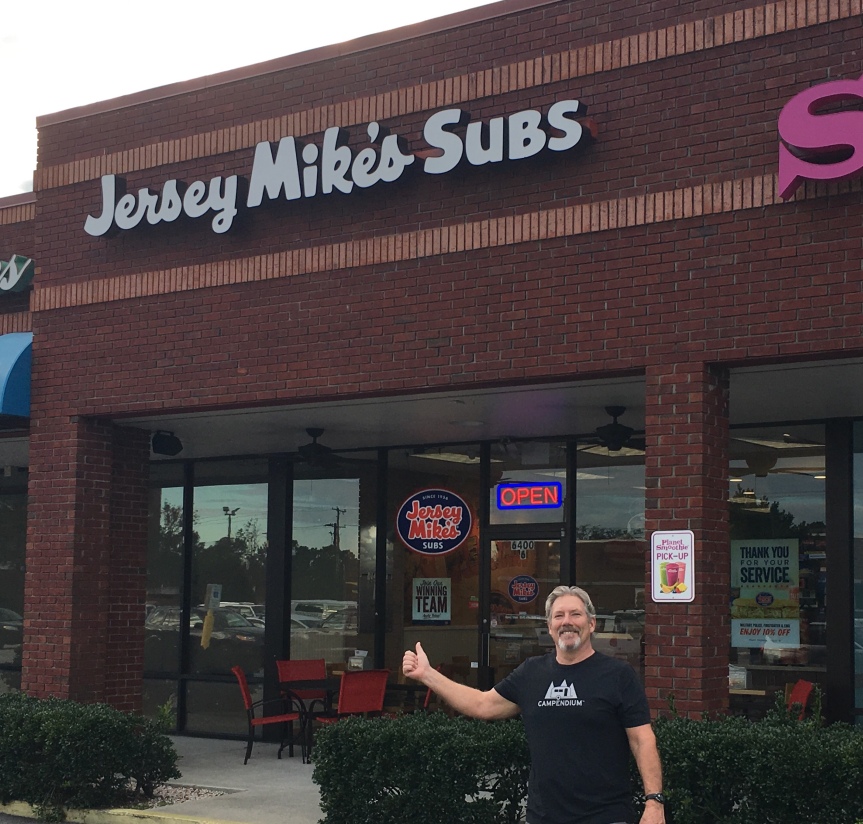 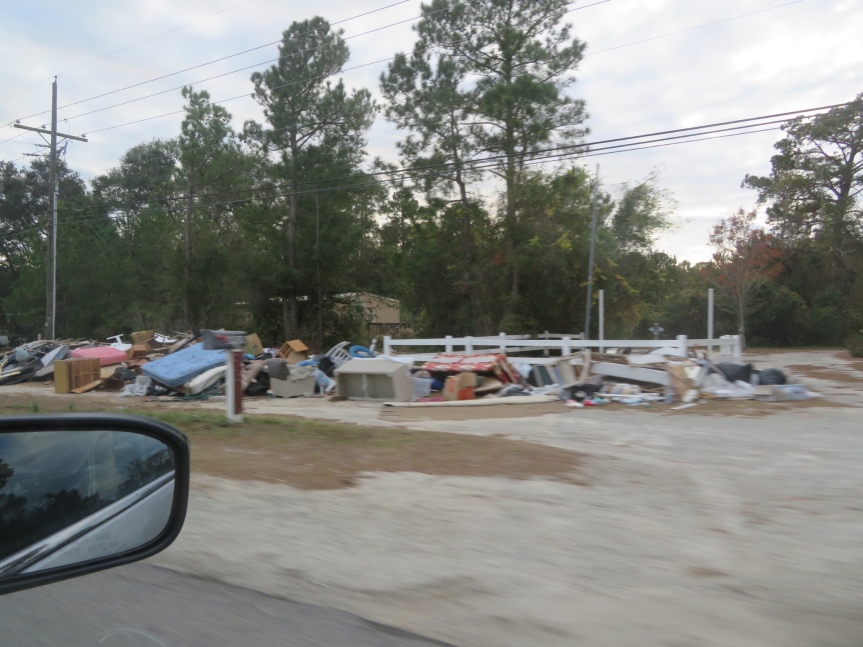 We returned to camp and freed the hound and ate our subs. A balmy day after all of the chilly temperatures we’ve been having, shorts and t-shirt weather. After eating our late lunch / early dinner, we hiked down to Snow’s Cut and ended the day watching the sky turn to pinks and gold as the sun went down. Couldn’t quite see the sunset, but it was a beautiful, calm spot with the occasional boat passing through the channel as it enters the Cape Fear River. A couple of good ole boys startled us coming around the bend carrying thick tree limbs over their shoulders as they were heading back to camp to start a fire. Full Deliverance scene. 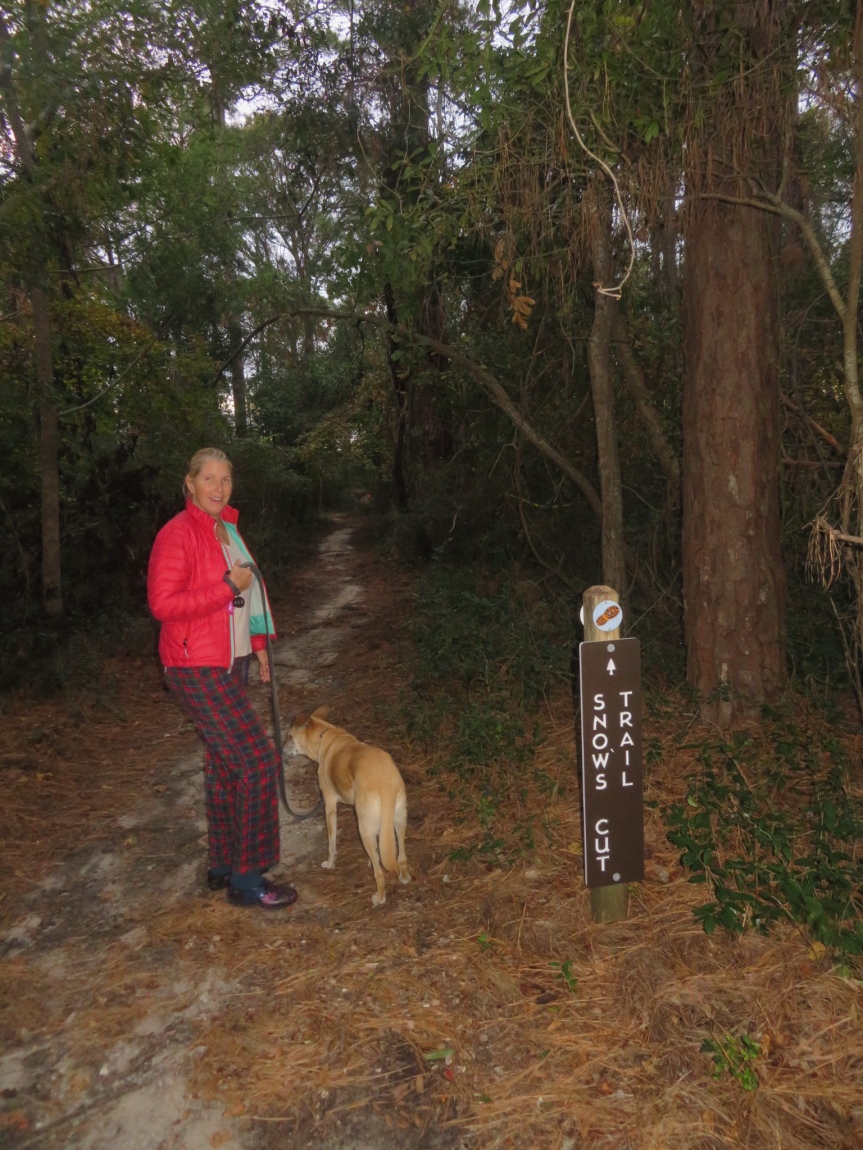 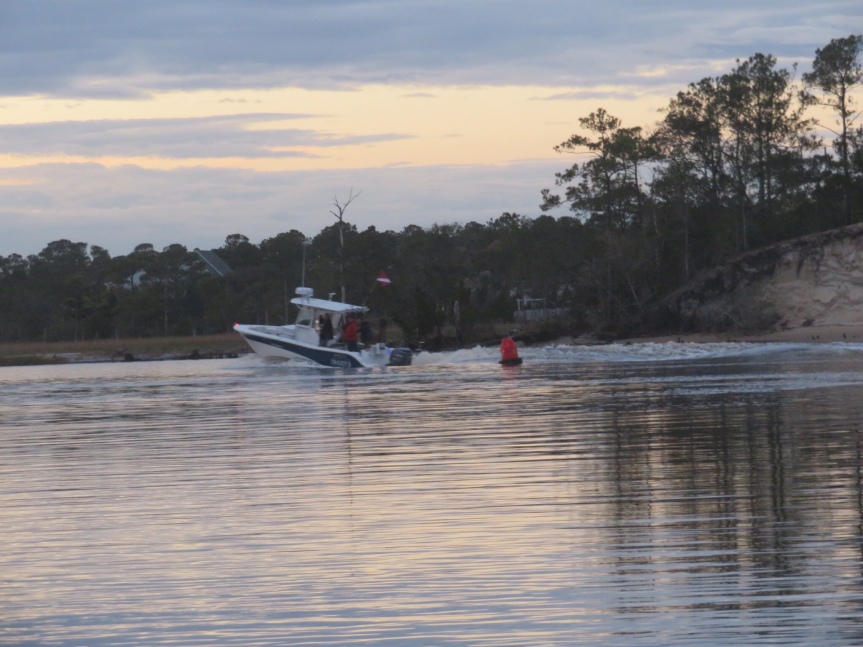 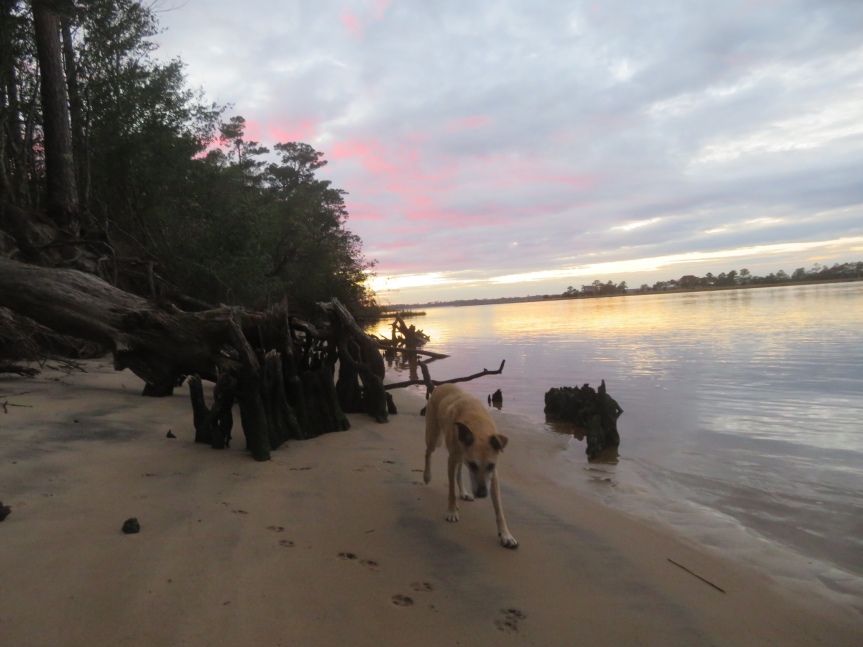 Back at camp, car after car kept piling up a couple of sites over from us. Kids were hooping and hollerin’. It turns out a church group is setting up camp for youngsters for the weekend. Lots of noise and lots of excitement. We walked by later and the kids all wanted to give Cali a pet. PJ lit us up a fire in the ring and we hung around in our shirt sleeves drinking tea, playing some music and eating a Little Debbies for dessert. The camp has filled up a bit for the weekend, but there are still lots of empty spots. One good thing about our site is that the one adjacent is closed off due to a fallen tree from the hurricane. 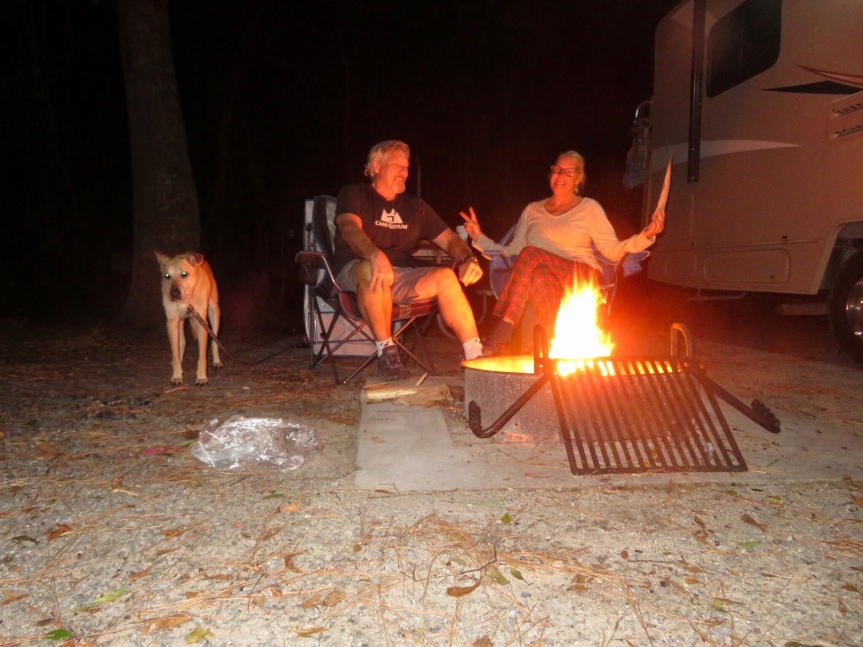