Thursday began with a bunch of phone calls tying up loose ends for the trip. Things like arranging for the removal of the refrigerator, pick up of hazardous waste and a number of other mundane but necessary actions. We continued organizing and getting the place in order for the painters coming in on Saturday. A little after noon, I got Lexi organized and drove up to Encinitas to get some smaller tire valves installed on the front tires. The ones on there currently are 4” brass valves that I’d had rotated to the front when I had new longer stems put on the rear wheels. 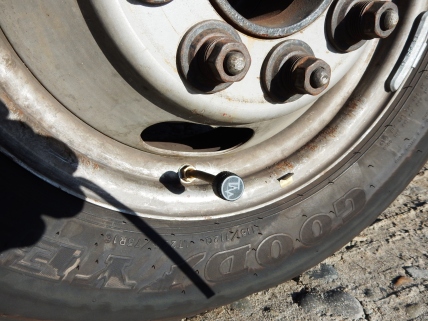 But they stick out a little too much and I wanted to get my little pressure monitors tucked in there a little more.. I pulled into Discount Tire and they signed on to do the work for $20 but I had to run across the street to O’Reilly’s and buy the parts. They had some 1 ½” nickel plated brass ones for a good price, so I grabbed them and dropped them with Andrew at the tire store.

I took my undersized bike and oversized bag full of avocados across the parking lot to El Camino Bike Shop. Will had ordered me a Trek DuoSport one size up from my current bike. We goofed around the shop for a while then I took Will out for lunch over to the Kebab place for a couple of donors – a kind of middle-eastern burrito. With a full stomach, I started in on building the new bike. Got it mostly together and Will helped me out changing the front fork with the shock for the rigid one I had on the other bike.

After the better part of the afternoon, I was shaking hands and saying farewell to the crew at the shop and loading the bright blue bike onto the front of the motorhome with its new tire valves. Thanks a million Will, for all the help and all the fun days working Saturdays at the shop.

One might think I would have acquired some bike repairing skills after all those hours, but such is life. Back to the house for more packing and then a few modifications on the RV including hanging a clothes bar in the shower and hanging some pictures.

Friday, I was up early seeing PJ out the door for her last commute into ServiceNow to turn in her computer and sign some final paperwork. Officially Retired!!!

No more deal reg’s, quotas, MBOs, QBRs and the never ending daily surge of e-mails, deadlines, evaluations and critical feedback. Things I’ve heard so much about, I feel as if I was a software company employee as well.

During the exit interview process, the HR girl told PJ that she liked the bling on her badge holder, so Pea happily took it off and handed it to the surprised young lady.

After one last stroll through cubeland, PJ turned her back and walked out the oversized glass doors for the ultimate time.

Meanwhile, I was heading over to Warner Muffler to see if the crew there could reinforce the hitch and add a little outrigger going into a second receiver for a little peace of mind when hauling my big awkward surfboard rack down the pot holed highway. 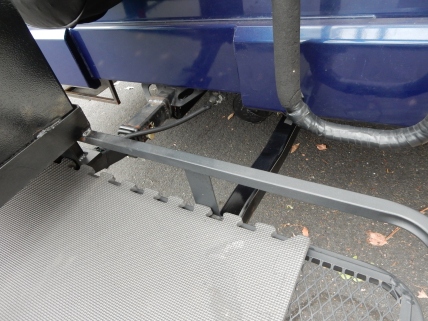 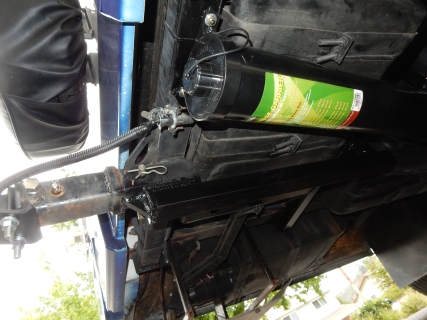 When I watch it in my little rear facing camera  going down the road, the unit is waving and bobbing around like one of those big blow up stick figures at the car dealer. My mind kept going to the visual of the whole thing cracking off, with me watching it skidding and rolling in the rearview mirror down the scorching hot pot holes of a Honduran highway then being swallowed up under the wheels of a growling eighteen wheeler with a row of dingle berries above the windshield and lots of chrome, moon tape and bling on the front grille.

Brett got me in for that afternoon and my good friend Chuck was willing to make a break in his busy morning to shuttle me back to Via Marta. At the house, I started in clearing out  the cabinets in the garage. Lots of good stuff along with the funky. Made a give-away pile for my contractor friends and hope some of the things can get put to good use. After PJ came home and we had a minor celebration, I was off to the dentist for a quick check on a tooth that has become a little sensitive to cold. I saw Dr. Bell (the younger) it’s a family business where the son Brandon recently finished dental school and joined dad, Geoff in the practice. They are both avid surfers and have a place down in Pavones where they like to get away and surf. Awesome people, great dentists. We took some x-rays and poked, prodded, tapped and blew air on it and decided I could go without immediate action and keep a watch on it. After that, it was off to the paint store to get the paint for the crew coming tomorrow. The original beige house paint was a color from Frazee in Oceanside so I figured I’d go there to be certain of a good match. When I got there, Frazee no longer is in business. A Sherwin-Williams had taken its place, but the kid there promised he had the same formula and that the paint would match. For the green, he just took the little patch I cut out of the wall and put it a refractometer looking device and it spit out a color formula to match. Modern technology. It was taking too long and Warner’s was close to closing, so I ran out of there and got PJ and we picked up the motorhome. I went back, grabbed the paint, stopped at Pollos Maria for a couple burritos, went home and we worked until midnight getting ready for paint tomorrow.

Saturday, Roberto showed up around 7:45 and immediately got to prepping and painting. His uncle, Federico showed up not long after and they moved like painting machines busting out the paint job. It was amazing how quickly and efficiently things were going. I would still have been mixing the paint at the time they had two or three rooms covered. Once they got started, PJ and I drove up to Oceanside to pick up the U-Haul truck we had reserved for the day. 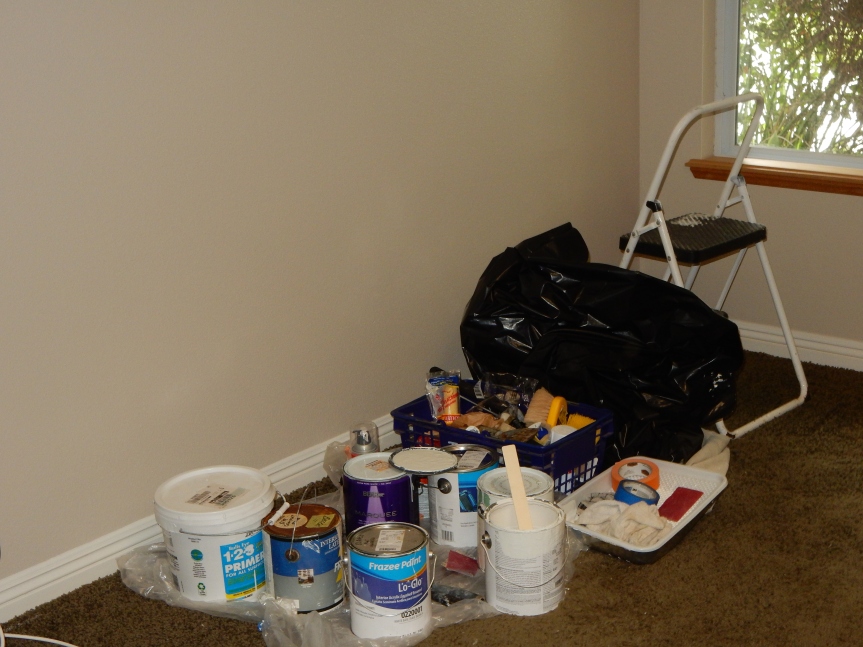 Coast highway was closed down for the 4th of July parade and they diverted onto South Pacific. We had to drive about a mile past our destination and then cross to the other side of 101 and return on a side road on the east side. At the U-Haul place we had to enter through the exit where a bunch of people were trying to come out with trailers hooked up to their cars.

We picked up our filthy, dented box truck with the broken sun visor flopping down in front of the driver and took it home to spend the rest of a hot and sweaty day of manual labor. No need for details. Grunt and load, grunt and take one little wheeled cart at a time up an elevator and figure out how to pack it into our little units. At the end, we were racing back to beat the 8 hour cut off time for the rental to avoid paying an extra day. In the end, exhausted and grimy, we got it back with 15 minutes to spare and checked it in with the grouchy kid at the rental yard. Oceanside U-Haul = 2 stars max. Do yourself a favor and find a better outlet that might actually maintain their vehicles. Back at the house, the painting crew had finished up for the day and we took a brief breath and went back to work.

At 6:00, I showered up and headed out to San Marcos to meet with my family at Fish House Vera Cruz. My cousin Tommy and his wife, Debbie are visiting from Wyoming and Dad and his lady friend Sandy arranged for everyone to meet at restaurant row for dinner. Great conversation, great food. I rarely see my cousin, so it is always a special treat. For that matter, I hardly see my older sister Christine, so that was special as well. Both of my sisters were there along with bother in law Lee and Christine’s friend Rock. Unfortunately, I forgot to bring the camera along to get photos of everyone. PJ had stayed behind to try to get ahead of things before the painters come back tomorrow. I returned home and we continued until after midnight. PJ’s ready to give up on the whole enterprise, but in the end, zombie like, we soldiered on.

One thought on “Where does the time go?”