Once more, I was up with the sun walking the pooches around the neighborhood. When we got back, I tried to get a little more shut eye but I was excited about today’s visit to Slab City. We slowly got our camp disassembled, I guess a little too slowly as we soon found ourselves running late. ‘How does this always happen’ I was asking myself as we were racing a freight train running parallel along the side of highway 111 heading towards Niland. The train passed us and the front of the train beat us to Niland. Even though we had to turn left down a side street for a ways before reaching the tracks, we still had to wait for the rear of the locomotive to pass. That’s how long they stretch out the trains here in the desert.

We pulled into The Sun Works about twenty minutes late, but no one seemed too worked up about it. People on the Slabs, for the most part, appear pretty laid back. The first thing that was apparent was that the Magnum inverter we wanted to install wasn’t going to fit into the door side storage bay where I had thought to put it in. We went over some options and it would fit under the sink, but I wasn’t too keen on putting it there. In the end, I opted for a different unit, a cheaper Chinese model that Mike has been using without any issues. It has good reviews and since I’m not the full time boondocker, I decided to give it a shot and see how it works. I’ll post a review after some time goes by. It’s a Kisae 2000W inverter charger, about $600 less than the Magnum. We paired it with a Tracer 4215 BN charge controller, not so much to save a few bucks over the Blue Sky, but due to the fact that it has capacity to add more panels later on and the boys are impressed with its solid construction and large heat sink design. We mounted them upside down in the storage bay by the door adjacent to the batteries that are located under the steps. 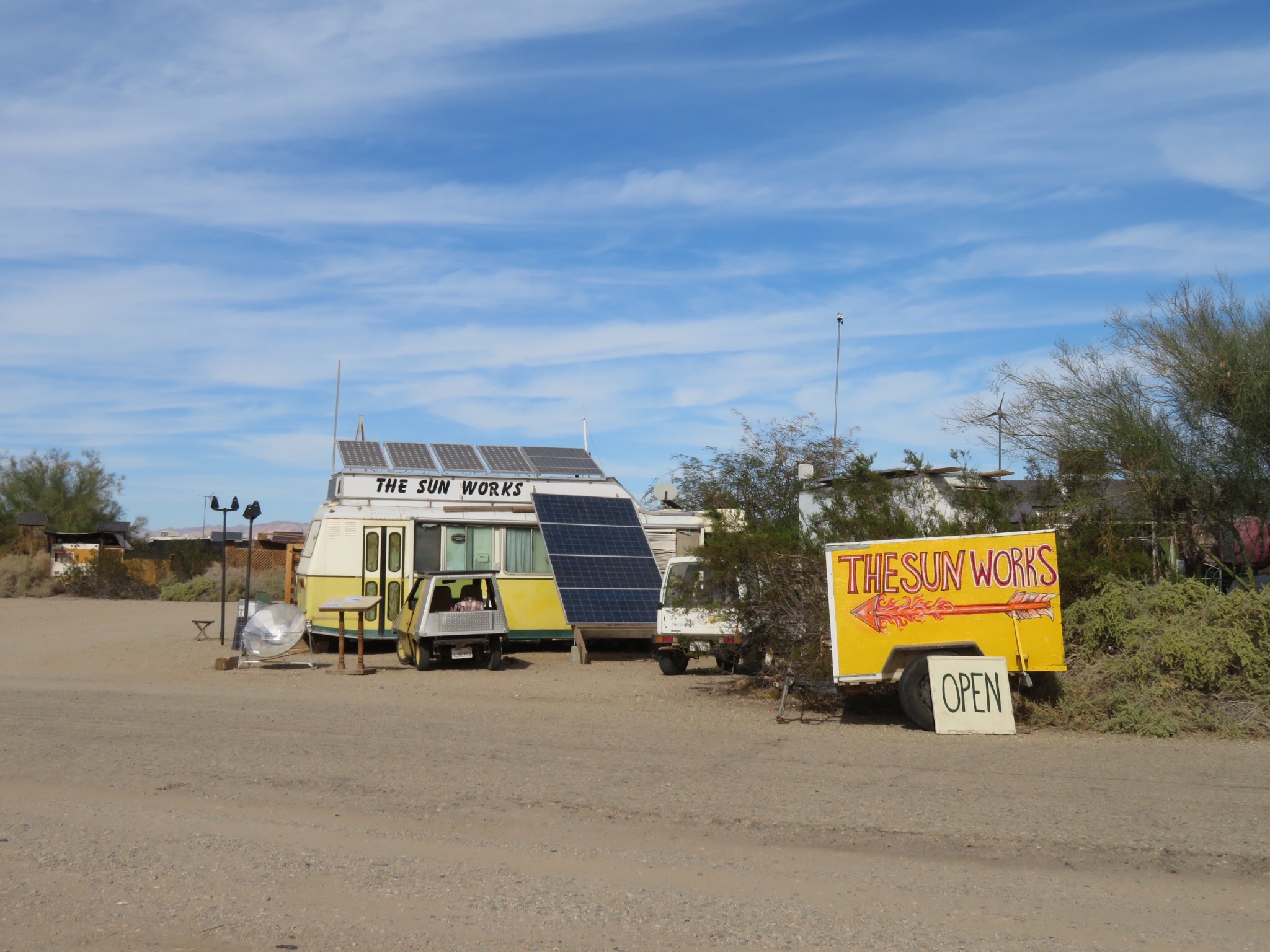 Deciding where we want the panels 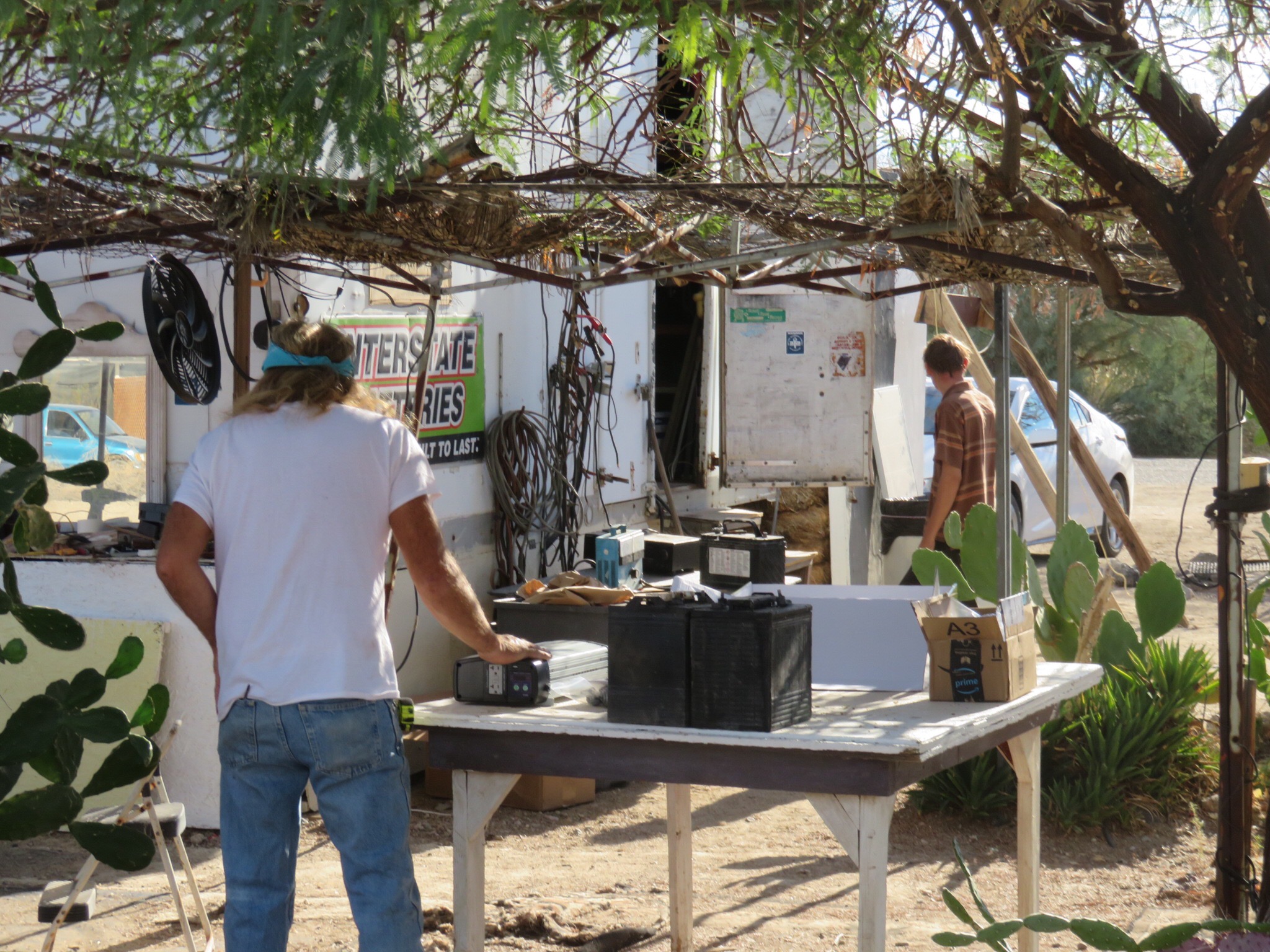 Billy got to work running the wiring while his son, Chance, climbed up on the roof and mounted the two 165W Everbright solar panels near the rear of the RV. Everbright’s another new product to me. Made up in Northern CA, they have a decent reputation and Mike’s been using them for the past year with no problems. With these, I can get away with running two panels in place of the three 100W panels that I had on the Lexington. Those will be powering two Fullriver 224 amp/hr. sealed AGM 6V batteries, yet one more product I have no prior experience with. Thought I’d shake it up and try the AGMs. Well, as the license plate says “TRUST”.

Cali was acting a little weird so PJ took her in the bedroom area while Koda ran free out in the dusty acres making friends with the local pack of dogs. I pestered Billy and Mike with questions and hung around watching the work progress. So went our day. Lounging around in beach chairs, wandering around the slabs and PJ talked on the phone while pacing around the junk pile behind the Sun Works. 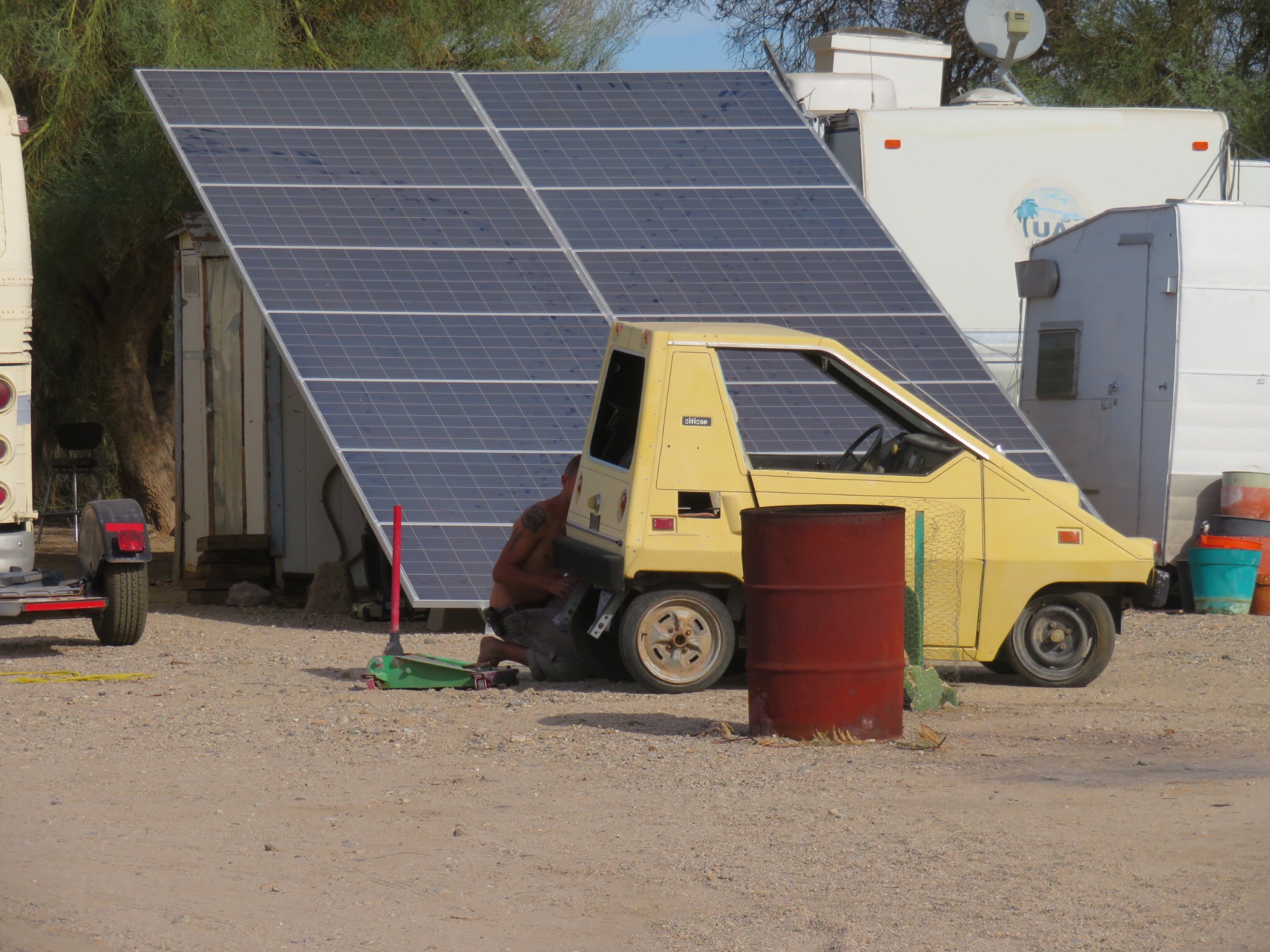 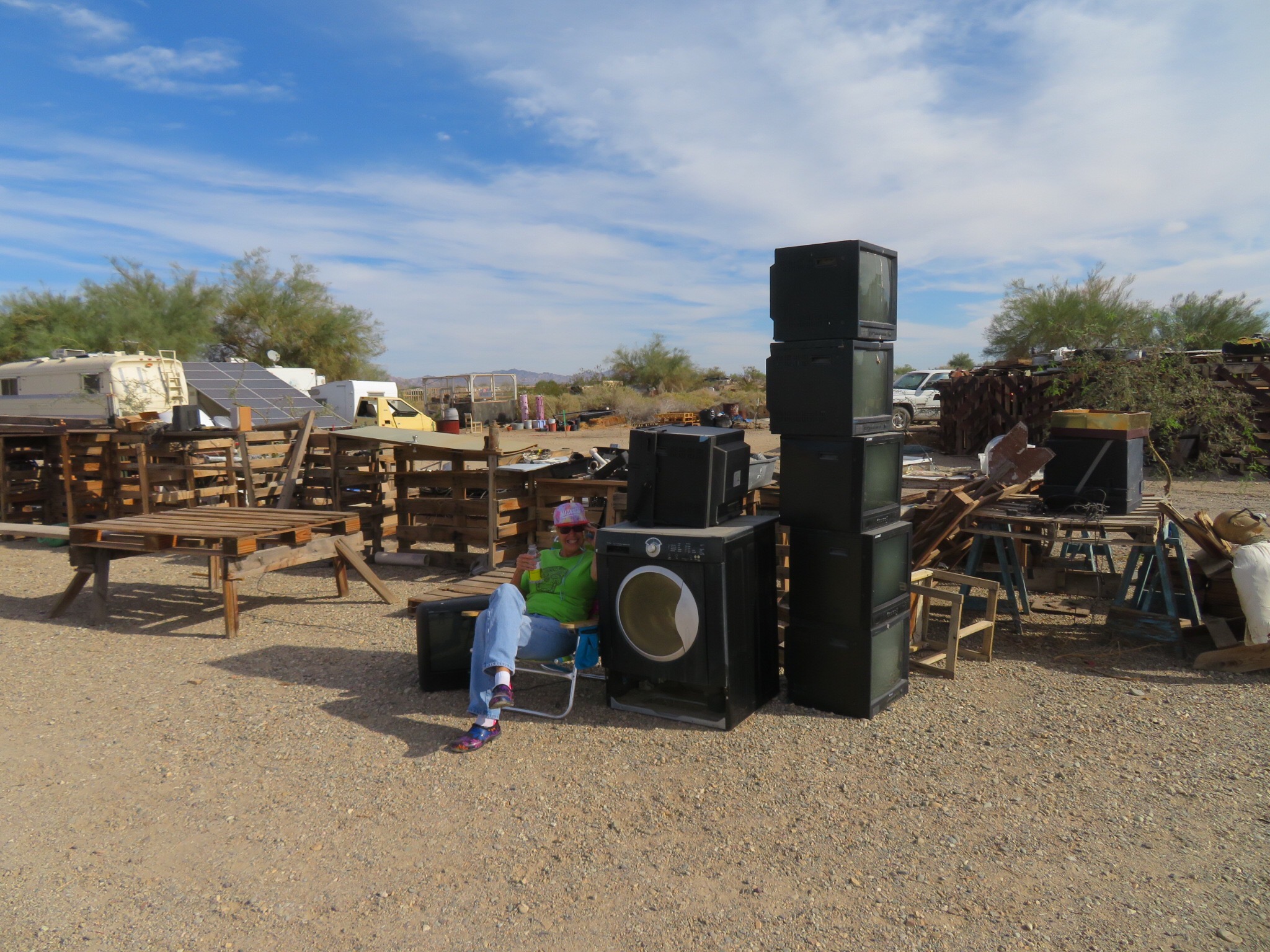 A colorful cast of visitors came and went, some picking up solar supplies, others just saying hello. Mike goes out of his way to support the community and finds odd jobs and clean up projects for those most in need of a few dollars to get them by. He supplies a solar charging station where the Slabsters can come and plug in their devices while sitting in the shade in a recycled chair waiting to get charged up. 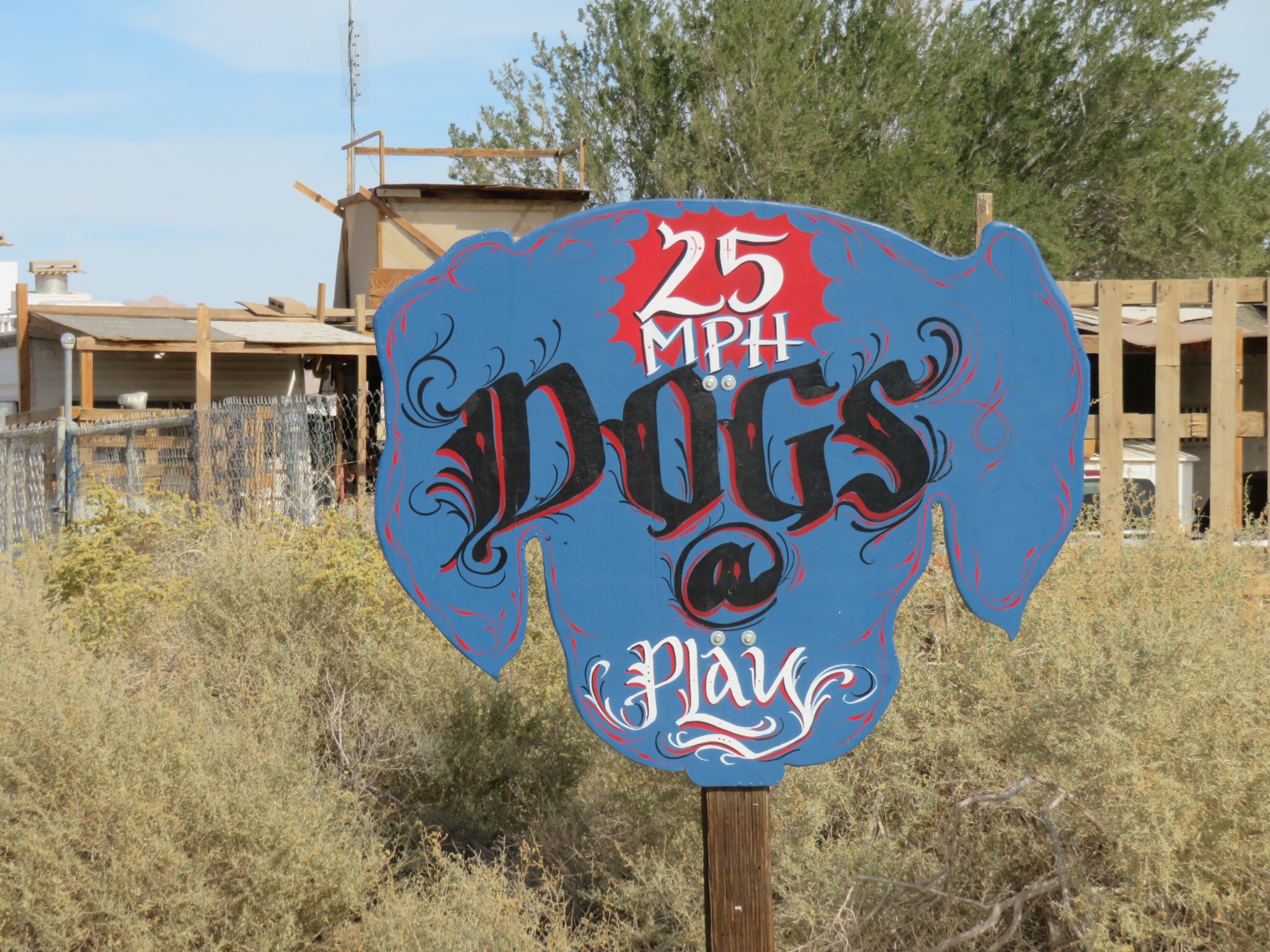 Around 2:30 everything was buttoned up and working as advertised. I thanked the crew, then went into Mike’s bus headquarters to settle up the bill. Then we loaded up the girls and drove over to East Jesus to have a quick peek at the art project over there. We were a little tired and dirty by then so we more or less just did a quick drive by only stopping briefly. 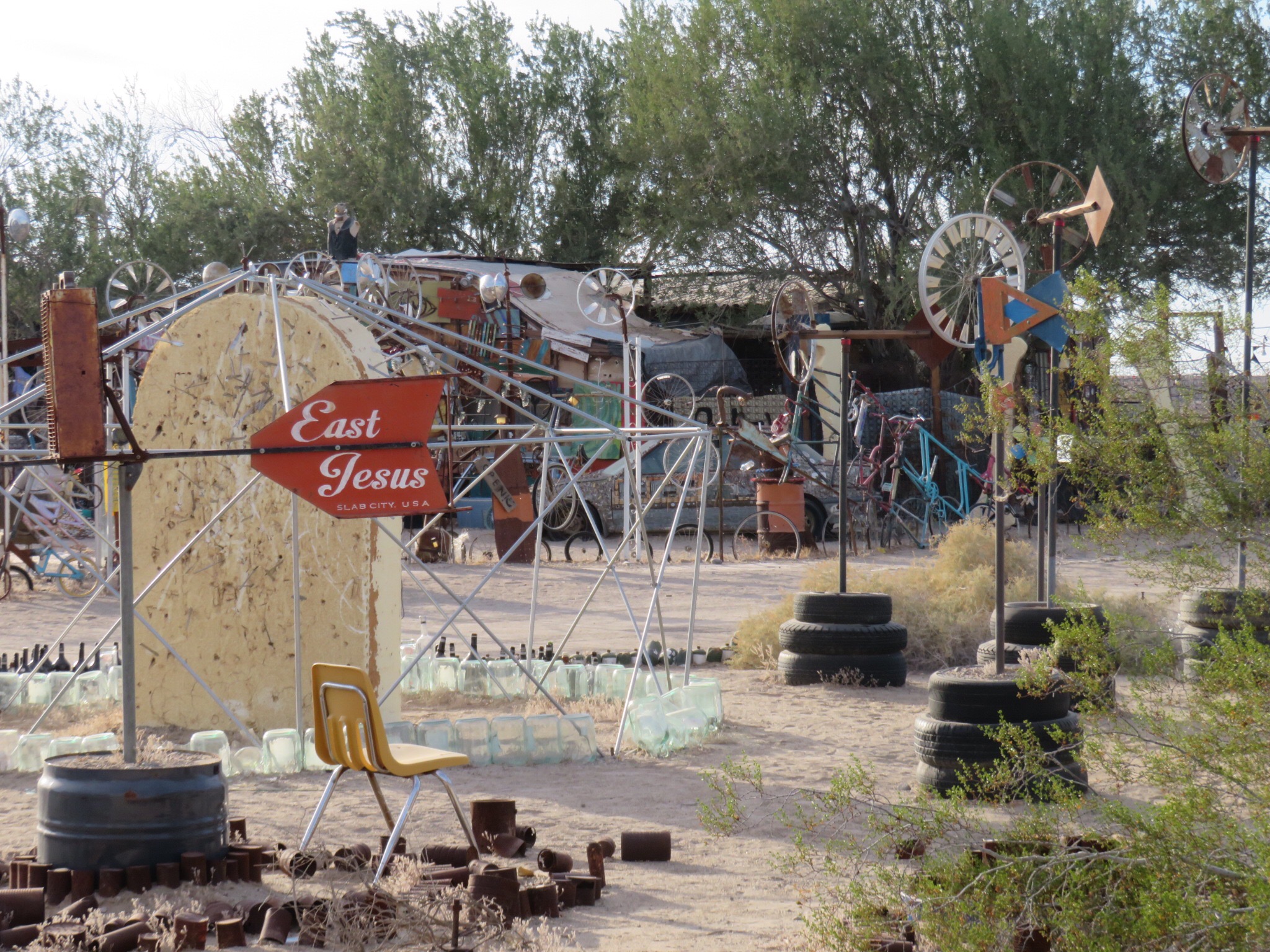 No visit to the slabs would be complete without a stop at Salvation Mountain, the large art installation at the entrance to Slab City. The passion and life work of the late Leonard Knight. Made of adobe, straw and buckets of donated paint, the monument stands out on the south side of the road as you drive by. We parked the RV and meandered around the sculpture for a while. There were car loads of Asian tourists wandering around the mountain snapping tons of photos. Must be in a prominent display in the latest guidebooks. I thought it was more of a local phenomenon but I guess Salvation Mountain has an international cult following. I googled and read online. In one post, someone asks if it’s okay to bring a dog. A helpful expert replies that yes, as long as you keep it on a leash and pick up after it. I’m like, ‘dude, this is Slab City, you could walk a walrus here and nobody’d blink an eye.’ 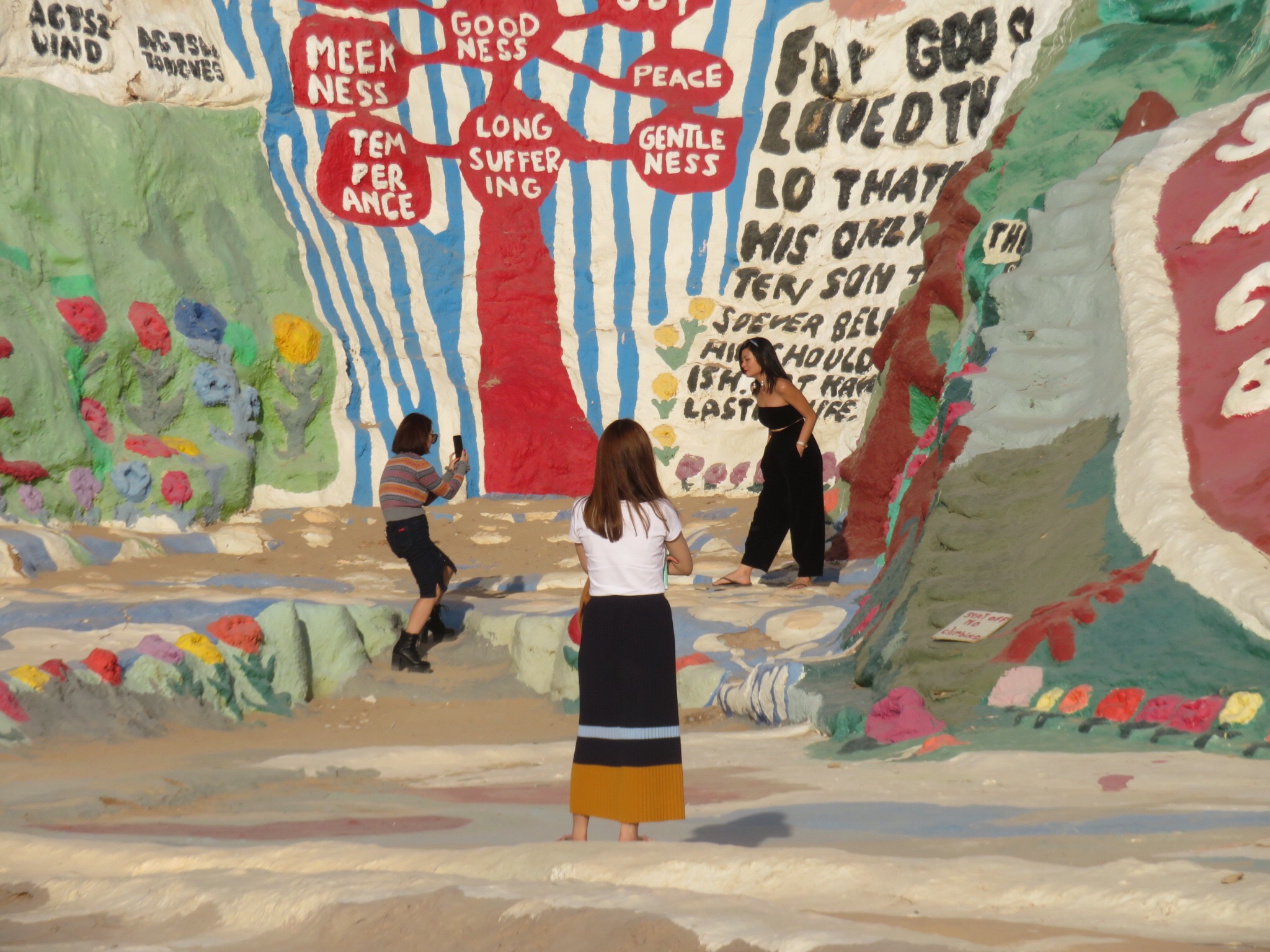 The day was drawing to a close so we decided to roll back over to the Fountain of Youth. No offense to the slabs, but we wanted showers after our day in the dirt. We got slotted into a spot away from the neighbors with a little patio as the sun disappeared behind the lake. We ate some salads, then went for a long stroll through the compound. We returned to the RV, tucked the dogs in for the night then went to soak in the mineral spa. After a soak and a shower we were ready for sleep. 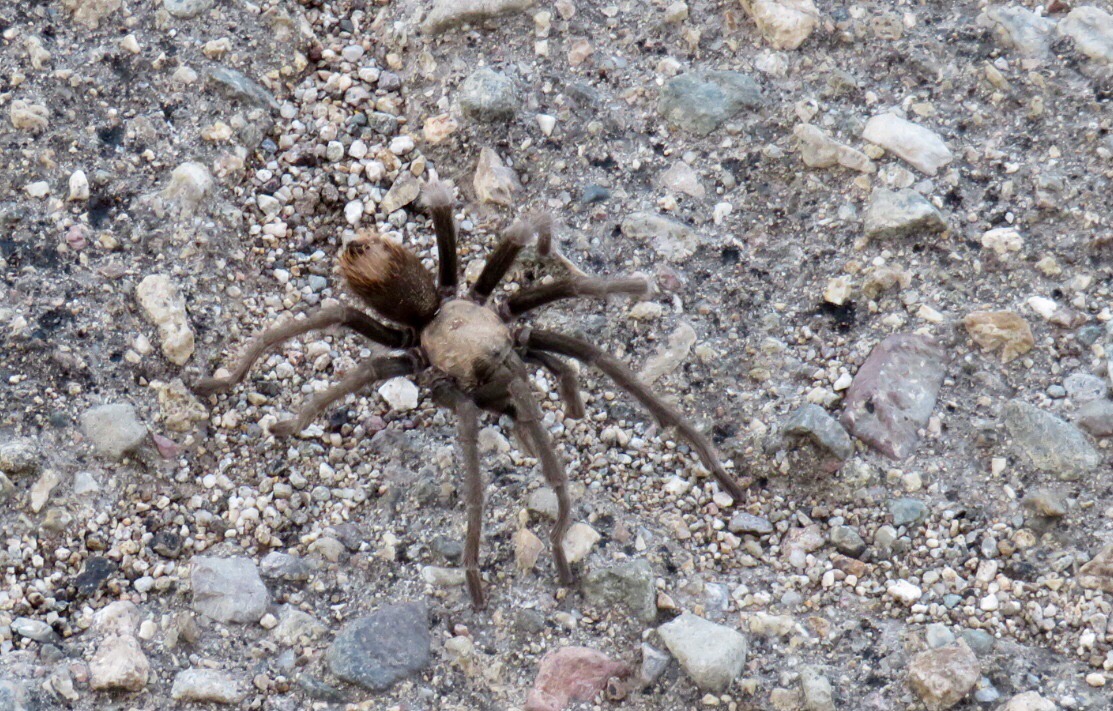 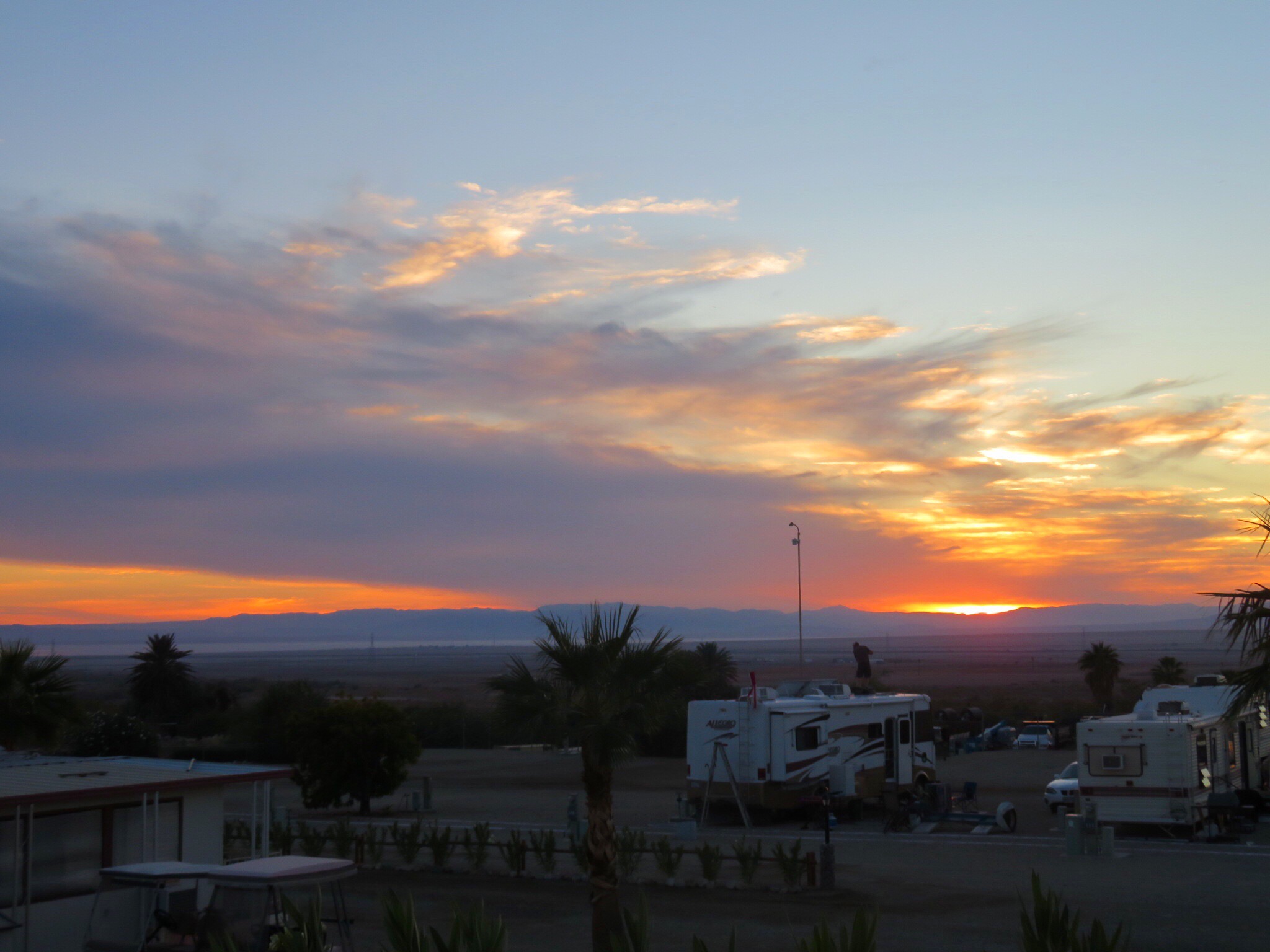 One thought on “Salvation Mountain and Solar Panels”