Another early start as we were determined to begin our final day in Key West with a visit to the southernmost AA meeting in the continental U.S. We rolled the dice and parked the car on a street designated for locals with permits only and attended the 7:00 a.m. book study at the Anchors Aweigh (AA) club house. Lots of cool people and a cheerful way to kick off our last day in Key West. 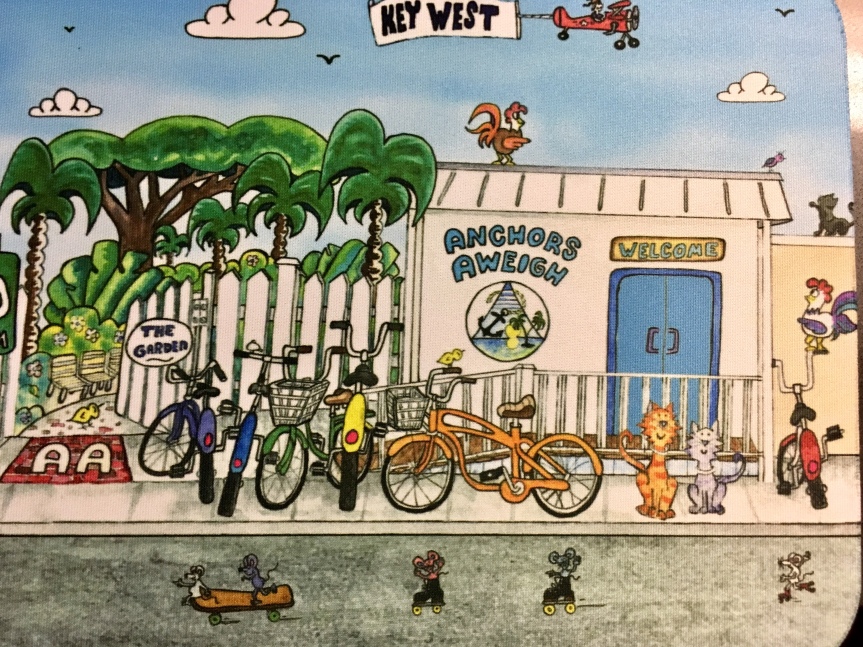 We returned to Boyd’s for breakfast and to pack up our side show in preparation for the return to the Jolly Roger on Grassy Key. The Argentinian clan in the rental RVs across from us were having trouble with their AC, so when I saw the young guys trying to climb up onto the roof from the picnic table, I loaned them the ladder and a couple of tools. Pablo’s my new bro and we’ll be looking him up when we get to Argentina.

The Overseas Highway was scenic and mellow. Not too much traffic and the winds were moderate making for an easy drive. Beautiful green seas with funky little island shacks and marinas along the way. Fishermen dotted the closed down old bridges angling for the fish that congregate around the pilings below. We traversed the seven mile bridge and were soon relaxing in the shade in site #1 at the Jolly Roger.

The gulf was beckoning and we did a paddle down the coast past the dolphin facility checking out some of the beachfront houses that line the bay. PJ picked out her favorite nestled in a little cove among some swaying palms. We spent more time swimming than paddling as we jumped off of the boards and floated around in the water in front of the docks. 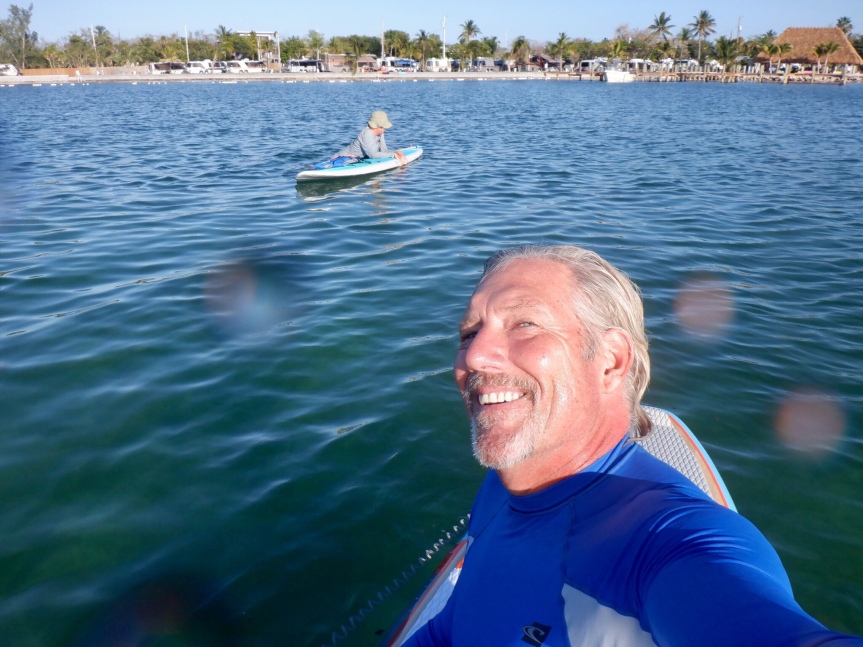 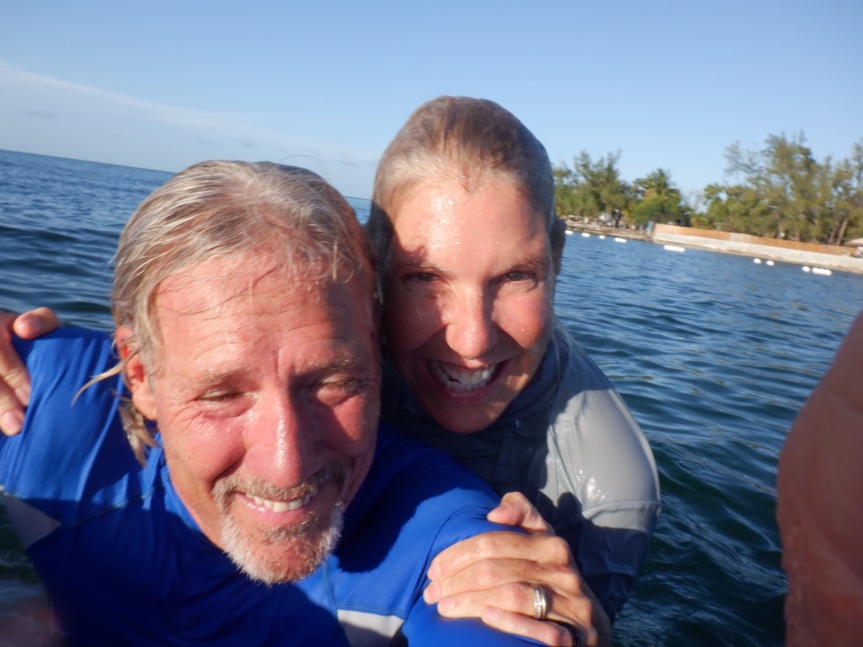 There is a gathering of owners of those iconic old three axled GMC motor homes from the seventies hanging out in the park. They have taken over the big palapa directly across from us where they gather for meals and to socialize. The theme was pirates and many were costumed out growling a hearty Arrrr at anyone passing by. After dinner, they played pirate bingo hollering out pirate words in lieu of the traditional bingo numbers. These folks really love their old wagons and are amusing to watch. 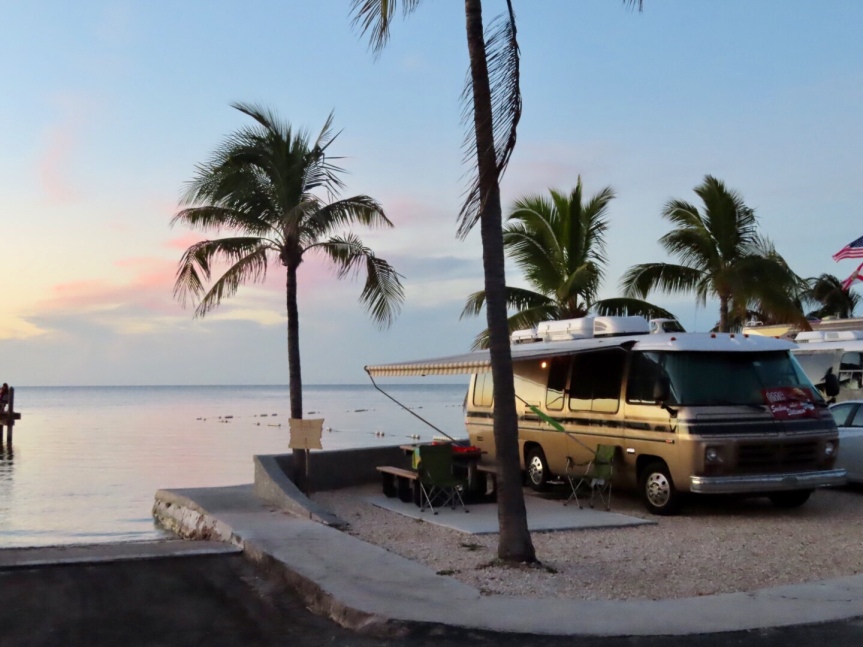 The nightly migration of non-beachfront campers was underway as the sun was lowering itself in the sky. Everyone gathered along Tiki Island or out on the docks to watch the sun slowly slide beneath the rippling water to the west then send a pink backlighting to color the opposite sky when it was done. 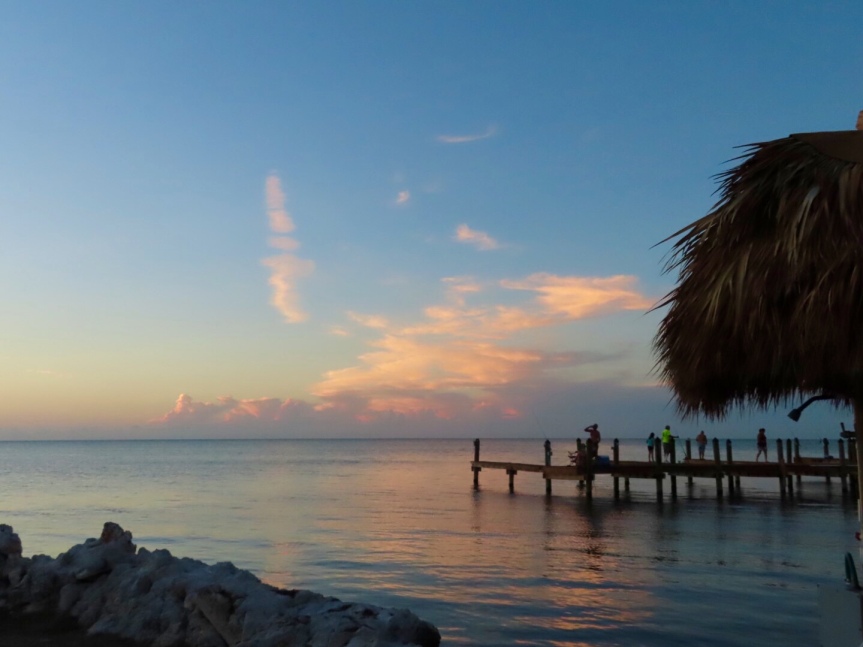 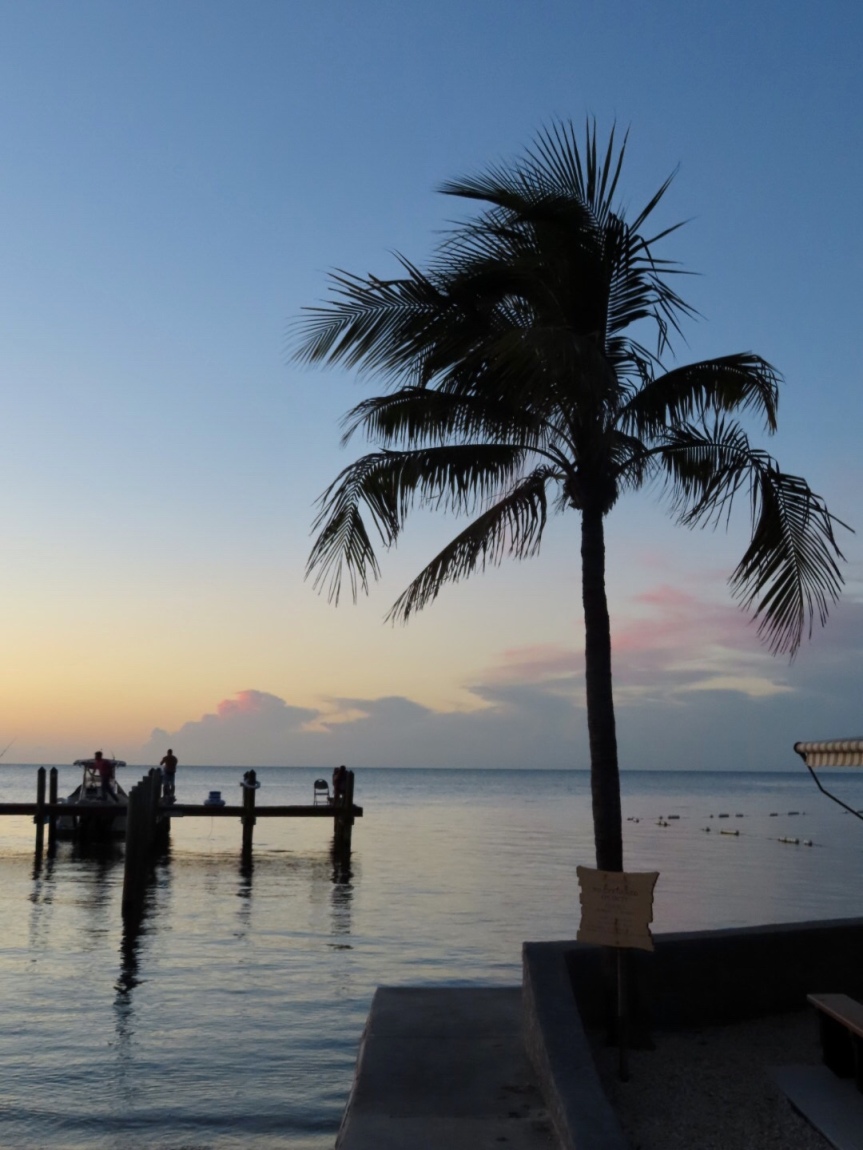 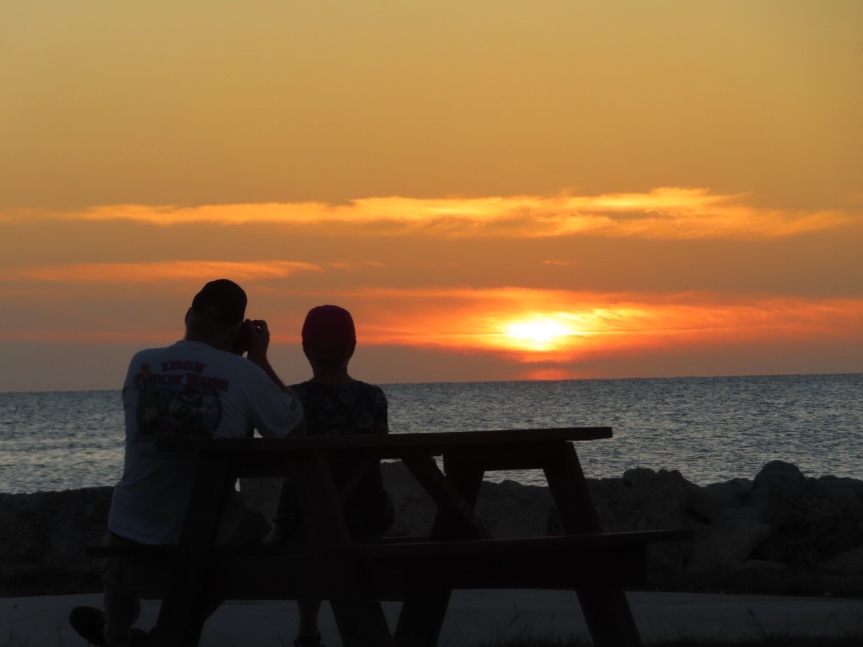 It was a warm night with enough breeze to discourage any biting insects. We sat out on the porch enjoying the night, talking to passing strangers and watching the GMCers having fun beneath the thatched overhang. A peaceful, easy day. 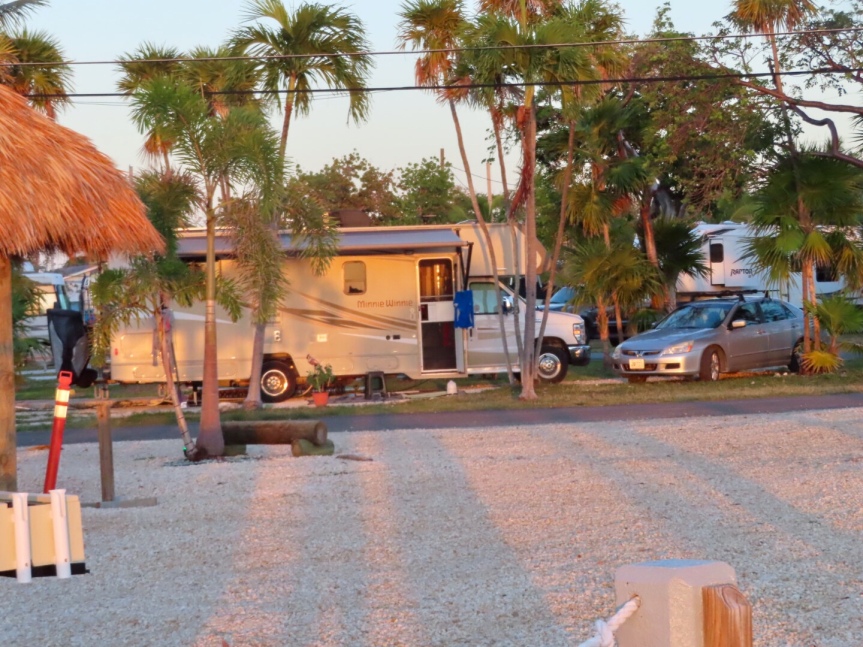 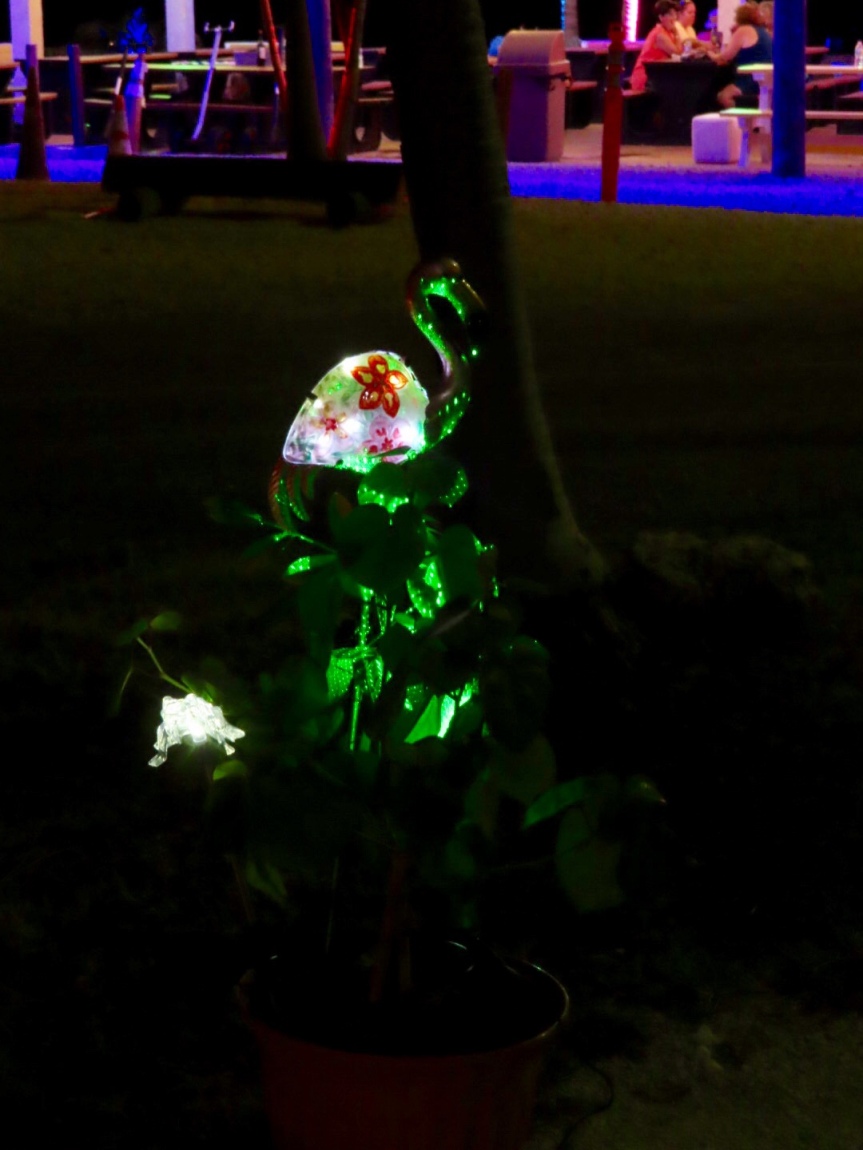