The final overnight on the road turned out to be an interesting ordeal. I said my farewells to Lisa and Joe then hit the road into West Virginia in the late morning. I passed through the rolling green hills of Kentucky into the hollers and mountains of West Virginia. In the late afternoon I arrived at a roadside KOA that was part of a Day’s Inn. I entered the lobby to check in and the front desk person asked me for a West Virginia ID. It seems in their great wisdom, the state has relegated camping in WV to be only for residents. Are they encouraging the local population to get out and hit their nearby campgrounds? It makes no sense. Maybe leave them open to anybody but WV residents so that people needing to get home can have a safe place to park. The funny part is, I asked the lady if I could get a room at the motel for the night and the answer was “oh,sure” and she reached for the register. I said no way would I stay in a room where I have no idea what person was coughing up a lung in there and spewing viruses everywhere the night before. Madness.

I kept driving into Maryland, but it appears that they, too, have enacted similar measures and camping areas were all closed. Lawmakers and those who make these decisions need to realize that over one million Americans are full time RVers. As I drove on into the night, it began to look like parking at a Flying J truck stop might be the only recourse. At about eleven, I saw a KOA sign at an exit that also featured a truck stop on the other side. I drove up to the campground. It was closed but a few RVs were still camped up and the gate was open. I pulled into an empty spot and just fed the pooch, walked her then hit the sack. No one bothered me and I was out early the next morning. Thank you leaving the gate open and being there.

Last time I passed this way, I promised myself that if I ever came through again that I’d stop to check out the battlefield at Gettysburg. I punched it into the GPS and arrived at the national park and drove through the different sites and areas where the battle took place. There were monuments for all of the battalions who served and it was a beautiful grassy area. The battle went through the peach groves and wheatfields of Pennsylvania. 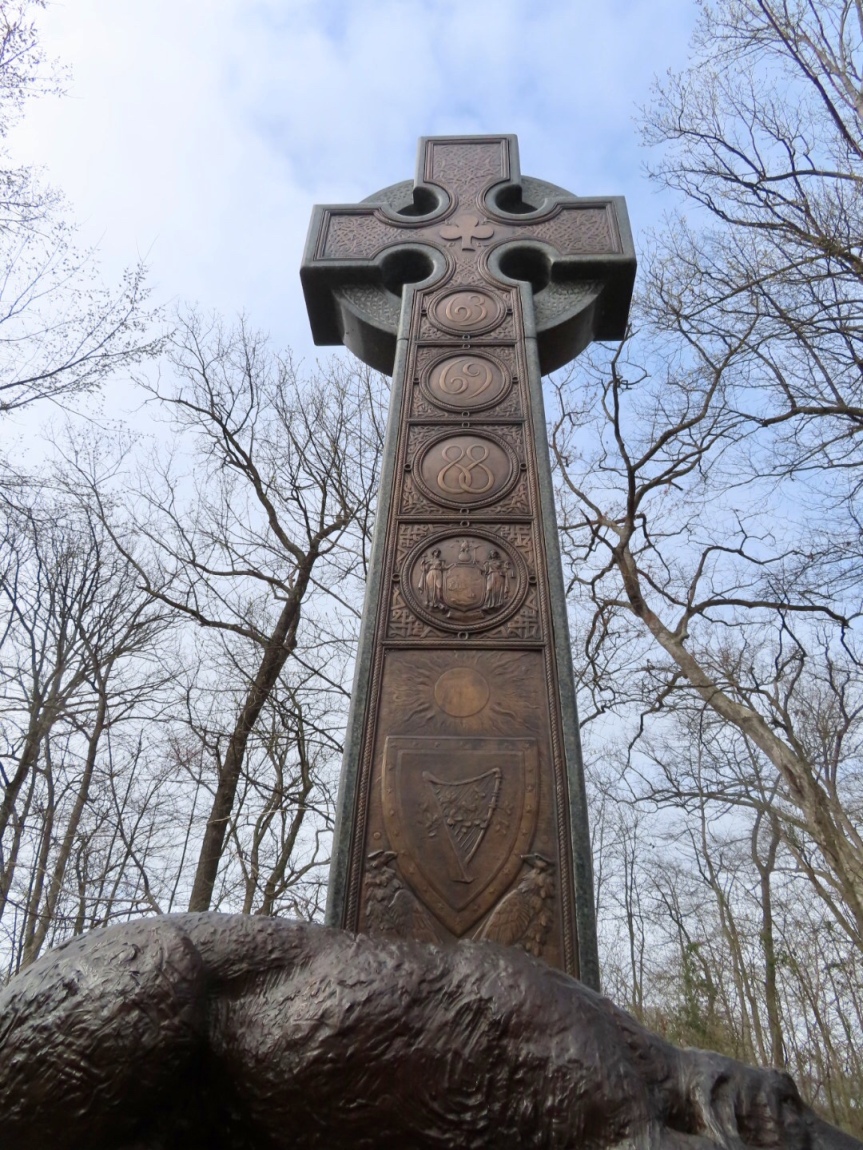 There were very few other people out. Locals bringing their dogs for a walk and one or two tourists like myself. The park is so large and spread out that it was easy to stay far from any fellow park visitors. I wandered the many acres reading placards and checking out statues and monuments.

At a rise on a hill, the cemetery overlooks the valley. This is the spot where Abraham Lincoln gave his famous oration. The governor of Pennsylvania visited the battlefield after the carnage and saw poorly dug graves and many bodies still unburied. He made it his mission to make a proper monument to those who gave their lives at Gettysburg. They reburied and properly cared for the dead and built the memorials at the site. It took five months to complete and when it was finished, that was the day the president visited and gave the Gettysburg Address. Interesting stuff. 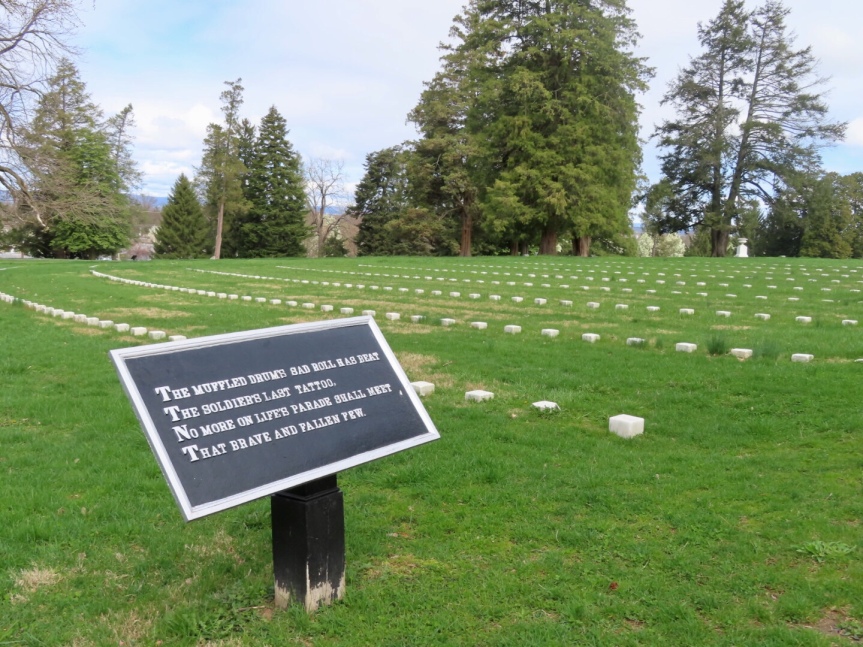 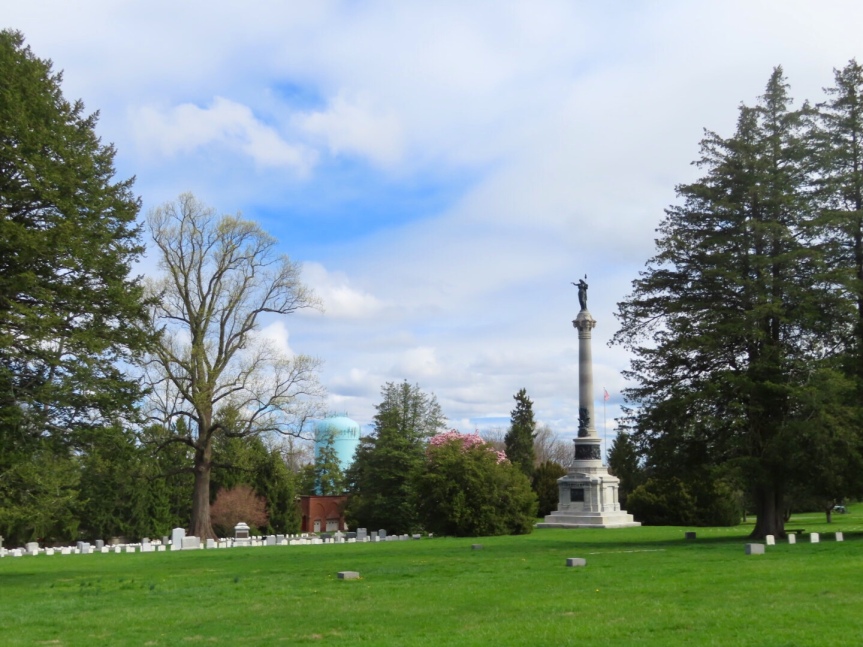 The town of Gettysburg is quaint and picturesque also, although for the most part, completely shut down. I gassed up, had a look around and headed towards a nondescript RV Park where we had stayed before in New Jersey. As I drew near, it was still mid afternoon and there was really no appeal to stopping so I just pushed on for Rhode Island. The TappanZee Bridge is always a milestone for me. As I crossed the Hudson over its wide waters and landed on the potholed streets on the far side, I knew I was close to Connecticut, one state away from my destination.

There was quite a bit of traffic through the western half of Connecticut. Don’t these folks know there’s a stay at home order in effect? I continued through the state until I reached the Rhode Island border. A five state day – Pennsylvania, New Jersey, New York, Connecticut and Rhode Island. As I approached the line, I was pulled into a parking area where I was interrogated as to where I’ve been and where I’m going. They filled out a dossier on me then let me into the state. Not long after, I was pulling into the driveway to see my wife for the first time in three months. Unfortunately, we couldn’t even give each other a smooch. I’m on a two week self quarantine to be sure I’m okay. She was tested for Covid the day before. Despite the distancing, it was exciting to reconnect and be parked up in the neighborhood. Good to be with family and have some time to be together and rest up. 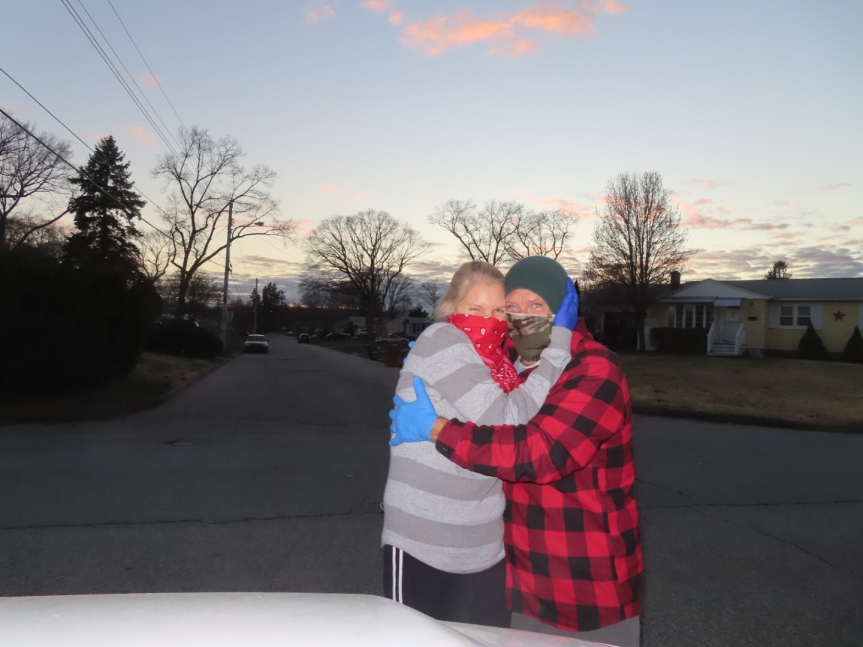