PJ had decided it is time for a touch up on her hair coloring, so she has an appointment this morning over at Janett’s hair salon in the center of town. Janett is the go to stylist in Lo de Marcos famous among the ex-pats as well as the locals. 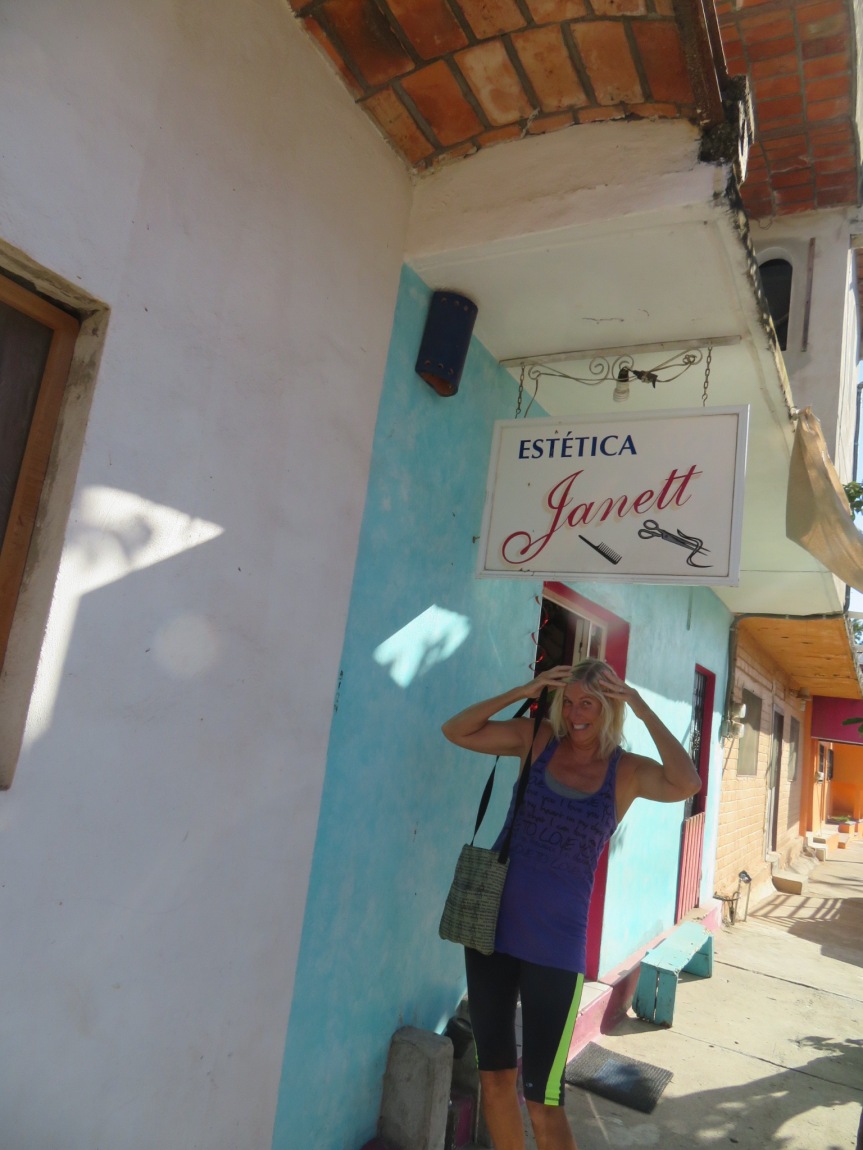 Janett got the tint worked into PJ’s hair then we sat around sharing photos and stories. We were treated like family and learned a lot about the town. Janett has an easy smile and her upbeat outlook is contagious. Her husband is the mayor of Lo de Marcos. We met him briefly as he was passing through the shop going about his business. We also learned that Lety over at Bernal’s market is her sister and that today is her birthday. The timer went off and PJ got rinsed and ready to go. Her hair looks great. 5 stars for Estetica Janett!

We headed over to Bernal’s to pick up some dog food and wished Lety a feliz cumpleanos. If she was surprised we knew that it was her birthday, she didn’t let on. She has an outgoing sense of humor and a quick wit. I filled a bag with the fresh carnitas that the store had cooked up in a big vat out front. Then I noticed that Samuel was cooking up chickens on the bar-b-que next door, so I went over and bought a hot off the grill bird with all of the fixins – rice, salad, salsa and a stack of freshly pressed and cooked tortillas for 120 pesos. We pedaled our way back to El Pequeno Paraiso and I ate chicken and carnitas tacos while watching all of the vacationers enjoying their day at the beach.

We rested a while getting ready for our trip into Bucerias later tonight. At 3:00, we braved a foray out to the beach. We weaved our way through all of the campers down to the patio where the open mike is usually set up. The families camping here have turned the area into a big kitchen area for everyone. Meals were being cooked up and over at the bar, Nancy and Maga were supplying cold beers to the thirsty visitors. Maga had a few of her artwork creations hanging on the palapa so PJ picked one out and bought it. Support your local artists! 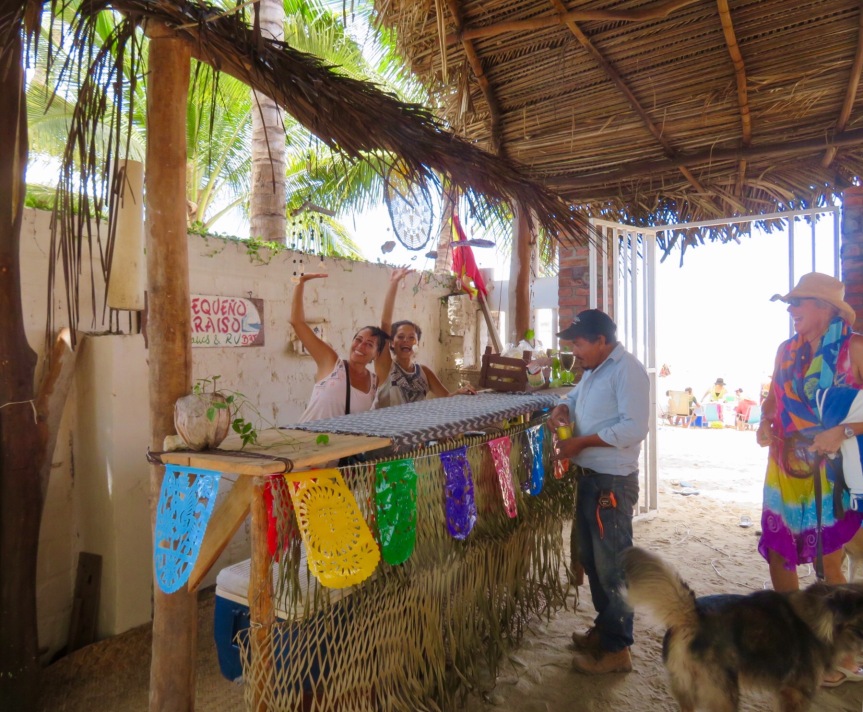 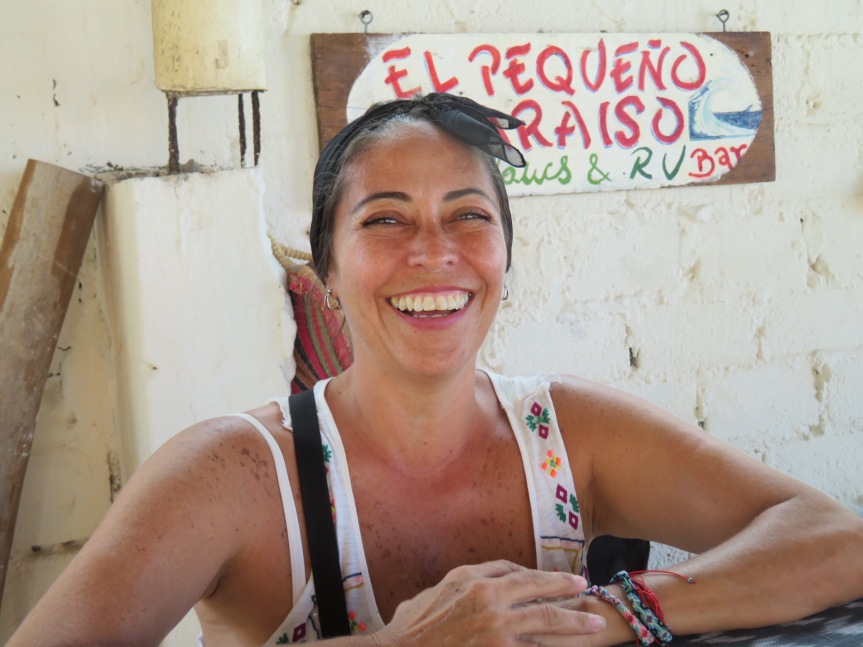 It was hard getting to the water as people had erected an unbroken line of tents and overhangs neglecting to allow any space between for an average Joe like myself to make his way onto the beach. We walked through some people’s zone and hit the water. PJ took the dogs for a walk out to the point and I strapped on my goggles and went for a swim. There were some jet skis ripping around to the right so I swam straight out to the anchored boats then swam out to the rocks at the end of the point. Some decent little waves were pushing through and a few local kids were making the best of them. 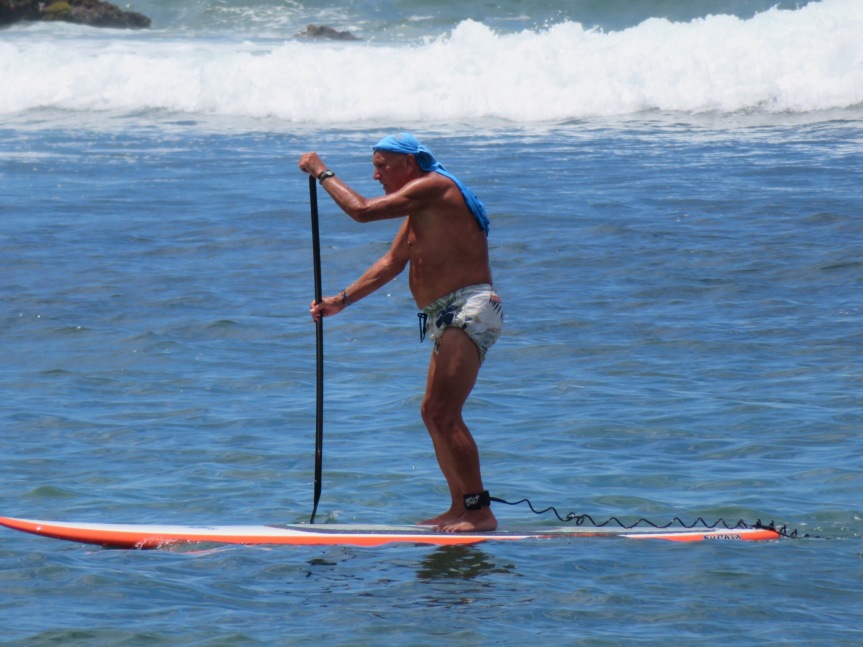 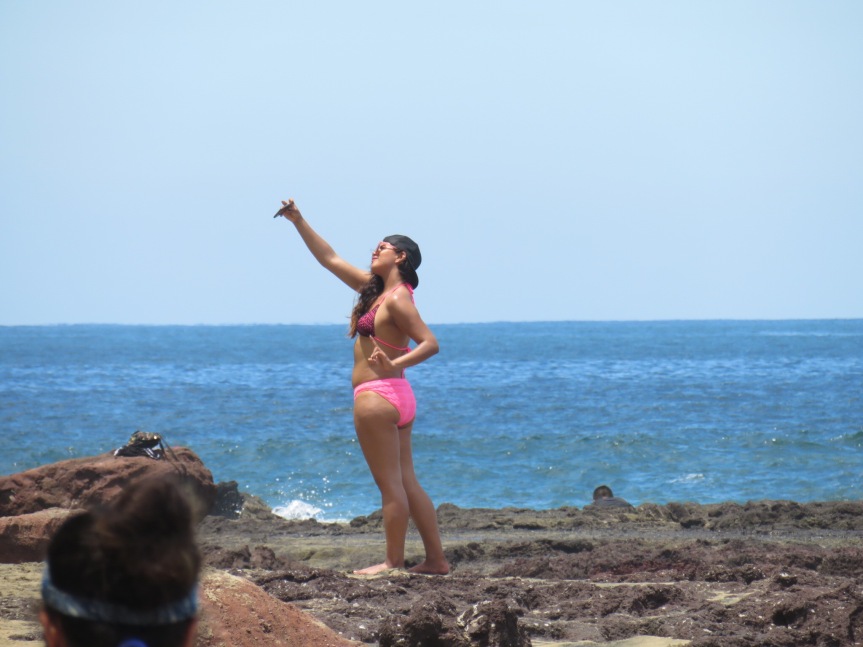 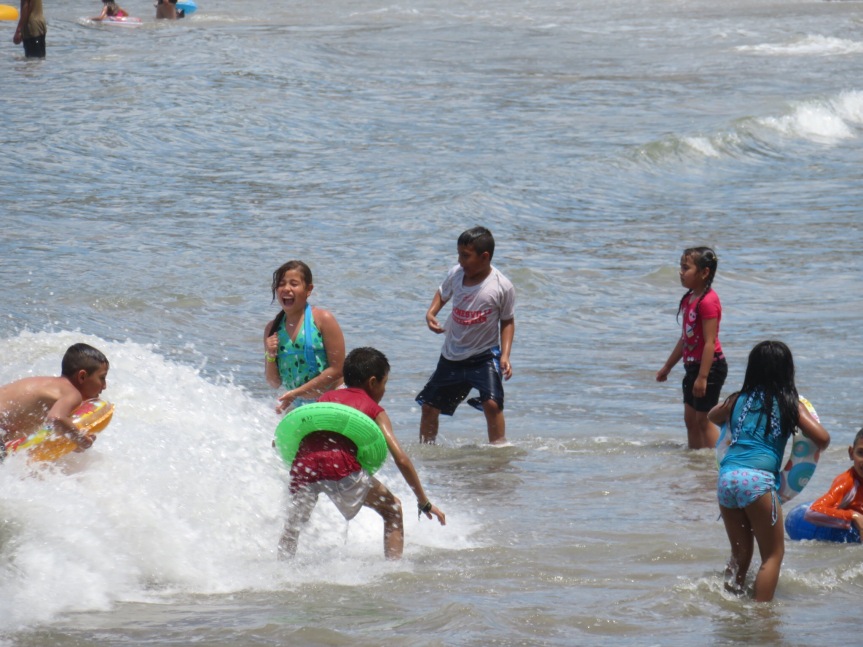 I swam in, rounded up PJ and the dogs then rinsed off and put on a collared shirt. We walked into town and caught the green bus into Bucerias. We only had to wait 20 minutes and there it was. A quick and easy ride. We hopped off at the centro and wandered around checking out the beach activity in Bucerias. It was really windy which seemed to discourage the waders, but out in the open ocean, sail boarders and wind surfers were taking full advantage of the strong gusts. 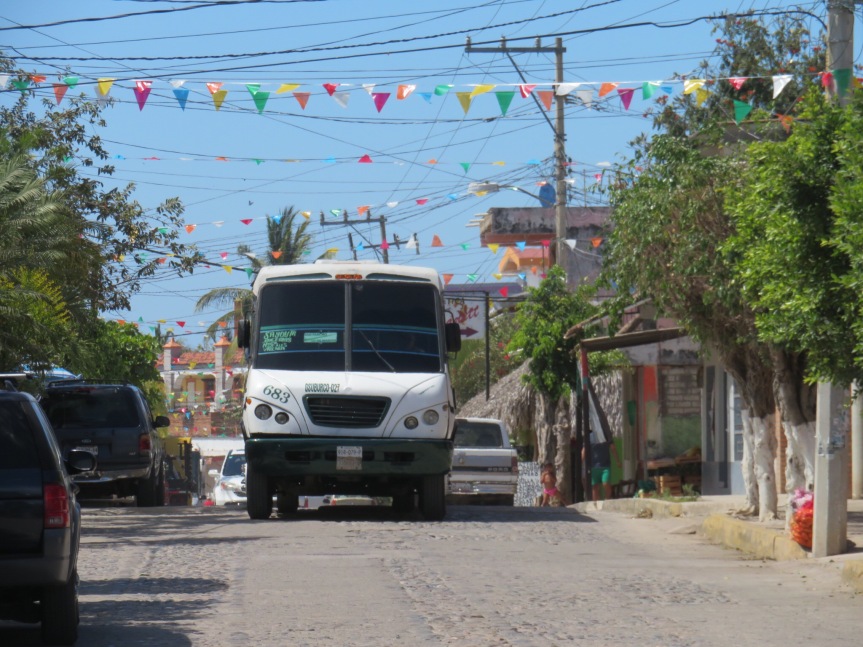 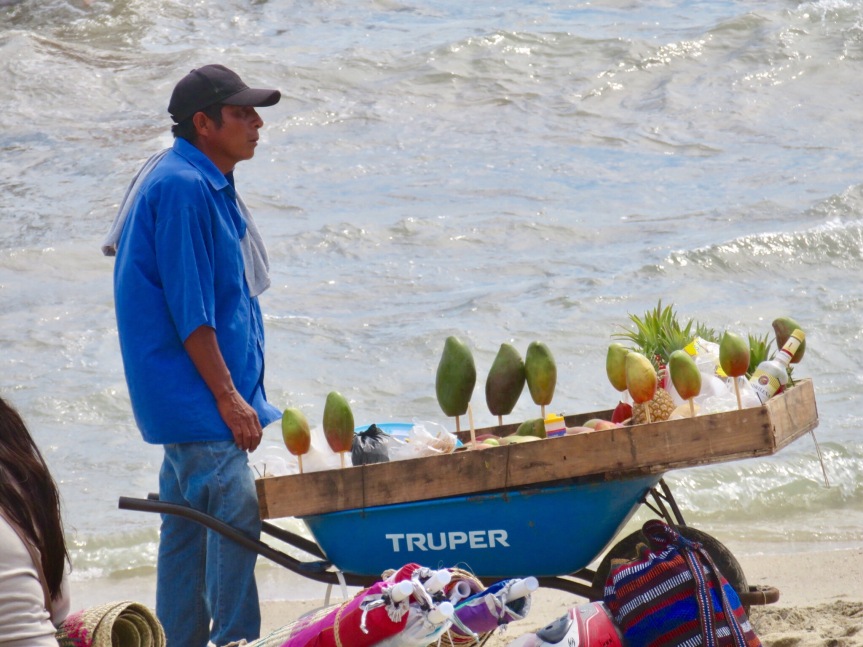 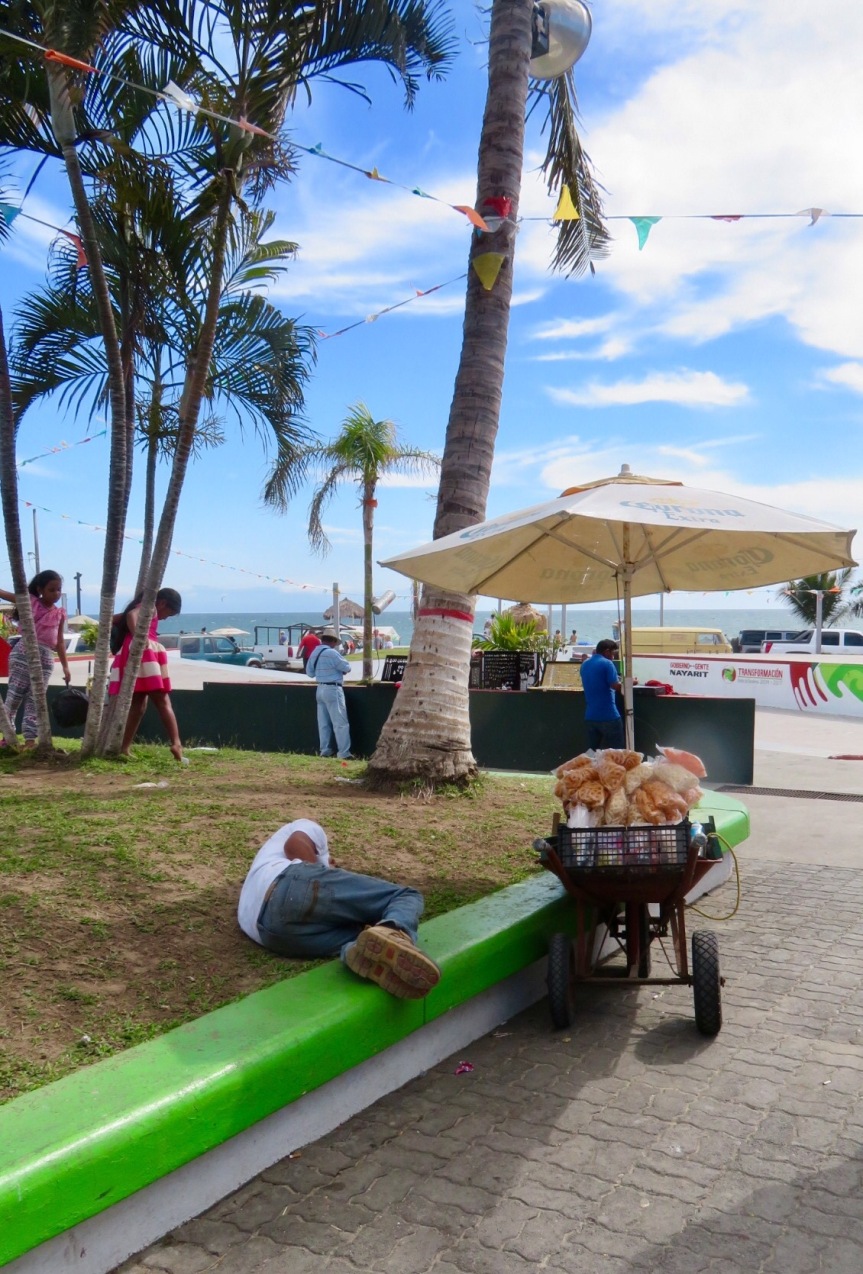 We had some time to kill before meeting our friends, so we did a little shopping for things we can’t find in Lo de Marcos. We sat in the shade of the cathedral and drank a cold water, then sat quietly in a pew for a few minutes giving thanks. 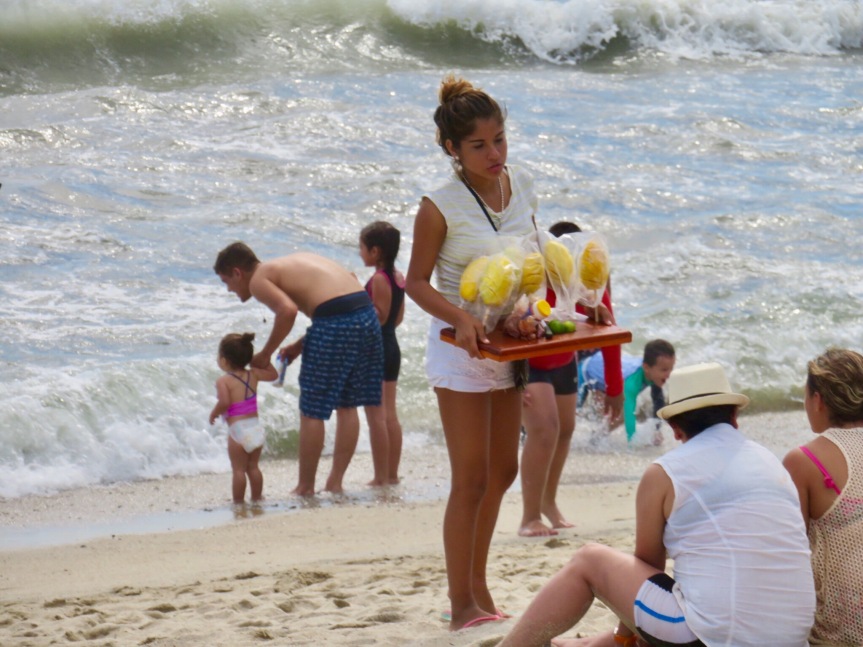 We met up with our friends and caught up on things. As the evening shadows lengthened, we gathered at Pizzanteria, a nicely outfitted pizza place over near The Drunken Duck. We had about fifteen people and I think we kind of overwhelmed them. The pizzas came in waves starting at one end of the table and slowly arriving right to left in the order that the waiter had written them down. I think the oven could only fire so many at a time. No problem as we were more about the conversation than the pizza (until it finally arrived that is!). Good pizzas, lots of talking and tons of leftovers. Said our goodbyes to people who are heading home soon. Vaya con Dios and as our friend Ward would say, ‘goodbye for now’. Hope to see you all again soon.

Walked in the dark up to the taxi stand and grabbed a cab back to Lo de Marcos. Quiet drive through the windy jungle road in the night. The dogs were definitely ready for a walk when we got back. The compound was alive with happy activity. Even more spring breakers continue to arrive. Lots of cats driving up and down Calle Minitas, so we opt to get some dust in our sandals skirting around on the dirt roads out back. Pleasantly satisfied from a day well spent, we lounged in front of the t.v. for a while before hitting the hay.