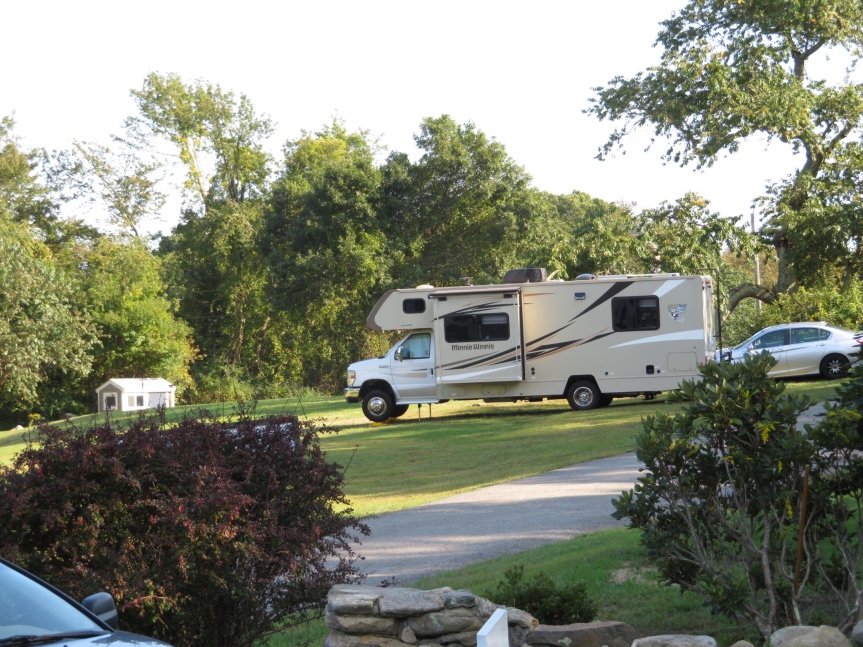 The last weekend of September marked the arrival of the 12th annual Rhody Recovery weekend. We stumbled upon this event last year and were eager to participate in another round of camping on the Great Salt Pond listening to a pair of excellent speakers that were recruited from the west coast this year. 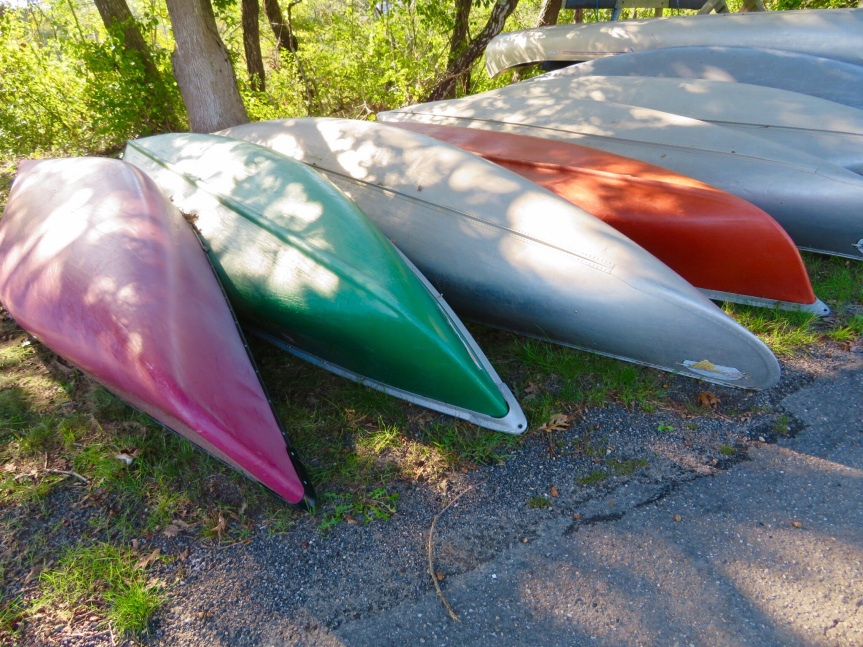 I drove the RV down to the south county in the mid-afternoon and found a nice spot on the grass at Camp Fuller to park up the Winnebago. The first person I ran into was Mike G. who we spent a lot of time hanging out with last year. He is an avid RVer although in between rigs at the moment. Last year we had Lexi and this year I got to give him the tour of Wilson’s more spacious layout. He was stoked for us. I settled in and got the house set up and took some time to unwind and get into a peaceful space for the weekend. 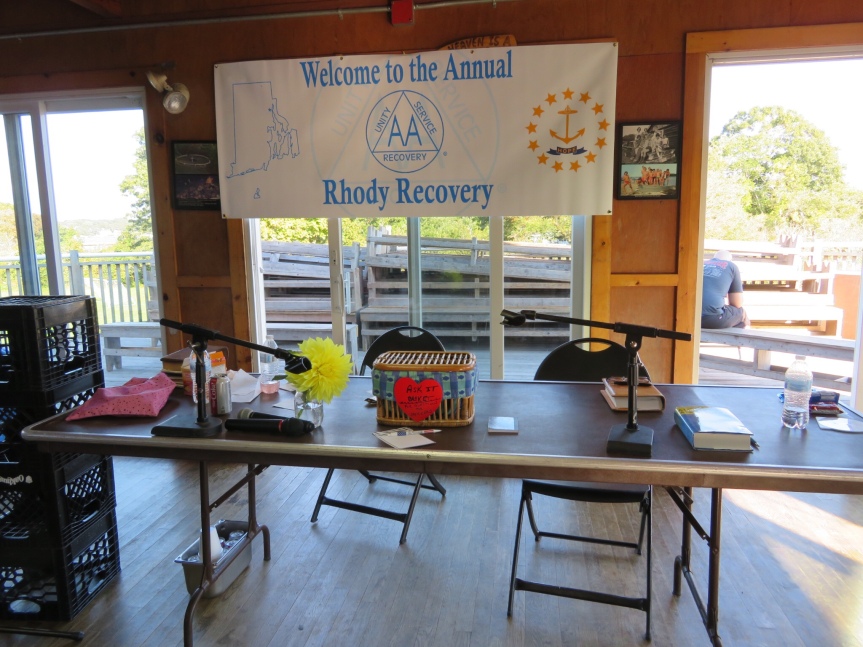 After dinner, I found an open chair near the front and enjoyed some great sharing from the weekend’s designated speakers, a lady with 40some years from central California and a captivating gentleman from Washington state. I’d estimate an attendance of maybe 120 people for the event. The sessions went until around 10:00 then a short meditation was scheduled then a bonfire down in the meadow. I passed on the extracurricular activities and called it a night. 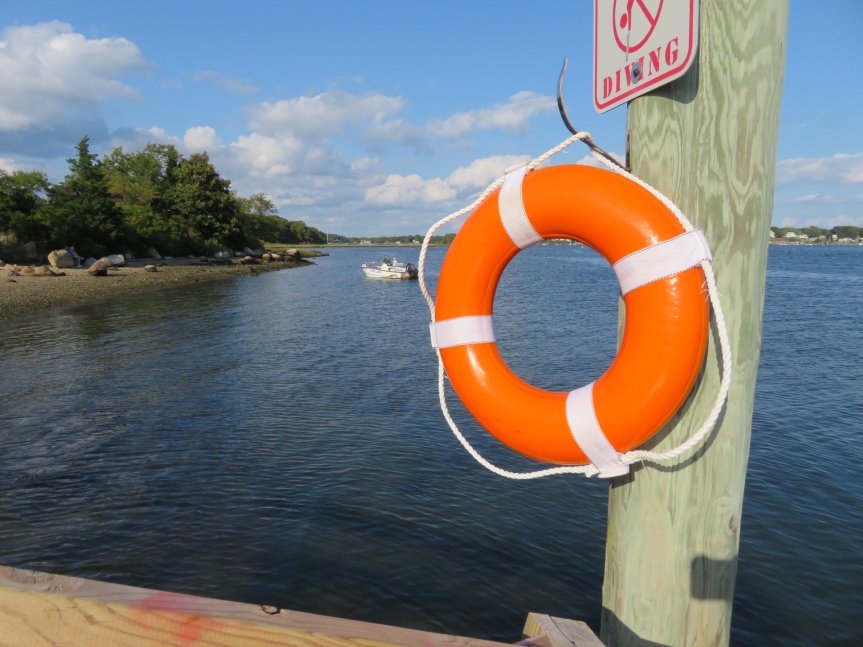 I was up early Saturday relaxing with a cup of tea and enjoying the quiet morning looking over the dew sparkled grass. I went up for breakfast and to catch the morning session. P.J. was able to drive down and join me around mid-morning for the second round of talks and a break for lunch. In the early afternoon, the participants assembled on the soccer field and broke into groups by gender and we did a “whisper walk.” Each person would close their eyes and walk blind through a gauntlet of people who whispered positive affirmations as they moved you through the lines. Hard to explain but a cool exercise. 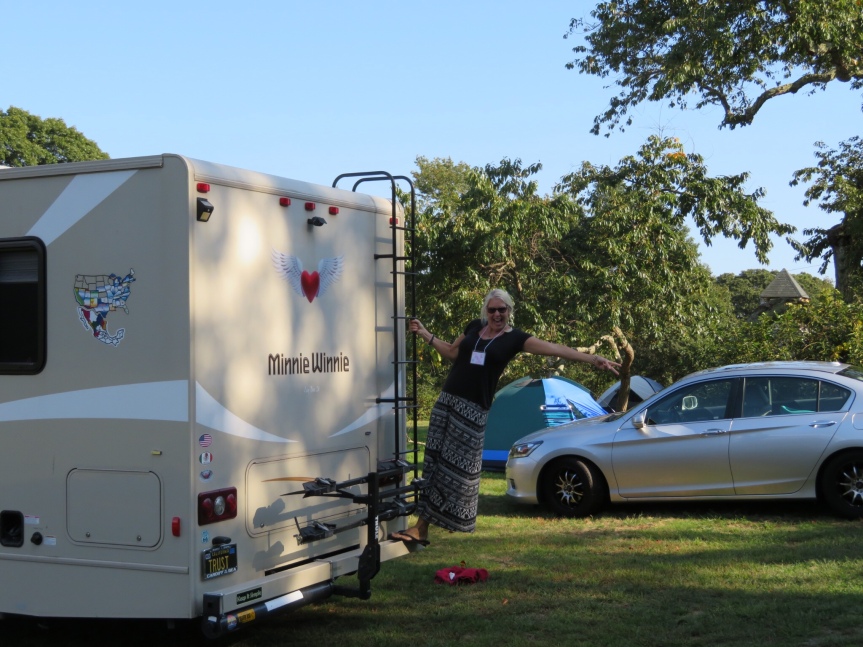 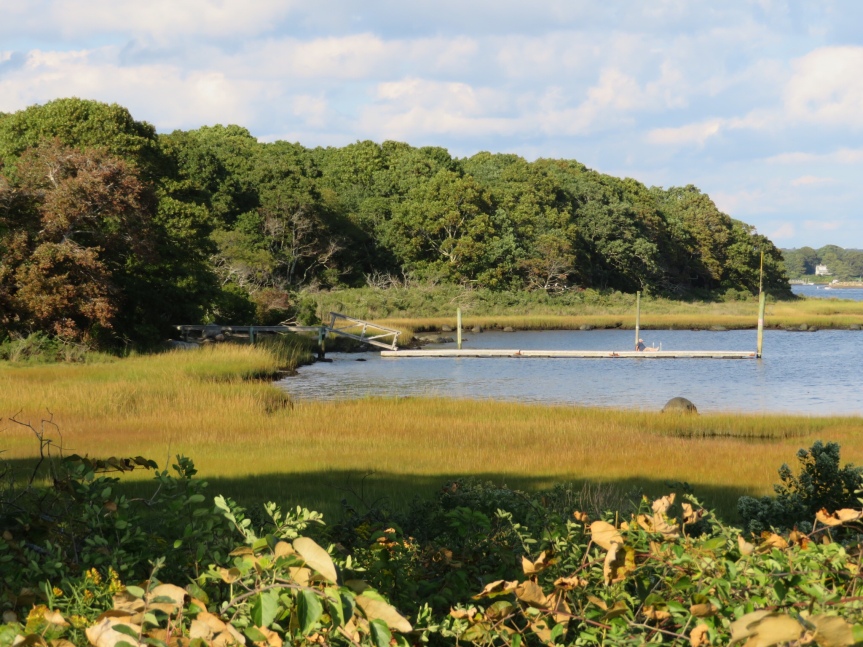 Shortly after, P.J. had to slip out to return to the house and make dinner for Carole. We had some free time on the afternoon so I walked around the dock areas watching the sailboats circle the bay. Camp Fuller has facilities for sailing, kayaking, SUPing and other aquatic activities. Their dock also hosts researchers who keep tabs on the health of the estuary. I sat for a while in the warmth of the afternoon sun watching the local quahoggers digging for the oversized clams then I hiked around the trails taking a few photos and finding a quiet place to meditate. 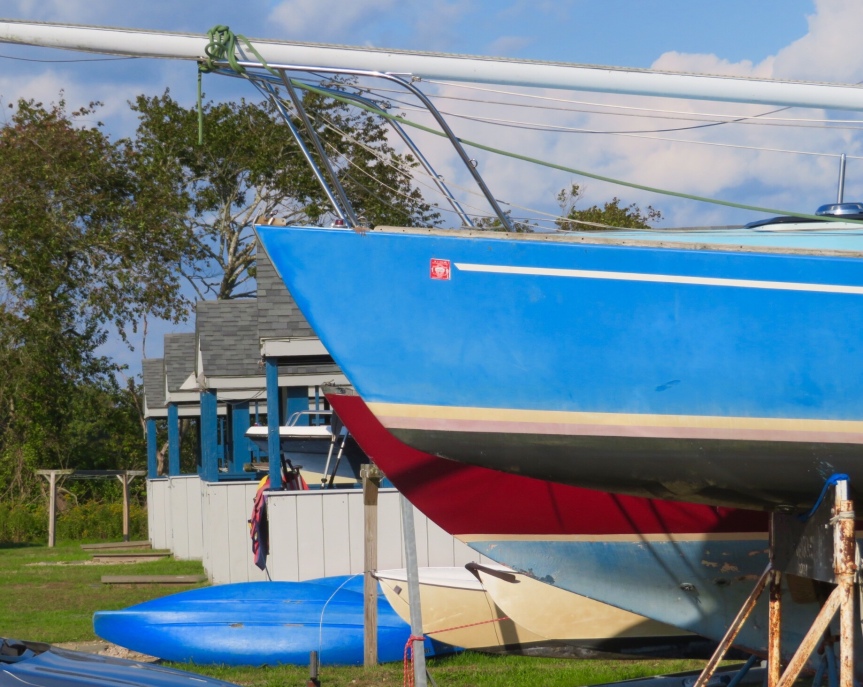 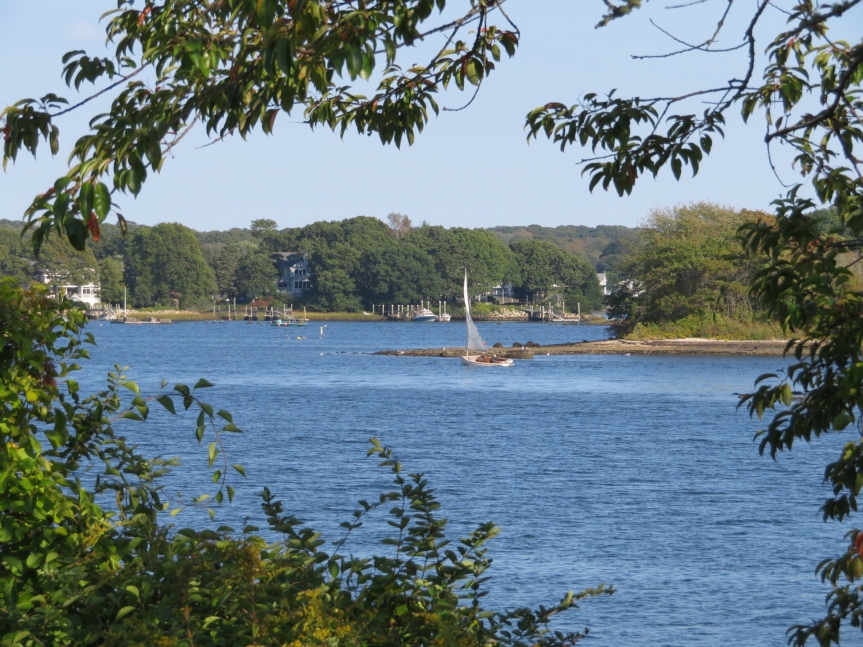 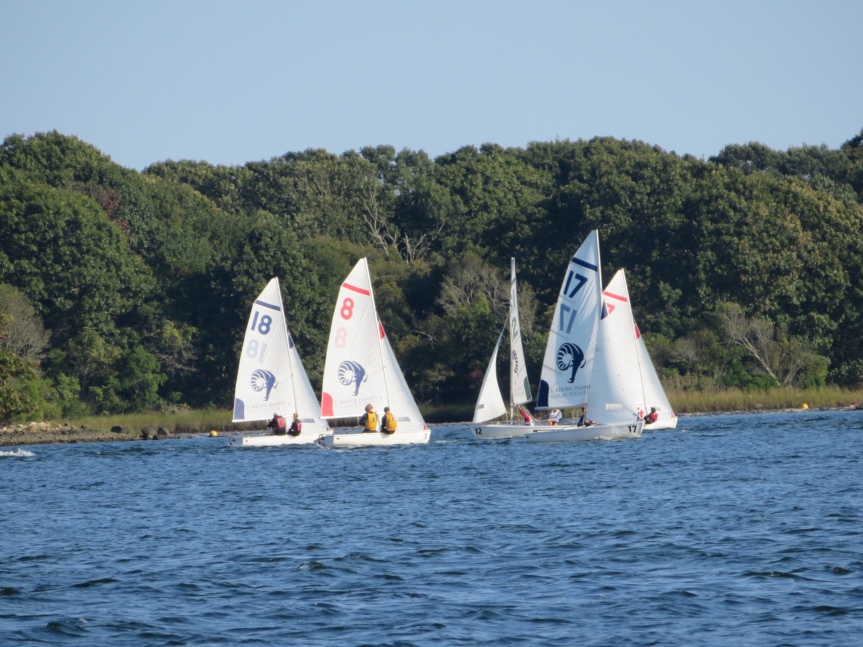 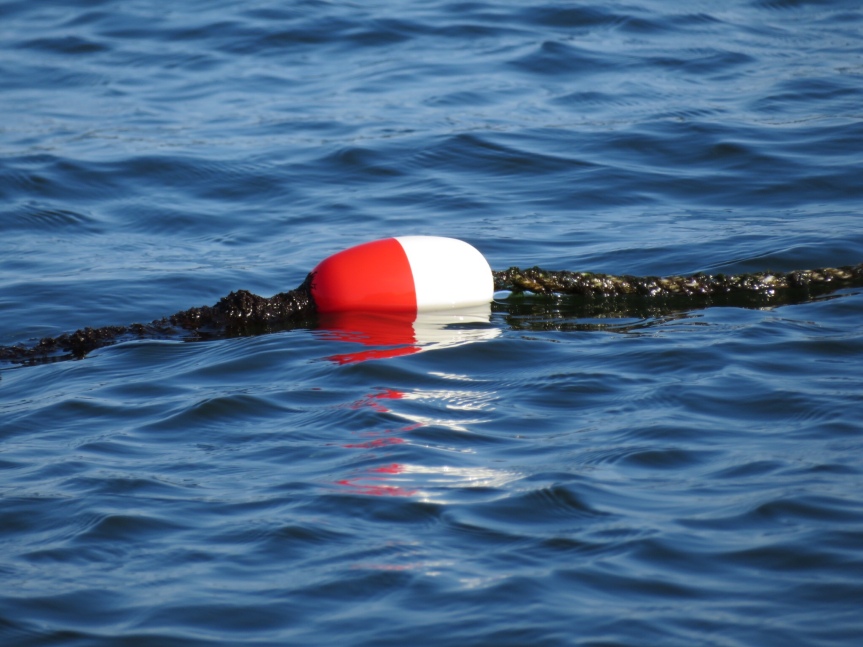 After a meatloaf meal, we congregated again for another lecture series with our two west coast orators. Having spent such a short time in Rhode Island, I was surprised at the number of people here that I know from meetings in our area and from being here last year. Finally feeling a sense of calm as I stuck around for the meditation session before retiring to the RV for the night. 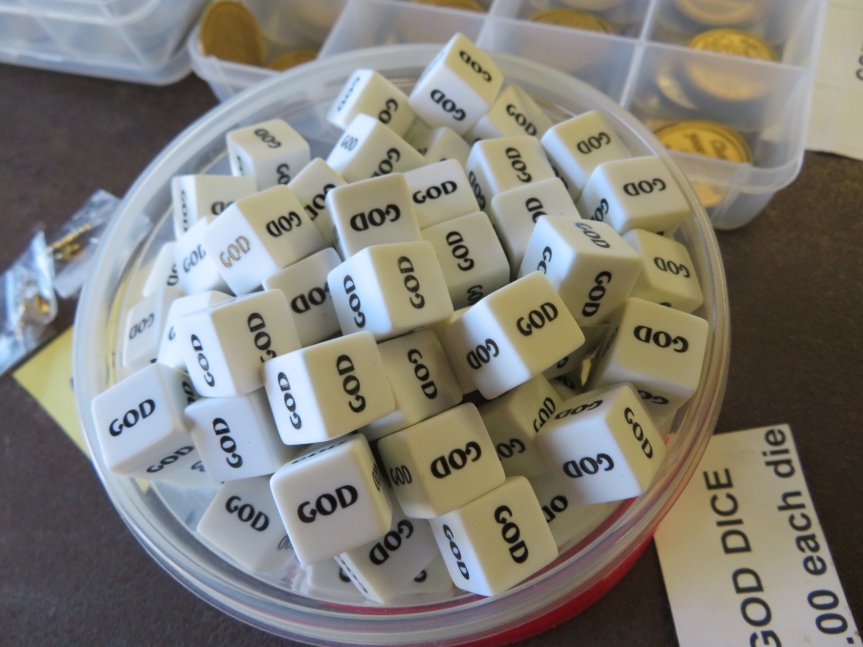 Sunday morning, everyone car pooled over to the Peacedale cemetery to gather around the grave of one of the men who had an integral part in the chain of events that led to the founding of AA. One of the group read a portion of the book explaining his role and the speakers gave their take on AA’s early development. I rode with same crew as last year – Joe, Mike and one of Mike’s buddies. Thanks for the lift and the weekend of fellowship. Back at Camp Fuller, we had a final talk before breaking up and heading home. A good respite, hanging with people on a like minded spiritual path and getting recharged for the coming week. 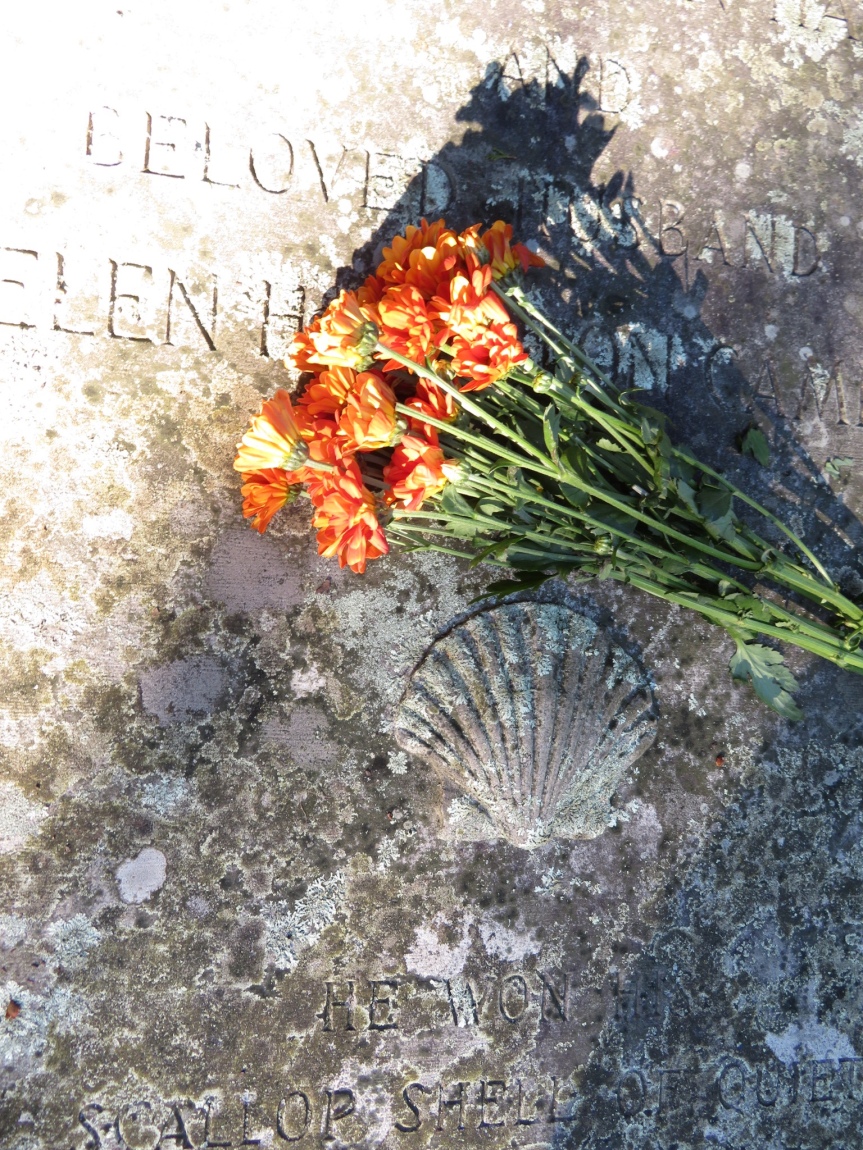 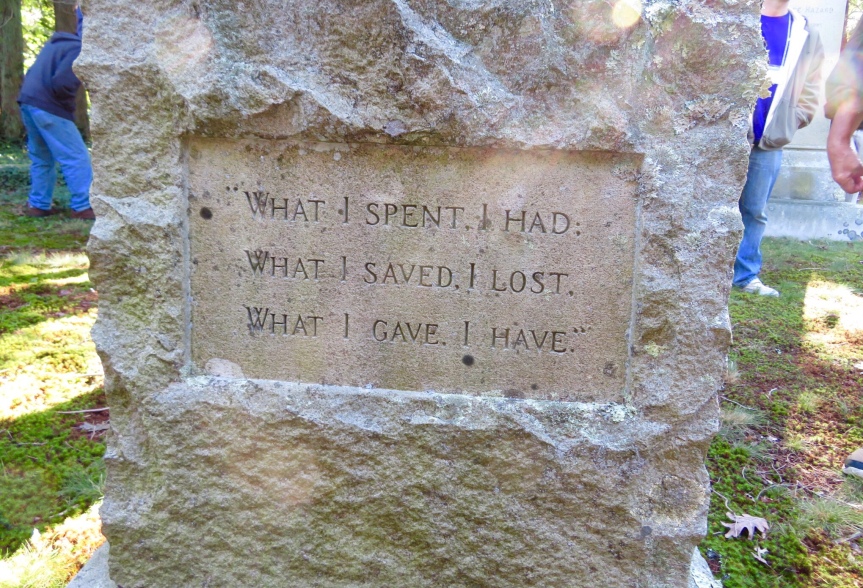 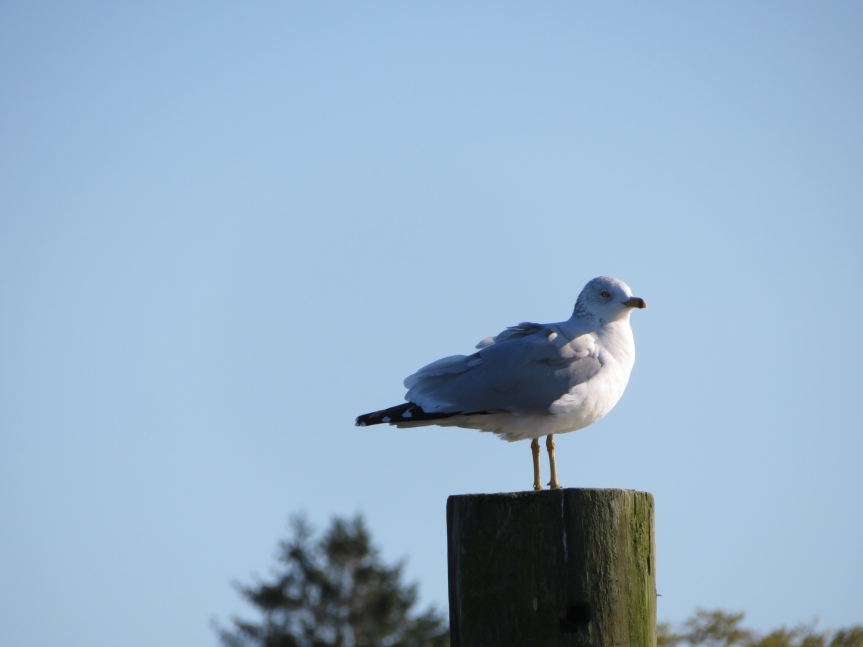