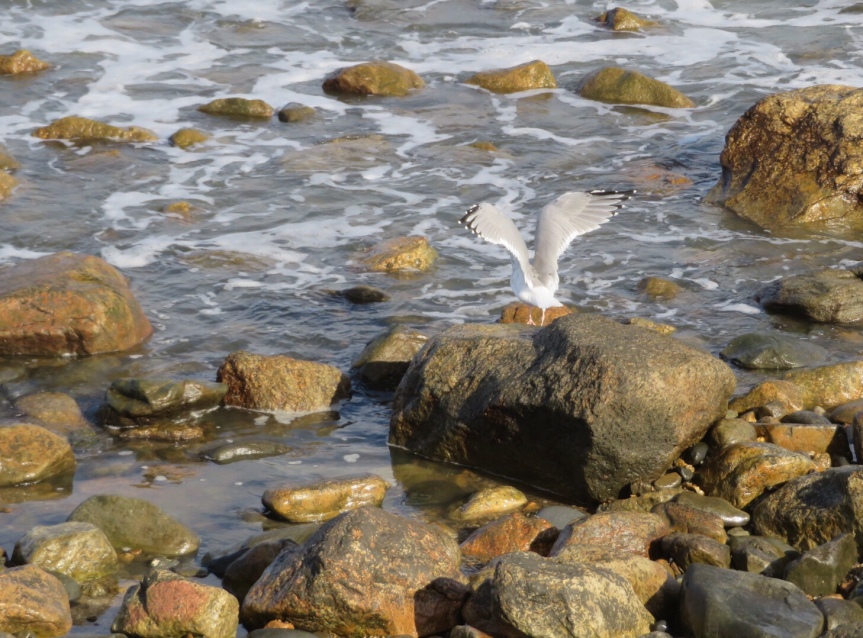 The landscape was gray and soggy as we emerged from the RV for Cali’s morning walk. The rain was over for the moment and the sun was beginning to sneak out from behind the rapidly moving clouds. Half of our front lawn area was underwater with little pools forming around the small trees along the entry road. The three of us took a long walk down by the water and through the nicer campsites in the lower loop. We were taking notes on which sites had the most privacy and space. On the return trip, I stopped in at the office and we upgraded to a full hookup spot down in loop 1. A nice dry site with pavement to park on to keep from tracking in mud and sand. The other benefit is that we can now take showers as often as we like since we can drain our water right here at the campsite. We got the rig all connected up then made a bite of lunch. 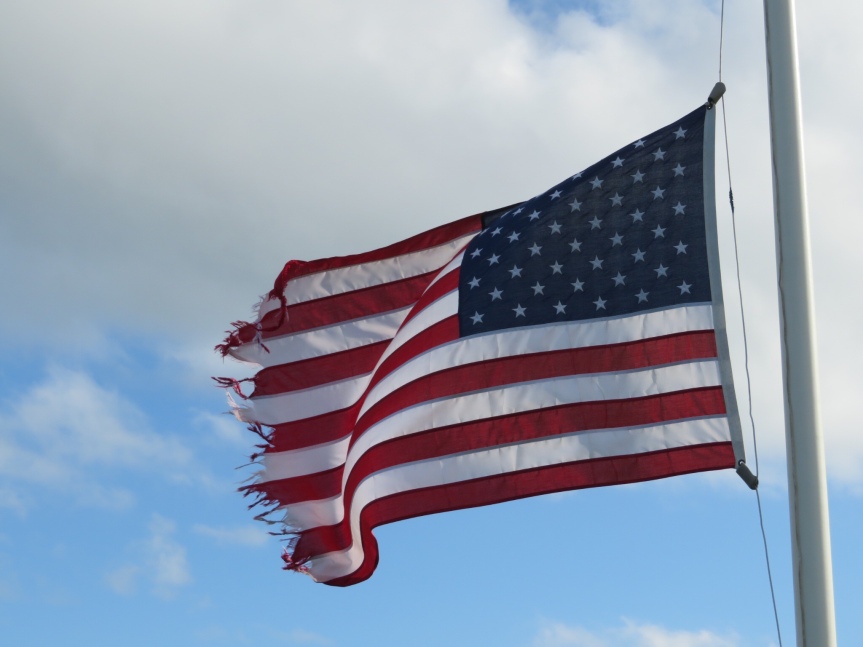 With the hard work done for the day, we decided to take a drive and check out the surf breaking in front of the lighthouse at Point Judith. The sun had made an appearance and so had a large number of people looking to take advantage of the beautiful fall afternoon. We parked at the lighthouse and walked along the grassy area in front of the car park. A number of surfers were braving the chilly waters to catch some decent sized rights that were wrapping around the eastern tip of the point. Fifty degree air and water not much warmer. Hoods, booties and gloves were the uniform of the day. 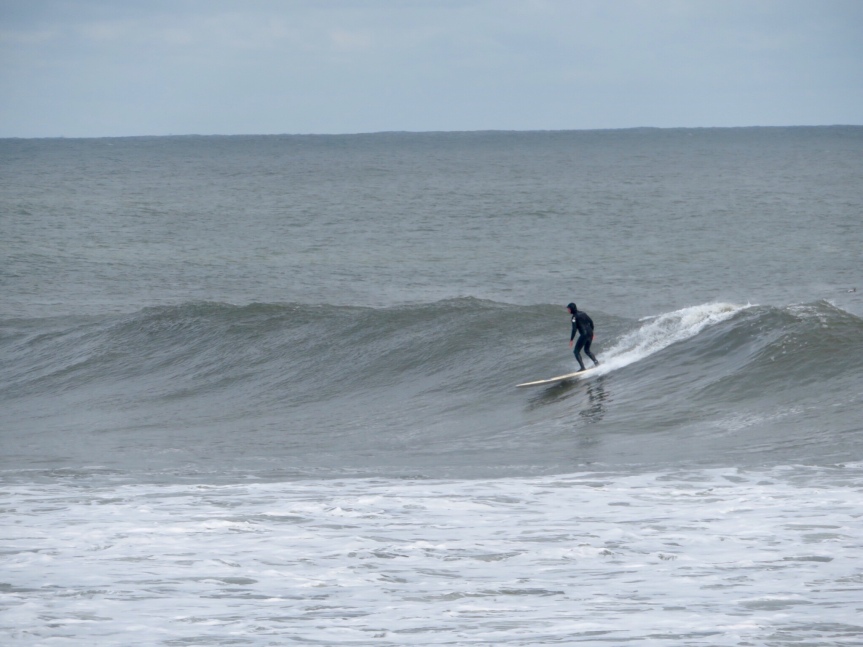 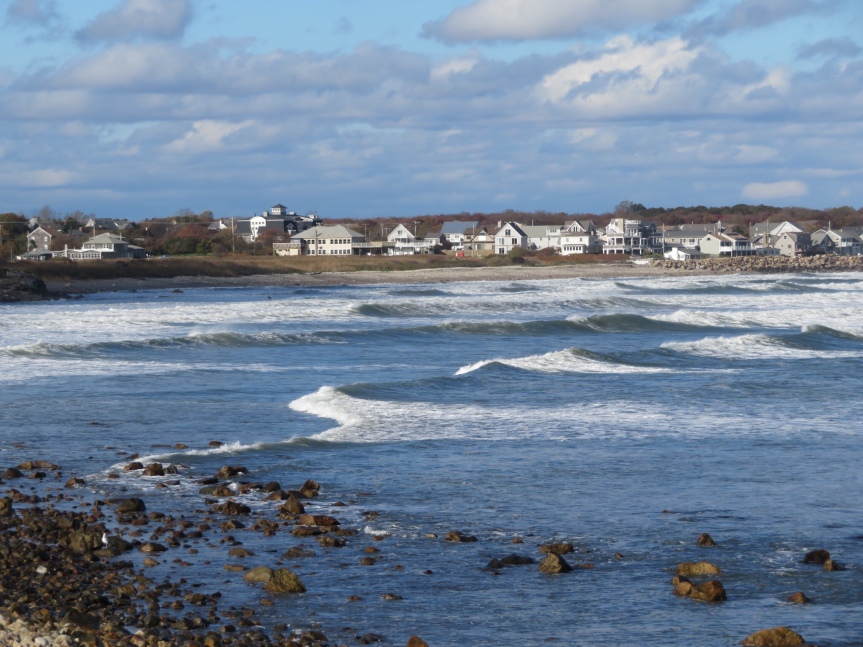 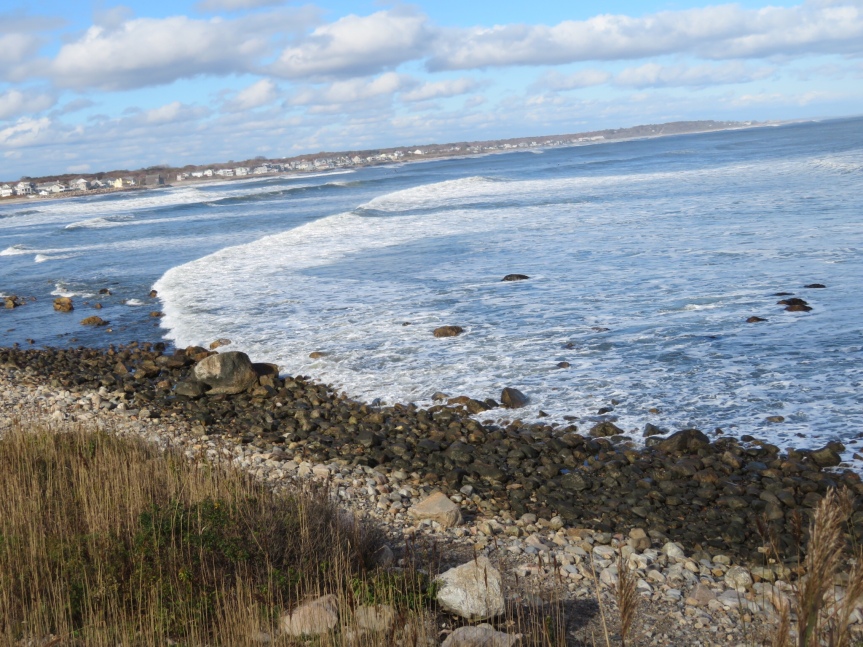 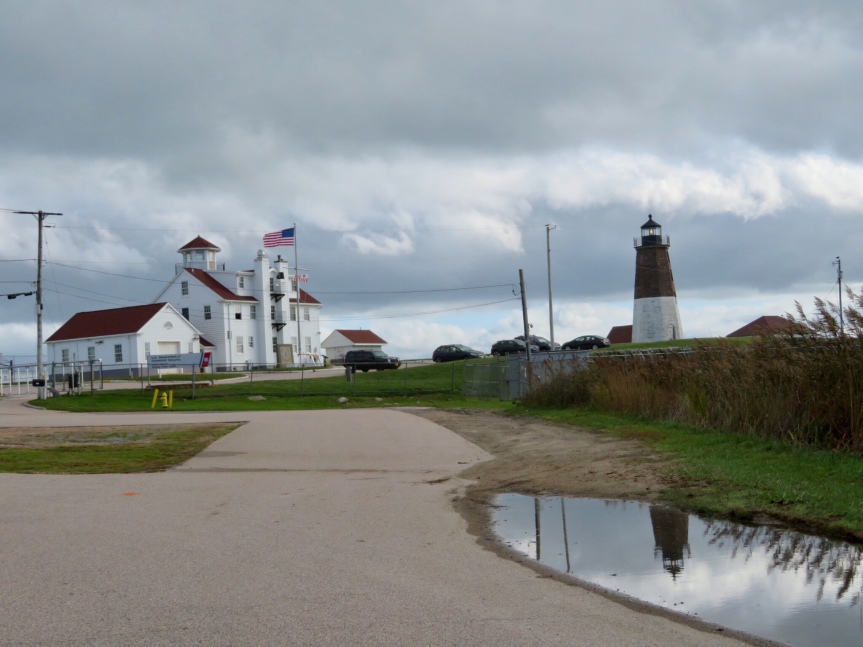 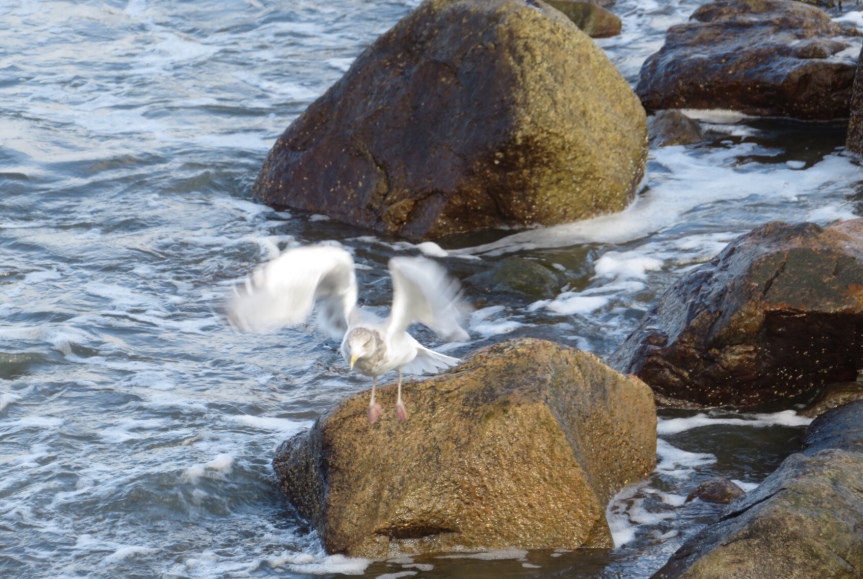 The view down the beach was picturesque with the rocky shoreline, shimmering waves and rows of typical New England style cottages lining the shore. Seabirds were plying the rich Atlantic waters, foraging along the lines of floating seaweed just beyond the breakers. A woman was walking a pair of cocker spaniels near the trail down to the rocks. They were clearly excited to have escaped being rained in for the past 24 hours at the house. We drove a short distance to a side street where large numbers of surfers were parked so that they could catch some of the easier rollers further into the center of the bay. This zone hosted a number of beginners and stand up paddlers chasing the gentler waves in the cove. 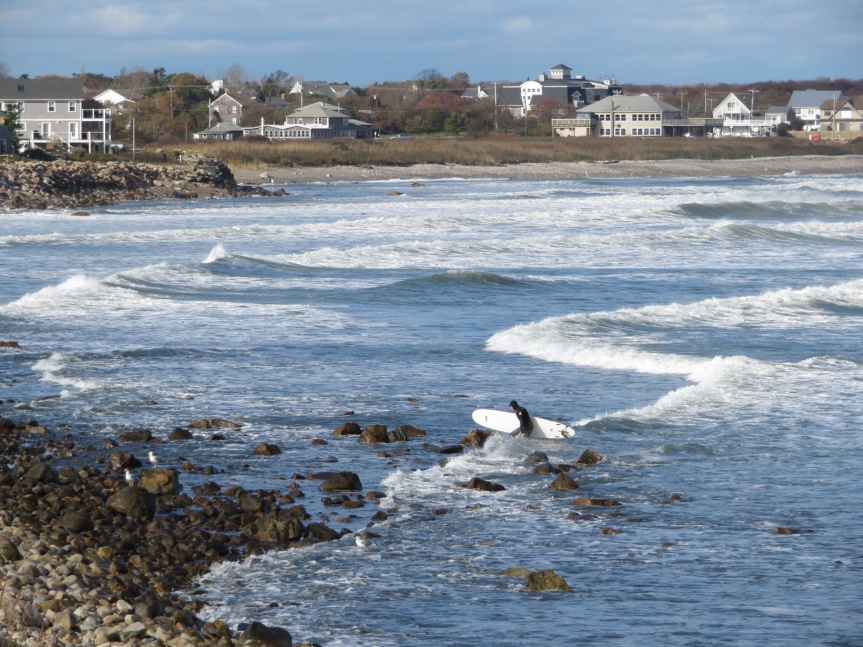 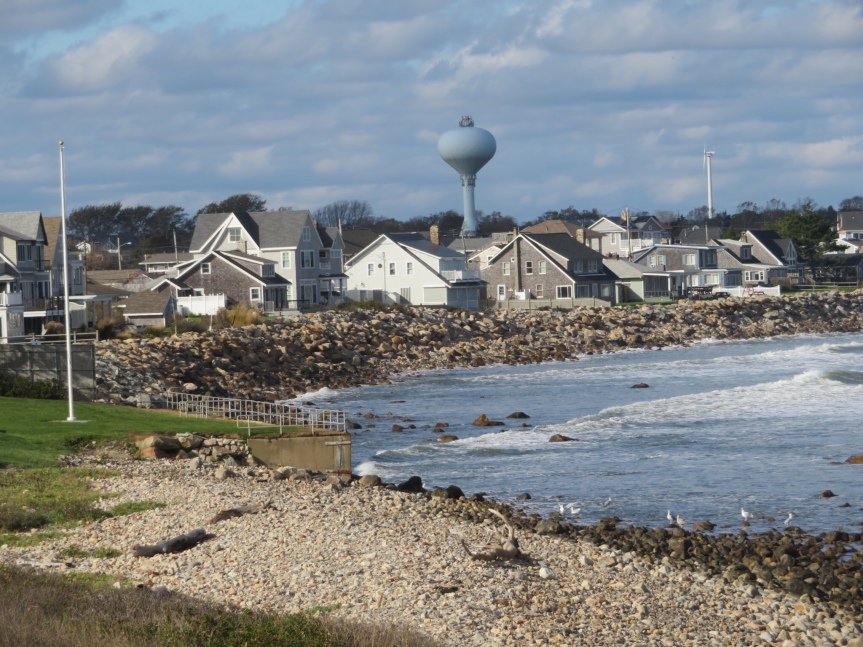 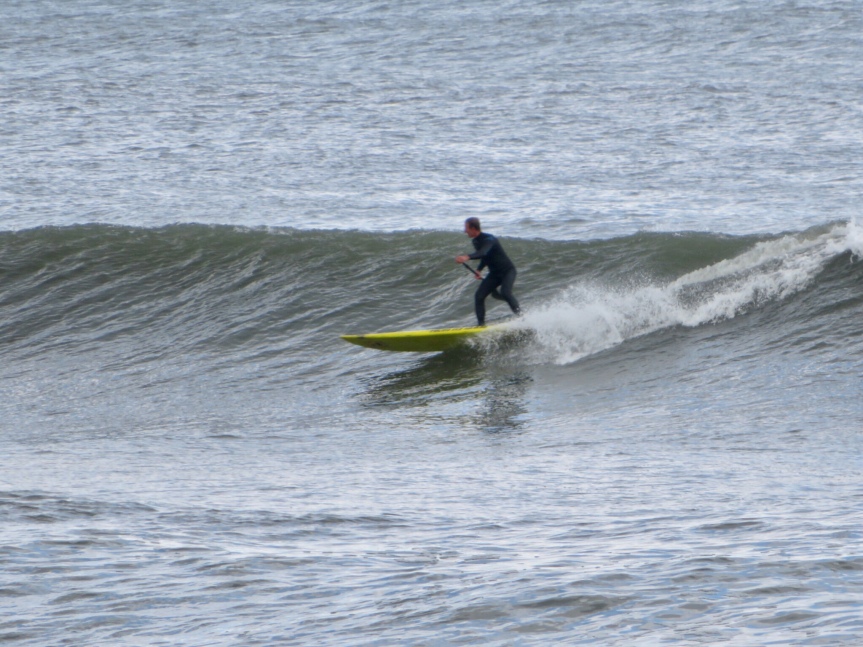 The next stop on our beach tour was the pavilion at Scarborough State Beach. Packed to the gills during the summer months, there was plenty of room in the sparsely populated parking lot today. We went for a long walk along the wide sandy beach. Flocks of rapidly running sandpipers were zipping along the waterline drilling down for whatever delicious delicacies they were finding beneath the sand. We continued on towards the ruins that sit on the piece of land that juts out from the end of the beach. 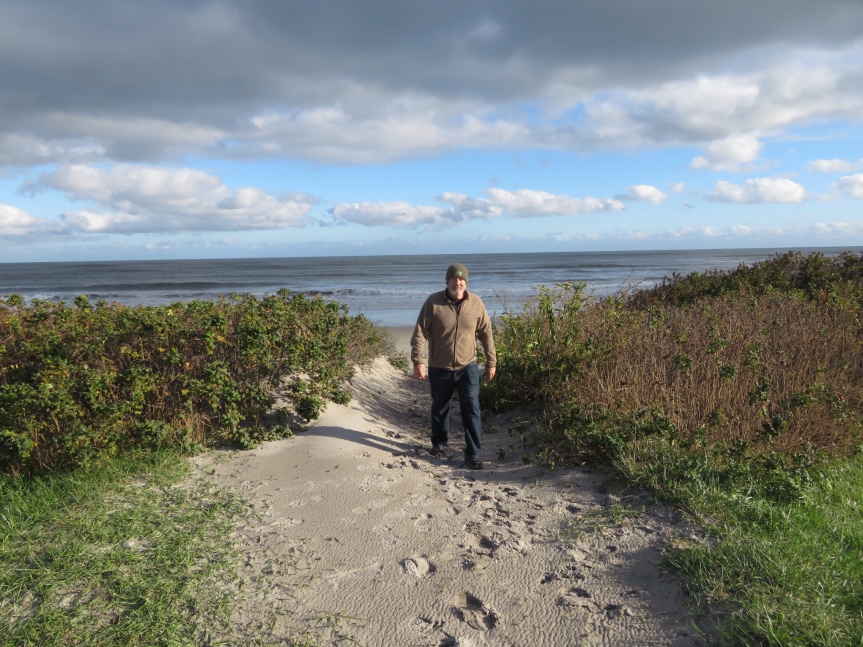 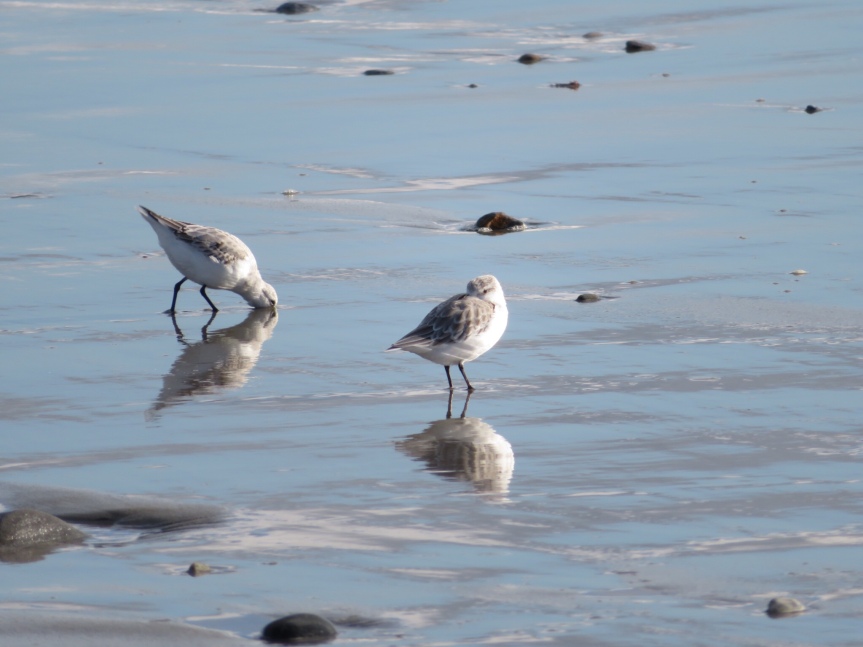 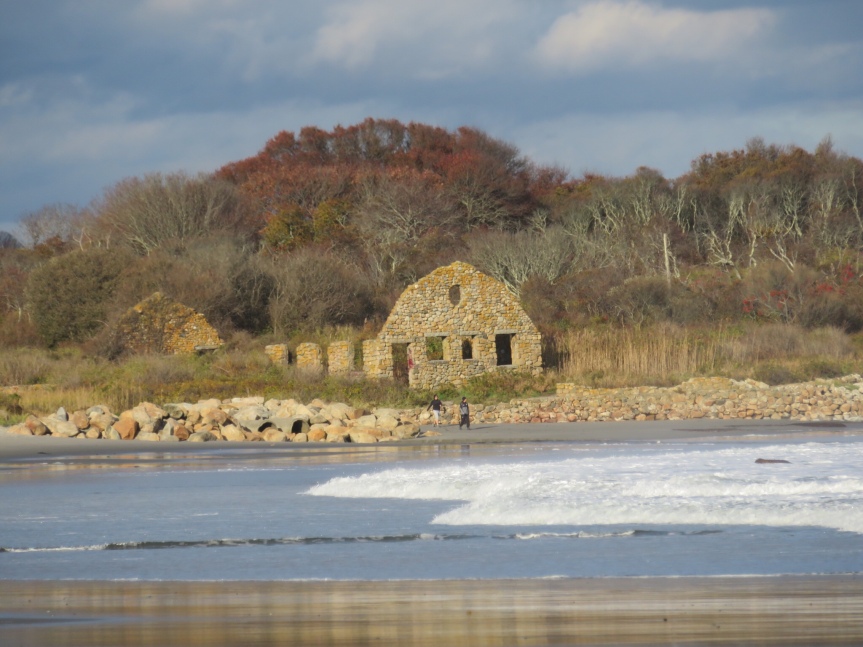 Several treasure hunters with their electronic metal detectors were traversing the beach waving their wands in the hope of uncovering a lost trinket or some other misplaced riches. Two teenage boys were racing each other up the ramp that winds around the lookout area to see who would be first to see the view from the top. As the clouds closed in over head, the temperature dropped sharply. We hurried back following the path along the lawn area where the white puffs of blooming dandelions dotted the grass. 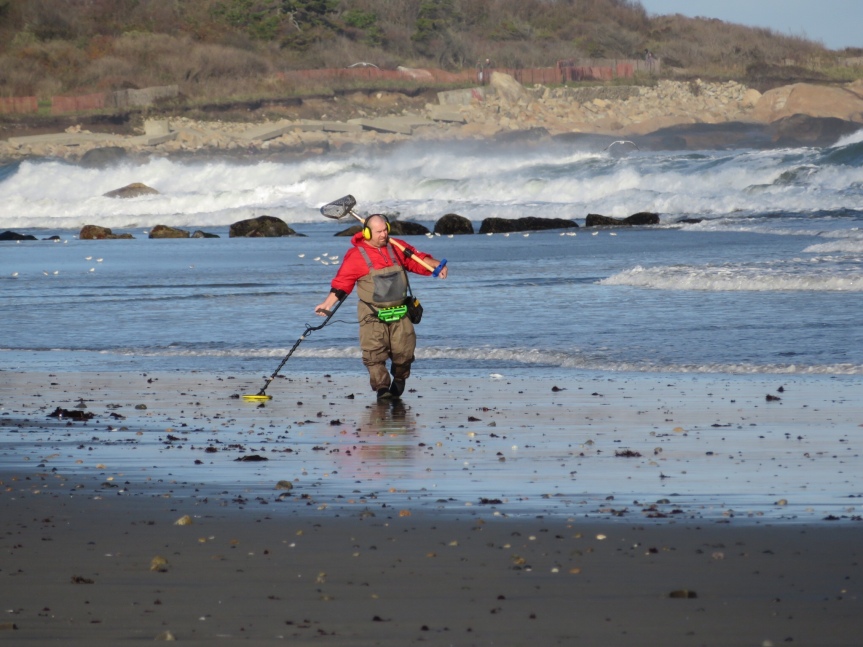 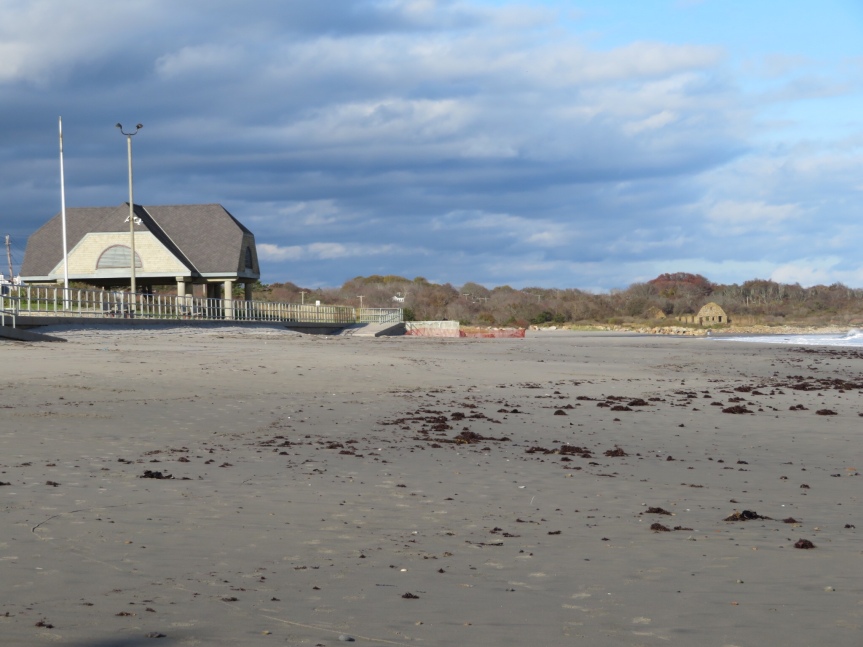 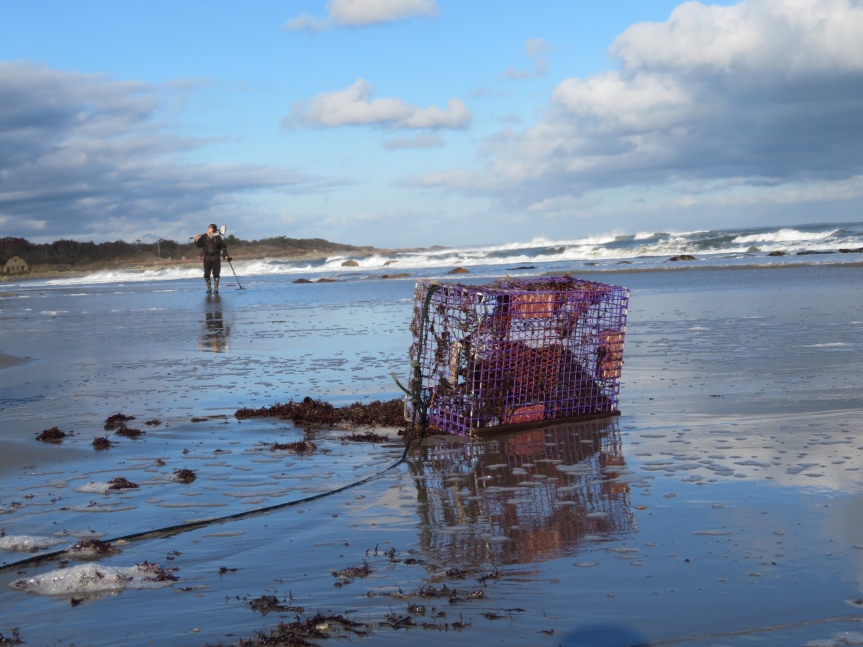 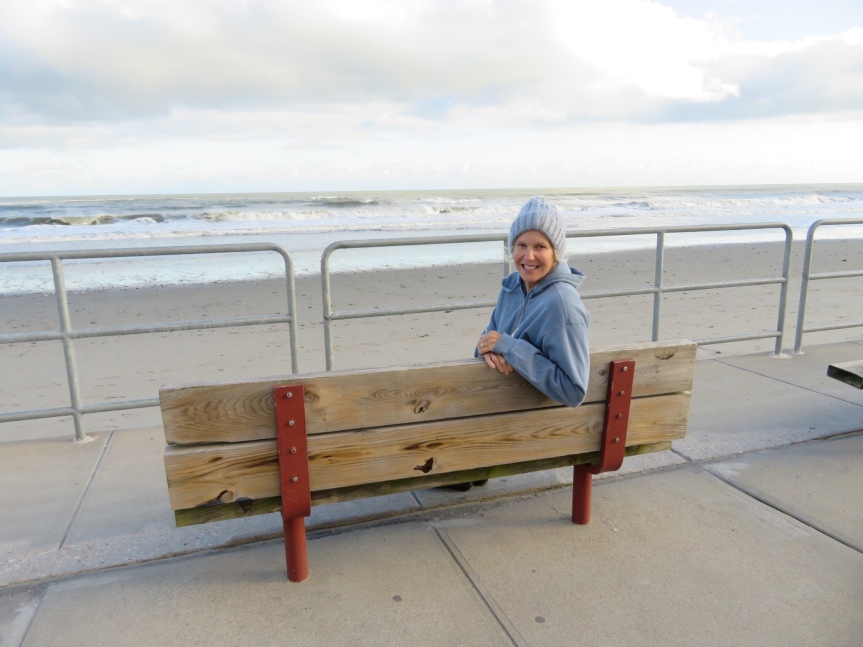 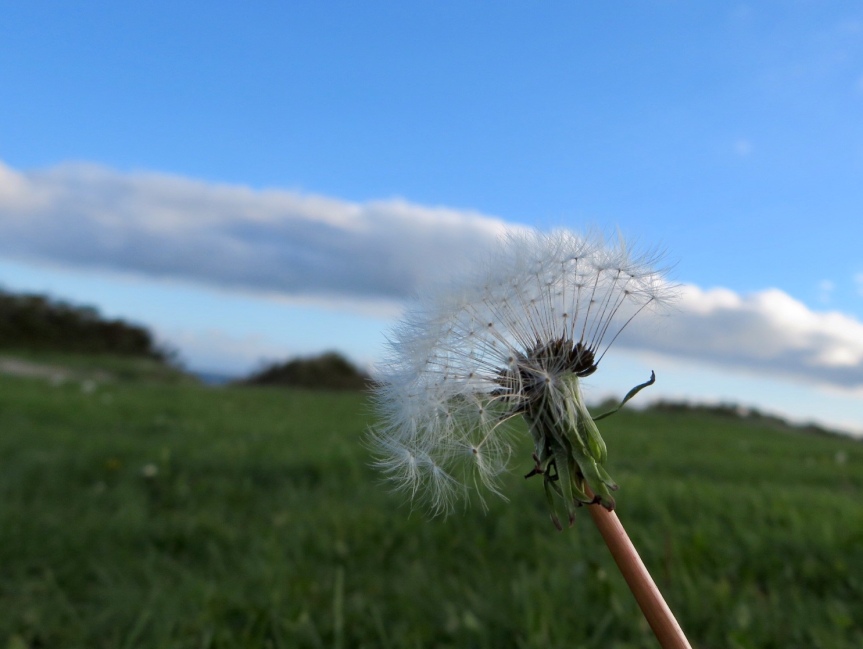 From Scarborough, we made our way over to the grocery store for a couple of gallons of water and a few needed supplies. Colvitto’s Pizza and Bakery next door makes a killer calzone, so we couldn’t leave without ordering an Italian sandwich and a few of their signature calzones to go. We hurried back to camp to set Cali free and to sit down to a hearty dinner. Watched a little Game of Thrones then listened to the Red Sox win the World Series. Pretty good day all around here in New England. 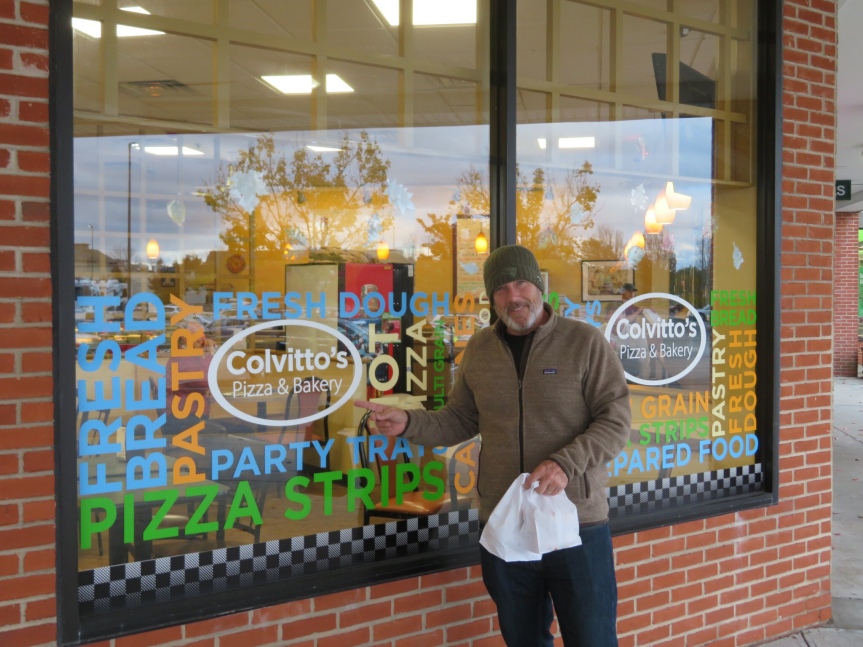 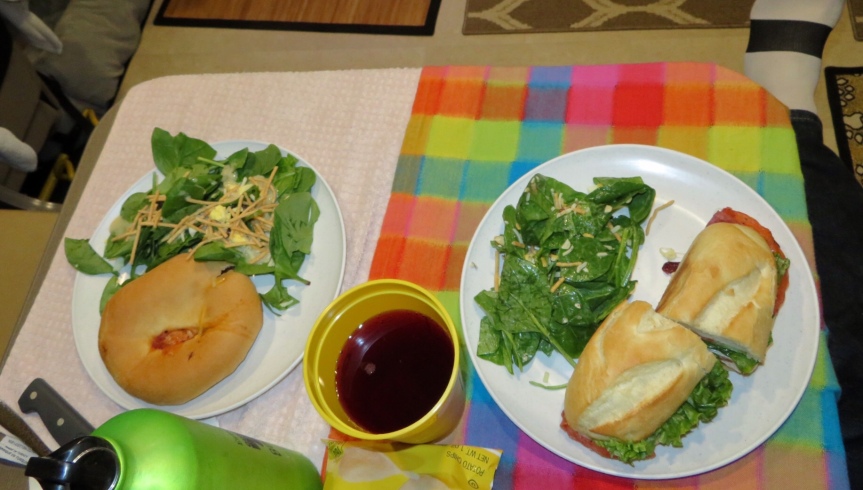 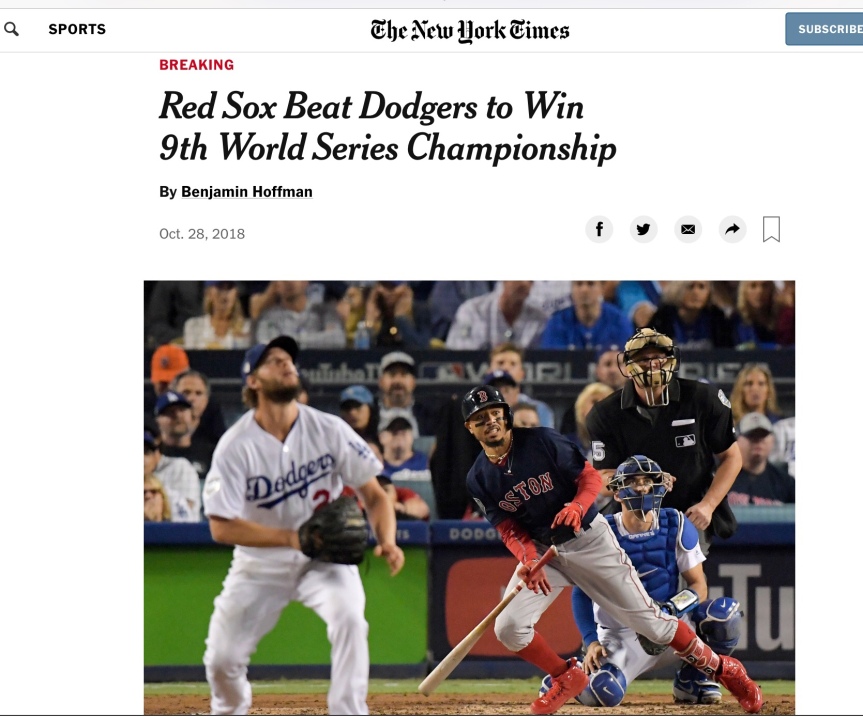