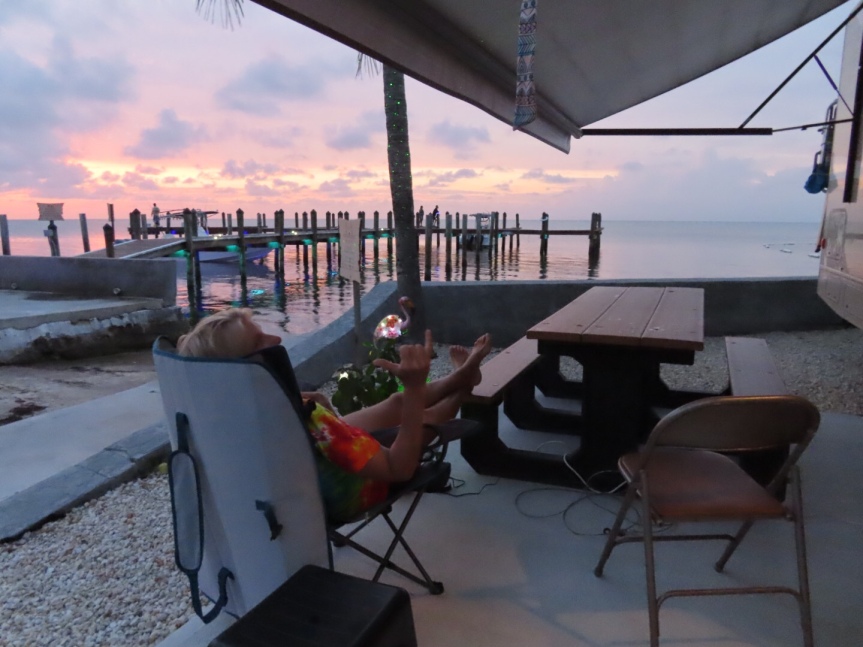 I was excited to get going this morning but there was still a lot to do. The camera I soaked in the pool yesterday was a goner and we didn’t want to head off to the Keys without a water camera so I was waiting outside the doors of Best Buy at opening time to buy a replacement. I bought the same model just a version newer. Fuji’s app sucks but the camera is decent and I already have accessories that will work with the new one. Then it was a quick stop at Home Depot for a piece of cable and next Publix for a major grocery shop before hitting the road. PJ had things pretty much in order when I got back and we were loaded up and out of the campground a little past noon.

We wove our way through the back lanes of the Redland agricultural area until we ended up in Homestead. Traffic slowed things down getting through the city but we were soon on the narrow road leading out to the Keys. The towns with familiar names rolled past the windscreen – Key Largo, Islamorada, and Little Conch Key. Around 3:00 o’clock we made the sharp right hand turn into the Jolly Roger RV Park. 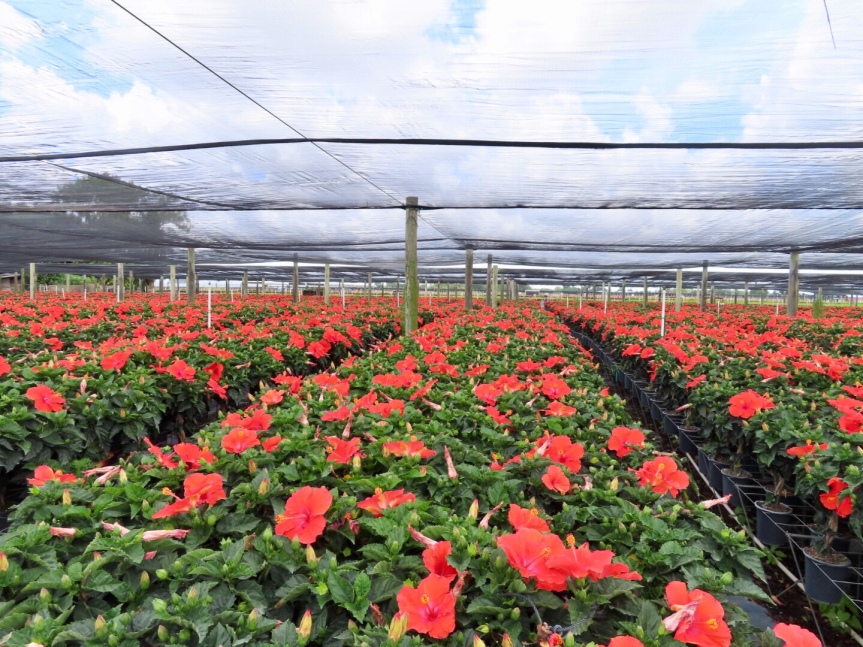 Debbie in the office set us up with a waterfront campsite right on the boat ramp. We got settled in then surveyed our surroundings. Crystal clear green waters with a roped off swimming area to the right with boat docks and a shaded picnic area to the left. As soon as Cali was walked and the rig was leveled up, we jumped into the water and swam around our little cove to see what creatures we might be able to spot. Tons of lobsters! They can’t be harvested here and they seem to know it. They are poking out from under every rock and block along the shore. There were some cool reef fish, puffers and rock crabs also. We slowly kicked around the shoals grabbing and poking each other every time we saw some exciting thing. 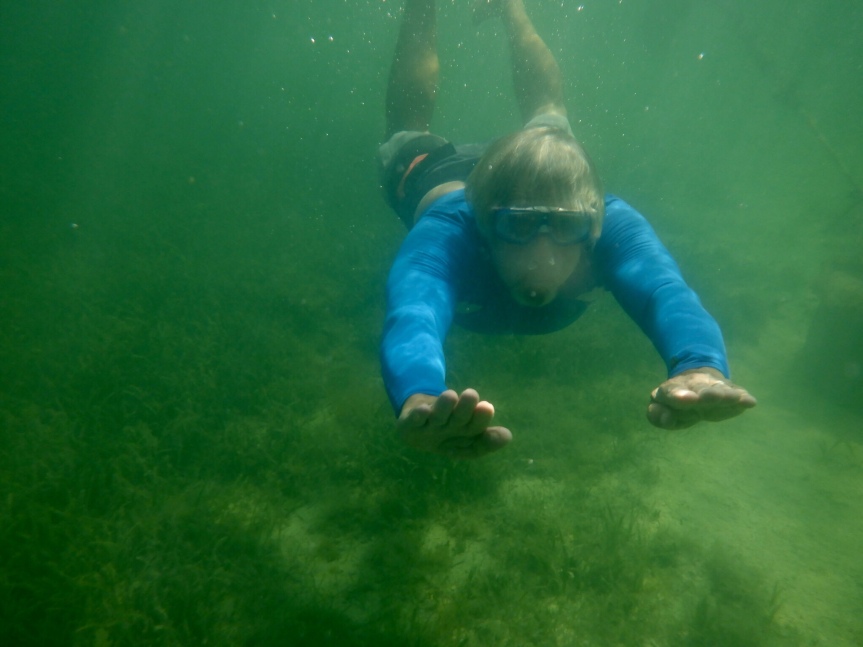 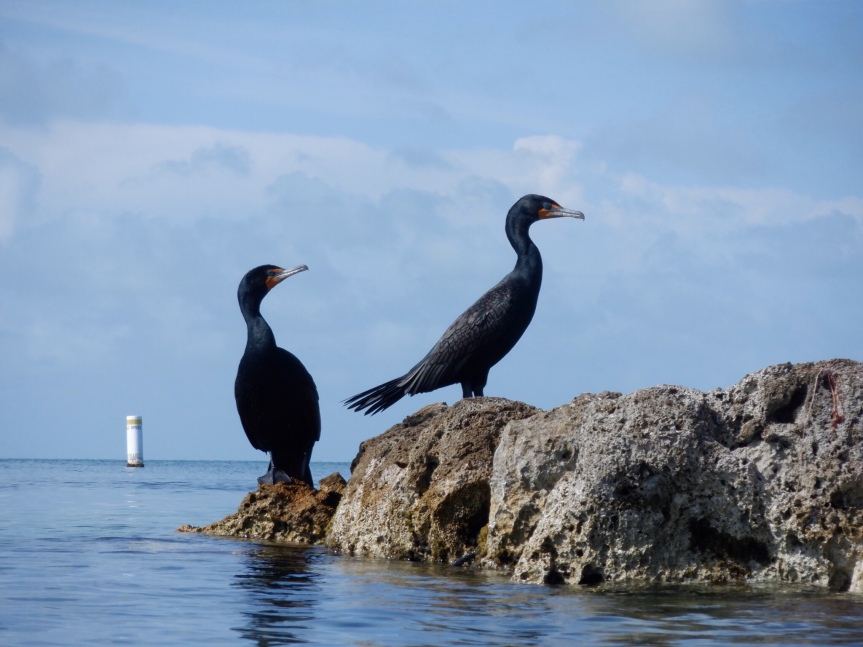 When we’d seen enough, we got out, drank a cold seltzer drink then launched the paddle boards out into the bay. We paddled about a half mile south to the dolphin training facility, kind of like a dolphin gulag. Over the rock jetty out front we able to peek into the compound and see a few of the captives swimming back and forth. Big signs warned to keep our distance but PJ’s a rebel and stroked right up to the rocks to have a look. 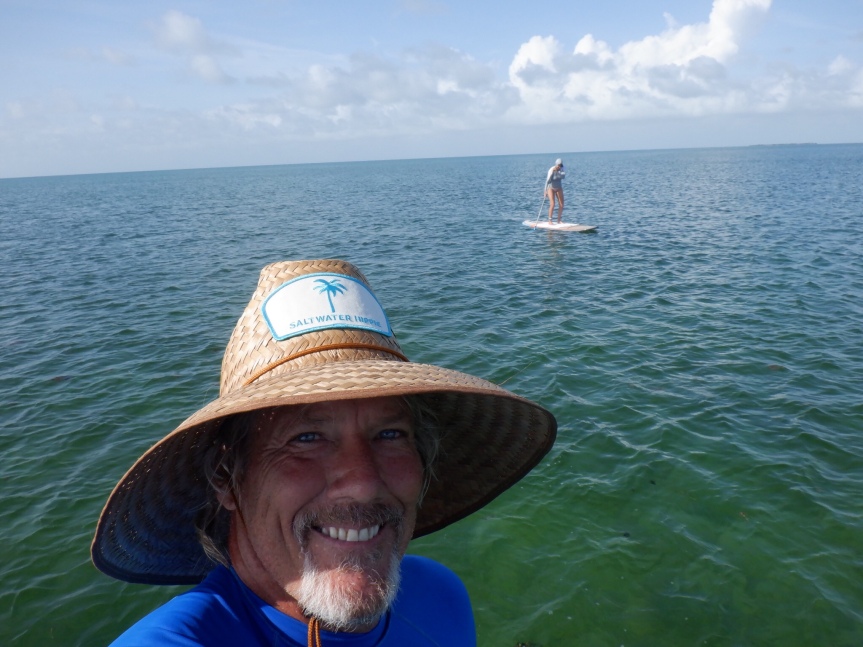 We paddled out farther and returned to the north passing our campsite and exploring a small cove that went in among the mangroves on the other end of Grassy Key. We returned to camp and rested up and talked to people passing by. It is definitely a social scene here and we are embracing meeting people and seeing what they are about. As I was drying off, I went ahead and applied the rail saver tape to the new board to keep us from dinging it up too much when we inadvertently hit it with the paddle. I got that on so it looked okay, attached a paddle holder and then threaded a piece of stainless steel cable through the leash plug to allow us to lock the board to something unmovable when we are not around.

By then I was pretty beat from a long active day so we sat on the porch and watched the sunset. A group of RVers that came together from central Florida were having a potluck under the big palapa and others migrated down from throughout the campground, cocktails in hand, to walk out on the dock and witness the golden rays of the sun sinking into the turquoise sea.

We ate salads and relaxed moving inside as the insects became a bit more prevalent. Later in the night, we walked out on the docks and lit up the lobsters walking around on the bottom with my high powered flashlight. A beautiful, warm evening running around in just trunks. We spent some time out over the water enjoying the mood lighting and romantic vibe. 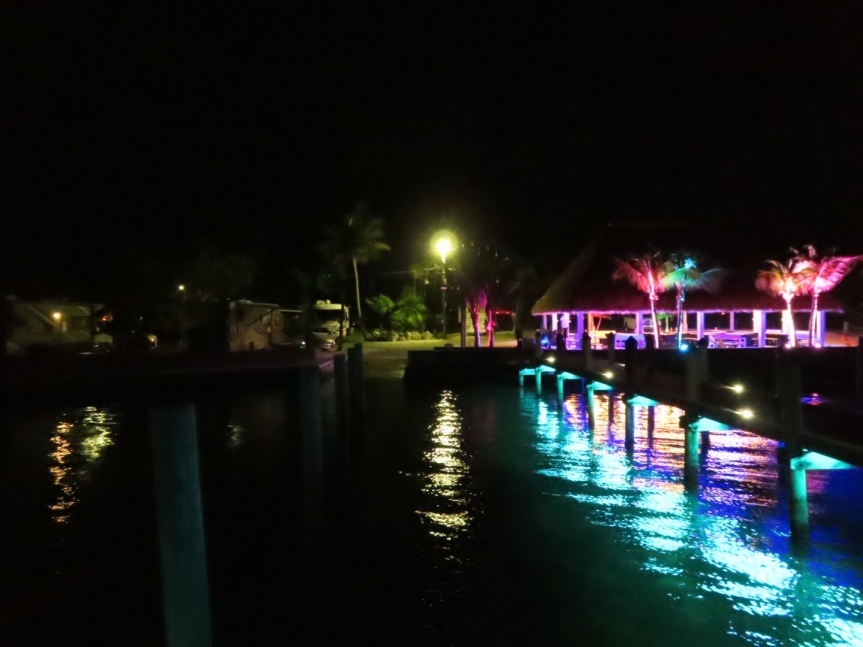