Today, we set off to explore a little around Key West. We checked the weather forecast and it called for partly cloudy skies with minimal chance of rain. We parked in a garage next to the Key West Bight Marina and dodged the gaggle of winos animatedly hooting it up outside the corner liquor store. We poked our heads into a little shell and oddities shop when out of nowhere a deluge came pouring from the sky. We took refuge on a bench under the overhang to wait out the passing downpour. There are lots of colorful characters making Key West their ultimate hang out. I think it’s kind of like Vegas, where you come for a vacation, drink up or lose all your money then make a home for yourself on the street. 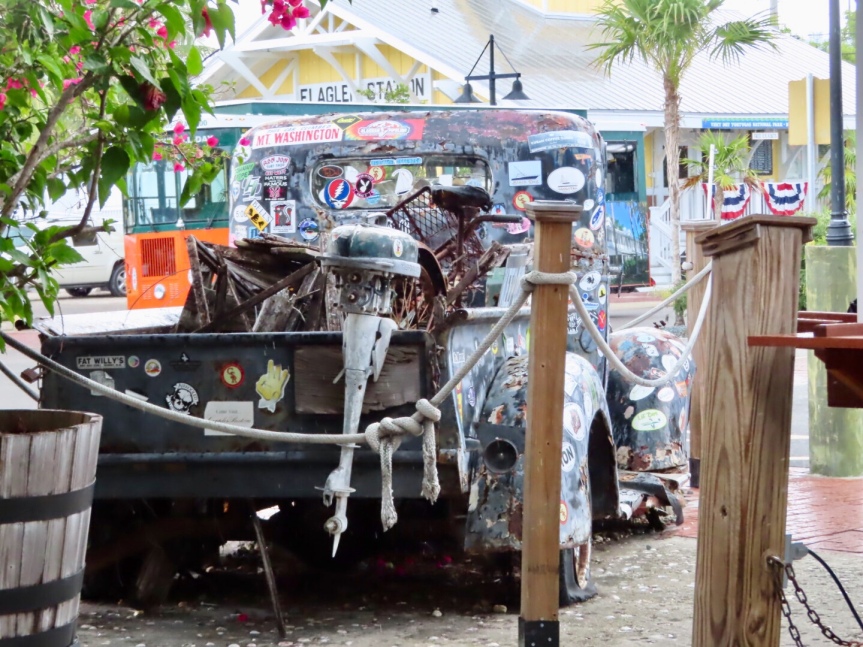 It soon became apparent that the rainstorm wasn’t just going to pass on by so after loitering around under a few no loitering signs we visited a tackle shop where they sold plastic ponchos and figured we’d continue on our tour. After all, the hourly parking meter was ticking away. There is a free bus service, the Duval Loop, and we found a stop close by and loaded on with a bunch of other tourists like a herd of cattle. I stepped on PJ’s toe and got some major stink eye. 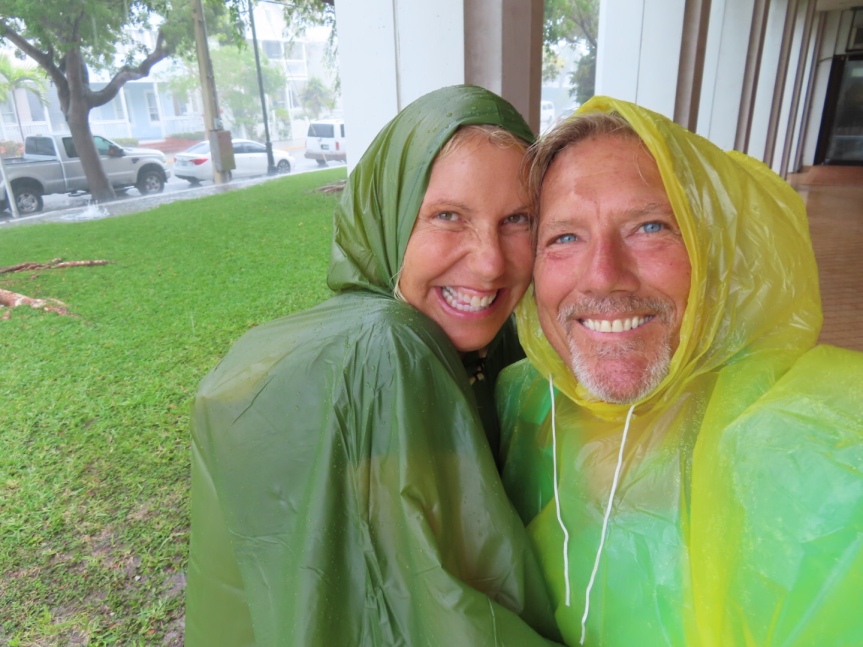 We debarked at the mile zero marker where the US1 finally hits the end of the road. The rain was coming down in buckets and we huddled beneath an entryway to a building watching it fall. Turns out we were now loitering in front of the drug court, go figure. Plastic ponchos were the haute couture of the day, yellow ones on the tour train, clear ones for local pedestrians and white ones with doggie patterns for the ultra chic. We sloshed across the street and took some soggy photos in front of the mile marker then went into the souvenir shop and dripped all over their hardwood floor. I’m soaked to the bone from the waist down by now, soggy socks, waterlogged shoes and nearly see through shorts, like a wet tee shirt contest. 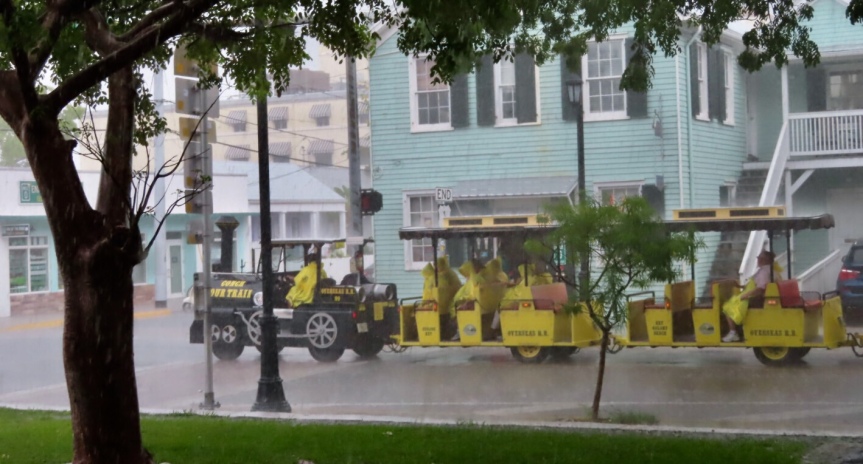 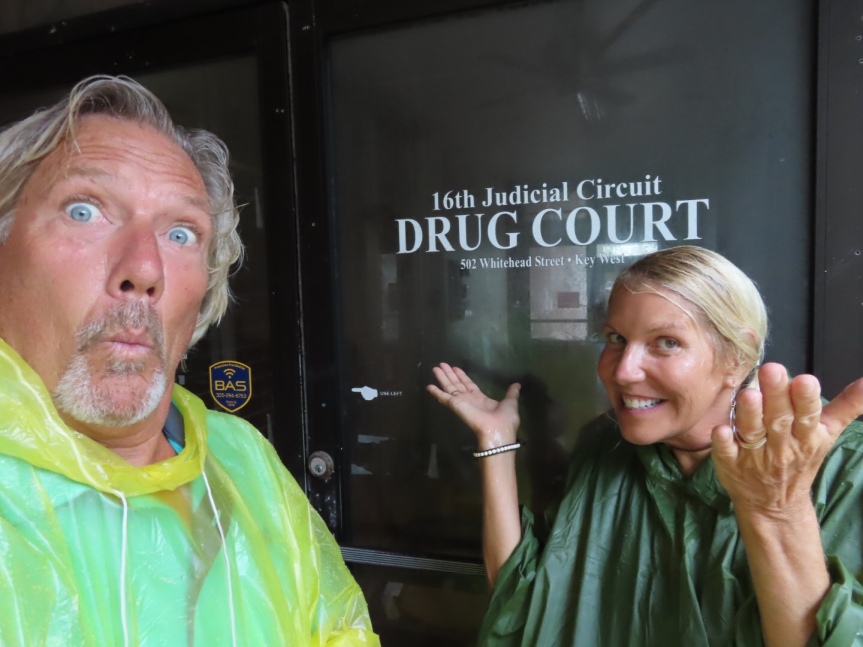 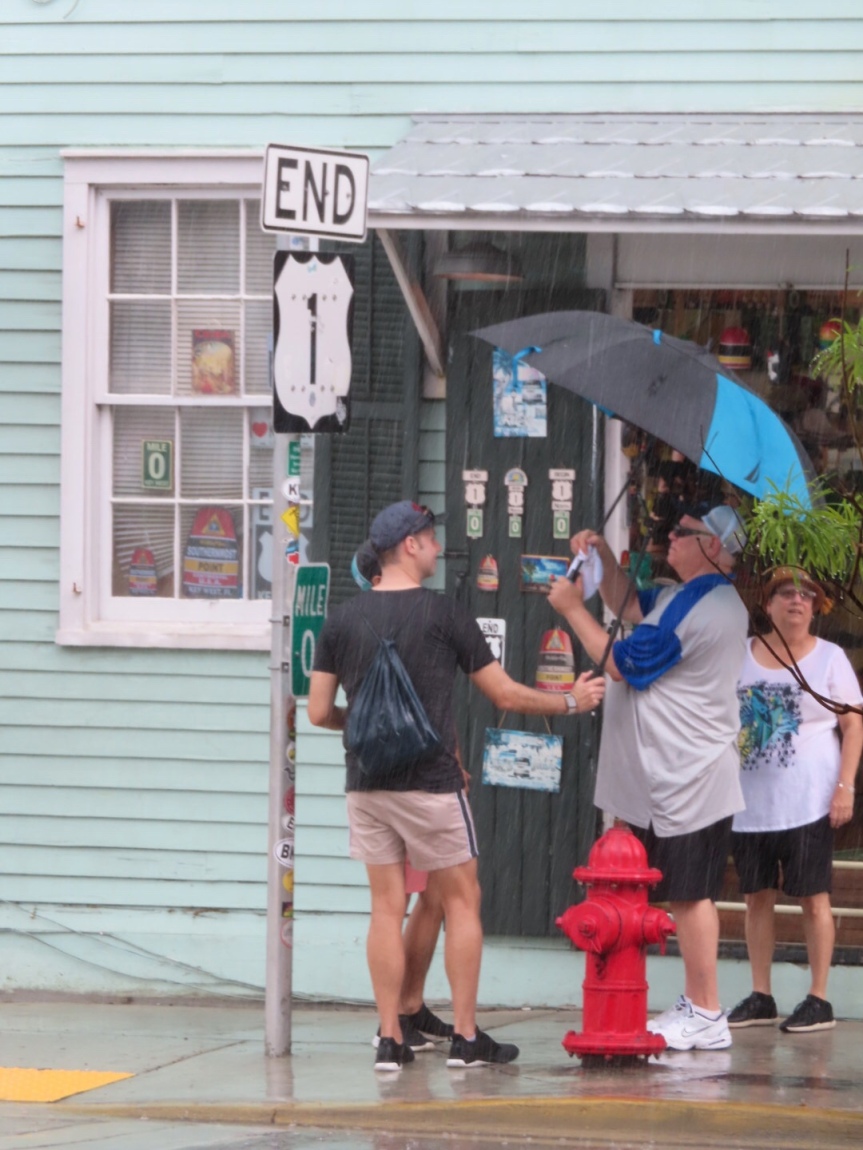 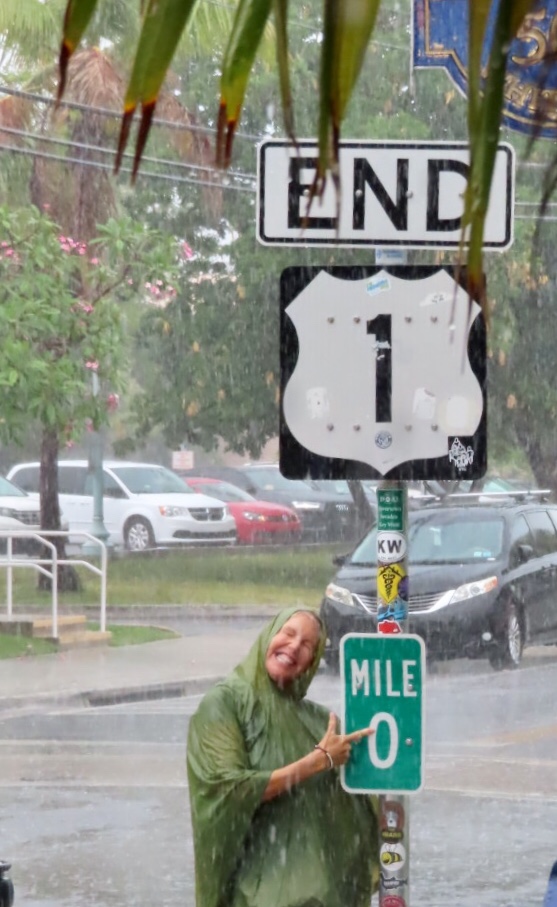 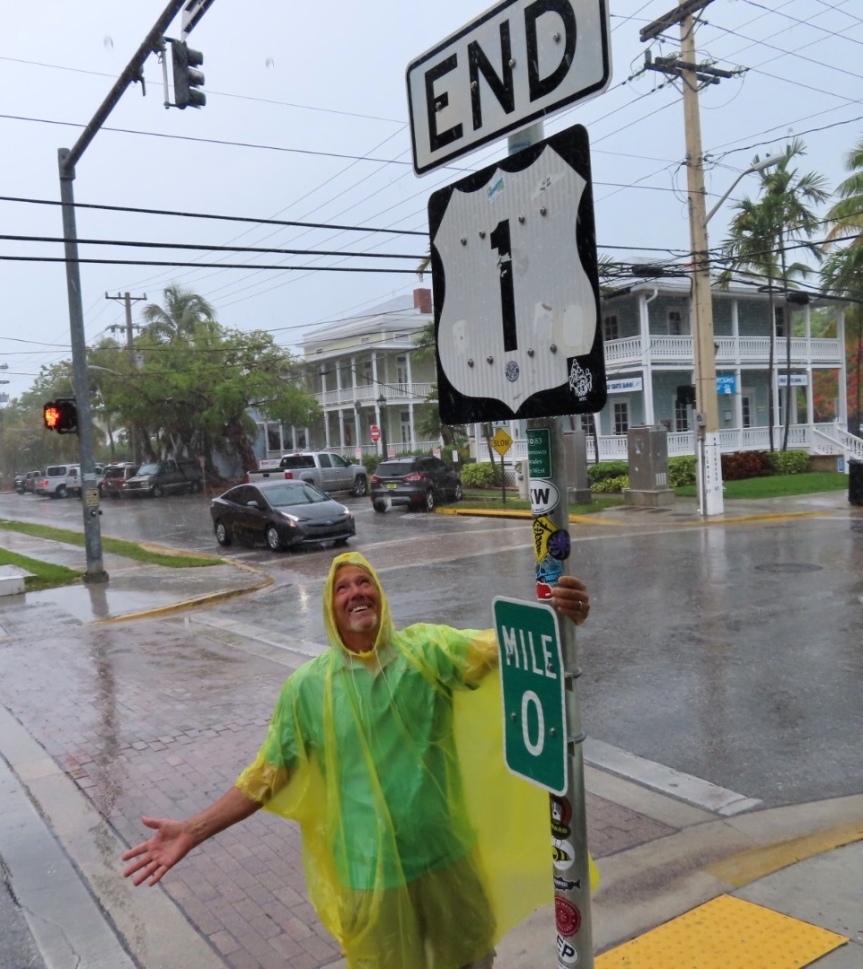 When we felt we’d deposited enough water in the little curio shop that we were no longer welcome, we braved the elements again and waited for another bus across the street. When he let us on, the bus driver took one look at us and told us not to sit down on his dry seats. He was a funny guy giving a running commentary as he toured us around a loop of an exclusive beach area. Not long after, we arrived at Ernest Hemingway’s house so we thanked him for the ride and hopped off and joined a bunch of other bedraggled tourists under the veranda in front of the house. 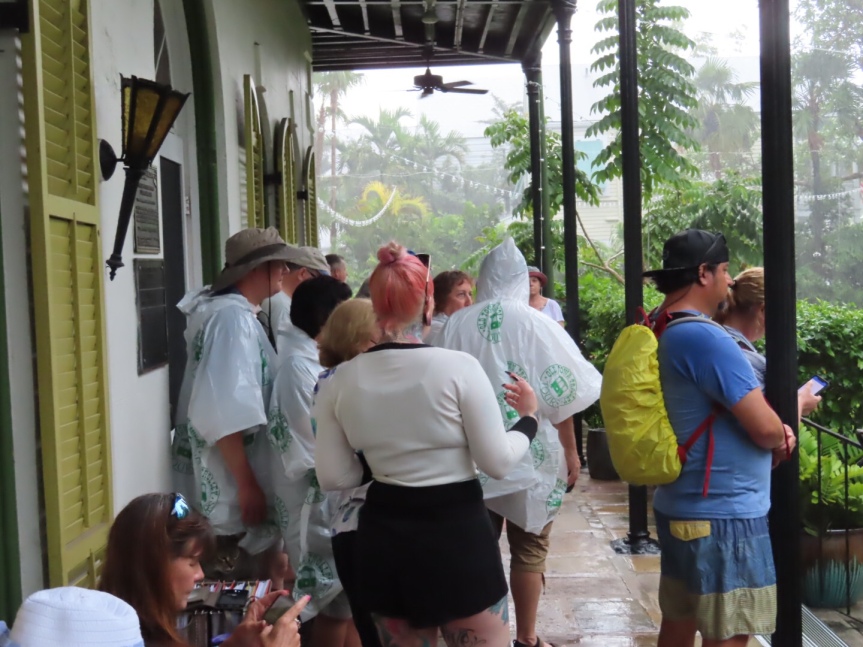 I shook myself like a dog to get all of the moisture off of my coat then we had about ten minutes to dry off before Alisa took a small group of us on a guided tour. She was gregarious and knowledgeable with tons of facts and background on Hemingway and the history of the house. I was glad we got the guided thing because it filled in a lot of questions I wouldn’t have gotten answered wandering around by myself. Plus, I was amused by all of our yellow ponchoed tour mates. Hemingway was a pretty interesting character, almost got me inspired to read a book. I’m not going to give a bunch of factoids here but, for us, the visit to the house was really cool and well worth the overpriced admission. Especially since it was dry inside. When we left, the rain had finally moved on. 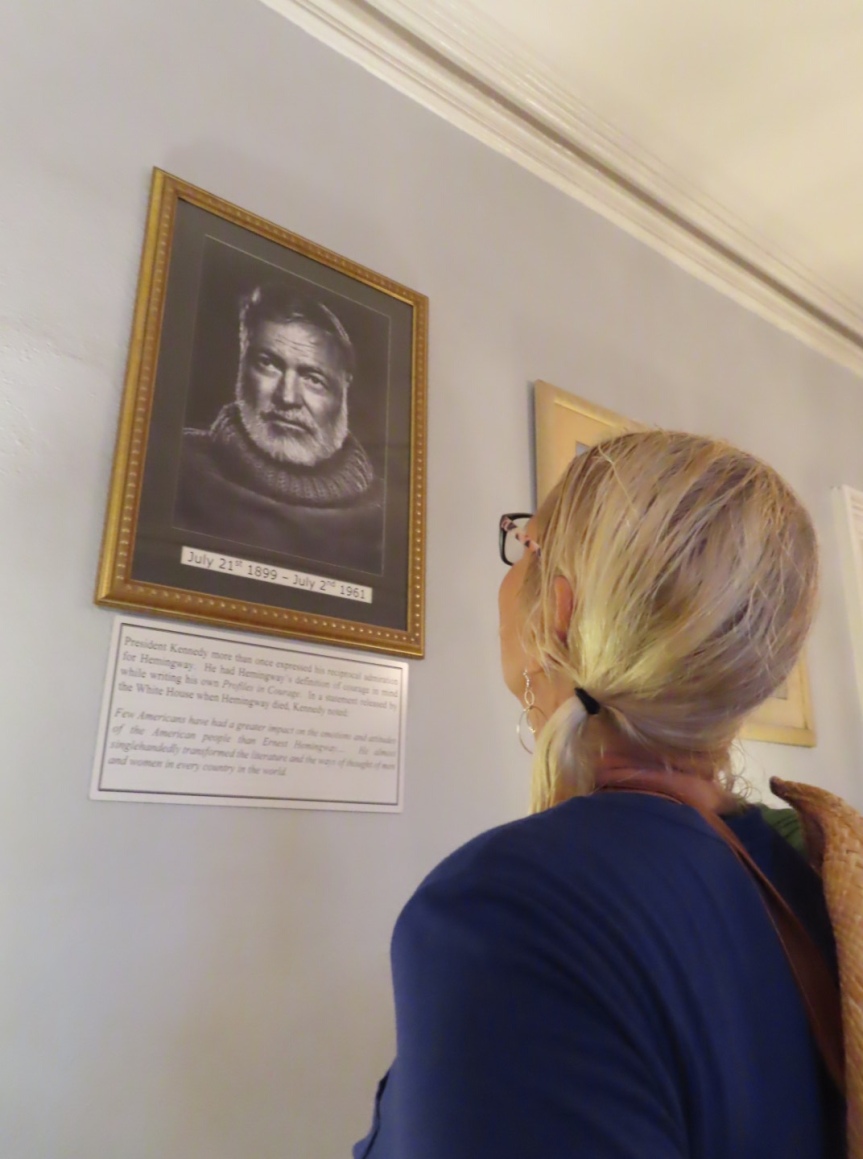 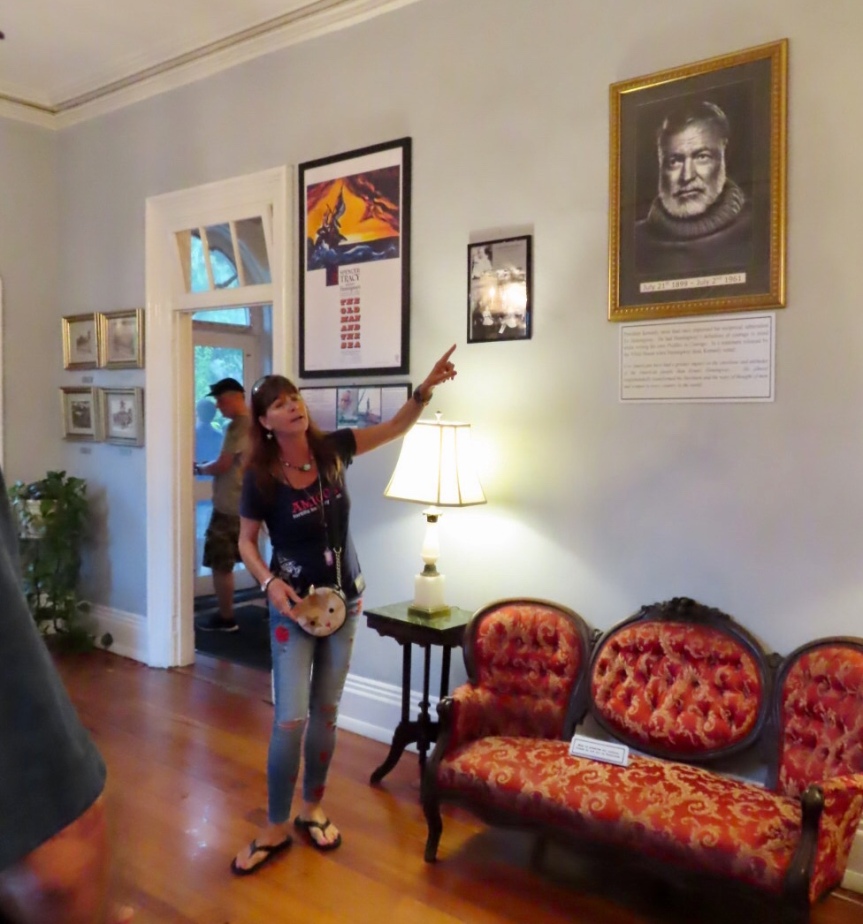 Alisa, giving us the scoop 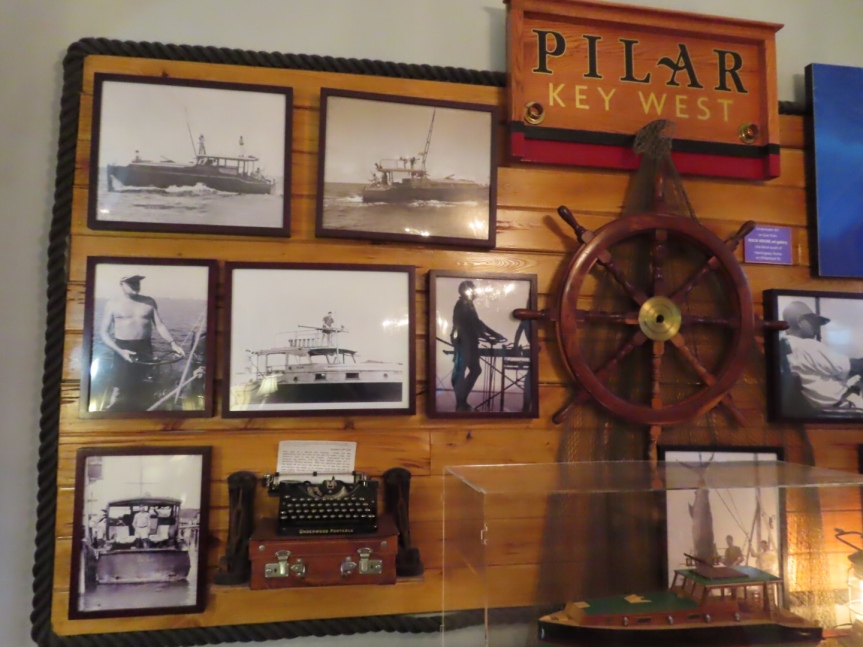 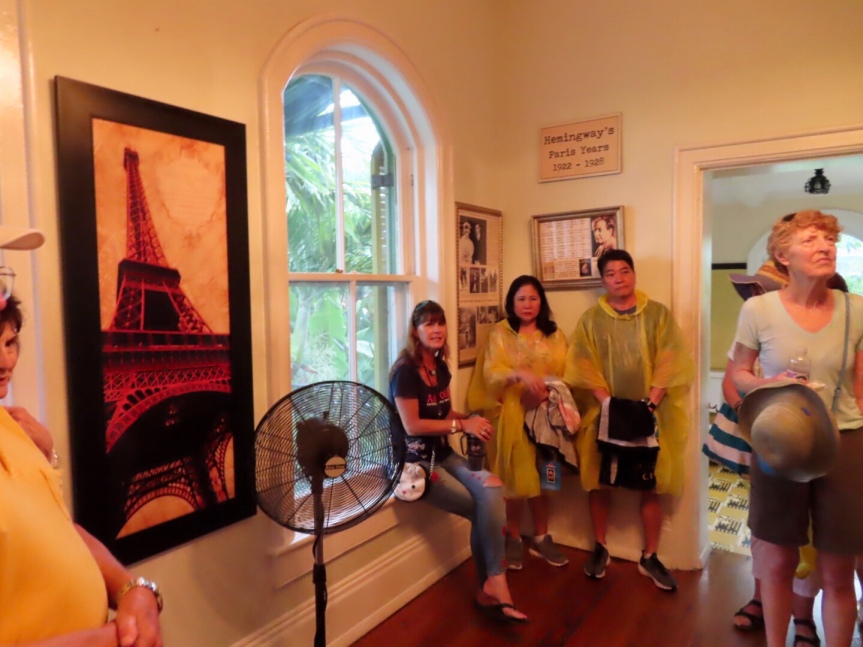 Oh, did I forget to mention the six toed cats? There’s 52 of them patrolling the property 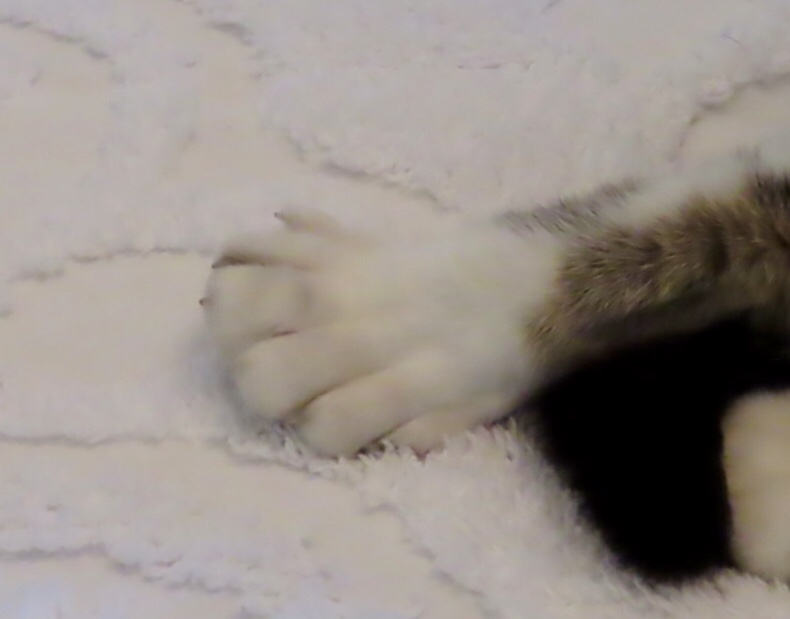 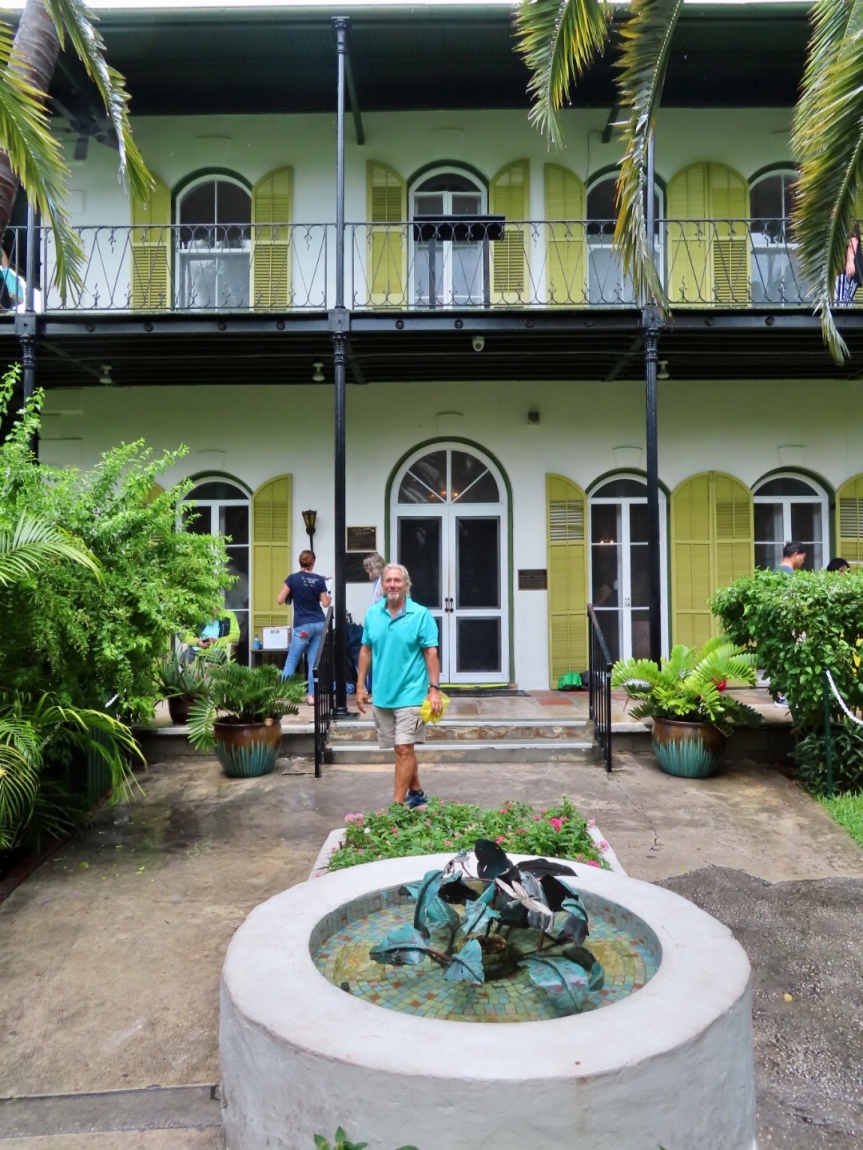 By now I was getting hangry and PJ could tell it was time to feed me or live with the consequences so we entered the first door we could find with a menu out front. Moondogs had excellent sandwiches and a bohemian vibe that fit the mood of the day. We sat at a miniature table and artfully consumed our gourmet canapés. We finished lunch with ten minutes left on our four hour parking ticket and a twenty minute walk to the car park. We hoofed it through the quaint downtown historic district and even though we were late to the gate, we had beaten the meter maid and were free and clear. Time to head back to camp and see how the hound is faring.

Lots of our fellow campers had fled the scene while we were gone leaving us plenty of room to expand our territory. The shade had moved to the backside of the RV, so we set up chairs in the empty spot adjacent and let Cali roam a little while we watched the feral chickens and iguanas vie for whatever it is they are feeding on across the street. Key West is famous for its gypsy chickens. They are wandering all over the town crowing at all hours of the day and night. Some people love them and some people hate them. Since we’ve been sleeping with the AC on due to the oppressive heat, we don’t mind them at all. They are fun to watch and there’s always the grouchy camper they seem to ferret out so the roosters post up on their power pole and cockadoodle right into their window. The iguanas are awesome, too. There’s a little herd with a dominant male that runs the show. They rule the tenter’s campsite, foraging out from a clump of mangroves at the water’s edge. I think the campers are afraid to come out of their tent. 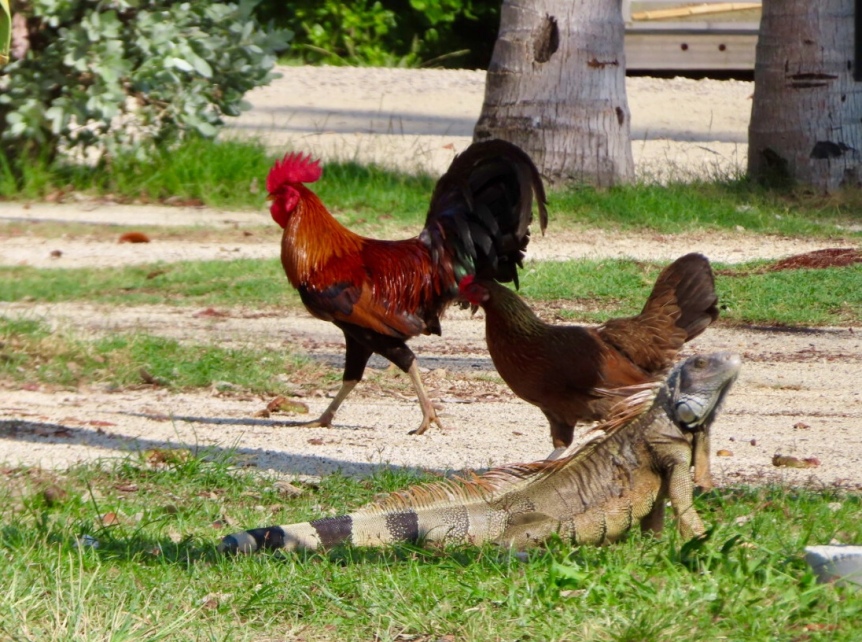 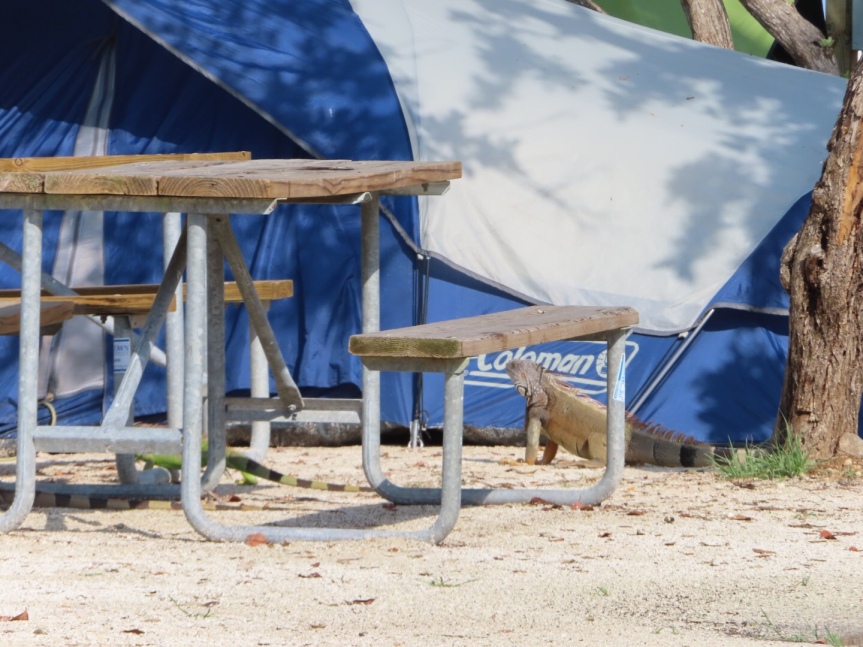 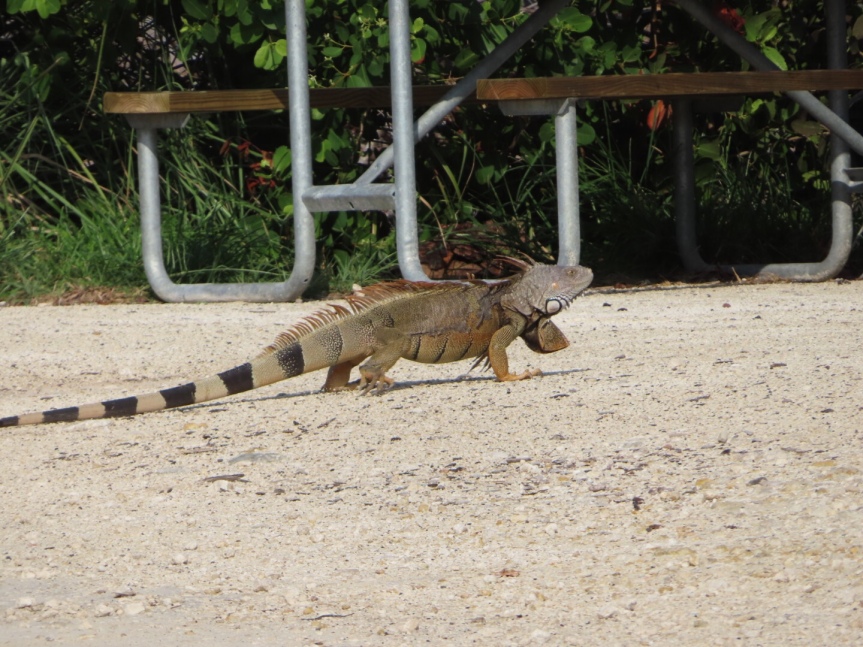 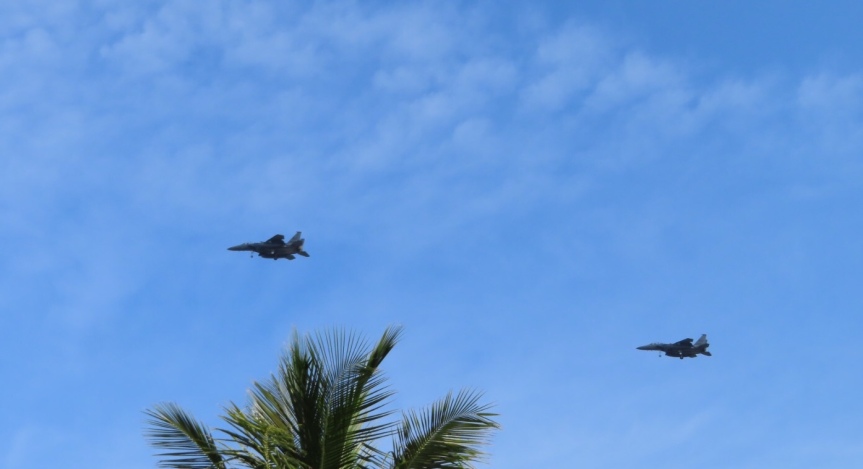 In the evening another cluster of dark clouds started moving in from the northwest bringing more rain and a few gusts of wind. We moved inside and PJ began planning more adventures for tomorrow.