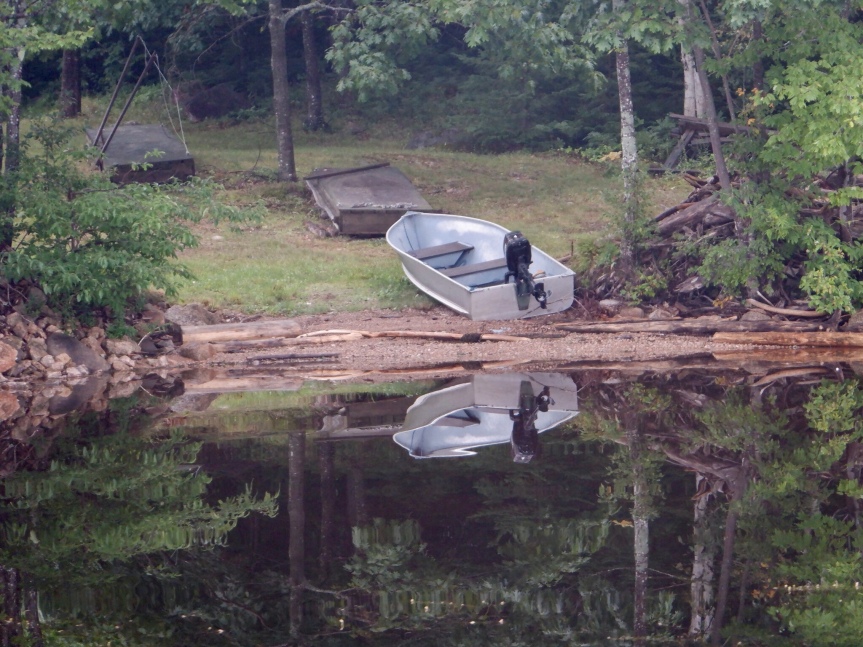 When we awoke, the rain had passed and the broad St. John’s River was calm and glassy. I took the paddle board out and started going south for about two miles hugging the north bank hoping to see a moose or maybe a bear, as after all, this is Bear Island. The truth is, it’s not really an island more of a peninsula and as far as bears go, I didn’t see any. But I did see some charming waterfront homes peppered among the beautiful forest that lines the riverbanks. On the far shore there were more farms and more undisturbed green areas. New Brunswick has some breathtaking scenery and the abundant rain makes for lots of green (and mosquitoes). 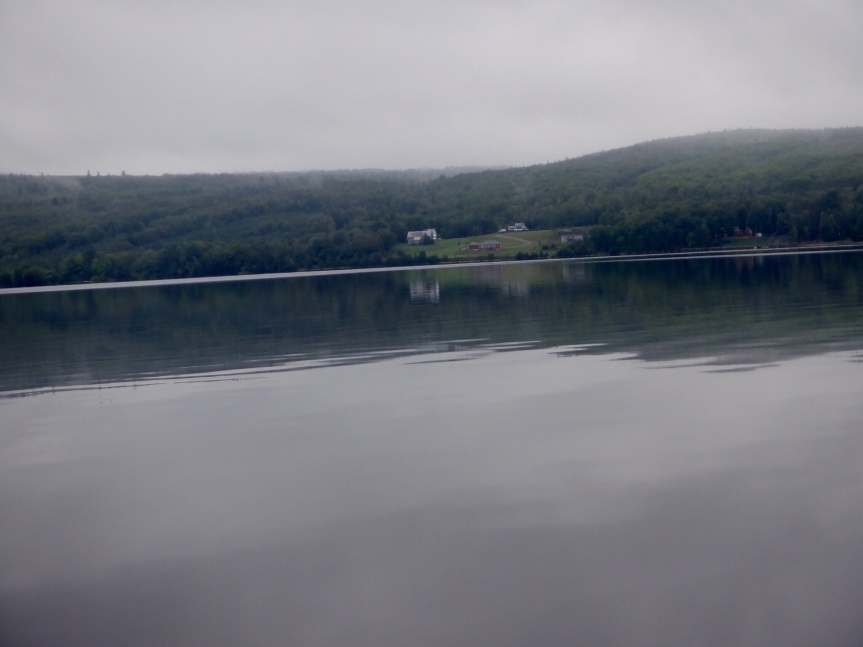 As I was nearing camp on the return paddle, out popped PJ from the launch area on her board. We decided to head west and see what there was to see going in that direction. More trees, less homes, a man sawing logs (not sleeping, just cutting timber), and a large eagle soaring overhead. We turned for home and PJ went into a power paddle sprint and left me in her wake. Paddling is always good for getting the blood pumping in the morning and the jump in for a swim is guaranteed to leave you wide awake. 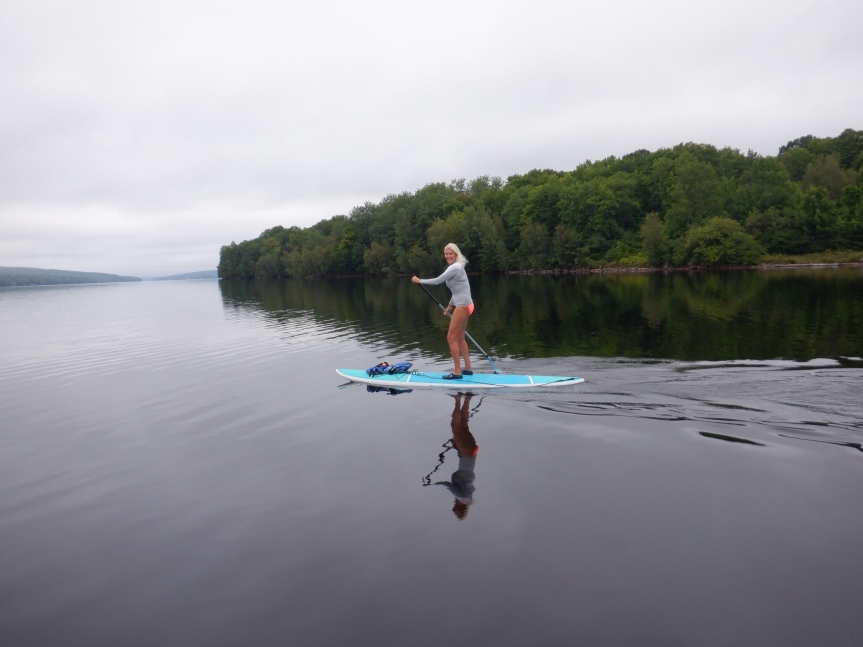 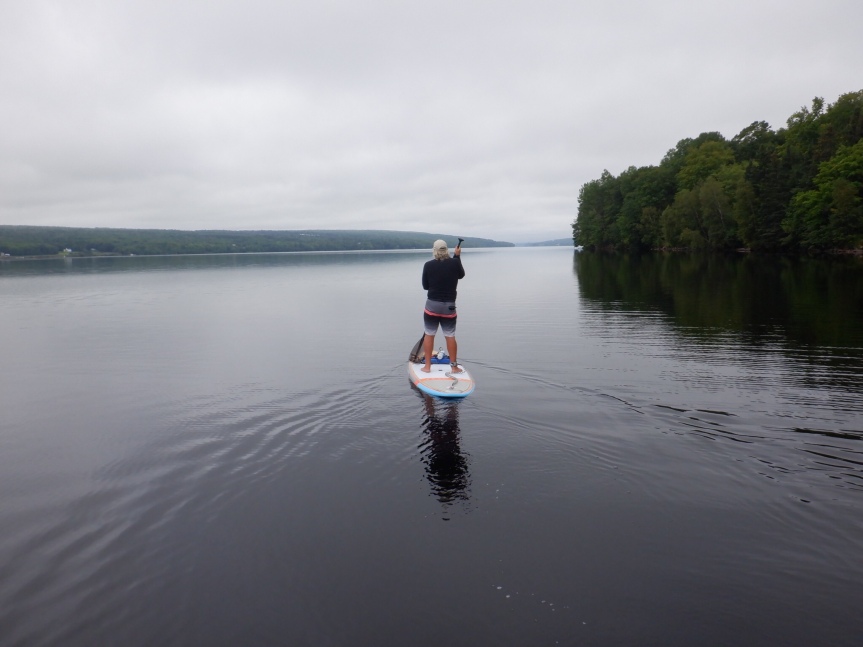 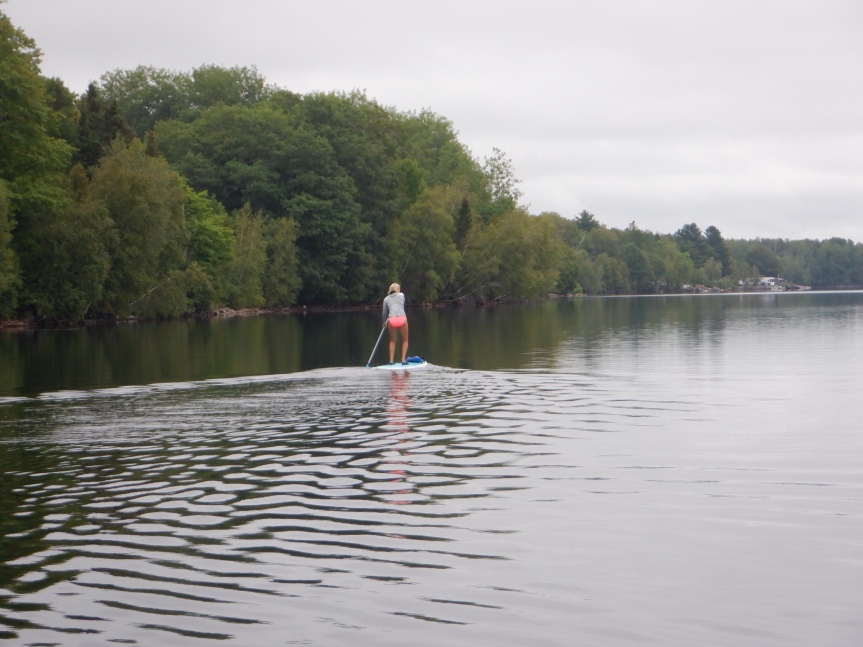 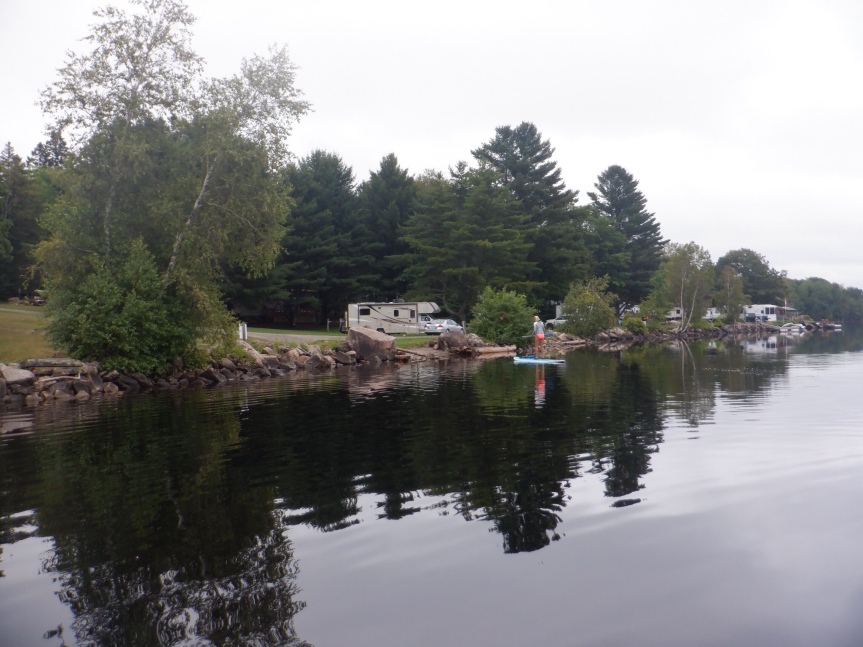 Valerie, the owner at Great Bear, told us to take our time breaking camp and leave when we wanted. We had coffee and sat for a while at the table doing internet stuff and figuring out our route. Our Verizon plan covers Canada but they didn’t tell us is that the data they offer here is 3G and painfully slow and weak. I couldn’t get any pictures to load on the blog so I finally gave up and thought I’d try again in a more populated area. We stuck on the Canada sticker and were ready to hit the road. 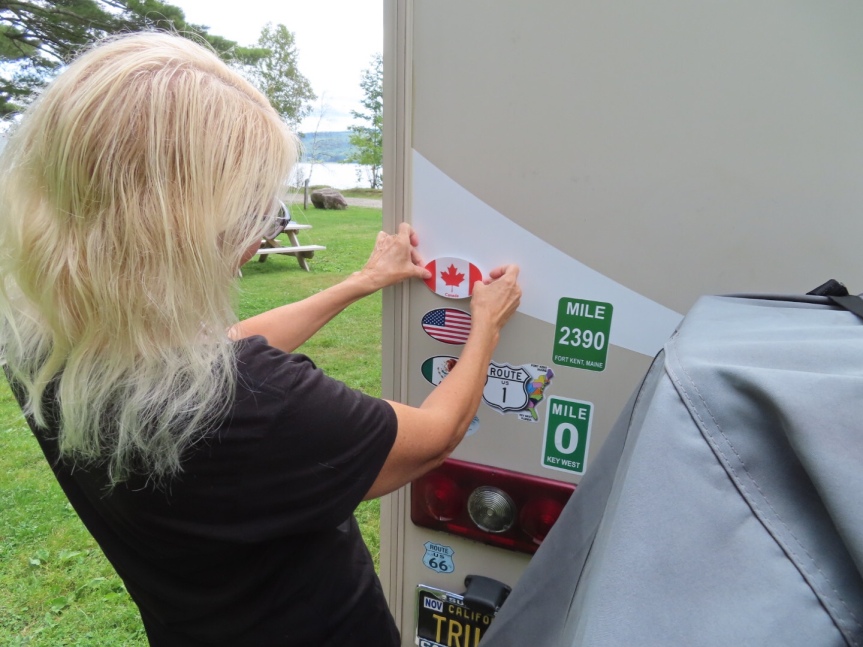 Most of the drive was on rural back roads with a stretch of Trans-Canada 2 in the middle. Mostly decent pavement but some patches of potholes and bumpy patches, mainly at the beginning and towards the end as we neared the National Park. We worked our way through some construction projects and made a couple of stops. One was in Fredericton where PJ went into the Sobey’s supermarket while I sat in the RV patiently massaging the internet to get the pictures to upload. Then nearer to Fundy, we paused at a haunted Lion’s Club building for a quick bathroom break. 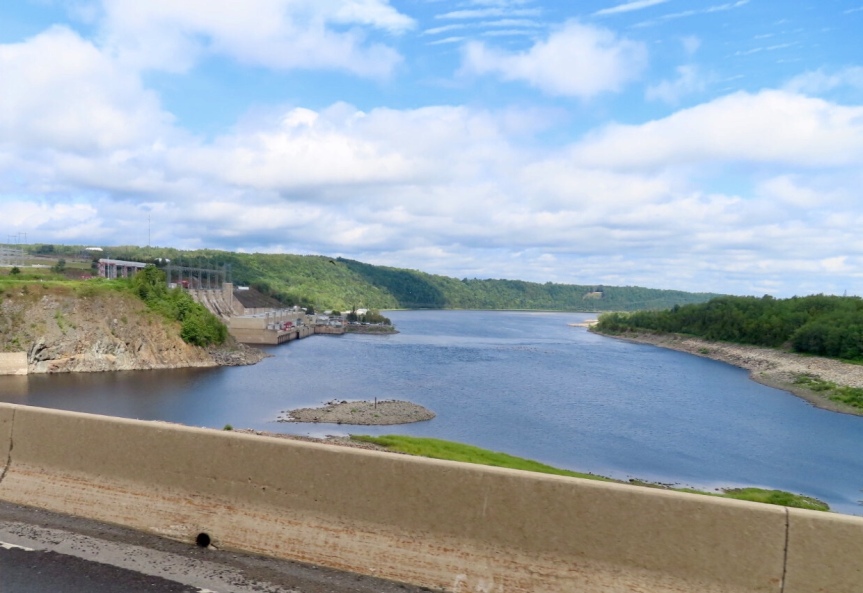 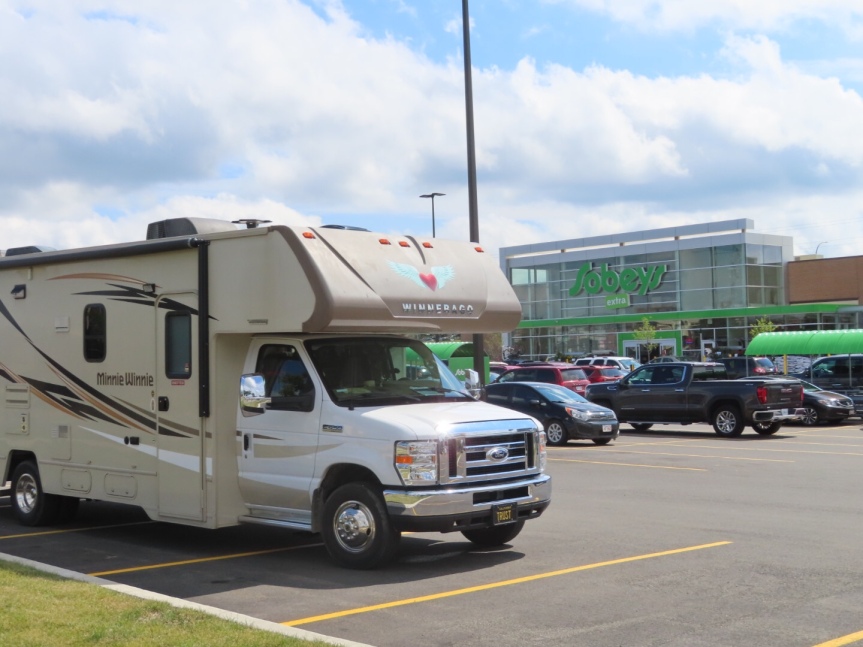 In the late afternoon, we pulled into the park and got set up. There are amazing views of the Bay of Fundy and the little town of Alma below from the campground. PJ had picked up a variety of sushi from the Sobey’s so we had that for dinner and read taking it easy after a busy day. 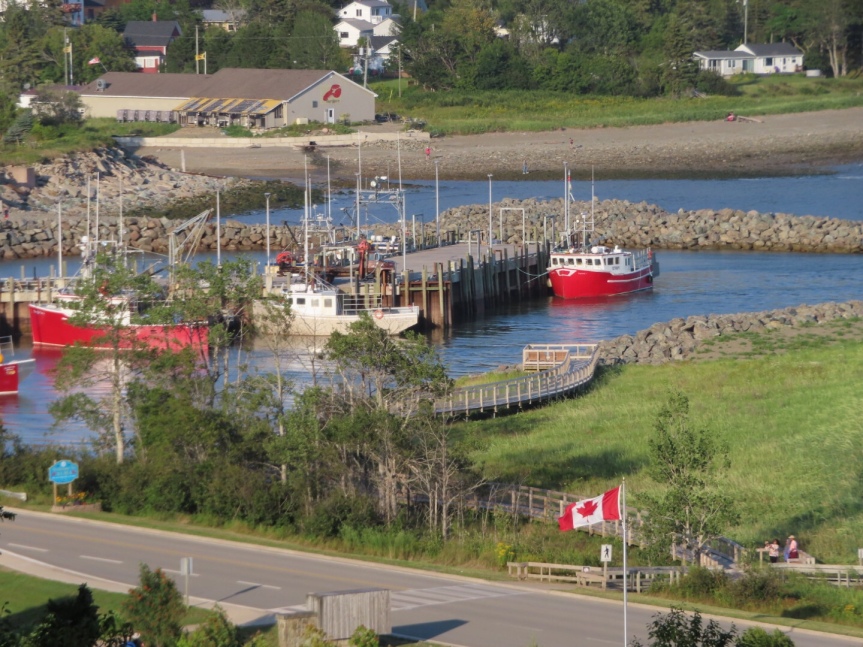