Cali and I got all of our gear stashed away and said goodbye to our fellow Heart on the Wing neighbors from Canada. I was topping up the air in the front tires when I noticed a woman watching me intently. Ama is mentally challenged and my mini compressor had her mesmerized. We chatted as best we could for a minute then she followed me around camp observing every detail of the packing up process. She pointed things out to me to make sure I wasn’t going to forget them. I sat in the cab and busted out a quick post not knowing when I might have decent internet again then it was time to hit the road.

I gassed up at the highway and pointed south down Mexico’s highway 200 towards Colima and Michoacan. We’re in banana country now with large plantations coating the hillsides.The road was decent for the most part, the usual pothole here and there along with the ever present topes but the construction was minimal with only two stretches of repaving going on. 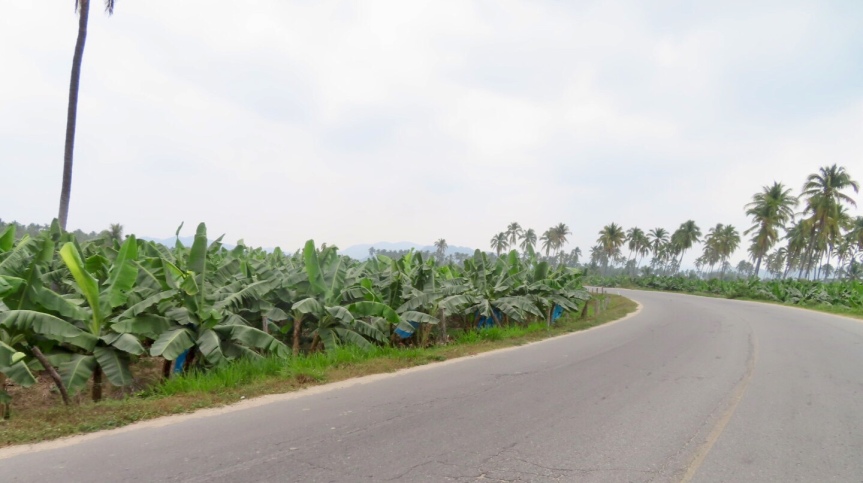 I passed through the big shipping center of Manzanillo and into the state of Colima. The road in was a newer toll road with two lanes and nice smooth asphalt. Things have really grown throughout the area in the many years it’s been since I last passed this way. Getting through Tecoman required a bit of focus. The GPS isn’t always on its best behavior in some of these urban areas. I popped out on the southern side alright and slid across the border into Michoacán where the landscape turned mountainous almost immediately.

I stopped for a bite of barbecue chicken and to let Cali have a walkabout. I stepped into the small grocer next door and loaded up on Whiskas before heading into the jungle. We reached La Placita and a flood of memories entered my mind. It was just a few more twists and turns then I reached the turn off into Ticla just past the Rio Ostula bridge.

Michoacán says “You are what you eat”

I was remembering the rutted, bumpy dirt road in but it is now paved, one of those facade cobblestone roads with, thankfully, smooth concrete lanes for the tires. It was an easy drive in. I parked at the end and had a look around. Maybe a little tight for an RV right at the break. I moved over to the new complex to the south and got a big palapa and a patio for 100 pesos a night. One of those times where it is advantageous that they charge by the person. So I have a thirty foot patio with electric and a light bulb for ~ $5.50 a night.

I set up then paddled out and caught a few fun waves out front. There was about ten people out but I managed to nab four decent little rights. The restaurant here offered internet for 50 pesos so I paid but it still didn’t work. I spent the evening wandering around town looking for an internet connection, hoping for a way to contact PJ so she doesn’t worry that I’ve been carried away by banditos. The owner of one of the palapa restaurants at the break hooked me up to her Bluetooth and I was able to get off a text. Later, I paid another lady at the store up the hill 15 pesos for an hour and once again, it wouldn’t connect. Truly in the bush now. 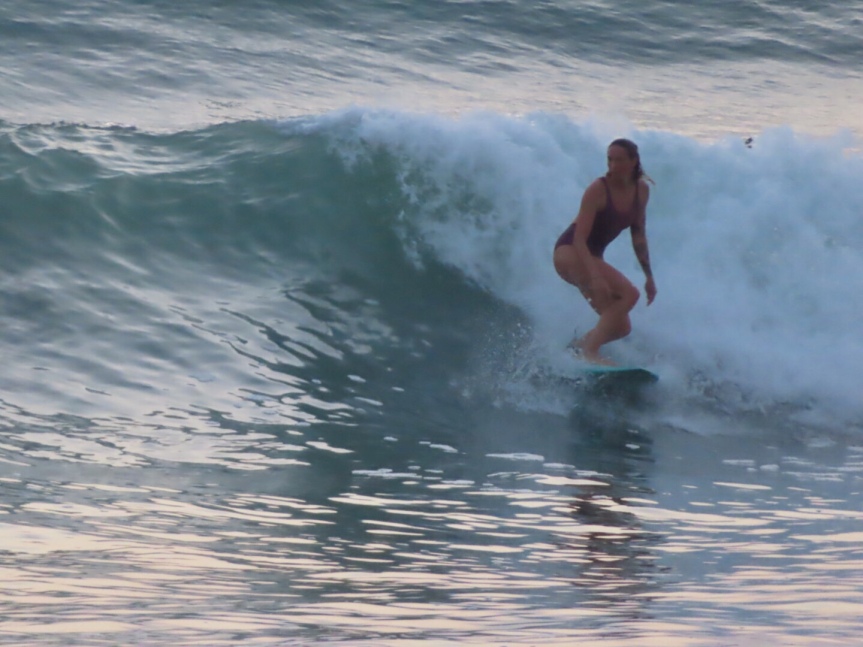 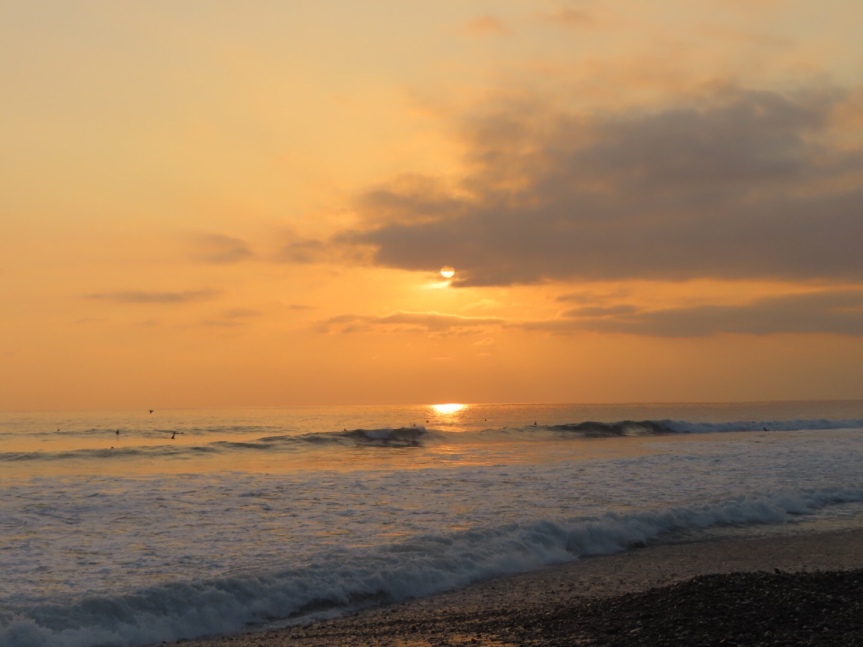 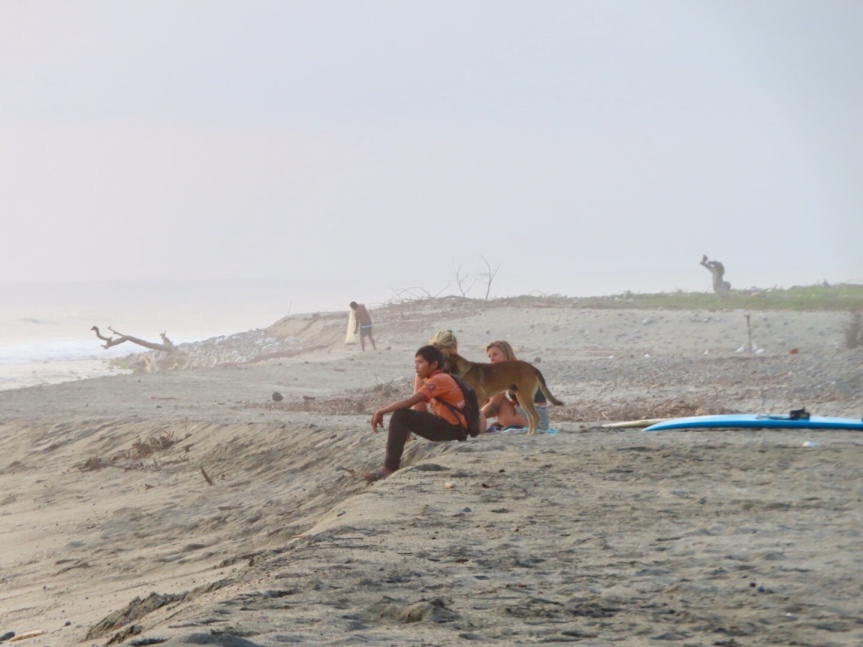 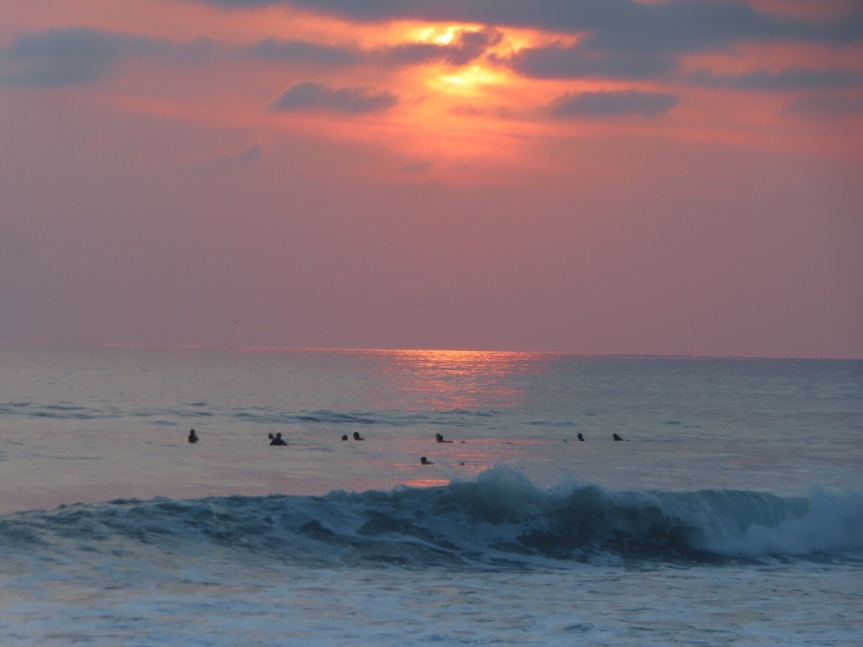