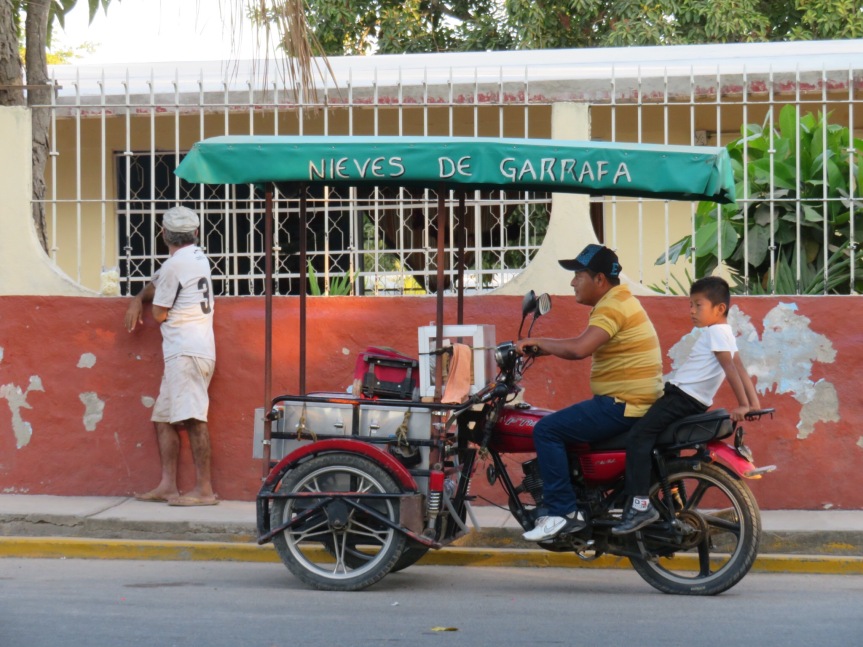 Days go by without much excitement. Can’t justify repeated posts saying ‘took the dogs for a walk this morning’, so I haven’t been putting anything up the past few days. Unfortunately, I’m still out of the water due to the ear. I find myself kind of lacking in ambition without PJ around to do things with. Exploring is always more fun when I get a chance to see her reaction and see things with fresh eyes. 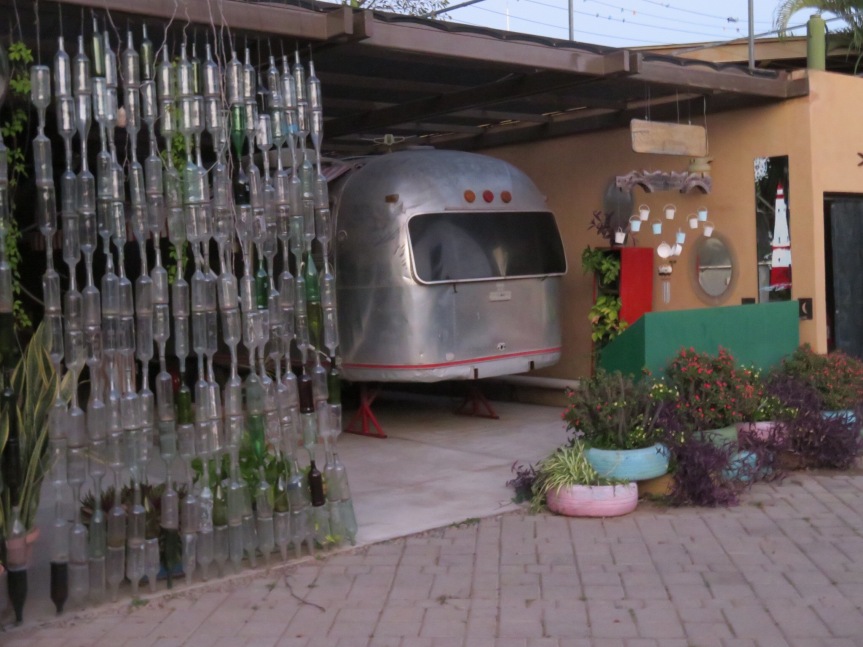 Been sleeping late a lot lately. My stomach was a little funky this morning when the goat wake up call roused me from my slumber. The kids show up around eight or nine every morning and let me know it’s time to start stirring.

​​
Arturo, the lawn guy, was watering the windows, our bikes and the patio chairs. After cooking up a tasty omelette for lunch, I headed over to the book exchange and traded in my finished books for a couple of new reads. Yesterday, I read a James Patterson novel cover to cover. Today, I picked out a western in English and a Mexican translation of a Robert Ludlum mystery.


Before heading over, I started filling the tub out in the front yard with some hot water. When I got back it was close to full, so I threw on my trunks, grabbed my book and had a nice soak in the sunshine. After a half hour or so, I moved into the shade of the bamboo grotto and read in the leafy coolness with Koda napping at my feet. 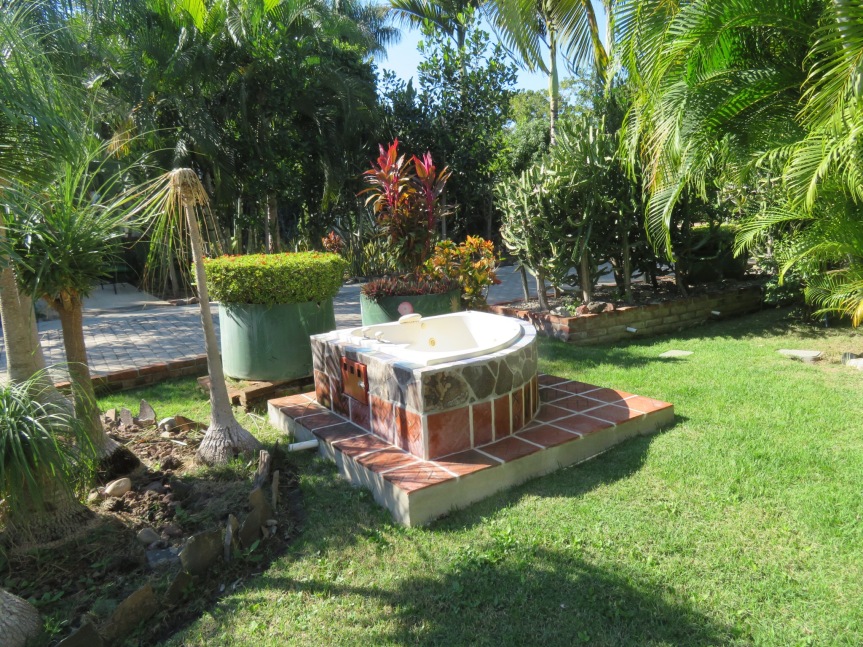 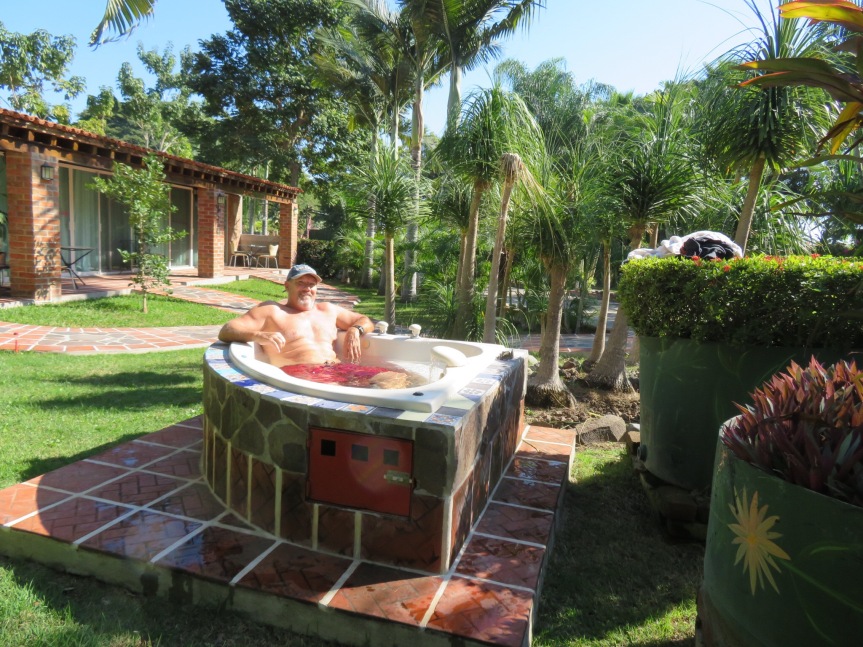 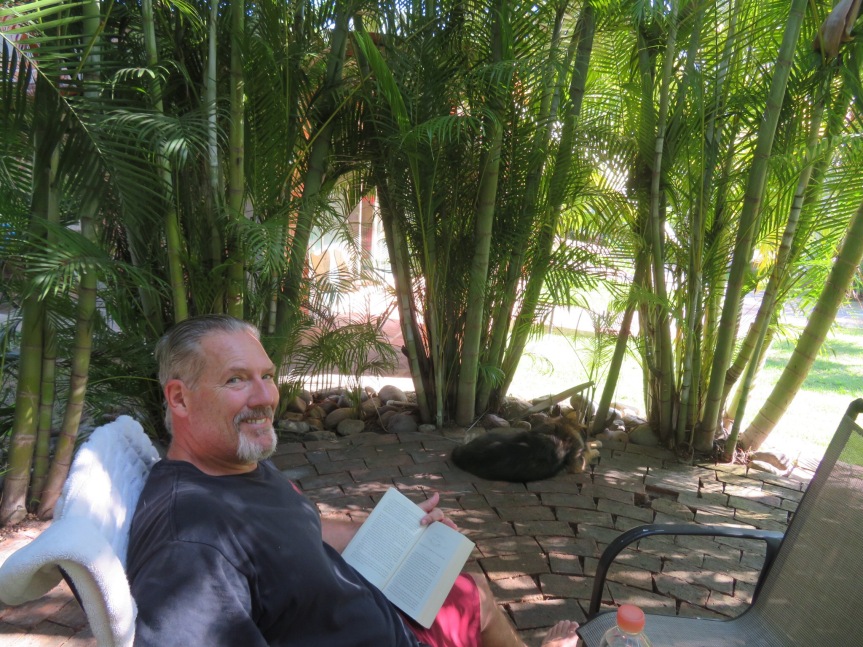 I moved the bikes over to the front patio and dried them off. They have started to show a little rust from getting wet too often on the side of the house. I jumped on the freshly serviced bike and rode it into town. I stayed on the inland side of the main highway and explored up and down all of the side streets to see what was there. I made mental notes on what businesses were hidden away on side streets and the houses that were for sale or rent. Always curious to see what’s available and at what prices. I passed by my friend Steve’s house but didn’t see him out in the courtyard. Made a quick stop at the bank and withdrew a few pesos to get me through the week. I came across a local Spanish AA meeting hall on a back street near the feed store. Had a brief conversation with one of the members who was there doing some set up on the hall. I’ll have to come stretch my Spanish a little bit. 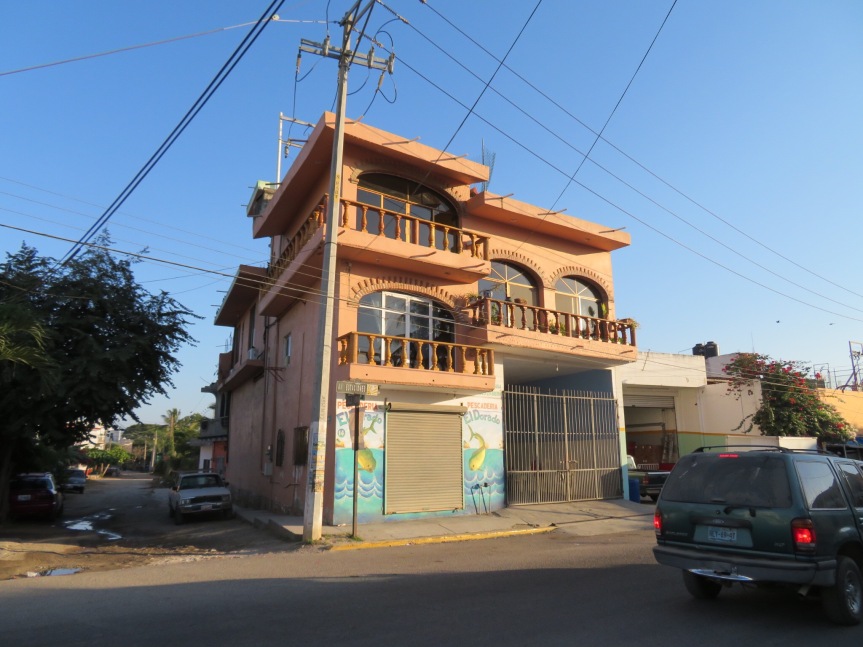 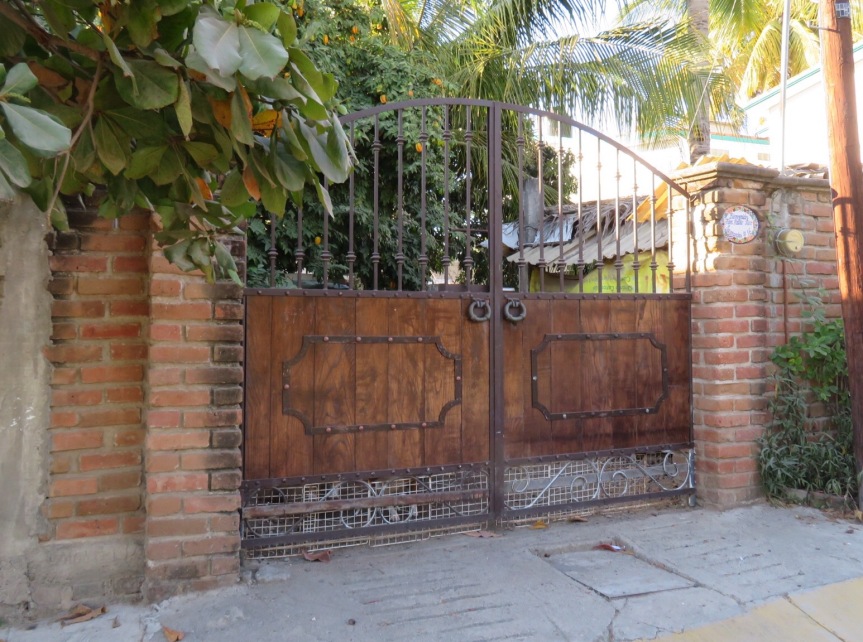 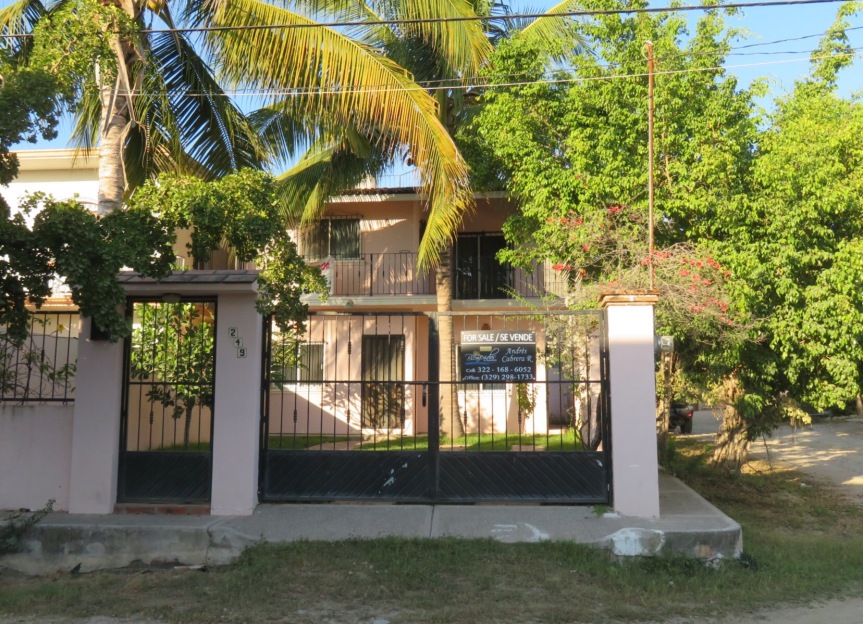 The sun was low in the sky when I stopped at the taco stand at the three way intersection in front of California Pizza. It was a great vantage point for watching people going by. The topes make all of the traffic slow to a crawl. Lots of kids were still hanging around the school across the street. Other vendors with carts had set up in the area : a fruit cart, a motorcycle cart with ice cream and a guy selling the bags of chicarones and chips that they cover with hot sauce. There were several other patrons ordering up tacos and the little folding bits of tastiness were excellent. Four tacos and a 7-up for under $2.50, my favorite kind of dinner. Took my time, people watching and wincing as cars, dogs and motorcycles narrowly missed one another as they roar mindlessly into the three way intersection with no stops or order of any kind. 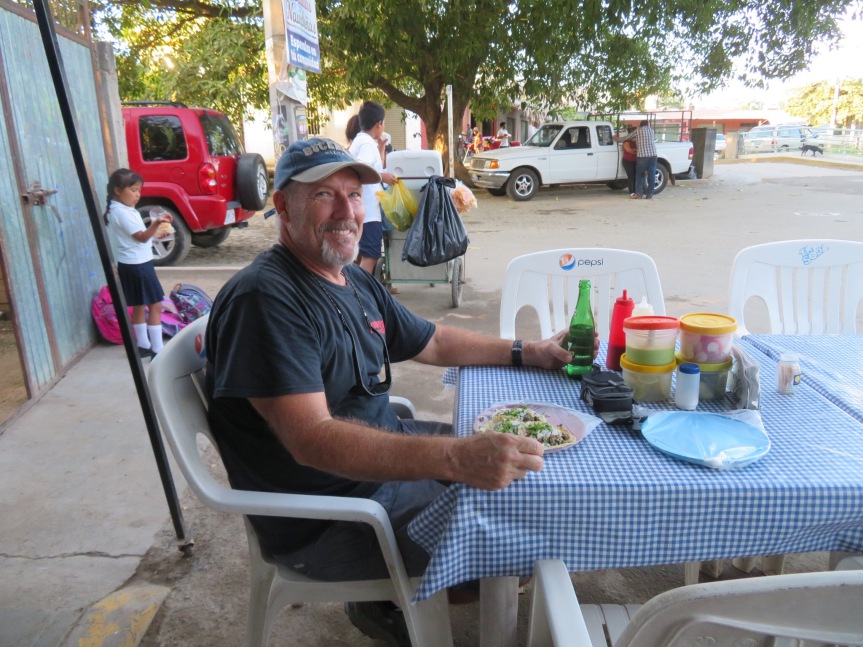 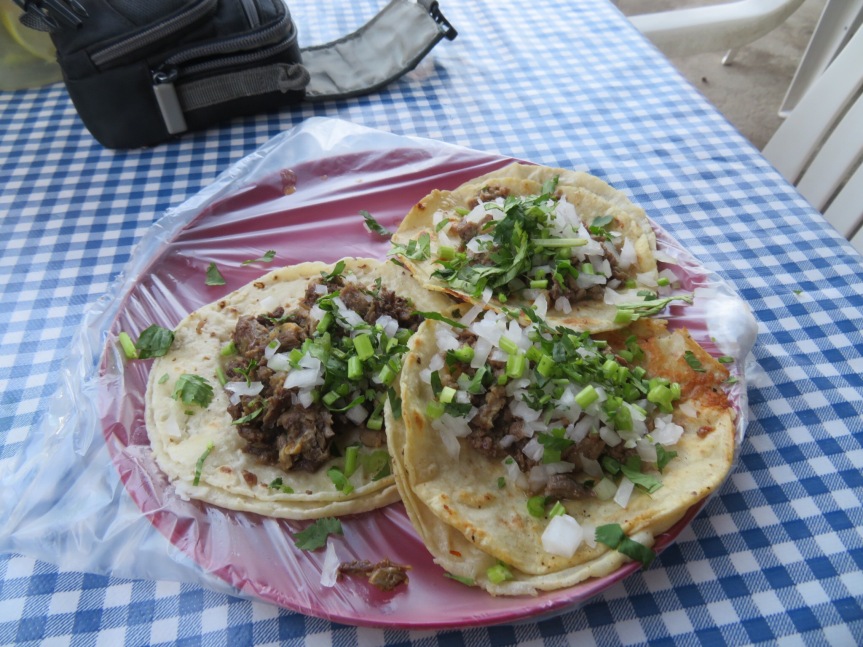 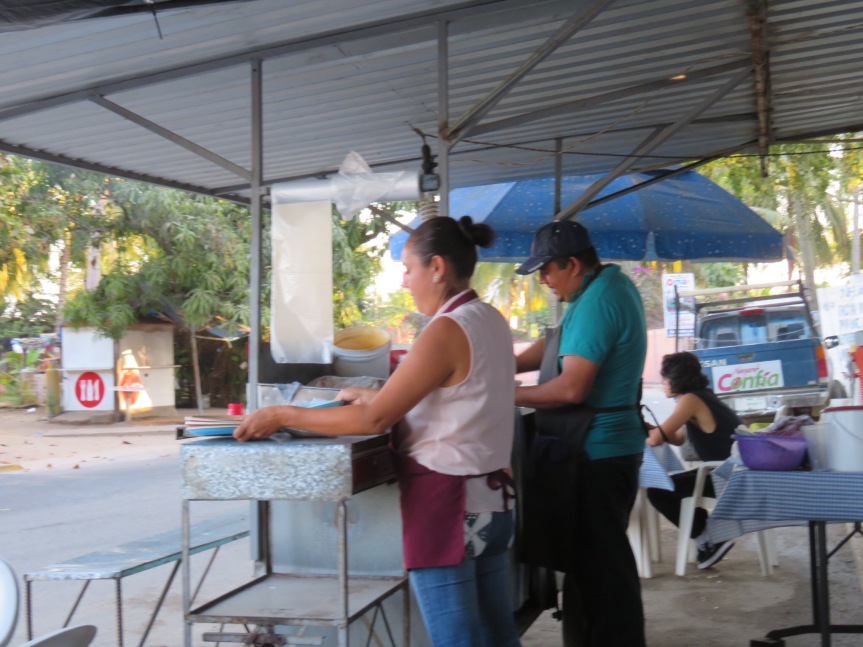 Paid up my tab, then rode on back down the frontage dirt trail to the neighborhood behind Los Arroyos Verde where I stopped in at the mini-super and got a pack of choco-rollie’s. Talked to the ladies a while then had a brief conversation with a couple who were walking the neighborhood heading back to Los Arroyos. Got home and walked the dogs then watched a little basketball as I was posting up this missive.

We were supposed to get some new neighbors moving in today, but it is already 11:00 p.m. and no signs of any newcomers. We’ll see if they show manana.

3 thoughts on “Exploring Around”