​​
Was a little slow on the start this morning, grumpy and tired from a poor night’s sleep. Took it easy most of the day trying to recoup some energy for tonight’s foray into Puerto Vallarta with Arlene and Bryce to watch the carnival parade down the malecon. 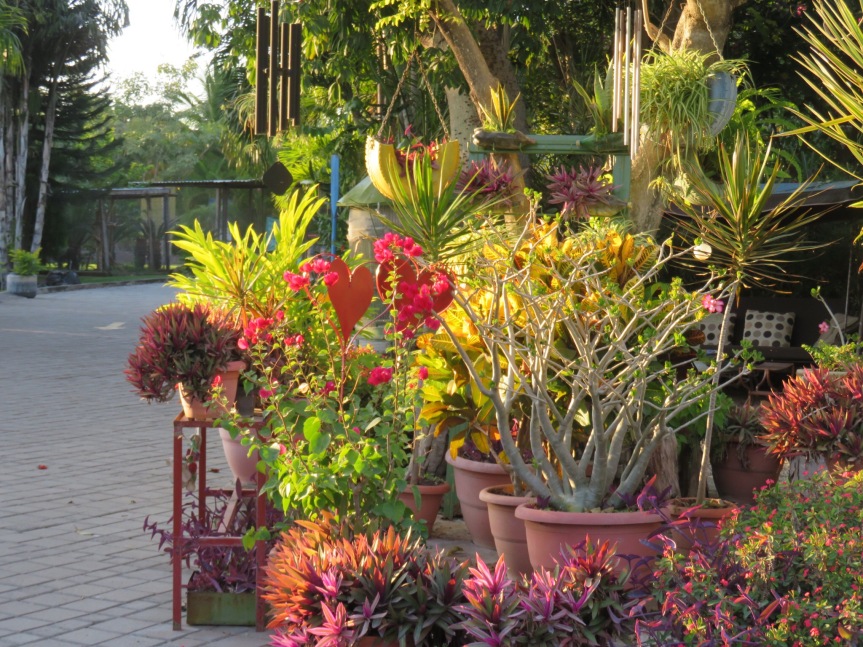 Around four in the afternoon, I hopped in the shower to rinse off the fatigue and give myself a new perspective on the day. PJ came in all in a panic saying she had dropped her wedding ring somewhere out on the lawn in between the casita and the RV. It was about ten minutes before the time that Bryce and Arlene were scheduled to pick us up. To complicate matters further, Arturo was out back mowing over the very lawn area that might or might not be housing the renegade ring. 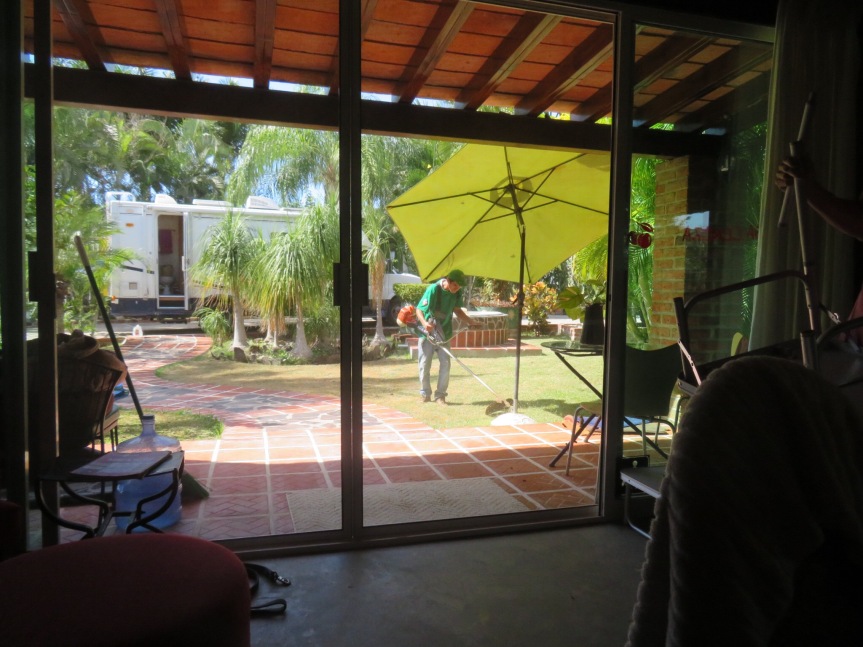 We were wandering around the lawn looking at the ground when Bobby came out and asked us what was up. We explained our dilemma and he went into his Casa and reappeared a few moments afterwards toting his metal detector. I got Arturo to dump his grass clippings and started sifting through them while Bobby was canvassing the lawn hoping for the telltale beep that would alert him to the presence of a small metal object. PJ ran out and told Arlene our plight and we were just about to give up the hunt when Bobby came walking up carrying PJ’s ring! She was plenty stoked. We rushed out to the driveway and climbed in the car for the trip into Puerto Vallarta.

We stopped at the Oxxo over next to the Chedraui store to pick up John and Roger (pronounced Rah- jay since a Qubecois) and we continued down highway 200 towards the city center. John pulled the short straw and was elected to ride in the cargo bay in the back of the SUV. He is a very mellow taciturn guy and had no problem with the assignment. The ride was easy and the crowds were much lighter than I had anticipated. We parked the car up in a large garage on the malecon and walked the rest of the way down to the La Posta Italian restaurant overlooking the parade route. It was beautiful breezy afternoon and the boardwalk was alive with anticipation of the Fat Tuesday celebrations. 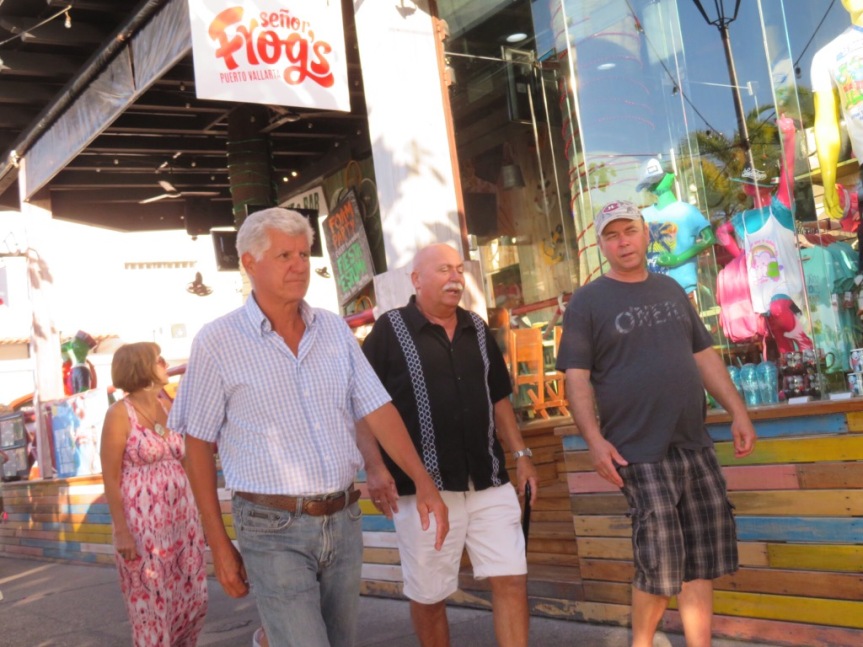 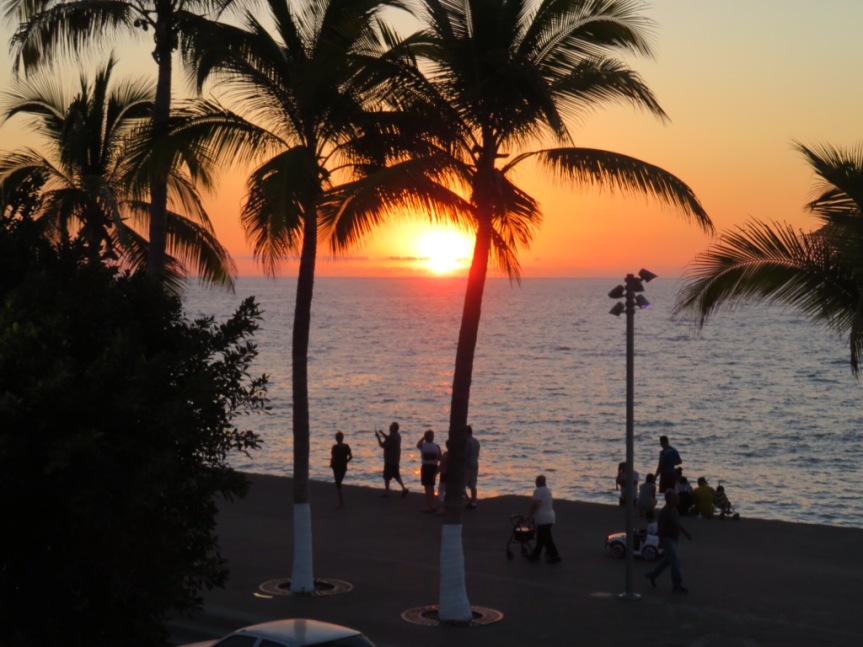 Mike and Lori had reserved tables on the upper level with a straight on view of street below. We sat and chatted ordering up a fine Italian dinner. PJ was feeling bold and ordered up the grilled octopus. When it arrived, the look on her face was one of intense skepticism but she stepped up and dug right in. She drew the line at eating the head but otherwise gave the chewy delicacy a good sampling. The appetizer plate and bruschetta were amazing and the chicken cacciatore was decent. 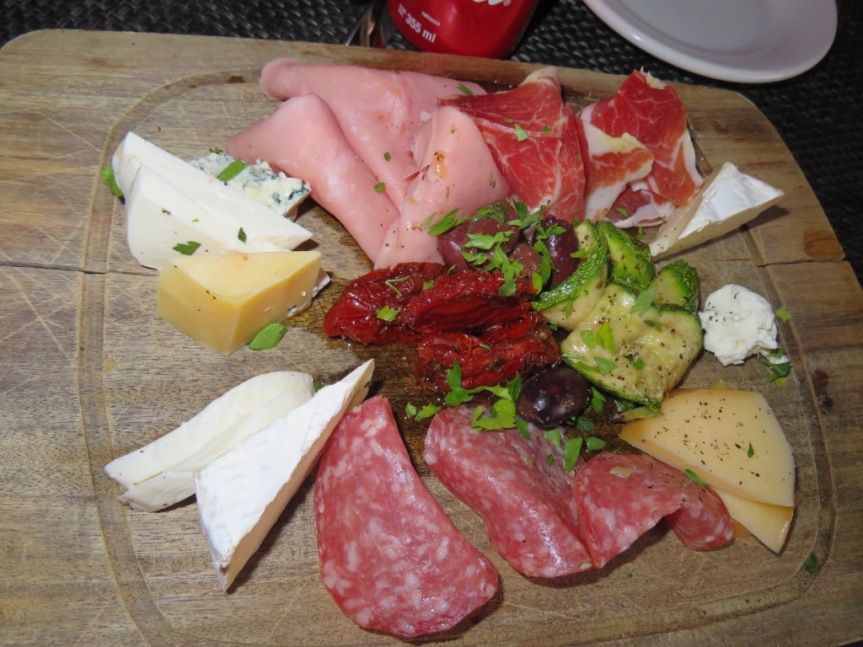 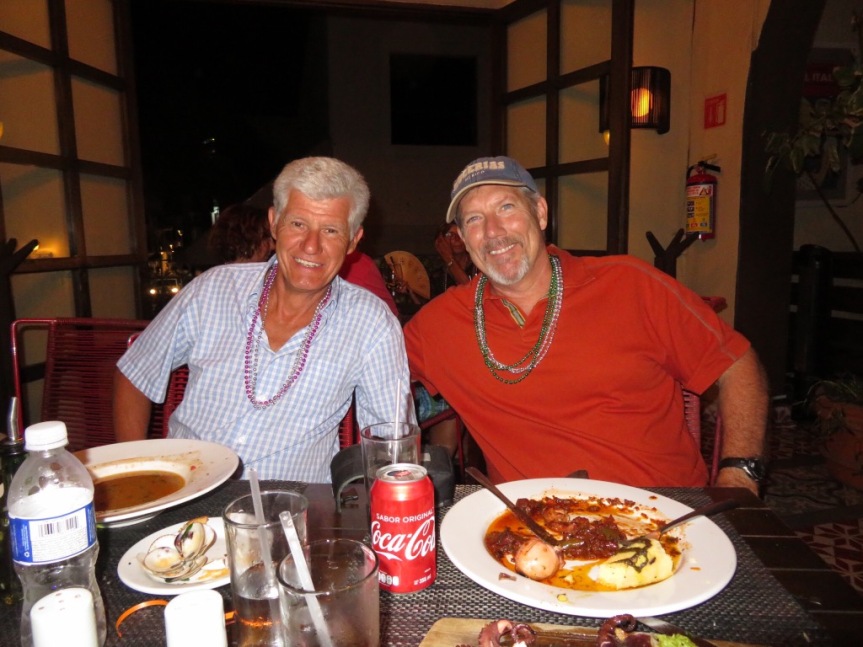 We could hear the drum beats moving up the street, so we moved the tables away from the window and we all stood at the iron railing watching all of the marchers and floats pass by below. The parade in Puerto Vallarta has morphed into a combination Marci gras and gay pride affair. Lots of divas riding on top of vehicles and colorful floats and costumes. PJ went down on street level to yell at the marching crowd and throw beads into the air barely missing clocking the participants in the head as they danced by on the cobblestones. She ran out into the street to wiggle and dance in front of motorcycle guy as his display slowly rode past bringing the line to halt as the crowd enjoyed the show. 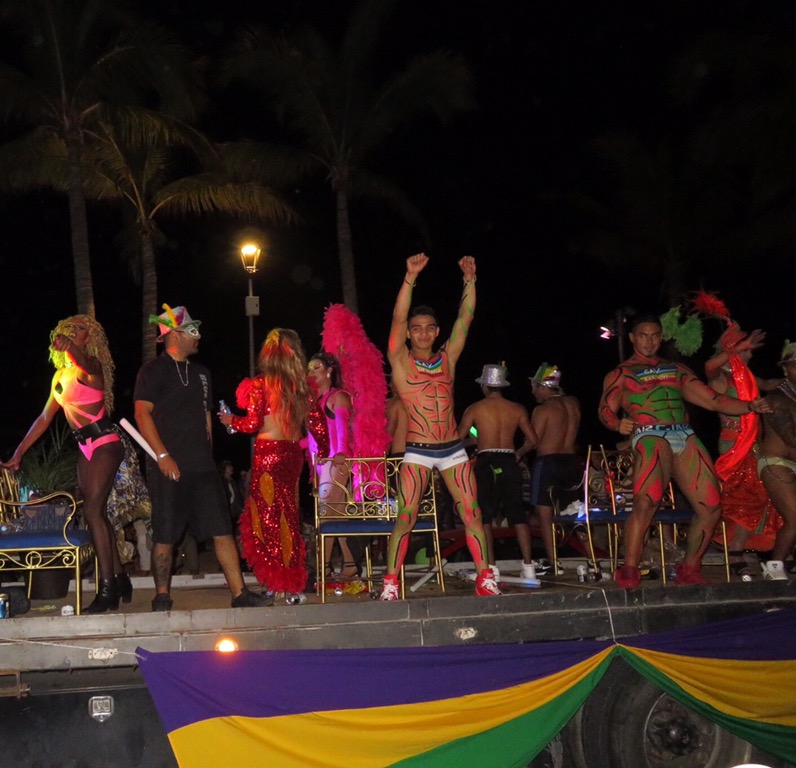 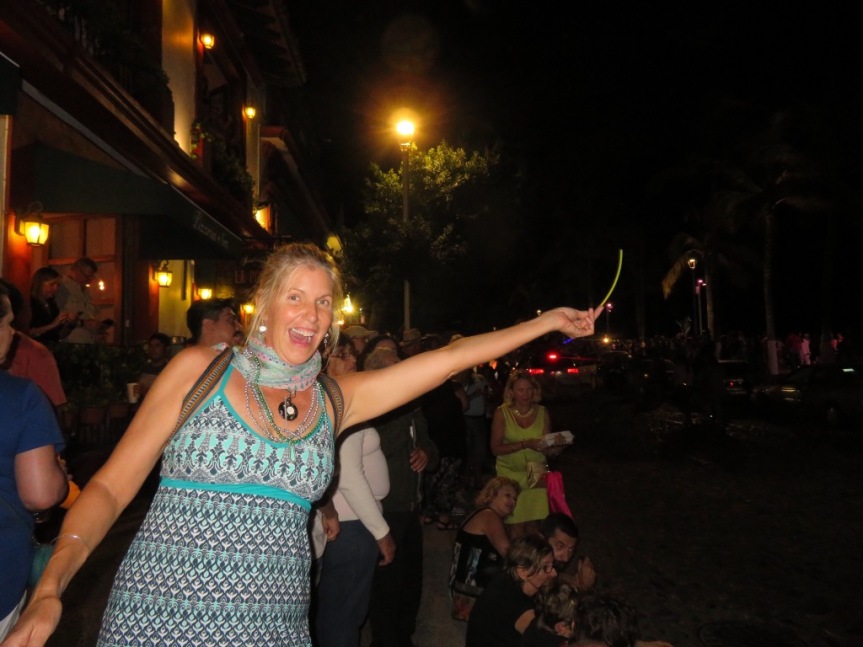 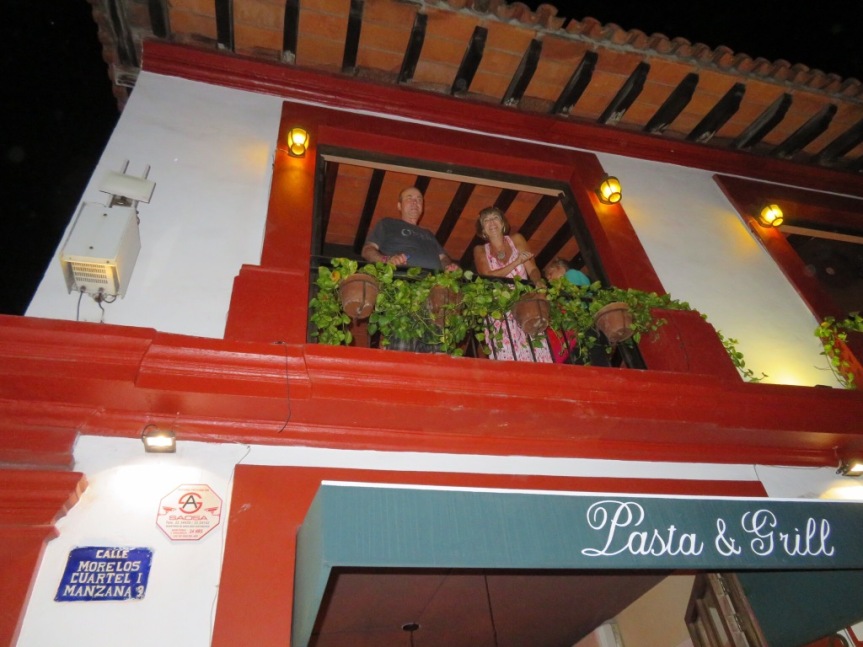 Soon, the last act passed on by and we paid up our bills and had a stroll down the malecon. The pirate ship sailed slowly just offshore with people swinging on ropes from the mast. A fireworks display started up right on the walkway with a dazzling display of pyrotechnics just overhead. Crazy cool stuff. 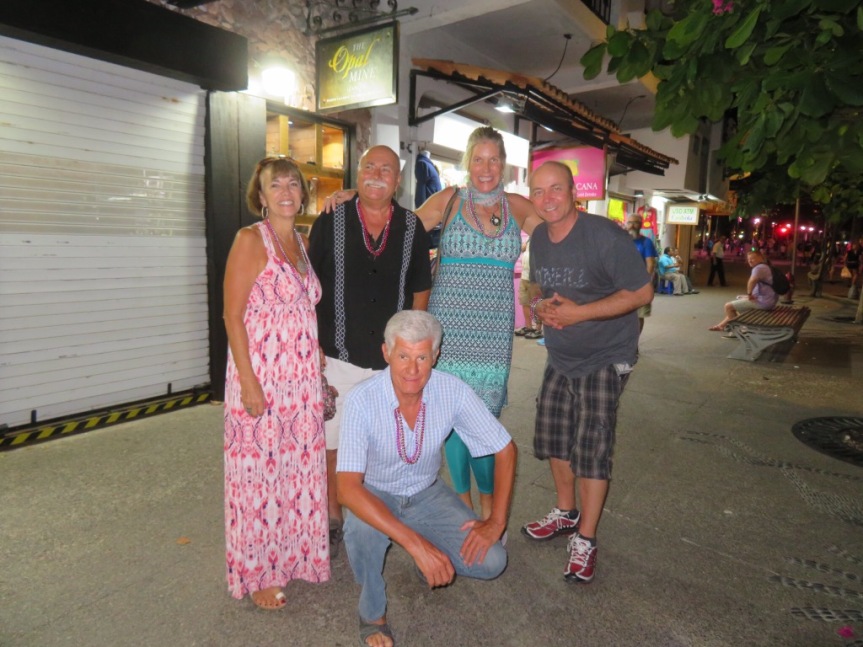 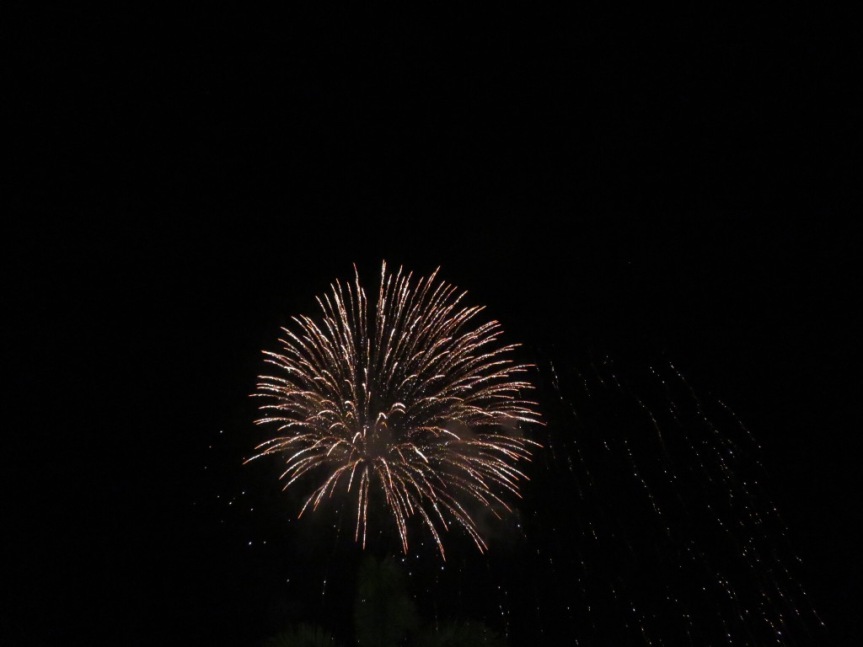 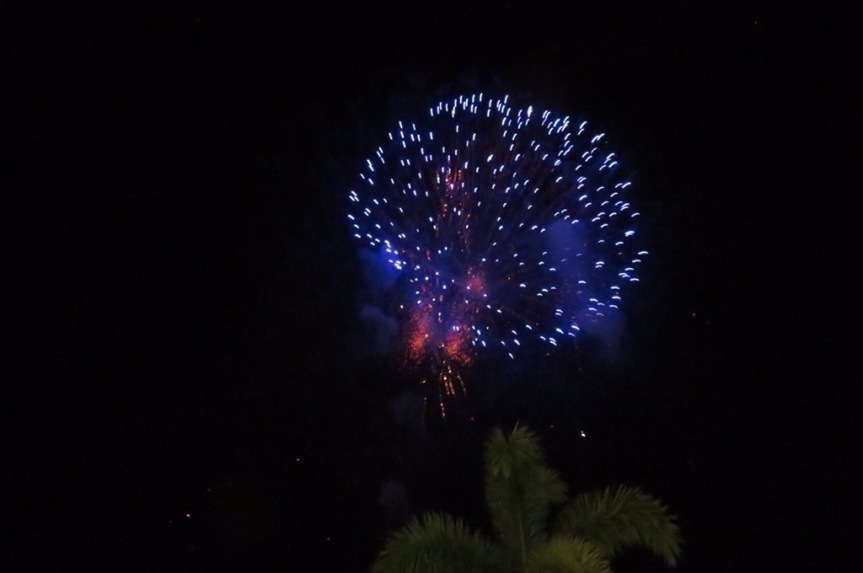 We looked in a couple of shops then all piled into the SUV for the return trip to Bucerias. Exciting night on the town. Much thanks to everyone in our crew for making the reservations and getting us down there. A truly memorable evening.