I spent the morning loading a few last minute items and double checking my “not to forget” list. Connected up the bike rack, put the bikes in place then Sandy and I wrestled with the new bike cover to get it to fit over the bikes. Hung up the ladder and chairs then enjoyed a final poached egg breakfast. Lee and Brendan stopped by to see me off. It was after 11:00 when I finally rolled down the hill to start my journey. Thanks so much to Dad and Sandy for the months long hospitality and hip replacement rehab. It was an awesome visit. 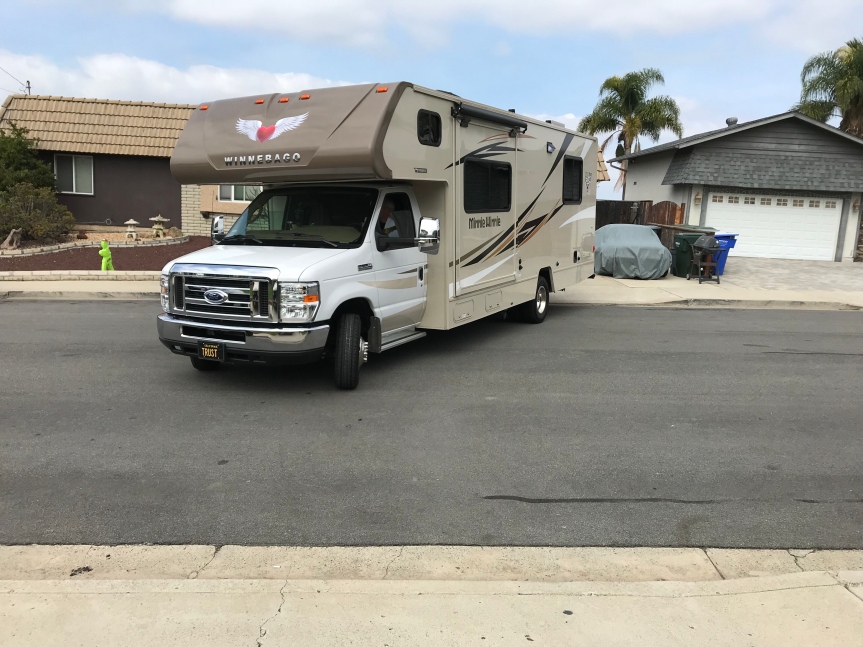 My first stop was the Chevron down the block. Someone had given me a Chevron gift card a while back and it has been traveling the world in the cup holder. Decided to finally put it to use. I kind of made an on the spot mental calculation of how much gas it will take to get to Arizona and added a few more gallons over that. Had my first travel fail at the Chevron. I left my stealth black Starbucks travel mug on the gas pump and drove away. I realized it as I was nearing the freeway. I thought about turning back but every intersection had big no u-turn signs and lots of traffic so I made an executive decision to abort the mission and abandon the mug in hostile territory. 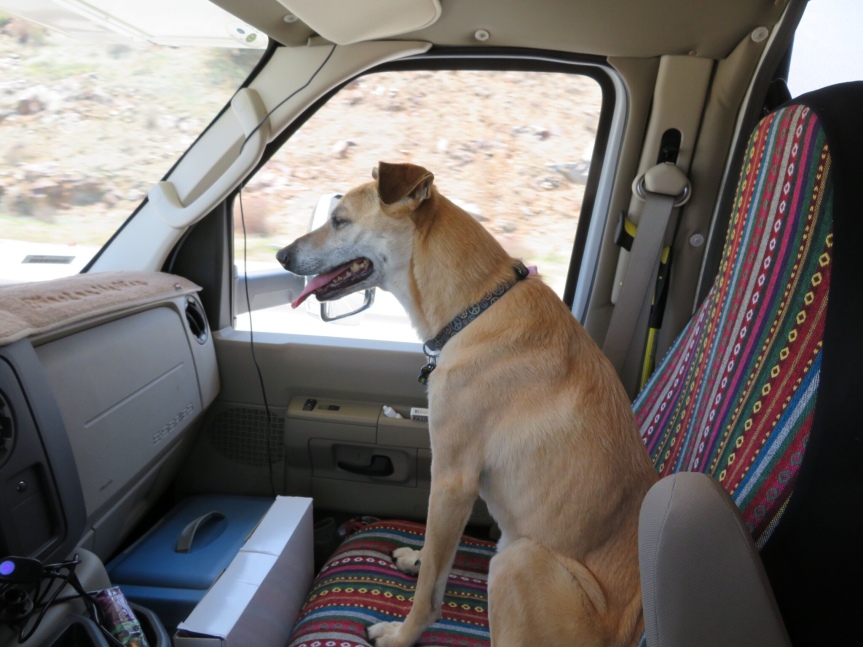 Wilson purred away and the traffic was within reason making for a comfortable commute getting out of town. Once on the 8 east of San Diego, it was cruise control and easy sailing. Not sure if my new steering stabilizer and sway bar are actually doing much but I’ll assess it more when the wind really kicks up. I called PJ and let her know I was under way. And after thinking of the sad way I’d left the mug to fend for itself, I called Dad to see if he would swing by the gas station and see if he could rescue it.

Cali was a stellar traveling companion. She took in the sights and occasionally napped in the back or lounged around in the bed between the cab seats. She would disappear and I was wondering if she was o.k. in the back. I couldn’t turn and look so I pointed the camera back there and took a picture. Sure enough, she was napping in her bed. We made three rest stops and she was excited to sniff around and explore the different facilities. My original plan was to overnight in Yuma but we both still had plenty of energy to keep going and after Cali gave me the go ahead, we opted to continue on until Dateland where we knew they had a cool place to lay our heads at the Oasis RV park. 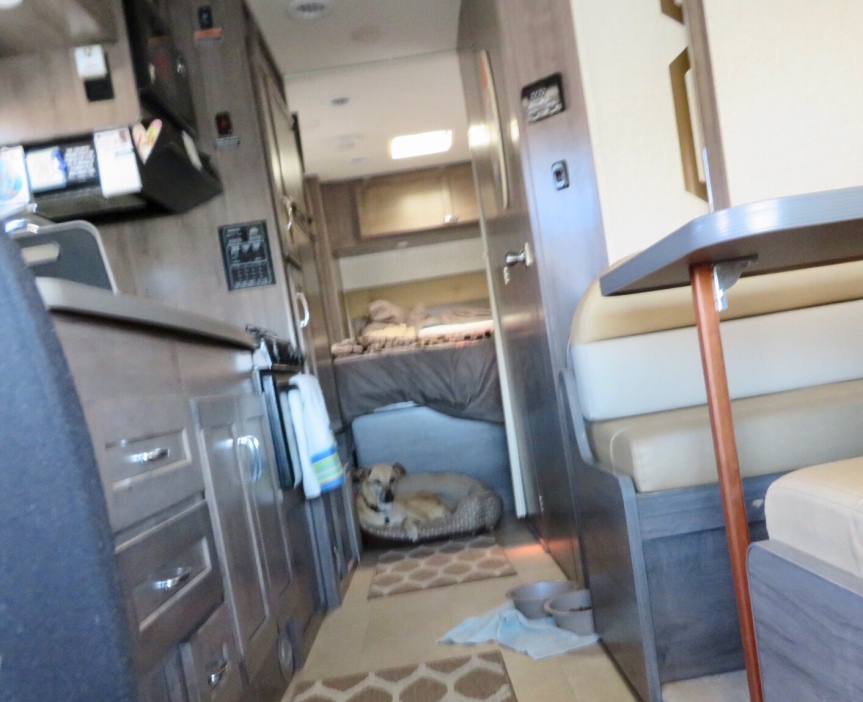 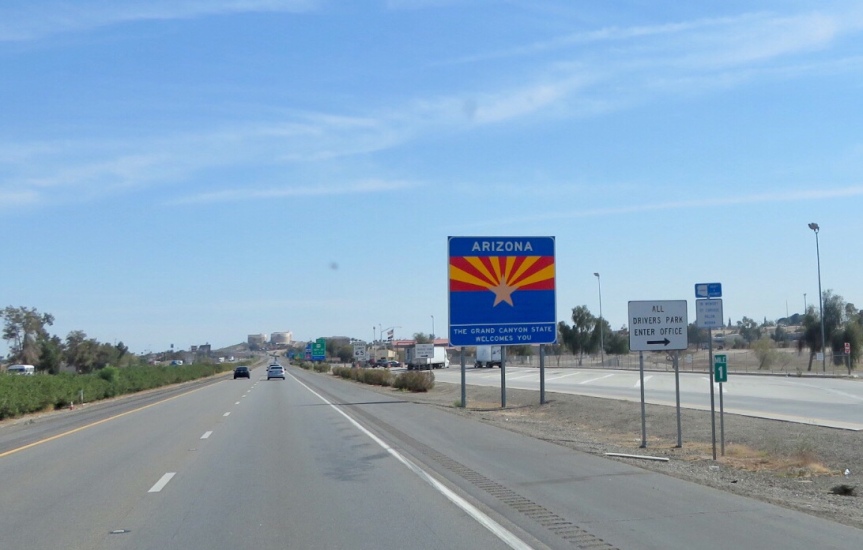 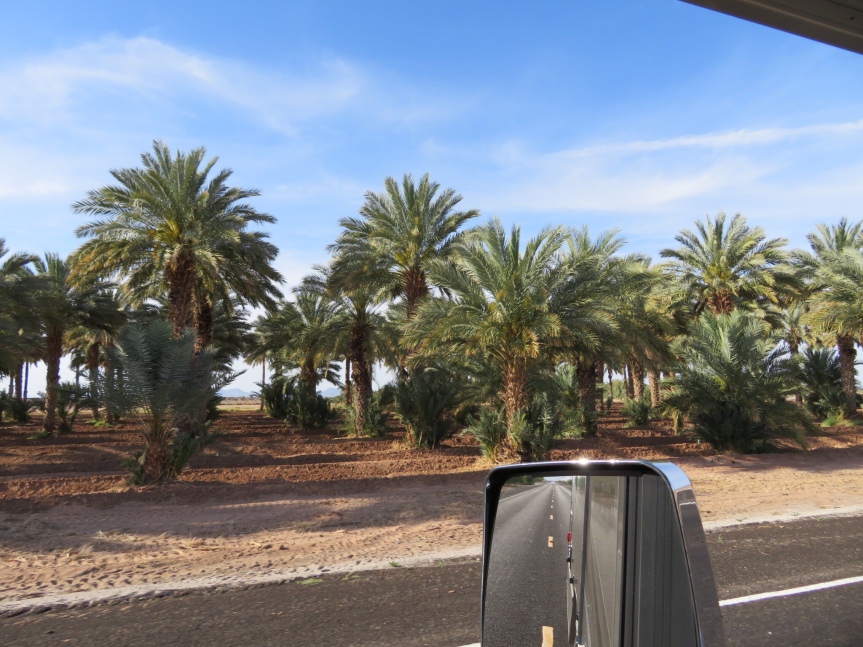 There were still a few holdover snowbirds who hadn’t yet flown the coop back to the frozen north but the place was mostly vacant and super mellow. Perfect for the likes of us two nomads. Last year when we stumbled upon the Oasis coming home from Mexico, we were the only ones here. We set up the rig and then I FaceTimed PJ and had a look around. Kicked on the A/C for Cali then rested up a little bit. 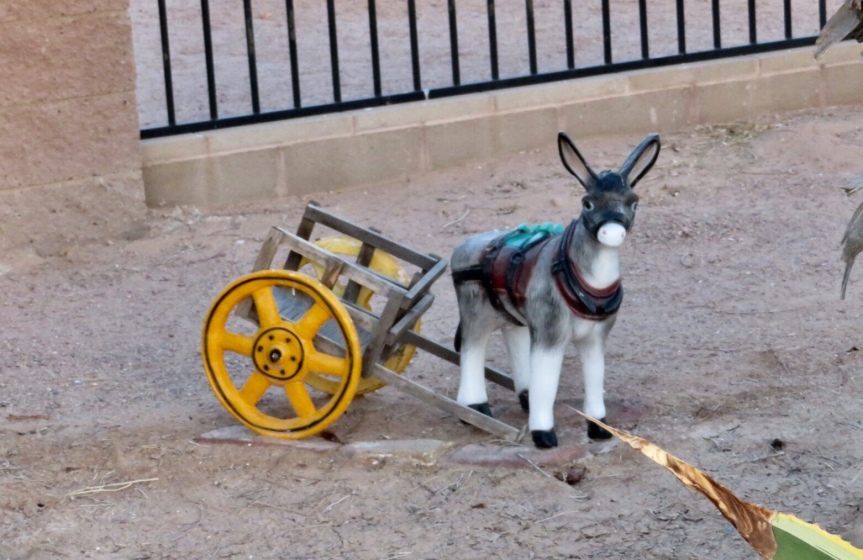 As evening neared, the temperatures dropped from the highs of around 90 to more comfortable temps. We took a hike out the back road and got in our exercise. Twenty minutes for the hip and with Cali’s leanness, we try to avoid burning too many calories so the distance was just about right. Right before sunset, I took advantage of the empty swimming pool and jumped in and cooled off and rinsed away some of the road weariness. The sun was setting in the distance as I made a couple of hot dogs and relaxed out on the porch and enjoyed the warm evening breeze. Jim, the owner, stopped by and we chatted for a few minutes. I moved inside, wrote a little and called it an early night.

When you leave boys alone, this is what’s for dinner