I woke up real early, even earlier than I thought seeing that I’d gained an hour during yesterday’s drive. I tried to get back to sleep, but settled for meditating and just lying quietly letting my mind be still. I didn’t want to take off too early and deal with traffic going through El Paso so I waited until ten but traffic was still tough getting through the city. Kind of scrappy little city sitting right on the border with Mexico. As I was passing through downtown, I glanced to my right and saw a bunch of colorfully painted houses and realized ‘hey, that’s Mexico across the street!’ 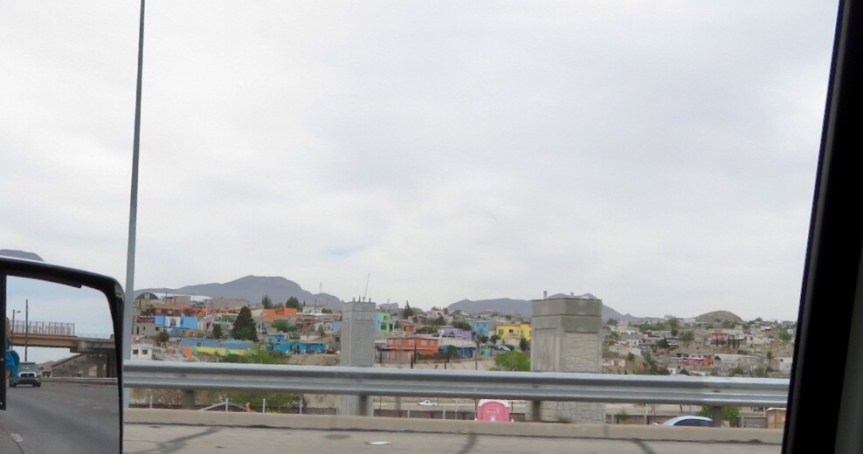 I picked a row of trucks to block for me and fell in with their convoy and we battled our way through the downtown traffic. It lasted about ten miles then things lightened up and it went back to being a two lane highway with moderate traffic. Cruise control at 65 and just sit back for six hours. We would stop pretty much hourly and walk around a little. Cali would lead me around and finally find that perfect bush to do her business. I’d get the leg a little stretch then we’d hop back in the rig and go some more. We hit rest stops, a gas station and just exiting off ramps to empty gravel pullouts lined with trash. As the day wore on, the wind came up strong. I hadn’t noticed it driving but when we stopped at an off ramp pull out, the door practically blew off when I opened it. Big props to the sway bar and steering stabilizer. I hardly noticed the wind when driving, so much nicer not having the white knuckle experience of getting moved around so much by the wind. 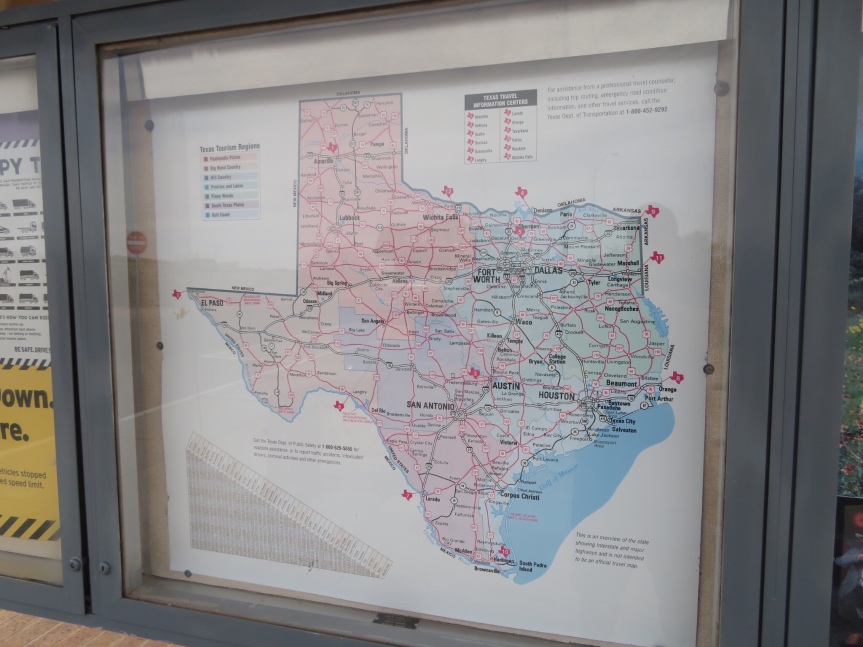 I plugged the phone into the radio and it has been cranking all of my iTunes by song titles from A to Z, so a wide mix of music with no rhyme or reason to genres. I can’t find the playlists, so just let it go. I have to fast forward the meditation tracks when they pop up before I go into a trance and drive off the road. Today’s drive covered titles from F through J. To amuse myself on the road, I play mental games by setting little milestones that I can tick off to feel like I’m making progress along the way. Get through El Paso, check. Reach Van Horn and stop at the Love’s service station for a fill up, done. Arrive at the intersection of I-10 and I-20, check. Get to Pecos, etc. It breaks up the drive and helps maintain the sanity. 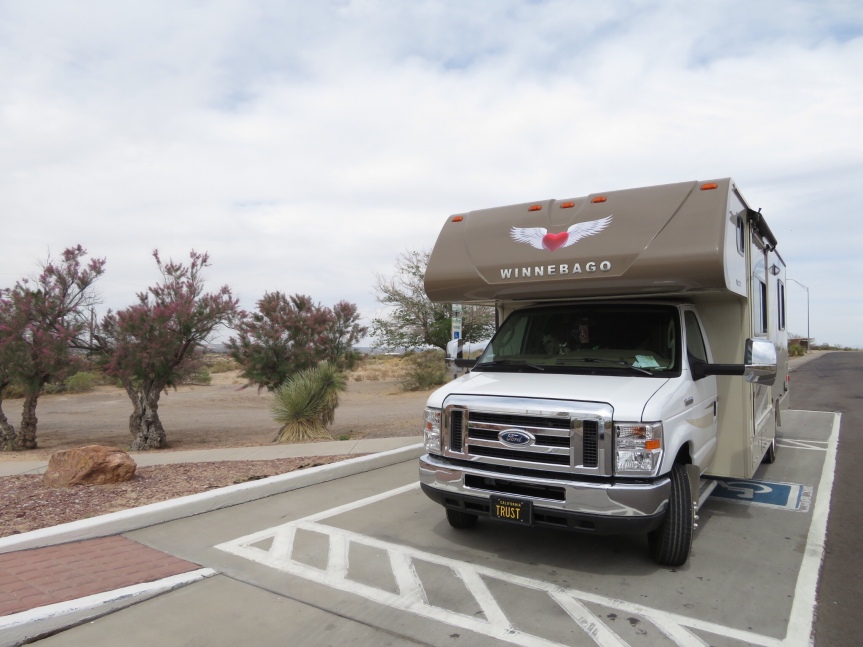 Out by Pecos, it is big time oil country with lots of rigs and the smell of unrefined petroleum permeates the air. The vehicles blowing by me that aren’t 18 wheelers are dually pick ups with compressors and various tools in the back. It must have been quitting time when I was passing through Pecos as I was swamped in a sea of oversized pick ups. I reached the exit for Monahans Sand Hill State Park just a few minutes before four.

I parked out in the lot and a young man with a clip board came hurrying over and checked me off his list. They were ready to head home but were waiting until I got there so I’d have my spot. Friendly, the Texas way. Joaquin set me up to pay at the self serve kiosk then hurried off to enjoy his weekend. Roma, the ranger who I’d called in the morning to save a spot, was getting in her car. I thanked her for setting me up and she warned me that we are in for some high winds for the night.

I drove through the park to the camping area and got Wilson set up in space #18, an excellent spot with lots of room between neighbors. A dune to the left completely separates me from that side. A retired couple from San Antonio stopped to chat. They are setting off on a month long loop around the southwest recreating a trip they’d done together as newlyweds. Cali and I hiked up in the dunes to have a look around then went in the RV for a little rest. We gained yet another hour today so we are on central time. I had a salad in the late afternoon then rallied at sunset and hiked up the big dune to the left to get a view of the sunset and the afterglow across the sand dunes. Lots of people were scattered around the high points of the dunes in little groups taking in the evening skies. 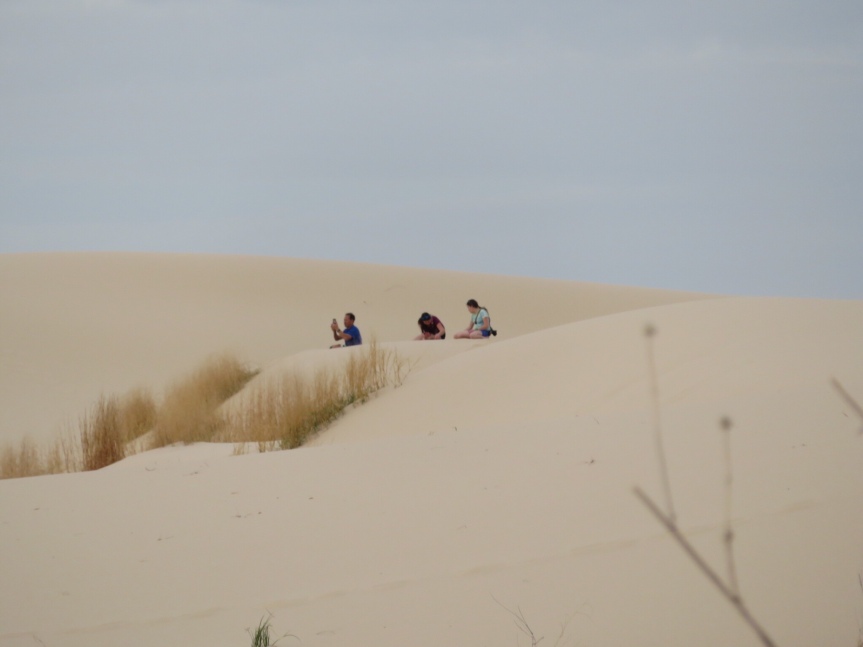 The wind had died down almost completely and I began to think that maybe the earlier winds were our 30 mile gusts and that we were off the hook for hard winds. Cali and I took a leisurely twilight walk around the camp loop checking out the bath house and locating the dump station as we explored our way over towards the day use section. We came back around to camp and hung out inside. I was in bed and writing in the journal at around ten when suddenly mad gusts of wind started rocking the RV. Not a gradual increase warming up to gale force, just instantaneous howling wind. Good thing Roma told me I’d survive or I’d be getting a little nervous. Anyway, another long day driving. I’m booked here two nights so tomorrow’s dedicated to lounging and getting back on track with the physical therapy. Internet is spotty. Sometimes 1x, sometimes LTE. PJ and I kept getting dropped on our phone call. Managed to load these pictures up, but super slow upload time. Maybe climb a dune next time! 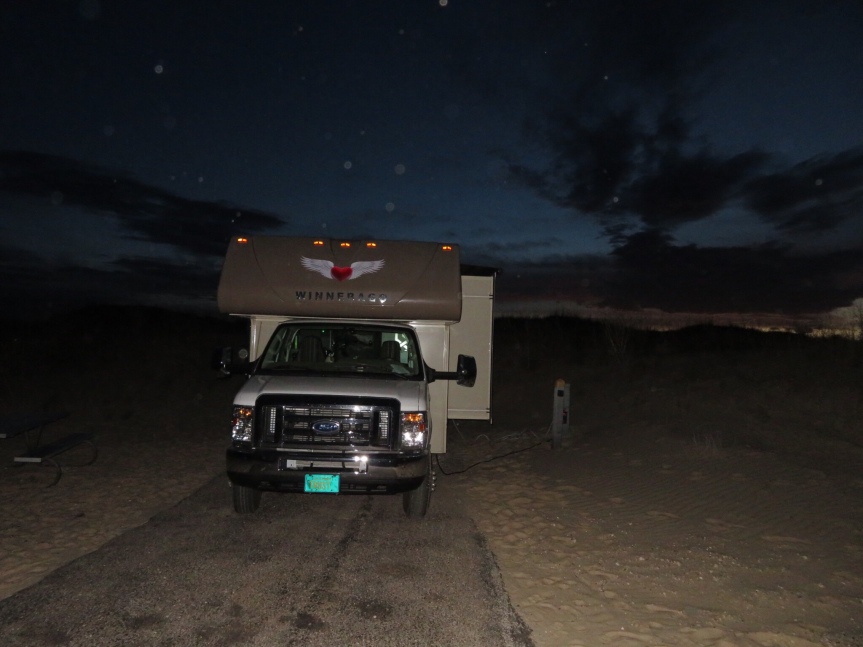