I had a rough sleep but I was up before the alarm walking Cali around the yard. My original plan was to hit an early AA meeting then meet up with Joe to go for an excursion to hike a trail in Appalachia. Since Cali still hadn’t been able to go to the bathroom, I didn’t want to leave her alone in the RV. I spoke with Joe and he suggested loading Cali’s bed in his truck and just head off to the Daniel Boone National Forest instead. So, off we went. Cali was a little skeptical at first but after our first stop after going through the rugged tunnel carved through the mountainside, she was all in for the adventure. We drove up through a little holler near the Red River Gorge and drove through the tunnel then let Cali off leash for a run in the parking lot at the trailhead. 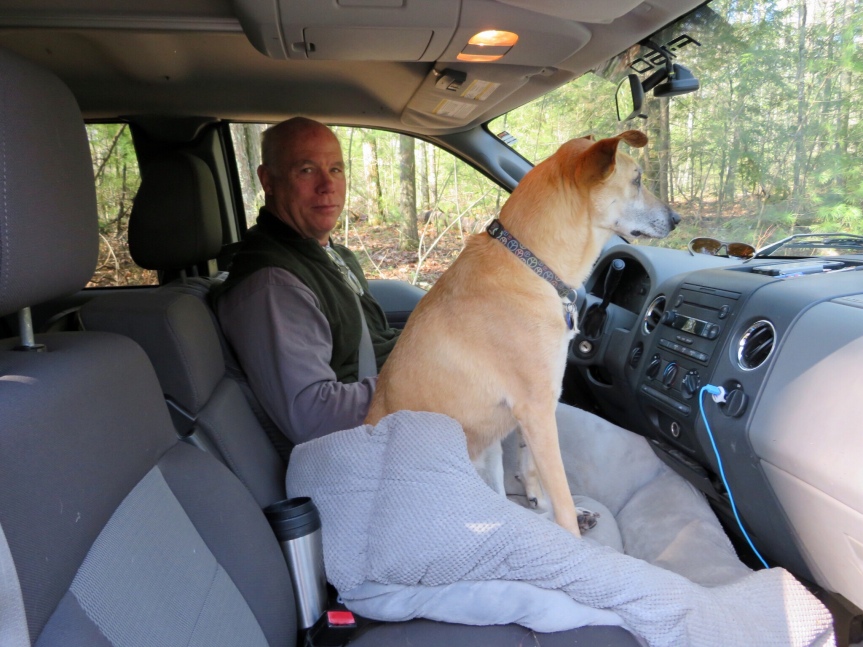 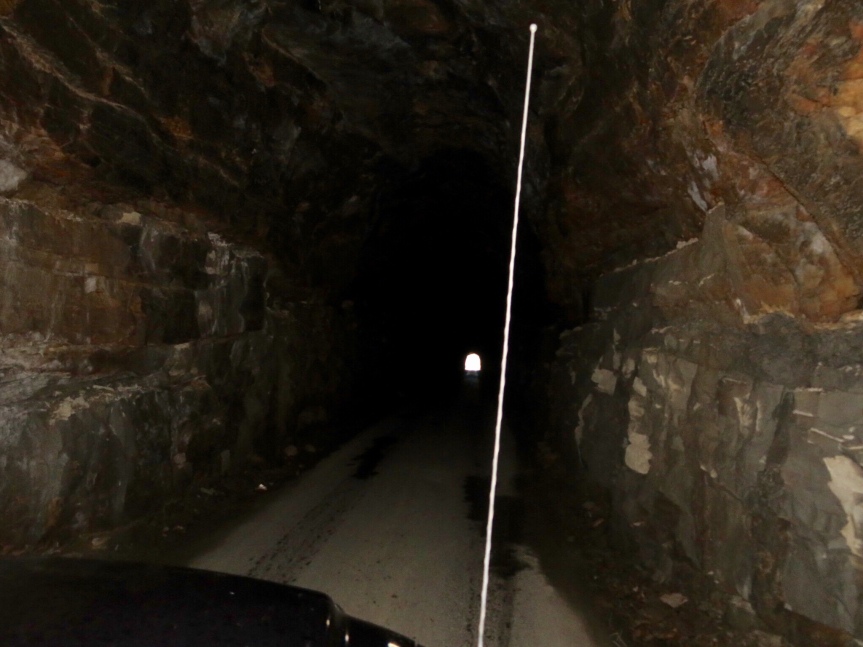 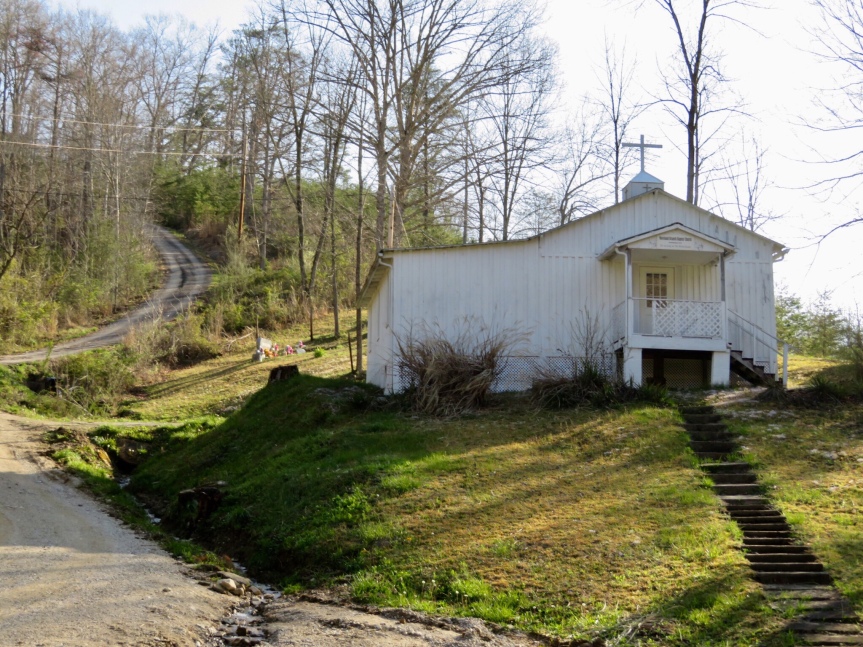 From there, we drove a little deeper into the forest and parked at a trailhead in the Daniel Boone Forest and got out and went for a hike through the forest. Most of the deciduous trees still haven’t leafed out yet, but there are tons of evergreens in this area so it was a beautiful hike. The morning had started off in the low thirties, but the sun was shining and the temperatures rose quickly as the morning wore on. I apologize if it’s TMI, but it’s important to me – Cali finally got comfortable enough to do her business on the trail about half way in. It was a struggle, but it was a success. I felt like our team had scored a touchdown. After 3 days and an extensive vet visit she is looking to be on the mend. She had some pep in her step and was looking pretty lively for the rest of the hike. 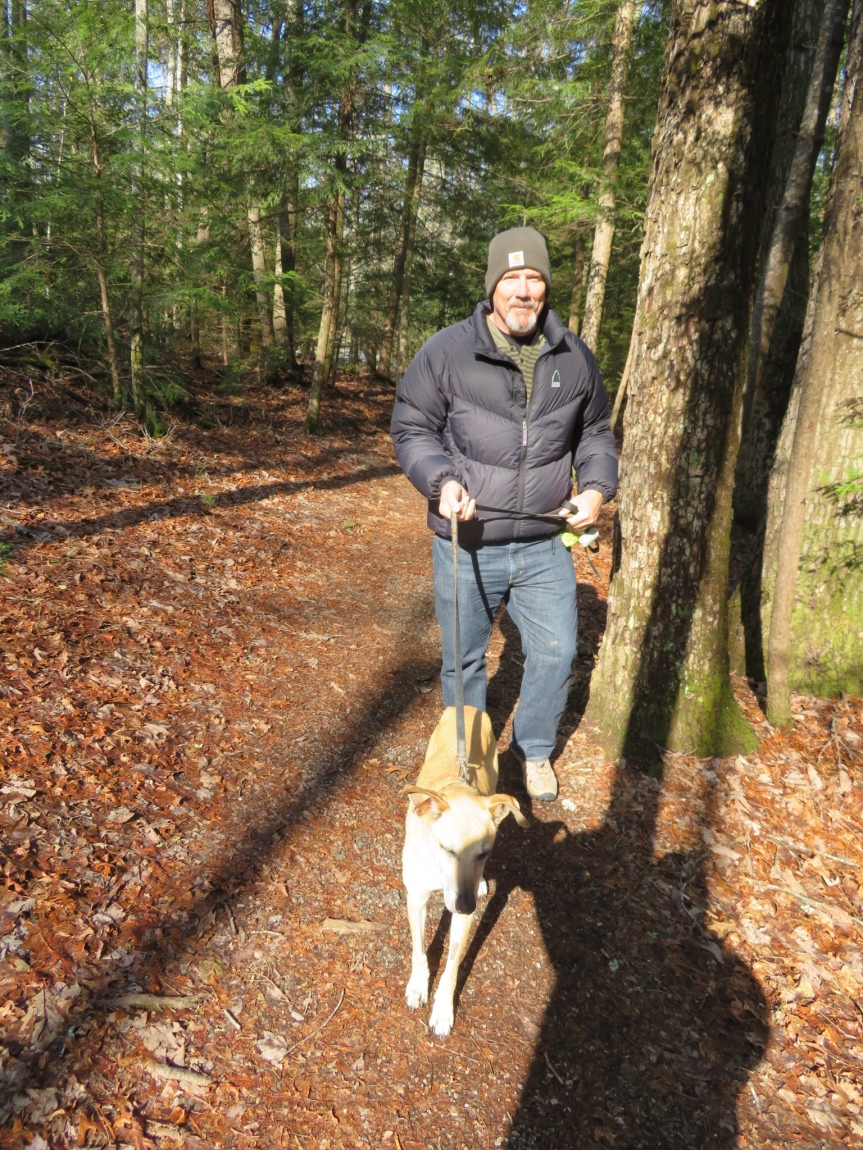 The sun was warming my bones as we reached an overlook along the trail. We enjoyed the view and took a few pictures. From that point on, the trail dropped steeply down a rocky slope, probably too much for the still recovering hip. We walked back out and Joe had brought some leftover pizza which we munched cold on the roadside. Joe is Cali’s new best friend. She follows him around and I think she was trying to find a way to hide out and miss the bus when it was time to leave town. It was an excellent morning, enjoying nature and seeing the culture of the people who have lived in these parts forever.

We drove back to Joe’s and I organized the rig and got everything squared away. Joe filled the fridge with containers of chicken soup and the beautiful brown and speckled eggs he had gotten from the horse breeders. Thanks so much for the hospitality and enjoyable visit. Cali and I both agree that Lisa is a keeper. You guys are awesome. Had a great time seeing how the Kentucky half lives. I punched in Beech Fork State Park on Google maps and we headed on to West Virginia. 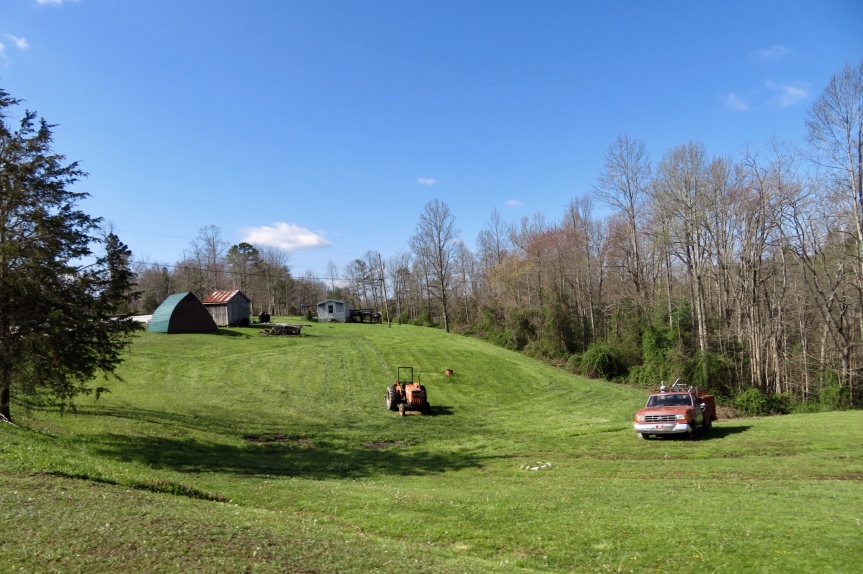 About an hour into the ride, I started getting the visual cues of a migraine headache. There didn’t seem to be any decent places to exit so I powered on hoping for a rest area. It was getting a little funky but I was doing okay. Prayers answered, there was a rest area about 20 minutes down the road. I pulled off and slid the RV into a long pull through parking spot between two semis then climbed in the back and laid down for 40 minutes. Napped a little, then got up and walked Cali around the grassy area then feeling a little better, we continued on down the road wrestling against the strong winds. 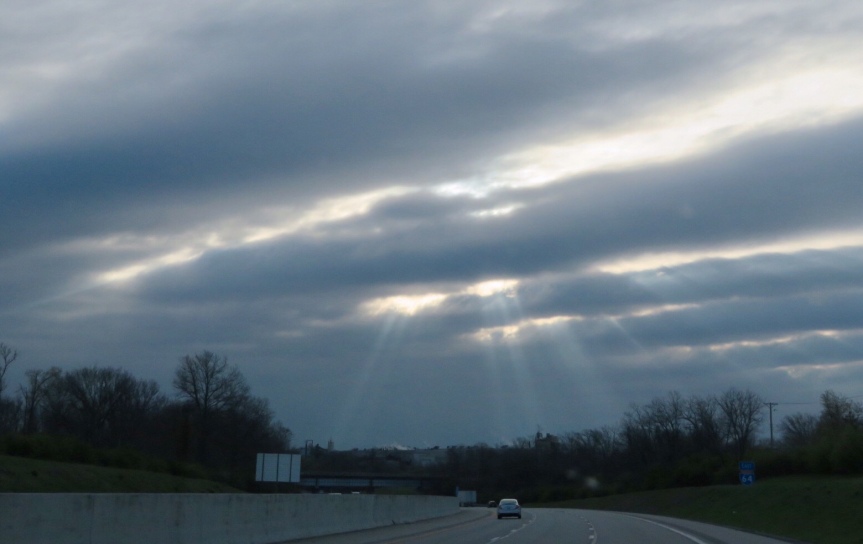 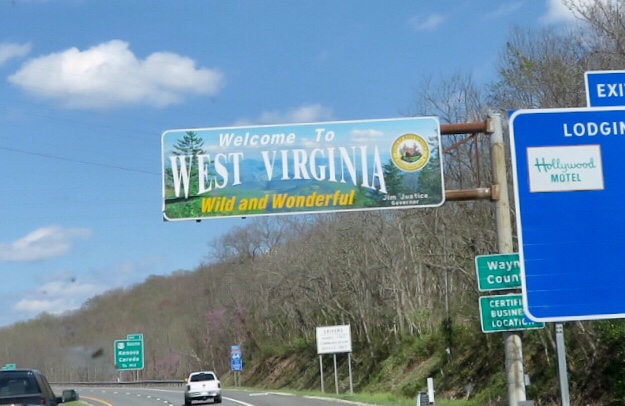 The exit for Beech Fork took me through narrow winding little roads with lots of traffic. I was holding people back but there was nothing to do about it. Passed some nice houses then rolled through a holler of sketchy dilapidated trailers all grouped up like circled wagons. Joe’s deliverance like takes of the insular communities had me a little skeeved out. A few miles later I reached the park about 13 miles in from the highway. I signed in for a lakeside site and got the motorhome situated. There are maybe a dozen other campers already set up. Some looking pretty long term. No phone service out here. Tried to text PJ. Looks like one went through but it swirled around forever. 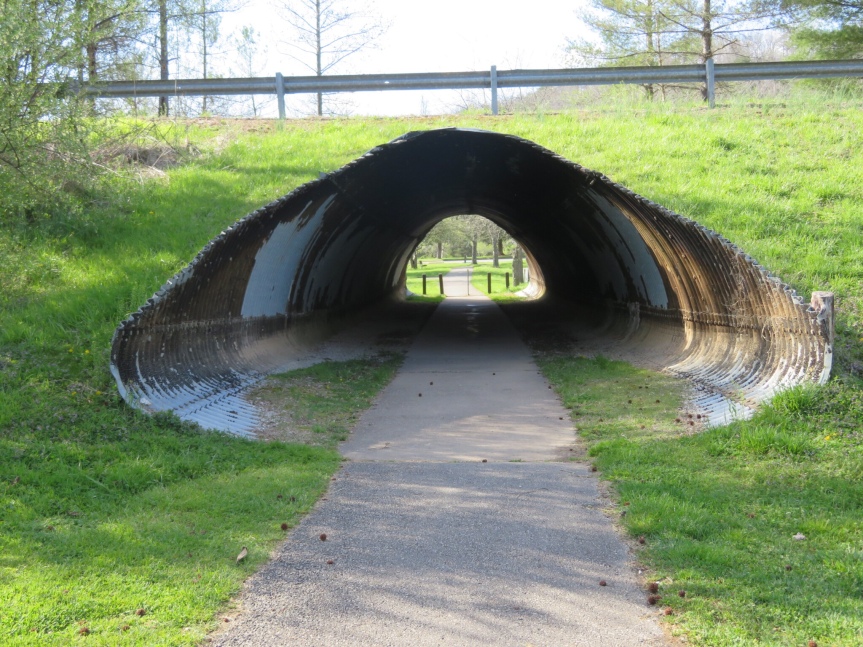 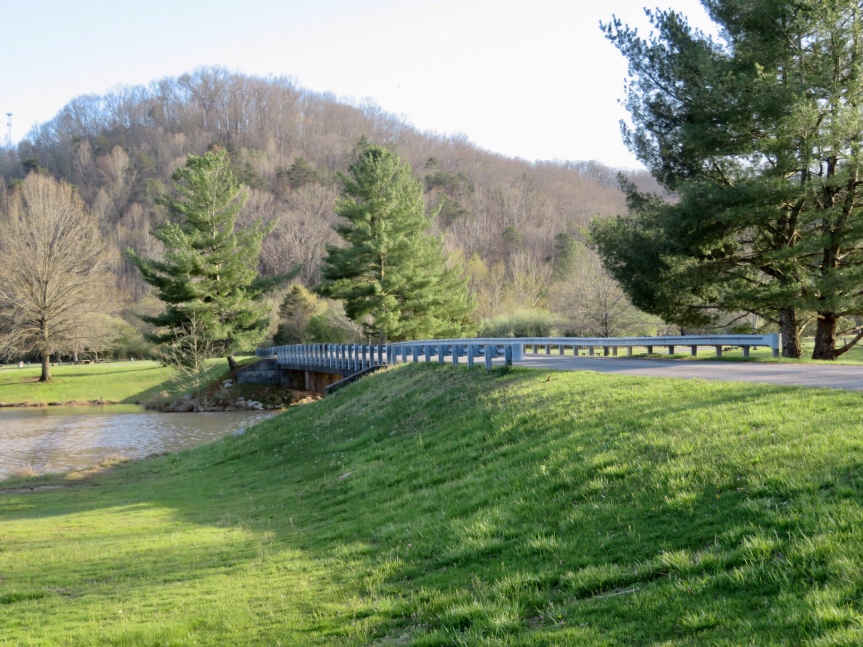 Leashed up Cali and we went out exploring around the area. Started doing a mile long loop around the recreation area but the recent rains had parts of the path flooded. We turned back and went for a walk over in the half of the campground that is still closed for the season. Lake is looking muddy from the rains but the geese seem unfazed by a little chocolate water. Lots of colorful birds; cardinals, bluebirds and red winged blackbirds. Came back to Wilson and hung out doing the books then making us both dinner. Went for a sunset stroll before closing ourselves in for the night. As the sun got low, the temperatures dropped quickly. I was getting stressed about not being able to contact PJ to let her know what’s up. When I went to download pictures I realized that the campground has internet so I was able to FaceTime and wish her a happy birthday. Got comfortable and typed up a little post. 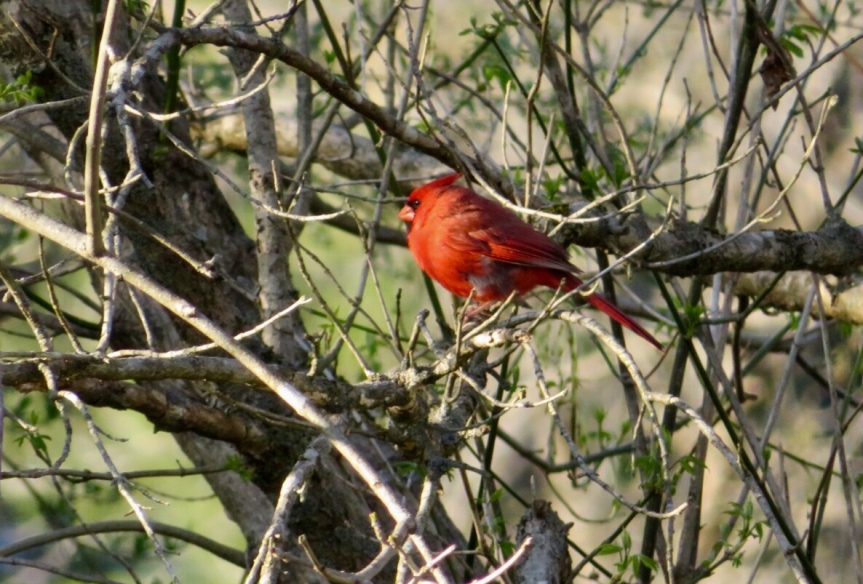 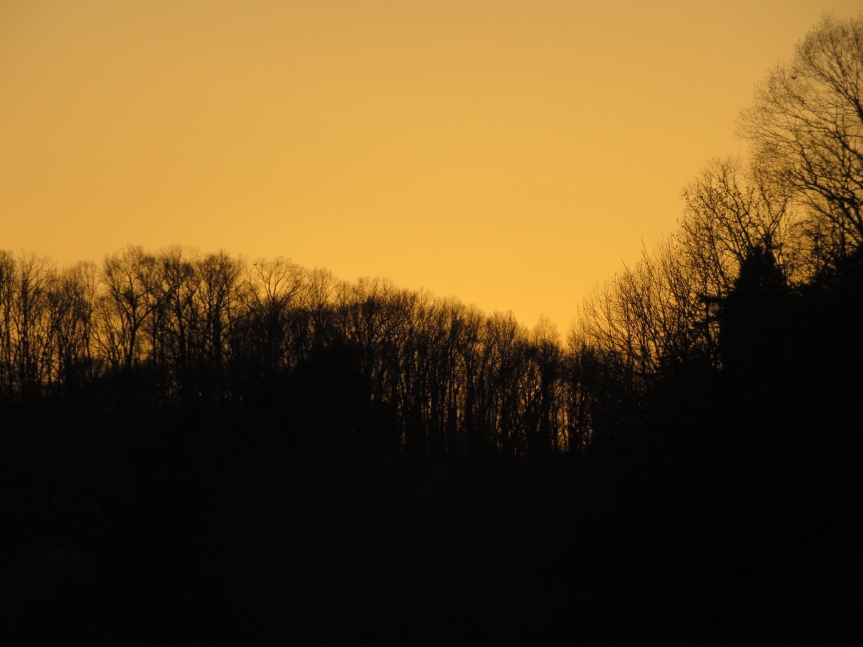