Today, we had to shift camps away from our sweet waterfront spot that Brittany was thoughtful enough to change for us over to our original site near the camp entrance. Not that it’s a bad spot, every site here at Fort DeSoto is large and deep, surrounded by trees. When I made the reservation, this was the only site left in the whole campground. There is another loop further into the bay, but it is dog free. We decamped at then11:00 o’clock check out and slid into site 88. We got set up and hung around a while PJ journaling and me just generally loafing. We were a bit low energy so we decided a bike ride was necessary in order to lift our spirits. 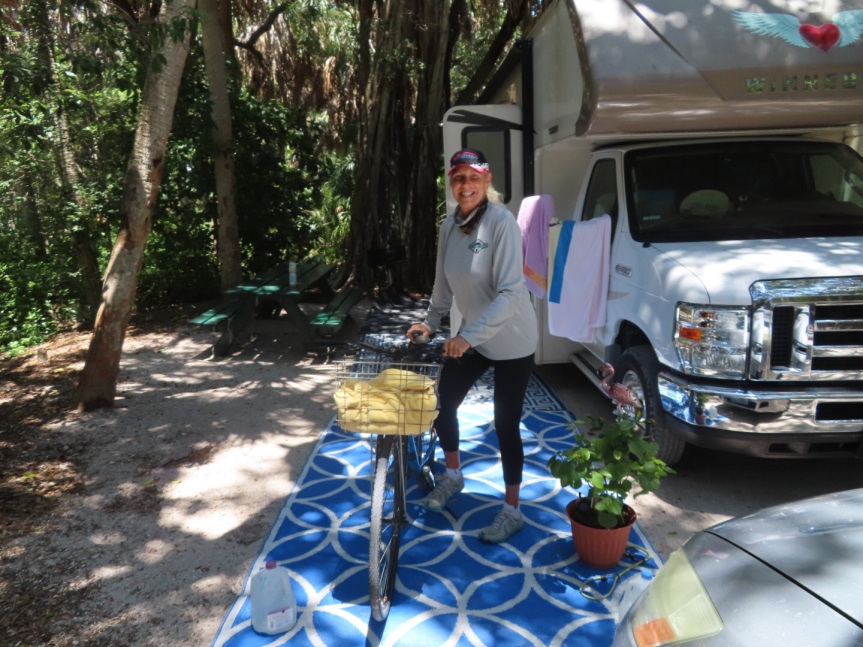 We made electrolyte drinks and suited up, heading out the nice bike path into the beach area of the park. We first went left towards the east until the road ended then hammered hard all of the way to the western end of the Key where we turned around and powered back for another lap of Fort DeSoto Park. We pounded the pedals for an hour as hard as we could shaking off any lethargy and demons that might have been tailing us. 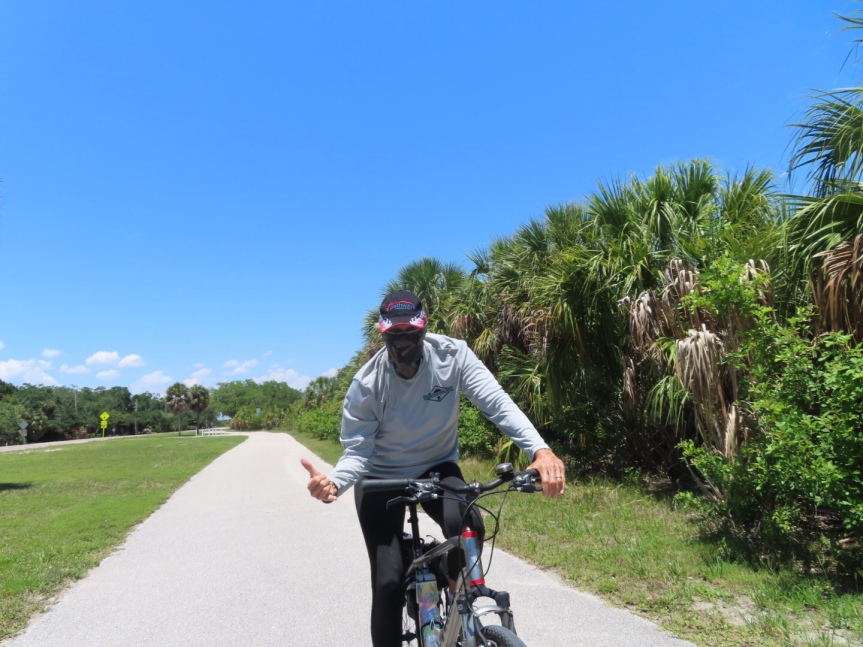 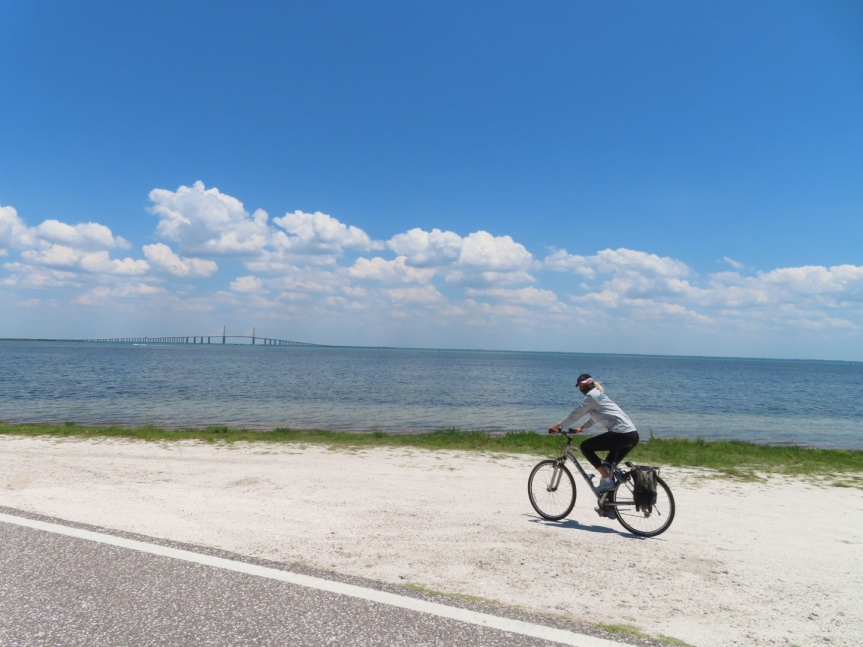 We finished at the fort and parked over at the pier. We grabbed some beverages at the bait shack and sipped them outside while wandering out onto the pier. Looking over the edge at the beach area, PJ spotted a group of girls wading waist deep taking pictures of a manatee that was lounging in the shallow water next to them. She got excited and ran over and waded,out with them to see the manatee close up. I was still cooling down from keeping up with Pea so I stayed on the pier and took pictures. After a while I threw on my trunks and joined them. Manatees are magical beasts. It’s so fun to spot them and to see them up close. 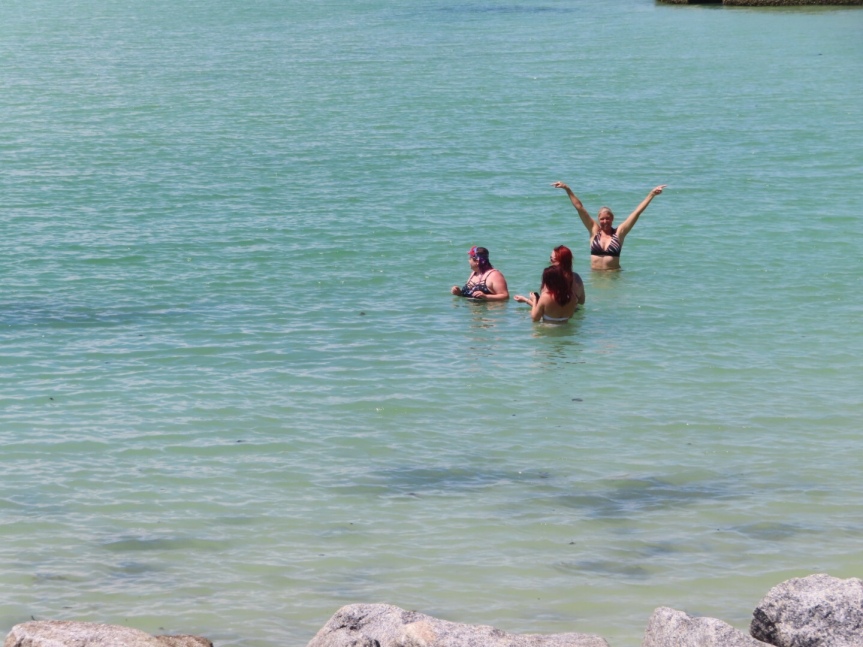 When the manatee moved along we walked out on the pier to see what was going on. Plenty of fishing as always and a smattering of tourists like us, while none quite like us, were enjoying the sunny afternoon. More manatees were passing by going underneath the pier to relax in the beach area where we had seen the other causing a stir amongst the non-resident population walking the pier. We raced from side to side with a couple of bird watching type seniors with cameras sporting ginormous lenses. It was fun. The pier was hot on my feet, but not so much that I was willing to put my shoes back on. 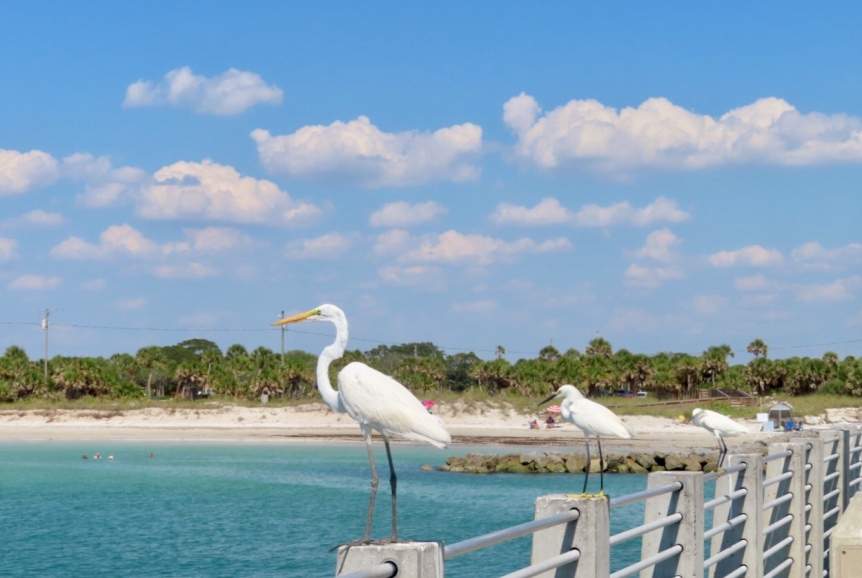 Out at the end of the pier, giant schools of baitfish were roiling up the water below. Birds were going crazy and the dolphins were coming in to feast. Fishermen on boats would idle up to the pier and throw hand nets out to fill their bait tanks. There was friendly banter going on between them and some of the people on the pier. The activity of the frenzied fish had everyone in an excited state. The dolphins would wait for the throw nets and try to rob the fishermen of their bait before they could get it on board. One guy was having a tug of war with the dolphin for his net. It was an amazing afternoon. We went for another swim then it was time to get back and release the hound. 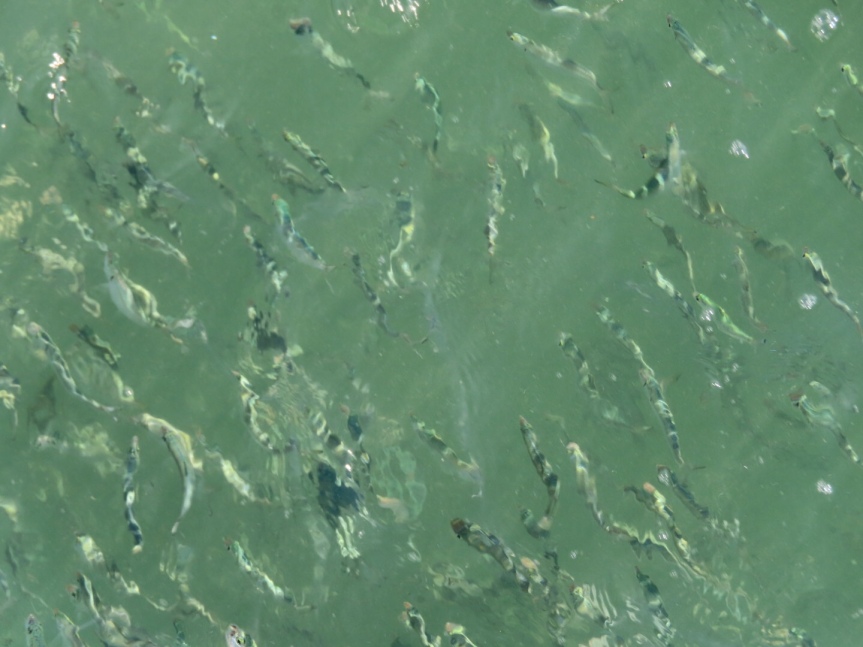 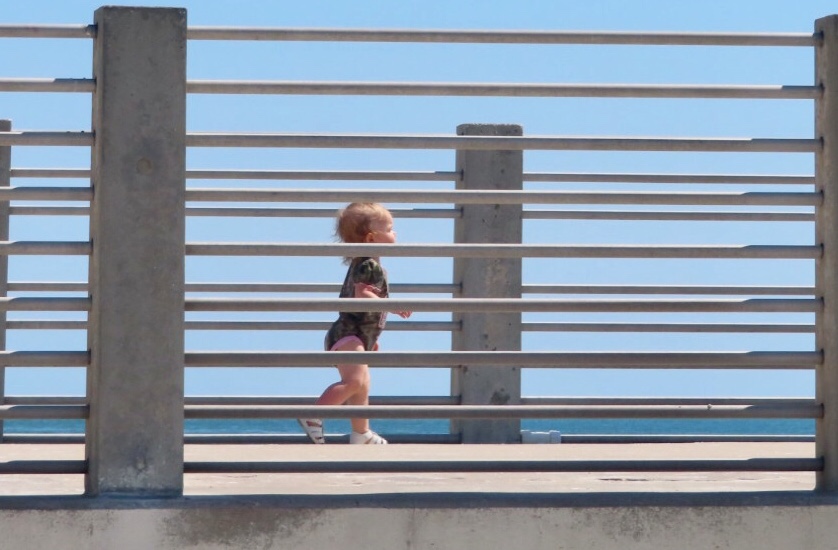 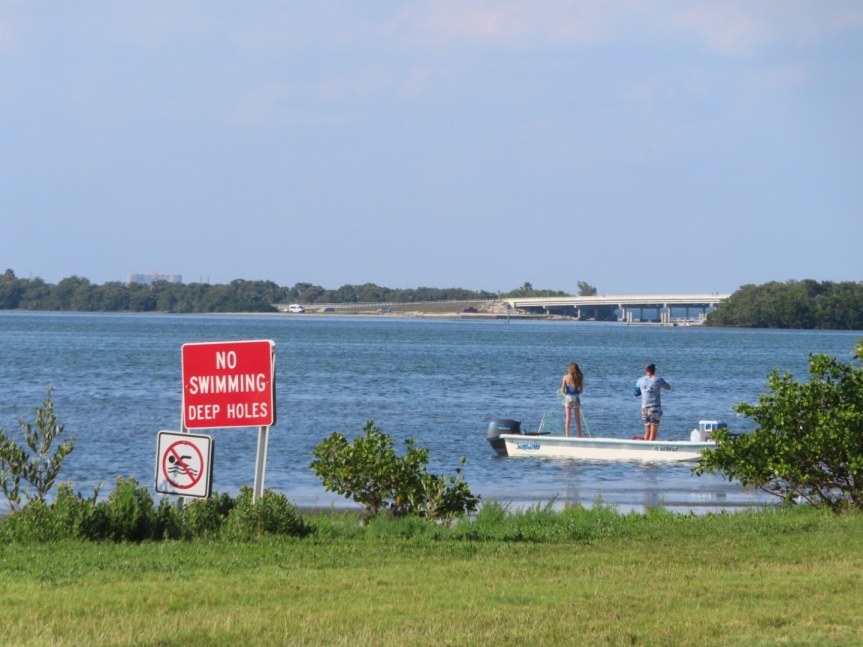 We ate some spinach salads then packed away the boards and bikes before returning to the beach to catch another awe inspiring gulf sunset. We strolled along the sand to the north beach combing and bird watching. I managed to find two more small shark teeth and PJ found some shells and also filled a small bag with cigarette butts and other trash. Soon the golden sun was melting into the green water of the gulf. We stood and watched it disappear then walked back to the boardwalk that brings us over the sand. The ospreys were feeding their babies up in their nest, the moon was rising fast over the eastern dunes and a few tourists were left feeling the peace in the sunset’s afterglow. Moments later we could see the ranger in his truck with the flashing lights coming to give us all the heave ho. A wonderful way to finish our last evening at Fort DeSoto. 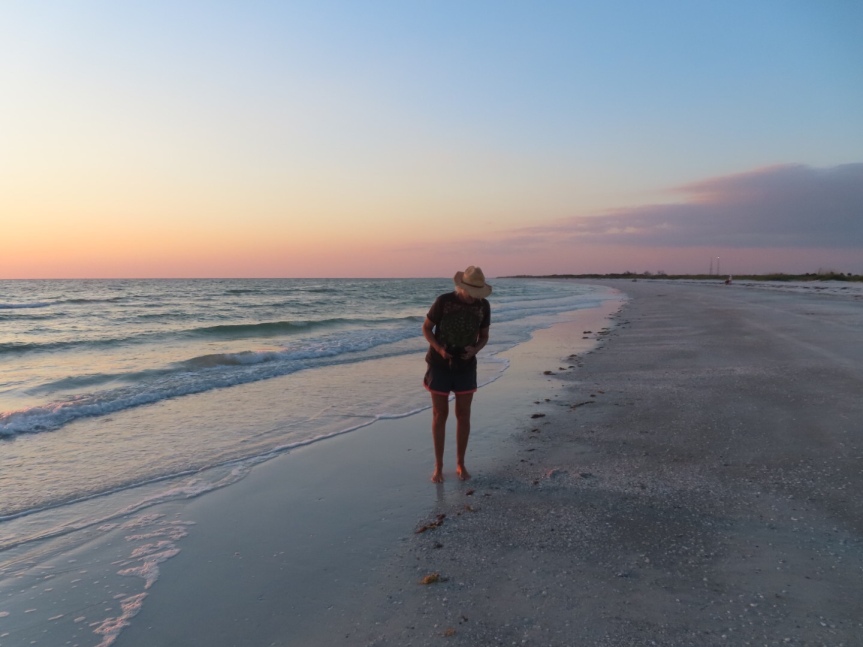 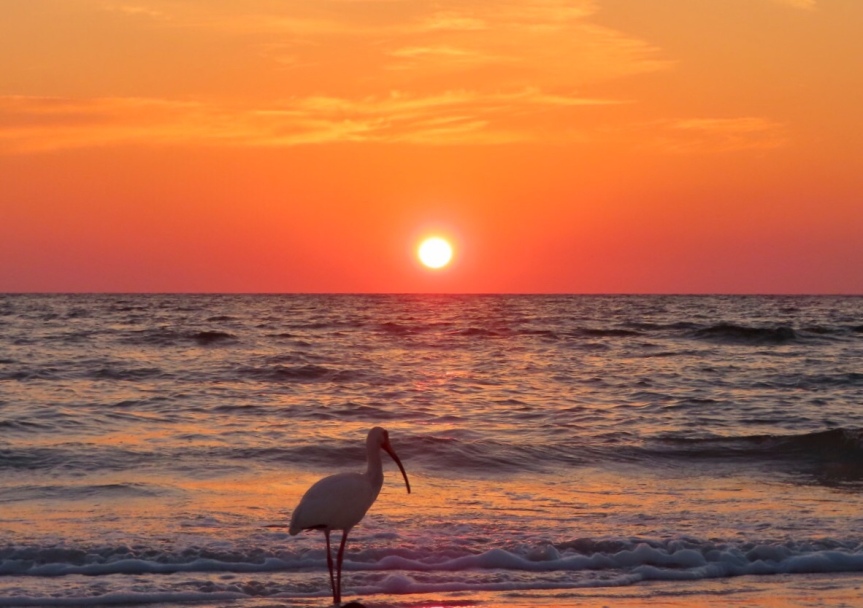 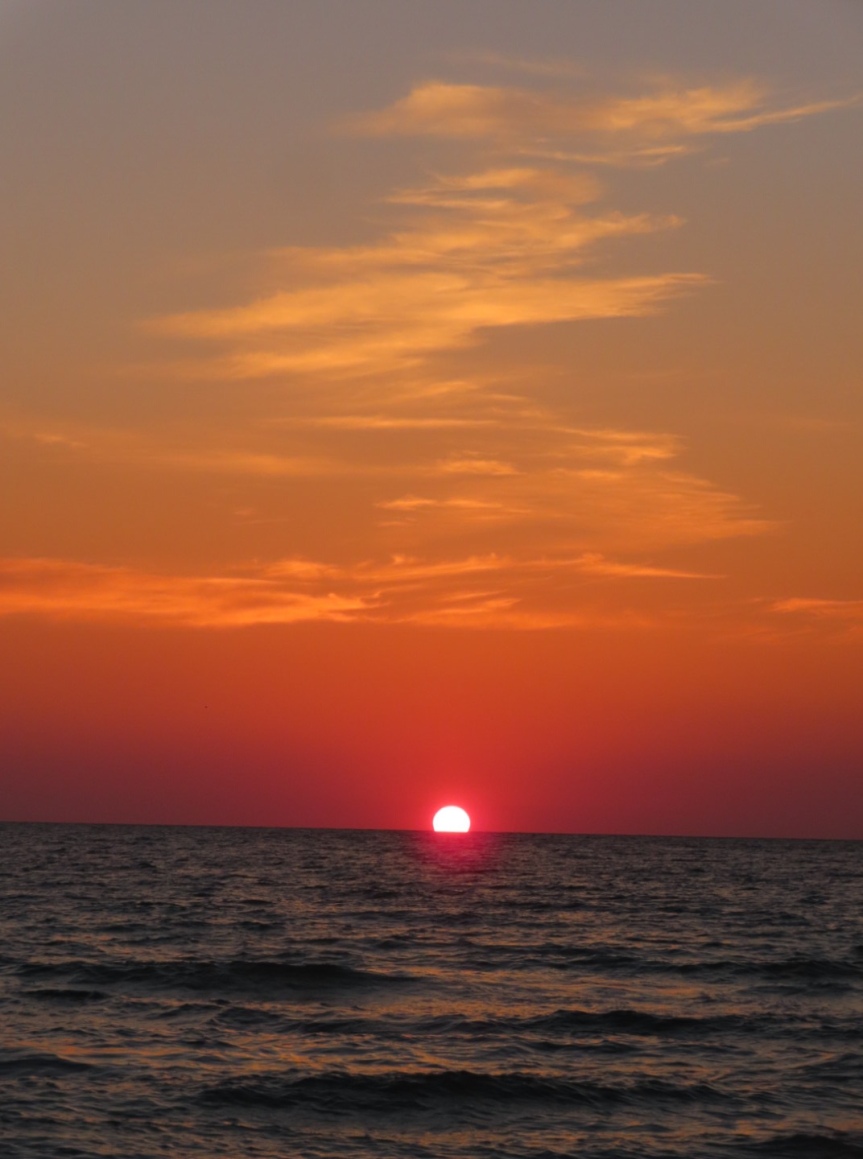 One thought on “Prowling the Pier and Pedaling the Paths”