The water view was nice with calm sounding ripples and the calls of different birds floating across the bay. It was a good morning to rest quietly on the porch doing our daily readings and getting in some prayer and meditation. After breakfast, PJ had some calls to make so I saddled up the Trek and pedaled off to see what Fort DeSoto had to offer. They have a designated bike path that goes all the way to the fort and the gulf beaches to the west. 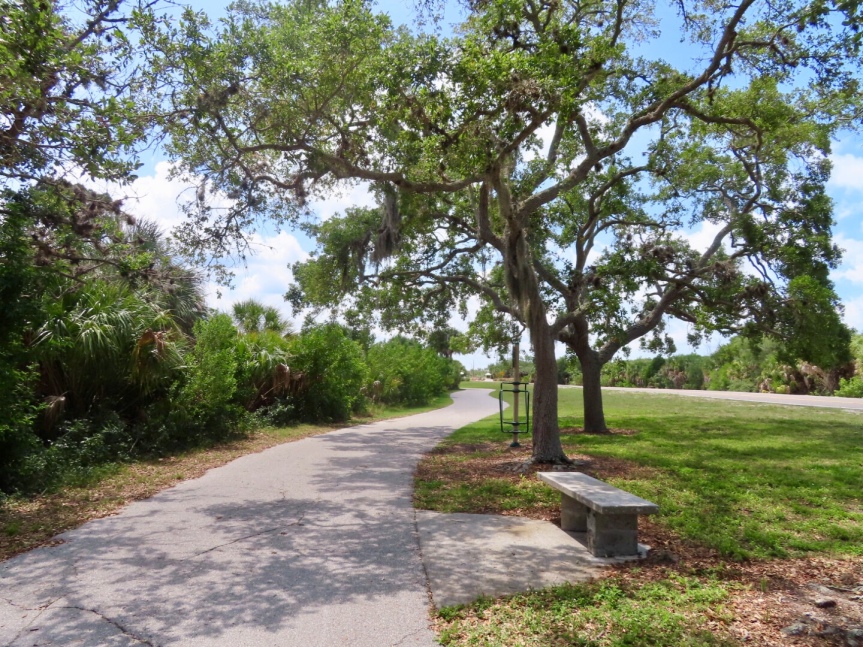 There is a shorter pier on the bay side where fishermen tie up and the ferry to some nearby islets departs from. I had great views of the bay towards Tampa and across to the west where dogs were running free at the set aside area of Dog Beach. There were several people fishing off of the pier gigging their poles up and down hoping to snag some of the fish below. It was a beautiful day and the birds were hovering about hoping to grab a quick snack. 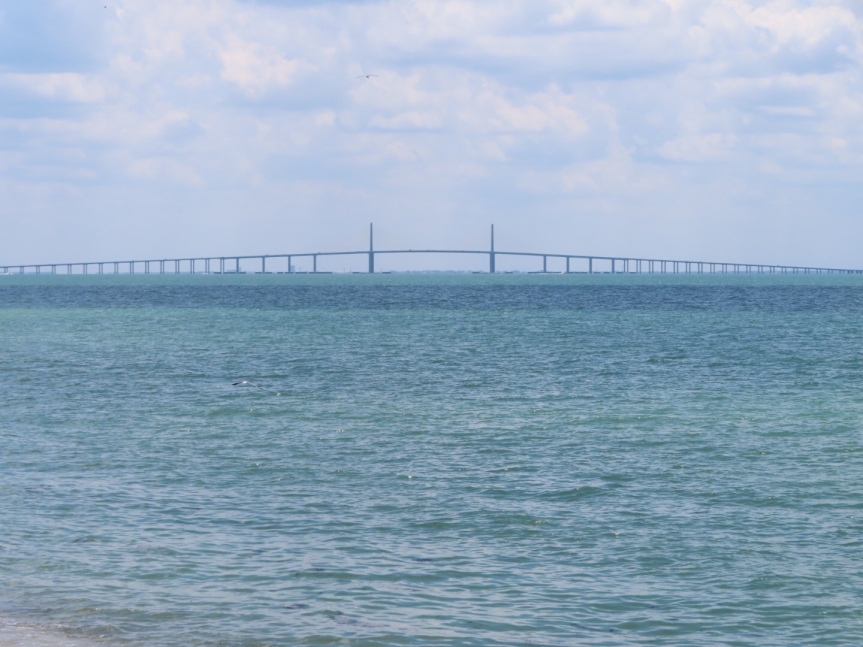 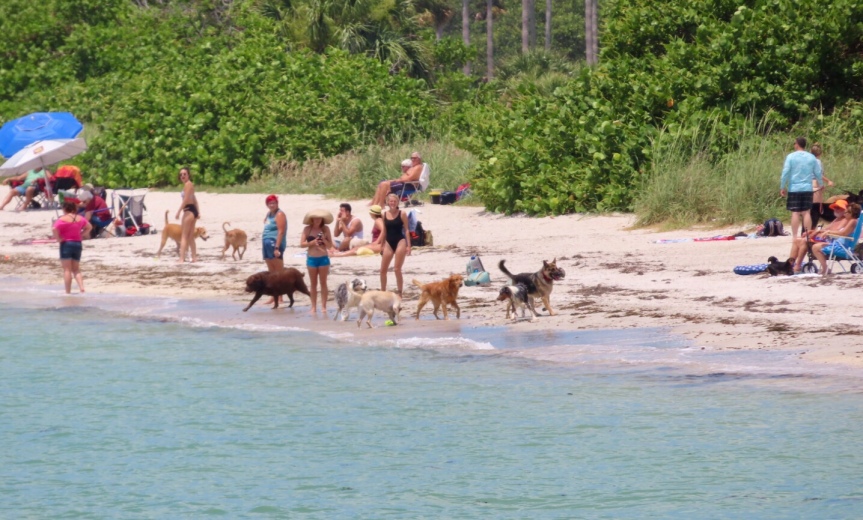 The fort was a short ride away and featured old cannons and empty concrete bunkers where the men were stationed. It was erected during the Spanish-American War in 1898 to ease the worries of the residents in Tampa. There was a lookout on the top that had views over the gulf and the fishing pier on that side. The calm waters attracted a lot of tourists and locals who were fishing, swimming and lounging in the sun.

Kayak launch across the road at the estuary 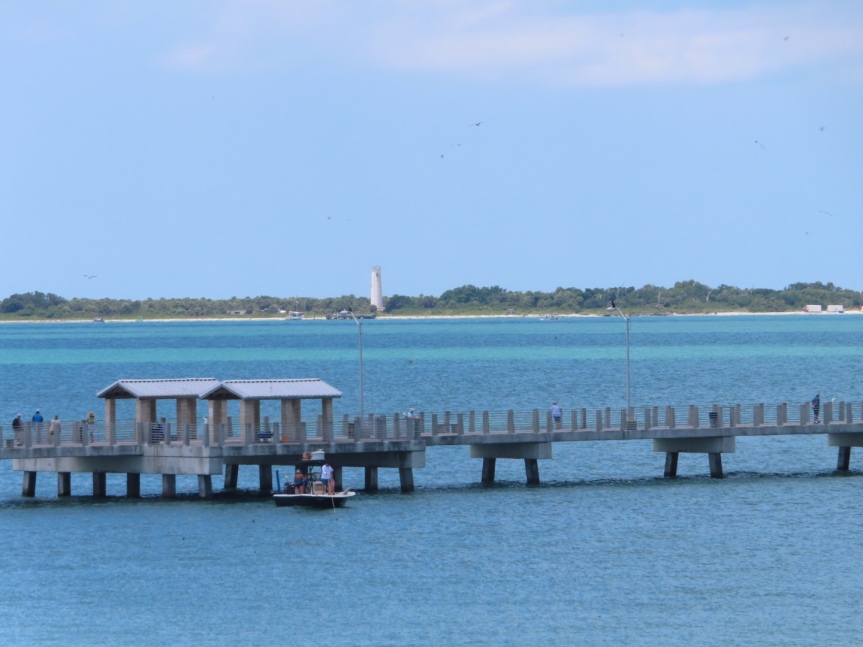 I cruised over to the beach and had a nice swim in the warm, clear gulf waters. A fisherman had waded out near me and his wife began calling out to him that there was a manatee directly in front of us. There she was, a big ole sea cow, not twenty feet away. I stood still and watched as she slowly moseyed by. I dried off on the sand and watched all of the activity up and the down the strand. 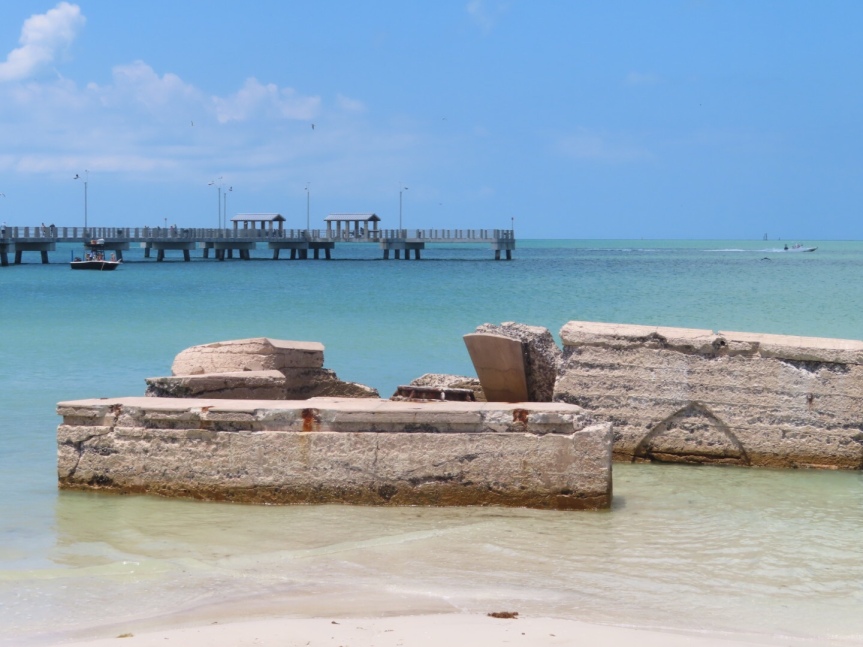 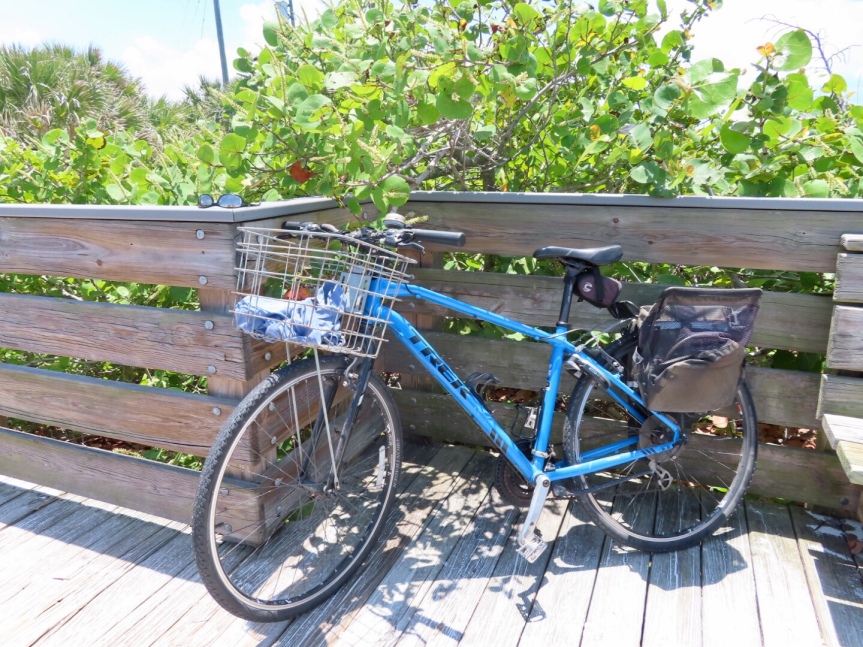 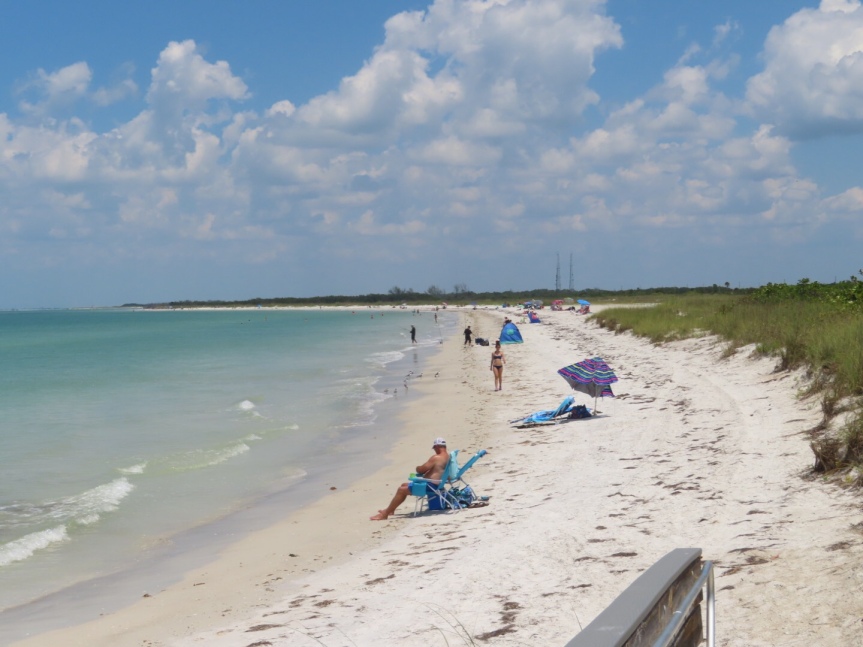 There was a little shop by the pier where I bought a soda and sat under a palapa and cooled off for a few minutes before walking out on the pier. The fishing here seemed better as I noticed quite a few anglers actually had some fish in their buckets. The dolphins really like the pier area and there were lots of them cruising around beating the fishermen to the schools of mackerel that seem to be the dominant species in the nearshore waters. 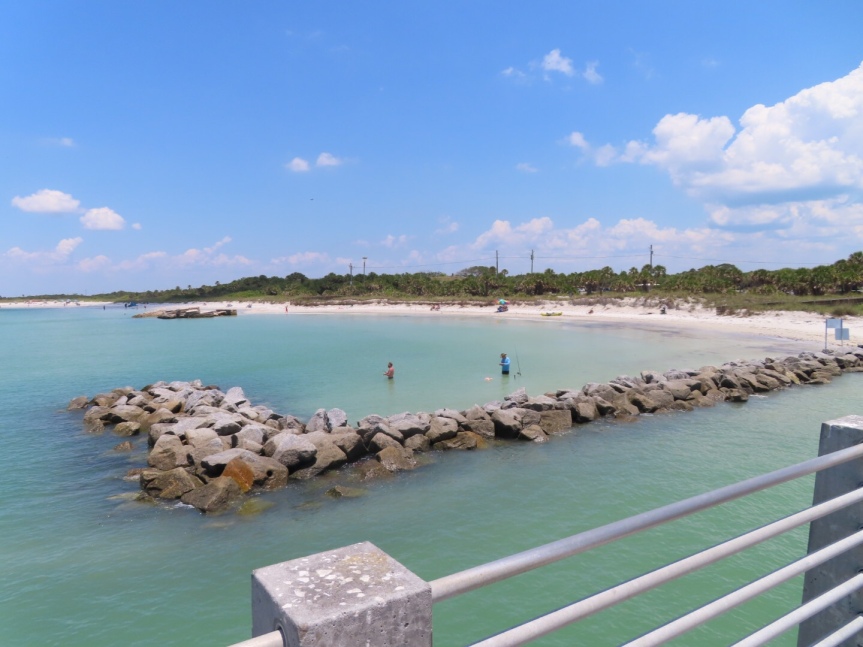 I headed back to camp and rested in the shade talking with PJ and hanging with the pup. We headed to the local market in the late afternoon and picked up a few staples to keep us going for the next couple of days. Mainly the prisoners fare – bread and water. After dropping it off at the RV, we packed up a tuna sandwich picnic and drove over to the beach to watch the sunset. Lots of people were out for the evening, some taking wedding pictures and a pregnant lady taking portraits of her baby in vivo. We walked down the beach PJ filling her hat with spiral shaped shells while I just poked around the wrack line seeing what was there. And there it was, a shark tooth! Especially cool because I never expected to find one here. 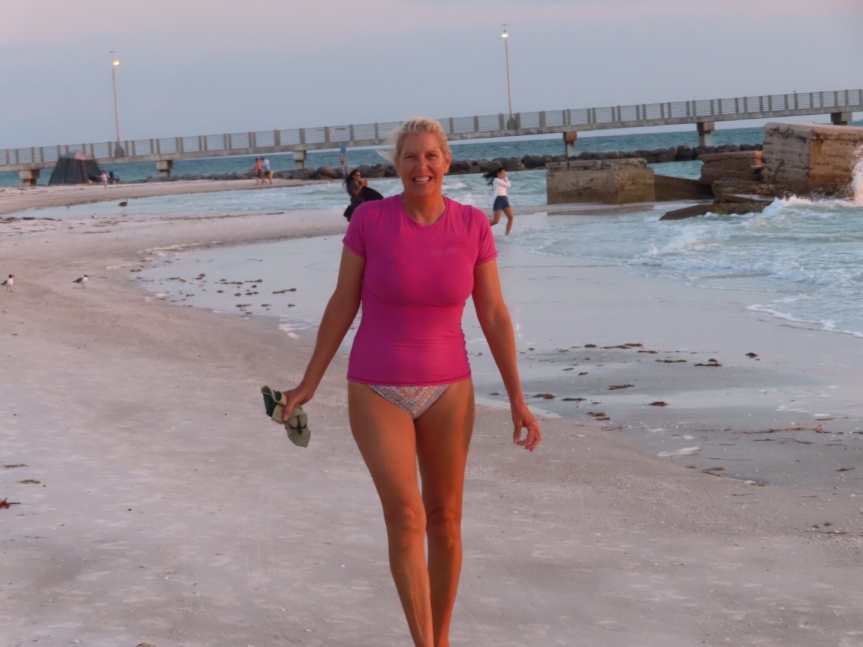 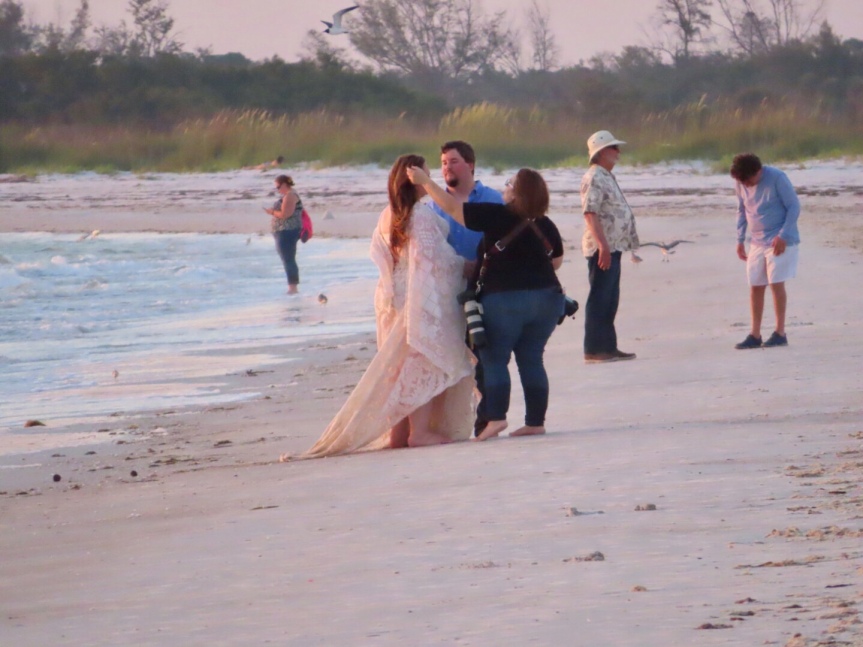 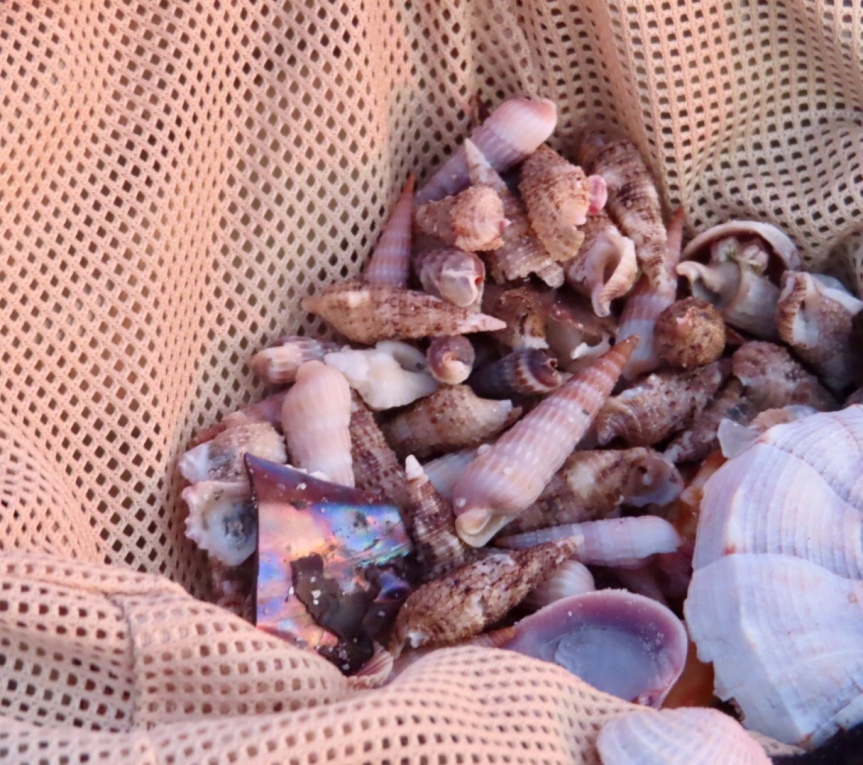 We sat in our chairs enjoying our picnic dinner while watching the birds fly by. Ospreys, egrets, herons, gulls, pipers and one we haven’t seen yet on this trips, skimmers. They were flying along barely combing the surface to catch whatever it is that they like to eat. The sunset was awesome over the pretty green waters. A fantastic end to a gorgeous spring day on Florida’s gulf coast. 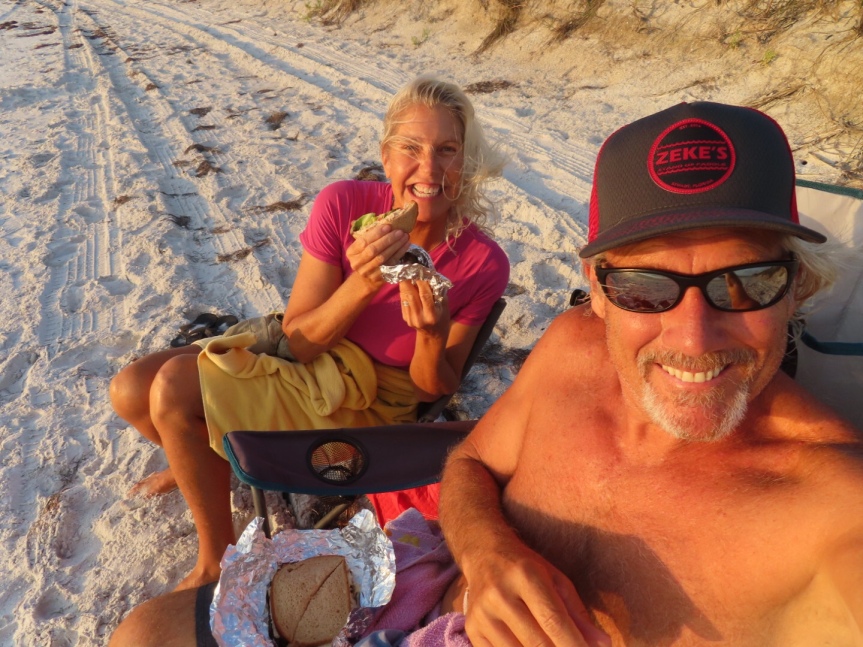 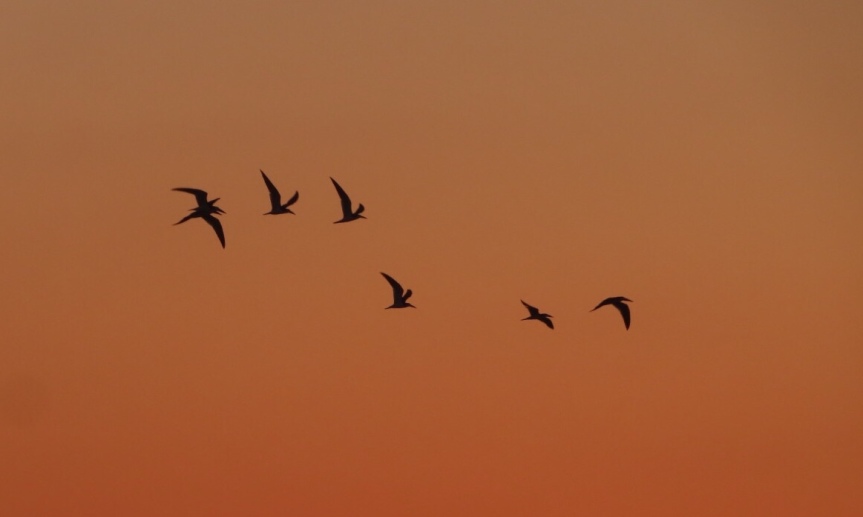 2 thoughts on “Exploring the Park”