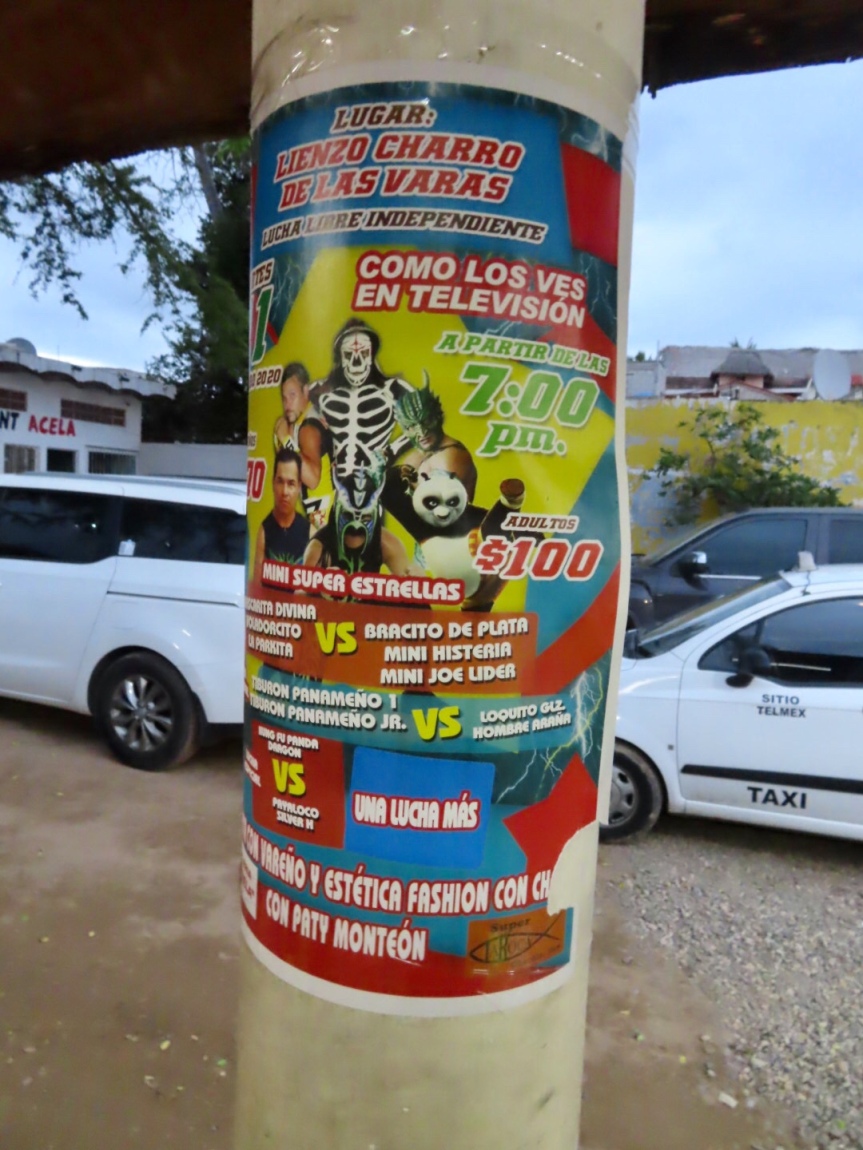 I was up early sitting out in my chair sipping a cup of tea when Alan came strolling up the beach from the north carrying a big ol’ robalo. Wow, it must have weighed close to twenty pounds. I loaned him my cutting board and a knife. He soon had a pair of old timers looking over his shoulder telling him how to go about filleting it, so I went back to my chair and finished uploading my post for the day. Schools of bait fish were being hit by jacks right out front. Flocks of pelicans and frigates were diving and whirling in a frenzy. Stoked about fishing, I grabbed my pole and chased the schools up and down the beach, but didn’t get a bite. 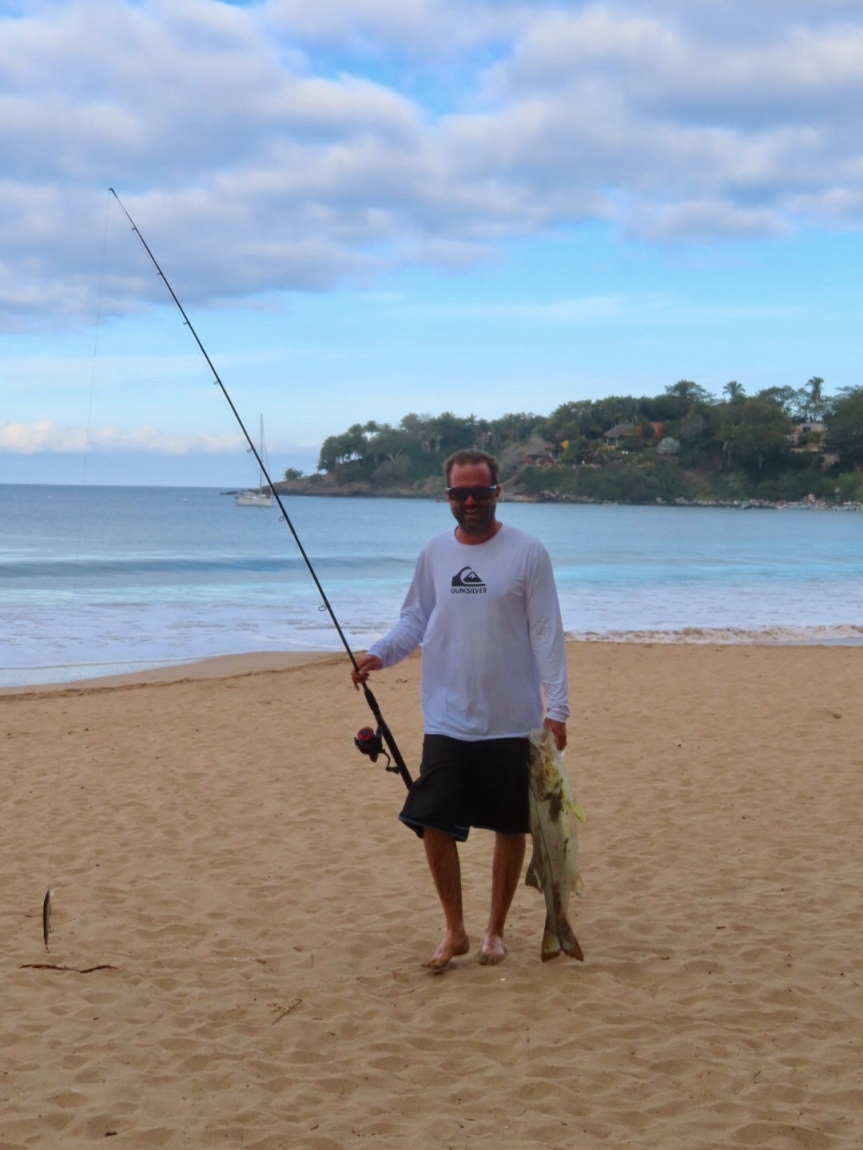 At lunch time, we took a couple of filets over to the palapa restaurant and they cooked it up for us and served it with rice, beans and salad. A mojo de Ajo, loaded with garlic and spices. The snook was excellent, a delicate white fish with firm filets. We relaxed in the shade watching the tourists hanging out at the beach. 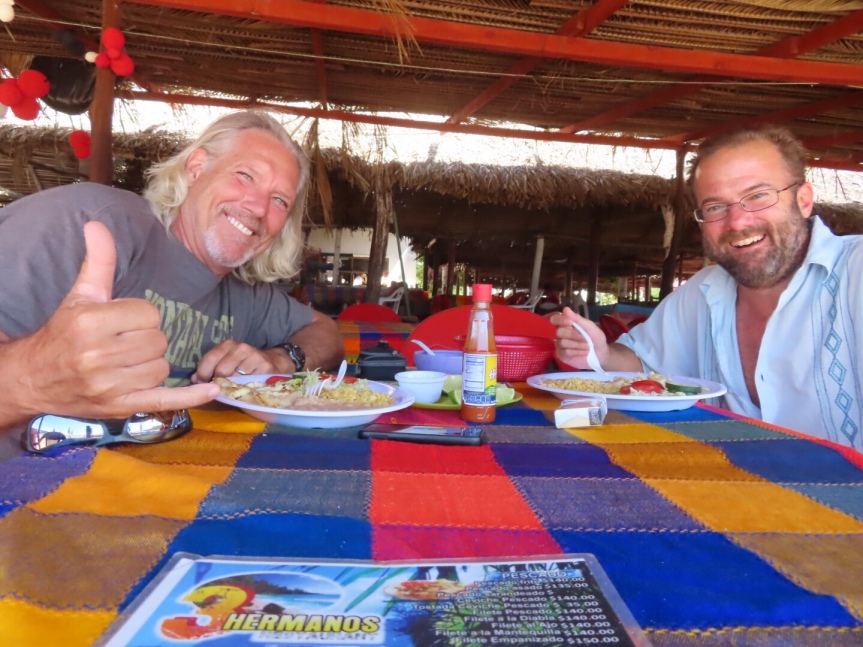 A troop of seniors with boogie boards went walking past to try their luck in the popping little shorebreak. Grays on trays, as they are known in Lo de Marcos. They seemed to having a great time sharing waves along the beach. More reading and lounging were in the works until the evening rolled around. We had seen a poster advertising professional wrestling, lucha libre, in Las Vara for tonight, Alan and I decided it might be something cool to see so we caught a cab and headed into Las Varas.

The show was in a funky little concrete arena on the edge of town. We arrived a little early so we walked down the street looking for a food shack to grab a bite of dinner. It turned out Popeye was serving up some tasty bowls of birria just a few blocks down the road. We sat out in our plastic chairs as locals came and went, mostly country folk with lots of cowboy hats to be seen. 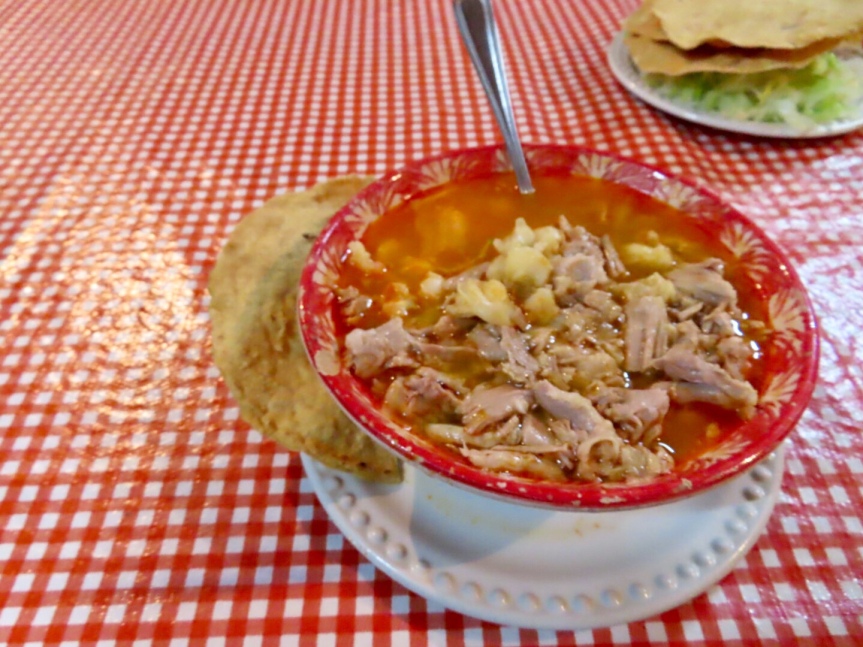 We went back and caught the wrestling matches. It was geared more towards the kids in the audience but everyone seemed to be having a good time. We moved down to plastic chairs at ringside and found ourselves part of the action during the tag team match between the Panama Tiburones and the Mexican heroes. One Panamanian took a liking to us and stopped mid match after tossing a Mexican into the buckle to come over and pose for a selfie with us. We were booed by the Mexican crowd as the Tiburon went back to work roughing up the Mexican, but as always happens, the crowd started chanting ‘si se puede’ and suddenly the battered and bruised Mexicans woke up from their concussions and started laying down a whupping on the Panamanians to wild cheers from the crowd. 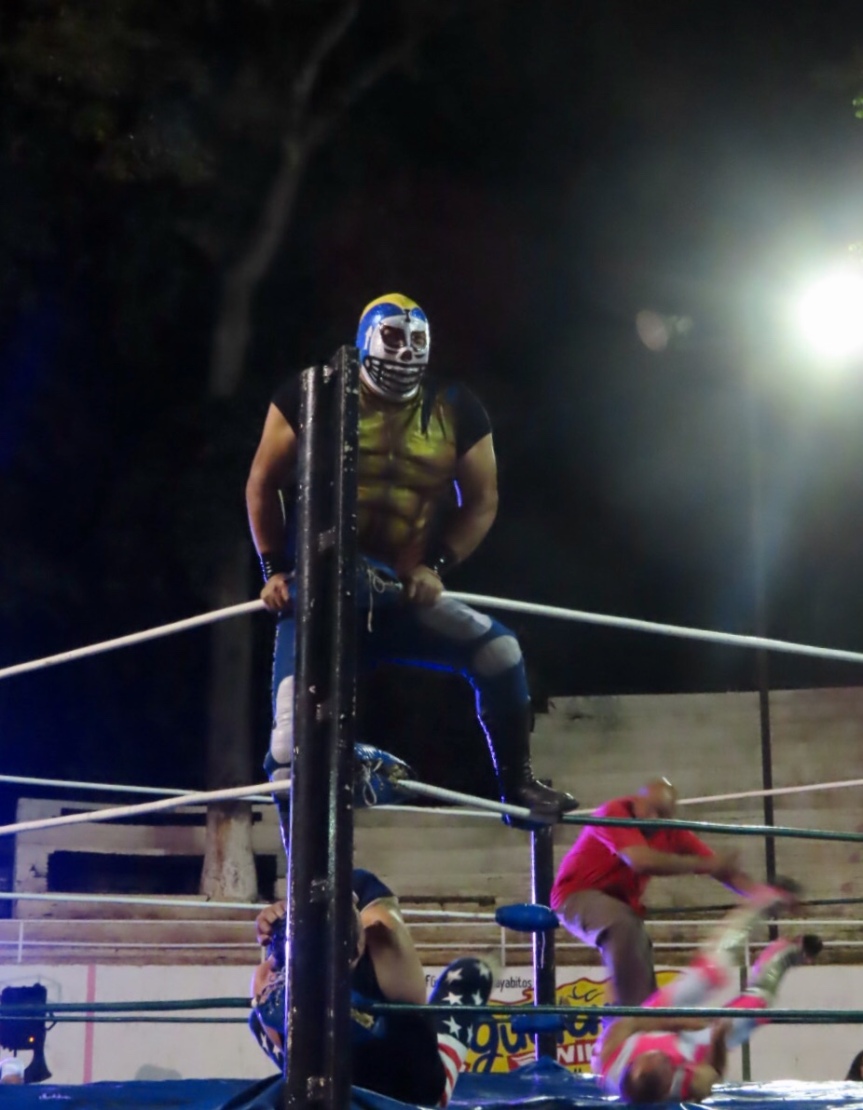 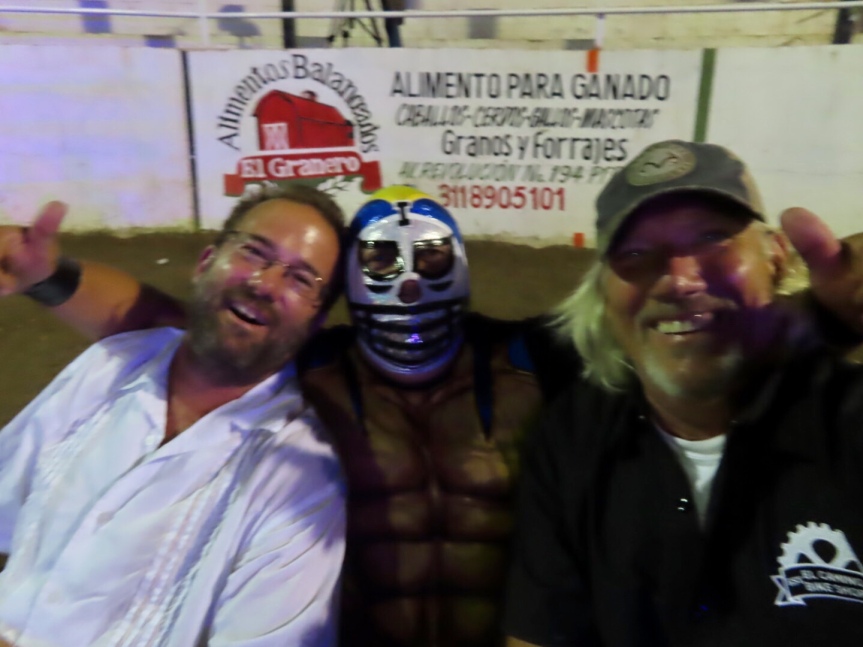 There is only so much Lucia Libre one can handle, so after the third bout we slipped out and walked to the center of town to catch the Féria. The big annual festival had been running since the fourth and was finishing up on the twelfth so this was one of the grand finale nights with a big band and fireworks. The streets were packed and bands were belting out beats at every street corner. The main band at the plaza was so unbelievably loud it rattled the brain. To top it off, another band set up in the center of the plaza and started playing their own music to blend in with the 20 person banda on the stage. 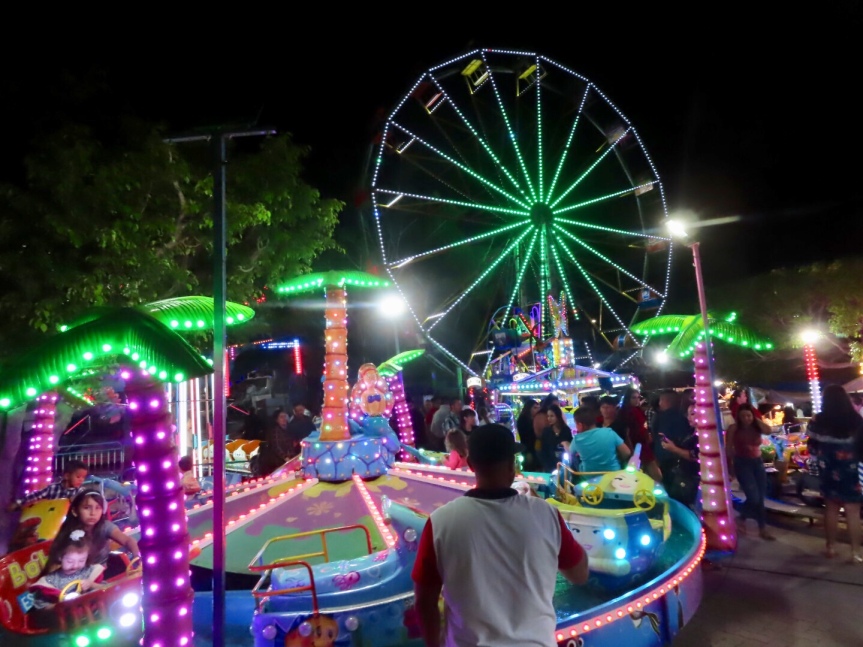 We did a loop and ended up near the cathedral. I wanted to have a look inside so we walked into the church courtyard just as they were lighting off the big stick and reed tower of fireworks on the side of the church. Kids vied to see who was most daring and would stand closest to the popping and sizzling wheels of spark and flame. The fuse lighter did one side of the twenty foot derrick at a time until it was time for the big finale at the top where a spinning vision of the virgin mother drawn in sparks rotated around with the word Tepeyac on the other side. When it finished burning the round top piece started spinning until it launched itself into space to be escorted by a shower of traditional fireworks to explode in the sky. Another participant had a woven bed of fireworks on his back with a bulls head in front that he chased bent over after the children in the crowd while exploding with sparks. 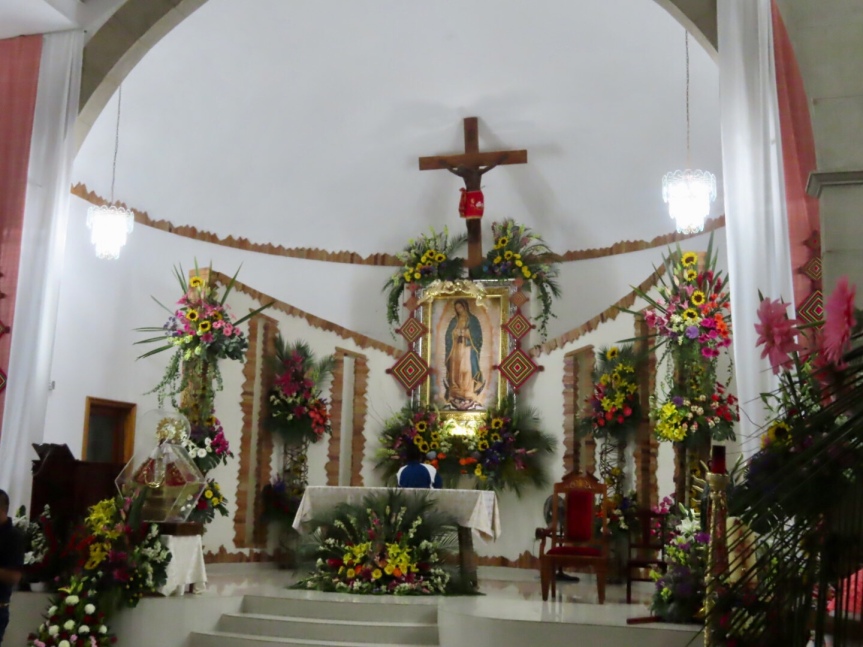 We slowly worked our way through the dozen or so blocks in the town center that closed their roads for the festivities until we arrived at the main intersection by the highway where we hailed a cab and headed back to the peaceful shores of Chacala. A memorable night on the town.