I was awake early, first day in paradise! I had a cup of tea on the veranda overlooking the ocean and read a bit in my book. PJ had a rough night sleeping and appeared a while later. I walked the short trail down to the ocean and had a quick dip just to feel the luxuriousness of the warm tropical water. It wasn’t long before Chuck and Sharissa came by and we followed them along the back roads through the teak plantations and hidden B & Bs. We arrived in Tamarindo midday and started hitting the surf shops trying to find me a board.

Our friends toured a shop or two with us then took off on their own to visit with friends and do their errands. We drove to the end of the road where it now has a circular roundabout at the main beach. The town has grown exponentially since I was here many moons ago. We found a parking place and started wandering around. A sarong hanging in a street stall caught PJ’s eye and she worked out a price with the girl and wrapped it up.

There was a board rental place on the beach so I asked the young Rasta kid, Ronaldo, if they had any boards they wanted to sell. He called over the owner and he said no, but Ronaldo decided to adopt me and escort us throughout town trying to find me a board (and perhaps a commission). It was helpful as he knew where a number of nearby shops were and we scurried around through alleys and backstreets to emerge on main roads with little shops. We visited five or six but couldn’t find a board with the kind of extra volume that I like for paddling. Our last search was a death march down the beach in the afternoon sun to a camping zone with a shack in the back with a few real beater SUPs. PJ had smartly declined to join us on this slog and waited in the shade of a beachfront restaurant for our return. I thanked our bro and gave him a few colones for his help. He didn’t really want a tip, he was genuinely just being helpful but I know times are tough these days with the lack of tourism. He headed back to the rental stand and we drove on down to a row of shops along the main road.

At a shop called Bananas they had a decent Rusty that looked thick enough to provide me the float I’m looking for. It was a rental so they really weren’t looking to sell it. One thing about this area is that they unapologetically charge an arm and a leg for surfboards no matter the condition. In the end, I ended up buying the board. One, to be done shopping and also because I really think this shape will suit my style. Andre was going to do a quick repair on a little ding on the nose so PJ and I headed over to Auto Mercado, the big gringo grocery in Tamarindo and stocked up on supplies. 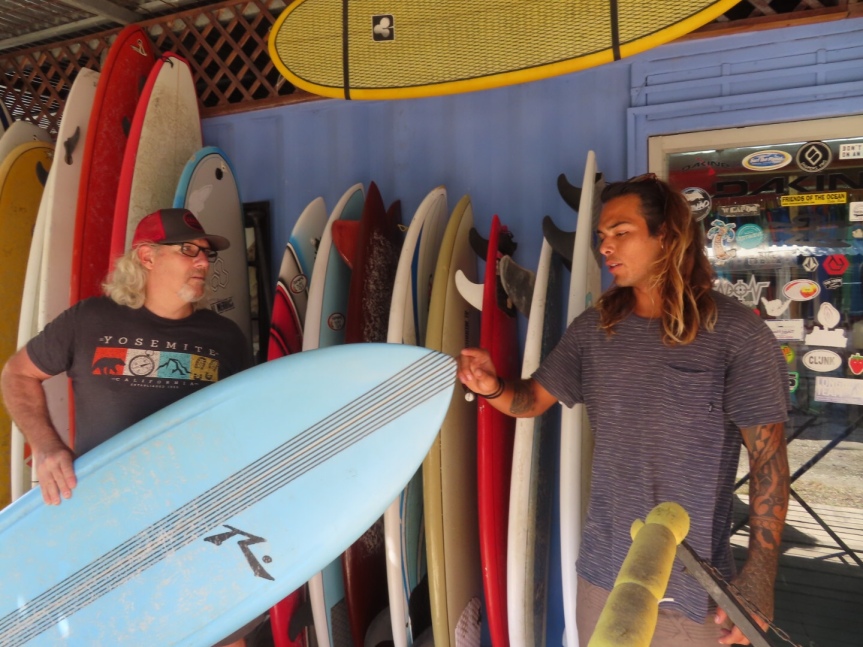 The board was ready when we returned, so we strapped it on the car, tossed a boogie board in for PJ and headed for the house. Having a new board means that a surf is mandatory, waves or no (in today’s case, no). Having a bit of daylight left, we hiked south down the beach barely squeezing by the rocky points where the high tide was breaking against the bluffs. Junquillal proved to be farther than we thought but after a number of just around the next corners, we arrived and paddled around the beach break hoping for something to ride. Just slammers right on the sand but it sure feels good to paddle in the warm Costa Rican waters. Unfortunately, the tide had risen further as we were racing the dying light back to Playa Blanca. PJ was a bit daunted at having to wade into the white water beating against the cliff to tiptoe across the rocks but she was a trooper and we powered our way home. Our little trail up is easy to miss and we passed by it in the evening glow. We backtracked and made it home to jump in the pool for a cool rinse to end our day.

After drying off, we set ourselves up with a big platter of fruit and cheese that we munched with a large fresh baguette from the market. Totally relaxed and pleasantly tired we read a little then retired early falling asleep to sound of geckos making smoochie noises in the dark. 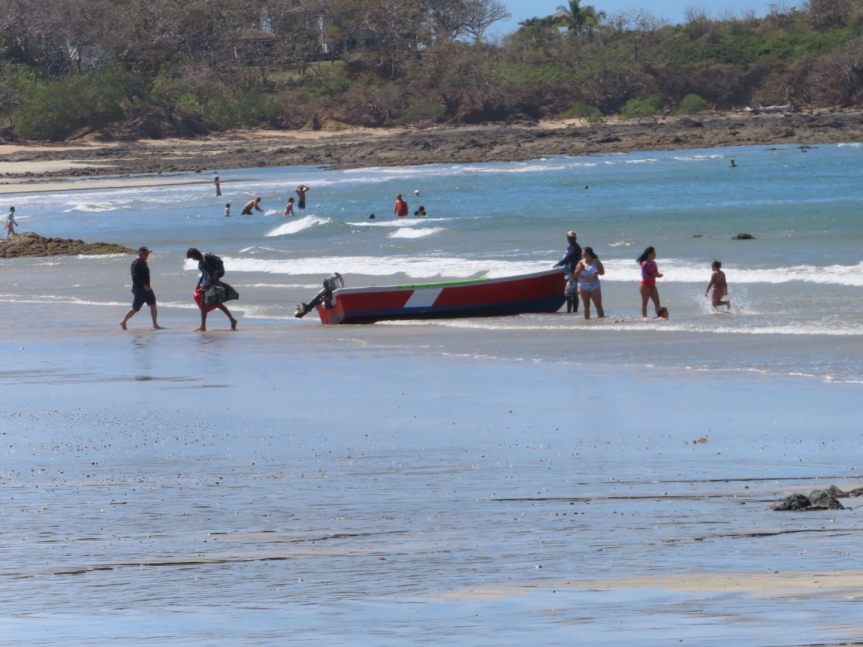