State #3. Today was our longest day of driving yet. Over 300 miles. It took us over 7 hours to cover the ground from Sedona to Bluewater State Park in New Mexico. I know, that comes out to something like 40 miles per hour, but that doesn’t include numerous stops along our route. We had everything packed and left Sedona at 7:30 trying to beat the heat before pulling the long grade back up to Flagstaff. Lexi behaved admirably and although we weren’t the fastest vehicle going up the hill, okay, we were the slowest, the temperature never rose over 210. We rewarded her with a rest at the Home Depot in Flagstaff where I returned the little tire compressor I’d purchased online that had given up the ghost back in Elsinore. I was hoping to upgrade to a more powerful model, but the next step in quality came with a huge step in size. Space is valued at a premium in our little home on wheels, so I opted to just trade for the same model and maybe go easier on it and see if I can milk a few more uses out of it than I got from the original. 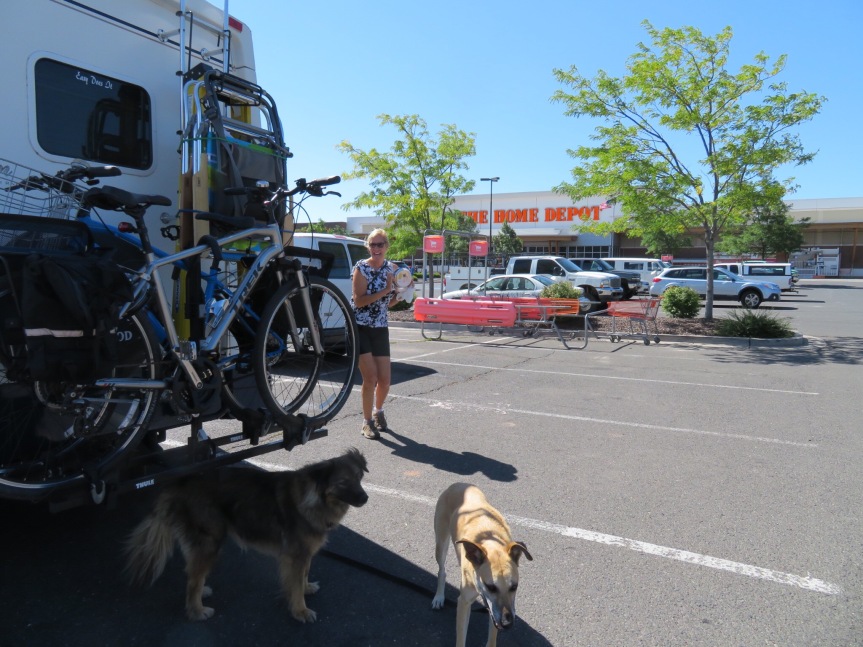 I just set the cruise control on 55 and sit back and watch the world roll past. The ride is comfortable, we get to see the country we’re passing through and maybe it boosts my pathetic gas mileage by some meager amount. After Sedona, it was hard to get too worked up over the painted desert but it has its own beauty nonetheless. We stopped in the little outpost of Navajo to gas up and sit in the shade and eat a Subway sandwich. We’ve got to give the old wagon its rest. 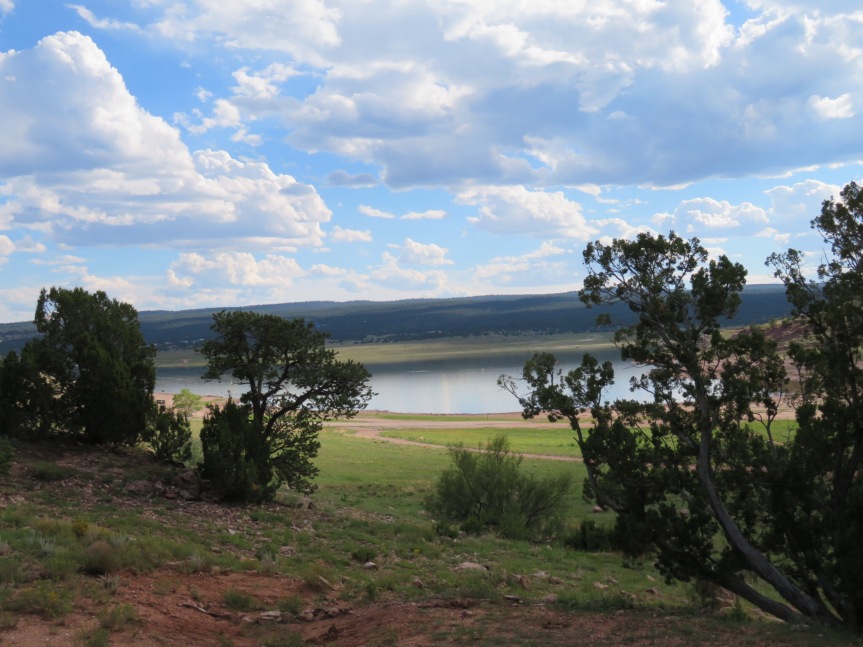 At each stop, we try to get the dogs to eat something. Traveling has put a damper on their appetite and we are having a hard time coming up with a formula to get them to eat enough. PJ went into the PetSmart while I was in the hardware store and got several different types of food to try. Wet food which they battled over at home can barely get a half hearted sniff and small token tasting. Cali’s ribs are starting to show and we are scratching our heads trying to get them to take in enough calories.

After Navajo, we soldiered on through tribal lands making our next break at a rest area just over the state line In New Mexico. Hard driving, long day in the saddle. I had found a state campground online that looked promising. Bluewater Lake State Park near Prewitt, NM. We rolled in around 4:30. The road leading in climbed up over a steep ridge and the fan clutch was howling as we entered the campground. There was a small loop of sites with hook ups, but people were close together and we’d had enough elbow to elbow closeness in Sedona. We chose a dry camping spot at the end of the campground far away from anybody else. We are overlooking the lake and we are isolated enough that the dogs can run free. We set up camp and made cheese sandwiches before talking a walk around the camp. Thunder clouds were passing by, but we missed the rain. Just a few little sprinkles. In bed early and looking forward to seeing more of New Mexico tomorrow.