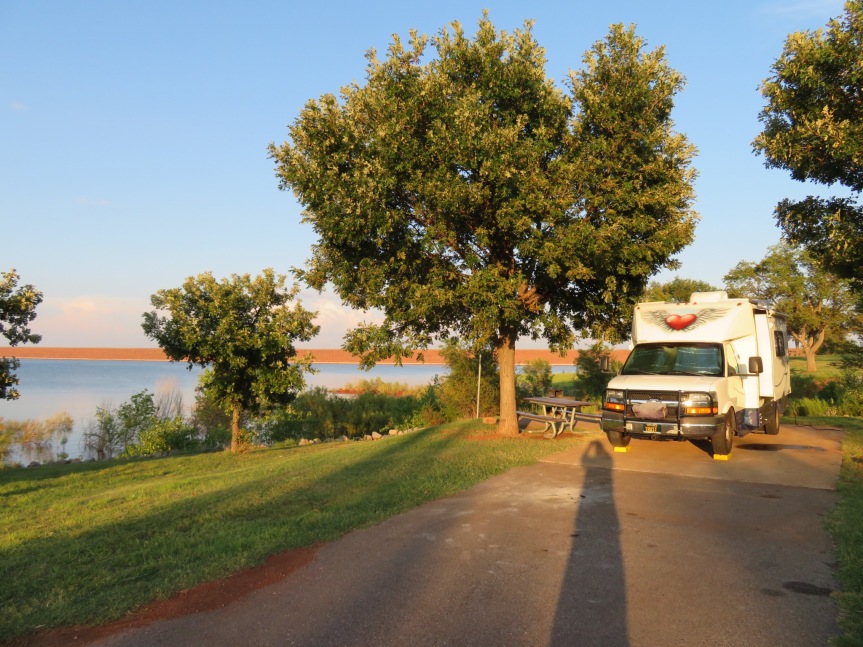 Even though we strive for an early start, it never seems to happen that way. I took the dogs for a long walk over to the far side of the park by the dam. Let them off leash and they were digging the freedom. Returned to camp and got all of gear stashed. Bob came over and talked for a while. The solo RV life can get lonely some time. I’d given him my copy of The Unforgiven with Clint Eastwood and he watched it last night and we talked about that and picked some wild plums off the little tree next to out camp. Said our goodbyes and rolled out of camp. 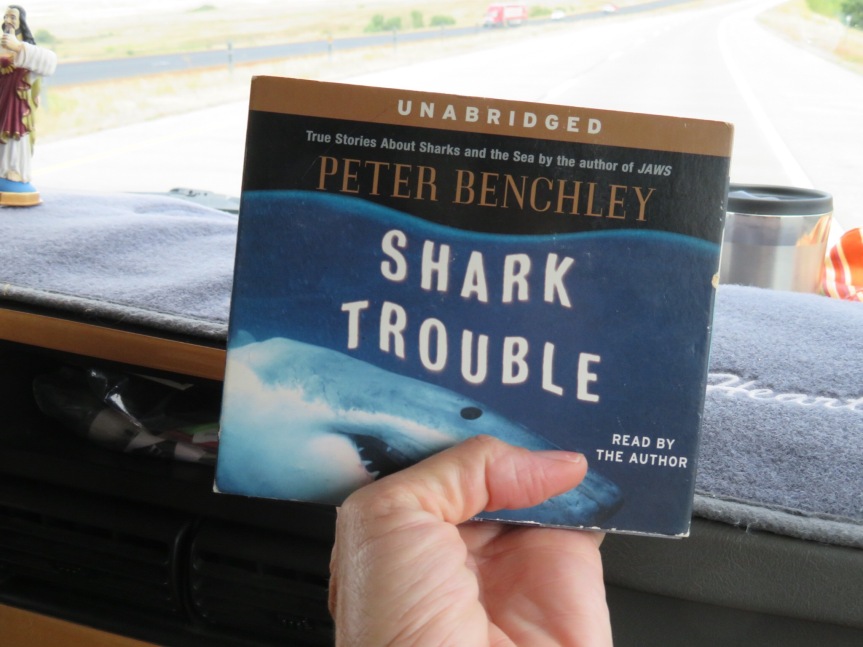 Stopped by the dump station and it was already 10:00. Only made it 2 miles down the road before our first stop. Grabbed some waters and snacks in Logan, then took a series of small back roads for 30 miles or so to come out on I-40 further to the east. Mexican style roads, a little rough on the pavement and no shoulders either side. Beautiful country and zero traffic. We listened to a book on CD about sharks by Peter Benchley. Helped the time pass. 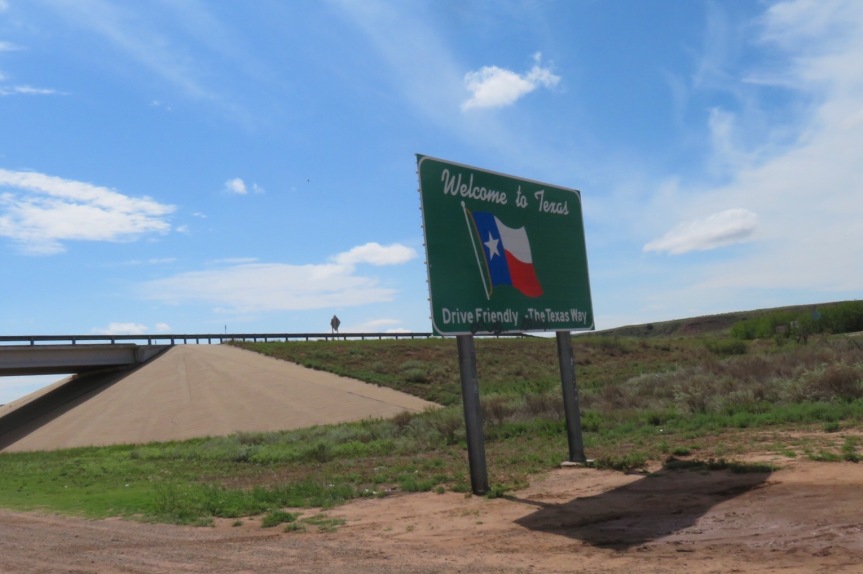 Reached the I-40 and continued on into Texas. We pulled off on a rural ramp with no cars and took a little break, walked the dogs and PJ made us some sandwiches. Drove hard through Amarillo and made our second rest stop at a Loves truck stop in Conway, Texas. Filled the tank while PJ walked the dogs. Checked the mileage and coming downhill from Santa Fe, we got an amazing 14.6 mpg. Must have been all downhill with a tailwind. Last time we got 10.7 which seems more the norm. Kept trucking on and entered Oklahoma in the early afternoon. We are now in central standard time.

We stopped at the rest stop and visitor center just over the border and got some maps of the state parks. Long day driving. 35 more miles and we reached Foss Lake State Park in Foss, OK at a little after 5:00. Six hours on the road. Cedar point campground has got to be the prettiest camp we have made so far on the trip. 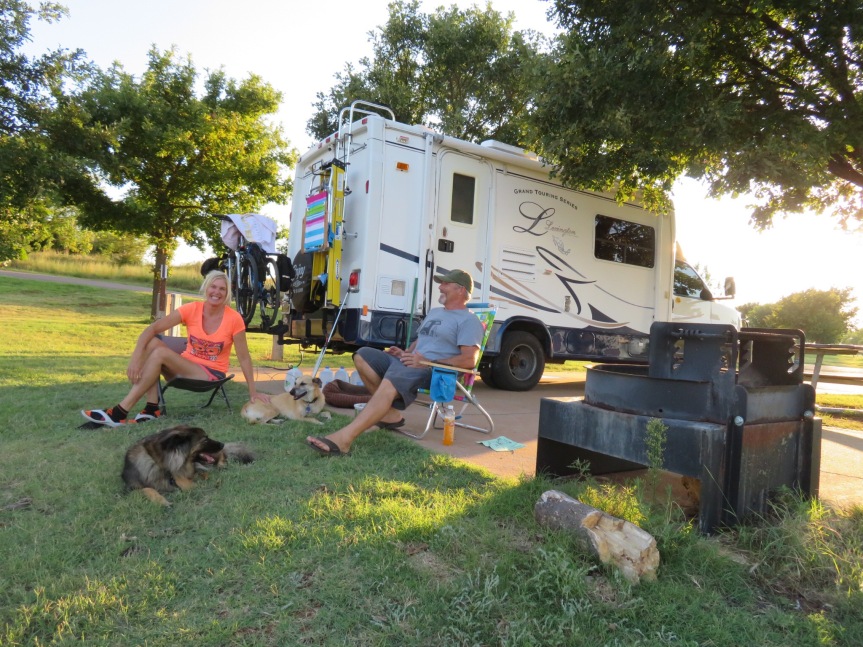 Big grassy lawn areas separate the sites. We got the first one on the end, so only have a neighbor on one side and he’s spaced pretty far over. We are right on the lake. There are about a dozen sites with only half of them taken.

I hooked things up outside and PJ took her time getting the inside organized. We gave each other a little space after such a long tiring ride. We relaxed outside on the grass and fed the dogs. They are still finicky, but seem to be eating a little more than before. I made us some bean and cheese burritos and we sat at our picnic bench and enjoyed them with some chips and salsa.

After cleaning up, we took the dogs for a walk and checked out the lay of the land. Checked out the showers and then walked over to a long grassy point that overlooks the marina. Darkness was falling and the fireflies were coming out and twinkling among the trees. We made our way back to the RV and sat outside watching the lights from the houses across the lake reflect on the water. 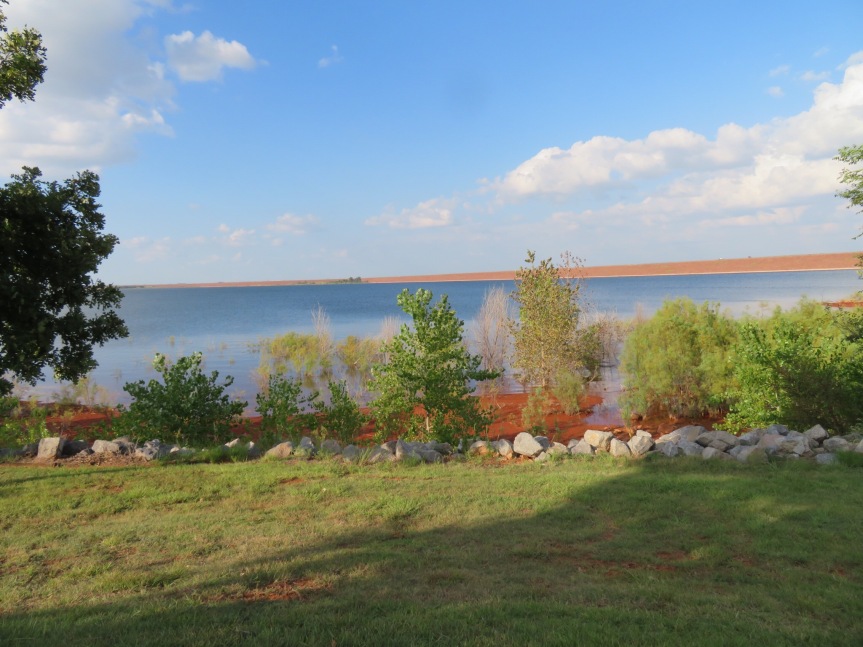 Lightning was flashing in the faraway clouds and the fireflies were getting even more active. Still warm out as we rested up enjoying the peace and calm. Went inside and hunted down the bugs that had gotten in and had a little swat fest. Luckily not biting insects just moth like hoppers and little gnats. Pared down their numbers enough to relax and downloaded some pictures and wrote up a post. A little after ten, the thunderstorm hit and the rain began to fall. Kept the A/C cranked to keep the dogs from hearing it. Pretty booming though. We’ll see how close it gets.