I was awake early and lying quietly as the sun began to come up outside. I thought I’d slip out undetected and check the sunrise, but everybody woke up and we all went out as a team. The sunrise team. Turned the dogs loose to run and watched as the sun put on an amazing show of color as it ascended over the dam.

We walked all over the Cedar Point area having the entire park to ourselves. The other four campsites were snug in their cots as we explored the play areas and the marina. The only other sign of life that appeared to break the early morning serenity at around 7:00 was, you guessed it, the lawn mower guy. The only five occupied campsites on the lake and he was going up and down in front of the sleeping neighbors. Must have gotten his cue from the bros over at Bluewater State Park in New Mexico. 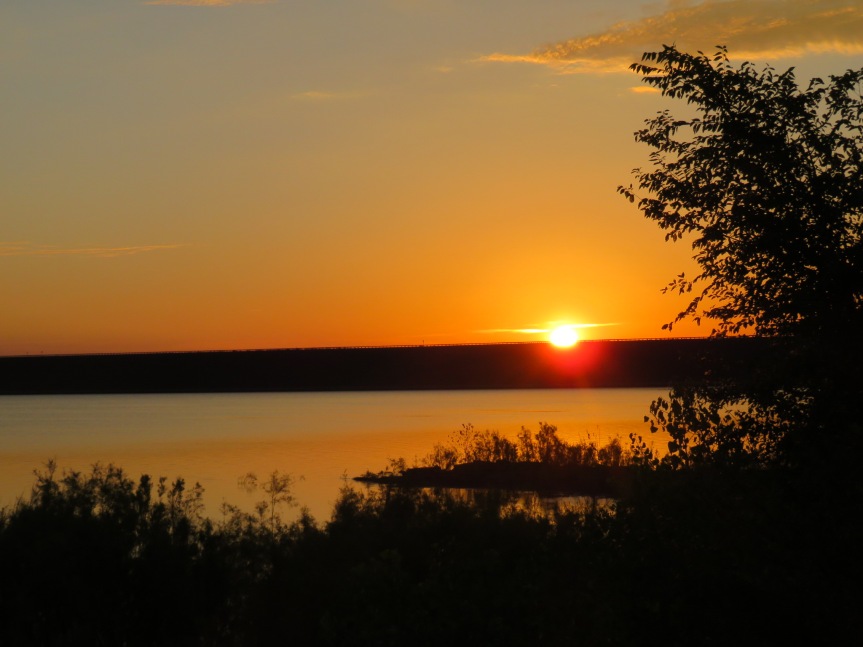 Returned to camp and PJ set us up with an awesome breakfast of muesli with blueberries, bananas and flaxseed. We rested inside for a while making plans for our next stops and trying to reserve a spot for the weekend. No luck getting a place ahead as Oklahoma requires a reservation five days ahead of time. So no setting aside a place for tomorrow. They do set aside a number of first come, first serve sites so we’ll try to get there early if we can.

Koda loves to roll in the fresh, wet grass!

Pam was tired of being inside and things were starting to heat up so she suggested we hike down to the water and get in a swim. Fantastic idea. We bush whacked through the scrub and waded through the red clay and marble to dive into the 78 degree water.

A great wake up call. Tons of minnows were nibbling on our toes. Both of the dogs got in a little deeper than their usual comfort zone. I guess the more lakes we visit, the bolder they get.

Thoroughly refreshed, we returned to Lexi and while PJ fed the dogs, I cooked up some grilled cheese and mushroom sandwiches which we served with chips and salsa. We sat in our lakeside patio and watched the occasional boat go by and enjoyed the relative solitude at our end of the campground. 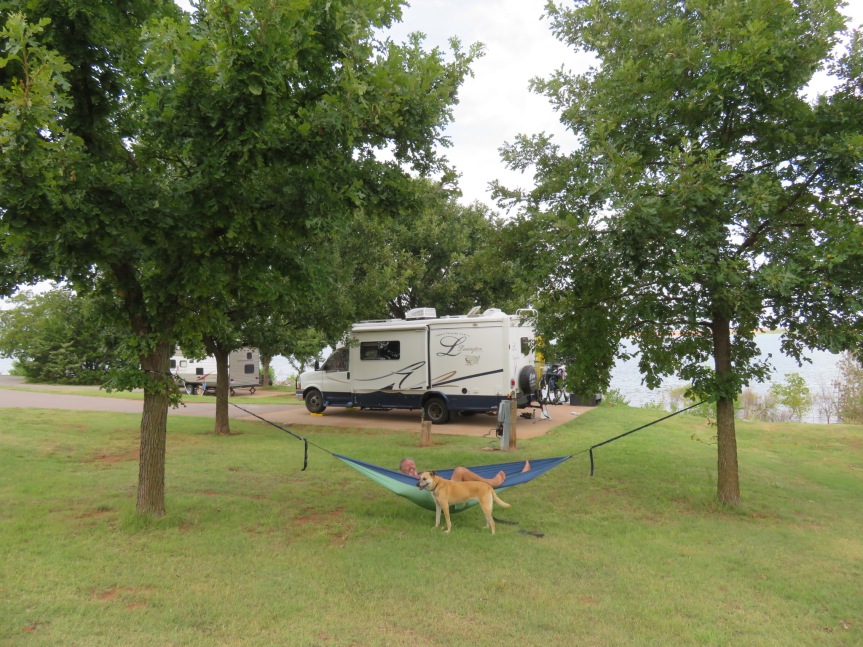 Hung the hammock and had a little bit of quiet time strung up between the oak trees before retiring inside for a genuine nap. I did a little guided meditation, then fell deep asleep before it was through. We were relaxing after when the alarms went off on our phones. Tornado warning, go for shelter immediately!

As we were gathering the dogs and a few things to take with us up to the stone bath house, the sirens across the lake started wailing. We could see the funnel clouds dipping towards the earth on the opposite side of the lake. The lake’s surface started to roil and boil as we stood next to the bathrooms. The campers from the other four camp sites were all gathered as well.

PJ took the dogs into the bathroom. They were shaking like leaves. A few us stood outside watching to see what was going to develop. One of the Texans had a weather app that showed the satellite image real time of the passing storm. After a while, we were in the clear and returned to our RVs.

A lot of excitement for the afternoon. We still had a severe thunderstorm watch and they started passing through not long after. We had to give the dogs their Xanax and turn up the white noise. We hung around inside watching the rain and keeping one eye on the clouds and one eye on the phone for warnings. Everything calmed down and we made a little dinner and had a quiet evening inside. But the quiet didn’t last. Around 10:00, the gnarliest thunderstorm yet starting pounding us, pouring rain and some frighteningly close lightning and thunder.

2 thoughts on “Tornados and Sunrises”