We stepped out into overcast skies this morning. Some of the other campers had already skedaddled early. I took a quick shower and we got packed up and rolled out around 10:00.

PJ drove for the first stretch to Elk City where we had a quick look around. Cool old Route 66 rural America vibe. We got on the interstate and started covering some ground. Lots of pretty rolling countryside streaming past our windshield. Made a pit stop at a Love’s truck stop, gassed up and grabbed a bite to eat. Dogs were less than impressed by all of the rumbling semis idling in the big lot. It kept them eternally nervous and unable to focus on their important business at hand.

We got back on I-40, setting the pace for the slow lane. Worked our way through the Oklahoma City traffic and moved onto a more north easterly course on the I-44. Pamela was working on downloading an alternative navigation app while we were on the road. She was playing with Waze and Google Maps trying to pick the better of the two. Anyone have experience with these?

We made our second rest stop at a Walmart in Chandler, OK. I went in and did the shopping while Pea tended to the dogs. Bought enough food to get us through a week. Cashier was none too friendly and we tend to get a few strange looks here and there.

We drove on paying the toll for the toll highway that runs from OKC to Tulsa. After we exited the I-40, the Garmin was trying to get us to go in a direction we knew was wrong and PJ’s phone ran out of battery, so we kept driving hoping to find our way. Big, thick black clouds spitting lightning were gathering in the distance. Who needs a GPS. I pretty much knew that if we just drive into the teeth of the storm, that’s probably our destination. And so it was. Stopped at a Conoco station and asked directions. With a ballpark idea of the route, we drove on to Keystone State Park. We were right in the center of the storm. Rain so hard it was difficult to see the road. Once in the park, we pulled into the first spot we came to and sat a while until the worst had passed. Then we drove around and found the perfect out of the way site in among the oak trees. We got set up and the dogs were in pitiful shape quivering in fear. It took a while to calm them after the storm finally passed.

We sat inside eating dinner, then the rain slowed to a light drizzle so we took the dogs out and fed them. Afterwards, we took a walk around the lake to see what was going on. Quite a few people pulling in as this is the week running up to Labor Day weekend. The camp host was expecting the park to get pretty full, but the rain may hamper that some. The big crowds seem to be down in the close together “pull through” spots near the water that accommodate the bigger rigs and are right next to the big playground. Up in our little forest, there are only three campers so far as night is beginning to fall. Hopefully, it stays nice and peaceful. Sunset was a beauty as the clouds were breaking up and the sun was just making it’s way free. 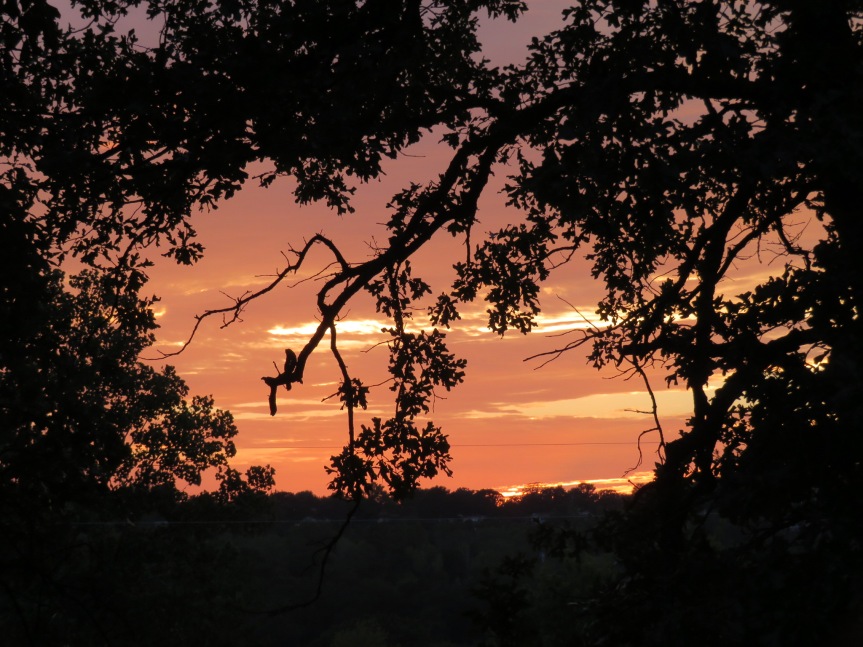 We’re always a little tired after a long day of driving, so we closed up shop and relaxed inside reading and blogging.

3 thoughts on “Thundering Down the Road”