PJ decided to stay at the casita while I went to town, so I made the trip solo. I caught the noon shuttle into Bucerias for a follow up visit to the doctor. When Joaquin dropped me off, the consultoria that I originally went to was closed on Saturday so I walked a few blocks down to another one that the girl in the pharmacy recommended. There were several people waiting so I took a chair and waited my turn. After about a half hour, I was up and went in to explain my ear situation to the doctor, a woman in her mid thirties. She examined my ears with her scope and said that they were too inflamed for her to deal with and that I needed to see a specialist. I asked if she could refer me to someone and she pulled out a card for an ear, nose and throat guy. I asked if I should call for an appointment and she volunteered to call for me. He has an office in Mezcales just down the road, but wanted me to come to his other location in Puerto Vallarta. I said I’d rather set up something for Monday in Mezcales, but that is a holiday for the Virgen of Guadalupe. He said if I could make it at 5:00 to come to Mezcales so I agreed. I asked the doctor how much I owed her and she said nothing and drew me a map to the specialist and walked me out.

I had about three hours to kill, so I walked down to the plaza and had a look around. I walked back to the highway and had a torta at an old school loncheria. The food was good and I amused myself watching a trail of ants carrying a piece of food up the outside wall. 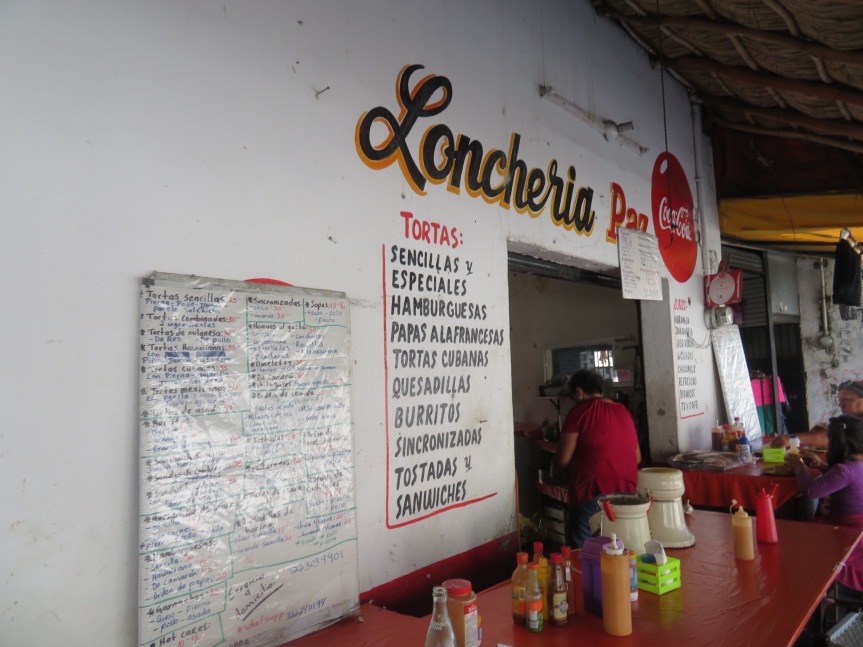 I went back down to the tourist area and checked out the small cathedral. I sat on a planter, called Pj and told her what was going on. I explored around the downtown area seeing what was where and having a look for the location of the English speaking AA meetings. I walked to the north end of the tourist zone listening to bands in the beachfront restaurants and checking people out. I went out on the beach and walked back to the centro along the sand. I found an empty bench in the main square next to the Huichol vendors and just sat and rested until a little after four when I caught a taxi over to the ear doctor’s in Mezcales. 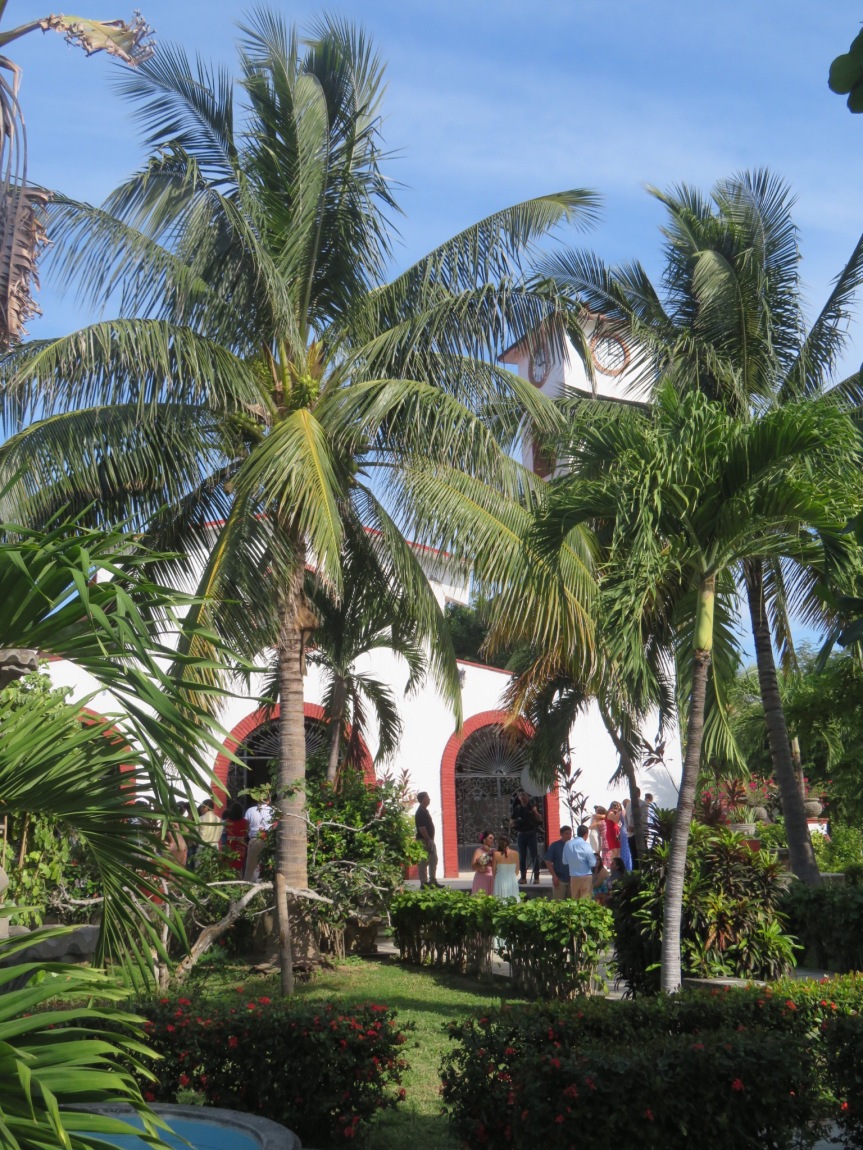 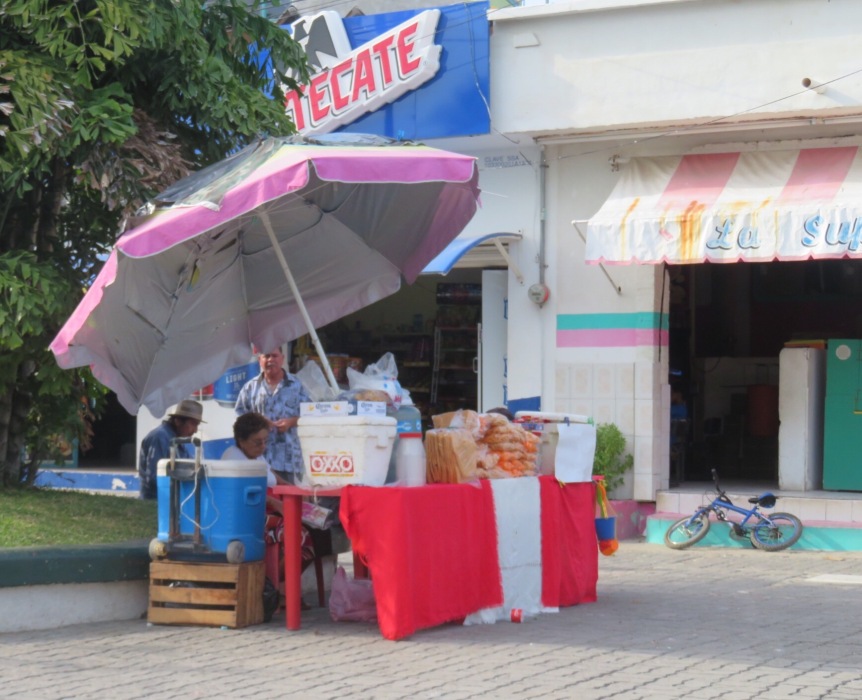 They are building a new bridge right in front of the doctor’s office so traffic was a mess. My driver took a bunch of back roads going against the flow on a one way street to avoid the snarl. He finally left me near the office and I found a little concrete wall to sit on. Next to the motorcycle dealer. Mezcales is more of a working class town with no tourism. I definitely stood out sitting there next to the locked roll up doors just hanging out for a half hour. Shortly after five, Dr. Coronado rolled up in a little Nissan sedan and unlocked the building and accompanied me inside.
He did some study for his medical degree in Houston, so he spoke a little English, but we did most of the conversation in Spanish. He took a little aspirator and sucked everything he could out of the ear. He had to switch to a smaller attachment since the opening was closed so much. He used it on both ears, then flushed all the remaining debris with a mixture of water and white vinegar. Loads of crud washed out, then he aspirated a second time to get things as dry as possible. He had a good sense of humor and we talked the entire time. He gave me follow up instructions and saw me out. Total cost was 600 pesos, about $30.

Out on the street, Friday afternoon traffic was combining with the construction back up to bring things to a crawl. I hopped on a city bus and rode it back into Bucerias centro where I bought a bouquet of flowers then caught a cab back to, Los Arroyos, a full day of tending to business. The hearing is much better and I can feel the body is dealing with less of a burden fighting the inflammation. 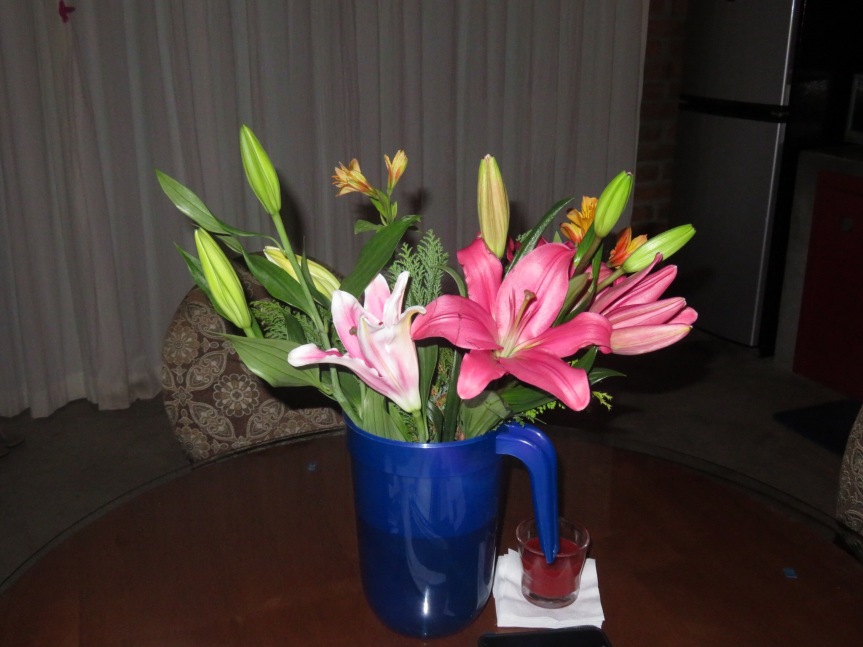 PJ was doing projects around the apartment when I got back. We sat and caught each other up on our day then ate some vegetable sandwiches. The dogs were a little anxious from some of the large scale firecrackers going off in honor of the Virgen Mary. I’ve really got to wonder how excited the Virgen really gets from hearing explosives disrupting the peace on every side. We turned on the TV and cranked the volume. Found some crime drama show in English and watched a couple of episodes while unwinding from our day.