Yesterday was a pretty low key day. PJ was doing stuff online and we ate our breakfast out in the bamboo grotto. Mid morning, we worked out for a while in the little gym near the front gate.

Being Weds., I went to the office to pay our bill for incidental charges accrued during the week. We don’t do any room service, so it was basically garrafons (big jugs) of water and laundry costs. Spent the day hanging with the hounds. Big full moon closed out the evening.

Thursday, we were up early and took the dogs for a long exploratory walk through the small colonia just west of Los Arroyos Verdes. There were a few big houses and one compound with about a dozen apartments. It looked like they were getting it ready to start renting out. As always, there are little crews of neighborhood dogs that want to check us out. 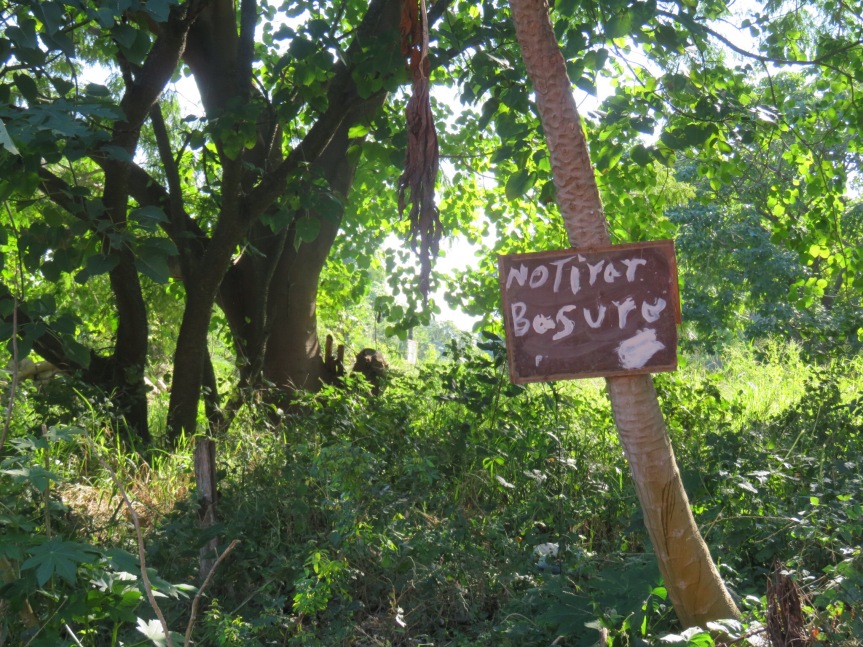 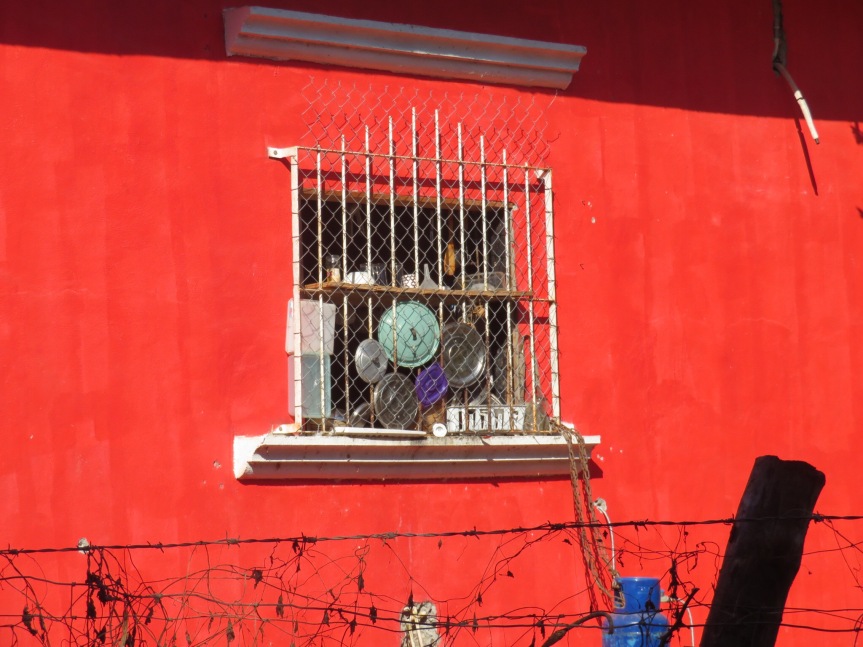 We said hello to a local couple with a cute yellow house who were out sprucing up their yard. Everyone seems to be getting ready for the upcoming Christmas celebrations. The kids have a break from school starting next Monday. We passed by lots of fruit trees: papayas and bananas almost ready to eat and lots of mango trees that aren’t producing fruit right now. Dogs seem to really enjoy getting out and about. They’re still a little confounded by the horses and cows but goats are their favorite. 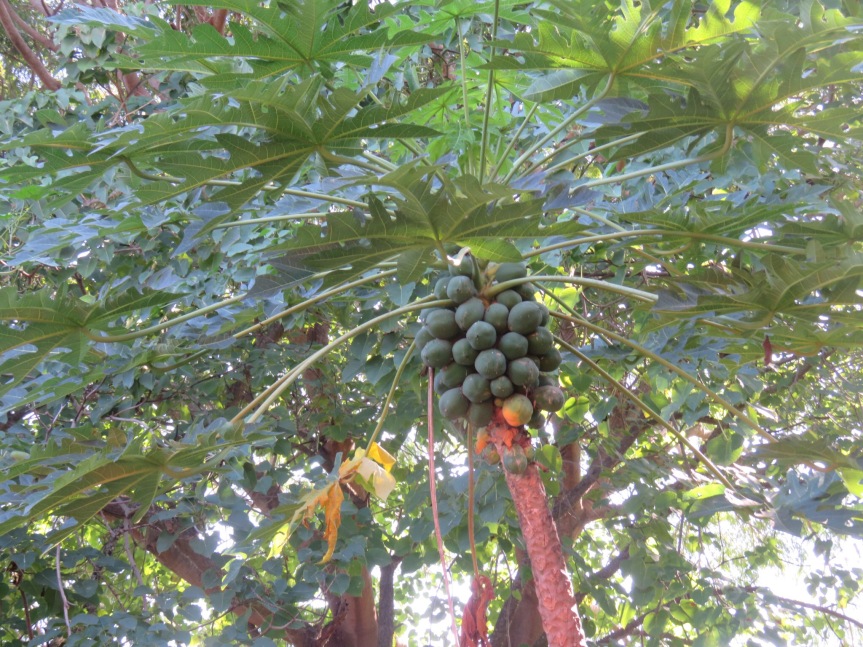 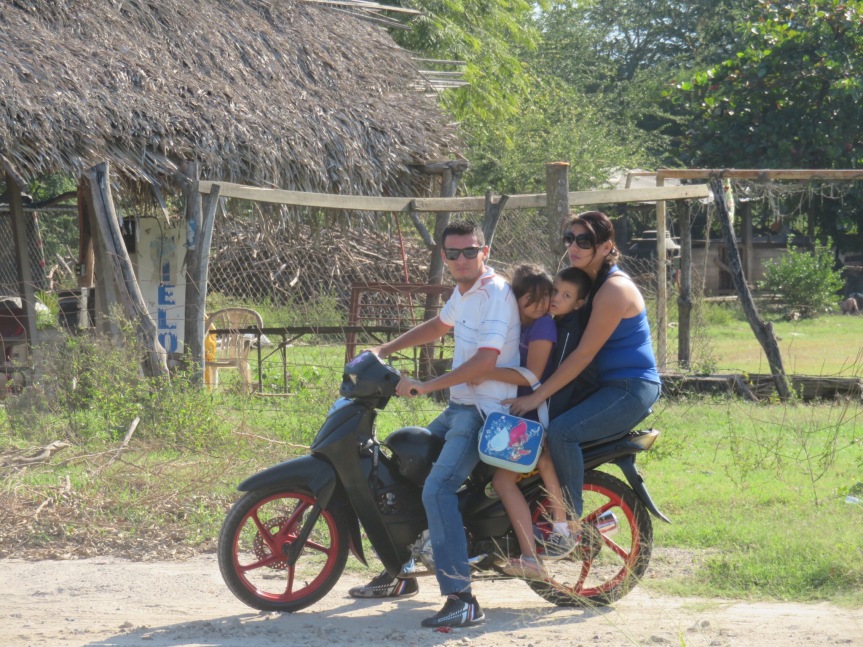 When we got back to the casita, the maids were strolling up to do the housecleaning. We sat out under the bamboo and waited for them to finish up. We locked up the dogs, turned on the newly serviced A/C and caught the shuttle into Bucerias. Joaquin dropped us off at a bus stop near the Chedraui just as a bus was pulling up. We hopped on and got comfortable for the ride into Puerto Vallarta. A slow moving, gear grinding beast. The bus stayed in the lateral lanes and stopped every so often to let on more passengers. Not too crowded. 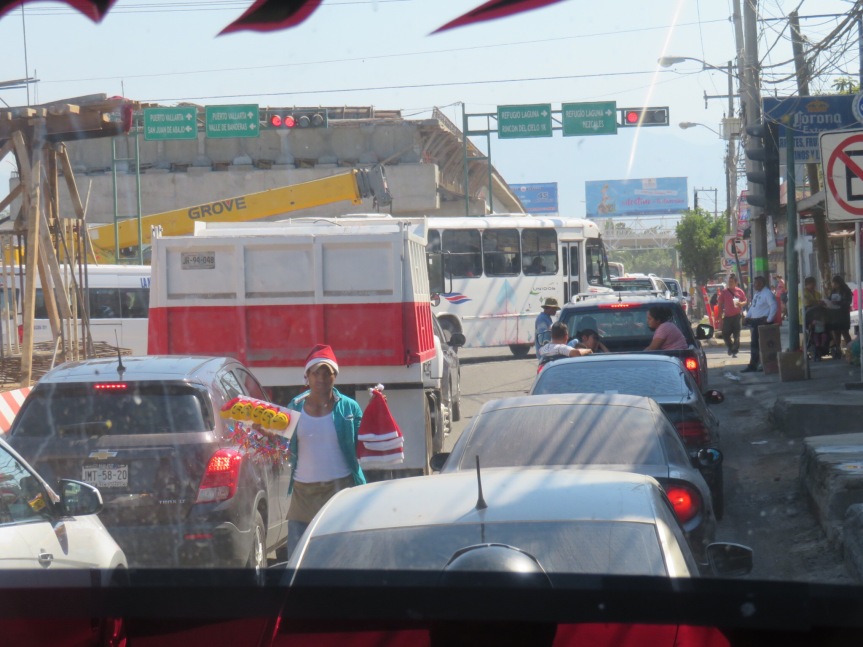 In a short time, we hopped off near the malecon and walked the rest of the way to the water. We were ready for some lunch, so PJ picked a little restaurant fronting the Main Street and we ordered up some food. The waiter, Javier, was exercising his English and we enjoyed a leisurely meal while watching people passing by on the sidewalk. 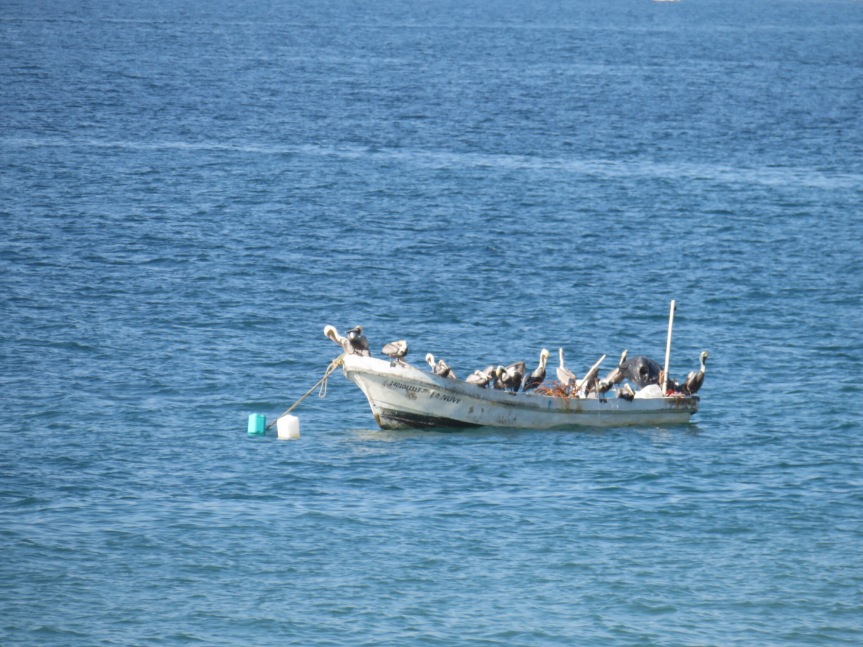 The malecon winds along the Bay of Banderas beginning where the sand ends and the rocky part of the shoreline begins. The street along the malecon is closed to traffic also providing a wide safe area to walk around. Souvenir shops and restaurants crowd along the waterfront each vying for your business, many with pitch men out front trying to call you in. PJ picked up another small blanket to use as a bed for Koda since she has been sleeping on the floor next to her side of the bed. 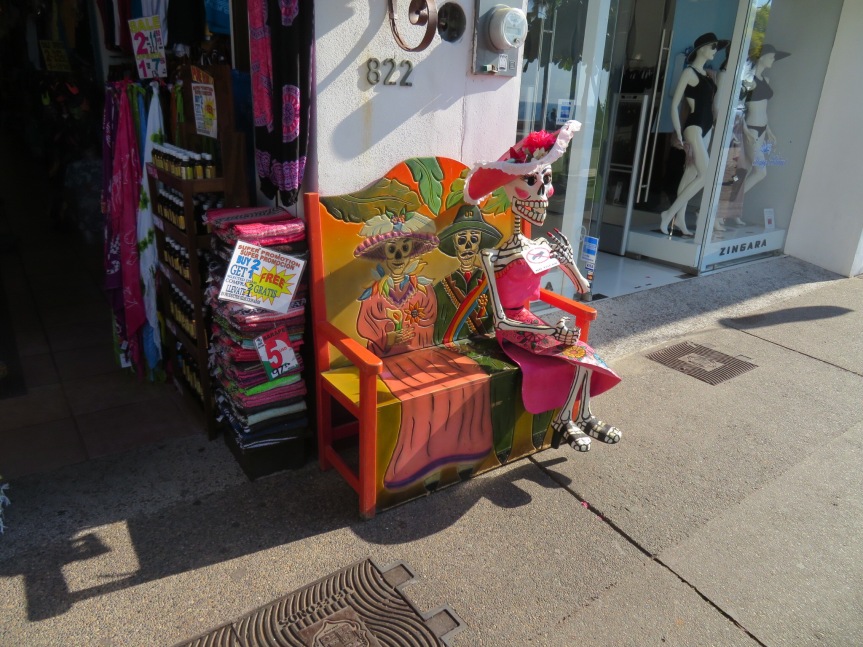 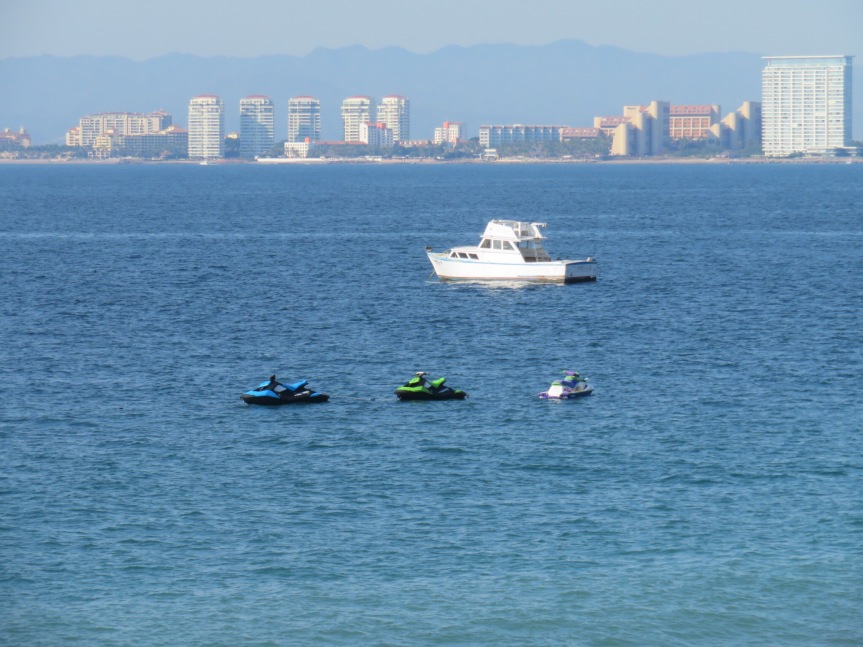 We continued on, checking out the art and statues that adorn the boardwalk and doing our best to avoid the vendors that are a constant presence throughout the city. The Christmas tree was being put together and the finishing touches were added to the sides. There will be a formal lighting event tomorrow night. 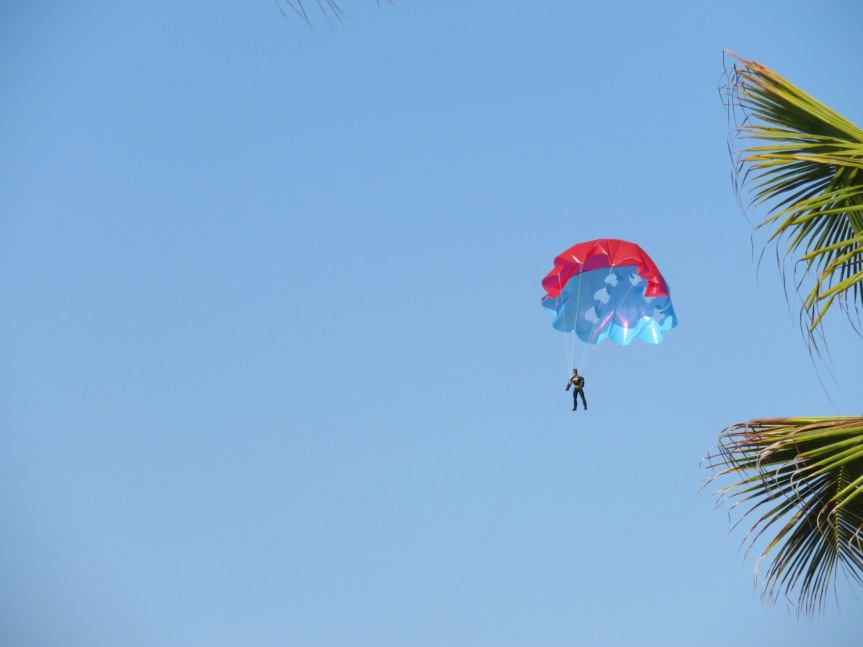 We took lots of pictures and wandered over to the cathedral near the romantic zone. Beautiful old building with a crown like structure topping off the spire on the top. We went inside and sat quietly for a few minutes giving thanks. One of the altar boys made a charades like gesture telling me to remove my hat, so I did.

It was getting close to five and we still had several blocks to traverse to get to the AA meeting over on Basilio Baudillo, so we picked up our pace a little and went swaying over the Rio Cuale on the hanging rope bridges they have in place to get across. Very colorful and animated area of PV. We’ll definitely come back when we have more time and check it out.

We reached the Alano Club with a few minutes to spare and joined about six others for a meditation meeting. We meditated for about 25 minutes then most of the group shared afterwards. We met some really neat people and it was good to be at a meeting. 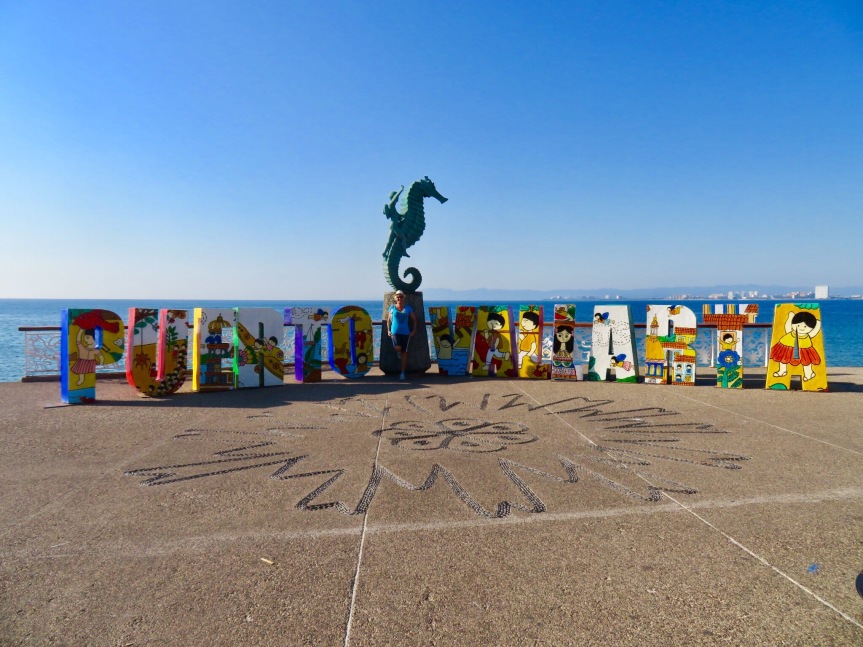 We walked back down to the malecon as the sun was setting and joined the throngs of people hanging out at the beach. Some people were swimming, others fishing and many more just relaxing along the boardwalk taking it all in. A whale was breaching in the distance and boats were plying the bay. Musicians were playing and everywhere people were trying to earn a buck either selling something, singing or doing some kind of act. 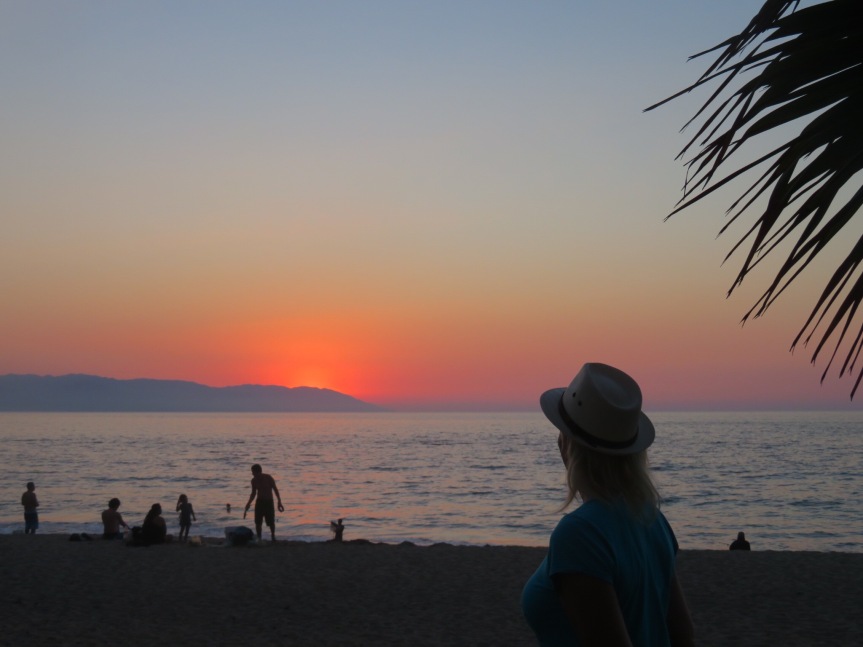 An older guy we met named Mike told us to catch a bus to the Walmart and from there change over to one to Bucerias. So after the sun went down, we walked up a few blocks and hopped on a bus that had Walmart among other destinations painted on its front window. The plastic seats gave resounding jolts as the bus bounced along the cobblestone streets. The driver looked about 15 and he kept stopping and stopping and packing people on like sardines. I had a large woman’s belly pressing into my face as they kept shoving their way on until I couldn’t even see out the front. 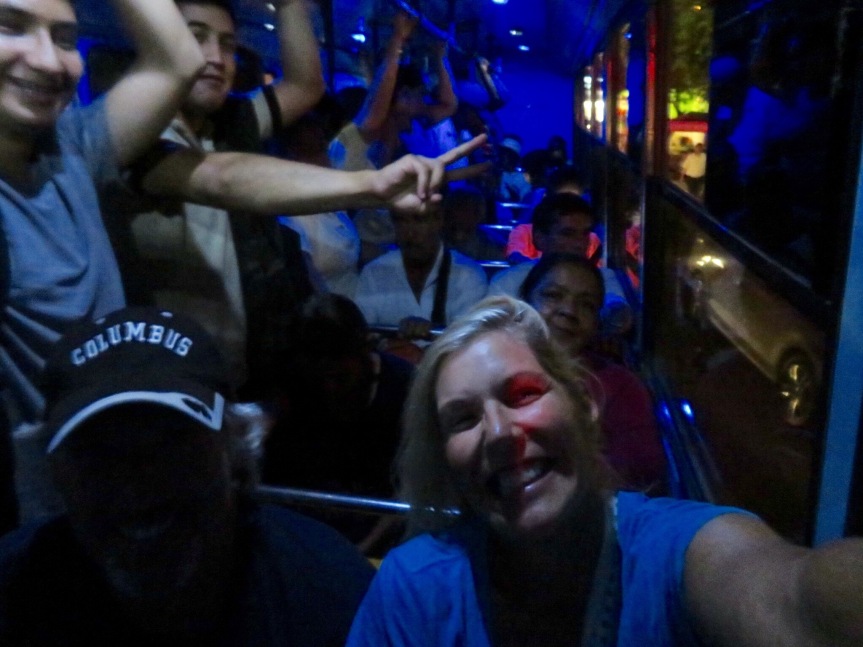 We either passed the Walmart without seeing it or the bus never went by it at all but we soon found ourselves driving inland away from the coast highway we should have been on. For a moment I thought it might just be doing a bypass to let people off, but a couple of teenagers realized we didn’t belong and asked us where we wanted to go. We said Walmart and they told us we weren’t close. We were headed to a suburb called Ixtapa. We hopped off and decided to take a taxi. The guy said 150 to Bucerias then quickly upped it to 200 before we got in. We didn’t care at this point, we just wanted to get back to Bucerias.
When we arrived, I gave him a 500 and he gives me back 250 claiming we agreed to 250. I argued for a while but it was going nowhere. I could get in a scuffle and wind up in jail or be burned for 50 pesos ($2.50). We’ll let karma sort this one out.

We tried to find the Bucerias 8:00 AA meeting but it wasn’t where it claimed to be. We walked back to the plaza where a big band was playing and I ate a couple of little tacos al pastor then we caught a Bucerias cab back to Los Arroyos. The dogs were happy to see us having spent 8 hours inside. We walked them around the grounds and let them get some fresh air. Pretty fun day out on the town. Bus riding is always interesting, you never know what you’re going to see, but if we’re going to hang for any length of time we might think about picking up a cheap car.