We started our day with a walk into Bucerias. We walked down the dirt path until we arrived in the old part of the neighborhood where the Spanish speaking AA meetings are held. We walked through the back streets dodging sketchy looking dogs and found the building. Meetings are at 8 in the morning. I’ll come check on them another day.

We continued down to the main frontage road for hwy. 200 to hit the bank and take out some pesos. We passed some leather repair guys who were modifying Walmart imitation boogie boards by sewing together the layers to keep them from coming apart. The local kids figured out that reinforcing them before they become delaminated will keep them usable longer. The guy had a pretty good sized stack he was working on. 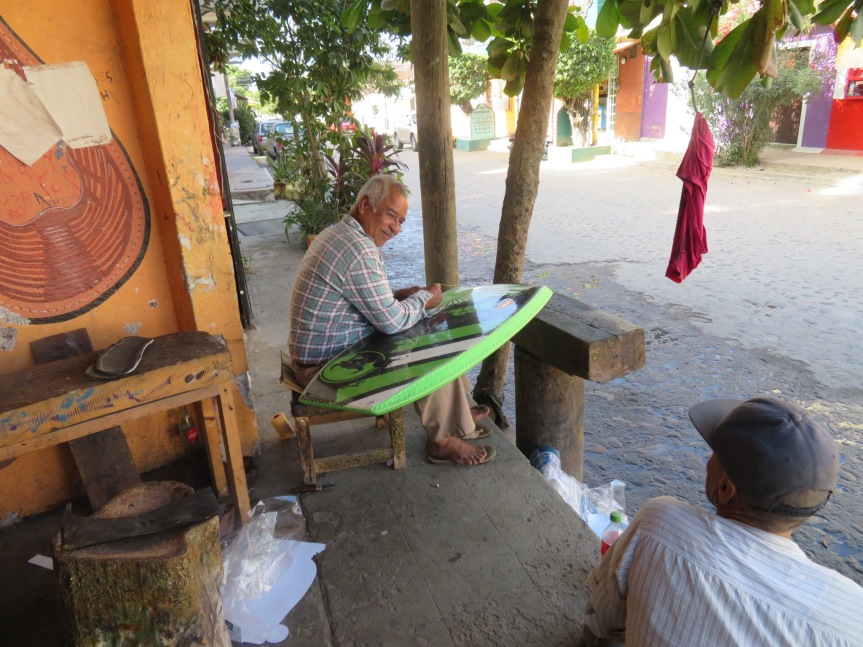 On the way to the bank, we came upon a veterinarian and stopped in to ask about heartworm medication. Dr. Rodriguez set us up with the meds and gave the dogs some water. He started his career in Tijuana then opened this clinic in Bucerias. Clean and modern facility. I walked the few doors down to the bank and got some more cash while PJ stayed at the vet.
When we turned the corner to head back through the barrio to return to Los Arroyos, we came upon a little stand selling gorditas. A mother and her three young daughters were cooking up some tasty offerings. We ordered up a couple of gorditas and sat on the raised sidewalk across from the stand so the dogs wouldn’t be a nuisance. One of the little girls came over with a broom and swept the sidewalk for us. They were way cute and brought our gorditas over and set us up. Breakfast of champions.

Further up the road, we came upon the woman with the watermelon truck. I asked PJ if she was sure she wanted to carry it the mile and half back to Los Arroyos. She was for it, so we had the lady pick us out a small one. We paid her 15 pesos and took turns carrying the melon along the dirt track back to the pad. A nice long excursion for all of us. The dogs were mellow for the rest of the day.

We went to the office to print out PJ’s boarding pass for tomorrow. I can’t believe it’s time to send her off to Rhode Island already. Where does the time go? Met the new neighbors. Nice couple from Salt Lake City here meeting up with some of his old pals from Ohio. Cute little girl. She got to meet the dogs and got a few licks for her effort.

In the late afternoon, we hit the pool and did a few laps and enjoyed the evening quiet. We were the only ones around. Watched a spider building a web while PJ took a hot shower at the pool house. We ate leftover rice and veggies. PJ was busy taking care of all of the last minute details for tomorrow’s travel.