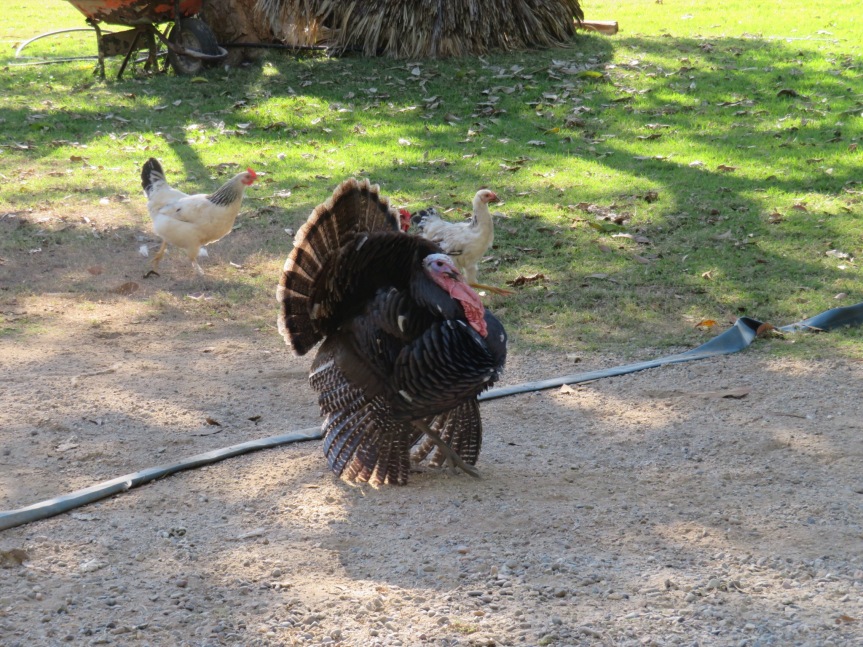 Yesterday, we took the dirt road less traveled and decided to explore down a country lane across the highway from Los Arroyos. The pineapple fields gave way to corn and some other kind of vegetables as we continued farther into the back country. We passed a few small farms including one cute little orange house from which a wave of growling dogs came pouring forth. We managed to scare them off then the ducks took over the attack. Not really, the ducks just stood along the canal trying to look intimidating.

A little further on, we came to the balnario, an event center featuring a large pool with fancy curving slides. No one was swimming but I was curious as to what they are about. We went in asking what it would cost to have a party at their facility. Fifty pesos a head to use the center. They had a large barbeque and an industrial stove and food prep area. Just bring your own propane gas canister, food and charcoal. 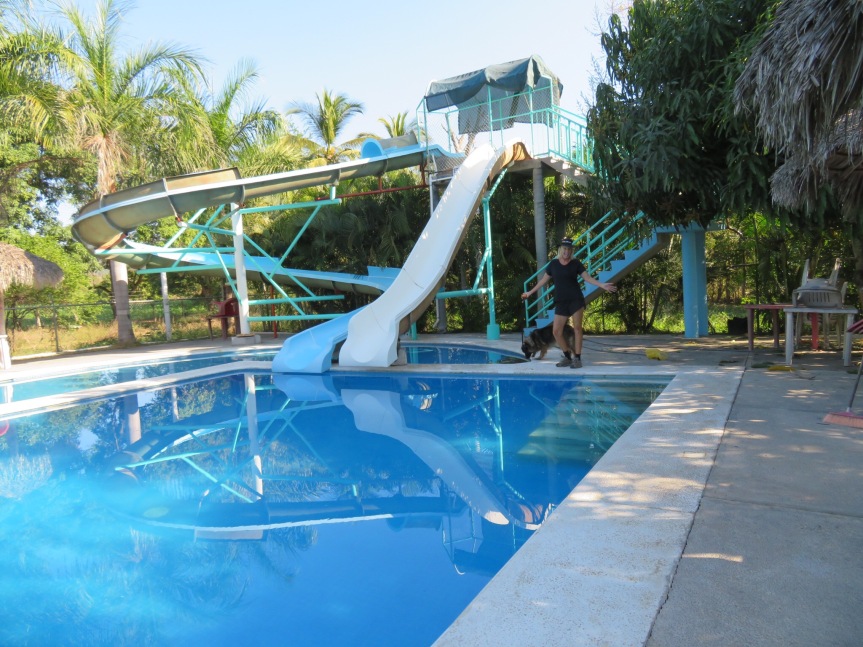 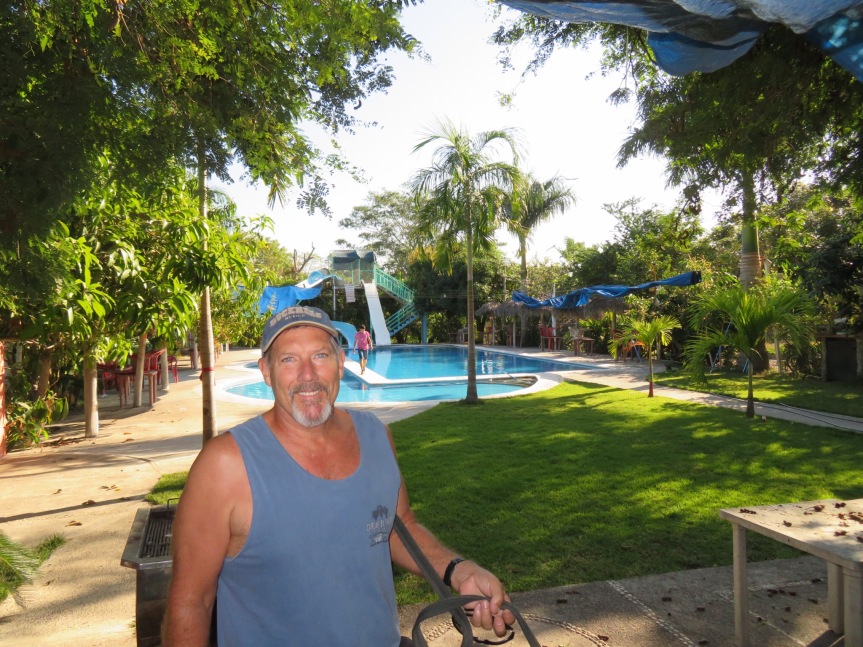 About a quarter mile further in as we thought the road was coming to an end, we came upon a subdivision where they were selling lots. The water and electric poles were in place but it would another six months or a year before power actually made it out there. Seven grand would set you up with a lot amongst the trees. The area featured lots of colorful birds and peaceful country charm. 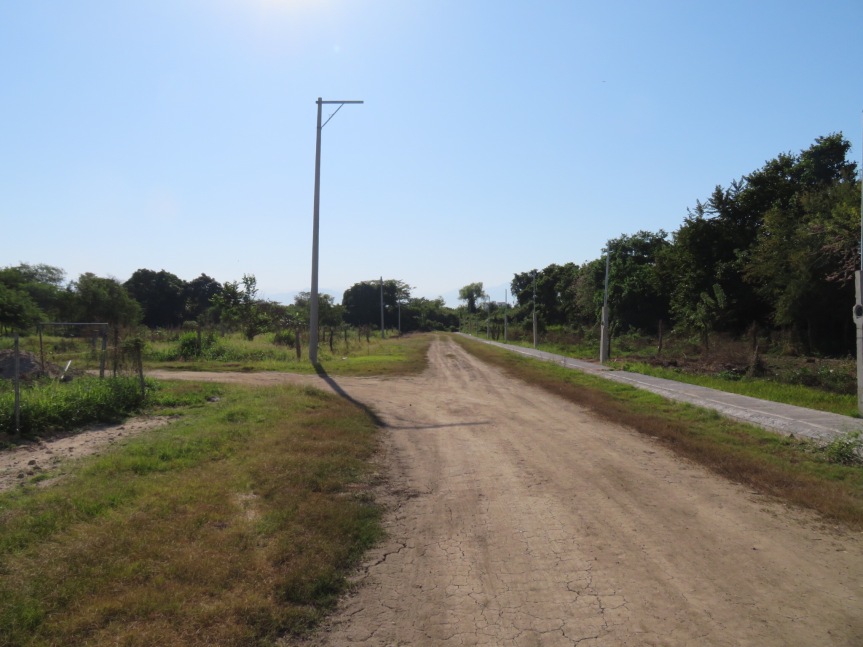 Koda was about played out so we headed back to the house to give her some air conditioning and water. The maid showed up to clean the house, so we made our way over to the gym and did some stretching and working out while the casita got a little freshening up. PJ and I caught the five o’clock shuttle into Bucerias and jumped out at the Rincon de Ensenada for fish tacos. 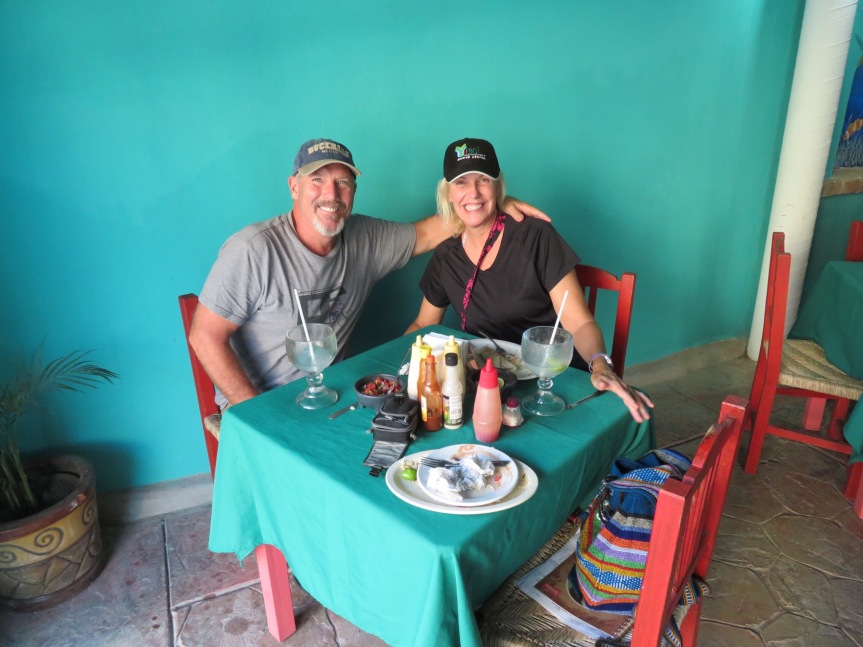 The town seems livelier every time we go in. As we sat in the seafoam green restaurant, we watched people going by on foot, in taxis and driving colorful little golf carts to wherever their entertainment for the evening might be. We sampled a variety of fish and shrimp tacos, empanadas and burritos. Delicious stuff.
We hiked on over to the AA meeting in the arroyo and PJ got tagged to lead the meeting. Afterwards, we walked over to the plaza where an overly load band was belting out brass music from the bandstand. We didn’t stay long before catching a cab or home.

Today, Friday, was PJ’s second day of Spanish school. We rolled up in the shuttle and had a bite of breakfast at the Tuc Restaurant. At eleven, we stepped over to the Academia Washington and spent the next two hours studying Spanish. The class had picked up a few new students so there were three more people today. The highlight was singing Guantanamera like kids at a kumbaya camp. After a couple of rounds with the music on, the teacher cut the recording and the class sang it acapella. Surprisingly, we sounded pretty good.

At one, we raced to the curb to catch a cab downtown to have lunch with our friends Steve, Bryce and Arlene. We flagged a cab we saw pulling into Terralta, but when he made the u-turn to come around and pick us up, some cute young girl stepped out from the center and hailed him. He must have thought she looked more fun to chauffeur than us so he scooped her up and they headed off toward the highway. Shortly after, another cab pulled up and it was our bro’ Adan from the other day. He drove us into the Golden Zone and we met our friends for a leisurely meal on the verandah of a casual restaurant.

Overfed and ready for a nap, we caught a cab back to the house and walked the dogs. We rested up for a while then caught the five o’clock shuttle down to Verano and met our AA friend to go to the meeting in Puerto Vallarta. Traffic was light and we breezed on down the road. We arrived with time to spare, so we grabbed some baked goods at the bakery and then hit the Alano Club for the meeting. More and more people are showing up for the season. There must have been 50 people in the room. Three people were celebrating anniversaries, so they each in turn shared their story, then the meeting opened up for general participation. An interesting crowd from all over Canada and the U.S. 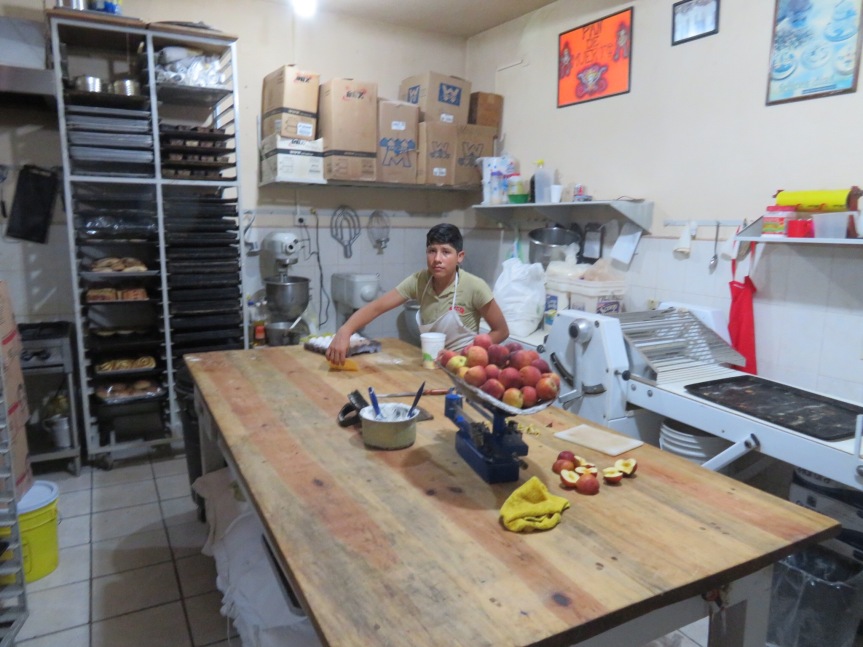 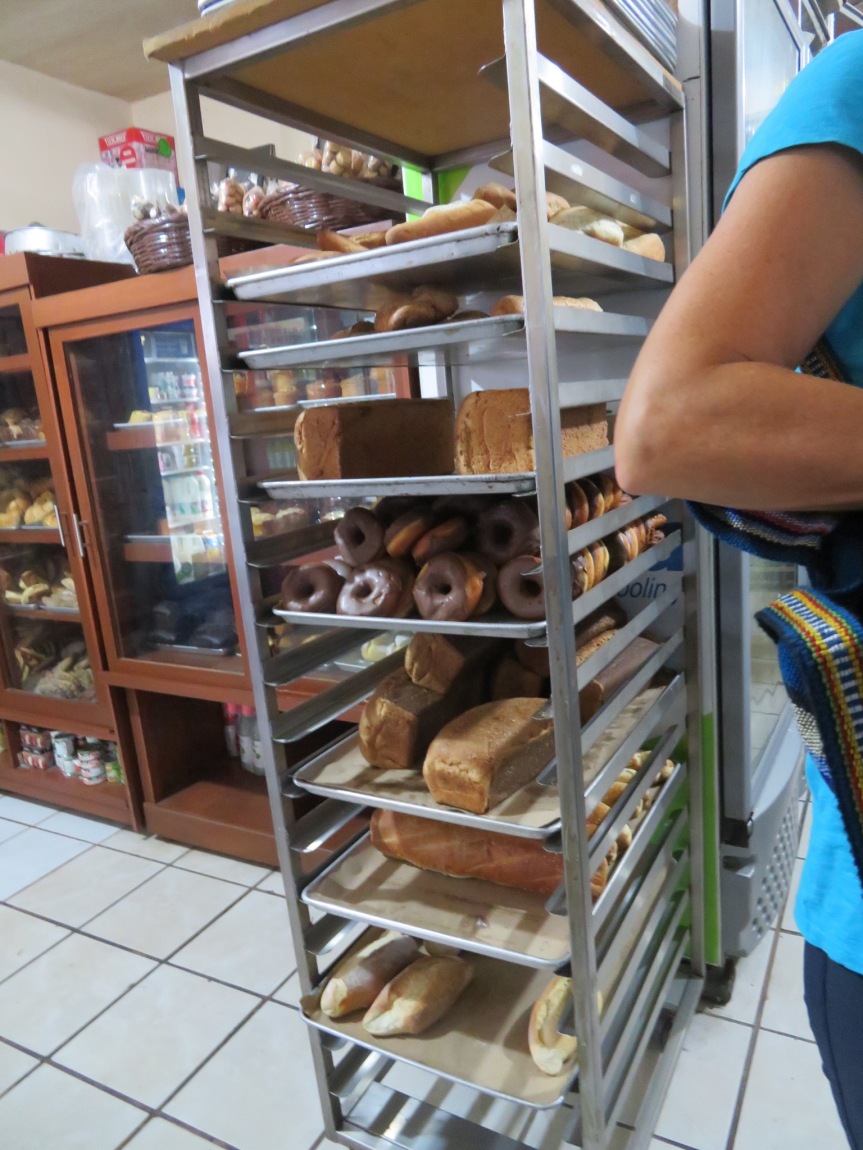 The ride home was easy with lots of conversation and listening to music as we traveled highway 200 back to Bucerias. At home, we released the hounds and did another tour around the property to give them some air. Los Arroyos is full up with the exception of the unit next to us. Even the airstreams all had people in them. Nice to finally slow down after a busy day.

3 thoughts on “Running Around Town”