We took it really easy Friday. Most of the day was spent reading and hanging in the hammock. PJ did some laundry and we walked around the gardens.

Alfredo has a friend, Cesar, who does body work so he gave him a call yesterday and Friday morning he came out and gave an estimate to paint the front door pillar where the white paint had bubbled and was flaking off. I’ve seen this on a large number of Chevy vans from the 2000s. Must be a factory thing where they were trying to save a buck on the paint job. While he was looking at that, I asked him about the bluish purple stripe along the bottom of the coach where the clear coat had disintegrated and was coming off in flakes. He gave me a price of 3000 pesos for everything and I told him to go ahead and get started. He and a worker got most of the prep work done that afternoon. 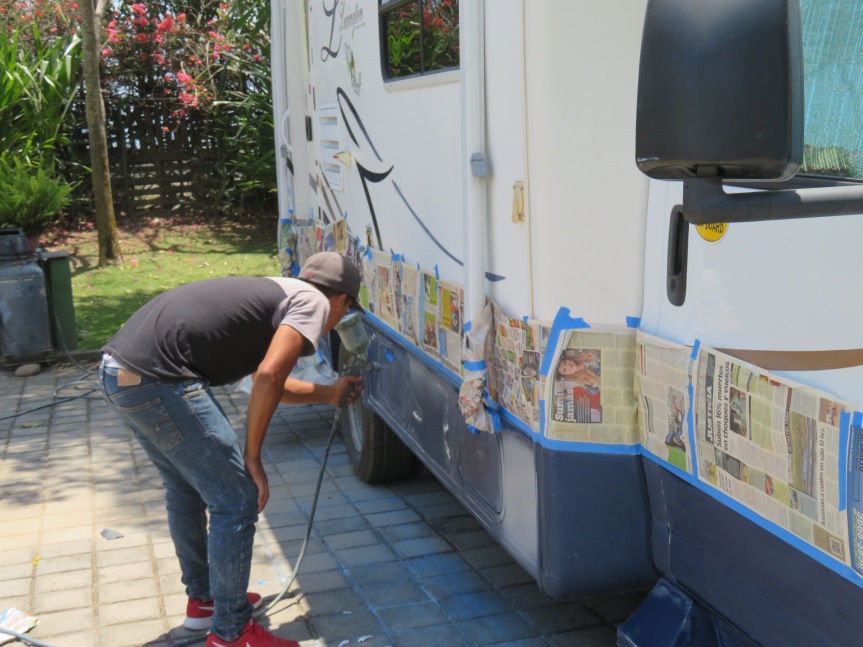 A quiet Friday night getting in three episodes of season two in the Game of Thrones series. The back is still tight so not much activity.

Saturday, we slept in. Took a long walk around keeping an eye on the papayas that getting close to ready on the west end of the property. Read most of a book and checked on the progress of the bodywork on the RV from time to time. By mid day it was primed and ready for paint. PJ rode the bike down to Coto Campestre and bought a batch of groceries from the mini-super.

Stopped by the pool and got a couple of beverages. Put my toes in the water. Nice and warm. By 5:00, Cesar was finishing up. He had to clear coat the entire door so the new white paint would perfectly match the original white. He was putting the final clear coat on the blue as we were leaving for Bucerias. I went ahead and paid him, making a date for him to come back and polish and wax the entire motorhome on Monday.

Milton drove us into town and dropped us off in the arroyo. We enjoyed meeting with friends then did a little shopping on the way to the taxi stand. There is a cool bulk food and natural healing herbs place on the lateral. We picked some chia seeds and a little tin of the local balm made with peyote, cannabis, menthol and eucalyptus to rub on my back. Grabbed some fruit and drinks then an order of pollo for my dinner. We hopped in a cab, came home and had a look at the final product on Lexi. Looks good. Dinner and more Game of Thrones.

4 thoughts on “Lexi gets a Face Lift”