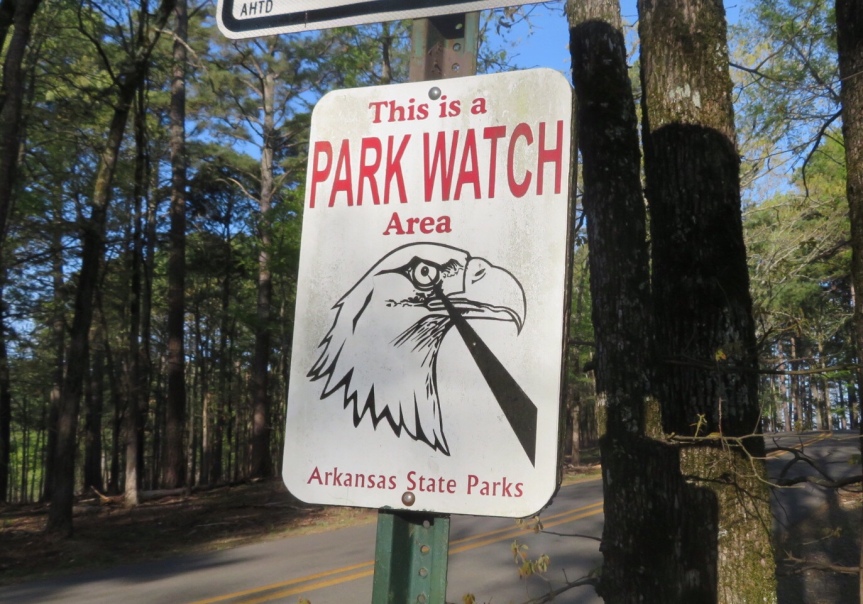 I had every intention of getting an early start today, but sometimes you never know what might come your way. Started the morning with the usual cup of tea. Carried the mug with me while taking the dog across the road to have a look at the boat ramp area. Lots of early bird boaters putting their watercraft in at the dock trying to beat the wind.

I went back and sat outside with a bowl of cereal when an older guy from Texas came on by to ask me about the heart with wings logo on the RV. Danny, my new bud from last night had told him that I was all right so he felt at ease coming to visit. Jerry is a retired fireman from Dallas up here in Arkansas for a few weeks of lakeside camping with his wife. His buddy, with the matching fifth wheeler, is parked up waterfront next to him. Jerry figured with all of the Mexico travel and the winged heart that we might be medical missionaries who travel south of the border to heal the sick. Had to let him down and confess that we are just nomads looking for that elusive tropical paradise. We talked for quite a while on a wide range of topics then he took his leave and I got busy packing up the RV. 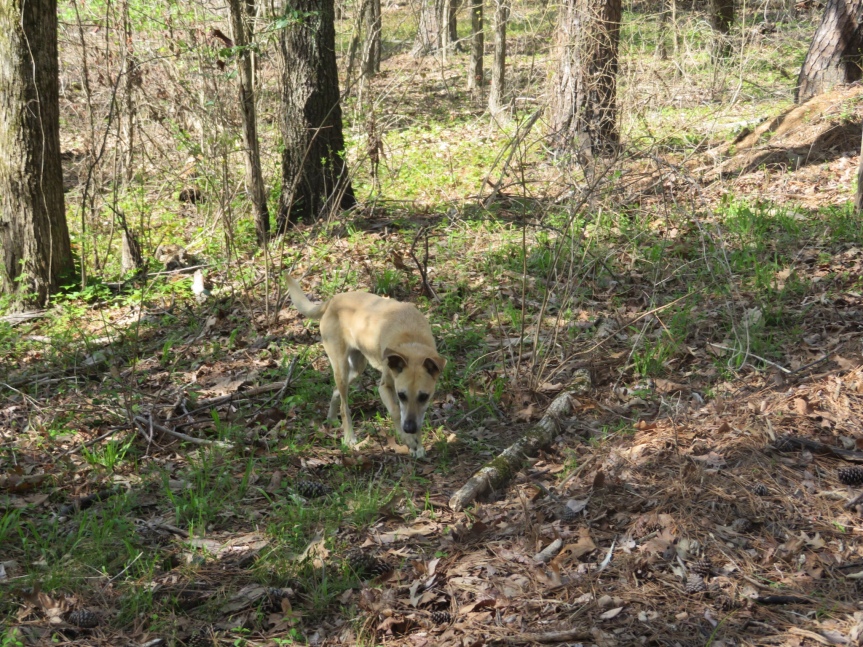 Cali failed at her outing earlier so I had to take her again so we hiked down to the far end of the park where the yurts are set up. It’s nice over there because there are no people and Cali can roam off leash. She’s been walking the heck out of me these past weeks. We covered the whole distance and still no luck, so sorry Charlie, into the rig and take your seats.

Another long drive where it takes me hours longer to get anywhere than what it says on the GPS or what someone else tells me it will take. I set the cruise on a steady 65 so I shouldn’t be off by a whole lot. We did stop twice, once outside of Little Rock after making it through the city. We ended up out in a fallow field where we could wander around with no one else in the vicinity. I made a PBJ and we continued on for another hour and a half then pulled off in Wheatley, AR to fill up on gas at the Mapco station. They had chicken tenders and red beans & rice so I broke down and got a small serving. We drove into the big truck lot across the road and tried walking again.

Between Wheatley and Memphis there was quite a bit of road repair going on. There was a number of shorter stretches where we’d get narrowed down to one lane only. Lots of rough pavement and super hard winds blowing forcing me to put full focus into keeping in my lane. Tiring job, must be the same for the big rigs. Just before Memphis, we hit a long road project that brought traffic to a complete halt. We inched along finally emerging into clear roads again only to hit some minor traffic getting through Memphis.

Finally made it clear of the city and exited onto some more rural highways and before long I was arriving at Meeman-Shelby State Park. The ladies in the office gave me site 12 which looked good on paper. I drove down and saw that I was the only camper in the loop. It was set down a little lower than the other loops up top where a few more people were staying. I backed in and the mosquitoes hit the windshield like a swarm of angry bees. They were hungry and out for blood. I had one window cracked and a few snuck in before I could close it up. I was afraid to open the doors. I drove back up and toured the other camping area. I stopped and checked out a loop with only two other campers. Didn’t see mosquitoes like down below, so I drove back to the office and traded sites for number 22. 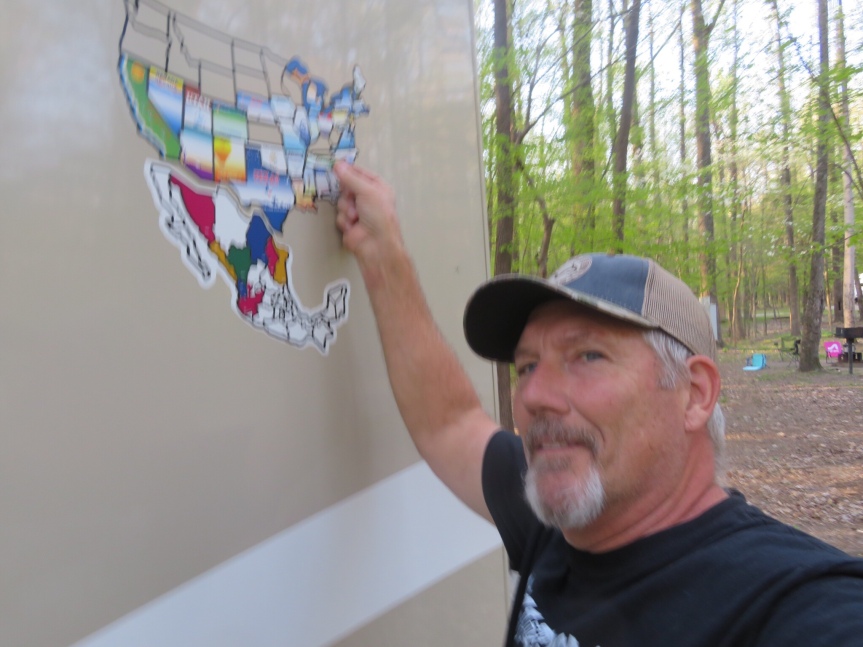 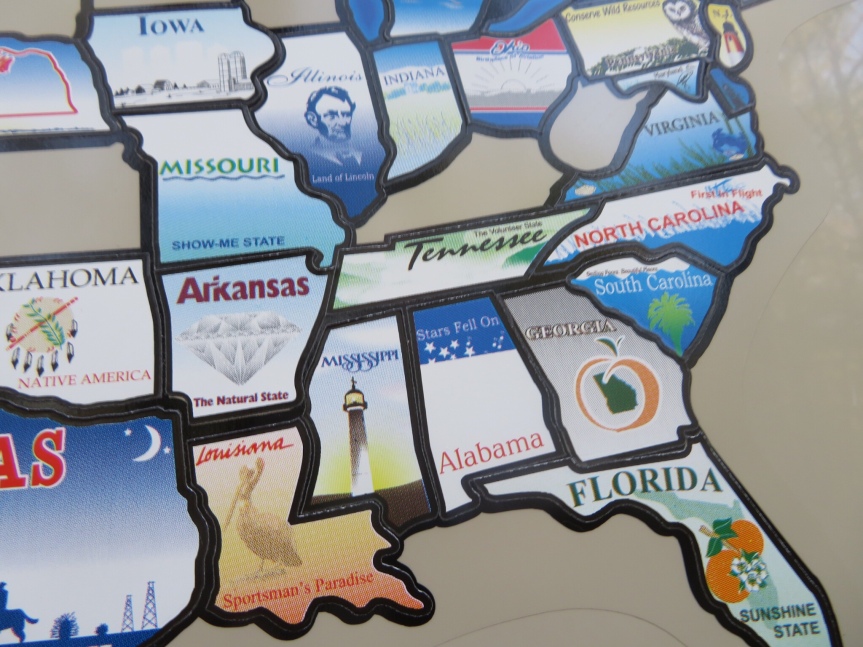 Arkansas and Tennessee, new states for the map!

When I was driving down, I noticed a narrow one way side road with an arrow saying Mississippi River. I asked the gals in the visitor center if it was worth going to see. They said it was cool but I’d have to make a big loop to get out of there. No problem. Cali was up for it, so we headed back and took the little road. The map made it look like it was right there close to the camp but we kept on going and going for miles. The road was getting narrower as we went along with drops off the sides or muddy bogs to fall into. There was no margin for error. Lots of branches had fallen in the road and some were hard to squeeze around. There was no turning back. Literally, it was impossible to turn around even when it converged with the exit road and became two lanes there was still no way an RV could turn around. It was cool though, a little adventure. I finally reached the turnaround loop where there was a big parking area and a boat ramp to put your boat into the mighty Mississippi. The river was maybe a half mile wide at this point and moving fairly quickly. We got out and walked around a bit then hopped back in and made our way back out. 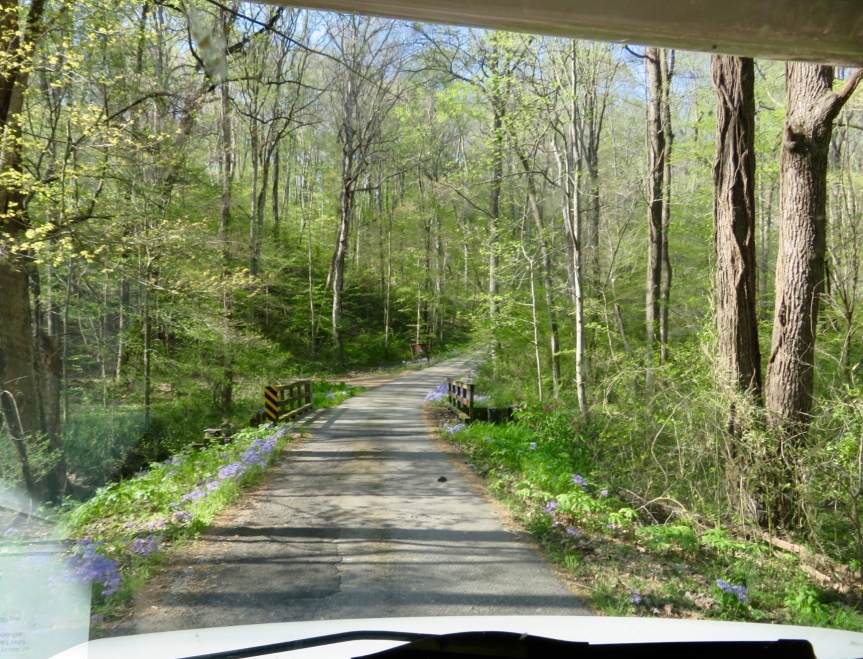 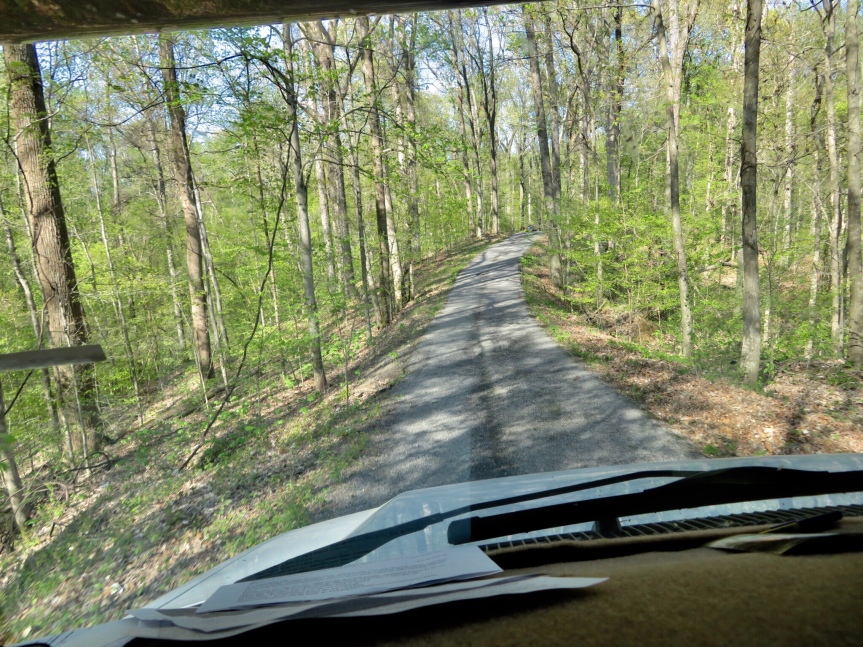 Not much of a road for RVs

This time we had to take a different one way track to the left that would bring us out on the other side of the visitor center on a big old clockwise loop. After miles of wandering in the bush, we ended up finally popping out in a little village and I had no idea where I was. I got lost a few times and I’m sure I took the long way home, but we finally made it back and were happy to set up in campsite #22. Went for a long walk and Cali seemed stoked to be here. Not too many people. Maybe one camper per every seven spots so we are spread out quite nicely. Lots of wind.

Ate some dinner and took a shower then we went for another tour of the campground in the darkness. Some of the empty areas were a little spooky with the heavy wind howling in the trees. Encountered our first fireflies of the trip. They were blinking among the trees as we made our way around the camp. Always get a kick out of fireflies. I get excited like a kid. Got back in the RV and Cali was having a panic attack. Gave her a pill and tried to calm her down. I sat at the table and petted her until she finally mellowed a little. The wind is sketchy. Laying in bed it is roaring through in gusts. Small bits of debris clatter on the roof from time to time. Hope no big branches fall. At this point, there is really no where else to head to. So, as the license plate says – “TRUST”. Tomorrow, they are calling for “severe” weather. Not sure what that means but I might hit an urban RV park near Nashville to sit that out.

One thought on “Tennessee Truckin’”