Haven’t been getting a whole lot of posting done lately. Being in one spot for such a long period of time leads me to get a bit lazy on writing about the day to day routine here at Hanna Park. But I’ve been receiving encouragement from my fans, all three of them, to keep things a little more up to date. Every day’s slightly different with different beach activities or hikes and this is such a beautiful tract of natural habitat that there is always another bird or varmint to discover. 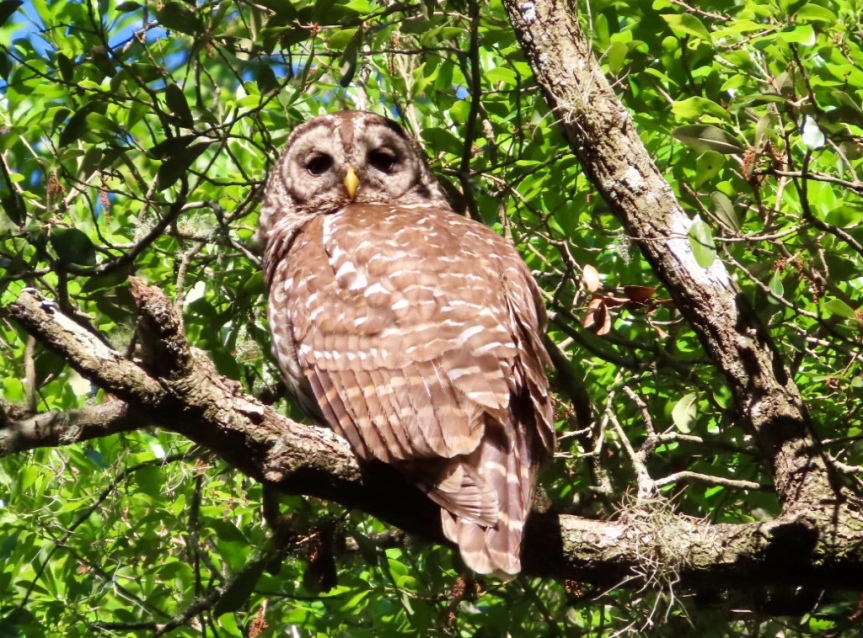 Our family of owls is still keeping me amused with their hooting cries back and forth through the trees. It’s amazing how they can fly through the dense forest never touching the tight foliage that they soar through.

Being such an undisturbed growth of old oak and palmetto forest, they call them hammocks here in Florida, things can get a little sketchy when the weather takes a turn for the worse. Back in December, a number of cars and RVs got damaged by falling branches when a storm came through so when yesterday’s forecast for severe thunderstorms and high winds arrived about half of the park fled like cockroaches when the lights come on. Me, I’ve got nowhere else to go. The rest of us hunkered down and sat it out. Some more cavalier campers were bar-b-quing under their flapping awning with no shirts on. Go Gators! 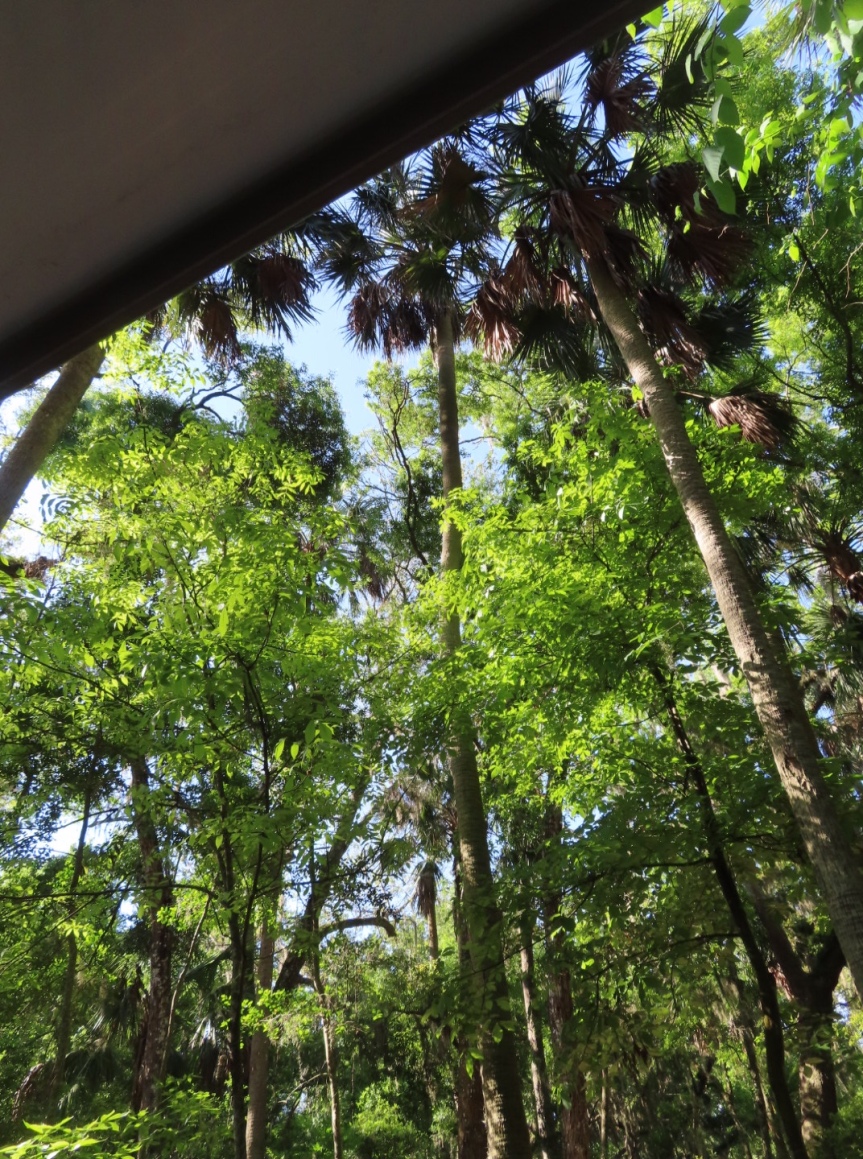 Yes, we are amongst the the big oaks

I started the morning out on the beach doing my shark tooth collecting walking meditation. It was awesome. A warm but windy (sand blasted) morning with just a few adventurous souls waiting for the rain and lightning to commence. No one else was foraging for teeth and the tide was just right so in short order, I gathered up eighteen of the little gems to add to our growing collection. A really skilled kite surfer was tapping into the high winds to get some massive airs in front of the main beach pavilion as his dutiful wife took photos with a high powered camera on the beach. By noon, the ominous darkness crept in from the west eclipsing the sun and turning day into night. Off of the jetties at Mayport a big funnel looking cloud was dropping tendrils of hard rain into the Atlantic. A lifeguard truck pulled up and told the few of us left on the sand to go take shelter, so I headed back to the rig. 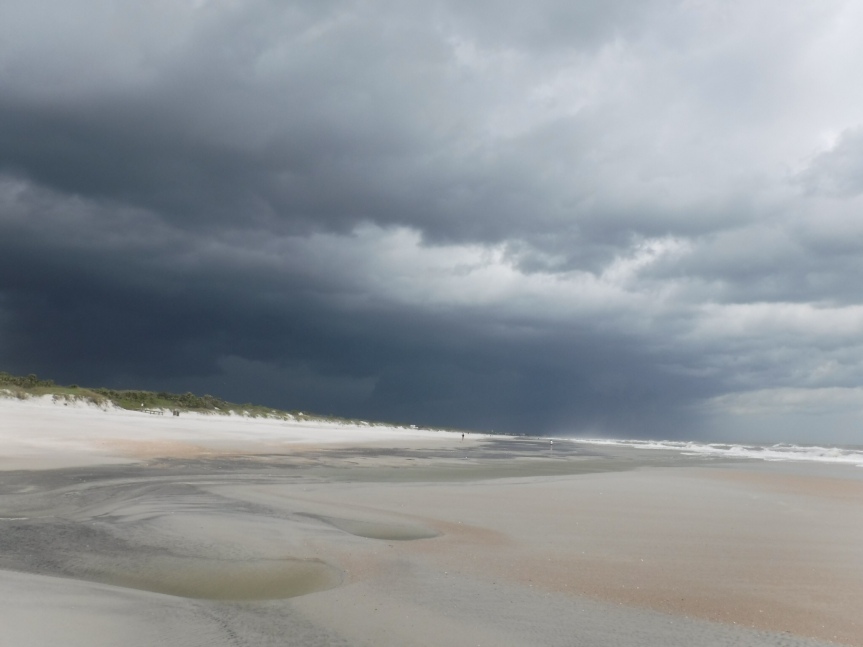 I tried to get Cali around the park for a quick walk before things got going but after the first peels of thunder all was lost. She was pulling for the barn so went inside and watched the action on the local news stations. It’s amazing how much they like to hype things up, talking tornadoes and gale force winds. When you listen closely, you can discern that they are talking about locations far to the north and east but it makes for good sound bites. One weatherman admitted after everything was over that the actual tornado risk for those areas was at 2%. 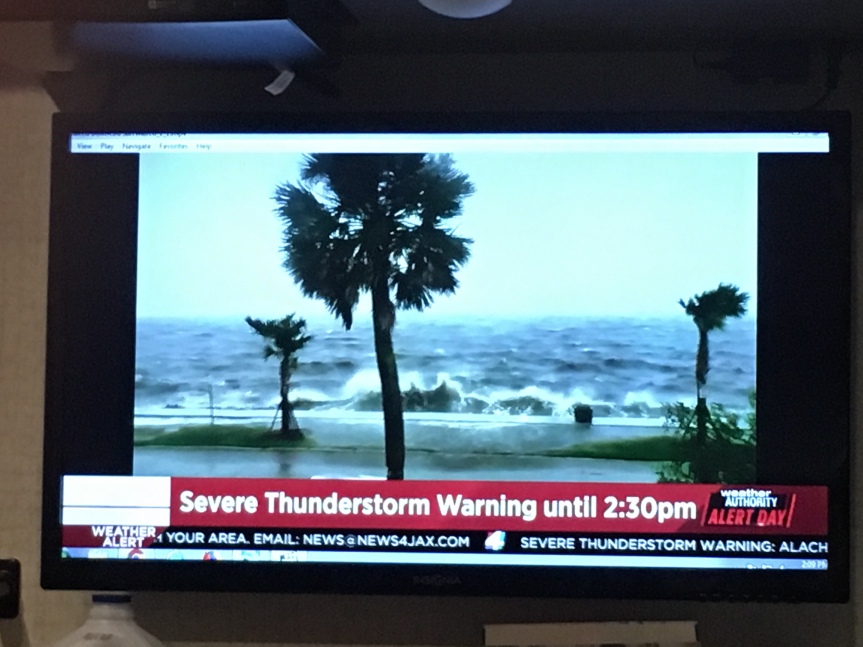 But it did rumble, flash, creak and crack for about four hours then as quickly as it arrived, the storms moved out to sea leaving behind some strong but not hazardous winds and a lot of water on the ground. So Cali and I survived and walked around to survey the park. A lot of smaller branches on the ground and all the places that puddle up were full of water making us change our route to dodge the mini lakes in the road. A quiet night inside as more campers started arriving late for a weekend at Hanna Park. There’s a surf contest this morning and the highs are going to push back up near 80 so I might as well get out and about. 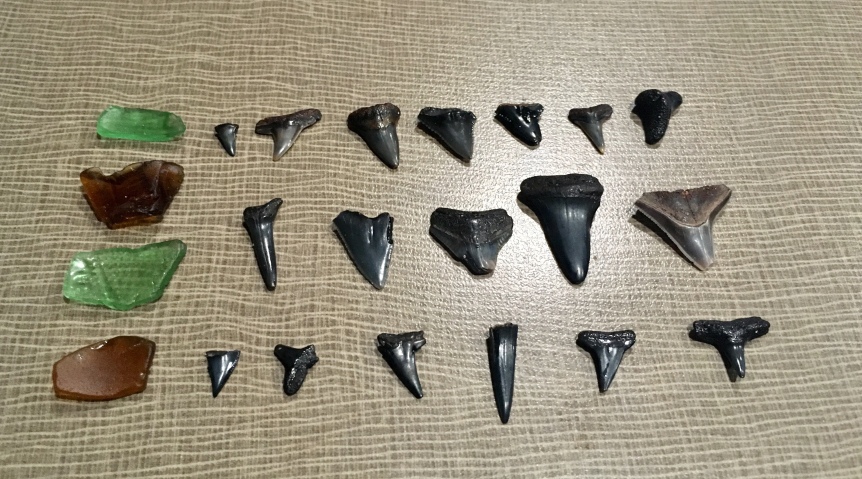 Now, I see shark teeth everywhere. Am I obsessed?!