It was a golden sunrise for a chilly morning. It was in the high forties as Cali and I did the rounds of Memorial Campground here in Washburn, WI. We had expansive lake views from the grassy bluff where the playground is situated. The lake looked glassy and a few boats were already out on the sparkling water. 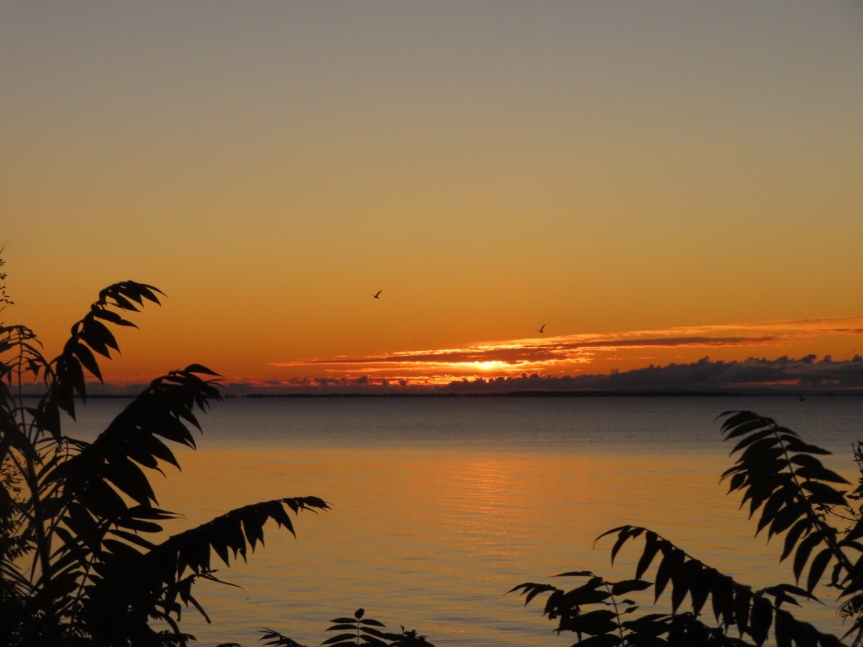 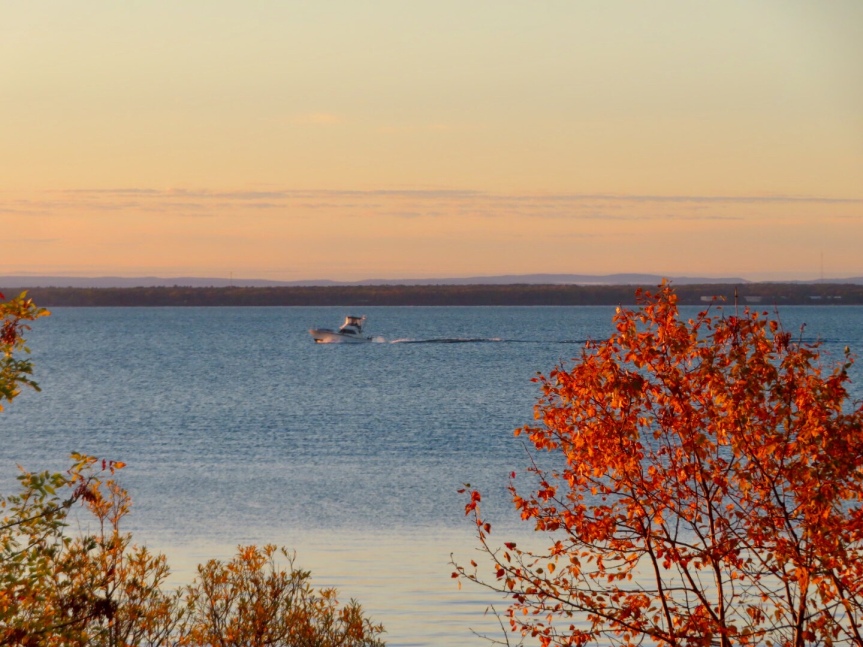 I decided to go for a paddle to see what lay beyond the pier just to our south. PJ opted out wanting to stay warm doing some yoga at camp. Cali followed me down the tree lined trail to the sandy put in and watched me stroke away from shore. Just don’t fall in and you’ll be okay. 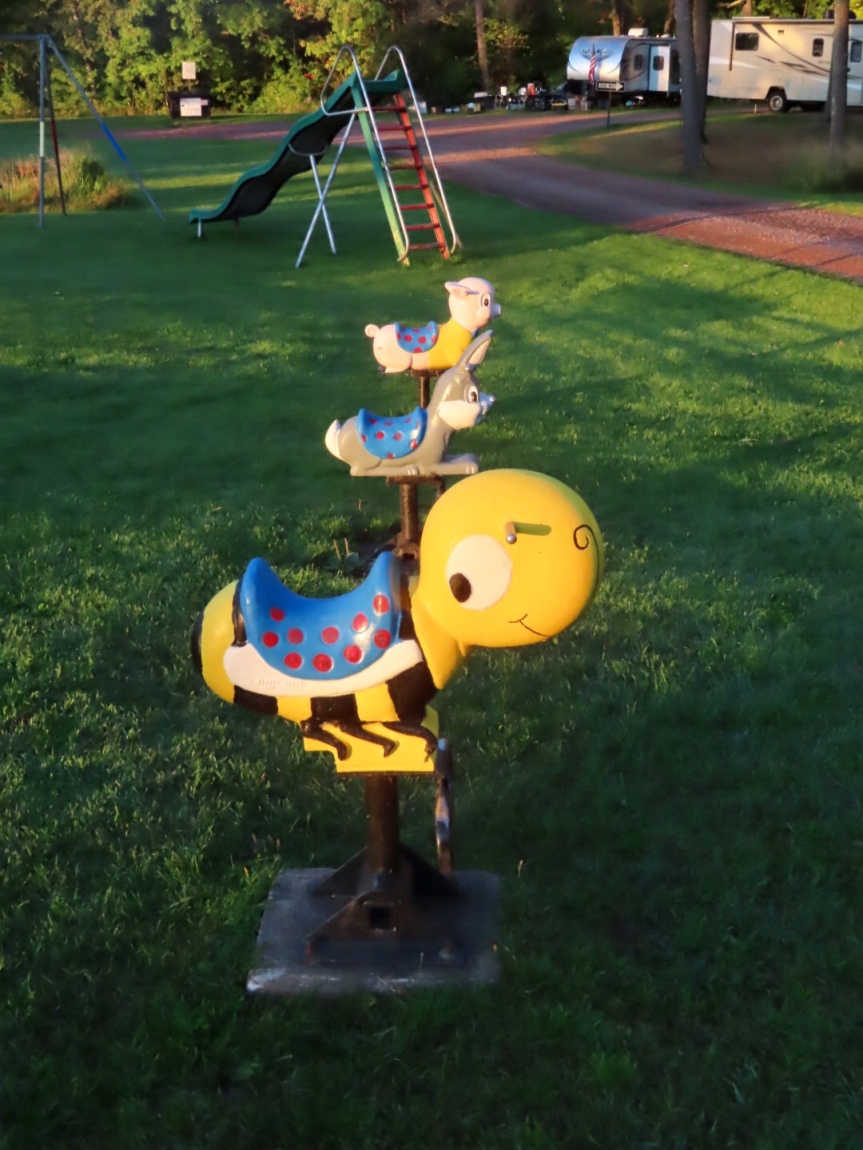 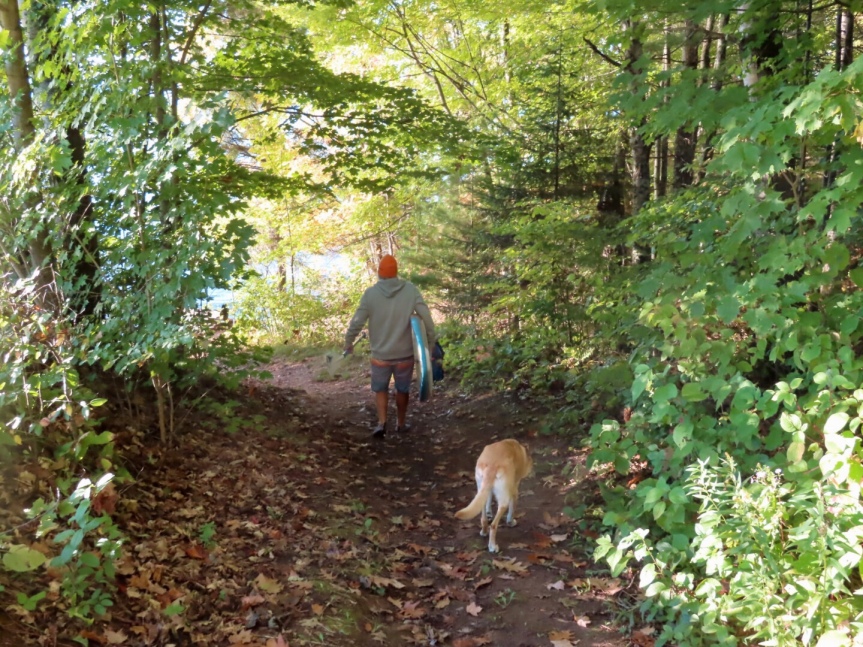 I worked my way past the small islet and over to the dock. A fisherman was looking over the edge into the clear waters of the lake. I asked if he’d seen any sharks, he replied that he didn’t see much of anything but cast his line out nonetheless. I continued on to the marina where I had to dodge a fast moving boat coming around the corner. 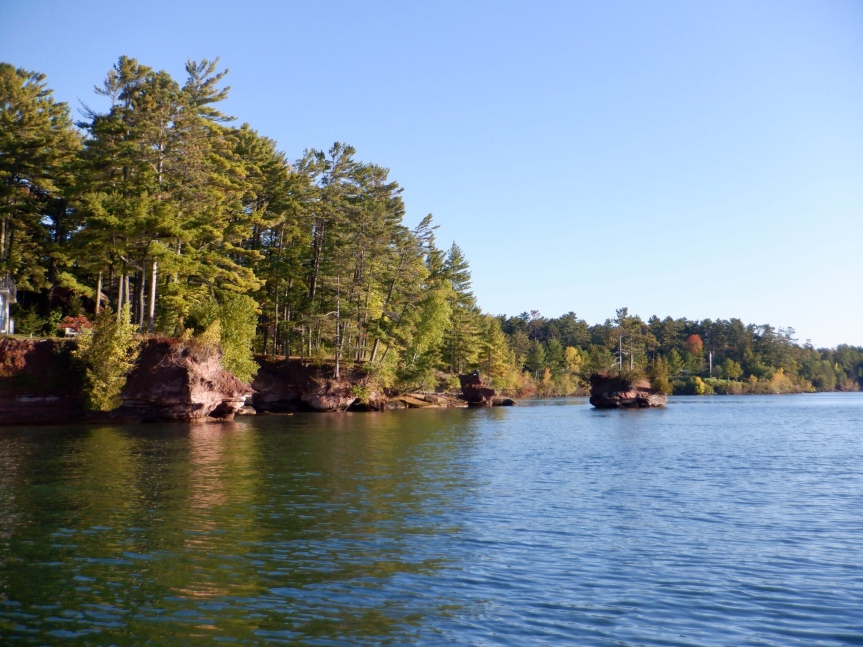 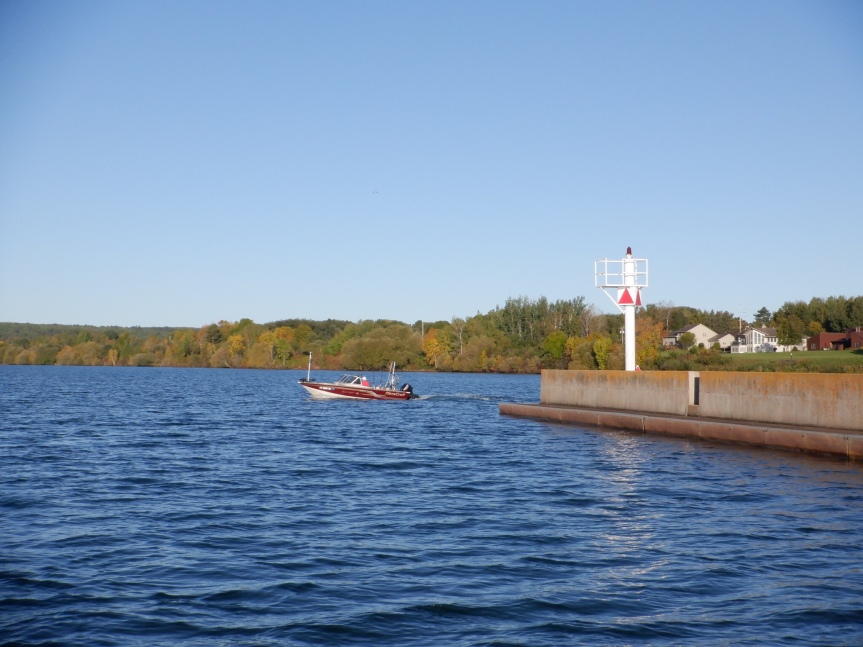 I went a little further past then turned around for the return journey. The sun was shining and was doing its best to heat things up. The campground was quiet up on the bluff. The weather kept most of the neighbors indoors. A few dog owners were out walking their pets but not much else was going on. 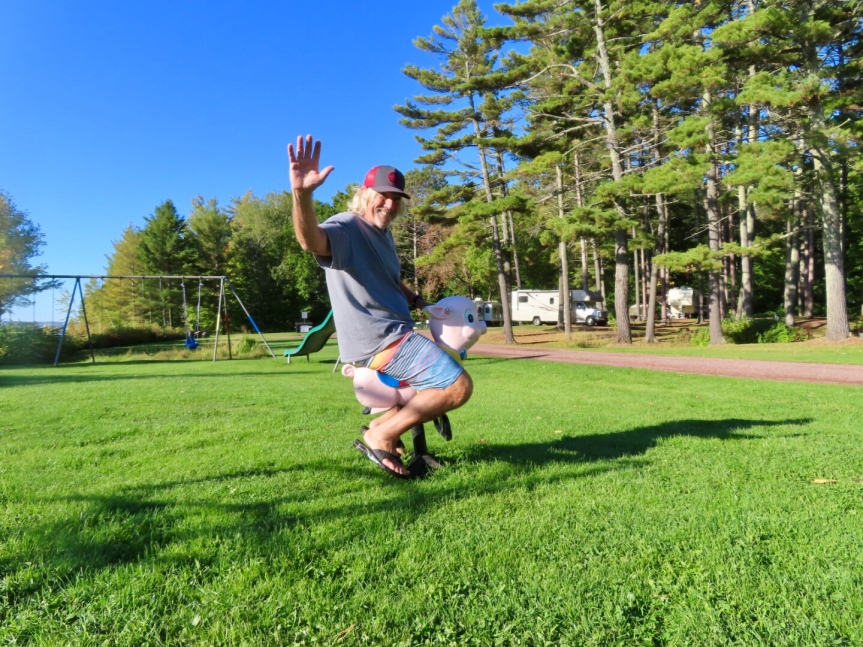 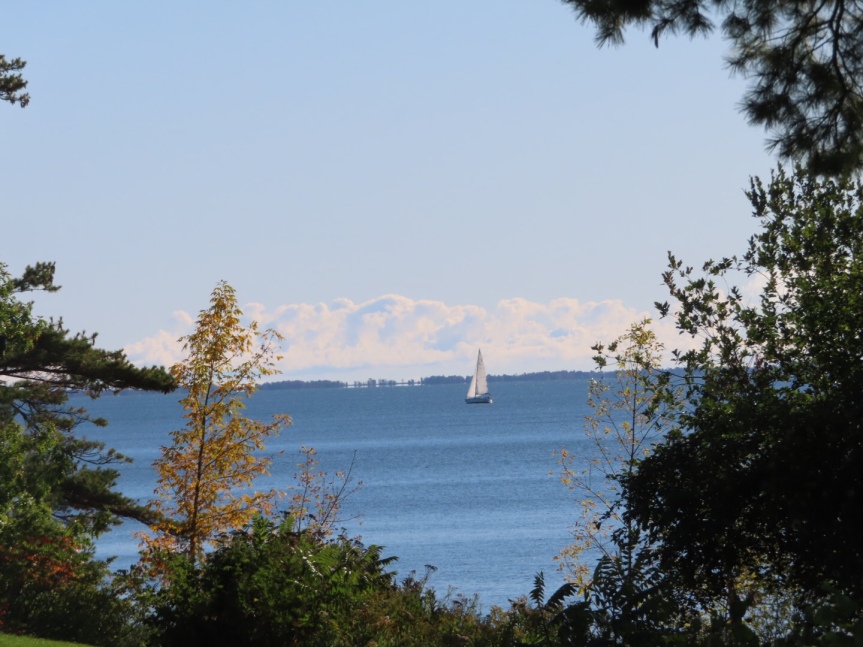 We hit the road and after leaving the resort areas we found ourselves in the slightly more industrial environs of Duluth, MN. I had heard about the hundred year old vertical bridge that lifts straight up to allow ships to pass underneath and wanted to have a quick look. It is in a downtown area across from the Aquarium. I drove down to the waterfront, but didn’t see anywhere to park an RV. I spotted some permit only parking at the hockey stadium and figured we’d roll the dice. 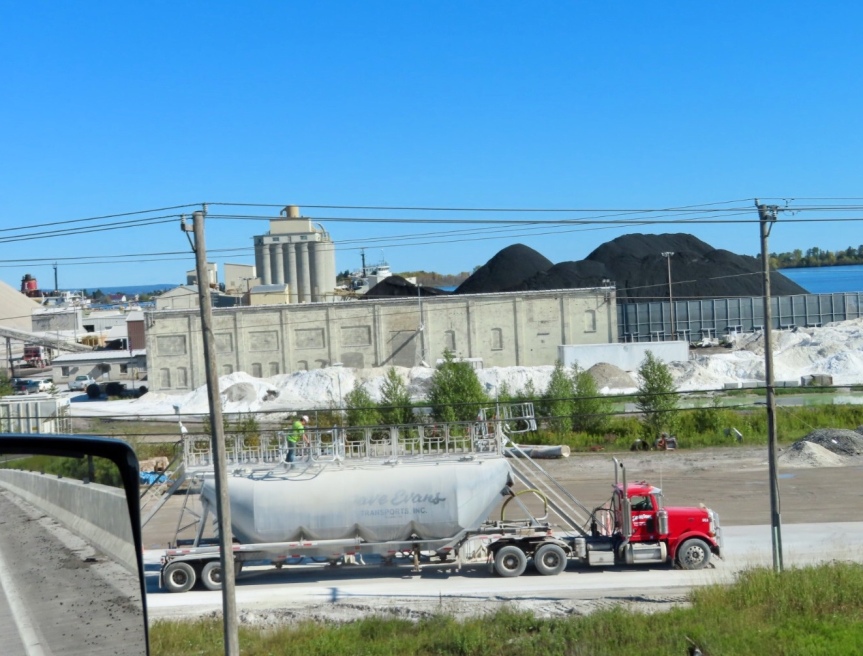 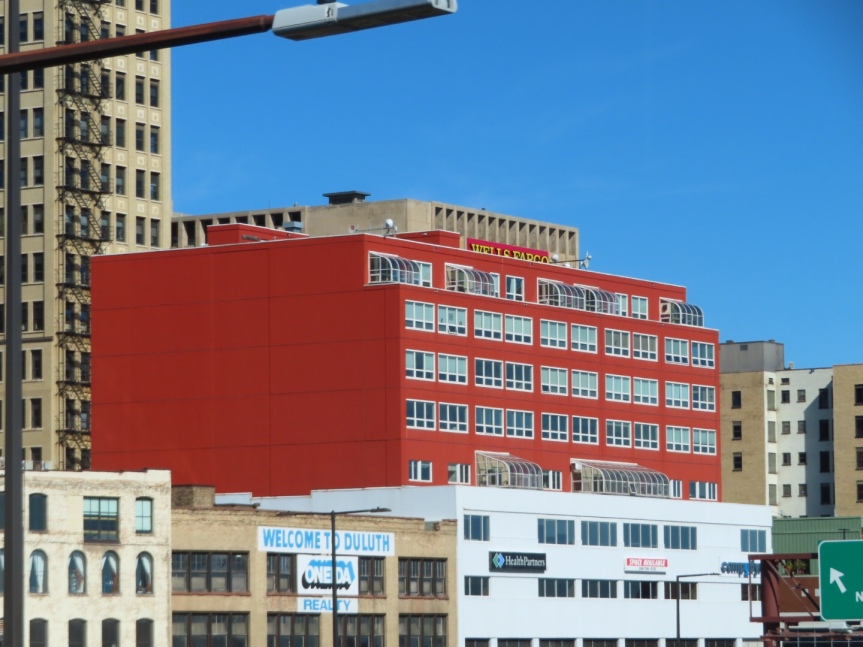 We took up a reserved space and walked over to the promenade and had a look around. A passel of tourists were disembarking from a harbor excursion boat as some young people were taking selfies with the bridge behind them. We walked around a bit but not too far so we were be able to check on the vehicles from time to time. After twenty minutes or so we felt like we were pushing our luck and got back on the freeway out of town. 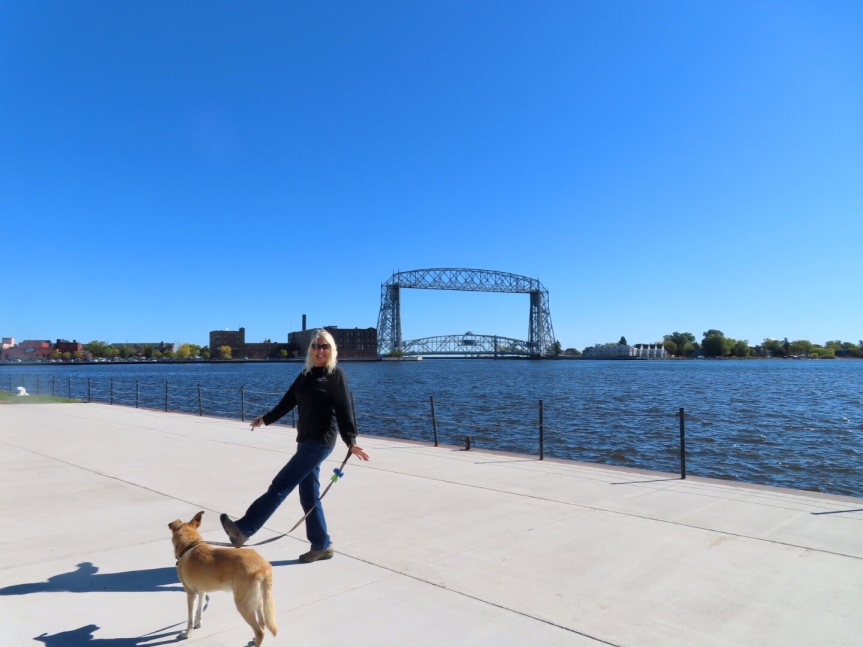 The two lane freeway only lasted a few miles then we were back on single lane country highways. A five hour drive including a few stops in rustic little burgs along the way. Water everywhere here in the land of ten thousand lakes. We must have seen half of the ten thousand along the route. 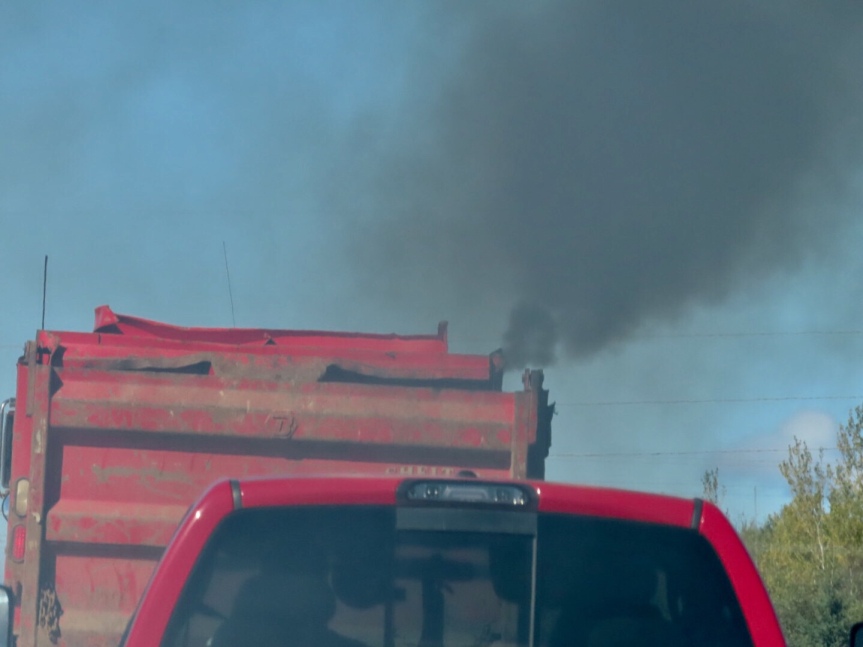 Don’t get stuck behind these guys 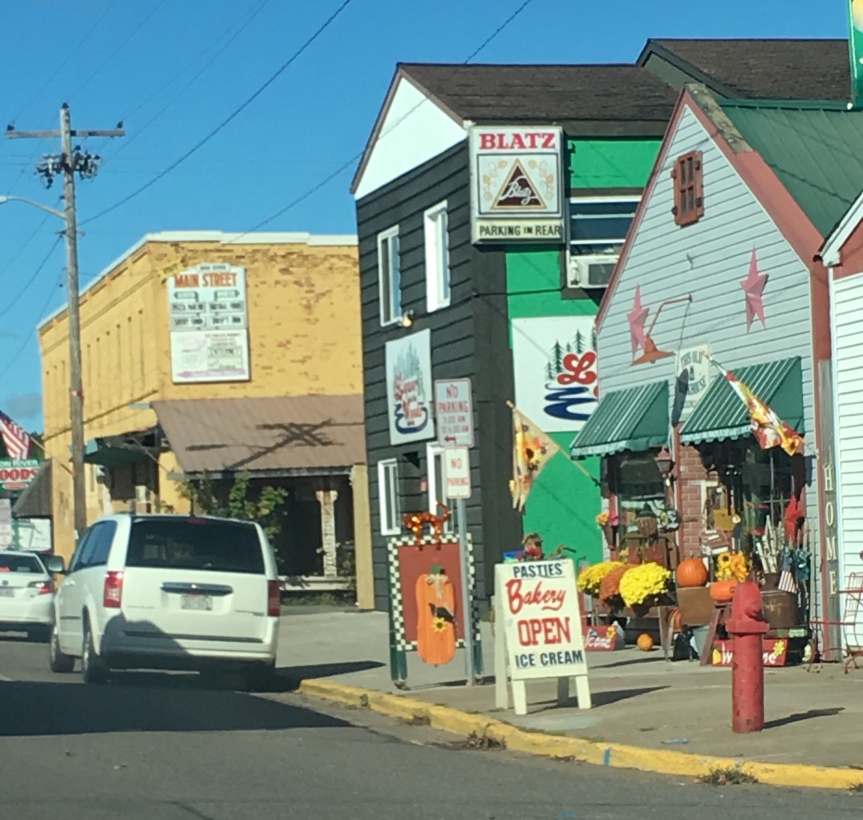 In the late afternoon, we rolled into Detroit Lakes and joined the few other campers that are still sticking it out at the campground. The wind was coming up and the temperatures were dropping. We started a fire and sat next to it warming ourselves for an hour or so. Cali was happy to frolic off leash on the large open lawn area out front.

We walked over to Lake Glawes, the small body of water we’re camped on. Not much of a lake and the weather doesn’t look like any water sports are going to be happening during our two night stay. Half of the campground is already shut down as they are winterizing the plumbing and getting ready to close for the season in a few days. 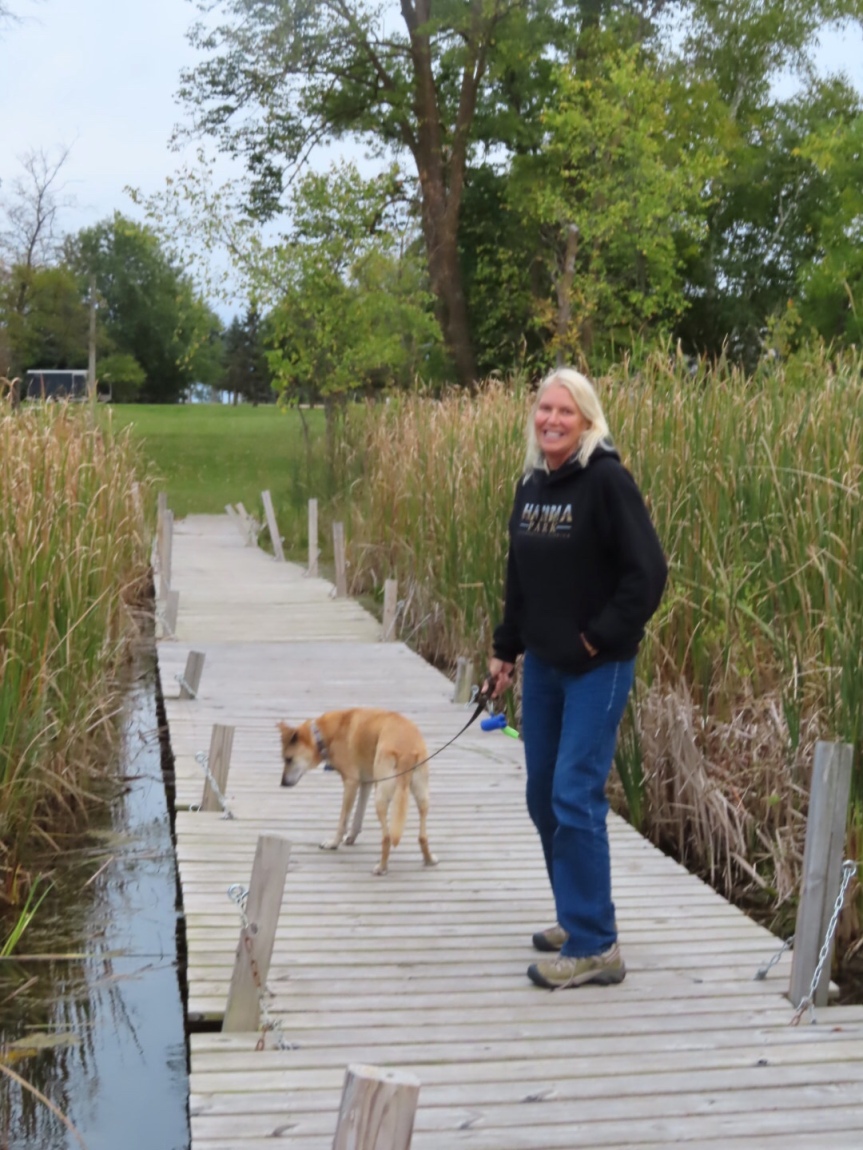 We strolled back over to our campsite where I was excited to cook up a few hot dogs on the glowing coals remaining in the fire ring. I had the pair of weiners nice and browned up on the end of my fork. I thought to poke it back into the fire just to get them heated through when one dog jumped off of its tines and ended up sacrificing itself to the fire gods. The expression on my face said it all. At least I still had one to bun up for the evening meal. A cold, blustery night with lots of rain in northern Minnesota.

Mmm..can’t wait to have these hot dogs for dinner 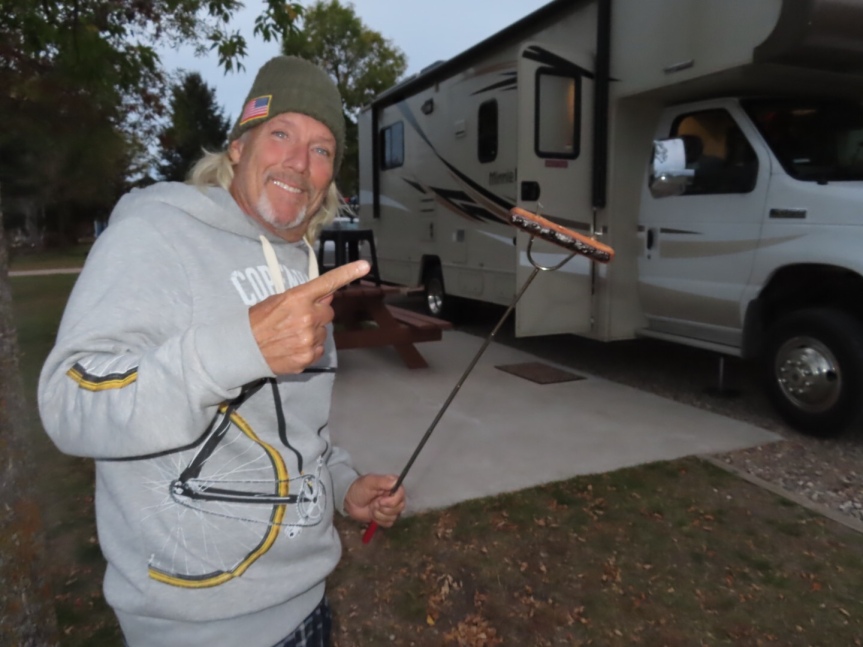 Hey, I still got one