We were sleeping hard this morning and could have slept in more but Cali wasn’t having it. We finally got going and decided to stay one more day at Sunset Bay State Park to paddle the bay out front and explore around the rocky islands that dot the mouth of the bay. We haven’t had any internet for the past few weeks having to drive to places where we can get a signal in order to post or make calls. It’s been both good and bad. We left Washington a few days back and crossed the big bridge into Oregon. We’ve now been in 47 of the lower 48 states! The only hold out is Kansas, but we’re okay with that. I was actually in Kansas many years back but it doesn’t get a sticker if the RV doesn’t cross the border. PJ’s been to Alaska which is the only state I haven’t been in, so we’re each scoring 49 out of 50 on the number of states visited, not bad on my report card.

Our first night in Oregon found us at Beverly Beach, a long and wide stretch of sand a few hours south of the border. Our big entertainment for the day was a stop at the Tillamook Cheese Factory. We toured the giant facility and sampled some cheeses. It was kind of like the Hershey Chocolate factory in Pennsylvania but without the amusement ride. The employees were behind glass being watched all day like zoo animals by us tourists walking around on the upper floor. Don’t be picking your nose, young man! The smoked sharp cheddar was the bomb and we dutifully left with a bag of cheese. 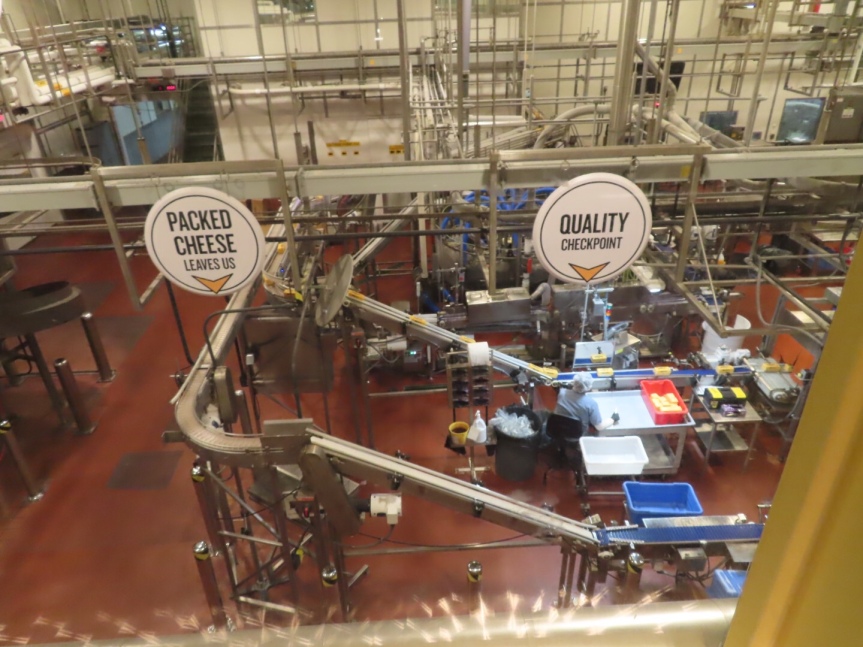 Beverly Beach was okay but the sun had disappeared and we weren’t really into it after being scolded by a ranger for not parking the way he would have preferred. It was a quick one night stand then it was down the coast highway to Sunset Bay just a short ways south of Coos Bay. The bay out front is beautiful and we are comfortable with the easy vibe of the place. So, an extra day was added for a paddle around the rocks. 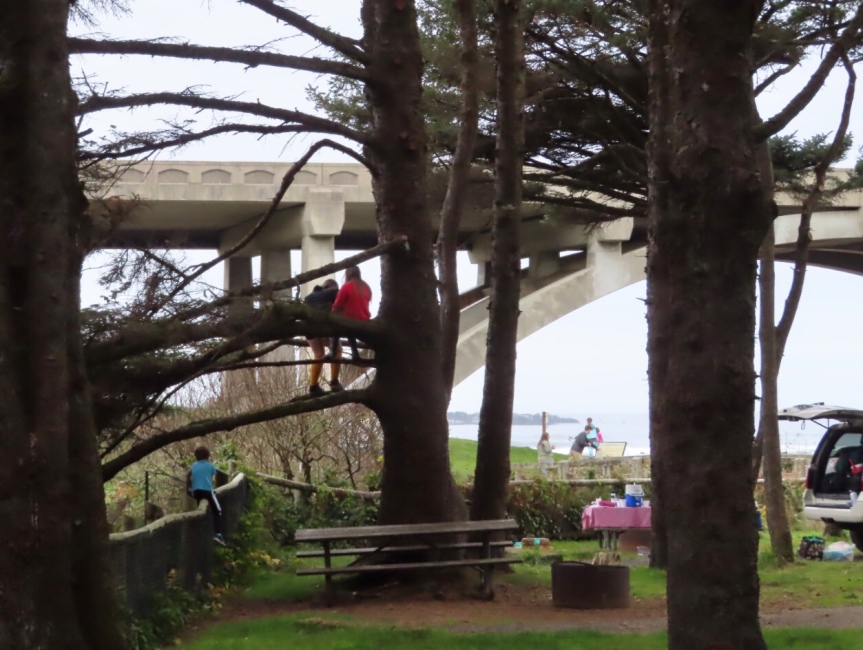 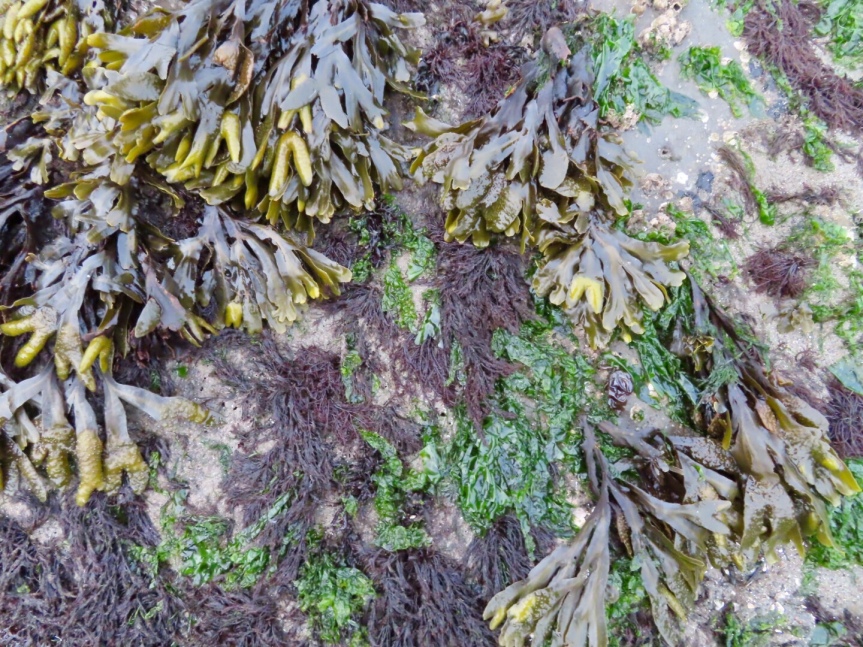 It was northwest coast scenic and our ever present seal escort showed up to keep us watched over. Past the outer rocks, the ocean got rough and the currents picked up some strength. We didn’t push it too far and returned to the gentler waters of the inner bay after a short while. 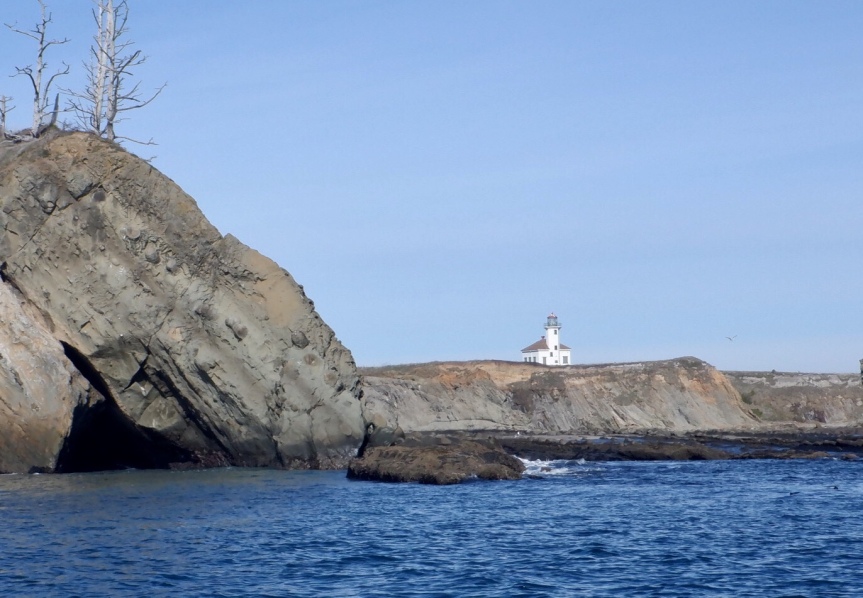 There were some tiny waves breaking right on the sand and we had fun goofing around chasing a few of them. After dropping off my sweatshirt and beanie, we both got wet in the mid-fifties water. Needless to say, we were wide awake after that. 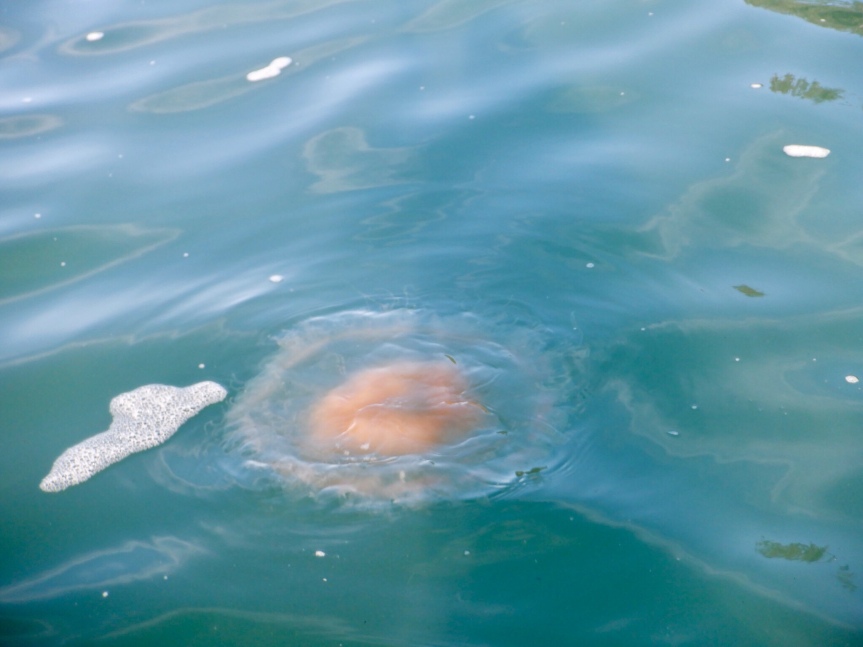 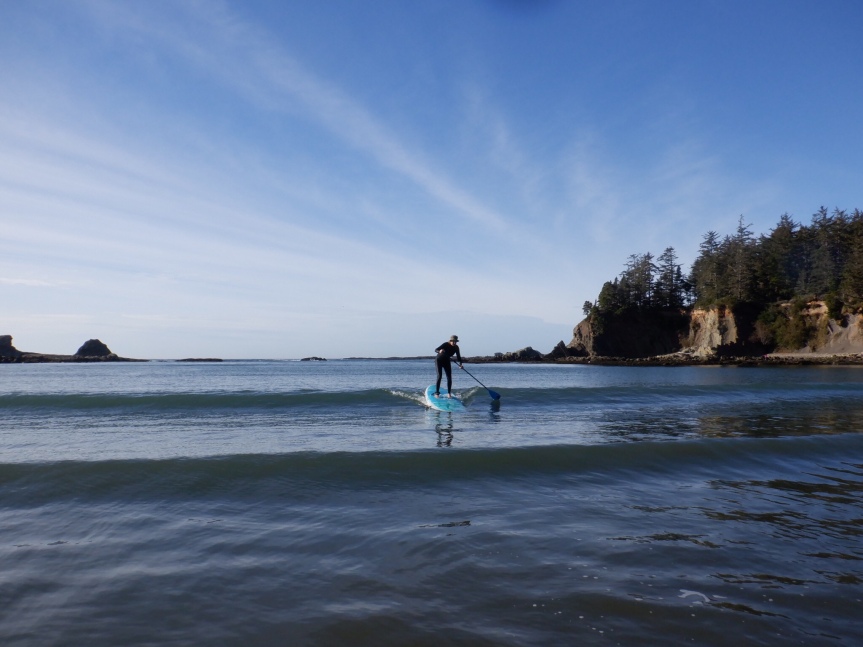 Hot showers at the campground were next on the agenda before taking a car ride up the road to the Simpson Reef lookout where the sea lions haul out and hang en masse on the sand and rocks. We could hear their barking as soon as we opened the car doors. It was a gorgeous vista overlooking rocky outcrops, the sea lion beach and other rocky areas where the seals had claimed their territory. 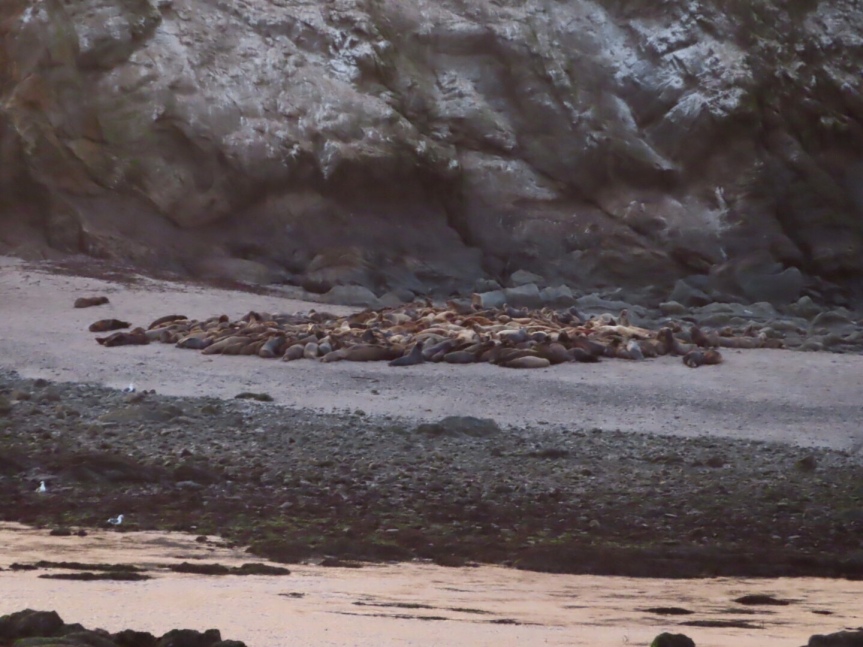 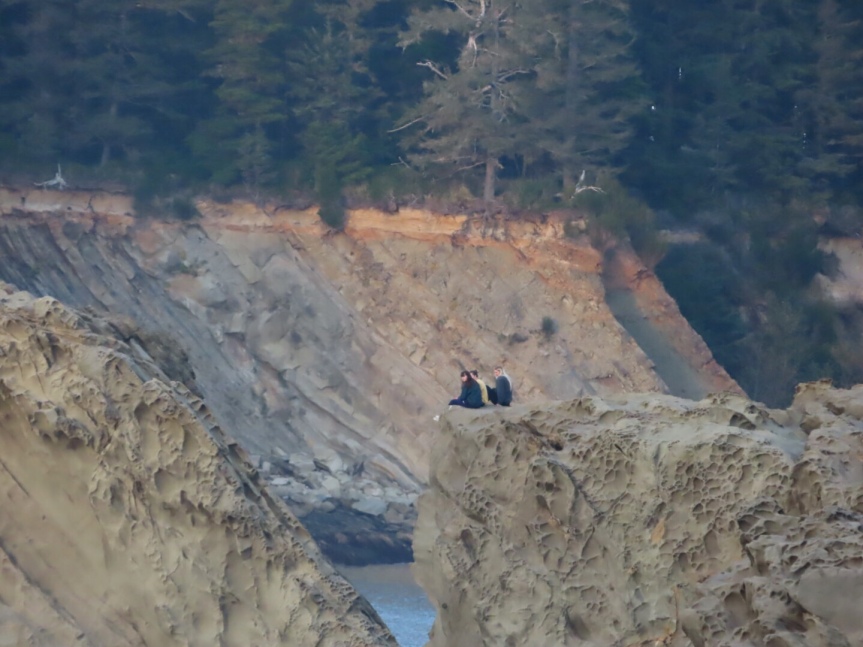 It was a popular spot, especially on a sunny Sunday evening of a three day weekend. We were joined by a gaggle of other tourists and locals waiting for the sun to go down. It was well worth the wait. Another magnificent sunset at Sunset Bay. We left the sea lions to their barking and drove a short ways further up to Point Arago. 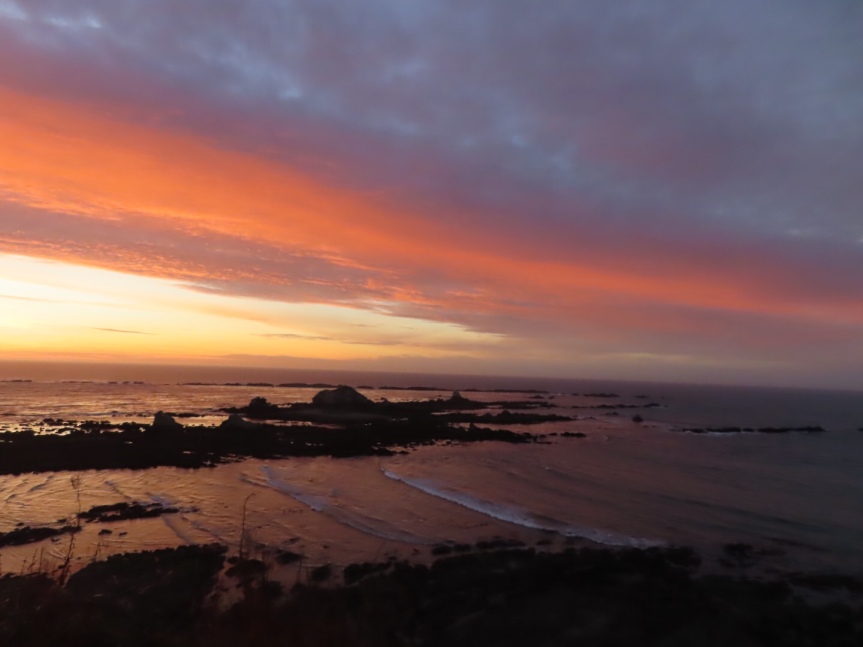 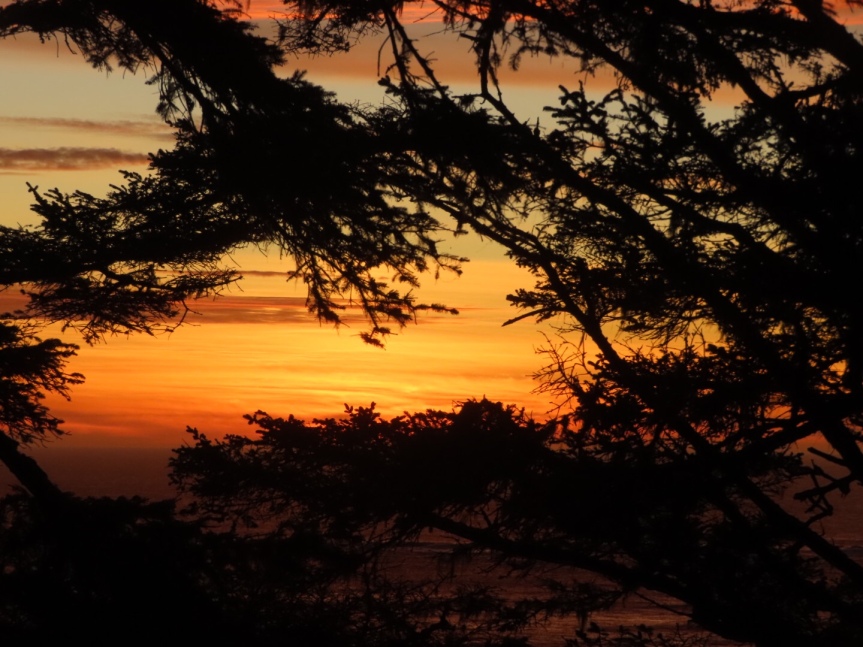 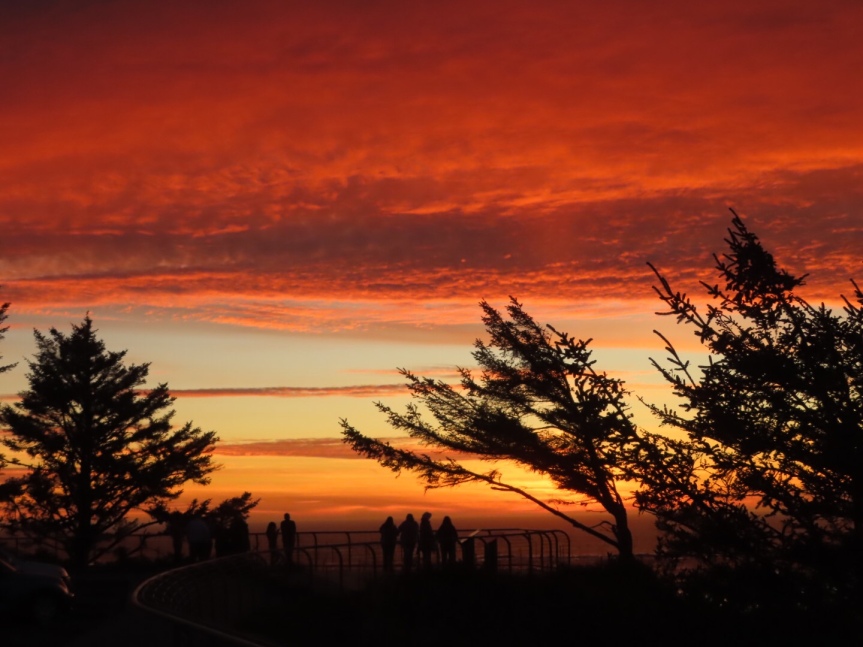 There, they had another overlook and park area. The sun was gone but the sky was awesome and the festival atmosphere continued with lots of families, couples and hip young people out admiring the twilight light show. We were starting to feel the cold so it was time to head home and figure out the plan for tomorrow.

7 thoughts on “Into Oregon”