We had a leisurely morning, feeding dogs and eating cereal with big, fat blueberries on it. After showering, we locked the dogs in with the A/C on and went out front and caught the bus into the old part of Santa Fe. The bus was free because of the Indian Market going on in the center. A holiday atmosphere pervaded the city. An older native gentlemen, who was already feeling no pain, got on the bus and sat right next to me. We were Instant best friends and he regaled me with tales of the Indian Market. He wore native dress with about 20 turquoise necklaces on. He was going to sell them bootleg style at the open air market. He tried to sell us one for $20, but we have enough stuff to pack and haul already. 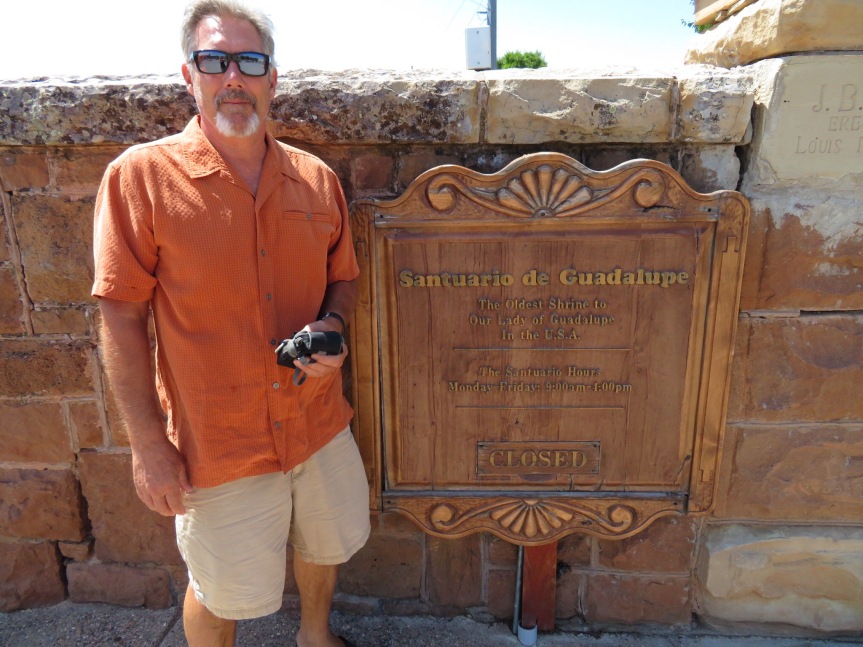 We hopped off at the end of the line and immediately across the street sat the Santuario de Guadalupe. It was far enough from the hubbub of the centro that there were very few people hanging around. We took some photos, then went inside and sat quietly at the back in prayer and meditation. There was positive energy and we watched as a young couple at the very front went through a rehearsal for their upcoming wedding.

From there, we joined the throngs heading into the central plaza. The 95th Santa Fe Indian Market transforms the city of Santa Fe, with nearly 900 of America’s best native artists showing their work in a huge street fair like atmosphere that covers the entire downtown. There were many thousands of people walking all over enjoying the beautiful weather and the art, music and dancing that was going on all around us. 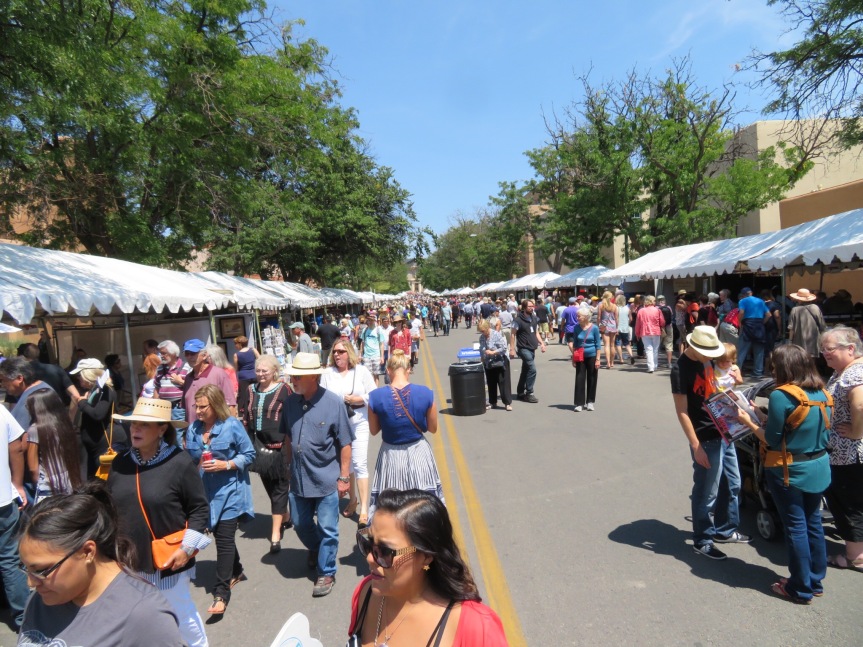 The hoop dance was awesome and my favorite was the drumming and chanting. There were lots of street performers doing traditional dance and music at various spots throughout the plaza. The Indian Market is the largest and most prestigious Native American fine art show in the world. 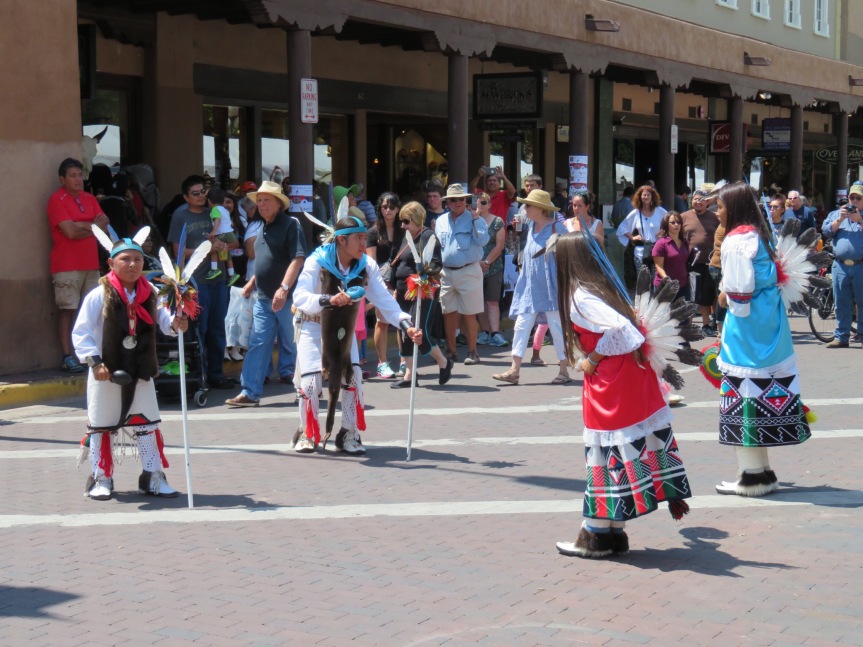 We worked our way through booth after booth of jewelry, art and native crafts until we came to the Basilica of Saint Francis, the large cathedral that anchors the plaza. Built in the 1800s on the site where the first church was originally built in the 1600s, the building and adjacent park are a beautiful place to relax and watch the crowds go past. We went inside and sat off to the side and took it all in. Took a few photos and lighted same candles for people we love going through difficult days. 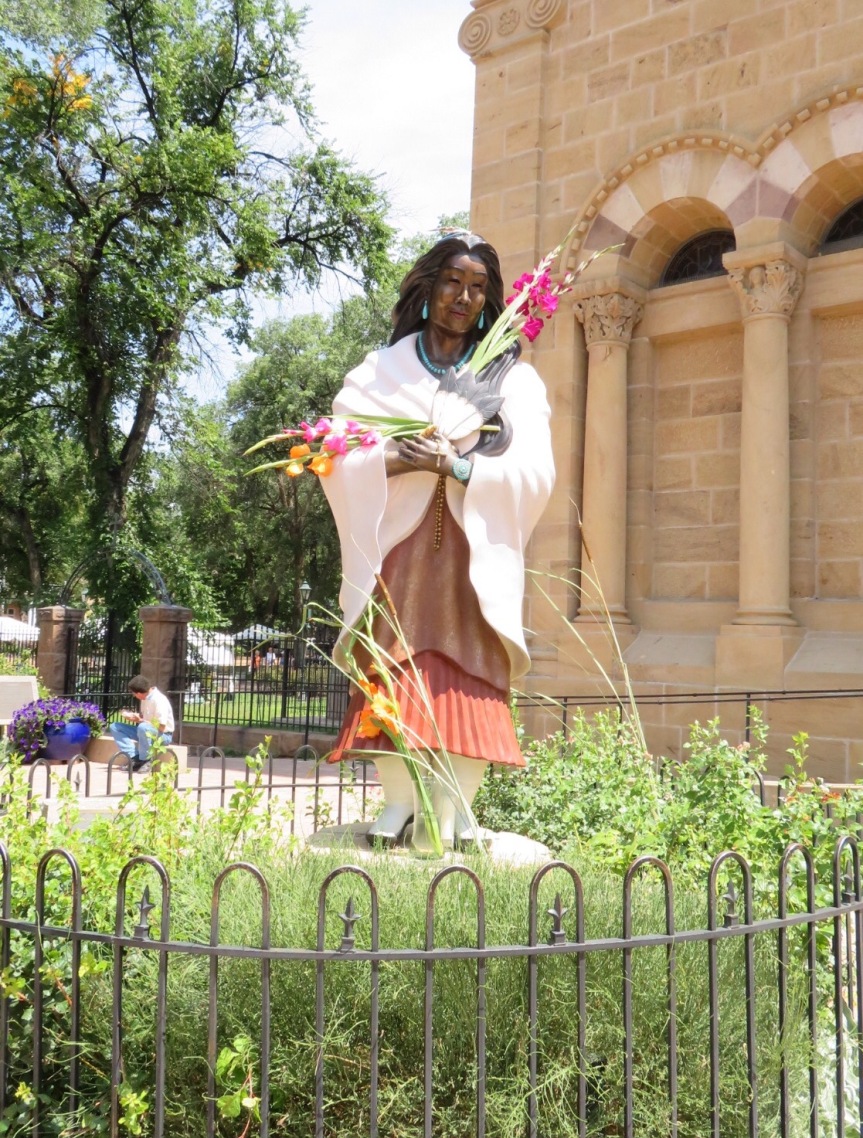 Back outside, we were on the hunt for food. The volunteer in the cathedral had recommended a favorite spot, but it and every other restaurant within the center was overrun with other hungry tourists. We had some kettle corn and an empanada from a street vendor and sat in the park eating them and watching people while the sound of chanting and drumming carried over to us from three young men performing in a doorway across the street. 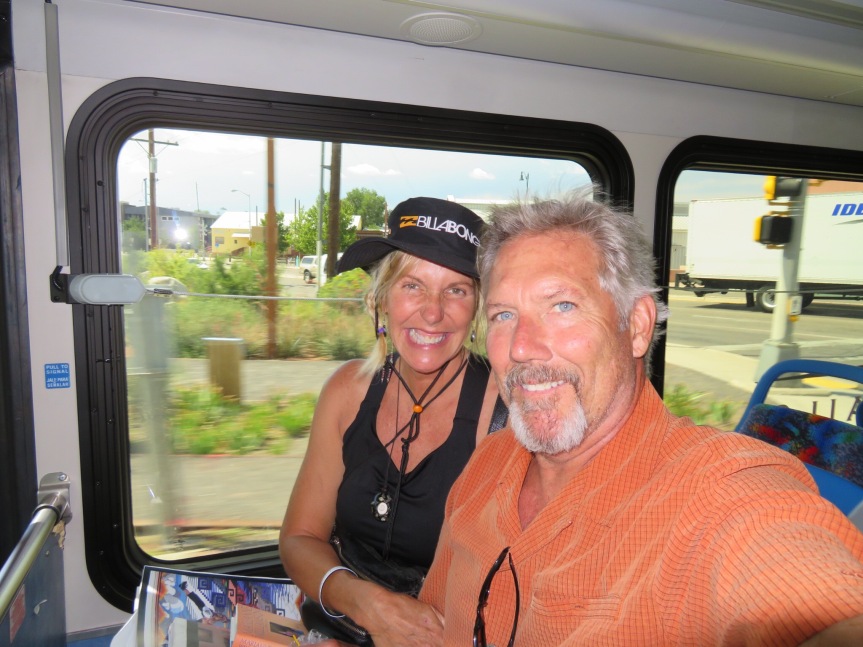 The dogs had been in the RV for a while now, so we decided that we had better head back. Walked back to the bus stop and boarded a bus for Los Suenos. We got off a few streets early to get some supplies at the Walgreens. We walked quickly home and released the grateful hounds and took them for a walk in the grassy area at the back of the park. Enjoyed a nice chat with the Texas couple with the little Casita trailer. Made some phone calls, then retired to the RV. Rain started falling later in the evening making a wonderful rhythm on the roof to sleep by.