The neighbor was using some kind of power tool to retract their leveling jacks at 6:30 this morning. I tried to ignore the noise and get back to sleep, but I was already awake. Not wanting to rouse the dogs, I kept still and mentally went over the things that I hoped to accomplish today. As the sun began to warm things up, I made some tea and took the dogs out for a stroll around the camp.

I got out a mat and crawled around underneath the RV, checking all the bolts and connections to make sure nothing was loose and needed attention. After filling the gas tank, the residual smell of gas stays in the bathroom and pantry area. There is never any leakage on the ground, so I checked the fittings and hose going to the tank from the filler opening. The hose looks a little dry and is now on my list of things to replace when we stop for a day or two. The other thing I noticed was one of the sensor wires that lets you know where the poo level is at was broken. That explains why the gauge hasn’t been working. All of my electrical stuff is buried in the closet, so this is put off until Mazatlan as well.

I worked my way out from under the vehicle and checked all of the tires before breaking down camp. PJ gave Ryan his ukulele back and said our farewells.

We drove down to the RV store and bought a new door panel for the screen door, a cable plug in, adhesive for the slide out seal and some deodorizer for the holding tank. Next stop was Pioneer RV park for a propane fill then we hit the road out of Port Aransas. Made a few unsuccessful stops in Corpus Christi looking for tire valves and a jack cap. Maybe in Mexico. 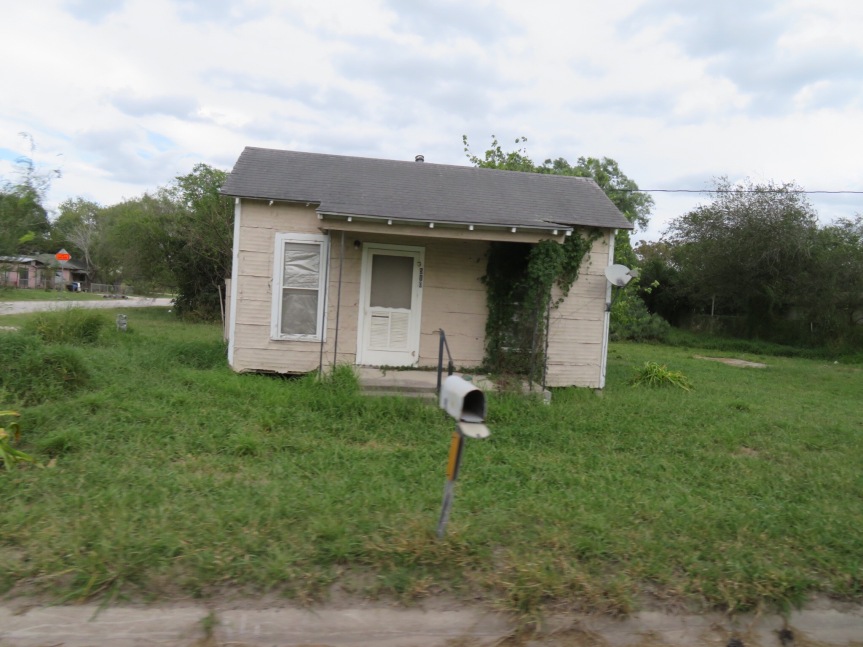 Stopped at the Walmart in Alice, Texas for a major stock up before crossing the border tomorrow. In the same center was a Verizon store so we switched Pam’s plan to one that will work in Mexico. The day is getting on and I’m getting tired. Heavy wind always makes for an uncomfortable commute. Can’t lose focus for a minute and constantly working the steering wheel. They are resurfacing a lot of TX 44 and we had to sit in a queue and wait on several occasions. Gassed up in Encinal at $1.89 a gallon, our last taste of sub $2.00 gas for a while to come. I checked online and it looks like Pemex is sitting at about $2.70 a gallon once the conversions are made.

The sun was setting as we pulled into the weary looking campground at Vaquero Village. No garden spot, this one. Strictly transient workers in the oil business and a few border crossers like ourselves. The owner Juan was really cool and we had a good conversation in Spanglish while setting us up in the last open RV spot. Right next to the over flowing trash bins. A beautiful desert sunset was decorating the sky as we plugged ourselves in and got things rolled out.

I was glad to stop driving, days like today I feel pretty gritty when they’re over. I took a shower and we sat around organizing stuff for tomorrow. Excited about finally getting into Mexico but feeling a little trepidation about crossing the border, finding the right aduana offices to get our paperwork done and getting through Nuevo Laredo traffic. I just tend to the next thing to be done and take it as it comes.

Driving around the U.S. has been an awesome learning experience. I’m working on putting away preconceived ideas of places and people to step into their environment and experience it as it really is. I think most people unfamiliar with an area, myself included, have some knowledge of a known big city in the state or some famous attraction and have that notion of how a place is. All I knew about Illinois was shows about Chicago, but what I found was pure country with a total small time vibe. Same with New York, Pennsylvania, Ohio and so on. The routes we took avoided any major population centers and rolled us through winding back roads with more trees than I’ve ever seen in my life. Forests, rivers, lakes amid sparsely populated hamlets and villages that have seen very little change in the past fifty years.

Going down the east coast was the same, taking ferries, back roads and bridges that spanned miles kept us out of traffic and nearer to nature. Sitting out Hurricane Matthew in Delaware being blown around and drenched for three days. Touring the south, visiting states I’ve never been in before. It’s been a great ride. Visiting family and friends in Rhode Island, the Carolinas and Texas. Covering 7,271 miles in 111 days bringing us tomorrow morning to the Mexican border.

We are looking forward to the next phase of the adventure. Stay tuned.