We’ve been Mazatlan’ed. We were planning on leaving tomorrow, but we just can’t get ourselves to go just yet. There are still are a couple of things we want to see and do plus the weather is perfect, mosquitoes are few and the mellow vibe lulls you into a complacent state that makes you want to keep hanging on the beach. We paid up for two more nights and Friday is our new departure date.

PJ started the morning with some yoga while I sipped tea on the patio. I walked a few blocks down to the fruteria and bought some fresh strawberries and a carton of yogurt. Back at camp, I made fruit bowls topped with yogurt, granola and chia seeds.

We sat in the shade watching my new bro Ignacio fishing out front. His reel of choice is a section of PVC pipe that he wraps his fishing line around. A large hook and big lead weight help him throw his bait out past the inside breakers. His custom angling accessory is a short piece of bicycle inner tube that goes on his casting finger to keep it from getting cut by tension on the line. The tide was high and the fishing was disappointing. He managed to hook a small eel which tied itself in a knot and proved nearly impossible to get free from the hook without hurting the fish.

PJ took the dogs out for a walk down the beach while we were messing around with the eel. Not too many people around. The neighboring hotels look practically empty and we have free run of the beach as far as the jetties to the north. 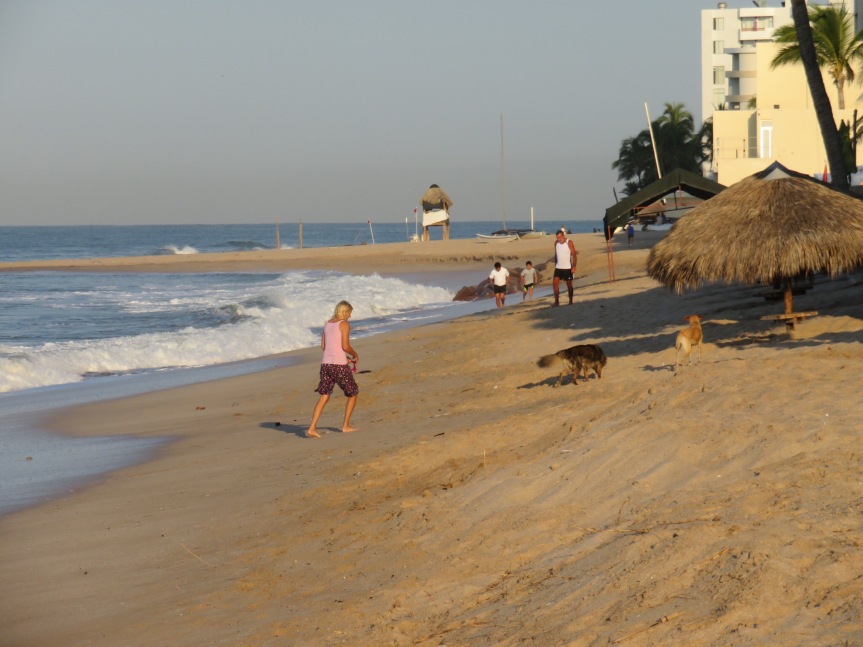 We went for a swim but the wind was kicking up and it was almost chilly. Water must be all the way down to 80 degrees. We went back to camp and just hung around relaxing. I read a few chapters in my book when a Canadian guy named Joe came by and talked for quite awhile about places to visit further south. He is traveling solo in an older rig with his dog, a rambunctious pit bull mix that excavated a giant pit in the sand while we were talking. 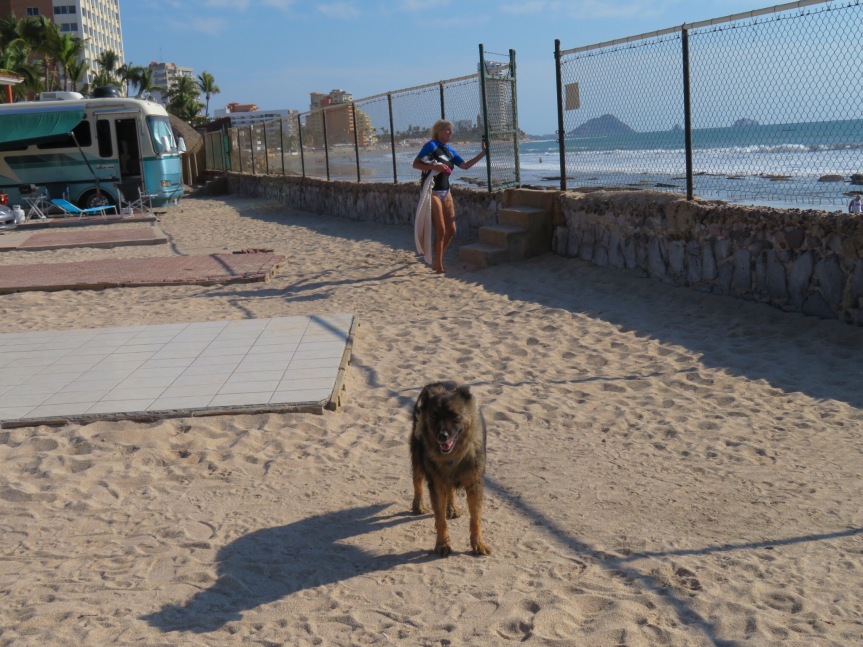 We reheated pizza from the other night and sat out under the communal palapa to eat our lunch. PJ got to talking politics with Cheryl from Texas as we munched on our leftovers. Mike and Bill passed by with Marley which got Cheryl’s little lap dogs all riled up. Had a little social time then I slipped back over to the RV to continue reading my book. PJ spent a few hours on the phone talking to her family. Did a few chores, mainly dumping the sewage tank, but you don’t want to hear about that. The hook ups are in such an odd position at Mar Rosa that unless you have 30 feet of sewer hose, you have to move the RV closer to the drain to empty the tank. Anyway, moved it back and then swept the patio and organized things. The laundry guy brought our fresh smelling smartly folded clothing back so we put that away. Domestic afternoon, boring stuff but satisfying for us. 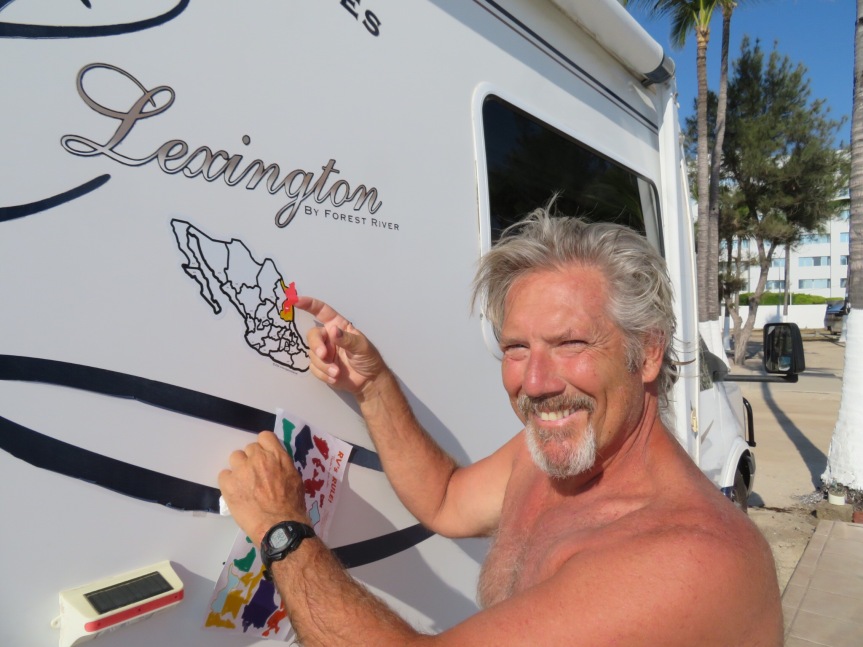 At sunset, we put on our shoes and hoofed it down to the pharmacy to buy a few items, then hit Taco Time for a couple of tacos for dinner. The hall where they hold AA meetings is a few blocks further on so we walked over to see if we could catch a meeting. There was a Spanish speaking meeting going on but the English meetings are only held every other day. Today wasn’t one of the days. We’ll check it out tomorrow. Mazatlan doesn’t strike me as a city where being sober is a top priority. As we were walking back a pulmonia full of parrot heads drove past holding out their red cups and giving us a bit hoot. We laughed and owoooed them back. 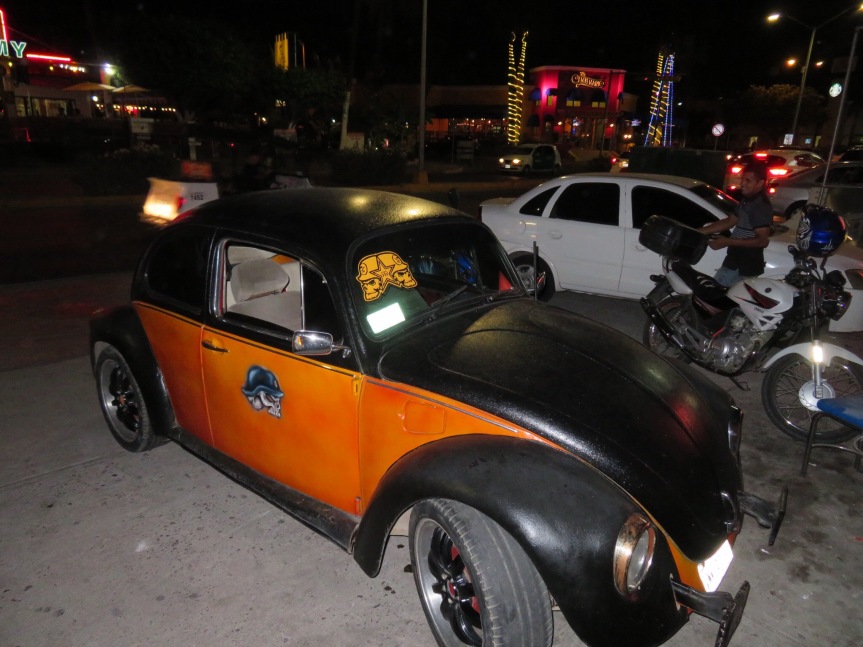 Dairy Queen was on the corner and we found our feet inexplicably pulling in that direction. We sat in the air conditioning and ate a couple of small sundaes then caught a pulmonia back to the campground. 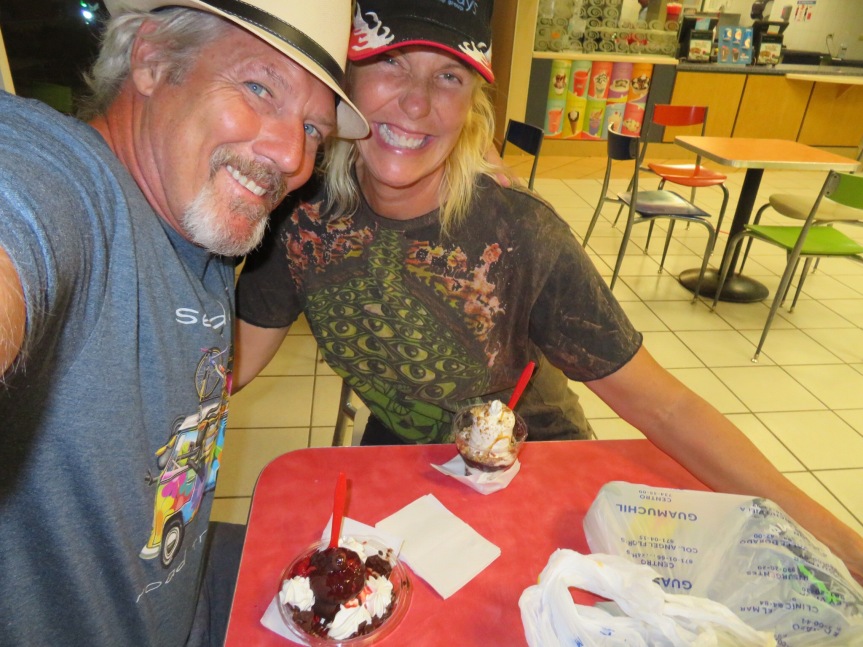 We have been hauling around these paper flying lanterns for the whole trip saving them to celebrate arriving in Mexico. Tonight was the night. Had a tough time getting the first one lit with the wind blowing out on the beach and a weak flame on our barbecue lighter. Finally got it going and it took off heading southbound down the coast just like we are. A big hoot went up from the patrons at the beachside restaurant that must have been watching us struggle to get it lit. We embraced and watched it float away until we could see it no more. 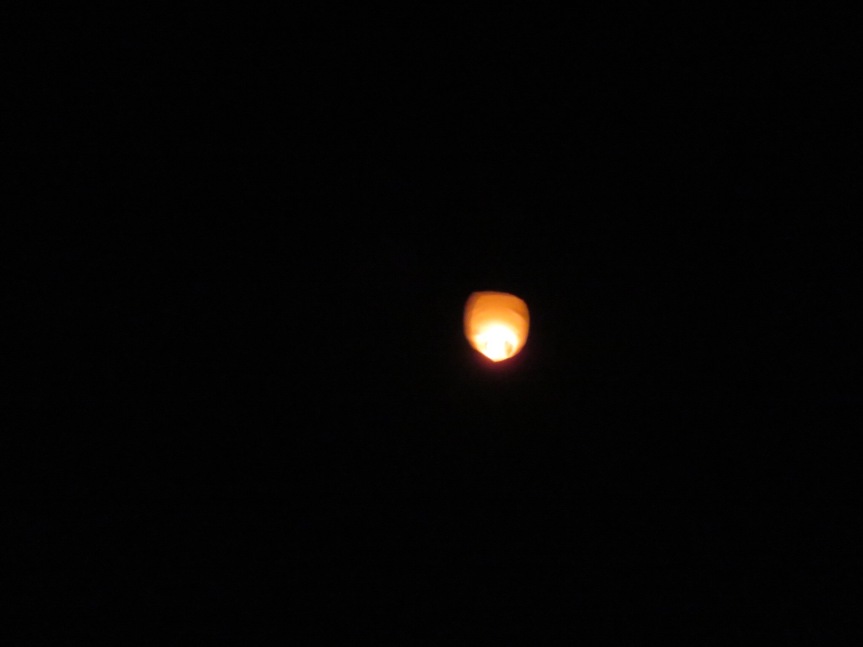