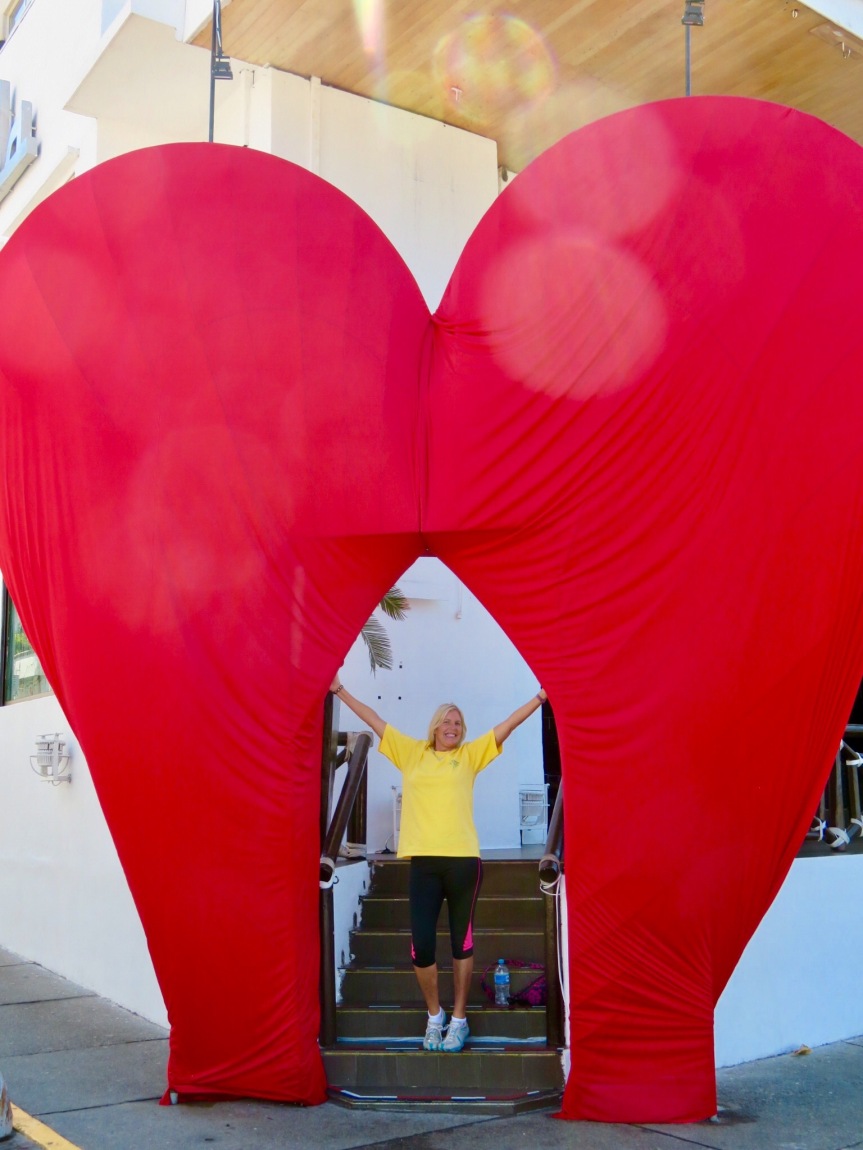 The yellow and black songbirds were feeding in on the flowers of the tree out front when we stood at the gate waiting for Joaquin. It’s time to get serious about taking care of this ear. We did our usual morning stuff then caught the 10:00 shuttle over to the bus stop by the Decameron Hotel. 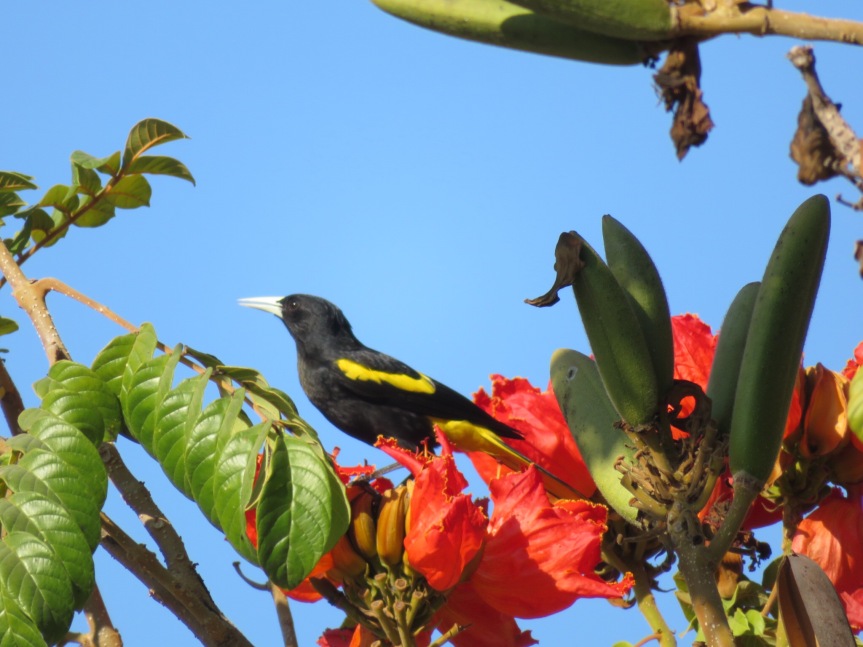 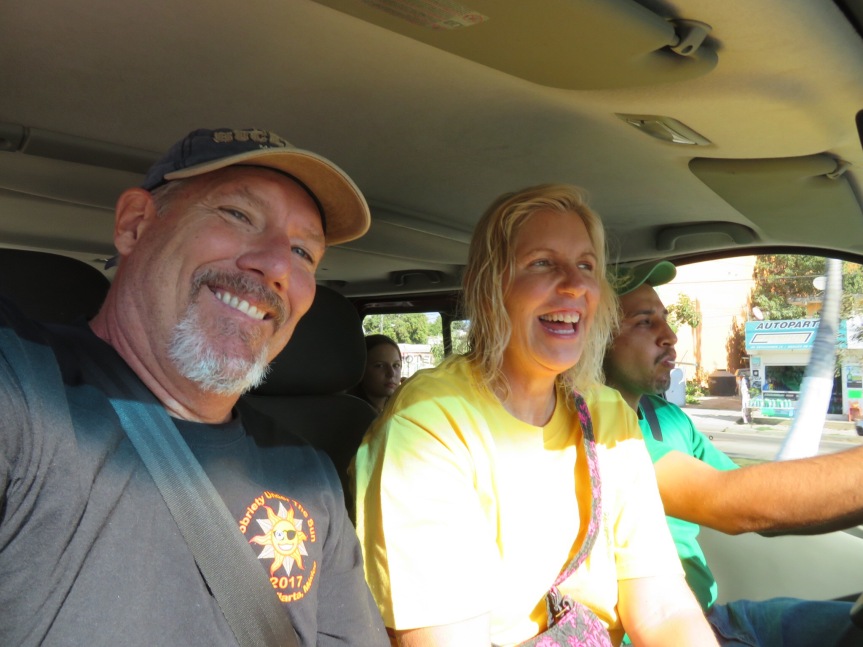 The ATP white bus for Puerto Vallarta showed up a few minutes later. I always enjoy riding buses in foreign countries because you never know what you’re going to see. PJ, not so much. This bus was a beater. The seats wouldn’t stay in an upright position and the floor was patched up with pieces of plywood. The driver looked about 12 and the gears were grinding hard. We bobbed along in a semi-reclined position until we got to Puerto Vallarta and hopped off by the soccer stadium. Our neighbor’s daughter was riding on the bus to join her fellow students at a big sports event right where we got off. She let us know where to debark and from there we started walking into the tourist area. 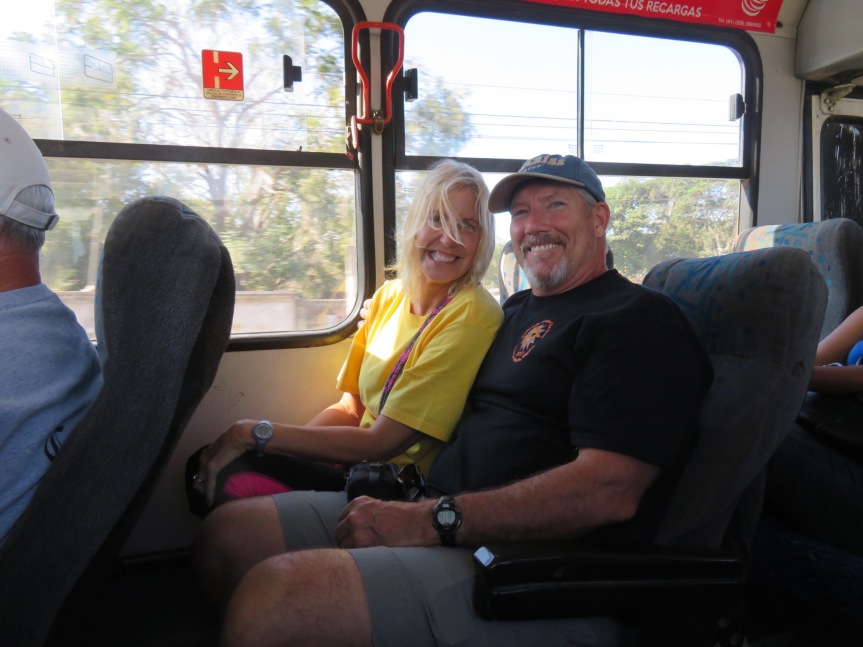 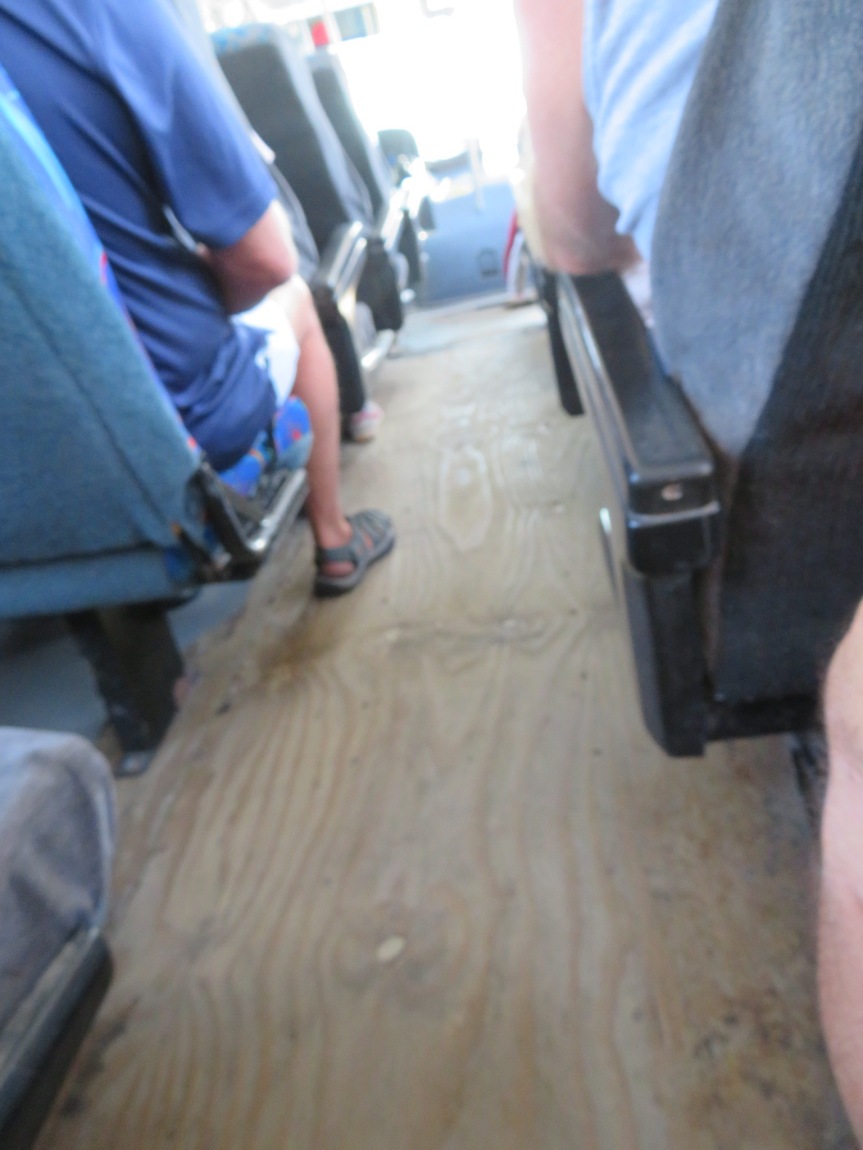 The last time we did this trip, we walked along the malecon, so today we followed the main street and PJ poked her head in the the rows of chotske shops. She found a little necklace she liked with a medallion of an Aztec calendar charm. We bought it as a Valentine’s memento and kept walking to where the street runs back into the malecon. 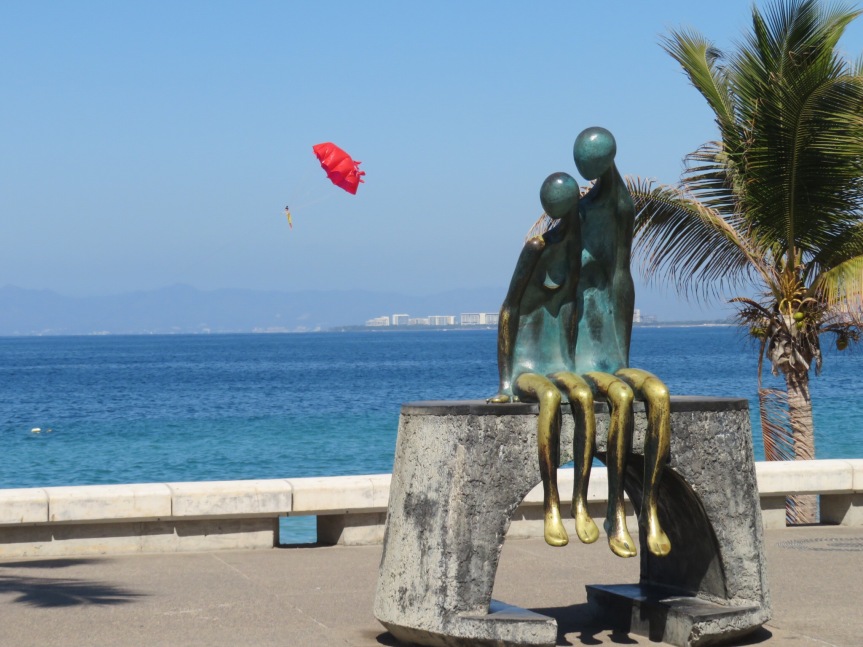 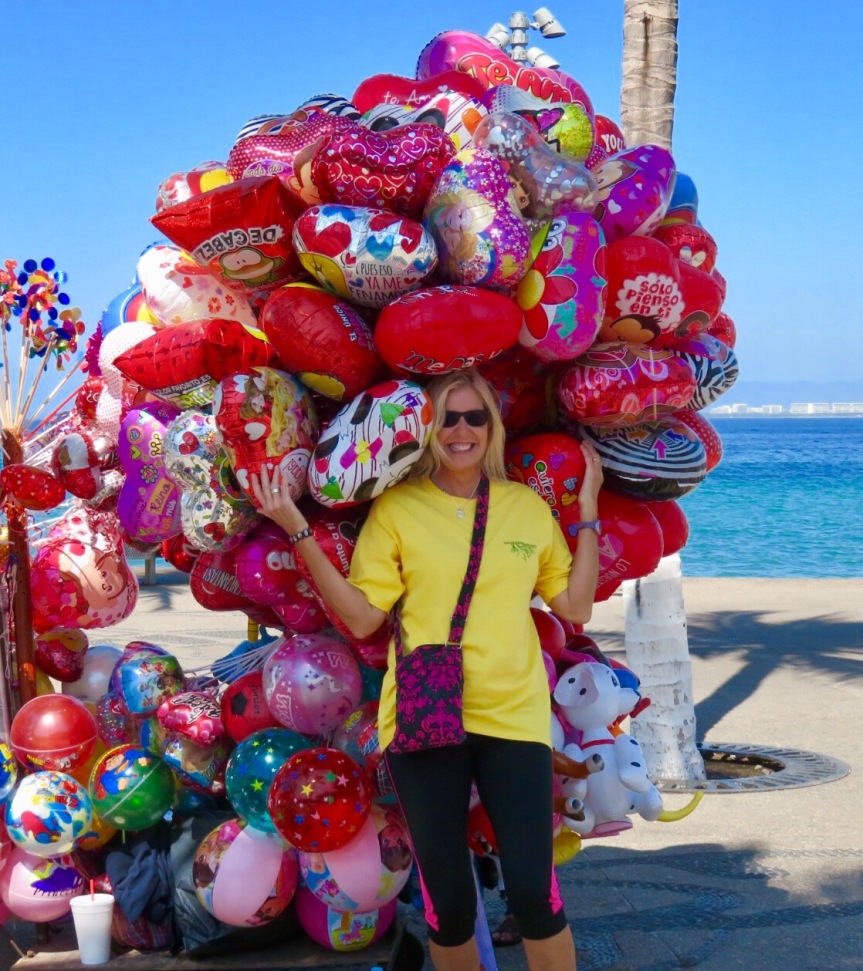 We walked along the boardwalk checking out the restaurants, shops, and the wide variety of tourists that were crowding the walking street. A troupe of Toltonac Indians were setting up to do the pole flying dance, but we didn’t have time to hang out and watch. We hustled down the malecon dodging super large tour groups that filled the entire plaza. There were a couple of big cruise ships in ports and this must be where everyone is at. 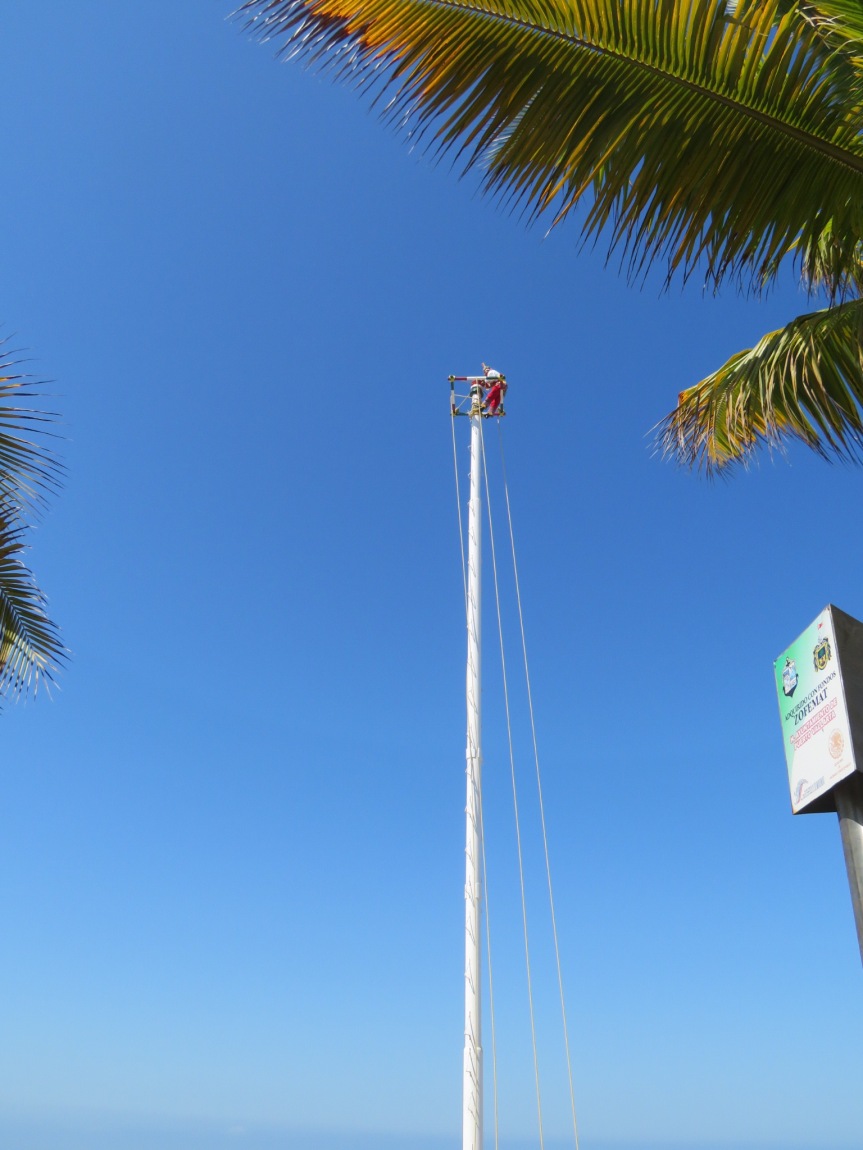 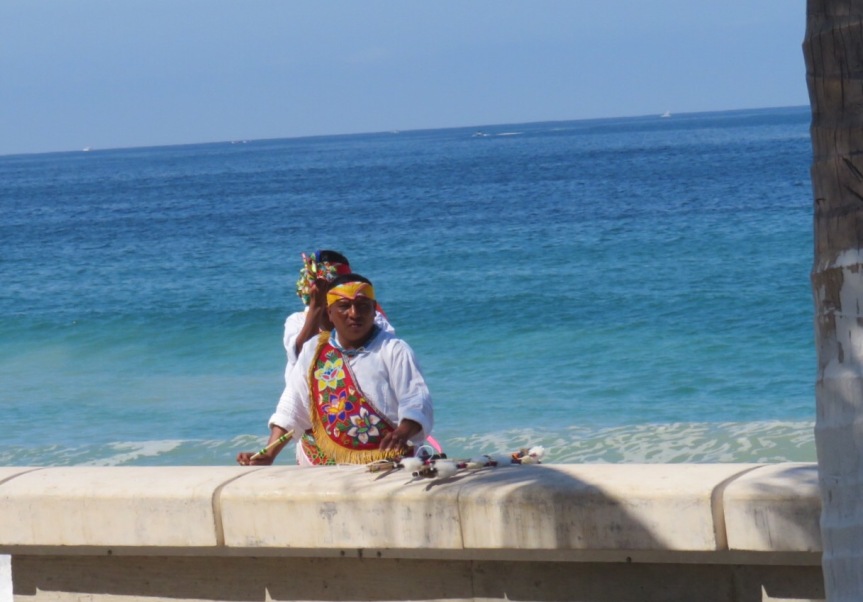 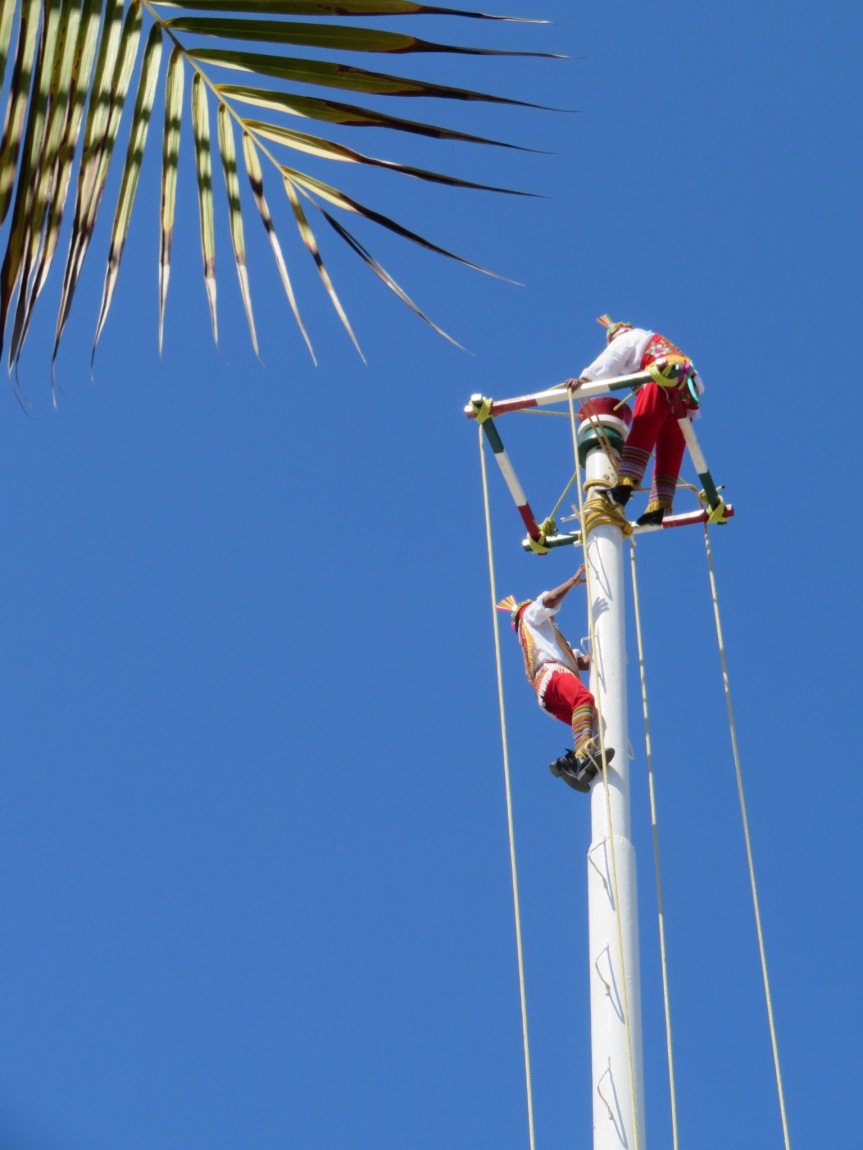 We crossed the main boulevard and moved into the side streets and worked our way over to the hanging bridges to cross into the romantic zone where our clinic is located. It is actually less than a block from the Alano Club so we know the neighborhood well. We arrived a few minutes early, but didn’t have to wait more than a few minutes before going in to see Dr. Nunez. 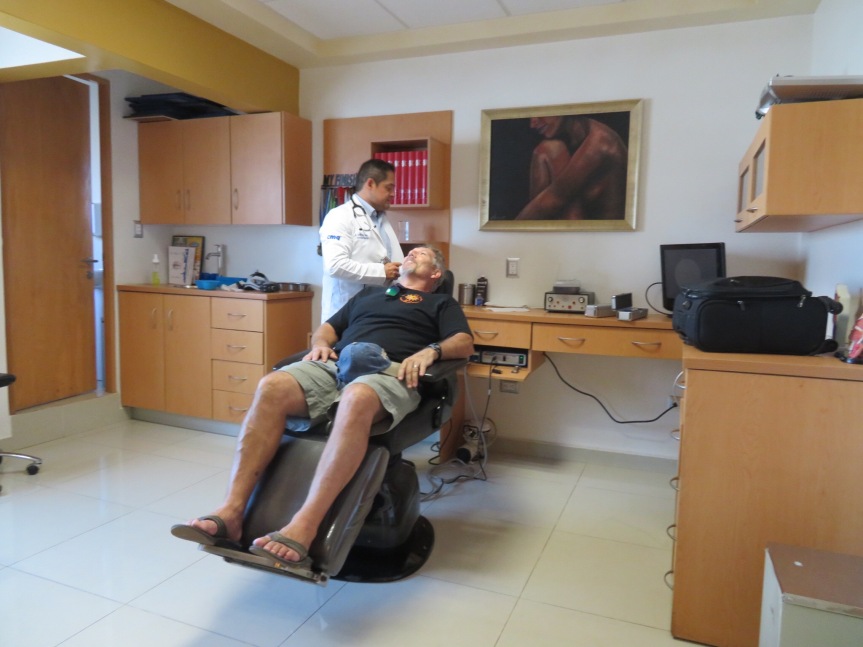 The doctor is awesome. He speaks perfect English having grown up in the U.S. until he was eight years old. He listened patiently then sat me in the chair and using a micro camera and an aspirator, Dr. Nunez carefully and thoroughly cleared all of the debris out of the ear. Painful at times, but when he was done, I could hear! Things were super tender from the procedure but man o man is it nice to hear nearly normally once again. He prescribed some antibiotic drops and I made an appointment to return next week. 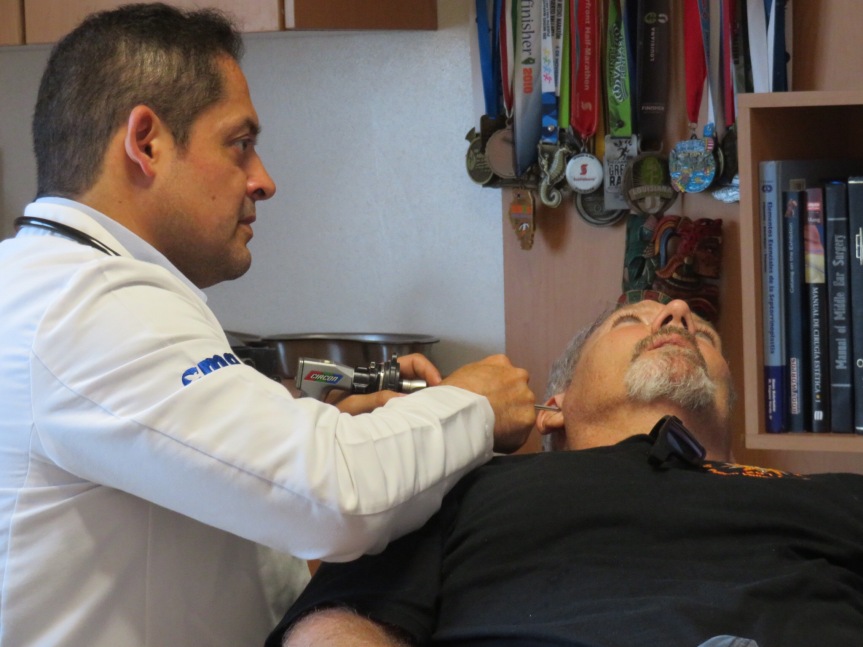 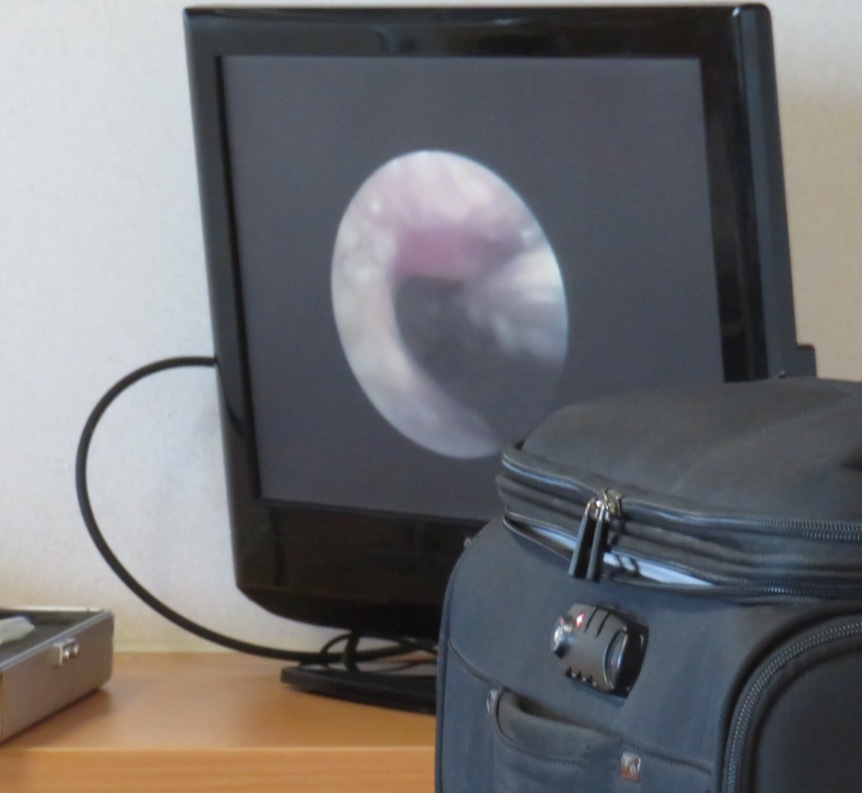 Since we were in the romantic zone, we decided to make a Valentine’s Day out of it and have a nice lunch at the The Blue Shrimp down at Olas Alta’s beach. Our table directly overlooked the sand giving us a bird’s eye view of the speedo clad visitors and other tourists trying to relax and read their books with a new vendor interrupting them between each paragraph. The atmosphere was, indeed, romantic and we enjoyed a deliciously cooked seafood lunch and felt an immense amount of gratitude to be where we are, doing the things we are doing. We took our time dining, then took a brief stroll along the beach before catching a taxi back to the waiting perros at Los Arroyos. We had thought to take a nap but as soon as we returned, the maintenance guy showed up to fix the toilet. 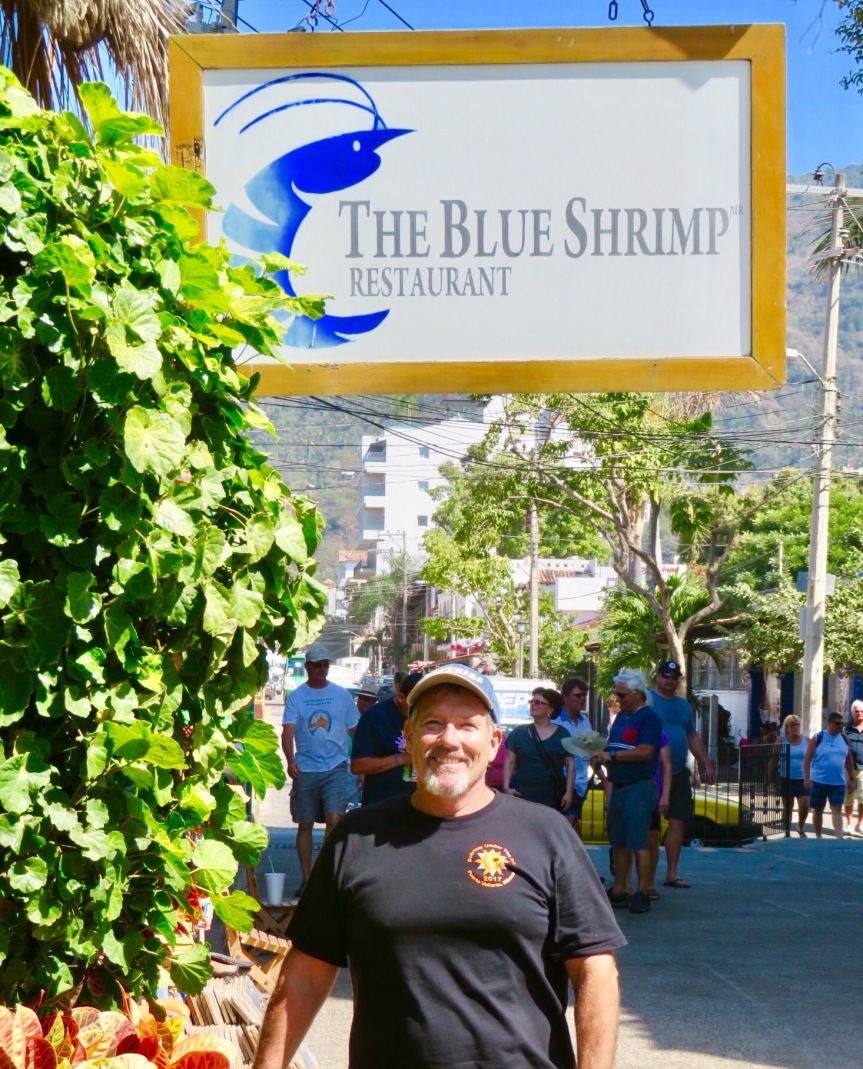 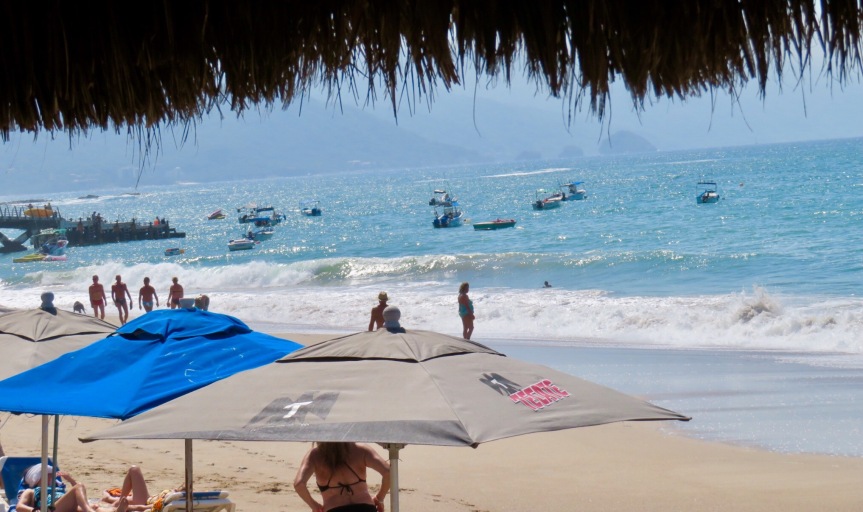 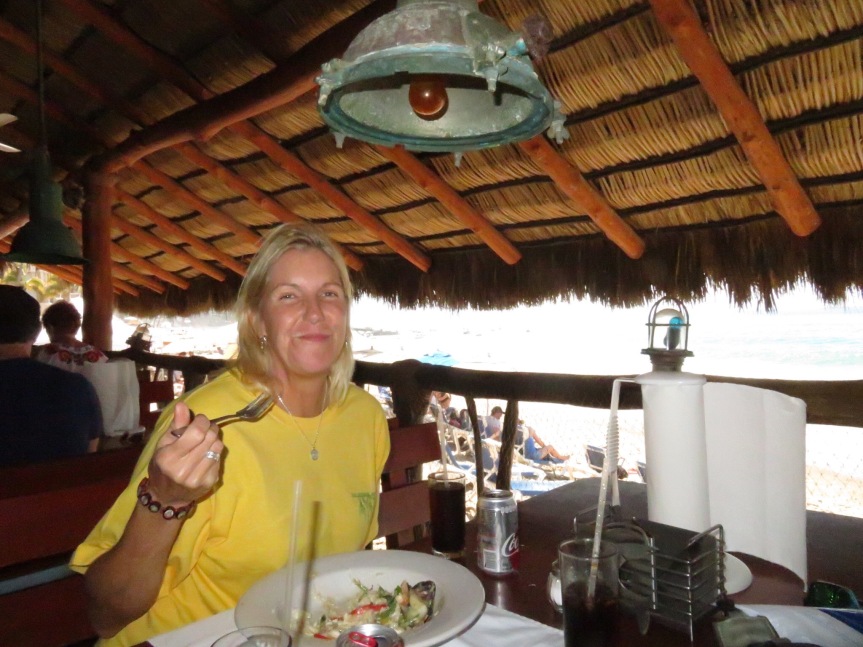 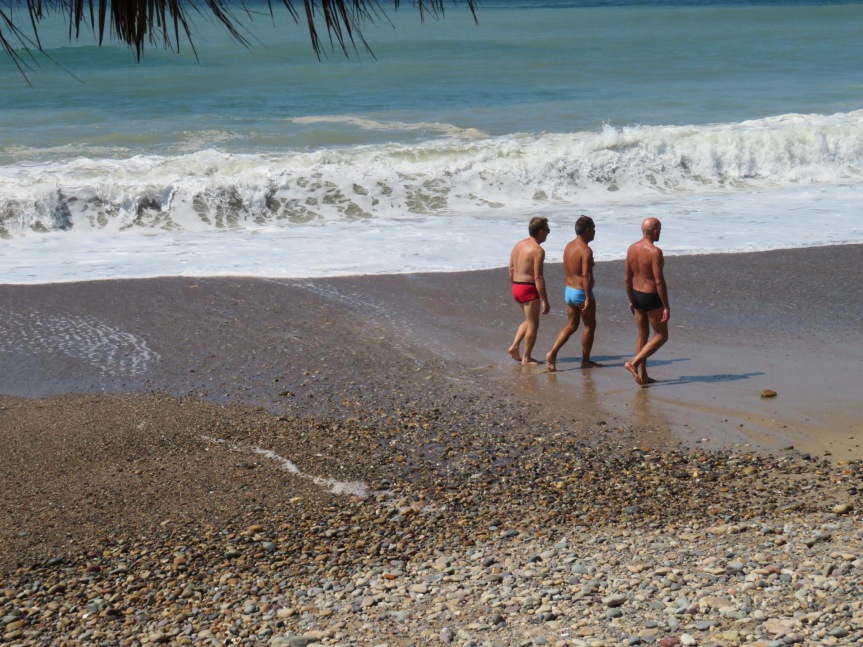 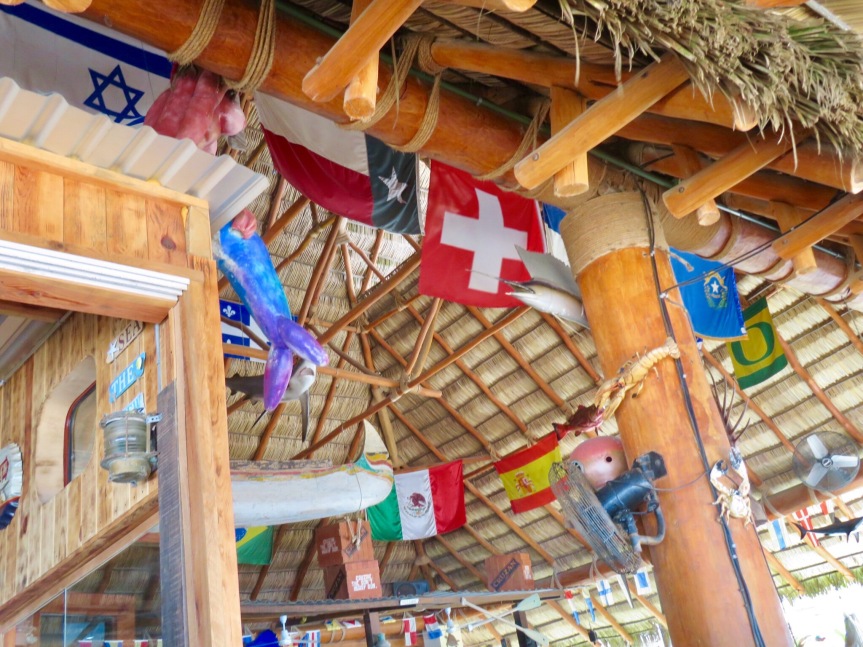 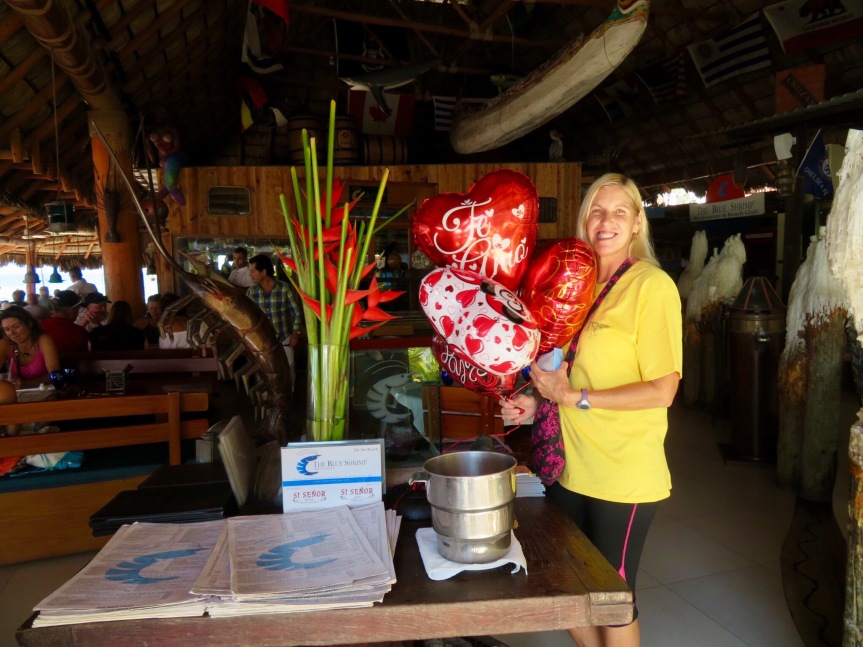 Soon he was gone and we spent a quiet evening napping, walking around the compound, hanging in hammocks and goofing around online. Happy Valentine’s and wishing mucho amor a todos nuestros amigos ❤️. 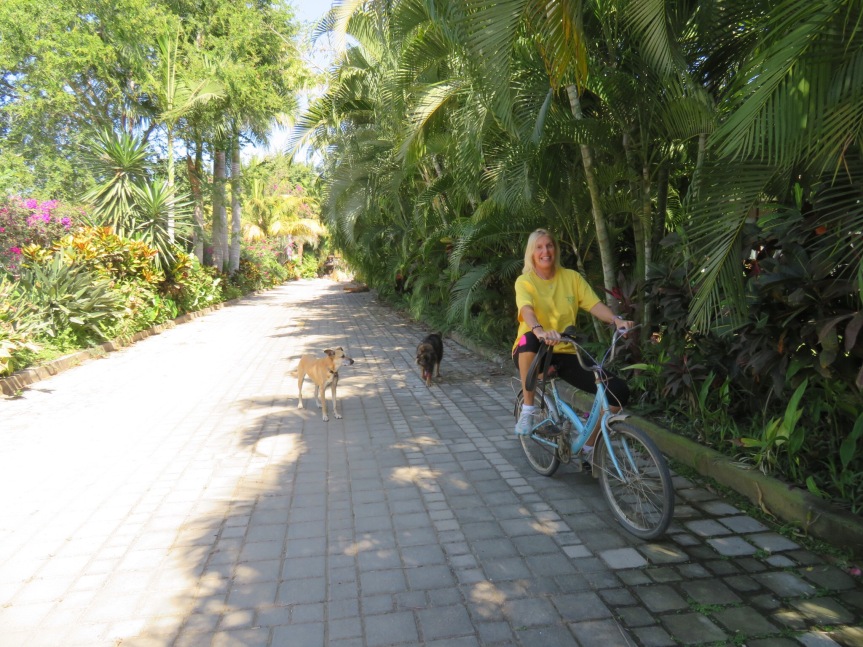 2 thoughts on “Happy on Valentine’s Day!”