Turning sixty. How did this happen? Seems like not so long ago I was finishing up high school and skateboarding empty swimming pools with my pals. But here I am languishing in some foreign backwater forced to soak my aging bones in tropical water every day.

The morning fireworks were rattling Cali’s mental health so PJ took her over to the front room where she closed the windows to ameliorate the sound. I slept in until around 8:30 then stepped outside to see my card and presents set out on the shelf on the deck. We took the dogs for a walk down the beach and started the day with a quick dip in the ocean to wake myself up.

Returned to the pad where I did a little stretching while PJ got hung up trying to post a birthday note on Facebook. The internet wasn’t doing what she hoped for and it became a challenge that had to be conquered. I made some breakfast and we ate it on the sky deck. Setting up to be another amazing day. Pretty soon, it was time to head off for my massage appointment, so birthday celebrations were postponed until I got back. Walked into town and waited on the little porch area of the spa until Janet came out to meet me. Excellent massage although the time was a little short. For twenty bucks I wasn’t going to worry about a couple of minutes. I’ll sign up for the hour and half next time and get an hour and fifteen and be good with that.

I was a little befuddled as I usually am right after a massage and I staggered my way back down Calle Minitas to continue the birthday festivities. PJ had some tarts and cakes from the bakery and we lit candles and sang happy birthday. We sat on the north deck and I opened up my gifts from PJ. A tambourine and a vihuela made in Michoacán. The vihuela is a mariachi instrument similar to a guitar but with five strings and only three frets. 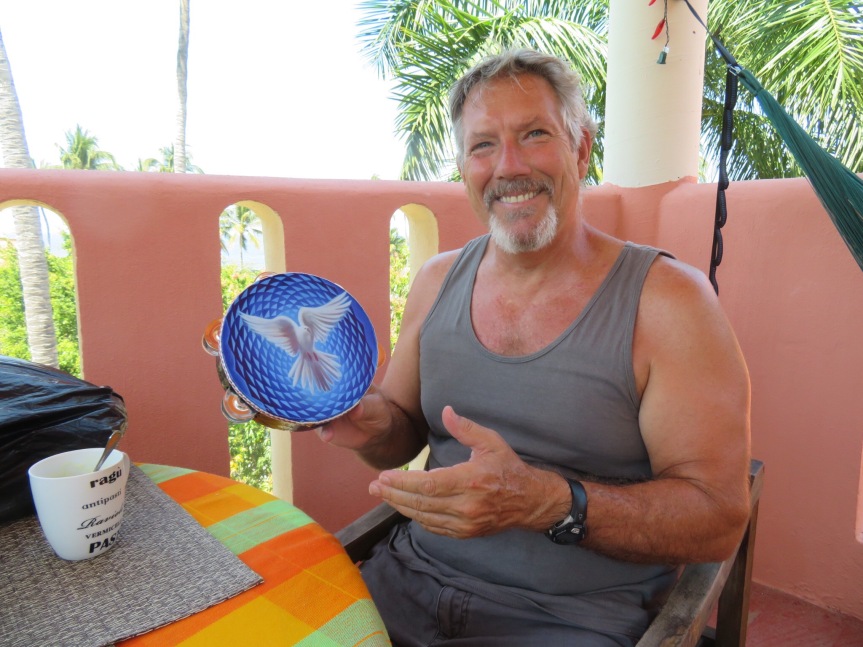 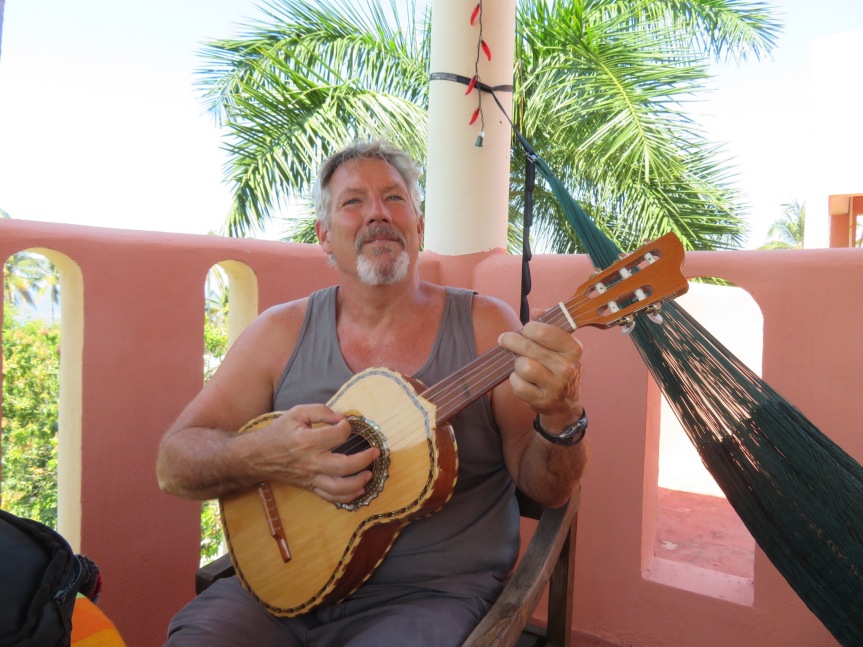 I googled how to tune the vihuela and watched a tutorial on how to play songs with it. Might be a bit of learning curve. I had better hunt me up a mariachi to show me how it’s done. It requires a very fast strumming technique called fanning. I got it tuned up and played around with it a bit. Another cool addition to our musical arsenal of guitars, drums and ukuleles. Now if we could only learn to play the darn things.

In the late afternoon we went for a dip in the sea. Tomorrow is a day off for the beginning of spring so there is quite a crowd of out of town Mexicans here for a weekend at the beach. We laid out our towels next to Martin and Gail then hopped in the calm ocean with our water camera and took a few photos. Water was refreshing with a few cold spots here and there. Well, cold relative to the average here. Still warmer than the warmest summer water in Carlsbad. The beach was festive and the energy was high.

We went up and changed clothes then came back to the beach to eat at Tomatina’s, the restaurant right on the sand. The tables on the beach were full, so we sat at a long plank that divided the beach from the patio and ordered up some dinner from Jorge our favorite waiter. The chef is excellent. I had mango chicken and PJ had a fresh caught tuna burger. The guy’s sauces are amazing. Watched the sun disappear with the frigate birds circling overhead. A parade of diverse humans continually passed by our site walking out to the point at the end of the bay. Totally relaxed at the end of the day. 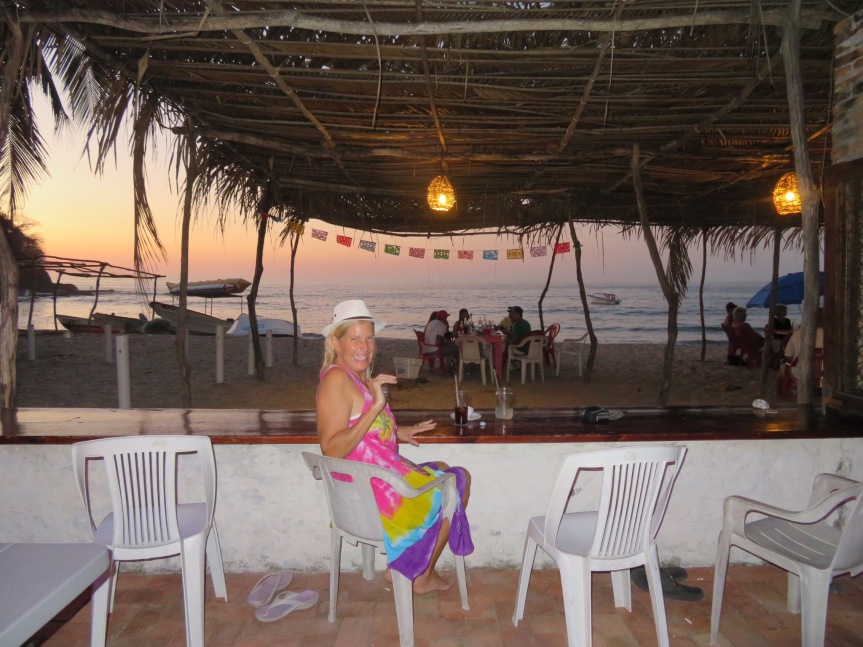 We walked back through La Parota trailer park to the tower and freed the canines for a walk down the calle. Large groups of pedestrians passed by on their way into the town center for the night’s entertainment. The band from the plaza could be heard all the way out at our end of things. We returned home and lit up one of our paper lanterns then launched it up off of the deck. It bounced twice off of the tallest palm on its way out to sea. Scared me for a second looking like it might get caught up in the fronds and catch the tree on fire, but it swayed sideways then moved up and out and soon disappeared past the night horizon over the dark glassy waters of the Pacific. We took it easy listening to the wide mix of music and noises penetrating the night from people partying around the neighborhood with the bass notes from the plaza always pounding in the background. A minor warm up for Semana Santa yet to come.