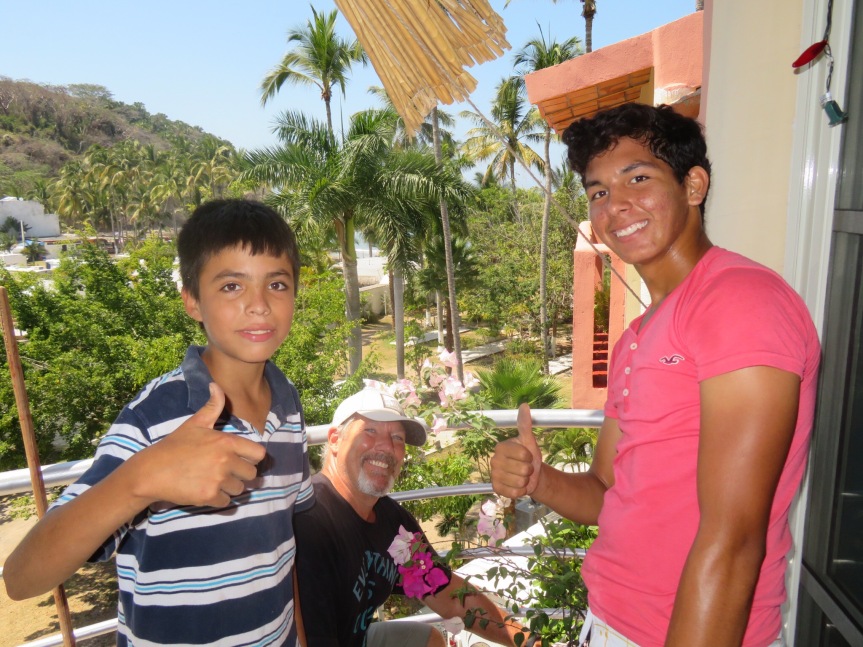 Massages were on the docket this morning starting with me at 10:00. Puttered around a little moving the RV over to a sunnier spot where the solar panels could do their thing and the steady piling on of leaves from the giant ficus tree and it’s resident bird’s droppings could be avoided. 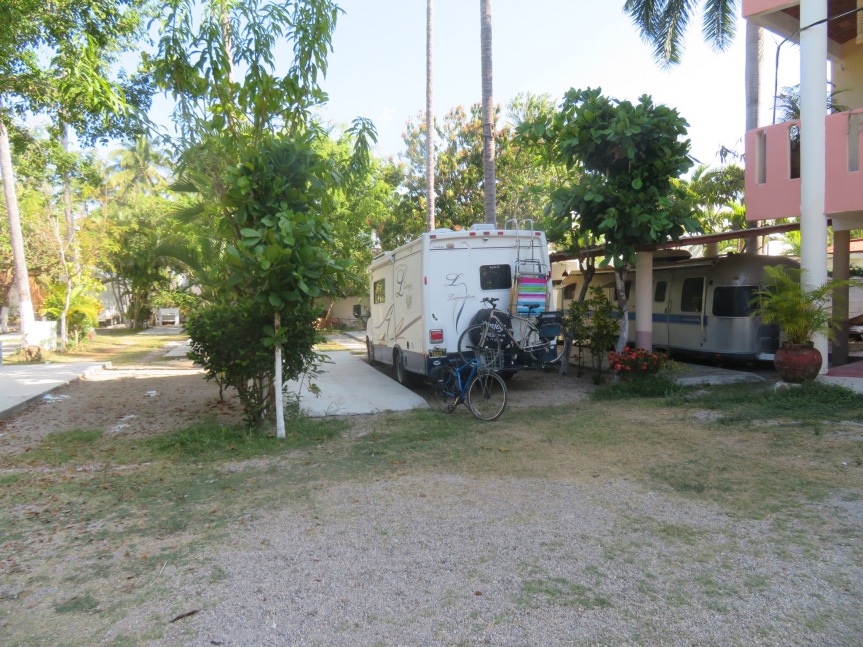 I walked into town arriving at Nirvanna a few minutes early. I sat on the couch out front and waited for Janett who showed up a few minutes late. She comes from Sayulita and traffic had been a little heavier than normal today. Things were pretty relaxed. It looks like PJ and I are the only clients in the line up this morning. Janett does an excellent massage and this time I got my full hour. 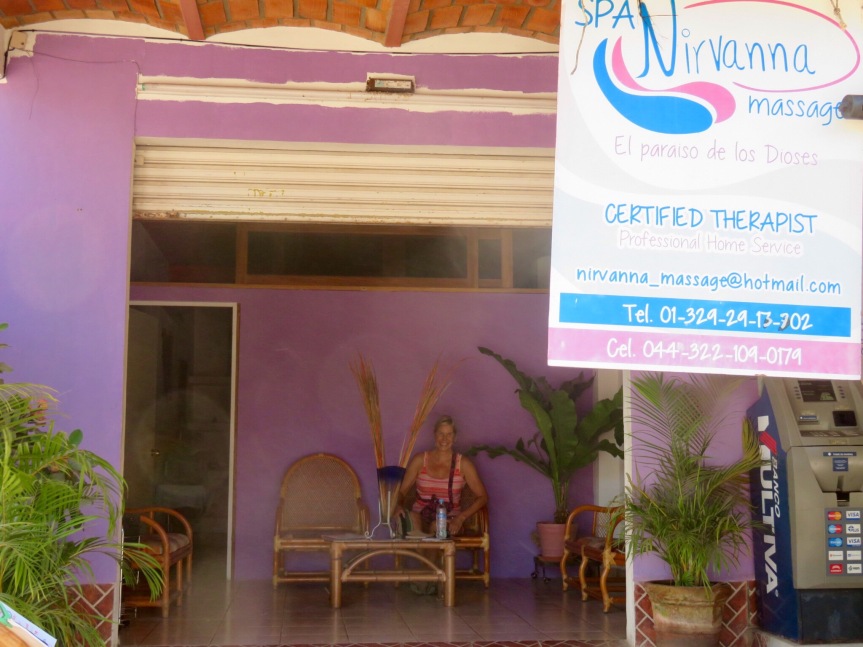 PJ arrived at 11:00 and was waiting outside when I emerged all sleepy eyed after my massage. She had ridden my bike down so I could do the shopping while she was getting rubbed. I started next door at the veggie stand then rolled down to grocer across from the plaza. The plaza has gotten a face lift with nice colorful designs. Not much going on in town, things are relatively quiet for a Saturday. 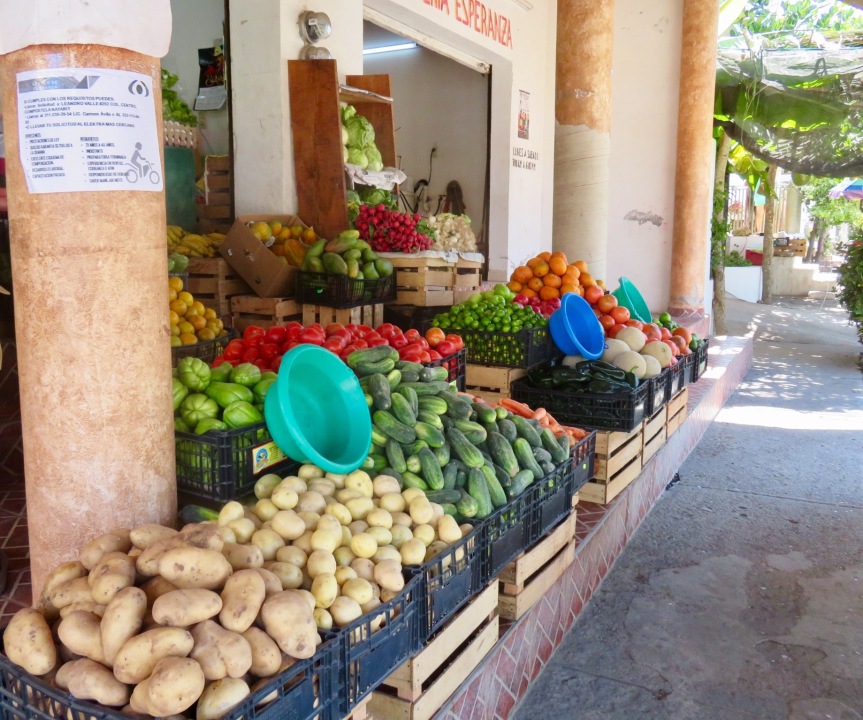 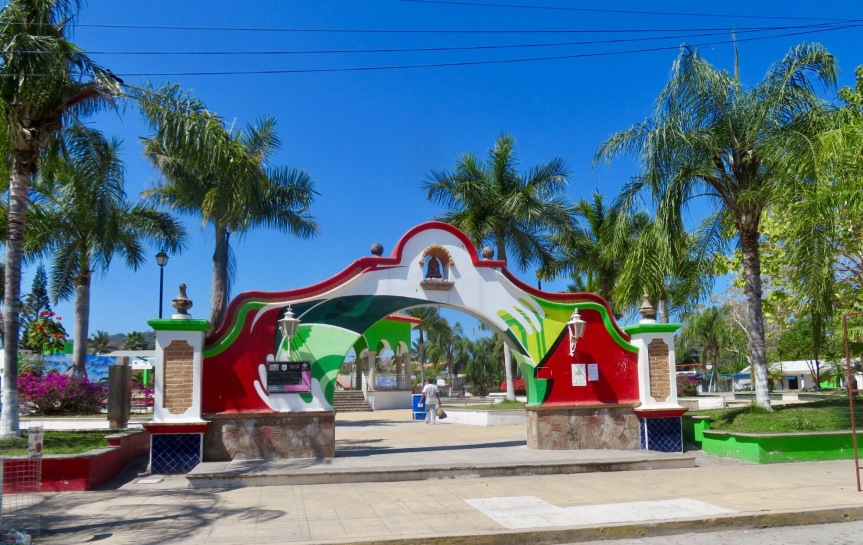 I pulled up to the discombobulated hardware store where everything looks like it was just tossed into the room. The grumpy owner was sitting outside on a chair and begrudgingly got up and found me a small extension cord somewhere in the back. There are two hardware stores in town, this guy – the super sloppy proprietor by the center and near the end of town, there is the super anal, highly organized guy. Between the two of them, you might get lucky and find the part you need. From there, I ran across the street to the variety store and bought a can opener. The tianguis next door looked sadly unattended. It won’t be long before it, like lots of other things in town, rolls itself up for the season.

The bike was starting to put on weight and I still had the major shopping to do at Bernal’s, probably the largest of the small grocers in Lo de Marcos. There are several of these old school abarrotes in town and it seems none of them have all of the items you need. This necessitates having to cruise around to at least two or three different shops to get everything on the shopping list. Coming out of Bernal’s the bike was pretty loaded down. Mostly the beverages adding the heft. I was still missing a couple of things but after stopping at two other stores on the asphalt back street and striking out, I wasn’t excited about bouncing my load over the cobblestones on the main street so I cut my losses and headed for home.

Back at the tower, I got everything stowed then went down and swept off the roof of the motorhome. I enlisted Charlie and Luis, the kids who clean up at the property, to deliver me some buckets of dirt so I can replant my bugambilias in the nice pots that Miguel brought up to the penthouse this morning. I suppose I should feel guilty encouraging child labor, but the kids were totally stoked to earn some good pesos for a short amount of work. 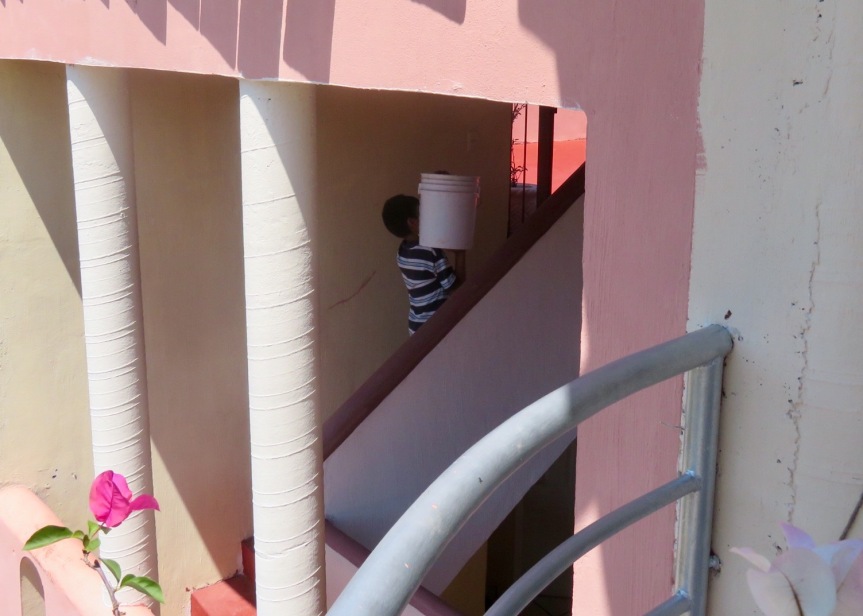 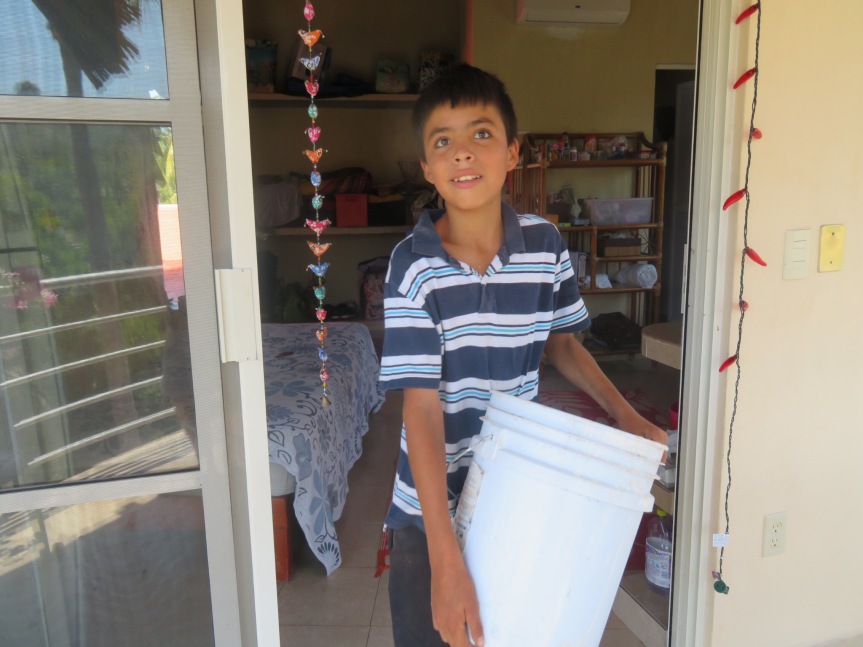 We got all three plants happily potted in their new homes, now we’ll just have to see how they do with the amount of sun or shade they get in their respective locations. Cali seems excited about the bicolored flowers of the one on the sky deck.

At three, I got kind of cleaned up and walked over to Tom and Chizuko’s (hope I got that close) to play guitar with Tom. They are an awesome couple from the east coast who spend their winters here in Lo de Marcos. They have a cool house with panoramic views of most of Lo de Marcos. We played a number of songs and I learned some new techniques and a couple of new songs. Now if I can only remember any of it tomorrow I’ll be amazed. We’ll see if we can work up a good duet and if I’m in the neighborhood next season, we can play it at the open mike. The atmosphere was relaxed and we sat and talked about a variety of things. Before I knew it, almost three hours had passed by.  I said my goodbyes and hiked back to the pad.

PJ was busy washing windows and decorating the deck. I needed to get in the water, so I walked out to the sand and jumped into the Pacific. The waves were dumping on the shore and there was a fair amount of current swirling around out front. I caught several short but fun little waves on my kick board. A few guys were trying to catch some waves at the point. The local guy on the giant lifeguard board was able to catch and ride some fun looking rollers into the shore, but the kids on the shortboards weren’t having as much luck. Another amazingly beautiful afternoon. 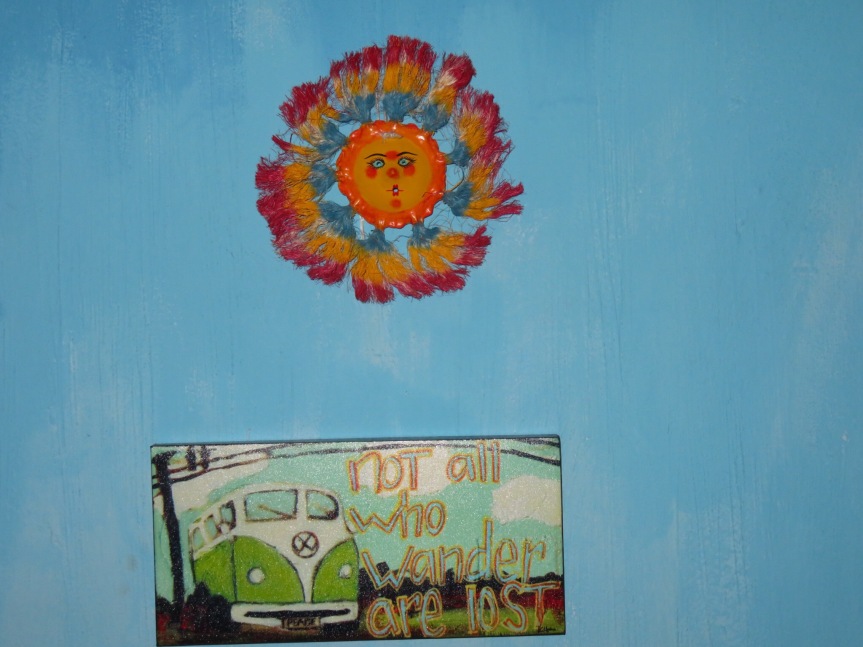 Quiet evening getting ready for a visit with friends from Bucerias tomorrow.

2 thoughts on “Guitars and Massages”