I made a cup of tea and went down to the beach to drink it and check out the surf. Seeing that the beach was pretty much empty, PJ felt inspired to surf since there was no audience. She borrowed Kara’s soft board from the rack and paddled out to the inside of the point. I put on goggles and swam out with her and pushed her into waves as they rolled in. Tom was on the beach and warned her about sea snakes, so now she was a little skeeved about running into one.

PJ caught about three decent waves that pushed her for fair ways. Mostly laying down, but she nearly got to her feet on one of the better ones. After about 45 minutes, she was getting fatigued so we went in to shore. Tom was paddling out so I decided to join him. Grabbed my board and we caught some o.k. little mush burgers at the point. I met Oliver, the kid who rents SUPs in front of Tomatina’s and got his info for pursuing that further when the ocean is calm. He had taken a group of tourists out paddle boarding around the end of the headland. They all came paddling through the line up trying to catch a wave with limited success. 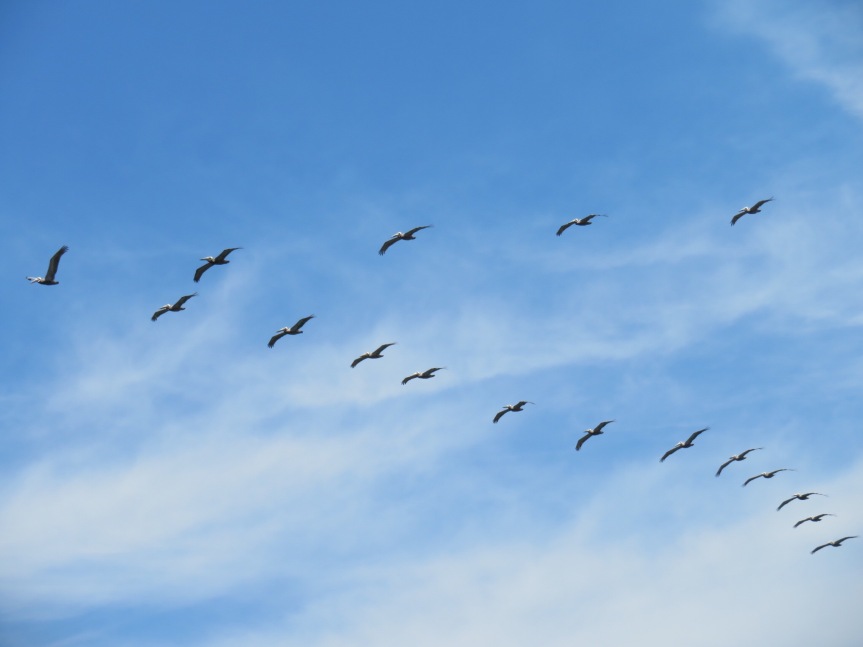 I went in and sat around by the gate drying off. Large squadrons of pelicans flowed from north to south in big vee formations catching an updraft from the tall trees on the point and then disappearing around the corner. Kara came down to surf and we talked for a few minutes. Ward came out to have a look at the beach and joined the conversation. He drove down from Canada on a motorcycle pulling a trailer. He’s been coming and going since arriving about three weeks ago leaving the trailer here so he can travel around Mexico unencumbered.

PJ came back out with the dogs and turned them loose. Kara paddled out and caught a few waves while I had a look at Ward’s set up. The trailer folds out to make a bed with a full tent and vestibule set up. I guess it’s too much hassle to erect the thing because he sleeps in a small tent rather than set it up.

We ascended our tower and reheated a couple of tamales then did a few domestic chores. I practiced guitar and did a few things on the computer. Tom showed up at 4:00 and we played guitar for a little over an hour. Lots of fun putting together a small set of songs that we can play together. A nice breeze passed through the north balcony as we sat in the shade next to the hammock making noise. Music interspersed with interludes of conversation and too soon, Tom had to get ready to head into town. 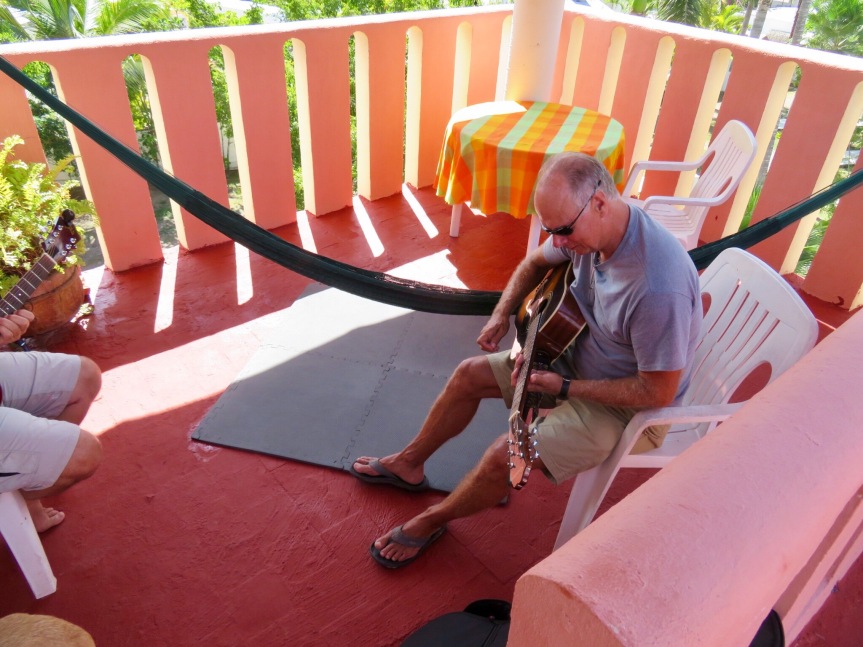 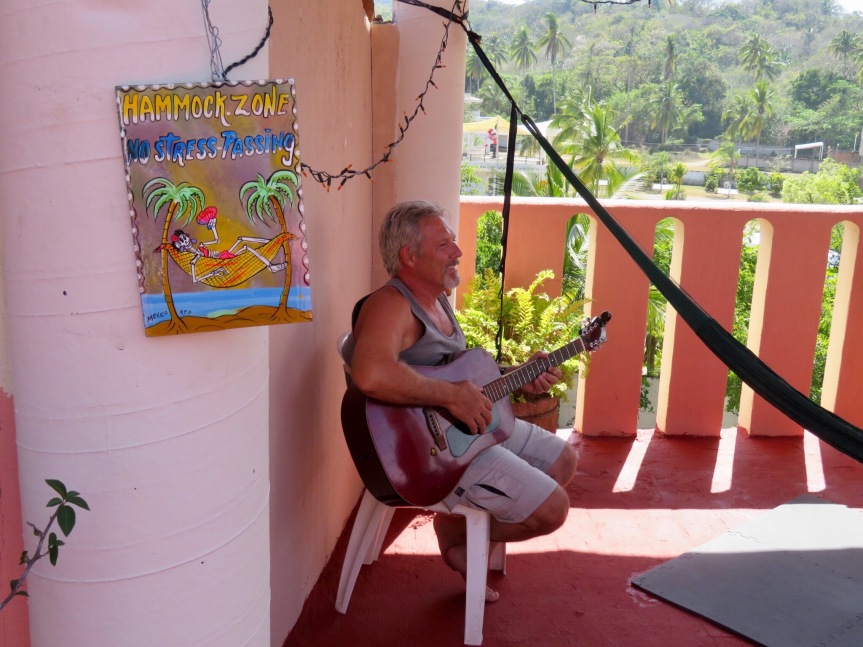 I said hello to a couple from Leucadia who had just arrived then pulled my bike off of the rack on the RV and pedaled into town where I caught up with PJ hanging with a group of our friends. We headed over to the library for the Wednesday night meditation group. There are still around 15 people showing up. We meditated for maybe half an hour then had a little discussion afterwards. Said farewell to some of the folks who are leaving in the next few days then pushed the pedals to move our bikes over to the zocalo. 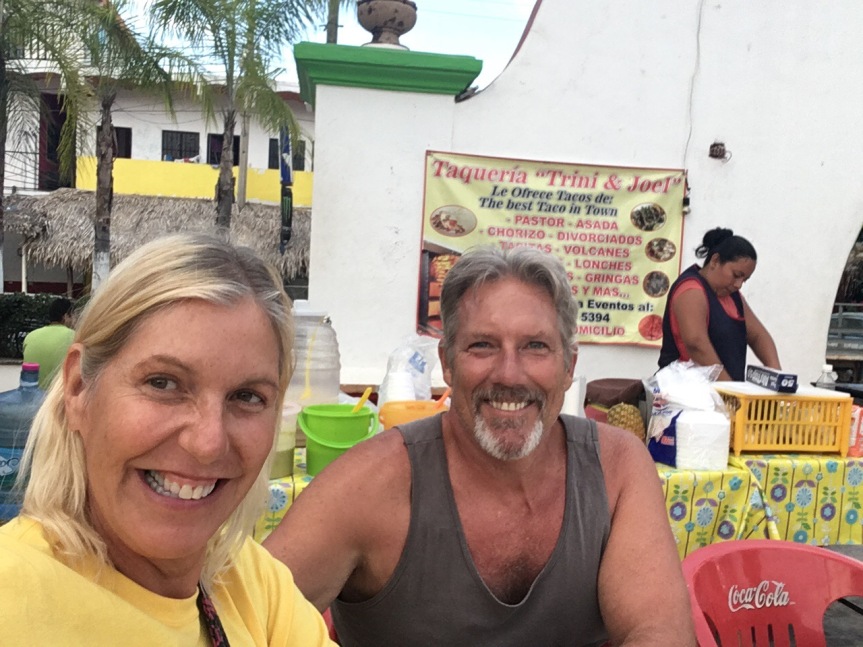 On Wednesdays, there is music in the square and vendors set up carts with all kinds of food around the plaza. The band was warming up on the stage as we ordered up a quesadilla for PJ and some tacos for me. Freshly pressed and heated tortillas with a nice spread of salsas and sides. We joined a Mexican family at the table and watched the scene unfold. Kids jumping around on the inflatable fun houses, teenagers flirting and once the music starts, o.d gringos dancing.

The family dining with us bade us ‘buenas noches’ then Tom & Chuziko arrived at the square and joined us at the table. They were ordering up tacos when Memo showed up and had a seat. The five of us talked for a while until the band started up then all conversation was impossible. We kicked back and listened to several songs, then said adios and headed home. 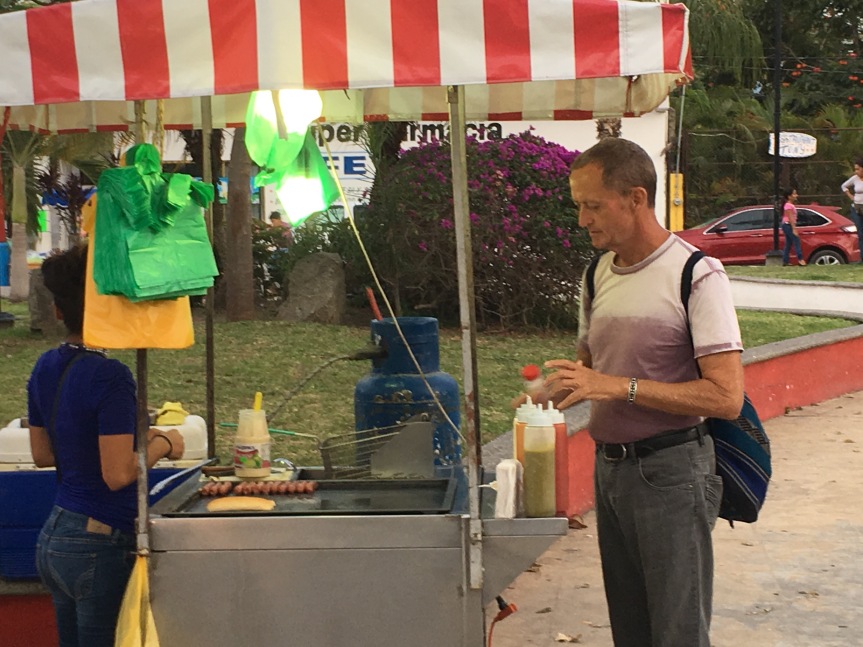