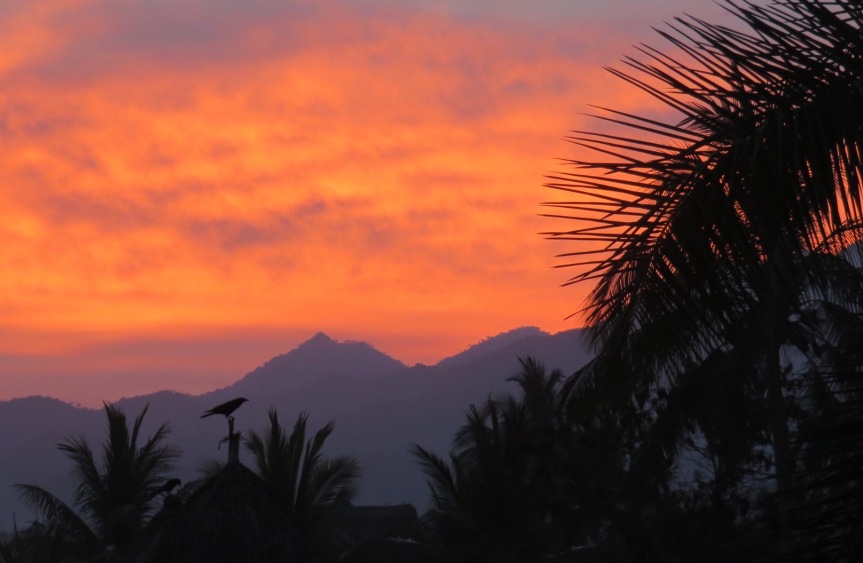 Cali was restless and waking up the house from 4:30 on last night. I took her down for a walk around the complex at around 5:30 but that didn’t seem to be her issue. Came back up and went back to bed but sleep was elusive. I finally gave up at about 7:00 and got up to watch the sunrise. The sun here doesn’t really show itself until a little after seven so I had a cup of tea and watched it come up over the mountains. 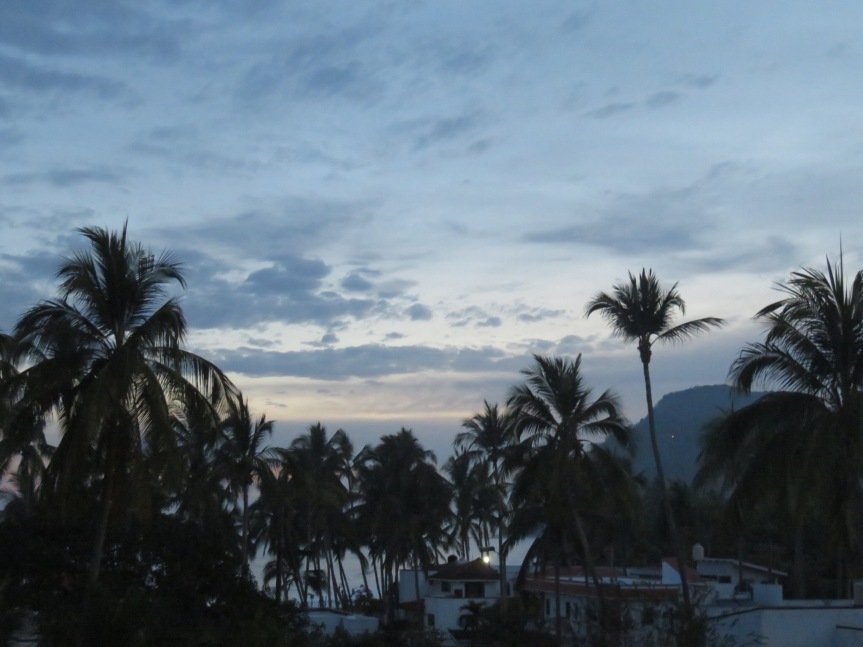 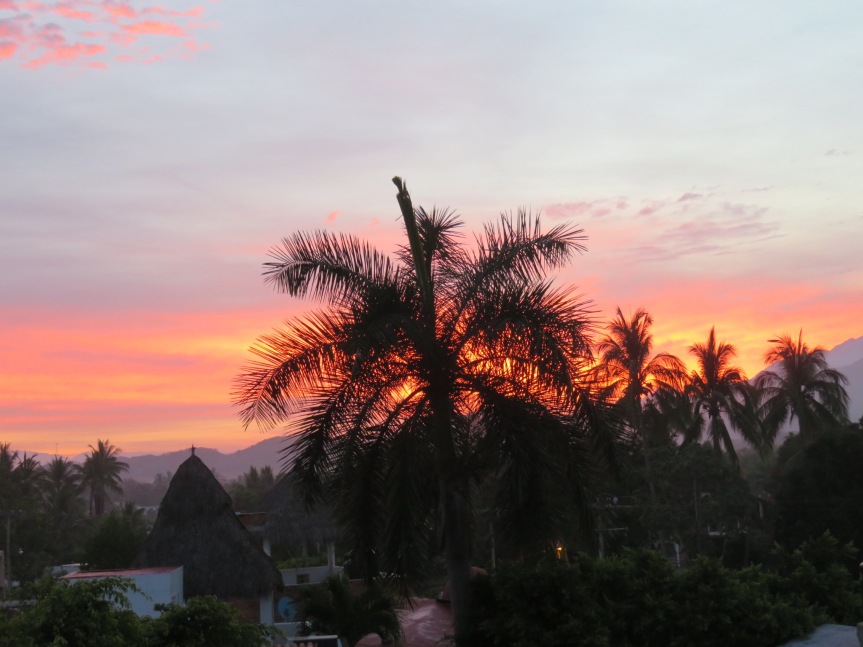 Took the dogs down to the beach. Cali got all insecure and huddled next to the gate refusing to go any further while Koda and I walked around the point. The air was cool with not too many people out and about. We hurried back up to the loft and got ready for Bryce and Arlene to pick us up to go into the La Penita tianguis. They arrived shortly after 9:30 and we piled into the SUV. Susan was along for the shopping trip too. Today feels like a holiday, almost like a day off of work. Oh, that’s right, I no longer go to work. We drove on down to La Penita and lucked into a parking space right in front of the Thursday market. 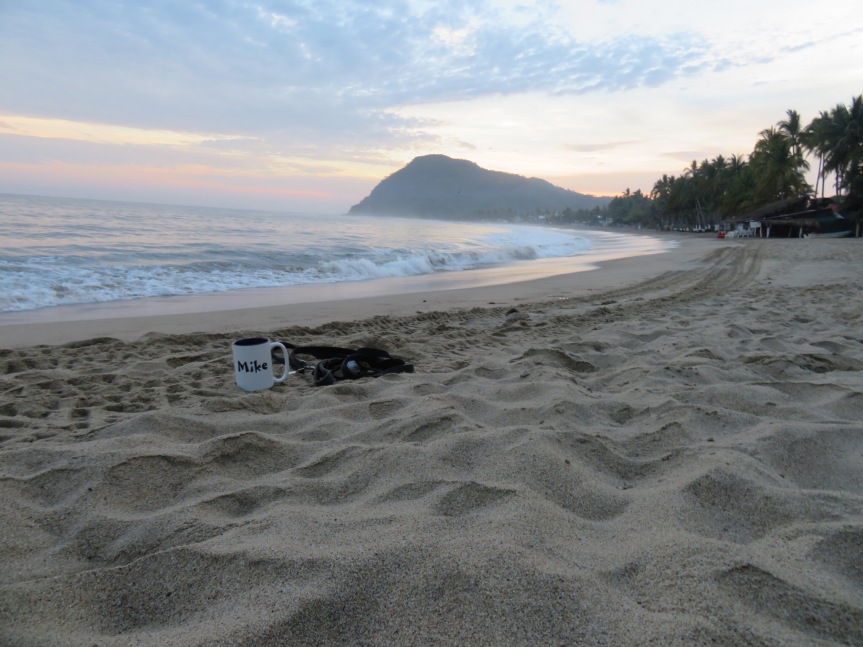 The street market always has a carnival atmosphere, but today’s was a little more subdued as a large number of the gringos who usually attend have already returned north for the season. We strolled into the market and quickly the shopping commenced. The ladies all bought hipster style purses like the one I bought last time to carry my extra hooks and pliers when fishing. Shirts, baskets, corn husk flowers, bedspreads, and a new cane for Bryce. All that and lots of other small items. Not to forget the freshly candied garapinados that Oscar was cooking up near the entrance. It was a spree for all, especially since the Canadians are heading back home soon. We stumbled upon a number of friends from Lo de Marcos spending their hard earned pesos here also. 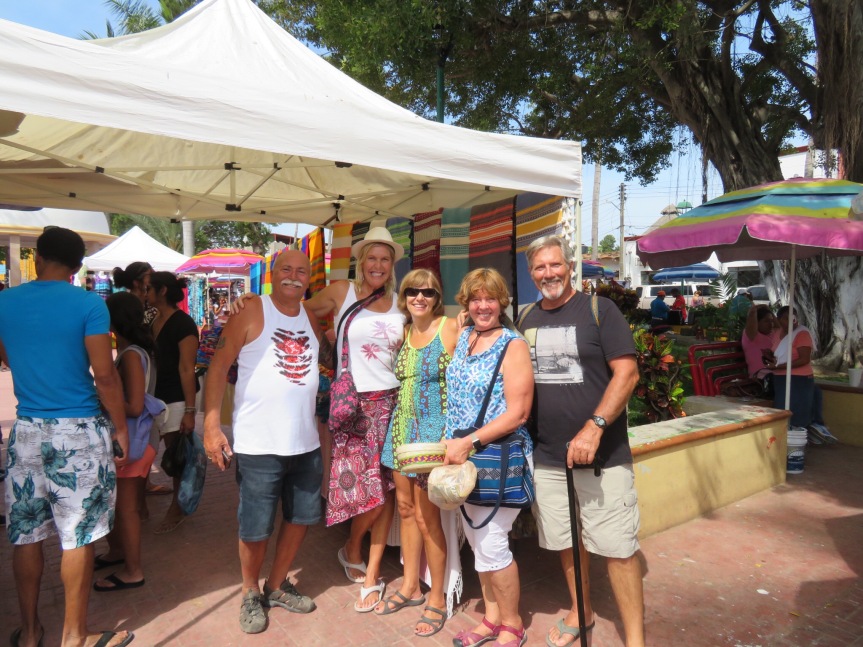 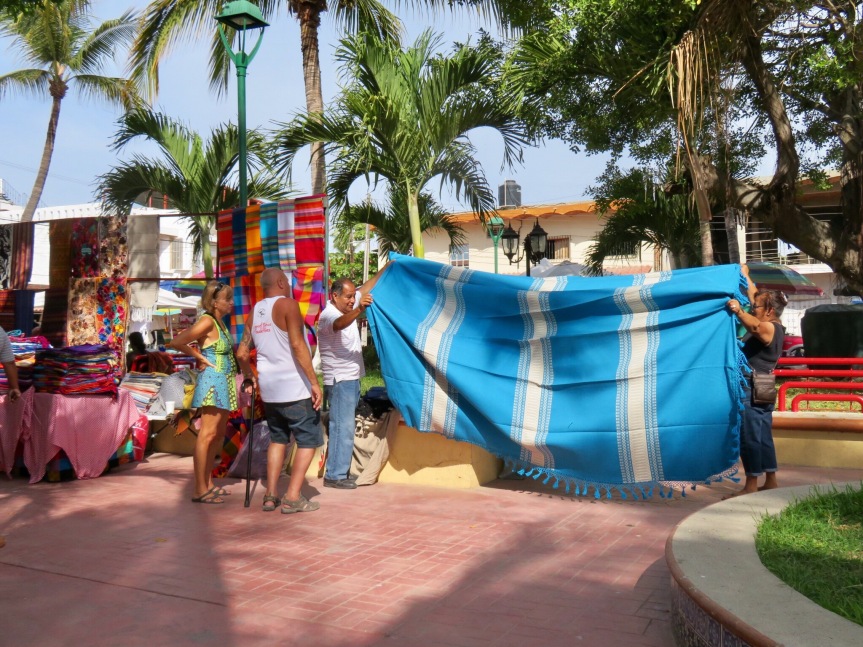 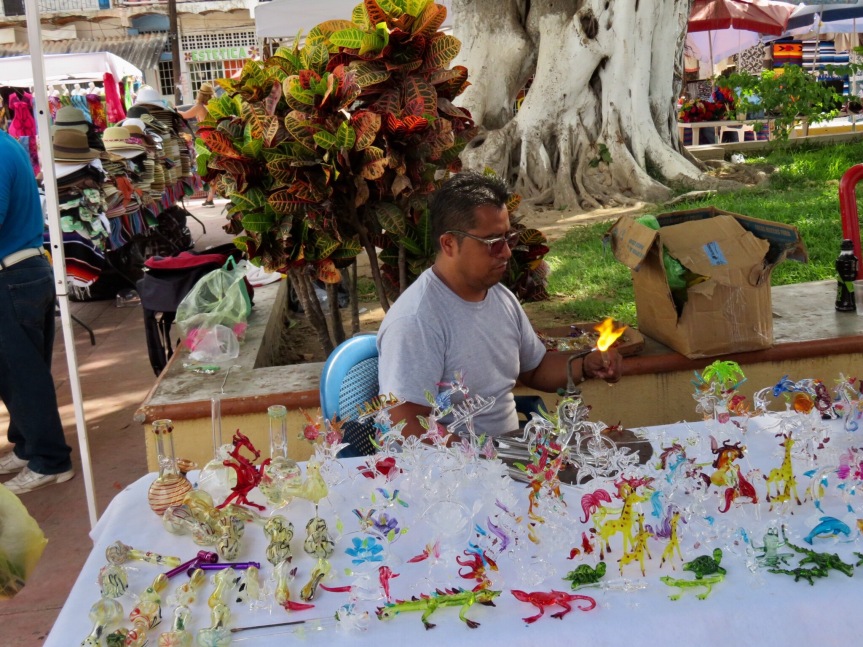 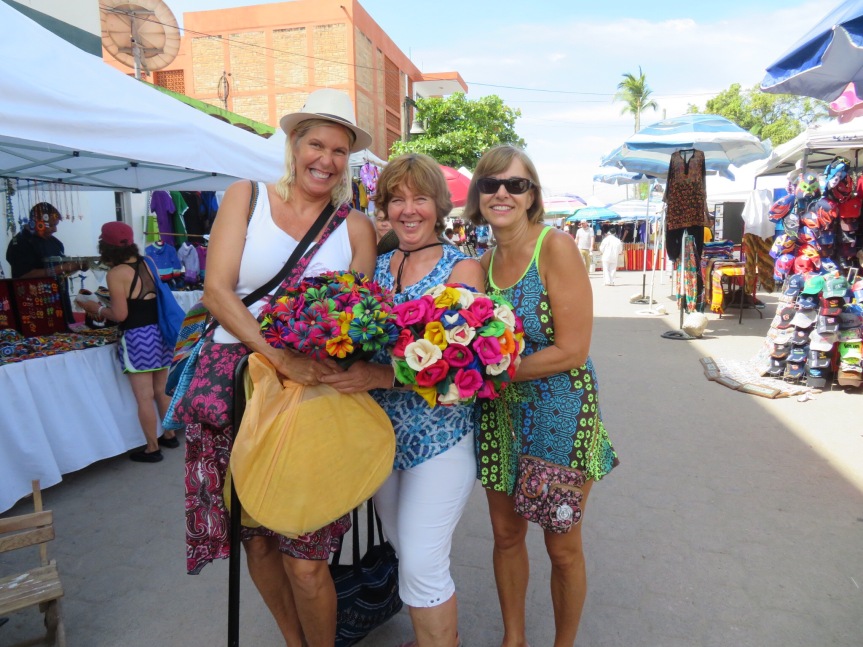 After about an hour and a half of this madness, we stashed our purchases in the car and walked down to the waterfront. Frigate birds were everywhere, gazillions of them! They are always awesome to watch, gliding so smoothly and effortlessly. The morning was warm but a light sea breeze kept things cool, particularly in the shade. The crew wandered independently for a few minutes taking tons of pictures – the birds, old boats, salty fishermen. The beachfront here isn’t resort style. Things are a little crusty beneath the surface but it adds to the pirate like charm of the area. Lots of panga style boats in various states of repair, many filled with fishing nets and rebar anchors. 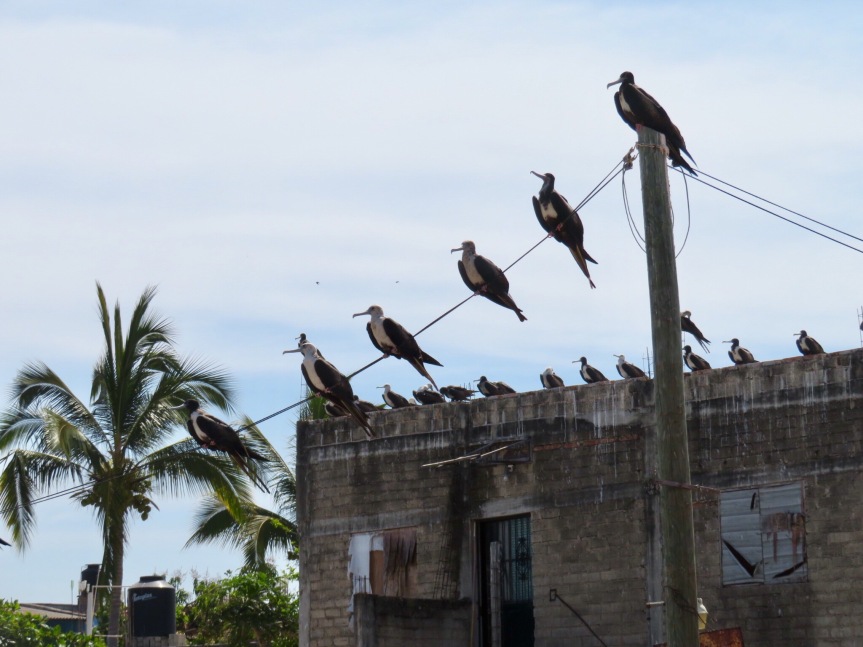 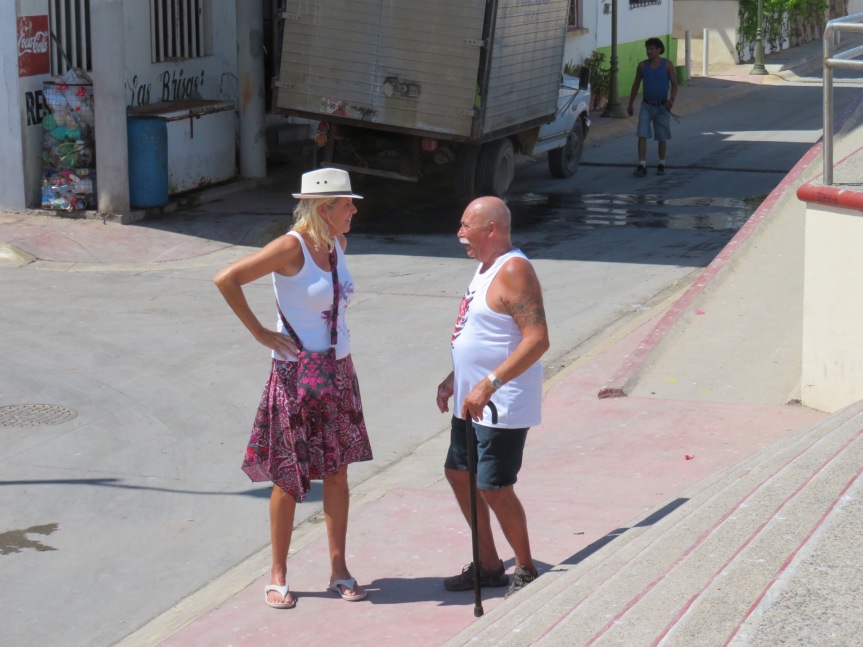 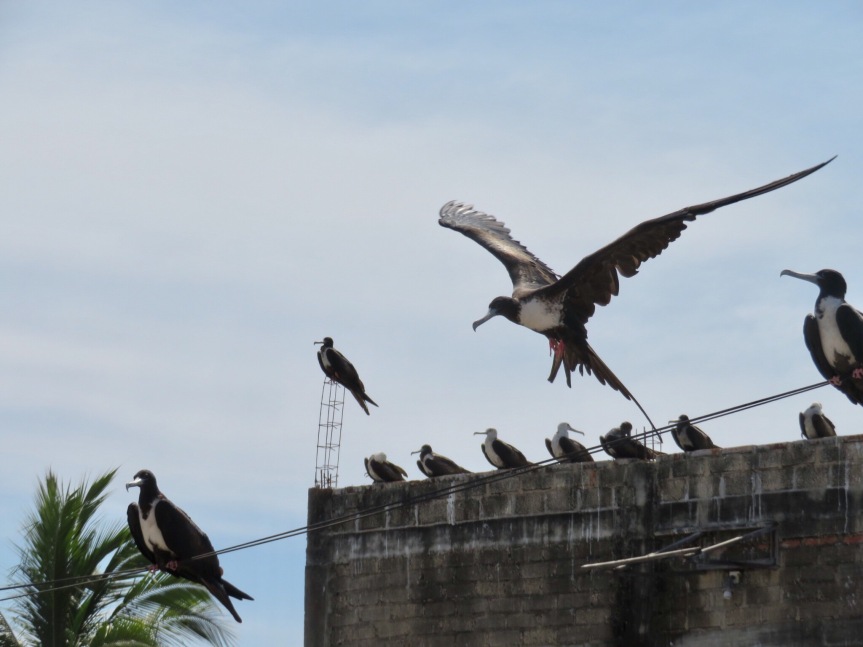 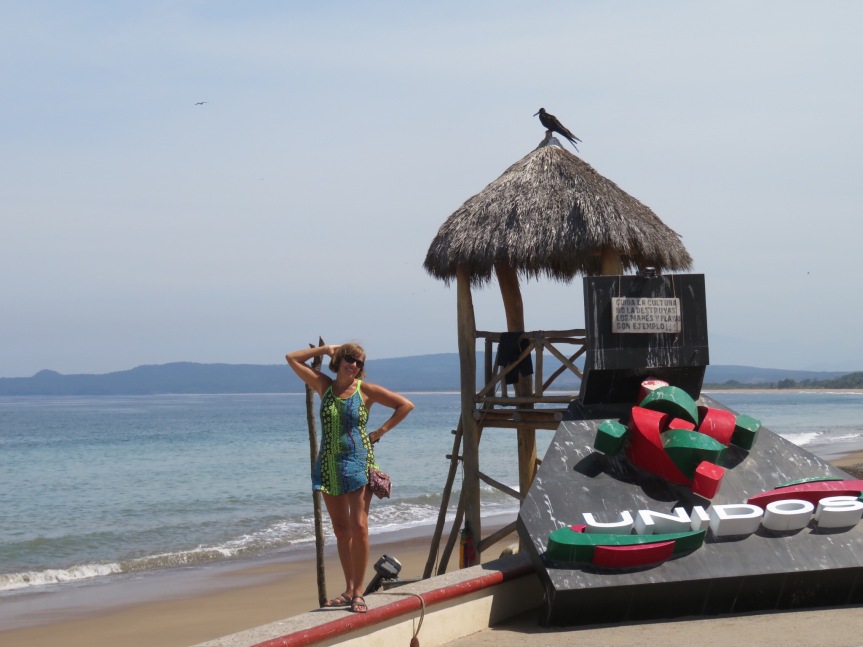 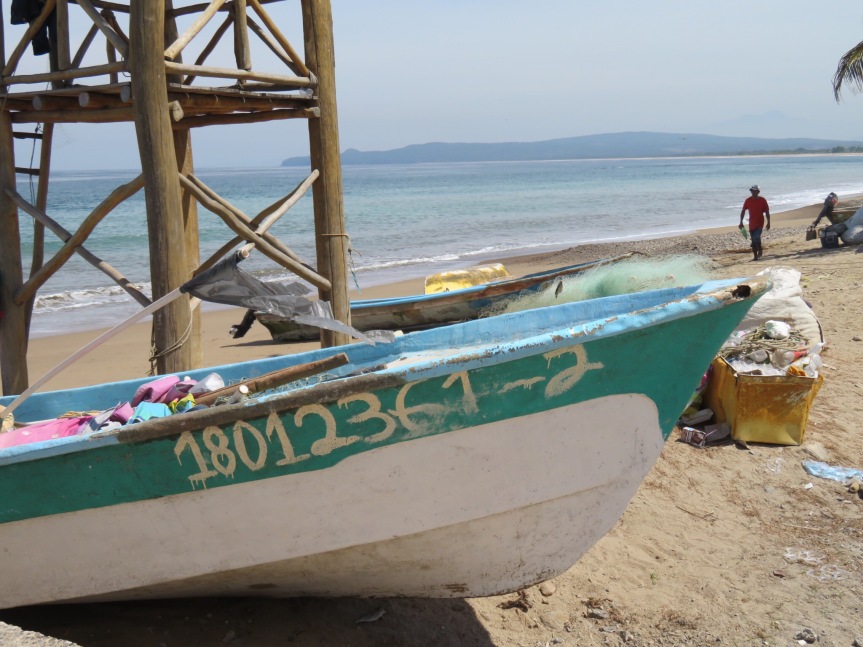 A panga came ripping by close to shore and the passenger leapt off without the boat slowing a bit. The wet fisherman waded ashore casually as if this is his normal way of disembarking on shore. We spotted a beachfront restaurant on the second floor of building on the main road paralleling the beach and decided on lunch. 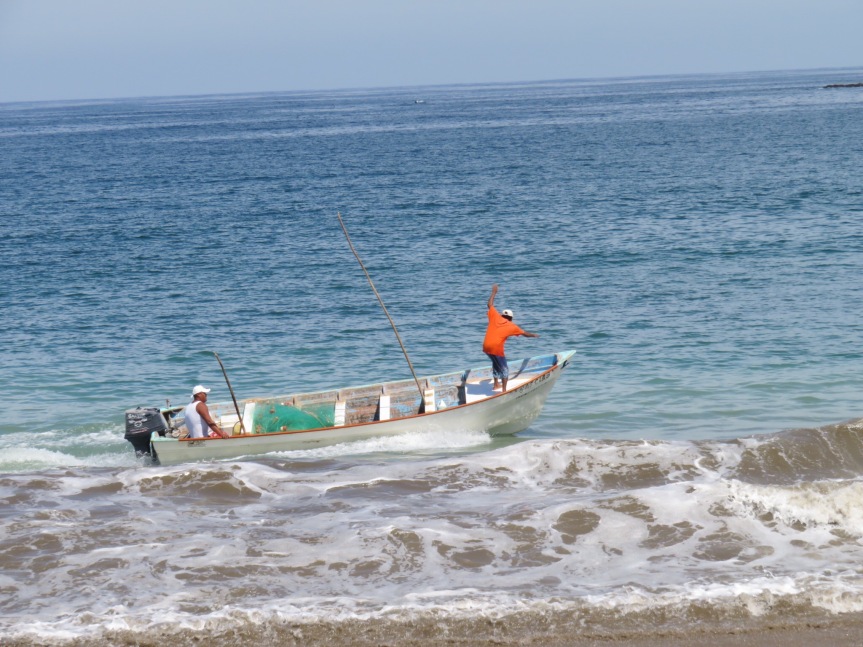 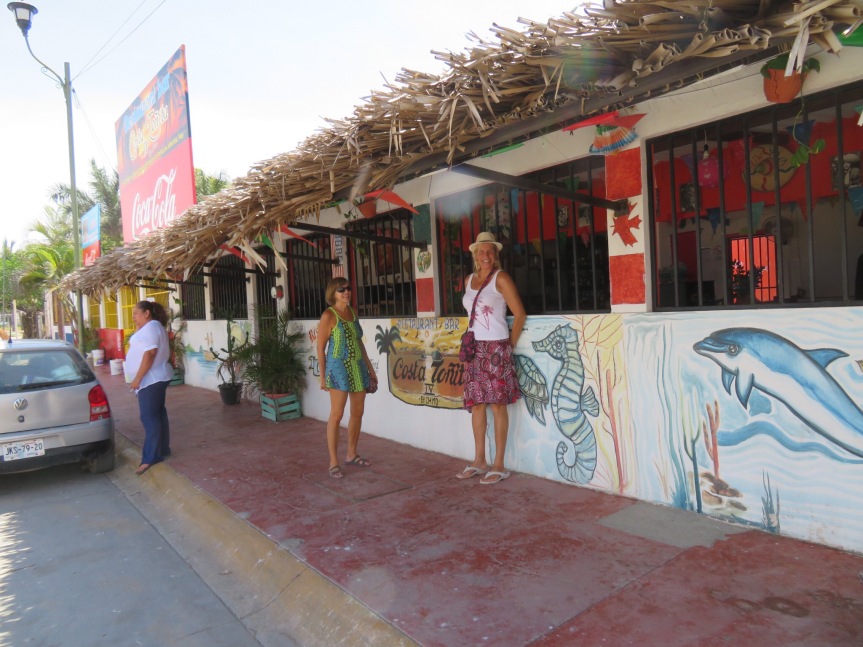 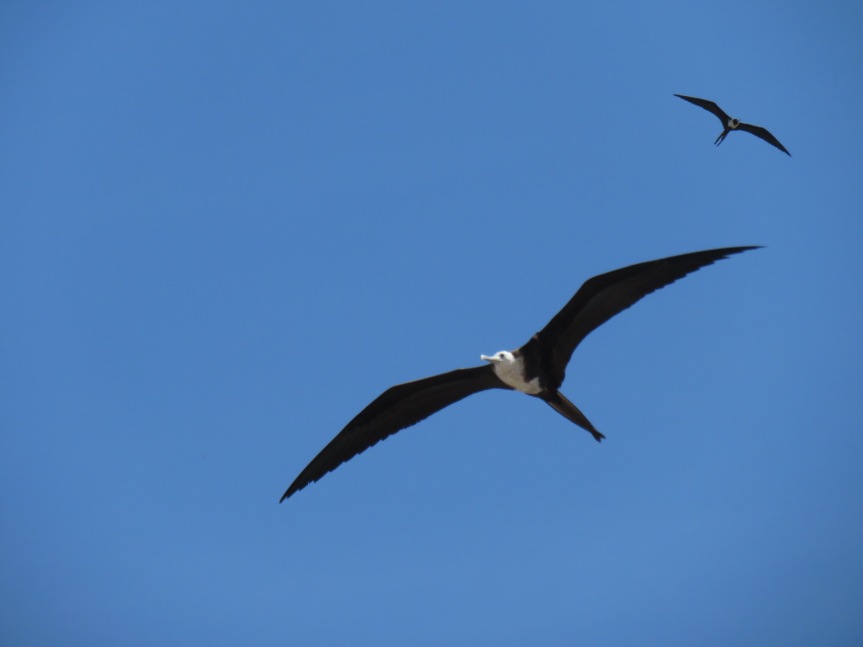 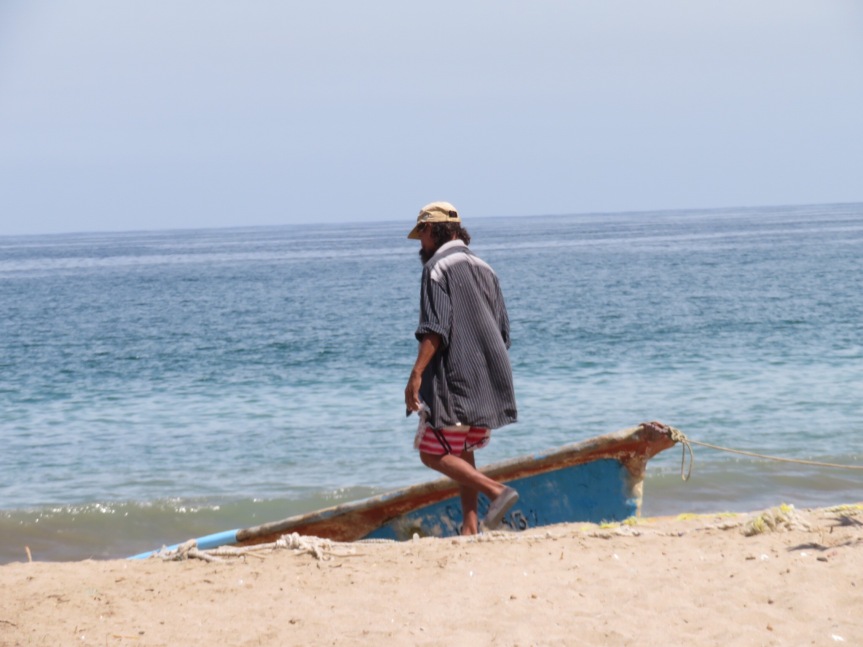 Unobstructed vistas of the beach and an eye level view of the perching frigates. The seafood was great and plentiful. I had octopus sautéed in garlic sauce and pinched a couple of PJ’s shrimp. Never a problem keeping a conversation rolling with this group. The time passed quickly and Susan reached out and snagged the bill this time. We all tried to protest as we always do, but she wasn’t hearing it. Thanks again for an amazing lunch. 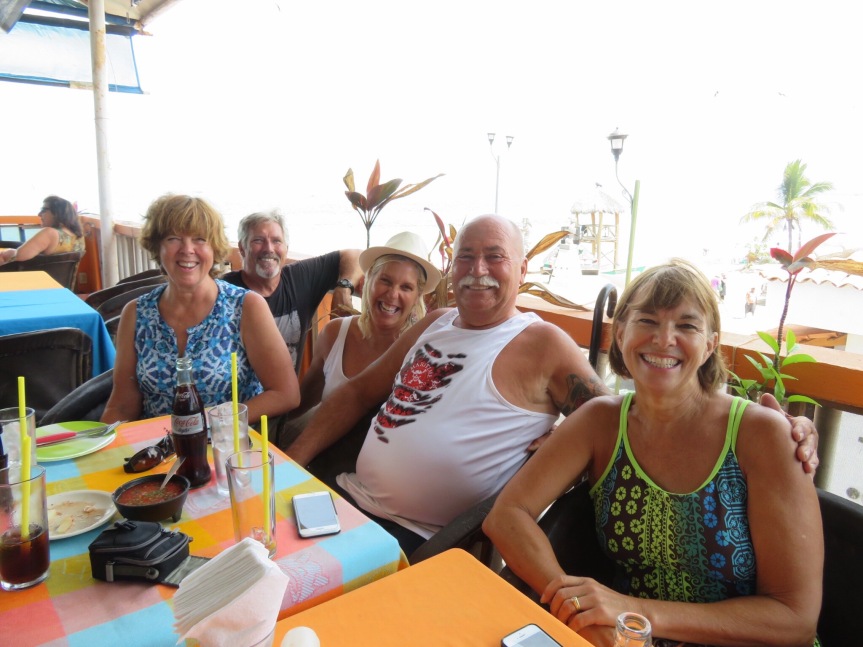 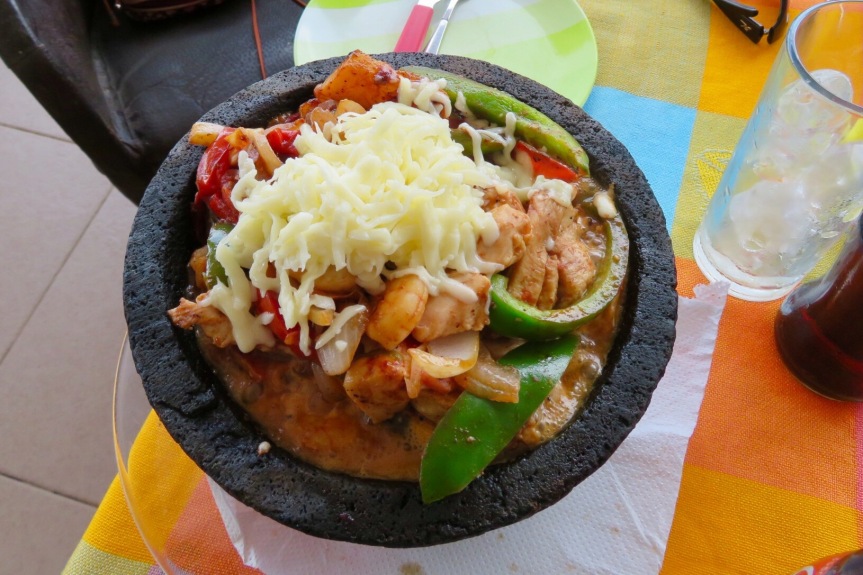 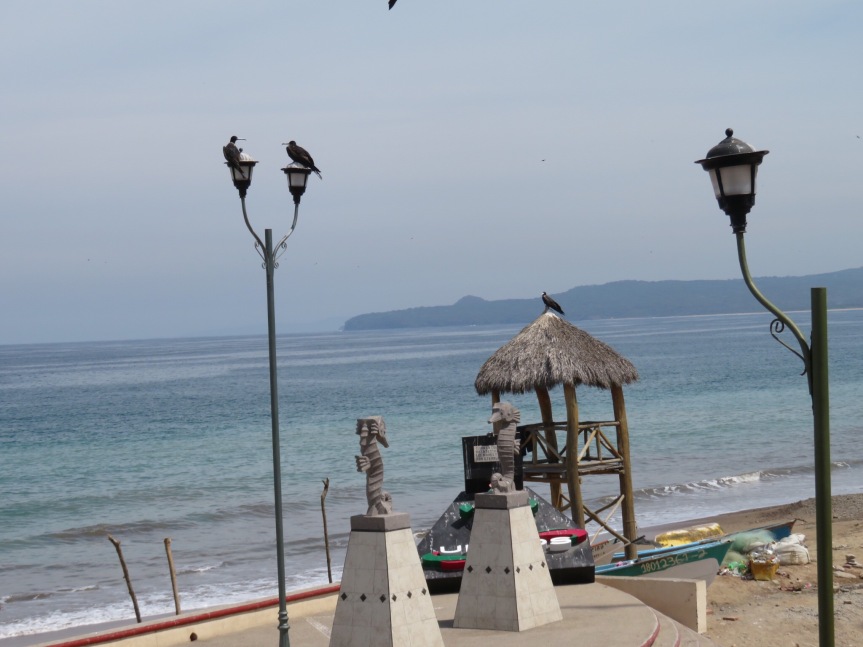 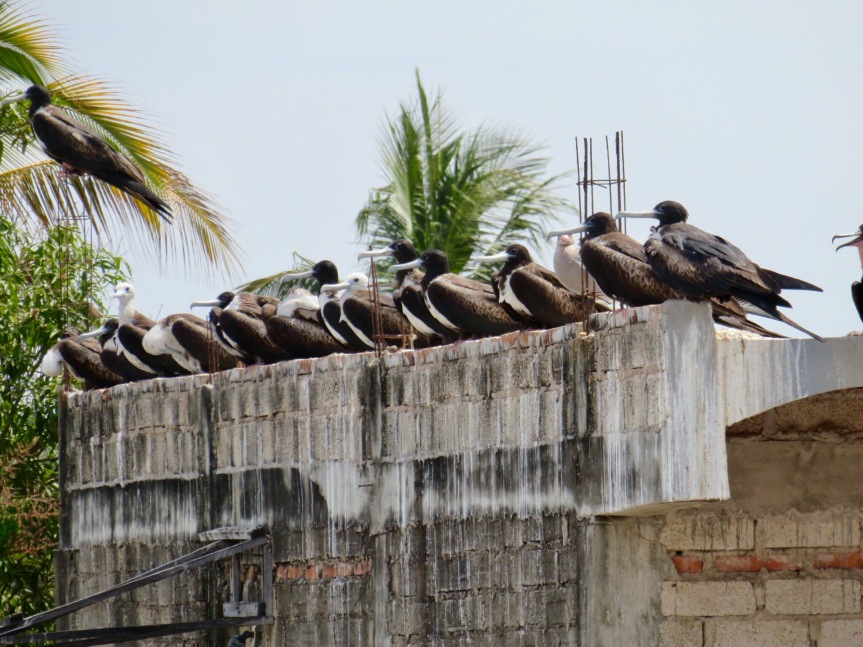 Moving a little more slowly, we made our way back up the street and made a stop in at Hala’s hammock store. Gregarious as always and filled with seemingly endless energy, she helped Susan pick out the right hammock to take back to Alaska. PJ has been wanting a hanging hammock chair and since her birthday is only a few short days away, she convinced me it would make an excellent early present. She picked out a sweet golden colored number and we wrapped it up and paid the lady. I bought a small fruit and vegetable hammock for the kitchen and we were on our way back to the car. 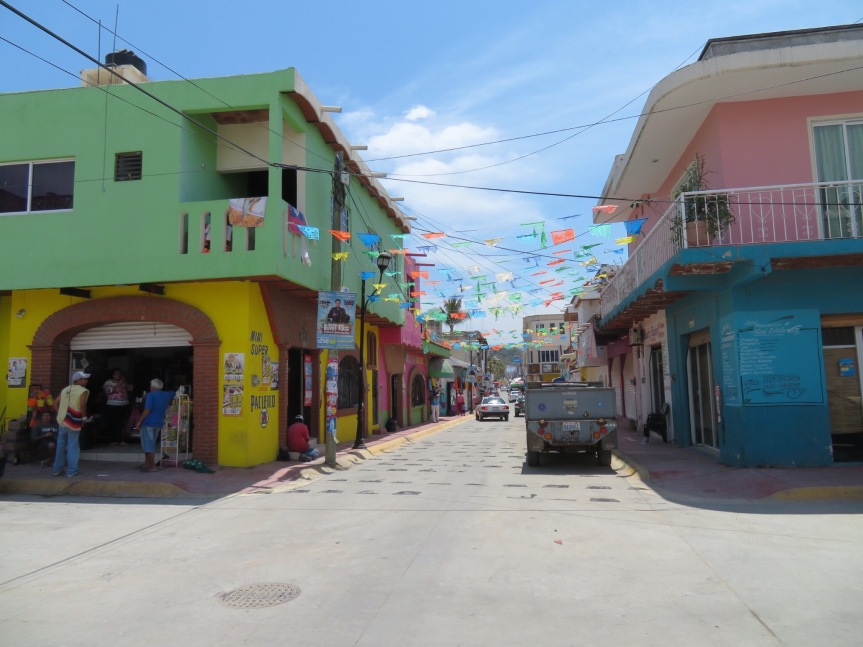 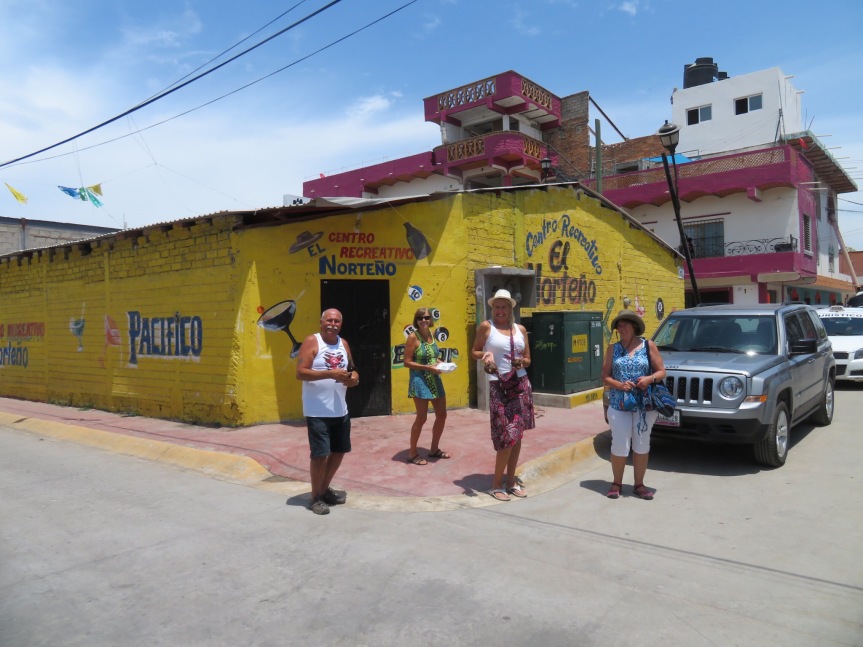 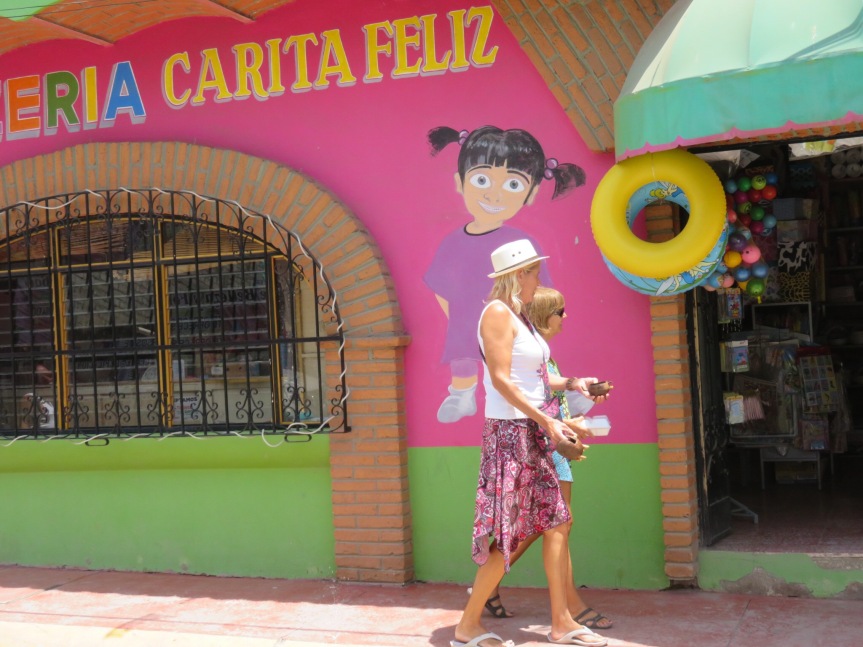 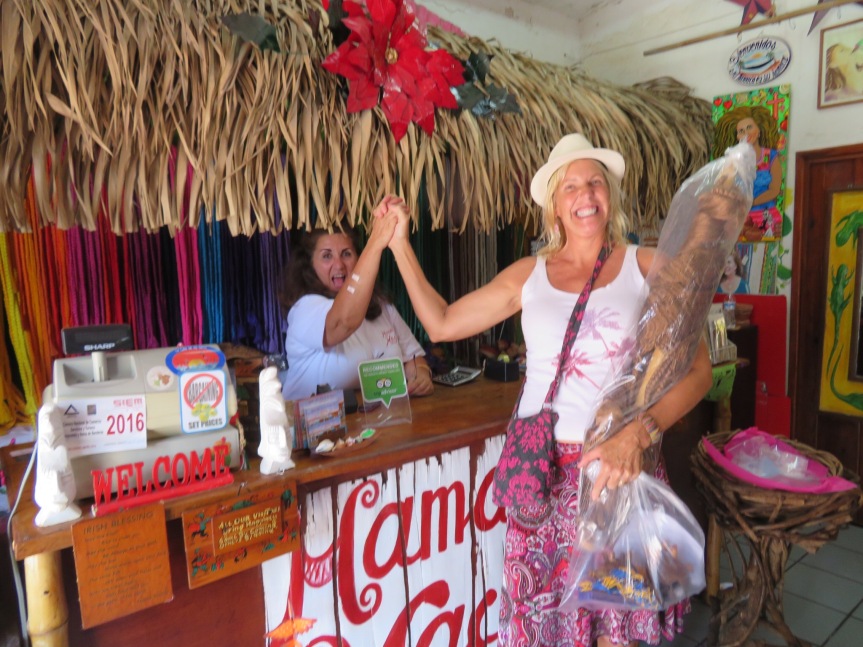 Not quite ready to head straight home, we did a swing through Rincon de Guayabitos to see how things were going in town. Not too much activity. The calm before the Semana Santa storm. We got Bryce to stop at a market with some beach toys and bought a couple of noodles to use for the floating net beach chairs that PJ had been carrying with us since leaving Carlsbad. Back out to highway 200 and a beeline home to El Pequeno Paraiso. We were left at our doorstep with hugs all around then trudged up the steps to unload our cargo. 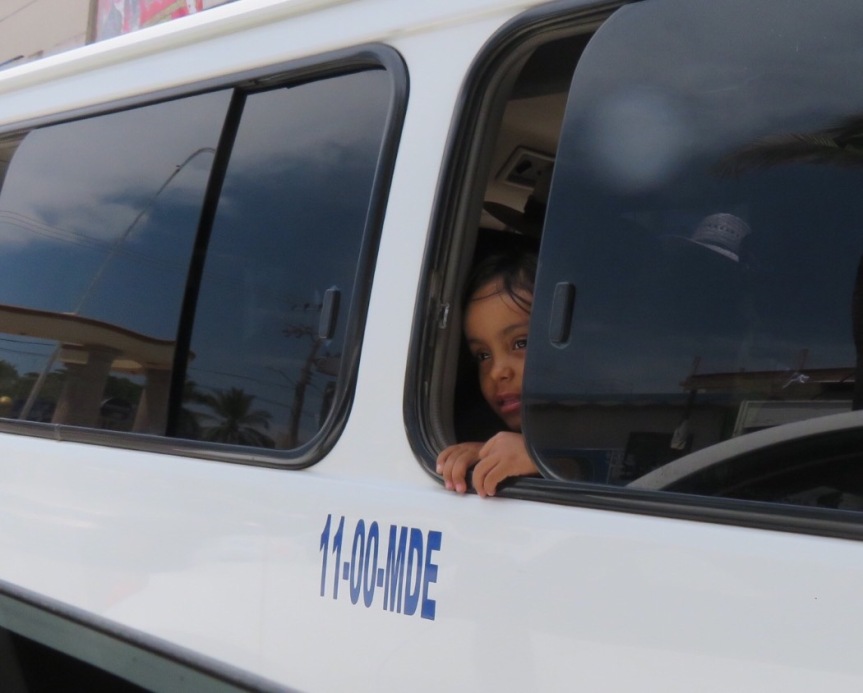 Koda and Cali made it clear that staying in the casita was not an option, so we leashed them up and took them for a paseo along the beach out front. Hot and sweaty from our day of activity, I jumped in the water with my kick board while PJ put the pups away. When she came back down, we donned our goggles and I put on my bright yellow cap to hopefully be seen by returning fishing boats. Then we swam down the beach to the right going a little bit past El Caracol. Pamela’s swimming improves every time out, strong and fast. We went for close to half a mile, a new best for PJ. On the return leg, we noticed Mark and Laura out by the boats so we swam out to meet them. They are leaving Saturday heading back to the Bay Area. We all swam back to shore where we wished them safe travels. Hasta la proxima vez, nuestros amigos. 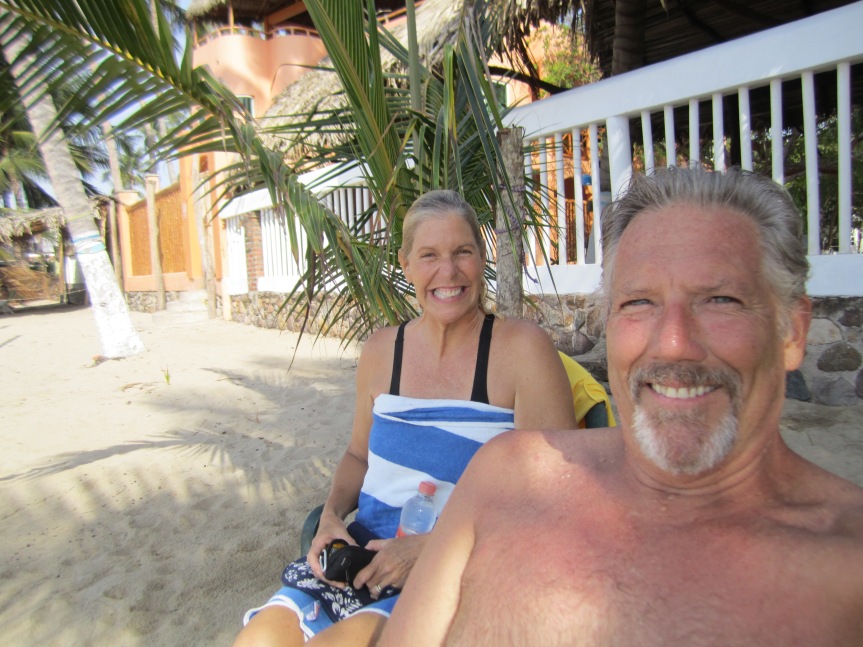 We traded the goggles for boogies boards and caught a bunch of snappy little waves. Each ride would end in water so shallow that I’d have to try to swing my legs underneath myself and land on my feet to avoid being washed up on shore. Lots of fun, too much sun and we finally went in and sat ourselves down in the plastic chairs by the gate next to Ward. Tom and Chuziko came by and sat with us then Larry and Judith came for an afternoon swim. Busy day of social activity for us two isolators. 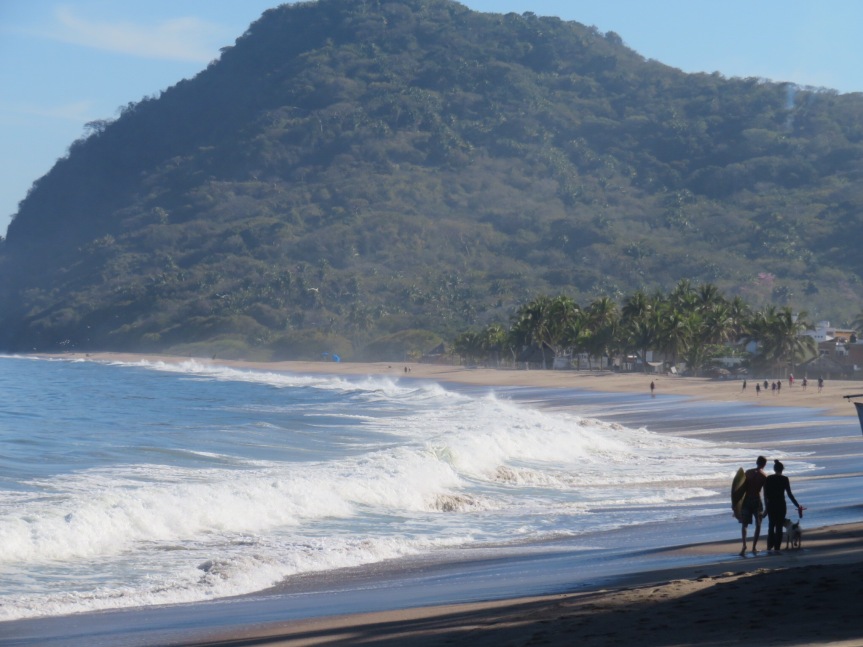 It got to be time to feed the pups, cook up the triggerfish that Bob had given us, then take the hounds for a final outing. Lack of sleep, lots of activity and too much sun, all the ingredients that should make for a solid night’s sleep.