A very happy, happy birthday to my sweet wife. 9 months on the road and still going strong. PJ started her morning by going to a Pilates class at another expat’s home. While she was gone, I learned how to play Las Mananitas, the Mexican birthday song, from a video on YouTube. I sang it to her from the balcony when she returned home.

There were some clean little waves pushing through at the point this morning and PJ decided that she was going to surf. That got me inspired since I was moving really slow from being up at 2:45 when the RV alarm went off and I ran over to Cruz Maria to check in on Lexi. There didn’t seem to be anything amiss, but after that I had a hard time getting back to sleep. Some bombs went off 6:30 this morning that had Cali clawing her way into the bed. PJ took them into the other unit that is a little more sound proof.

Anyway, PJ paddled out and caught several of the inside rollers getting closer each day to maintaining an upright stance. I passed through Cruz Maria paying up the rent and grabbing my board out of Lexi. I joined her out in the surf just as Tom was paddling out for his last surf before flying home tomorrow. We traded waves and I actually caught a few really fun rides. I was able to get to my feet a little quicker than he last time out despite the hip crackling like a campfire.

We dried off and I cooked up a birthday brunch while PJ potted some plumeria cuttings she picked up off the roadside. Just as I thought the camp was clearing out, a bus pulled in and unloaded a pig pile of city folk. They dispersed throughout the grounds and soon makeshift shelters were popping up among he trees. Several new families moved into the tower as well. Not nearly as crowded as it was. We’ll see how this batch of visitors pans out.

A major nap was on the afternoon schedule then we rallied and hit the beach break with boogie boards. There was a decent sized crowd down on the beach. The new group had erected a beach camp complete with giant speakers to share their refined taste in music with rest of the world. We caught a number of slamming little closeouts breaking in about a foot of water dodging kids in inflatable rings.

We took the dogs for a walk in a vacant lot up the hill. More fireworks blasted through the evening air causing Cali to pull like a tractor for the house. We saw a large Mexican beaded lizard, one of only two venomous lizards in the western hemisphere. He was checking us out from a small embankment deciding if the dogs might make good eating. We headed for home, enjoyed a nice dinner then watched The Wrestler with Mickey Rourke on the Sundance channel, one of the four channels we have in English. 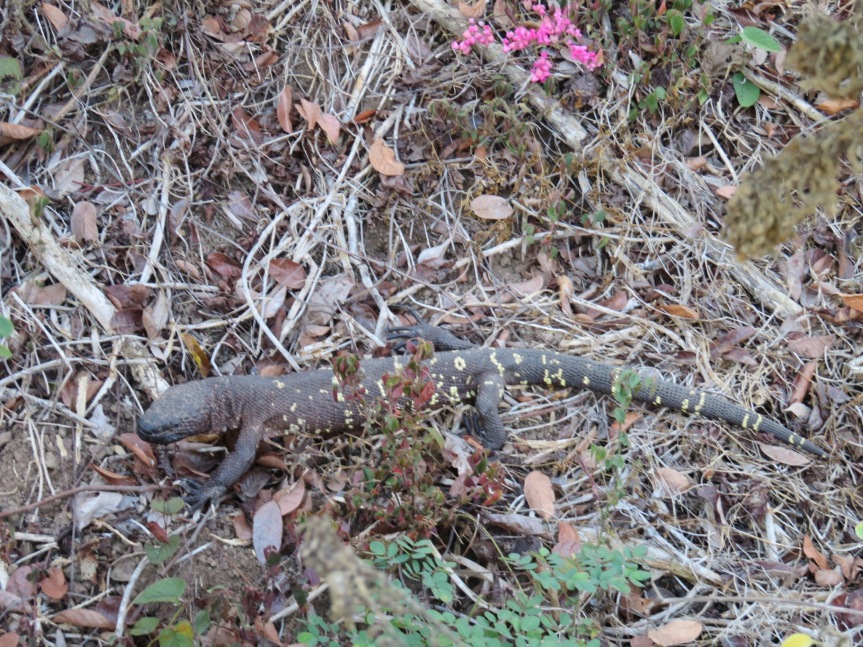 Tonight was the opening night for Lo de Marcos celebrations and the music coming from the square is super loud. It’s about a km away and it’s as if the band’s in the room. Must be blowing out the people right next to it. Much to Cali’s dismay, there was an eleven o’clock fireworks display with some pretty decent pyrotechnics. PJ and I went out on the terrace and watched. Looks to be another long, noisy night. Happy Birthday 🎉 sweetheart ❤️.