Long, hard day in the saddle. It amazes me the amount of time it takes for me to get anywhere down here in Mexico. I started the day early. Loading the last of my things and going through the rooms a final time. I sat on the balcony having a quiet breakfast and enjoying the peace. The Last Breakfast. 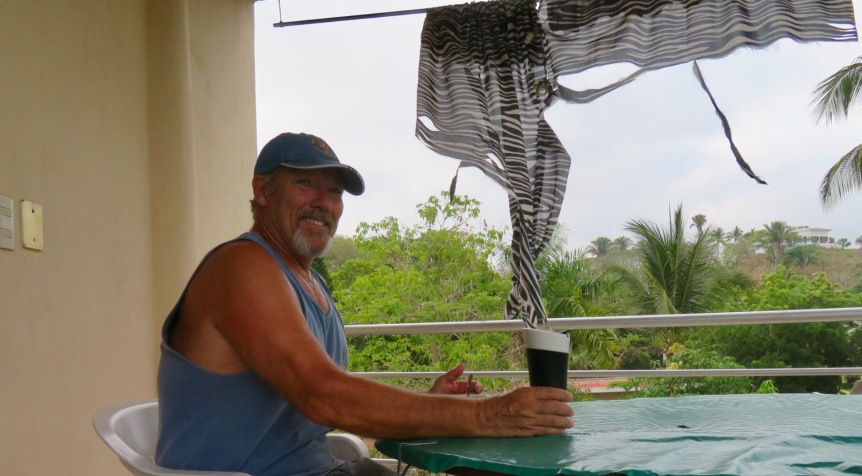 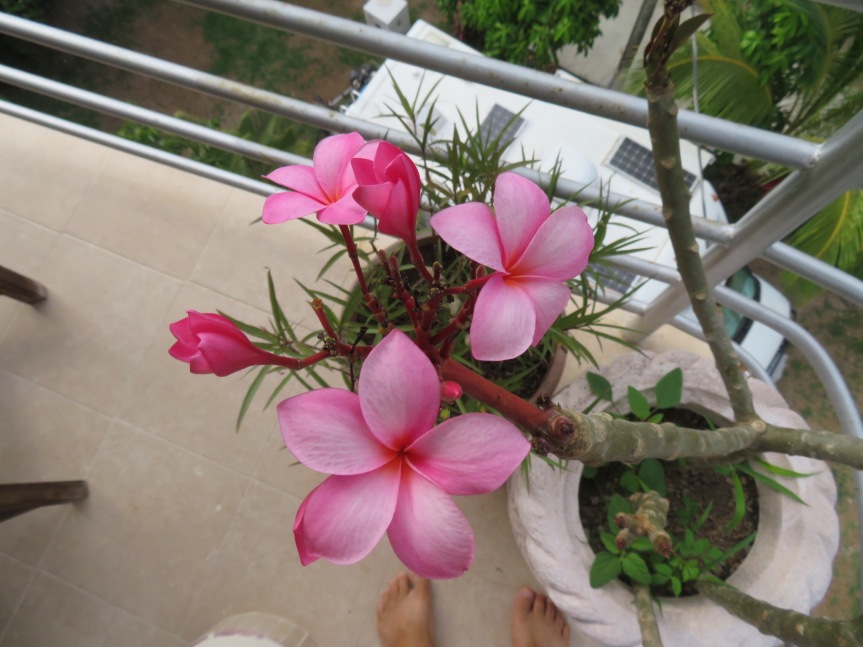 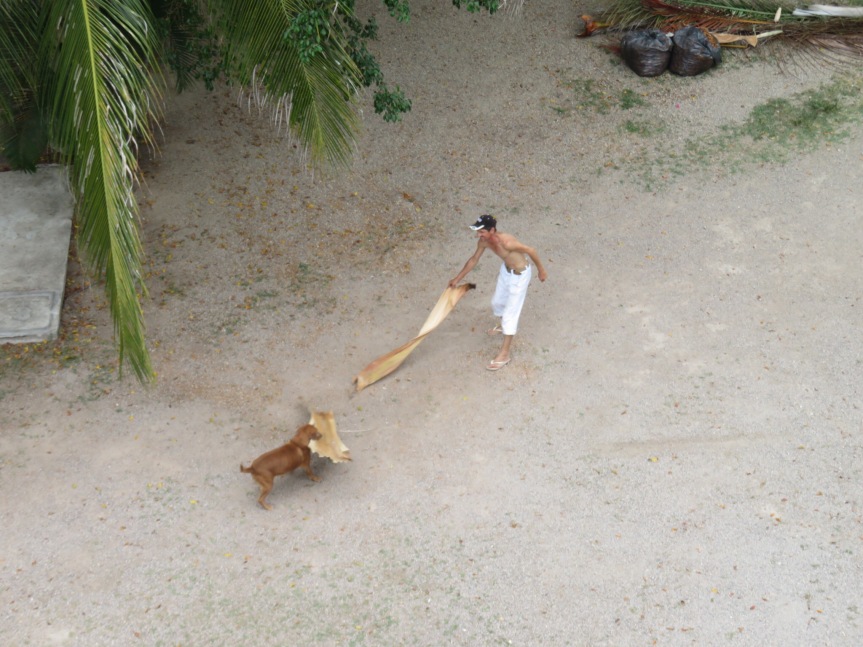 I carried the last load down bringing the dogs with me. We went for our final walk in Lo de Marcos up the hill towards Larry and Judith’s. I was being extra attentive to the sights, sounds and smells around me since it is my ‘last day’. As I was thinking this, I decided to dedicate myself to treating every day the same as the last day. Why walk through the world with my eyes closed one day and then be all aware the next because the day is to be considered somehow different.

Did a final walk around of Lexi. Bernardo dropped off my freshly sharpened machete, then I said my farewells and rolled out of the little paradise, El Pequeno Paraiso. As I was gassing up, I realized that what I thought was dirt in the center of the windshield is actually paint overspray from Cesar’s repair on the front door. 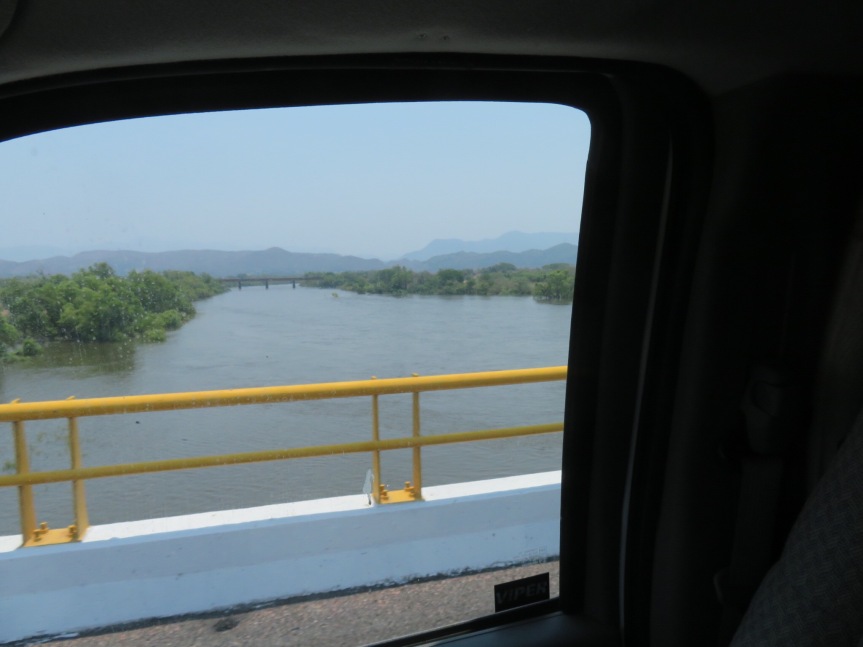 Drove through the local areas I know and then after Las Varas, I was on unfamiliar roads rolling towards Tepic. Lots of climbing. The engine temperature stayed in a safe range on the gauge, but my feet were getting cooked. I don’t know if I’m short on insulation but I imagined I smelt the crackling starting to sizzle. I became one in a hundred vehicles joining a soul train behind a cane truck. I’d seen the cane fields getting burnt and harvested earlier. Finally I worked my way up the chain and got my shot at passing too. 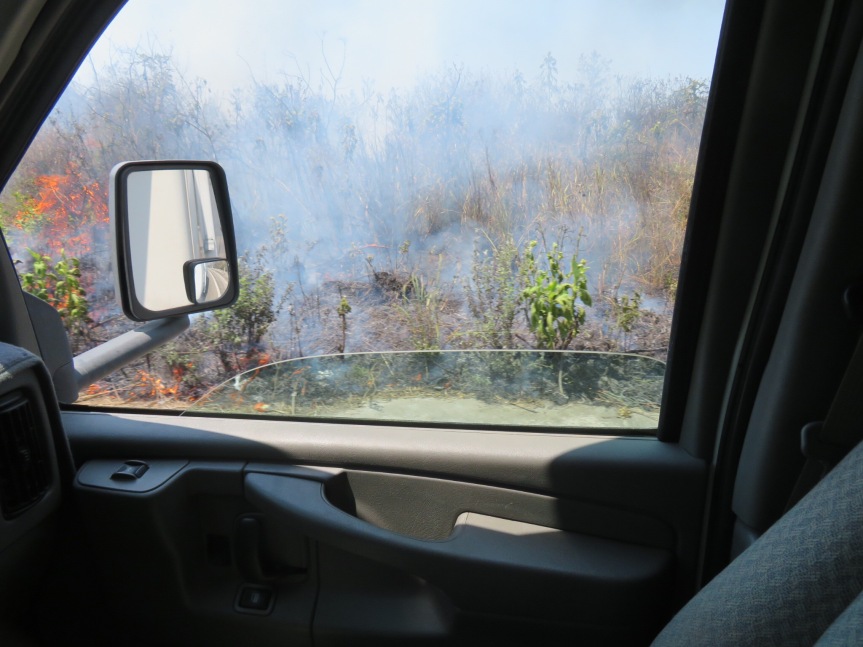 Worked my way through Tepic without any major stress and got on the toll road to Mazatlan. Easy flow with minor hills. I was able to use the A/C much to Cali’s relief. She’s not a big fan of the road noise. I don’t think she laid down the entire seven hours. Our only scheduled break was a quick rest at a truck stop outside of Acaponeta for a quick sand which and dog walk. Jammed down the highway keeping it at around sixty on the cuota listening to PJ’s playlist on the iPod. 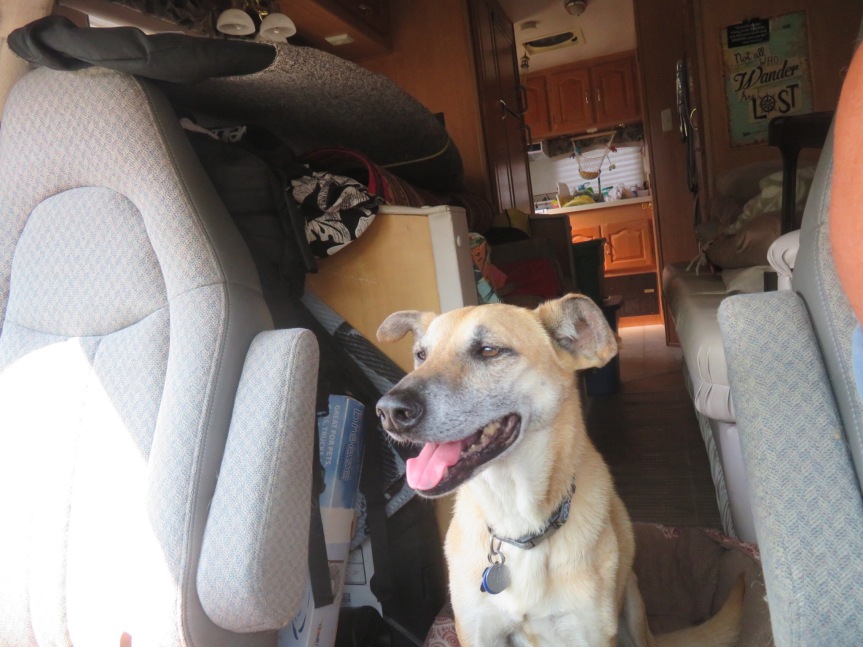 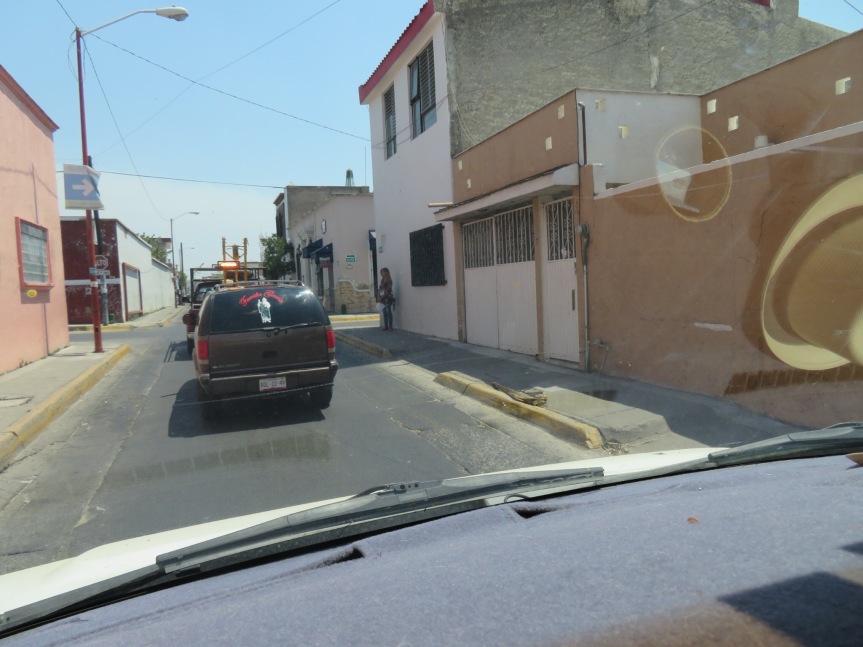 Our unscheduled break came about 45 miles before reaching Mazatlan. The TireMinder pressure monitor paid for itself today. The alarm started beeping and the screen said total failure. The pressure was down to 54 when I first looked, then seconds later it was in the 40s moving into the 30s. Shortly afterward, there was a small slightly level spot next to a trash can and SOS phone. I pulled off of the road and put out my goofy little soccer cones. I got busy getting off the spare and jacking up the RV at the rear axle. It was the inner rear tire, both tires would have to come off. I had to reposition the jack several times before I was comfortable that it would stay put. The first big truck that blew by sent the lightweight cones skittering into the bushes. I’d left the screen door open to allow some air to circulate for the pups and suddenly Cali was standing there on the side of the road with buses and semis roaring past. Got her back inside and finished up the tire change working extra fast at the moment of removing the inner dually and quickly installing the spare before the jack could decide to slip. Got it finished, then washed my filthy hands and piled my sweaty carcass back into the RV to continue the drive down to Las Jaibas RV park in Mazatlan. A bunch of flies had taken up residence in the motorhome while I was preoccupied with the tire. I spent the rest of the drive trying to shoo them out.

We left Lo de Marcos at 10:30 and limped into Las Jaibas RV park at about 5:30. Seven hours to cover a distance of 250 miles. The night watchman, Gennaro, was sitting at one of the outside picnic tables when I pulled up. I sat down opposite and took a deep breathe. He says that Rafa, the day guy, can arrange for a mobile tire repairman to come to the campsite. At first, he tried to hit me for 550 pesos for a spot. When I sat there silent, he said “well since it’s only you, we can do 350. I’m tired and I’m not going any further. 350 is okay. There is only one other camper in the park. An older lady with a spry little dog that sits in the big windscreen of her bus and barks at the outside world. Gennaro tried to put me in a spot right opposite them, but I moved a few more pads down the lane and parked it up and took the dogs for a tour of the empty park. They were extremely happy to be stopped.

I put them inside, then leveled the coach and hooked things up. A drive like today’s leaves me physically beat. I rinsed my road worn body off in the outside shower then jumped in the pool. Nice. Did some stretching in the water and soaked myself for a while. I got out and showered then walked down to the supposed restaurant down the street. Nothing but cold coconuts. I grabbed a few snacks from the Kiosko store (I call them que asco store) then went back to the rig and made dinner for everyone. I reheated the rice and pork chops from the other night and set the dogs up with a mixed bowl of their own. I pulled down a beach chair but didn’t unfold it right. When I sat down it collapsed depositing me in a heap on the concrete patio. Hope no one noticed. The little dog seemed be barking a bit more lively than he was the moment before. We sat on the slab as the sun went down slowly eating our food and being glad for one another’s company. We took another stroll through the grounds and I let them loose to chase the chakalacas. They had a blast.

We closed ourselves in and the dogs went down like rocks. Driving helps us all get a good night’s rest. 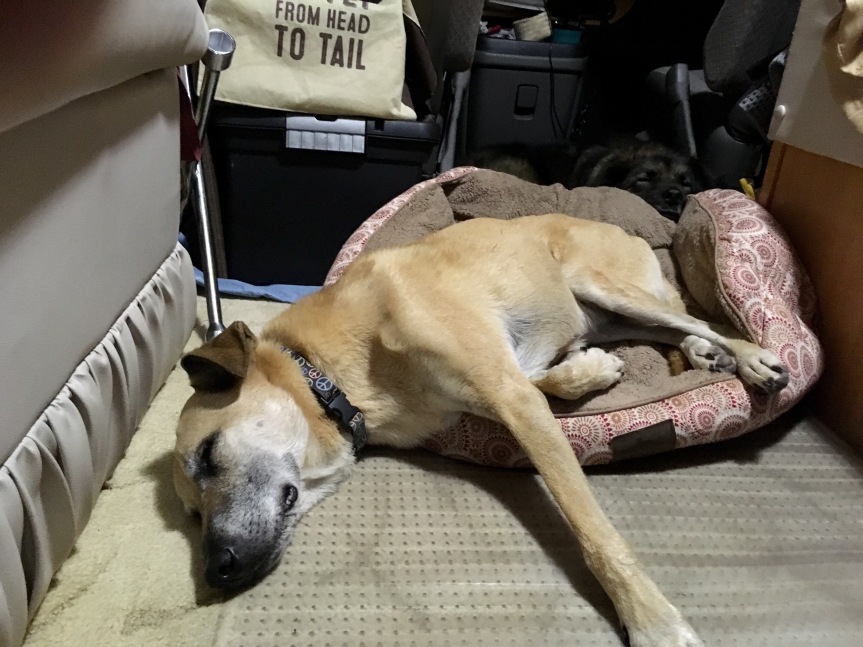 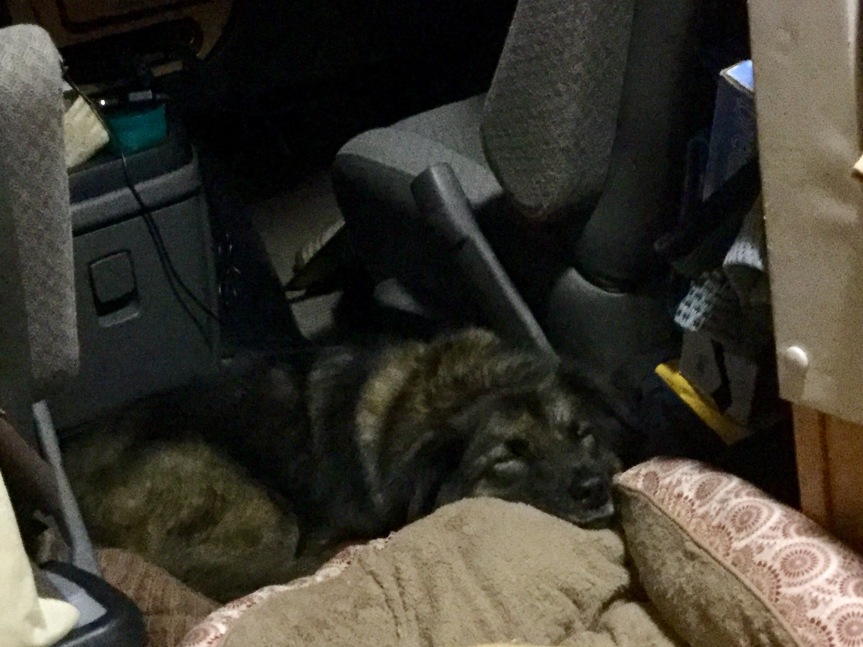