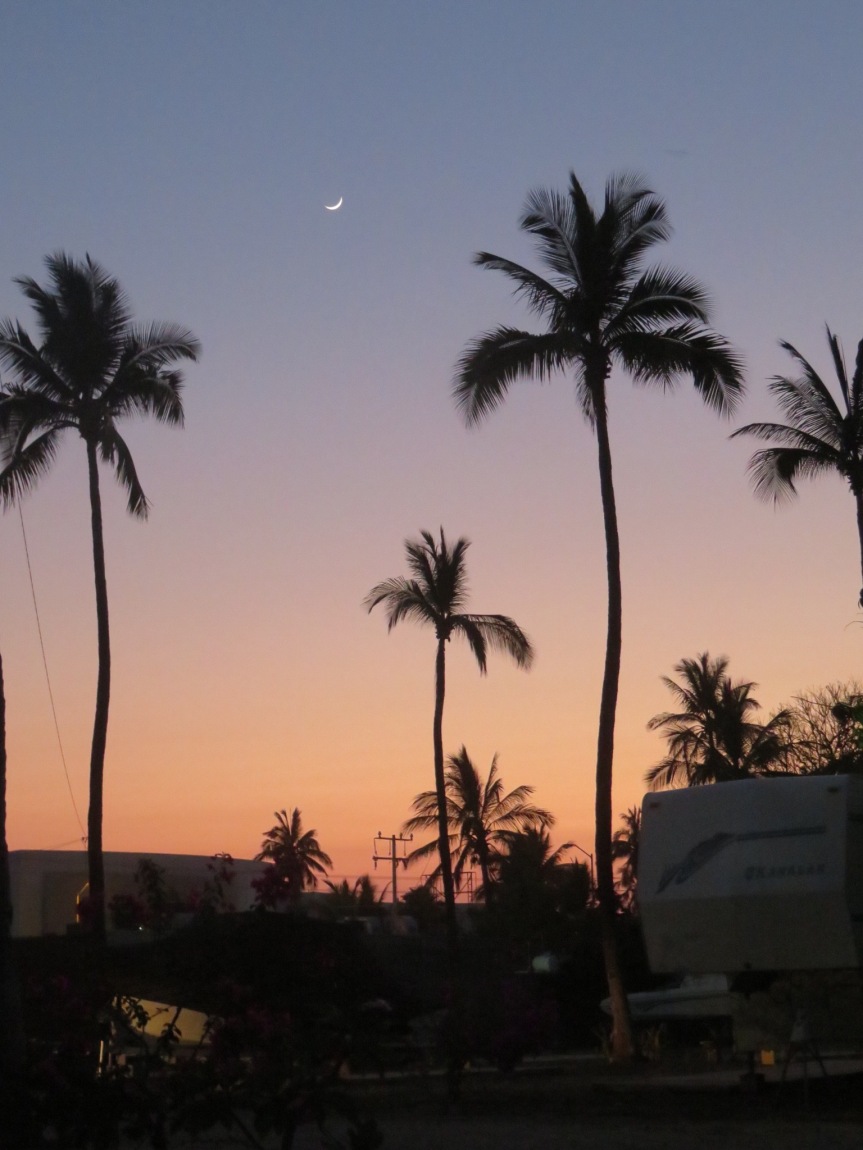 I poked my head out of the window to see the sun rising behind the campground. I laid around quietly for a while before finally getting up to take the dogs on a tour of the empty RV park. The compound is surrounded by forest on all sides. I was surprised to see deer on the other side of the fence. First a large one by itself on the north side of the facility and as we circumnavigated the perimeter of the camp, I saw three more smaller deer running off on the south side. There were more chakalacas awkwardly flying around.

We came back to the RV and sat on the porch in the shade watching the only other RVer in the park load up her four little dogs and pull out of Las Jaibas. Janice from Washington, a lady traveling solo, well if you call four dogs solo. Vaya con Dios. Rafa came by and said the tire guy would be here at around 9:30. I was just finishing my breakfast when he pulled in.

Martin aired up the offending tire and it was blowing air out of a big hole where the metal reinforcement was poking through the rubber. No repairing this tire. He pulled the spare from the inside dually position so he could move the long valve stem over to the tire. He called the shop and they didn’t have the Wrangler to match but they had a B.F. Goodrich that will work for a spare for 2500 pesos, about $135.00. I’m not driving without a spare and I’m not into running around Mazatlan looking for a better deal so I said do it. I needed to get more pesos, so I asked Martin if I could go along with him to get the tire and stop at a bank on the way. 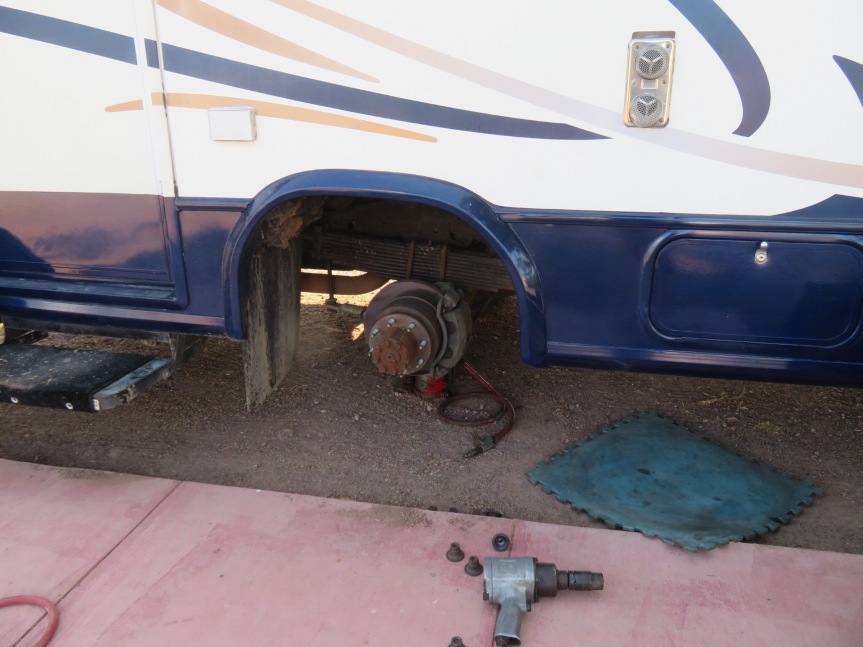 It was death race 2000, flying wildly through the roundabouts stopping at the last second if we needed to yield and barreling through if we didn’t. I reached for my seat belt as we were rushing madly down a narrow street with people stopping at the curb and us just barely fitting in the gaps. Unfortunately, the seat belt had given up the ghost long ago. I just sat back and took in the experience, like a ride at Disneyland. We stopped at the bank and I got a few more pesos trying to guesstimate approximately how much I need to reach the border. Don’t want to have too much left over when I hit the frontera. Then we arrived at the tire store and installed the new spare on the rim we had brought along. Then it was time to prove our manhood once again by going sixty in a thirty mph zone in a heavy truck with about 500,000 miles on the odometer. Slowing down or giving an inch would bring shame upon the family name. 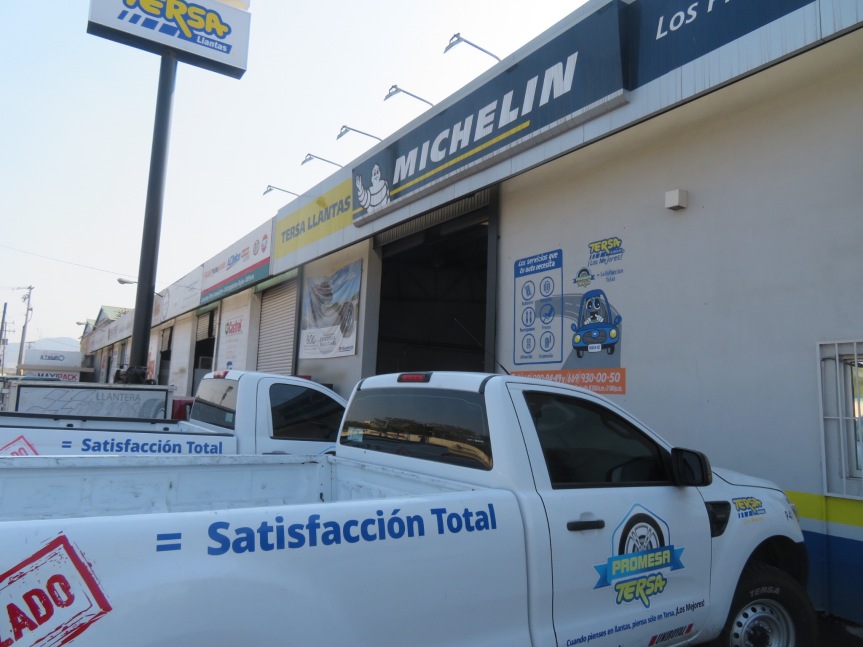 We survived the return ride and switched out the long valve stem and replaced the duallys. Martin would ratchet it down for about a solid 30 seconds after it was tight with his air driver. I’ll probably never get these puppies off again if I have a flat. He was able to get the one mounting bolt for the spare tire hanger that was loose to tighten up so all four are once again sharing the load. I’d tried and failed before. Good job Martin. The labor and on site visit came to 450 pesos, a little less than $25. The Uber ride to the bank would have been about that at home. 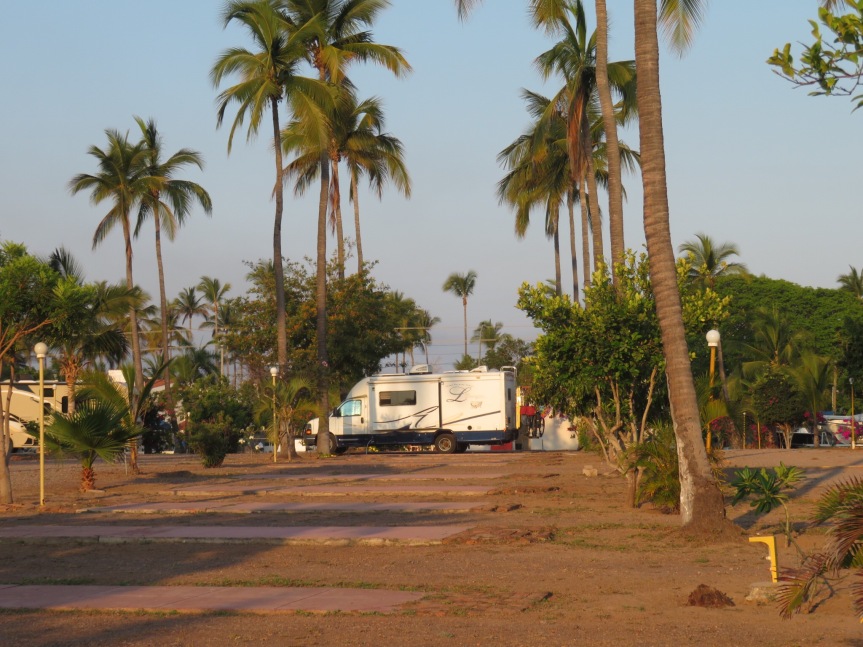 I threw my clothes in the wash since I’d gotten the shorts extra dirty the last few days. Rafa came over to give Lexi a bath so I walked over to the little stand next to the Kiosko and got some tacos. I sat there on the busy road and read a magazine Shannon had left me to kill some time. There’s not much in the way of charm in this neighborhood. A giant high rise and walled compounds block any view of the beach and the road and sidewalk are littered with garbage and a large accumulation of scruff that has fallen from the dry trees.

I went back to the campground and sat outside working on some photos with the computer. The owner’s kid came to oversee Rafa’s work. He sat at a table looking put out and staring at his phone the entire time. I paid up my rent for the night and he collected the payment for washing Lexi. It doesn’t go to Rafa. Kind of sucks. At Mar Rosa and Cruz Maria, the workers come and do it after hours and earn extra money, probably a couple days pay in a few hours, but here management takes it and says his salary is for all he gets when doing side jobs. I gave him some extra for doing a killer job, even down to the shiny Armorall job on the tires. Best Lexi’s looked in ages. It will all be erased by the time I reach Los Mochis tomorrow, but she stands out today. 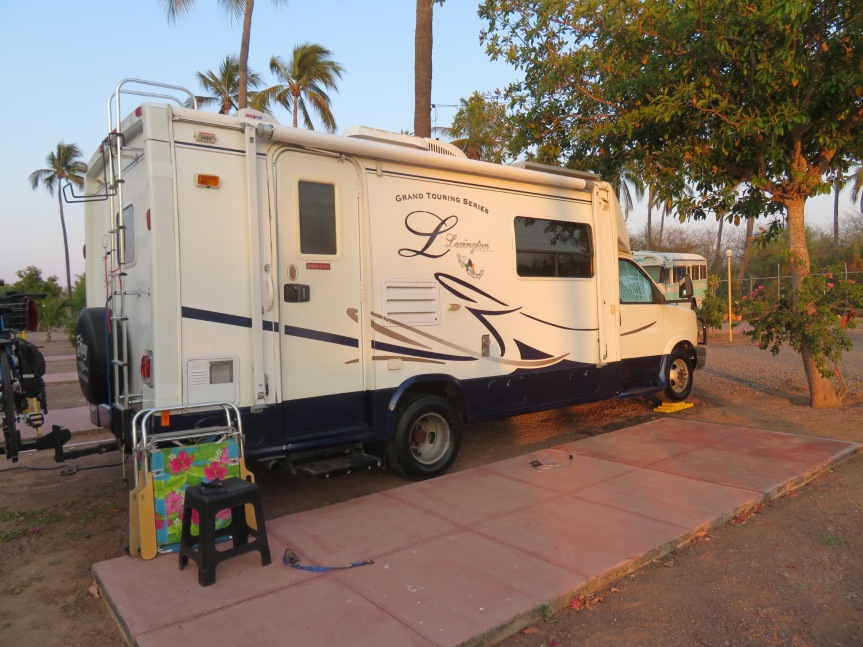 I moved inside to lounge in the cool air while waiting for the late afternoon to go for a swim. When I finally stepped out to grab my trunks, I was confronted by a large tour bus outside that had brought a load of people from Torreon to have a pool party at Las Jaibas. The Cumbia was clopping and the pool was full of inland folks. So much for my serene session in the swimming pool.

Walked the dogs, then started stowing stuff away. Made us all dinner and we sat on the slab watching the visitors dancing around the deck. Pretty mellow group looking like they are having a lot of fun. As the sun faded into darkness, they all piled on the bus. The boom box man waiting until the end to turn it off and stow it below. Then they pulled out and it was just me and the night watchman. I introduced myself, then retired to the RV.

Just as the day’s post was done and I was turning out the light, I was rocked by intense explosions from outside. The tower hotel across the street was blowing off some serious fireworks in honor of it being Saturday night. I stepped outside to watch. They were only yards away and seemed to go on forever. I knew what I’d be getting when I went back inside. After a time, they finished up and went in to the panting, sketched out dogs. They actually weren’t all that bad. I gave them an anti-anxiety pill each and they calmed down pretty quickly. Lots of music and noise. Think I’ll run the fan for white noise.